All About The Art 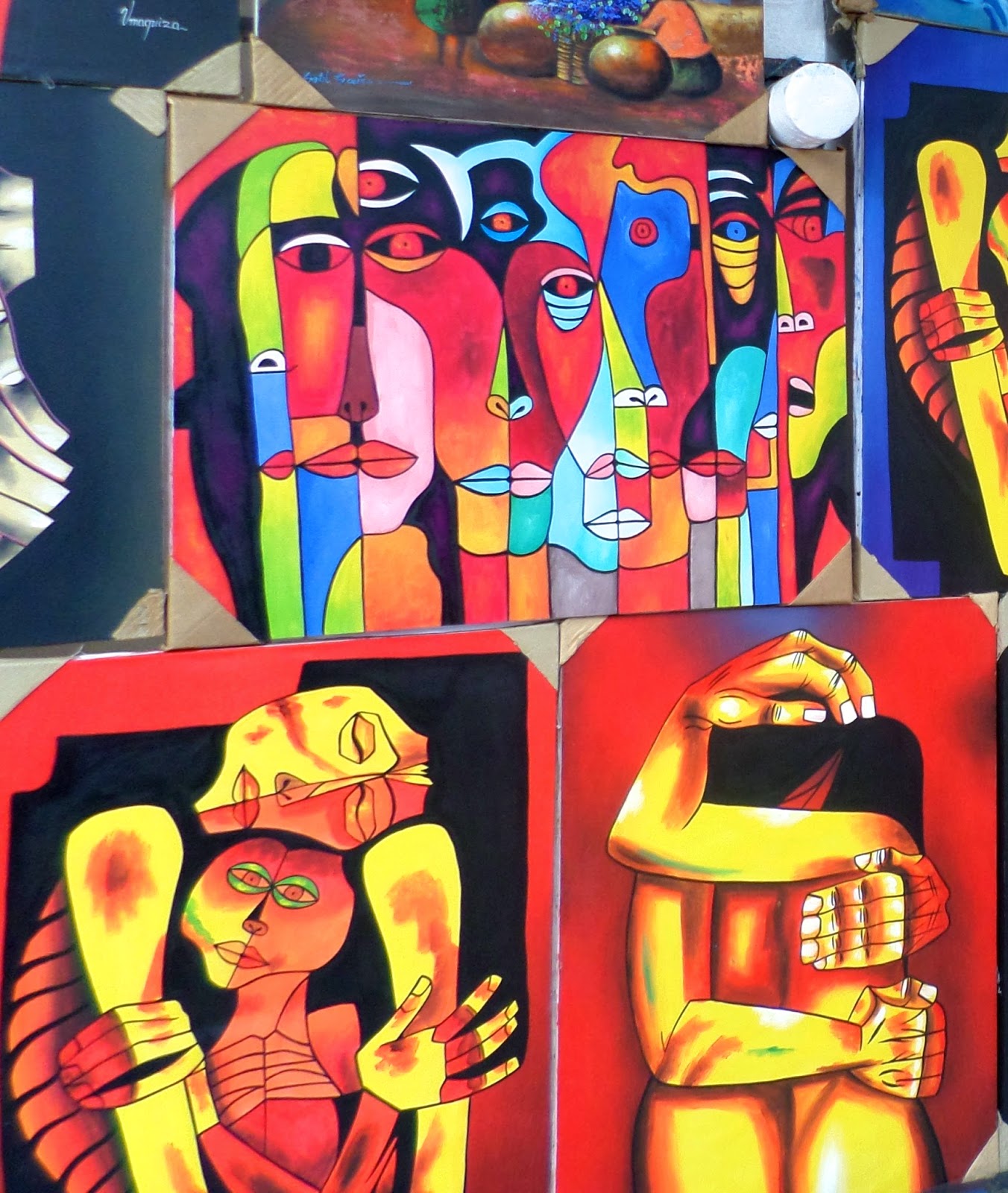 When I first came to Ecuador I had no clue who Oswaldo Guayasamin (pronounced wire-sam-in) was until one of my Ecuadorian friend's and my Spanish teacher recommended that I visit his house which has been converted to a museum, in order to learn more about his life and work. He was a great Ecuadorian artist and humanitarian and some of his art work depict the injustices he witnessed. You can read more about him here.

Today I finally got to visit Guayasamin's house and I am very glad that I went because now I have new appreciation for his work especially after having guides explain his work and his life. I took a taxi to the house which wasn't too far from my school and paid the $6 entrance fee which included entrance into his house and the chapel next to his house.

The house was FABULOUS!!! this man was certainly not a starving artist for sure. I didn't know photography was not allowed in the house so I managed to take a few pictures before I was politely alerted not to. In the house we were shown his numerous art collections, his personal belongings, a video of him talking about his work and we also got to see some of his actual work. We also got to check out the dining room where he dined with the likes of Fidel Castro among other high profile personalities. 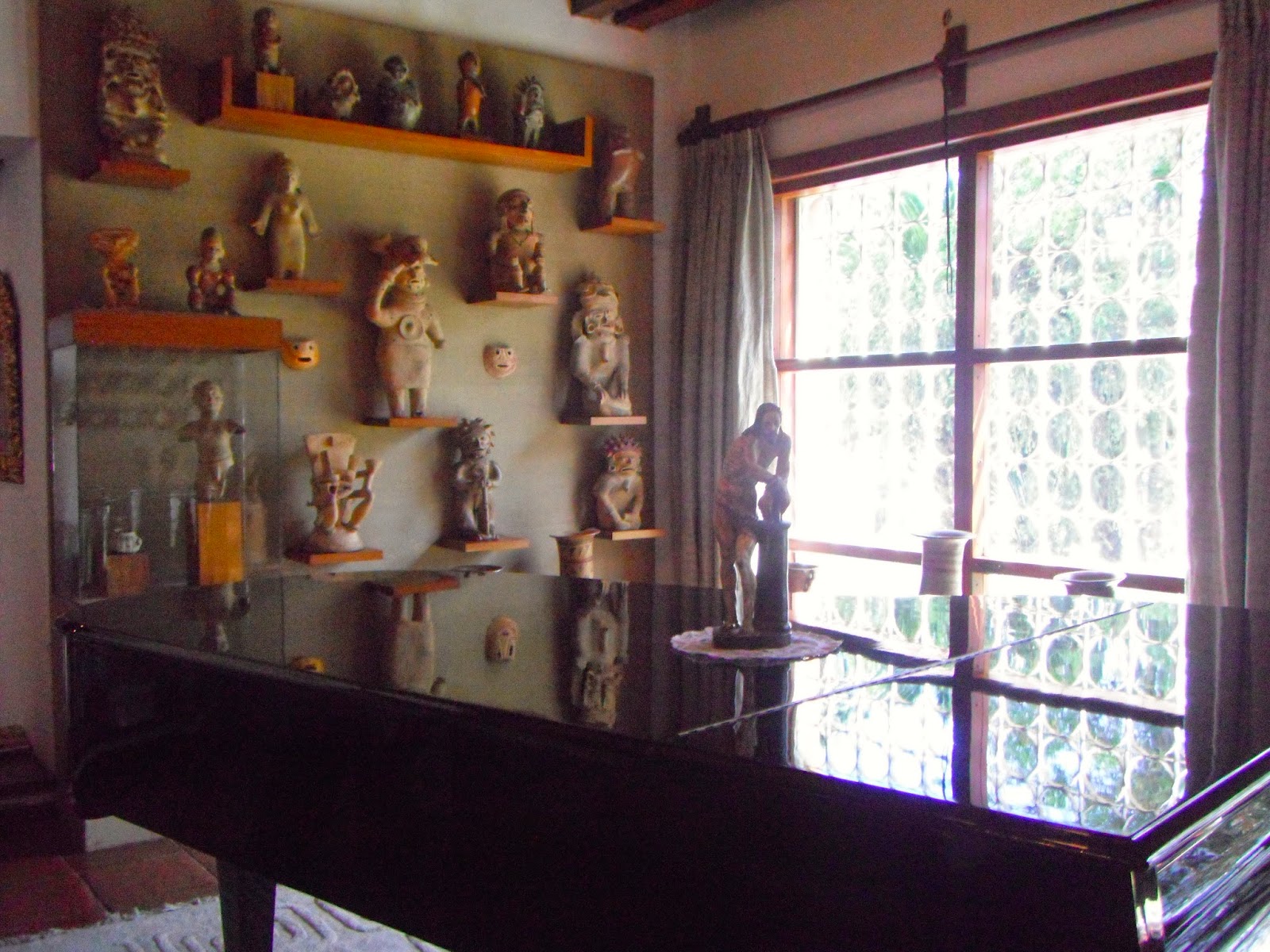 Guayasamin was not a religious man but he appreciated the work that went into creating some of these religious figures so he had quite a collection of them. 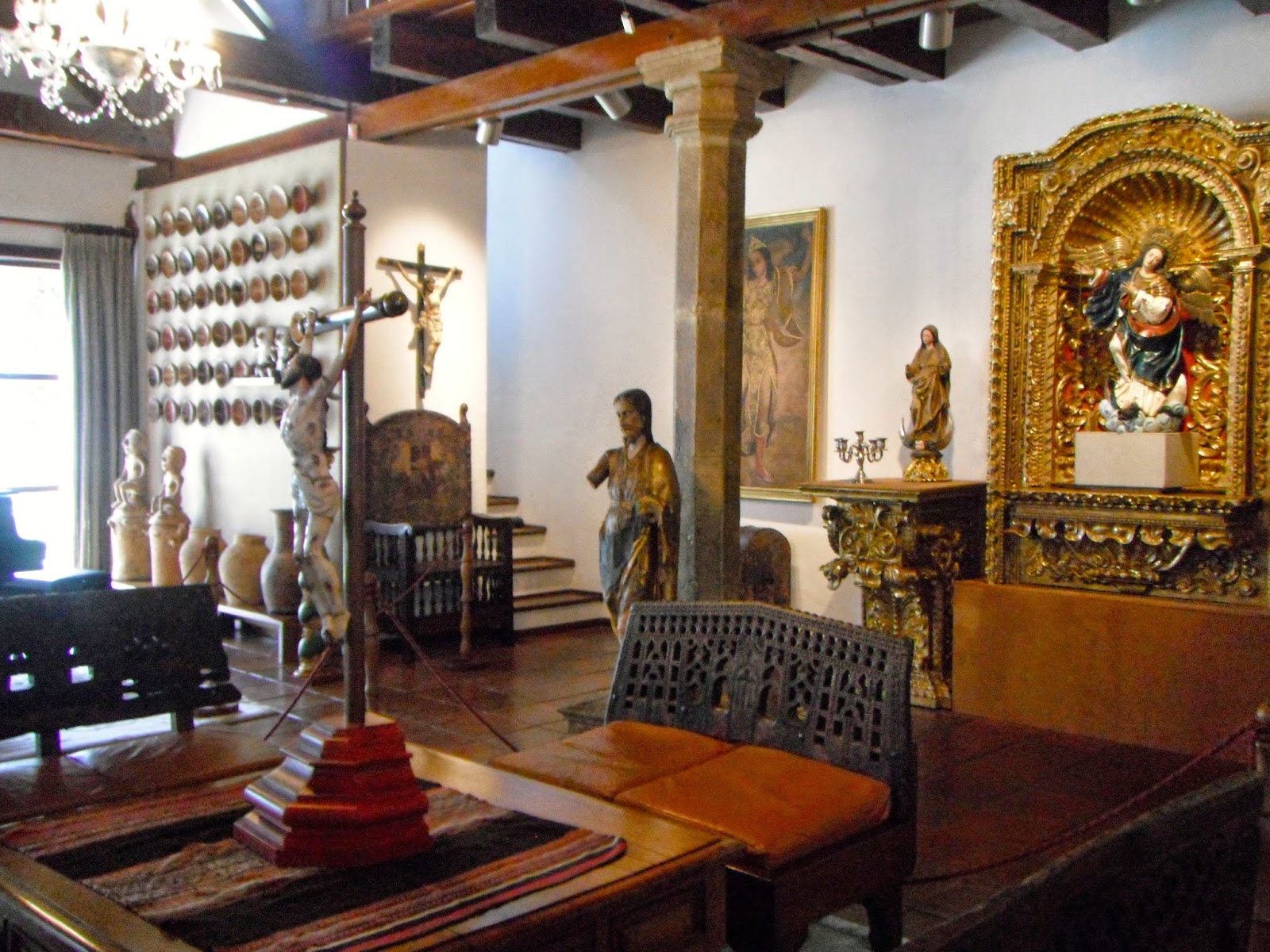 Hallway leading out to the veranda. 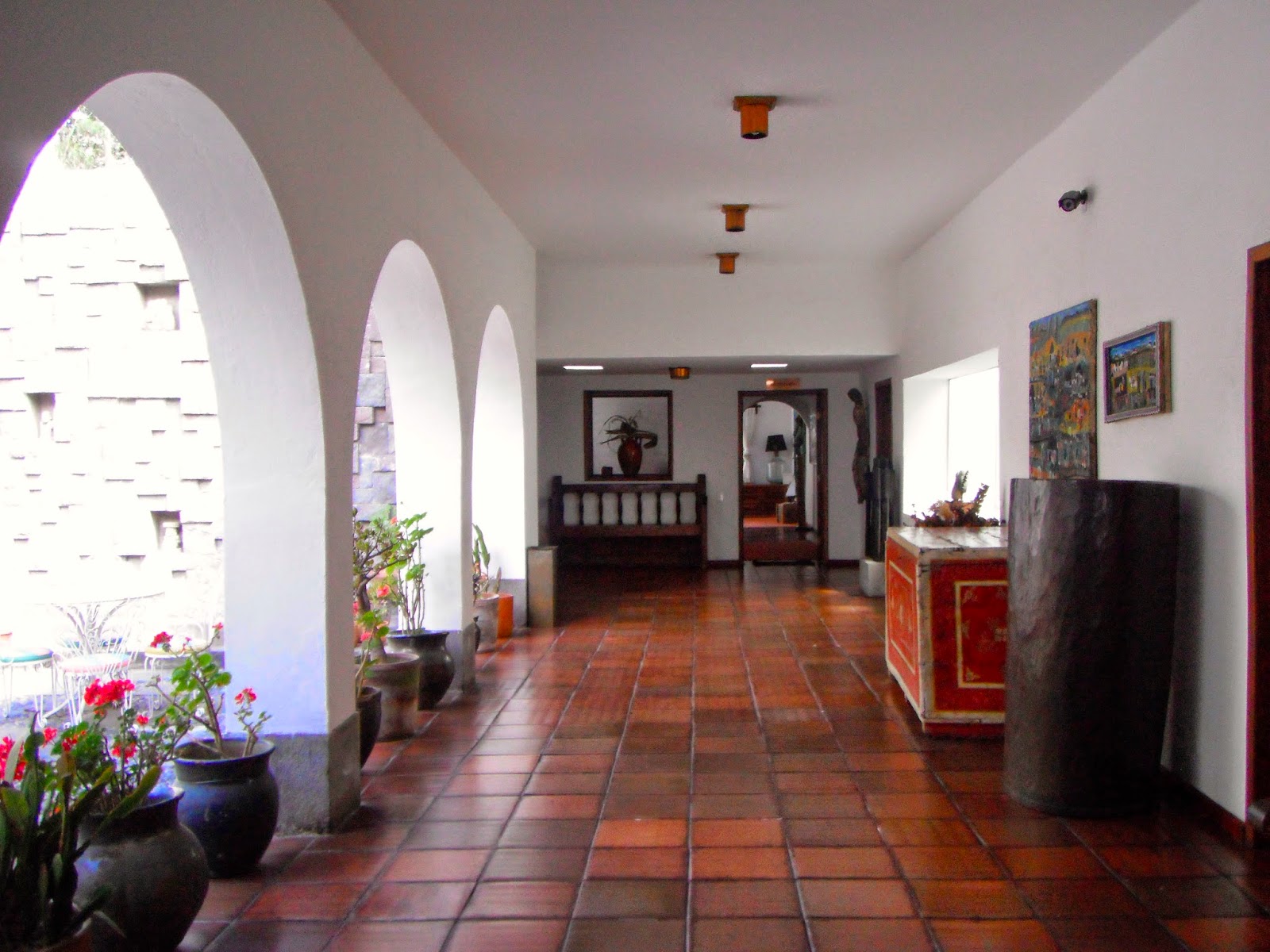 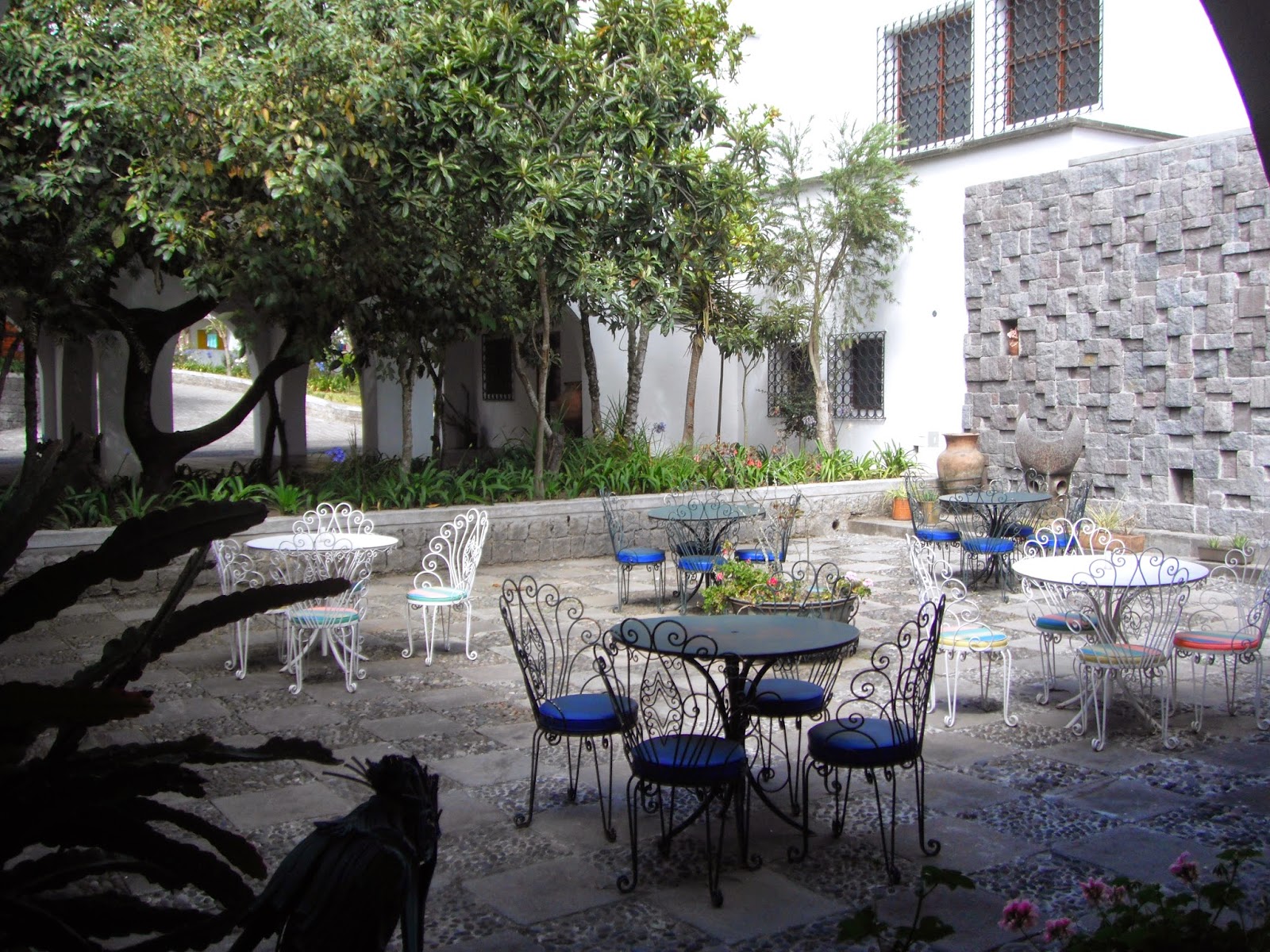 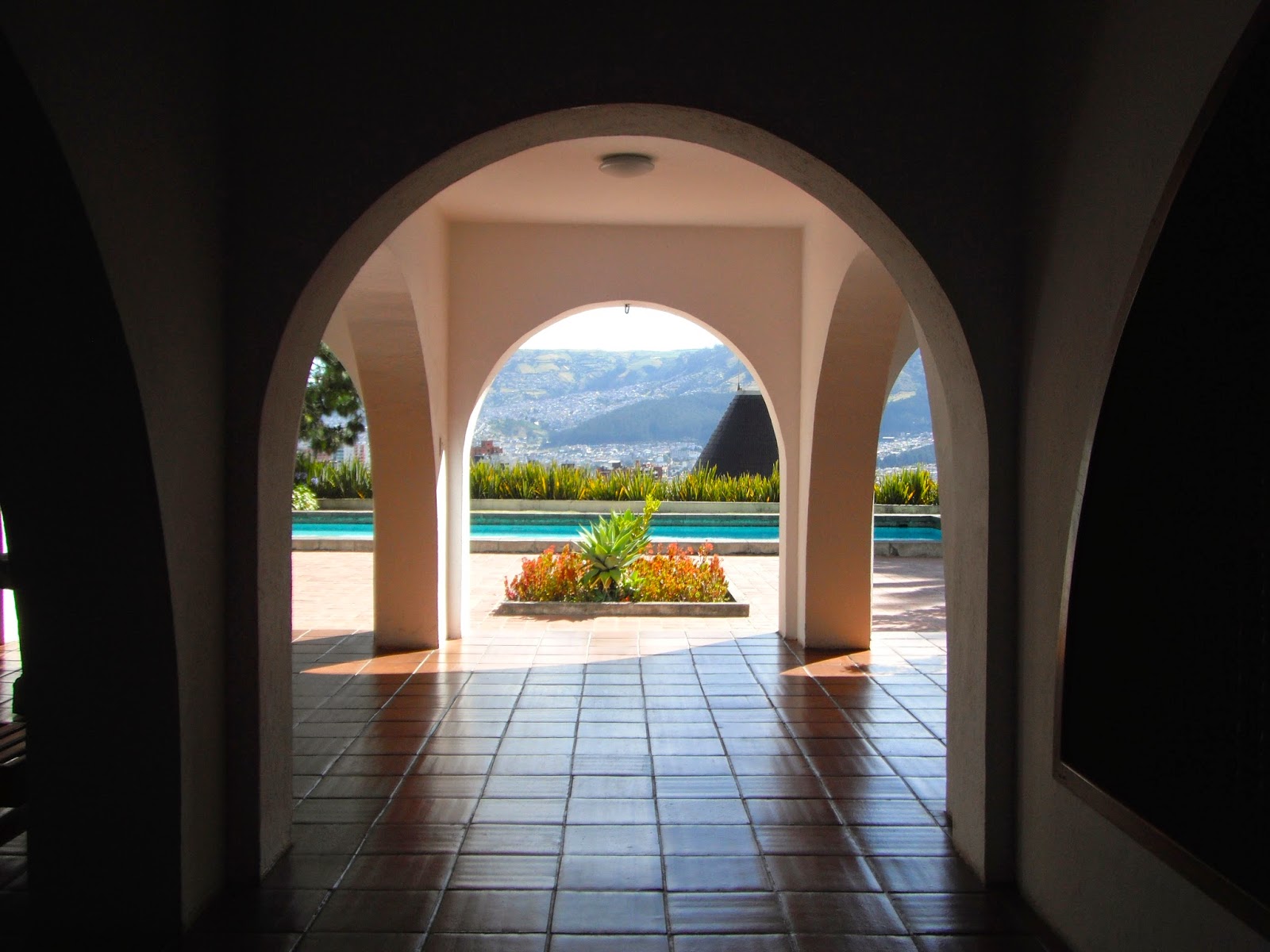 The tree of life, this is where Guayasamin and his best friend's ashes are buried. The tree is right in front of his house overlooking an incredible view of Quito. 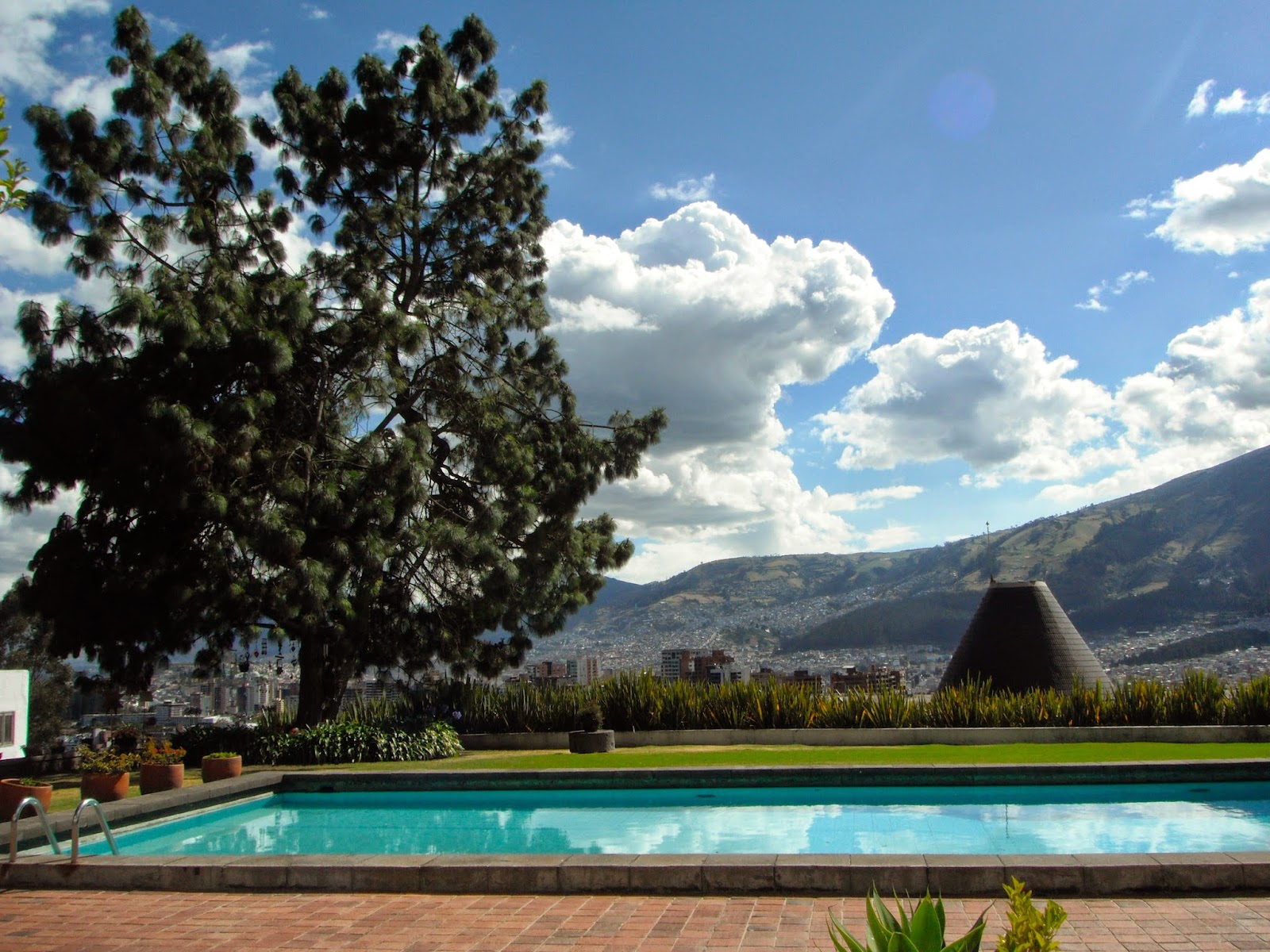 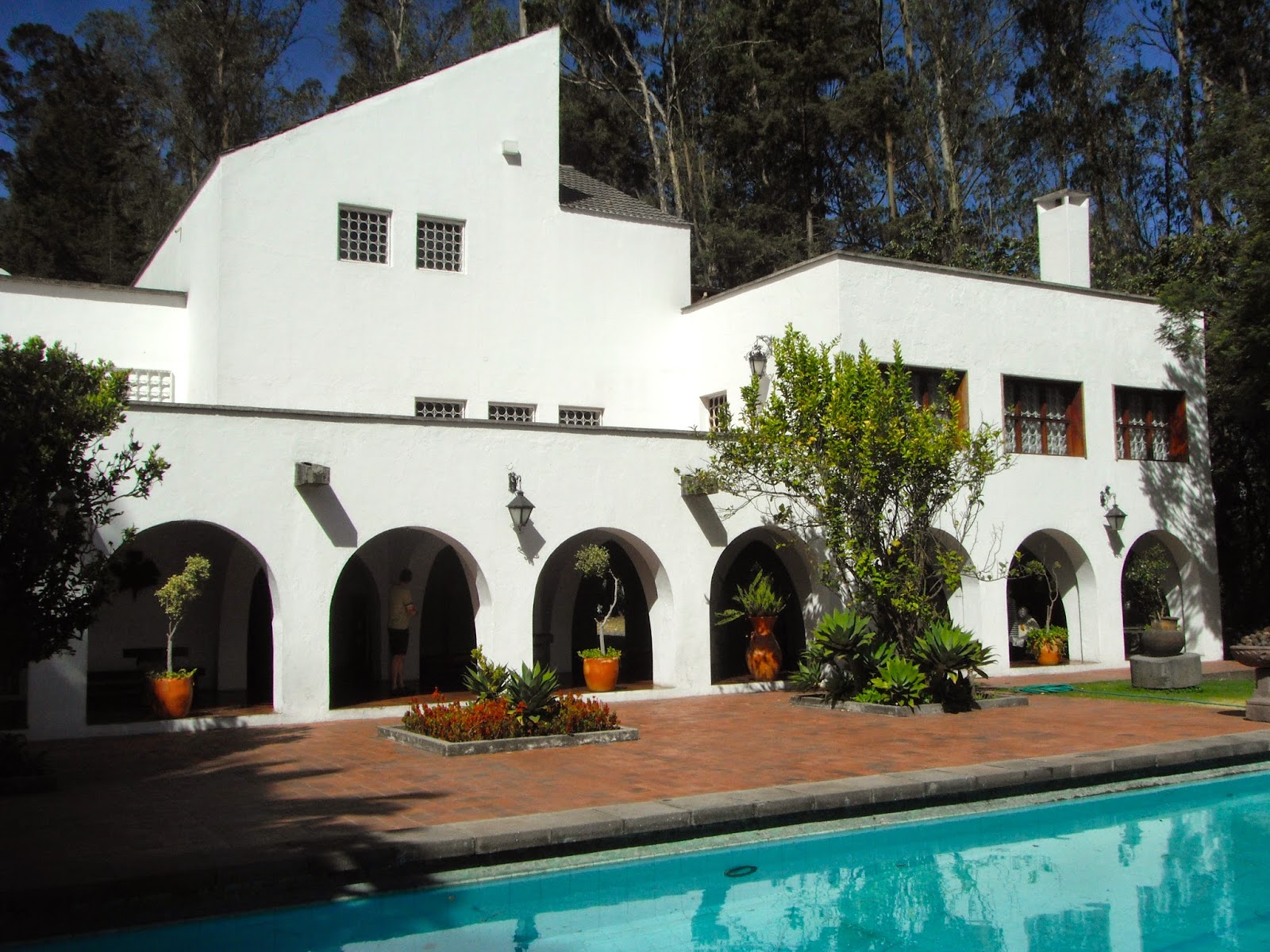 Next to the house is the Capilla del Hombre (chapel of man) which pays tribute to humanity. Pictures were not allowed inside the chapel but you could take pictures outside. Inside this chapel I saw so many of his paintings and thanks to the Guide inside I was able to learn so much about his work and the meaning behind a lot of his paintings. It was very interesting and definitely something worth checking out. 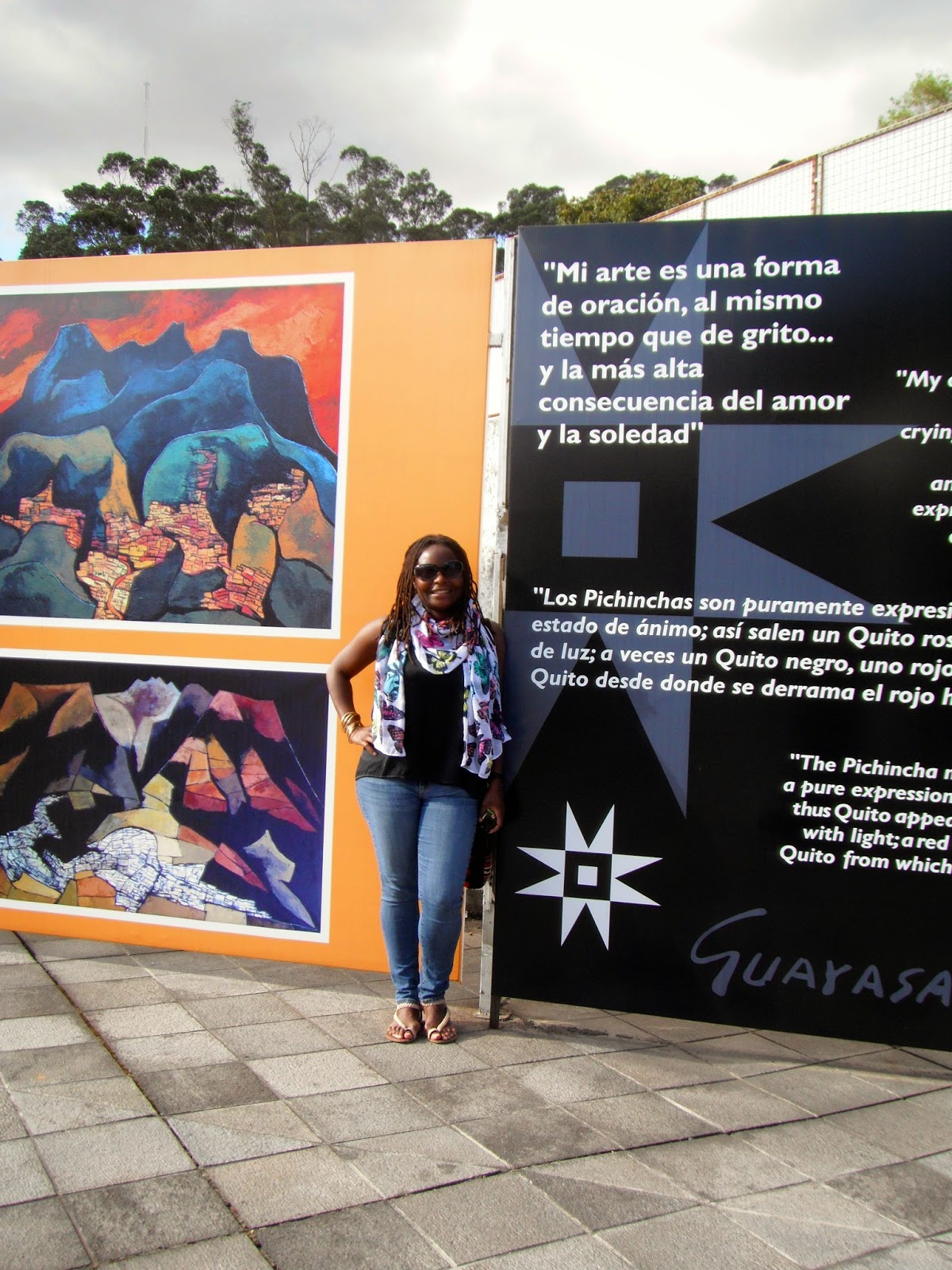 To the left of the picture is his house and to the right is the chapel. 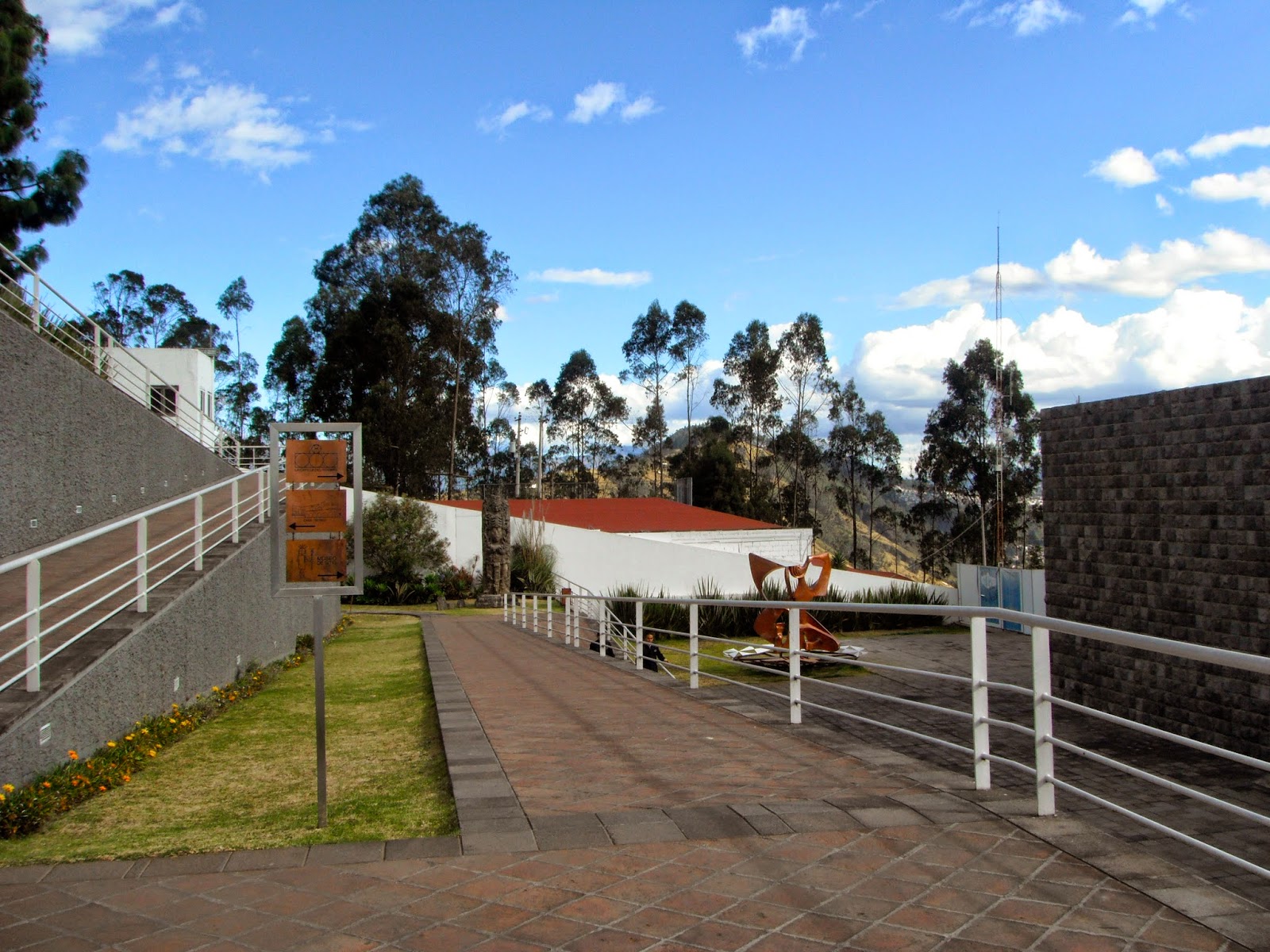 That's it folks, I don't know much about art and prior to visiting Ecuador I had no clue who Guayasamin was but I am glad I got to learn about him and his work. It definitely was worth it.

Whenever I am walking with my Roommate I notice we get a lot of stares, we both have our own theories about this. He thinks the men are checking out my chest and he is always shocked at how blatant they are but I think they are just looking at us because they assume we are an interracial couple and you don't see a lot of that in Quito. I would rather stick to my theory.

It's summer here and the sun can get pretty hot. Granted, the heat is bearable but dang! my forehead has been bearing the brunt of those sun rays. Maybe I should be wearing a hat daily.

Today at the museum of Guayasamin there was this older American woman who had a shitty attitude toward the guard at the main entrance. She didn't speak Spanish and she was acting like the guard should bend over backward to accommodate her. For crying out loud, you are in this guy's country where Spanish is the main language what the heck do you expect? she made it seem like it was ridiculous that the guard could not speak English. Really? I get so annoyed by such people.

On my taxi ride back home I got to chatting with the taxi driver, a young guy who didn't look more than 25 years old. He told me he studied digital communication at the University and graduated, he worked in advertising but it didn't pay much so he decided to drive taxis because the money was better. Chatting with taxi drivers I always enjoy learning something about their personal lives plus they always give me good tips about the city. At the end of my ride he gave me his card and told me to call him anytime I needed a taxi. I think I just found my main taxi guy and I certainly don't mind giving him some business, he was such a sweet kid.

My weakness just caught up with me, I discovered this really cool clothing store which has the cutest tops and the best sale going on right now. Ahem! I have made quite a few stops and bought a few tops but the good thing is, I haven't broken bank so that's what keeps drawing me to the store. Those 70% discounts just keep calling out my name every time I pass by and I can't resist.

Lesson learned, I will never venture into any barrio in South America that's located up a hill. I will look from afar but I will not be caught dead near these neighborhoods. In most cases this is where the favelas are located and these neighborhoods are not the safest, I am not being a snob just being very cautious. After my ordeal in Guayaquil can you really blame me?

Speaking of favelas, I was just thinking how in the US houses located up a hill overlooking the city would be expensive because of the amazing views but in South America this seems to be quite the opposite. Let me not generalize the whole continent so i will say from what I have observed so far in some of the cities I have visited in South America.