This morning I took an early morning bus to Mindo, a small town that is about 2 hours away from Quito. I had heard about how pretty it is and figured it would be worth checking out for a day or two as a weekend excursion from Quito.

I had to take the bus from the north terminal, Ofelia. The ride only cost $2.50 and It was a smooth ride all the way to Mindo. I had decided that I would spend a night in the town then head back to Quito tomorrow morning so I wanted to maximize my time in Mindo. As soon as I got to my hostel and got myself settled, I was ready to begin my explorations. My first stop was trekking the cascades route.

I was joined by two American brothers who were heading to the same location and this helped with transportation expenses because we were able to split the cost among us. We got a taxi for $6 total and it dropped us at the location where we would begin our trek.

First we had to take some form of cable car to get to the beginning of the walking trails that would take us to some of the cascades around the area. From the picture below you can see how we were transported. 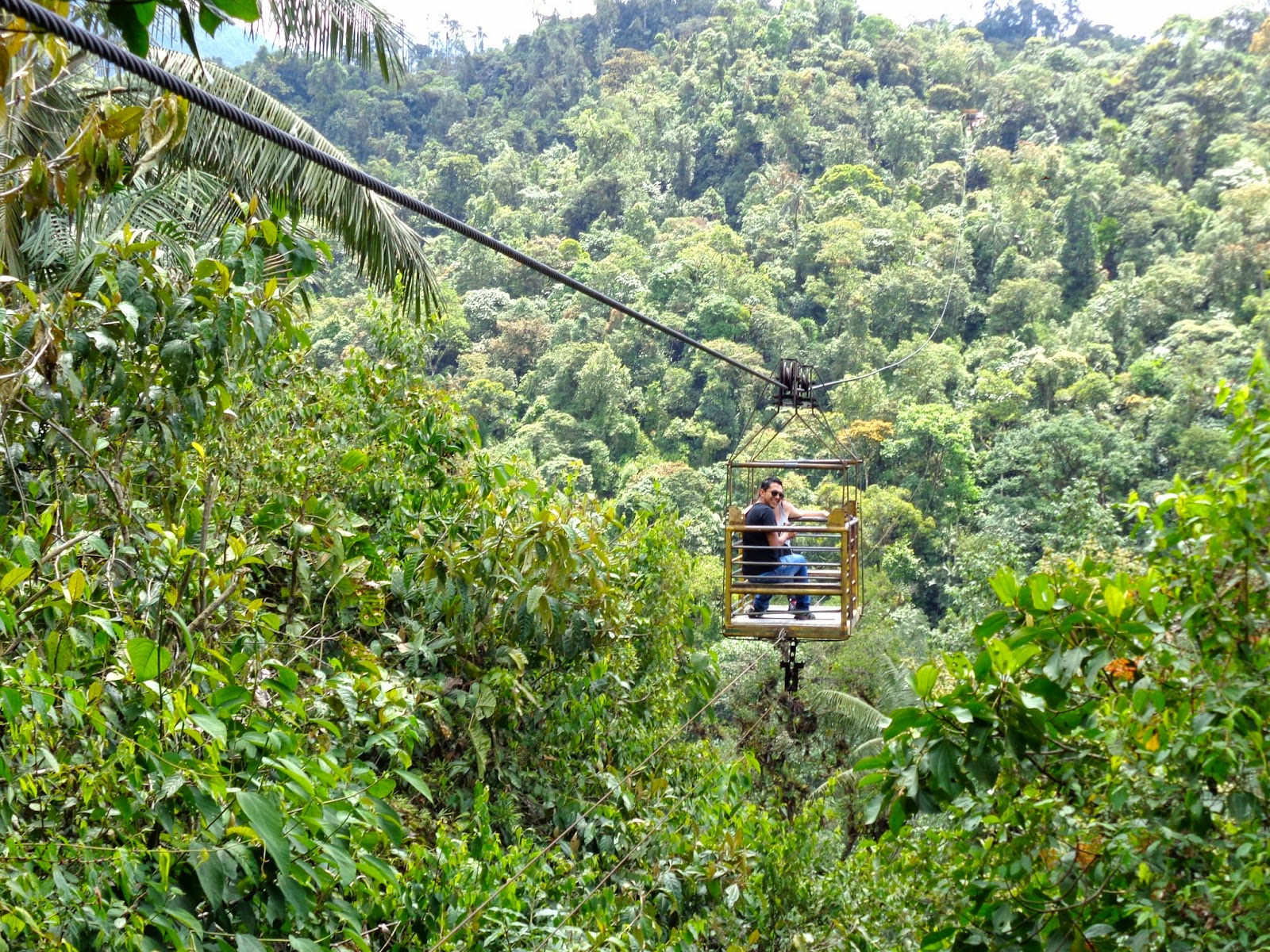 The cable ride was really cool, at first I was a bit nervous because looking down I could see how high up we were but once the ride started it was really cool! it was moving pretty fast it felt like we were flying, for all I know maybe it wasn't that fast but it sure felt like it. 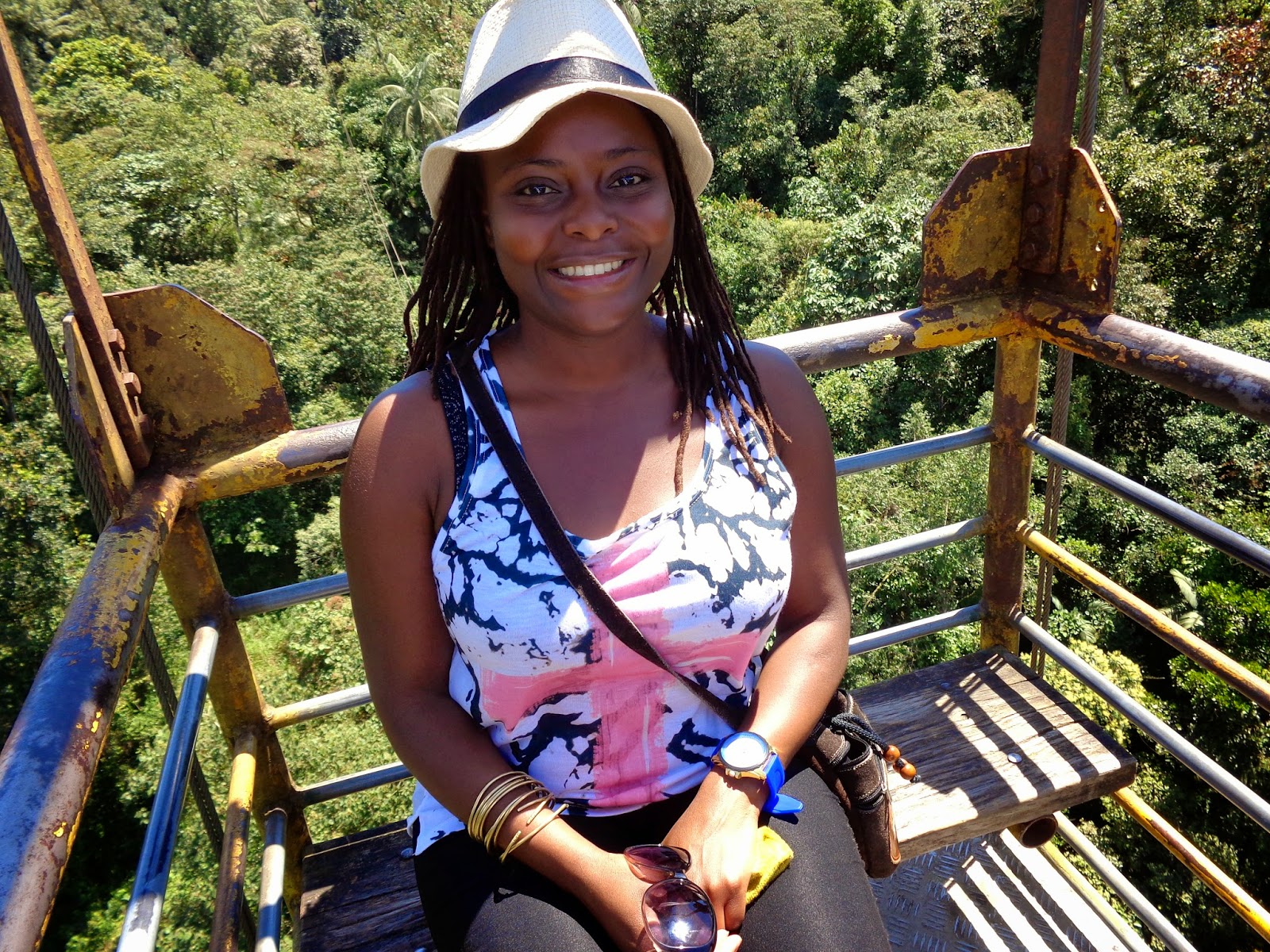 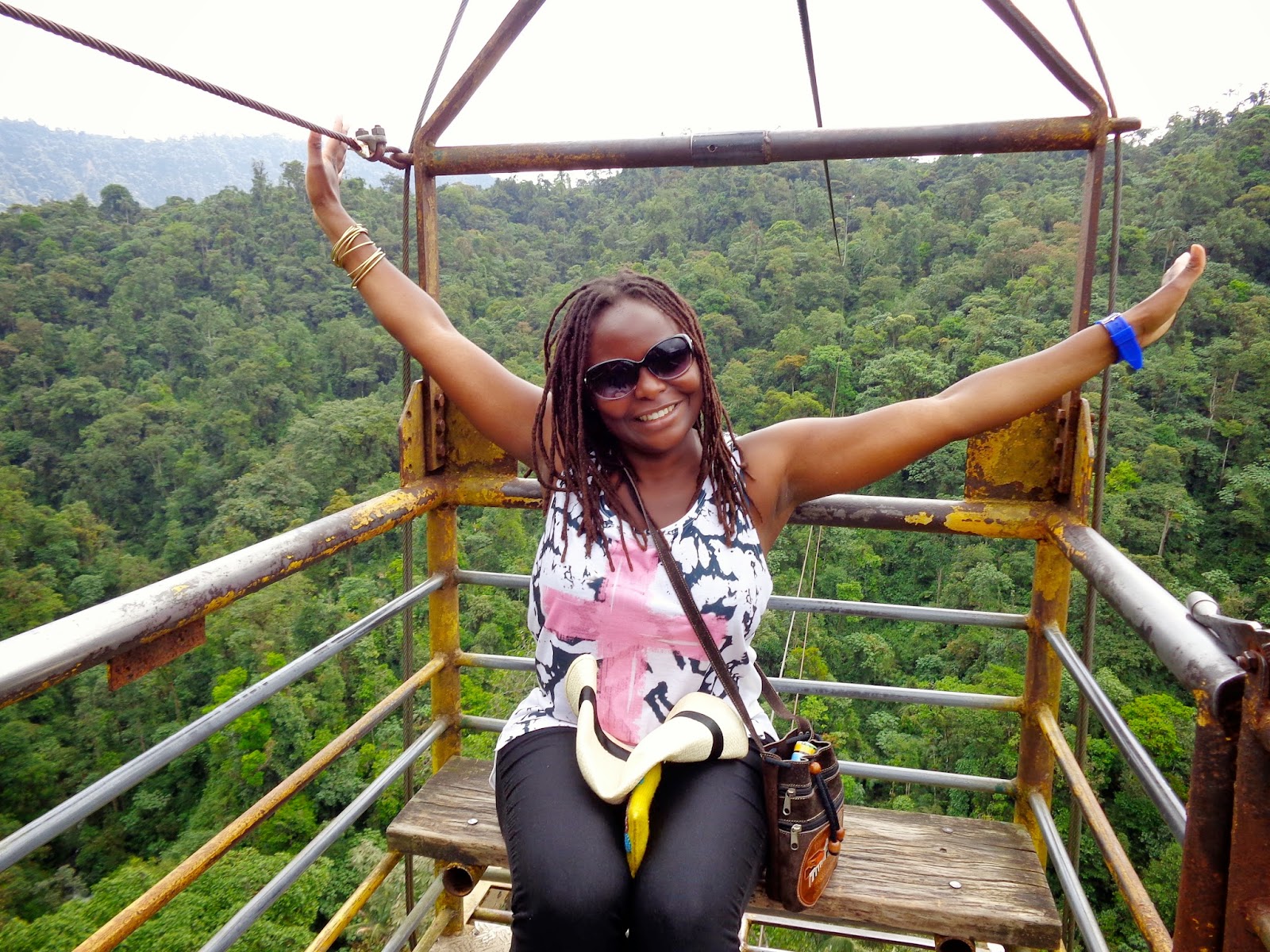 Armed with a map showing the trails that would lead us to different cascades, we started our adventure. The picture below shows how the trails looked like, we were surrounded by trees and that helped keep us cool because it was hot and muggy. 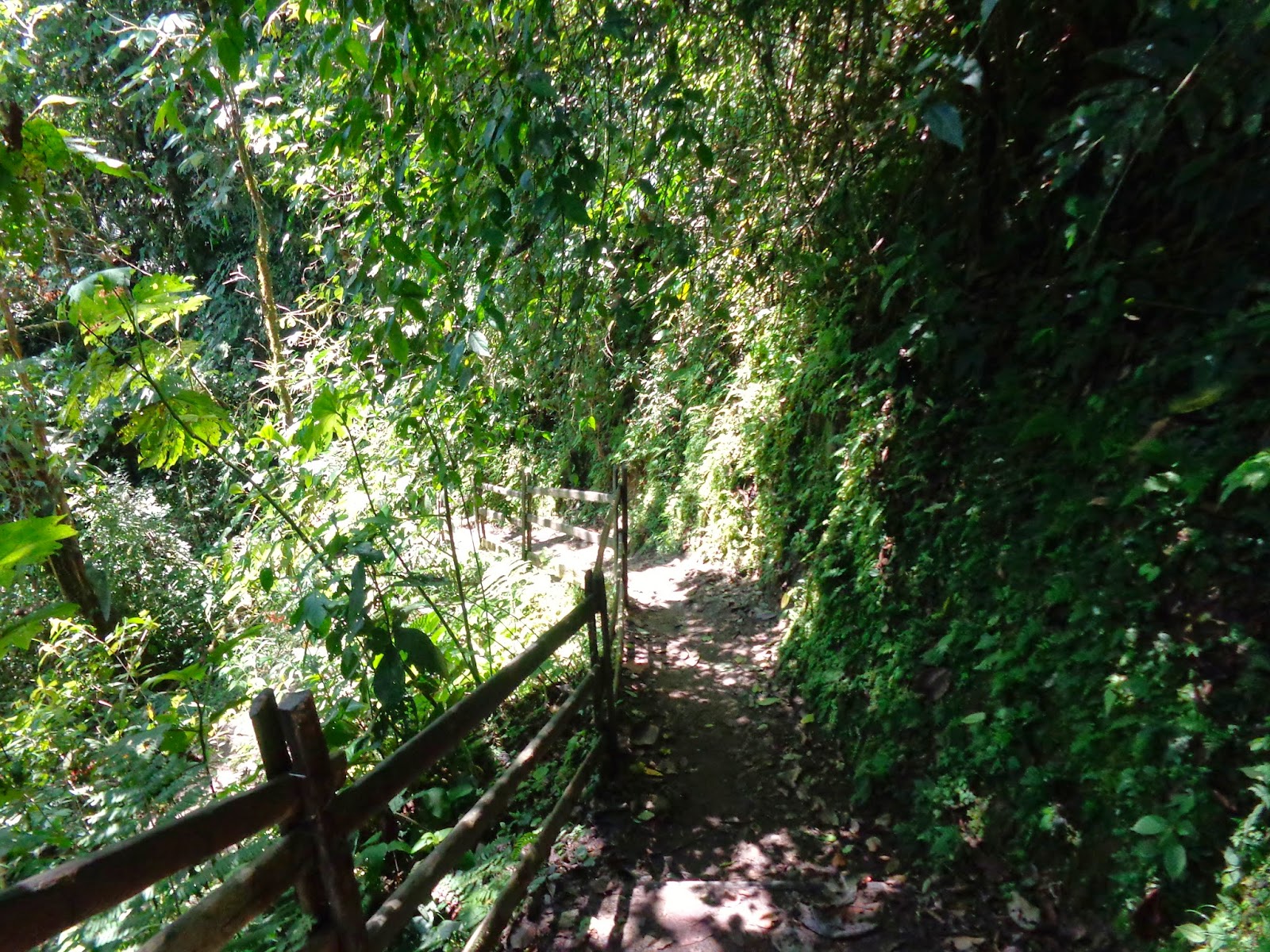 The trails were very well marked and it was pretty easy to make our way around the area, we hit our first cascade where we were able to cool off a little before continuing on to the next. 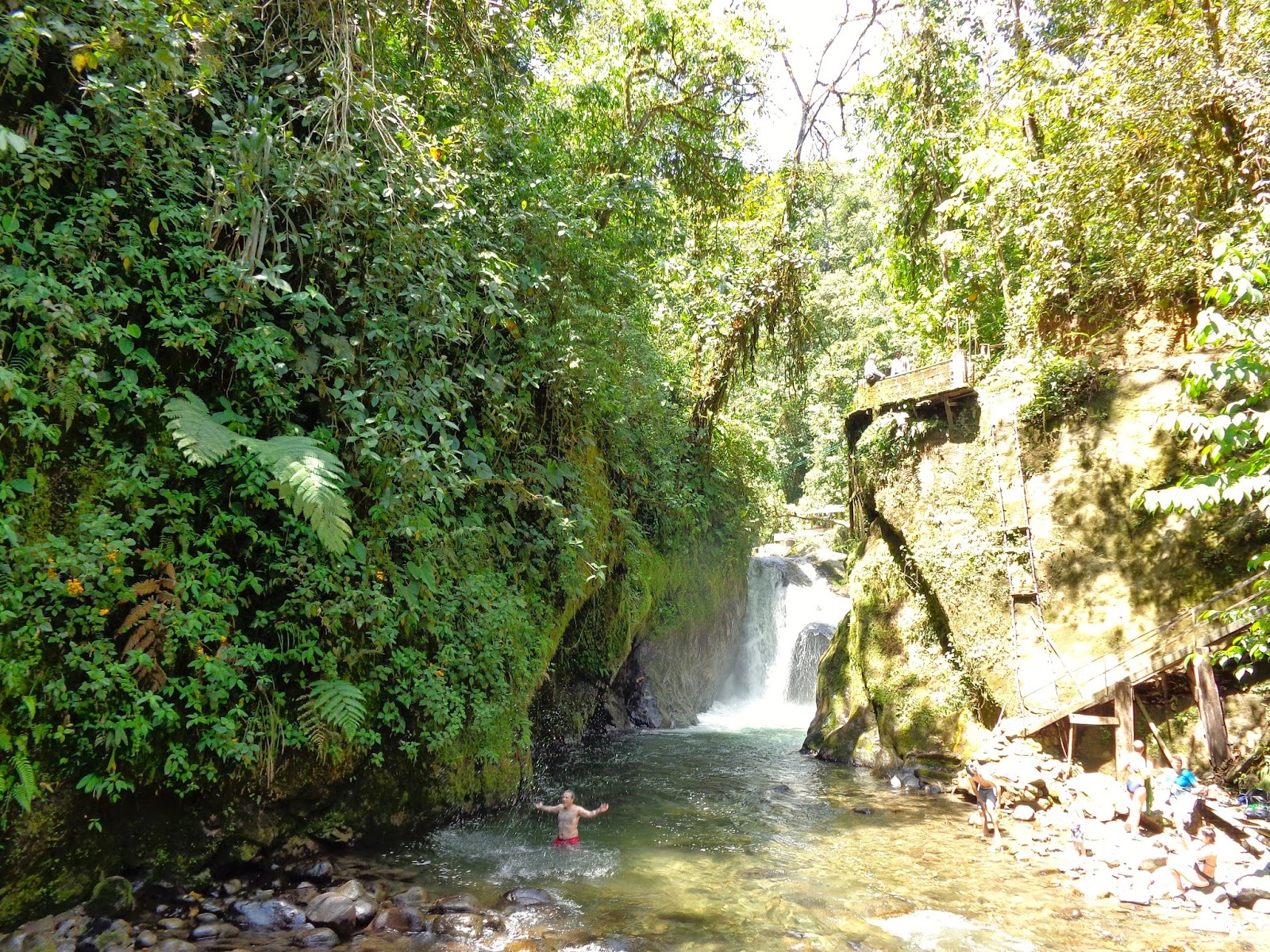 I thought this second cascade was more beautiful the water had this bluish/greenish tint at the base which added to it's appeal, the picture doesn't really do it justice. 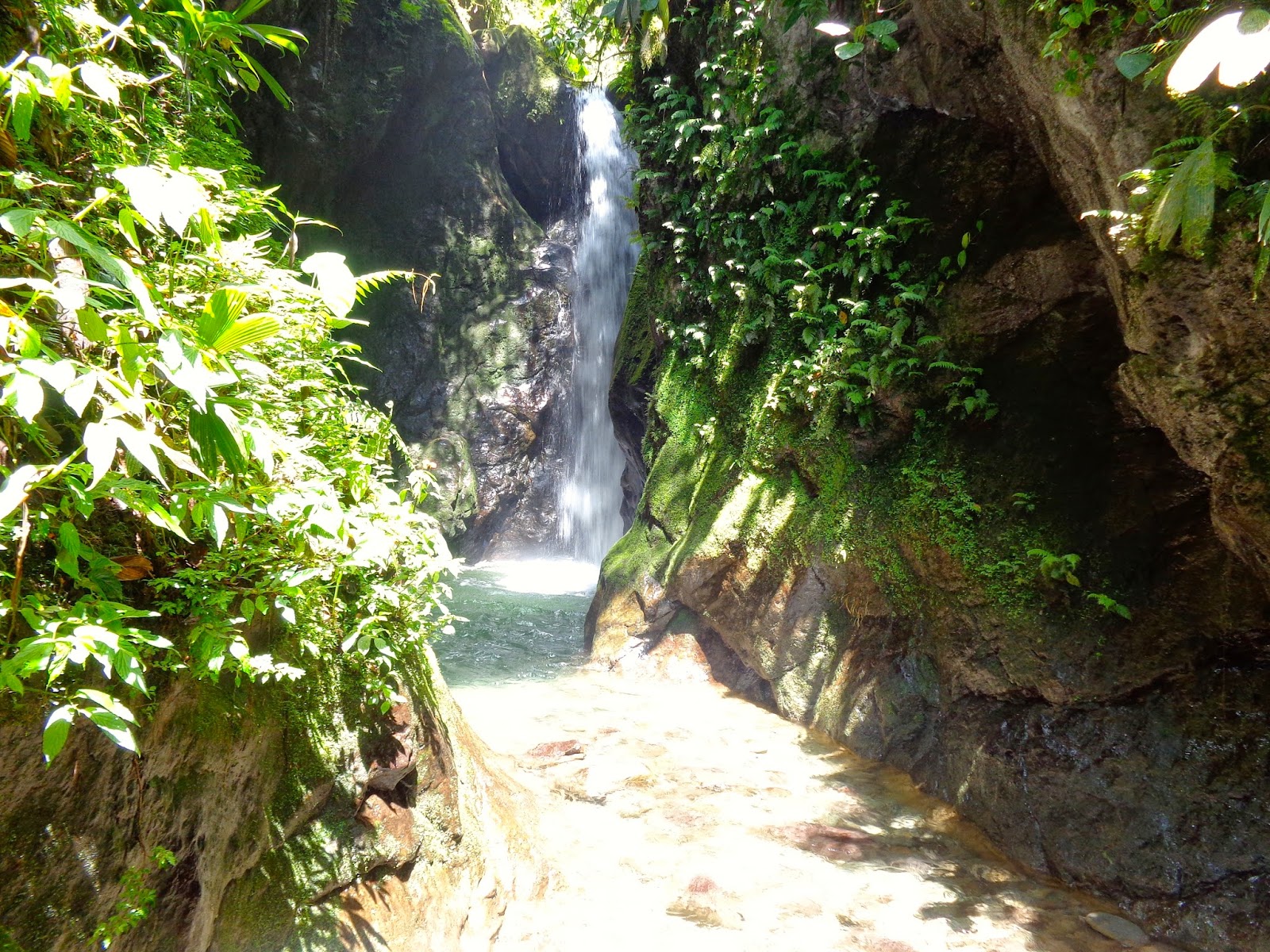 Yay! two cascades down and several more to go. 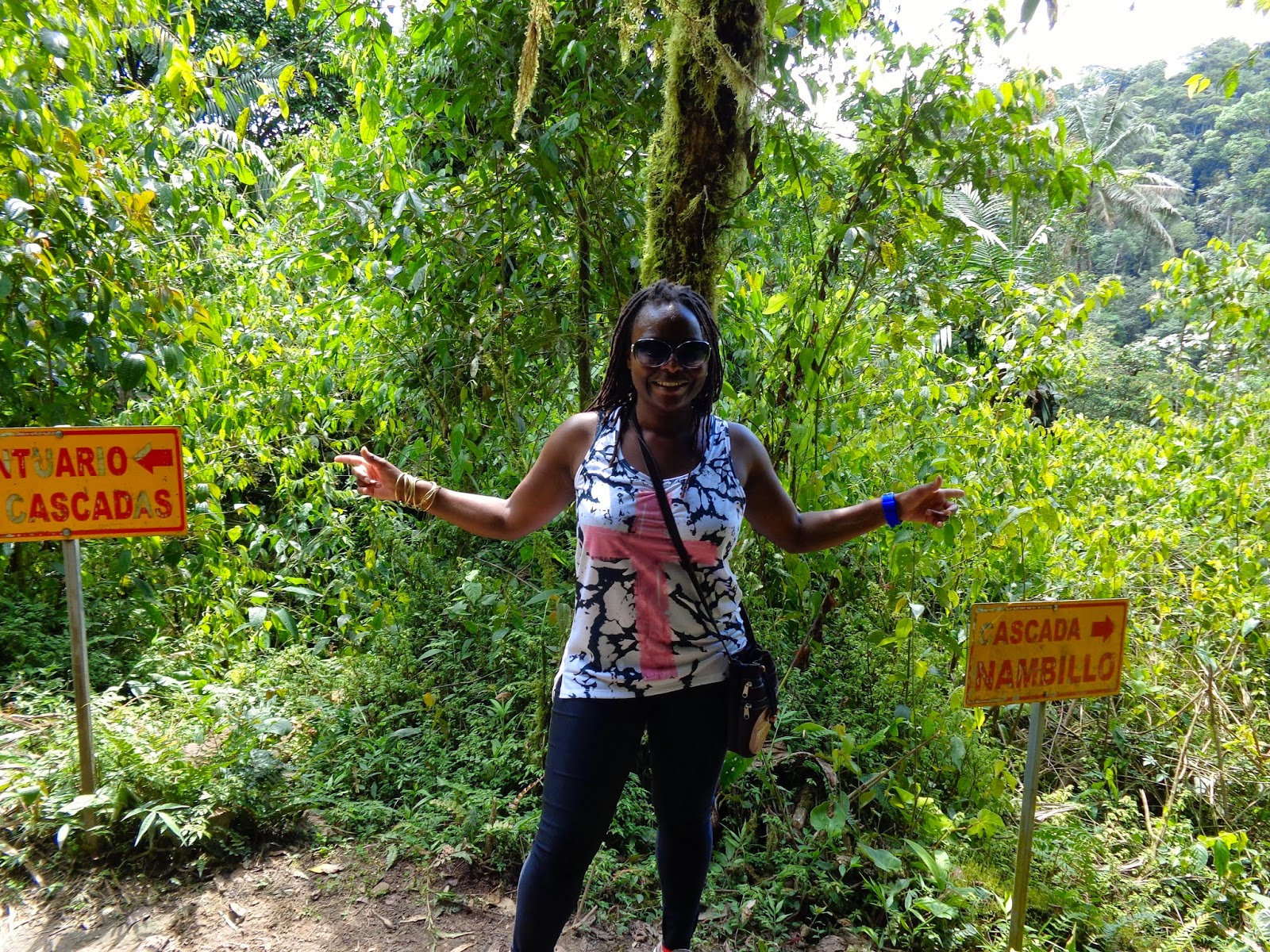 We trekked for about two and a half hours before we decided enough was enough. What made things difficult was going uphill, no stair master would be able to compete with these trails. It was quite a work out and we were all huffing and puffing while sweating buckets because of the hot muggy weather.

After we were done with the cascades we decided to go to the mariposario, a butterfly garden where we would be able to see how butterflies are conceived up to the final stage where they become what they are. The garden closes at 4 pm and we got there at 3 pm, the ladies at the reception told us that the best time to visit is usually in the morning when the butterflies are much more active. We were informed that in the afternoon the butterflies are usually less active so we wouldn't be able to see them fly as much. We had an option of coming back the next morning but I figured since we were already there we might as well check out the gardens regardless. It turned out to be a good decision!

The garden was really pretty and the butterflies appeared active because they were flying around alright! made me wonder how it must look like in the morning when they are supposedly way more active. 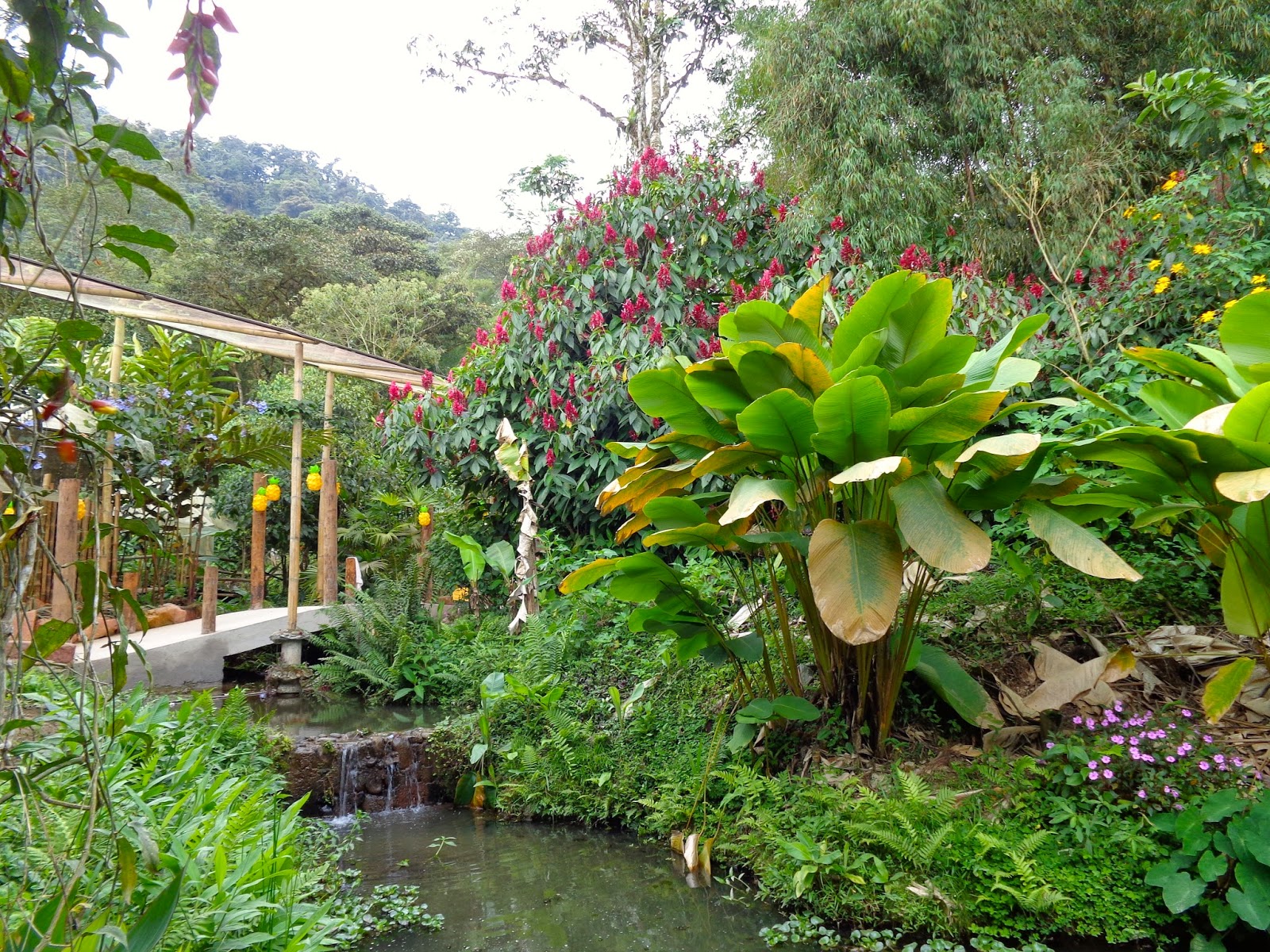 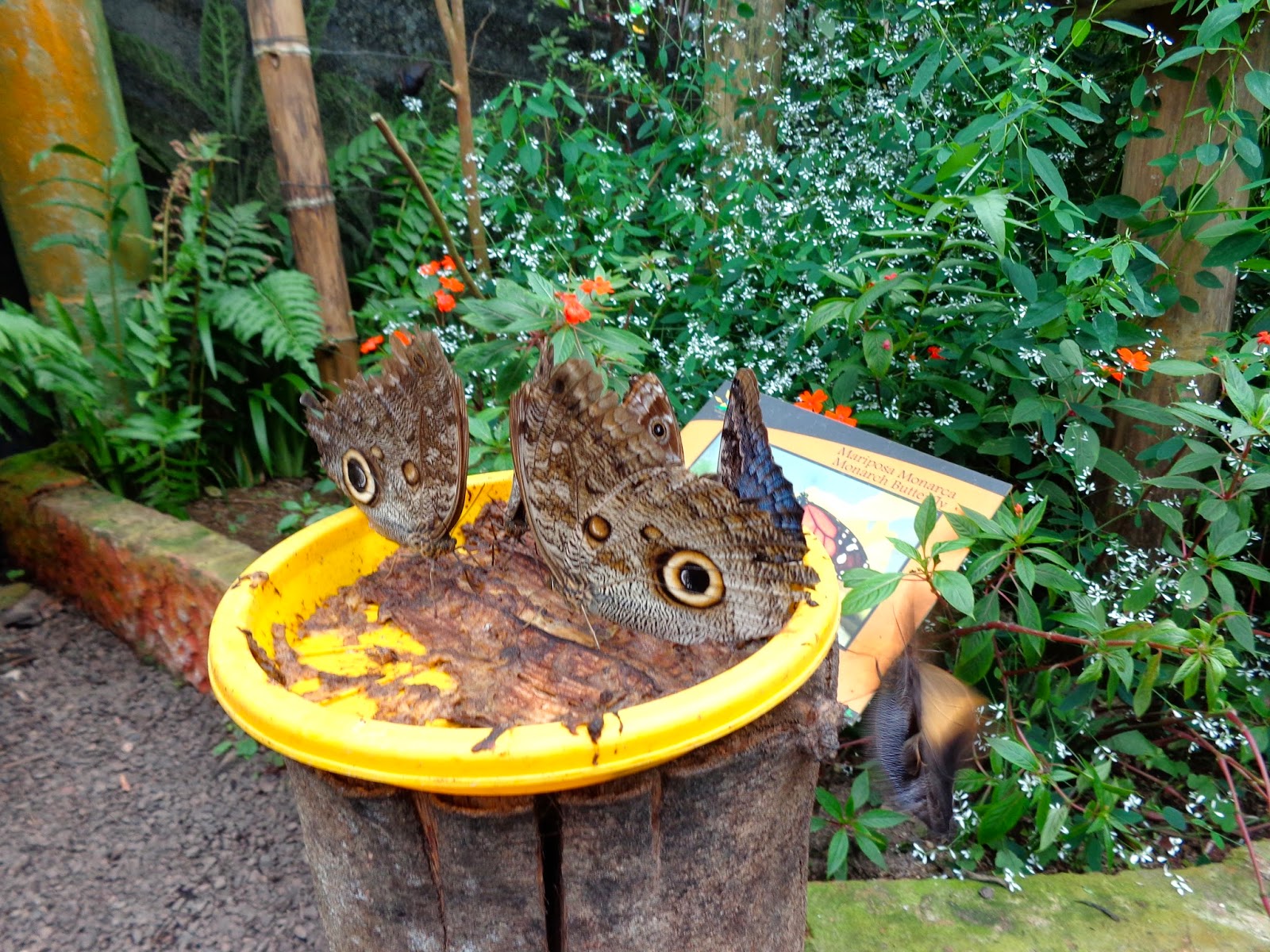 After being shown how to feed them I gave it a try, at first it was a bit weird feeling the butterfly legs on my skin but after getting over the initial weird feeling it wasn't so bad. 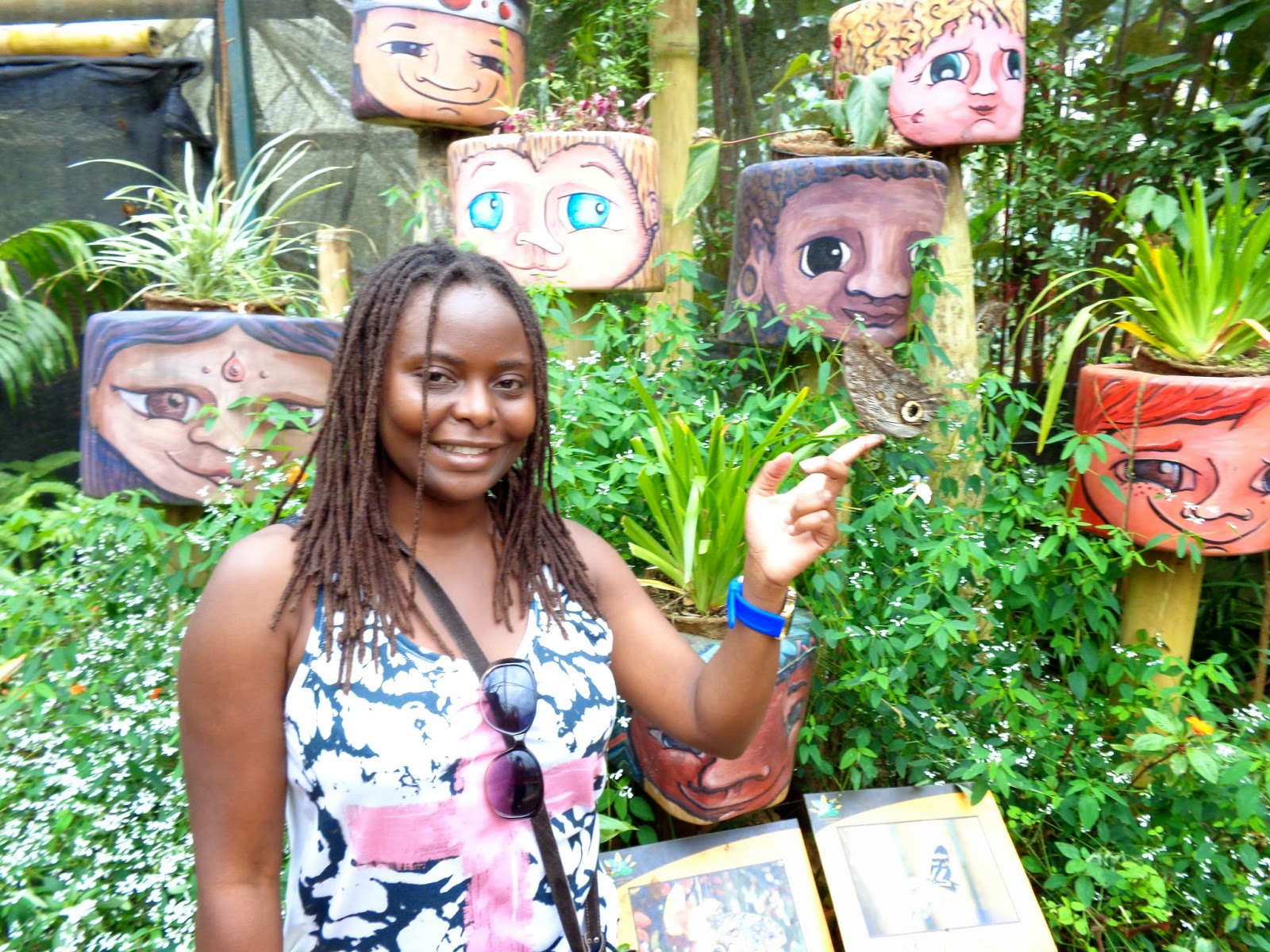 The butterfly below had a taste for the finer things in life, I don't blame it.......hehehehe 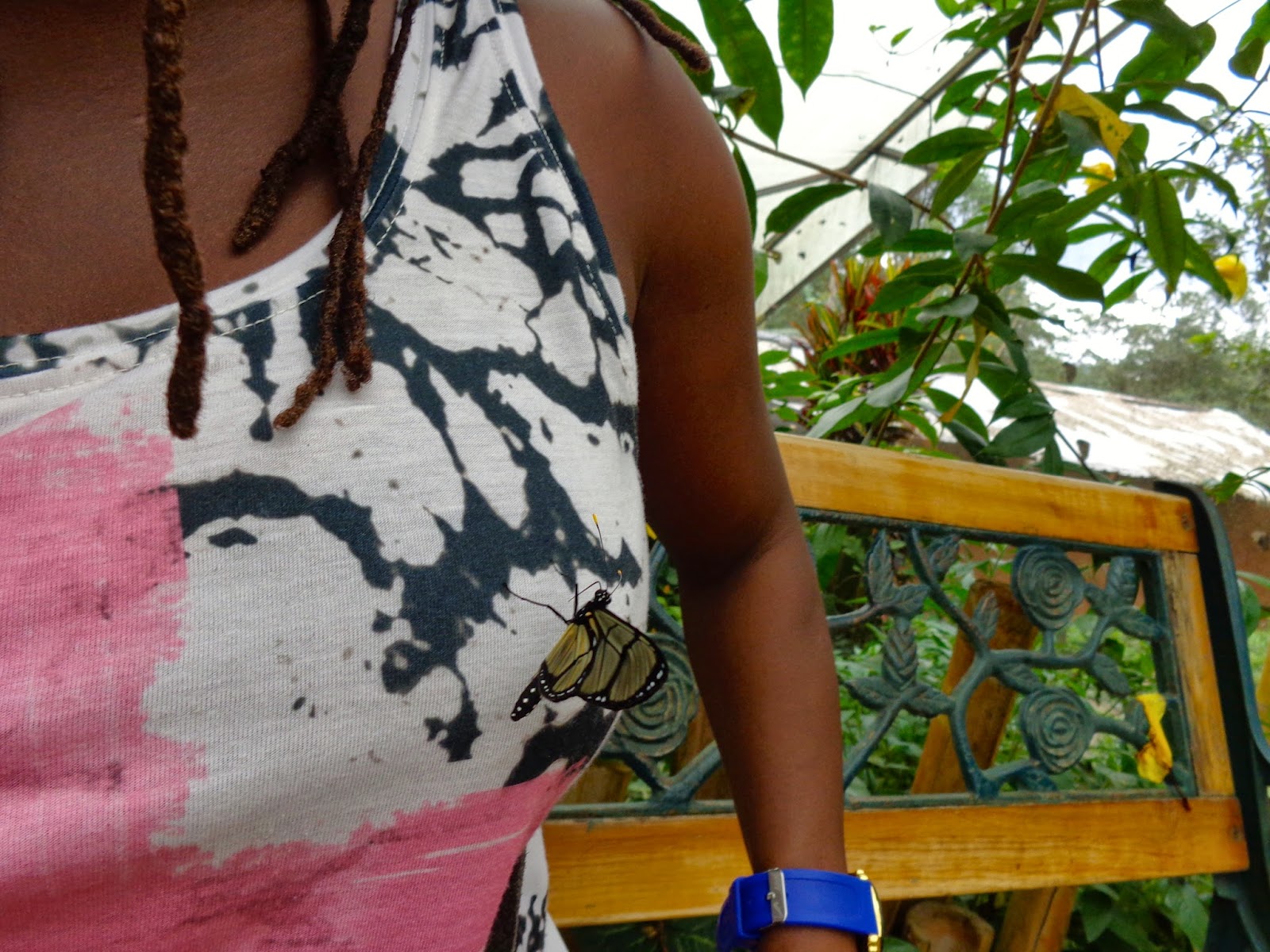 Would you look at the colors on that big fish in the picture below. Very beautiful! 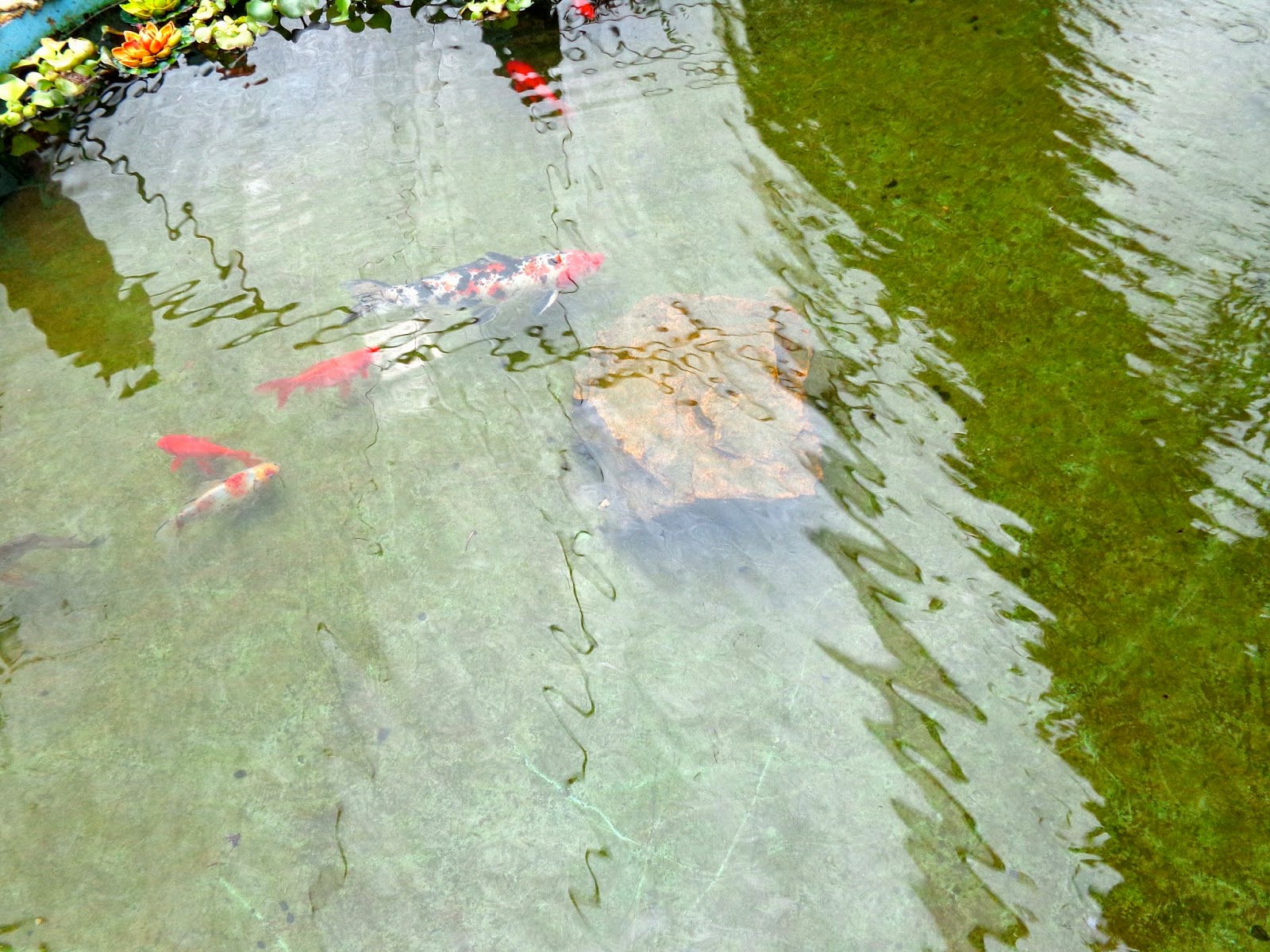 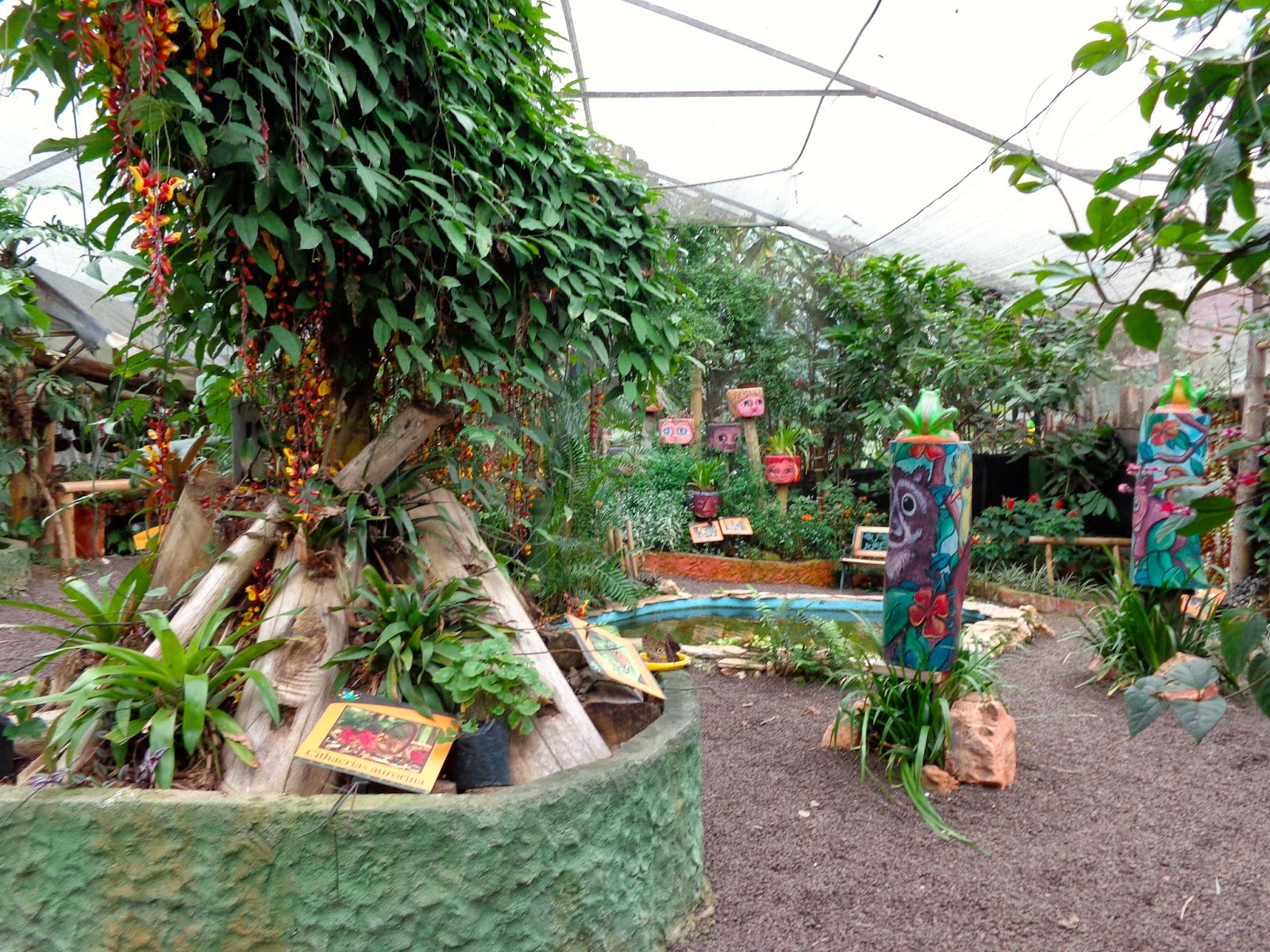 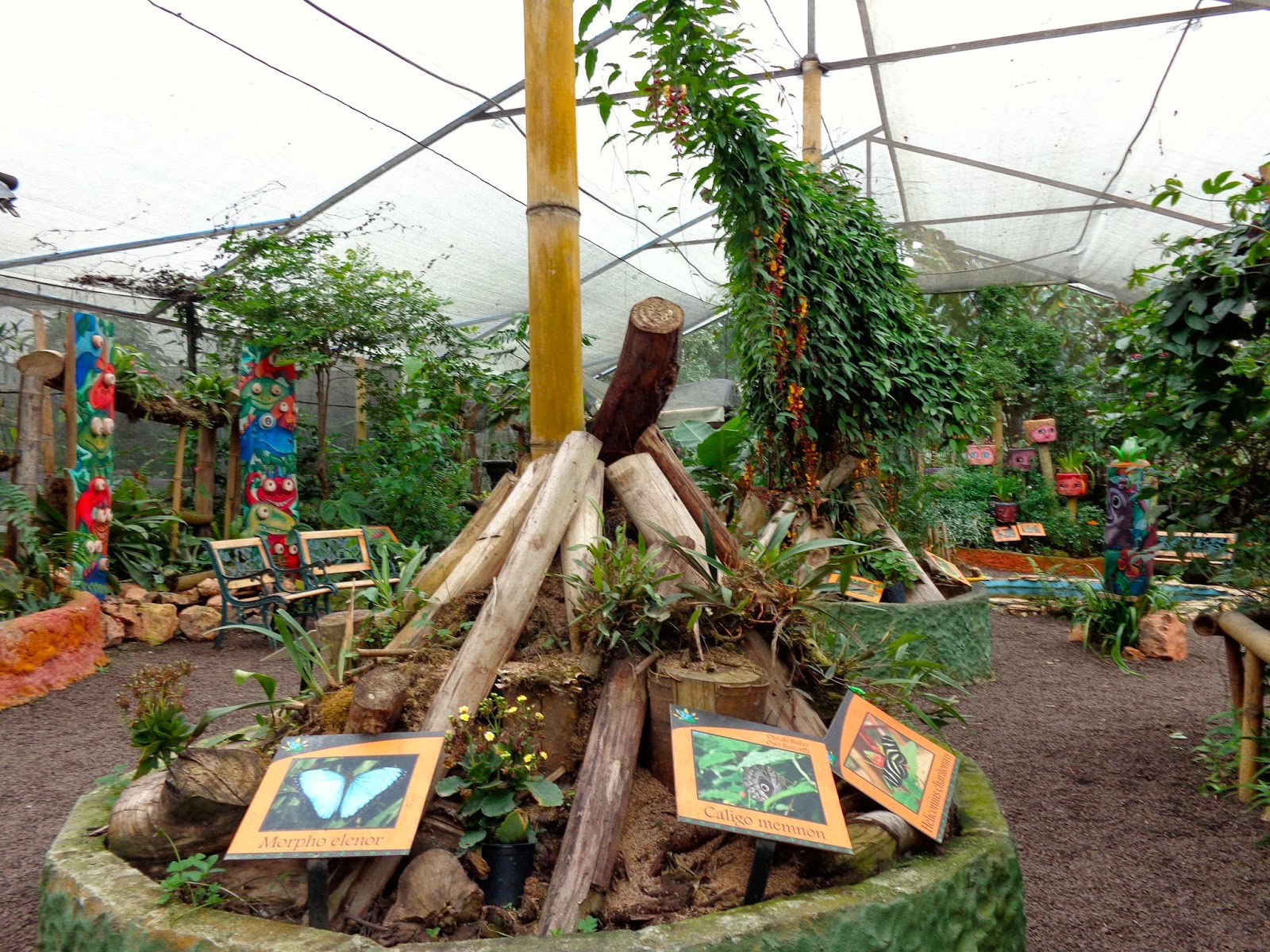 We stayed at the garden until closing time, it was a very chill place but we were informed that in the morning it is usually busy with lot's of people coming to see the butterflies in their very active state. I was glad we were there much later when the place was quiet with not too many people.

That's it folks! after the gardens we went and grabbed lunch, walked around the town and called it a day. A day well spent!

Banños versus Mindo........I prefer the former. Both places are similar in that they have cool nature related stuff to do but Mindo is smaller and the main part of town is rough around the edges. It is surrounded by gorgeous rain forest but the infrastructure isn't really top of the line considering how many tourists visit this place because of what it has to offer in terms of it's natural resources. I just think as one of the many tourist hot spots in Ecuador, they could do better with it's development because it has so much potential. That's just my two cents.

When I was booking my hostel online I found reviews describing it as rustic and charming. Well, the rustic part wasn't an exaggeration!

The hostel is made of wood entirely and you can hear everything that happens in the neighboring rooms! I really hope there will be no rambunctious couple tonight!

My room doesn't have windows and I am in touch with nature alright! I can hear the rain, the river and guess what? I can also be one with the bugs! I got a mosquito net and as I was setting it up I could see all kinds of bugs already attaching themselves on the net. I am scared of going to sleep and waking up only to be faced with some huge strange bug giving me the stink eye.

I have to give this hostel props though, their showers are awesome. The water pressure is great and the shower head is big so it emits water over a big surface area, taking a shower this evening felt like I was in a waterfall and I did not feel like leaving.

The Wi-Fi here is really fast but it also depends on which room you are in. I am glad I am not having any connection issues.

I have to say Ecuador has been really good for me. I have lost weight because of the healthy lifestyle, I feel happy here and my skin is close to regaining it's previous glory since the weather isn't as hot in Quito so I am not breaking out. Heat + Constant Sweating = Disaster for my skin

Did you know butterflies only live for a month? considering the long process they have to undergo to become butterflies I just think they have been robbed by nature. When they are at their most beautiful is when they die so soon.

I have tucked my mosquito net so tightly between the mattress and the bed but guess what? now I have to go pee and I am sure as soon as I untuck the edges some bugs might just sneak it. I knew I shouldn't have drank so much water before bed!!! and on that note, good night/morning/evening depending on where you are. I have to go to the bathroom.