Le Sigh! all good things must come to an end unfortunately so my time in this beautiful city ran out and I had to leave to go back to Quito. On my last day I wanted to walk around the city centre and take my time exploring the streets and shops since I had been busy with other activities and never really got to check out the main town and it's surroundings.

As luck would have it, my last day here happened to fall on market day so I was able to check that out. What was on sale was mostly fruits, meat, grains and vegetables. I wanted to buy some fruits but I changed my mind since I didn't want to be carrying around fruits on my way back to Quito plus fruits here are plentiful and cheap so it's not like I couldn't get them in Quito. I spotted a few food stalls and went to inquire about breakfast but all of them were offering what appeared to be lunch menu. I don't know about you but soup, rice, vegetables and chicken is a bit much for breakfast if you ask me, I wasn't about to shock my system with such heavy food early in the morning so I opted for bread and hot chocolate. My food looked so plain compared to those around me. 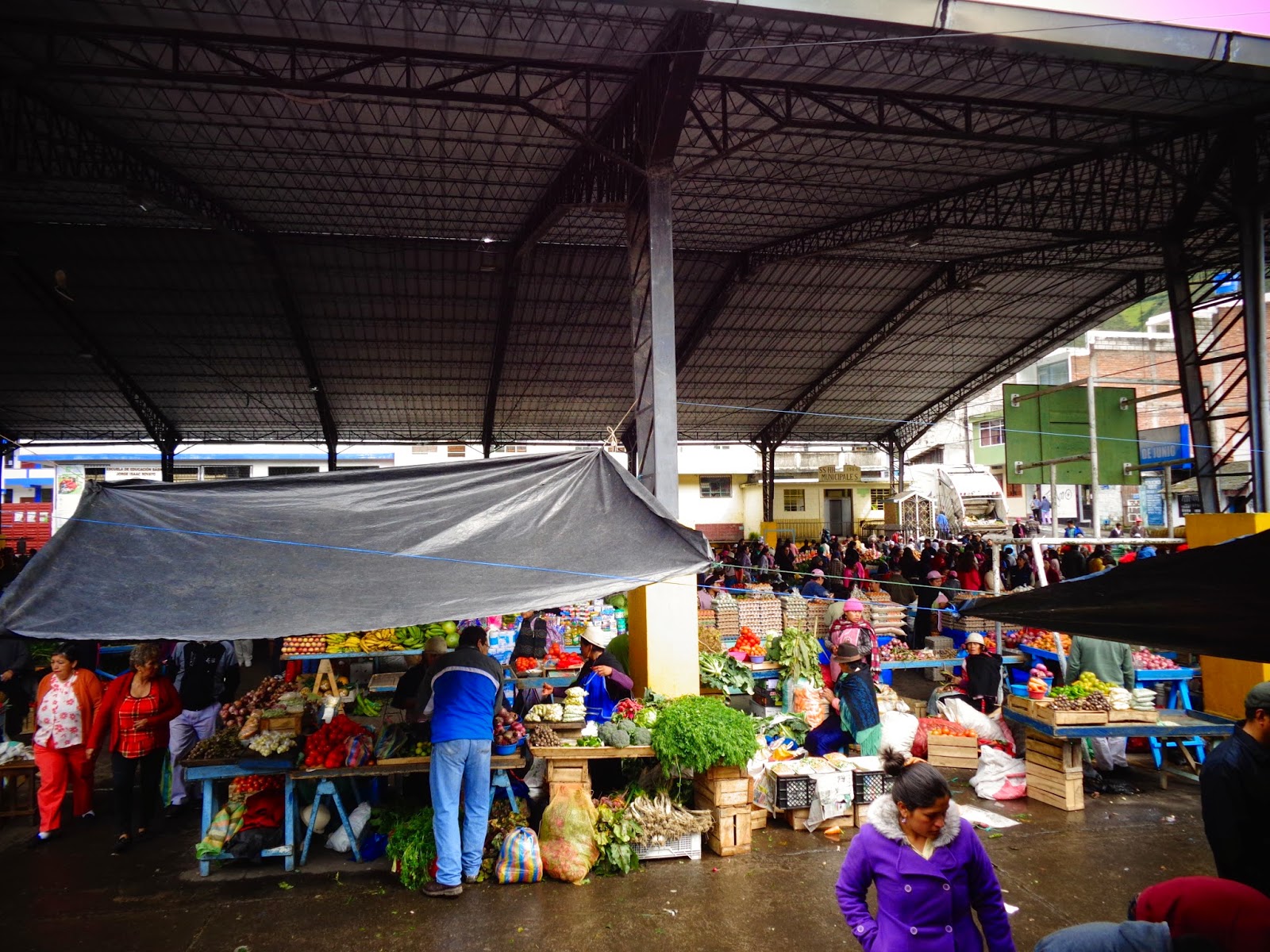 After breakfast I walked to the two parks within the city centre and lingered for a while enjoying the peaceful atmosphere and taking in the beauty of my surroundings, check out how green and pretty everything is........ 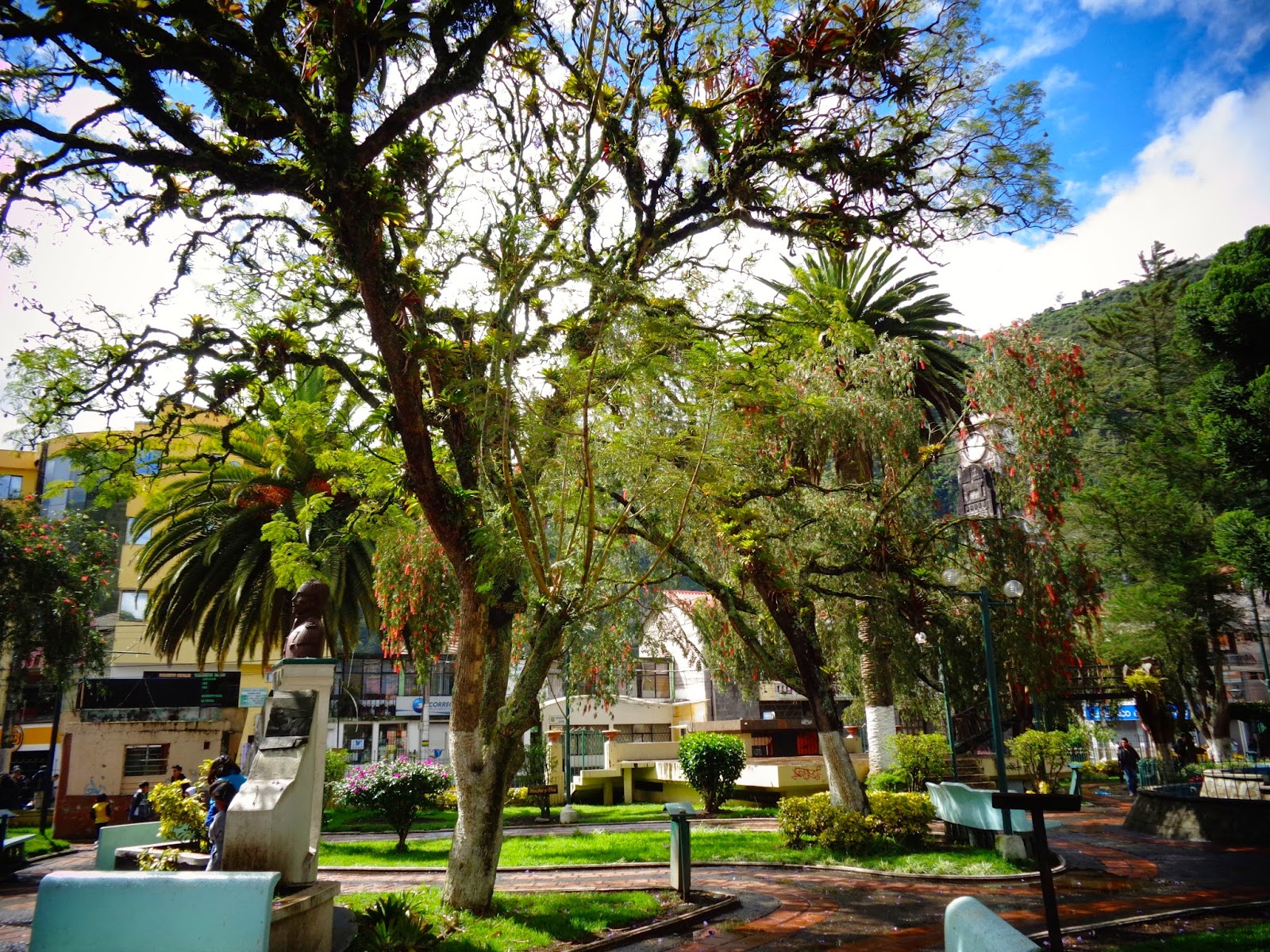 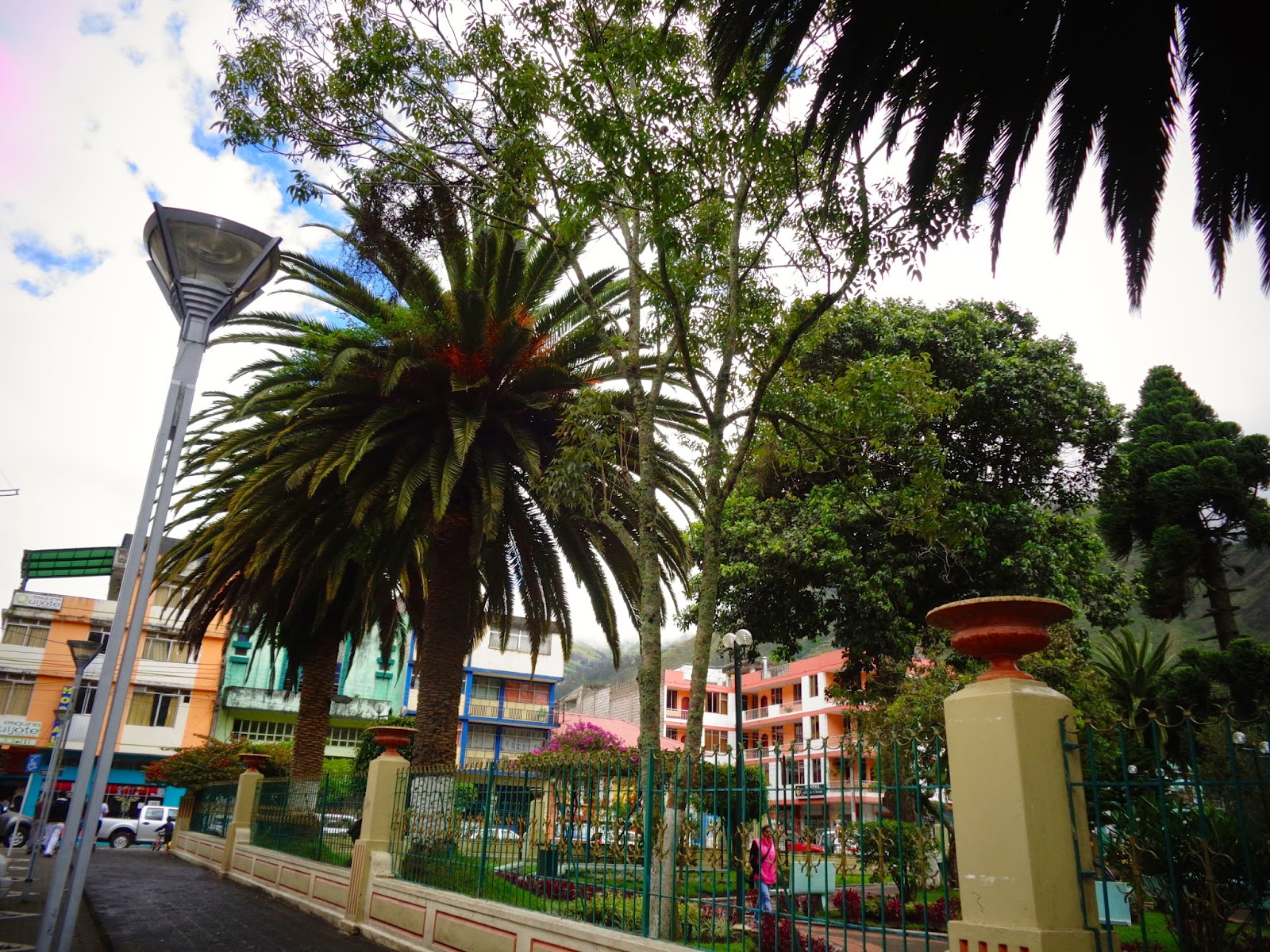 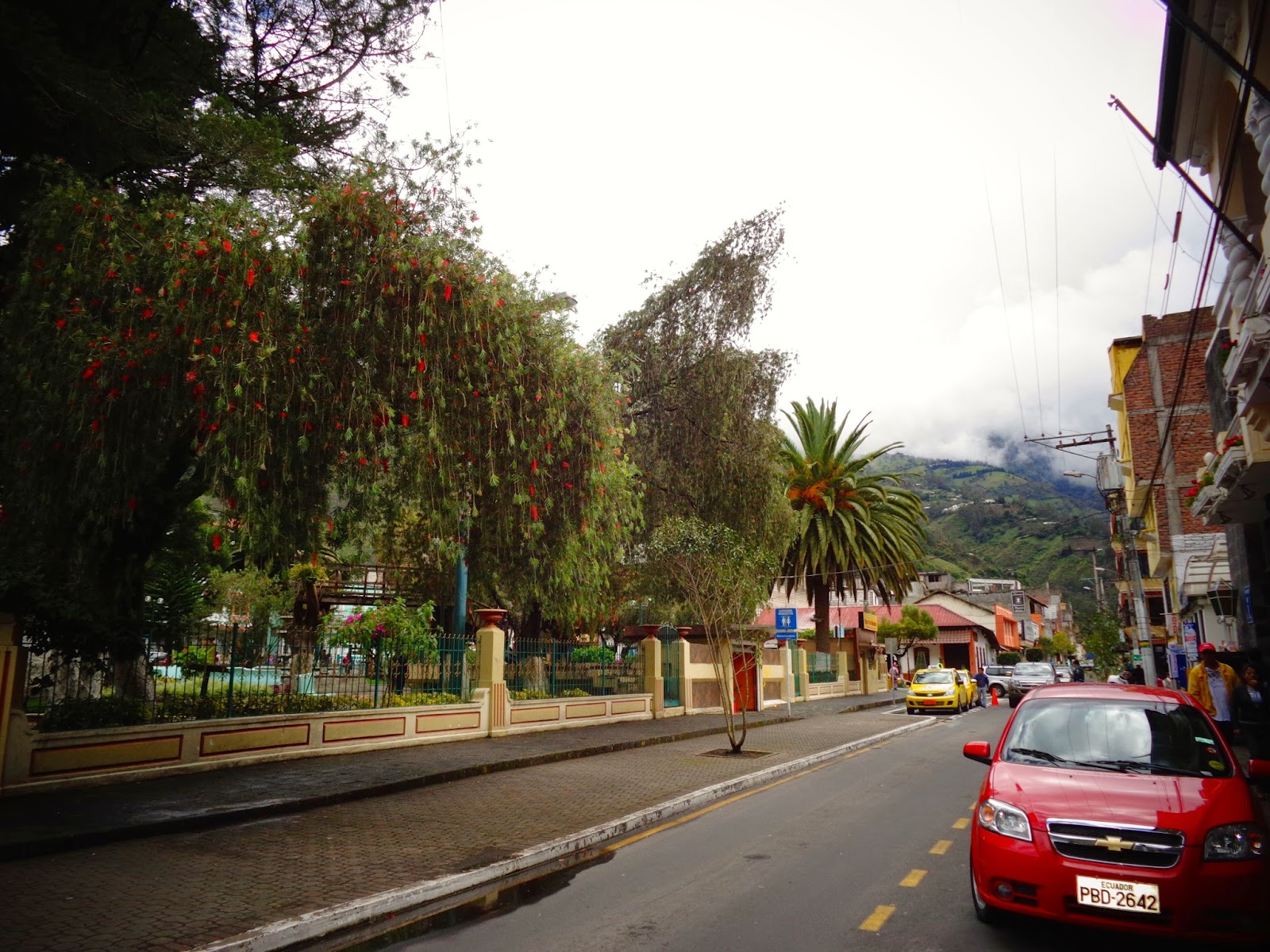 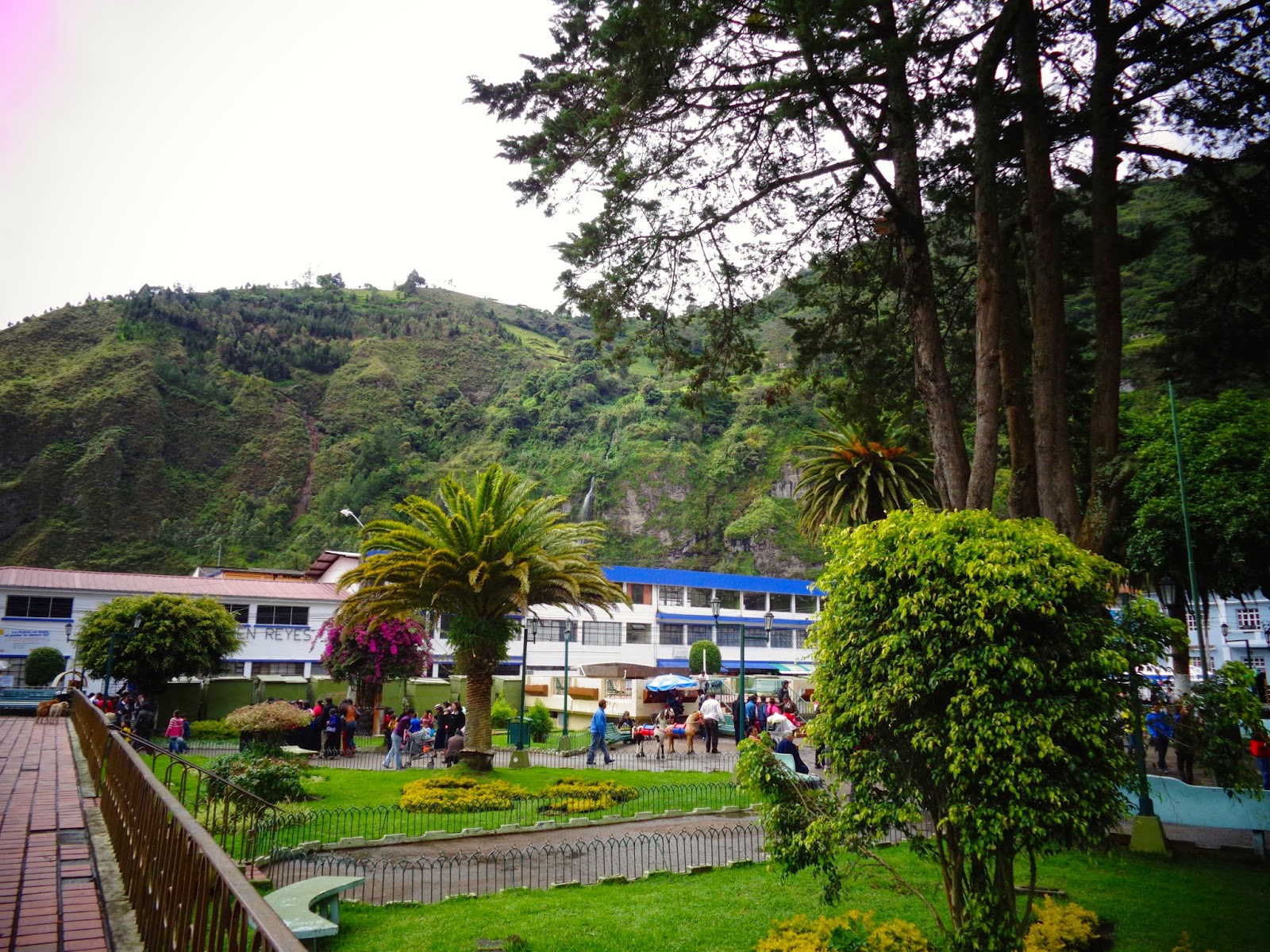 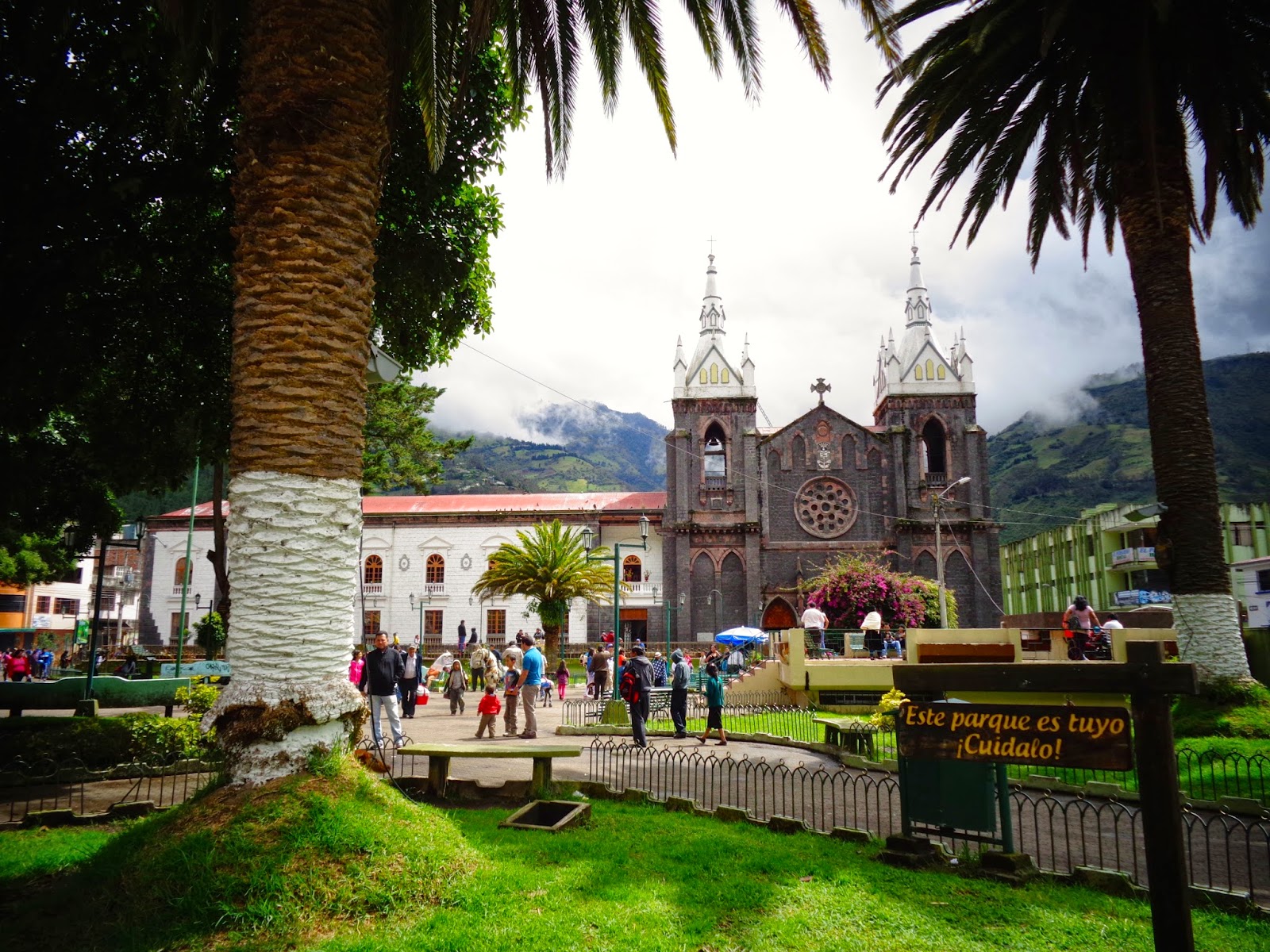 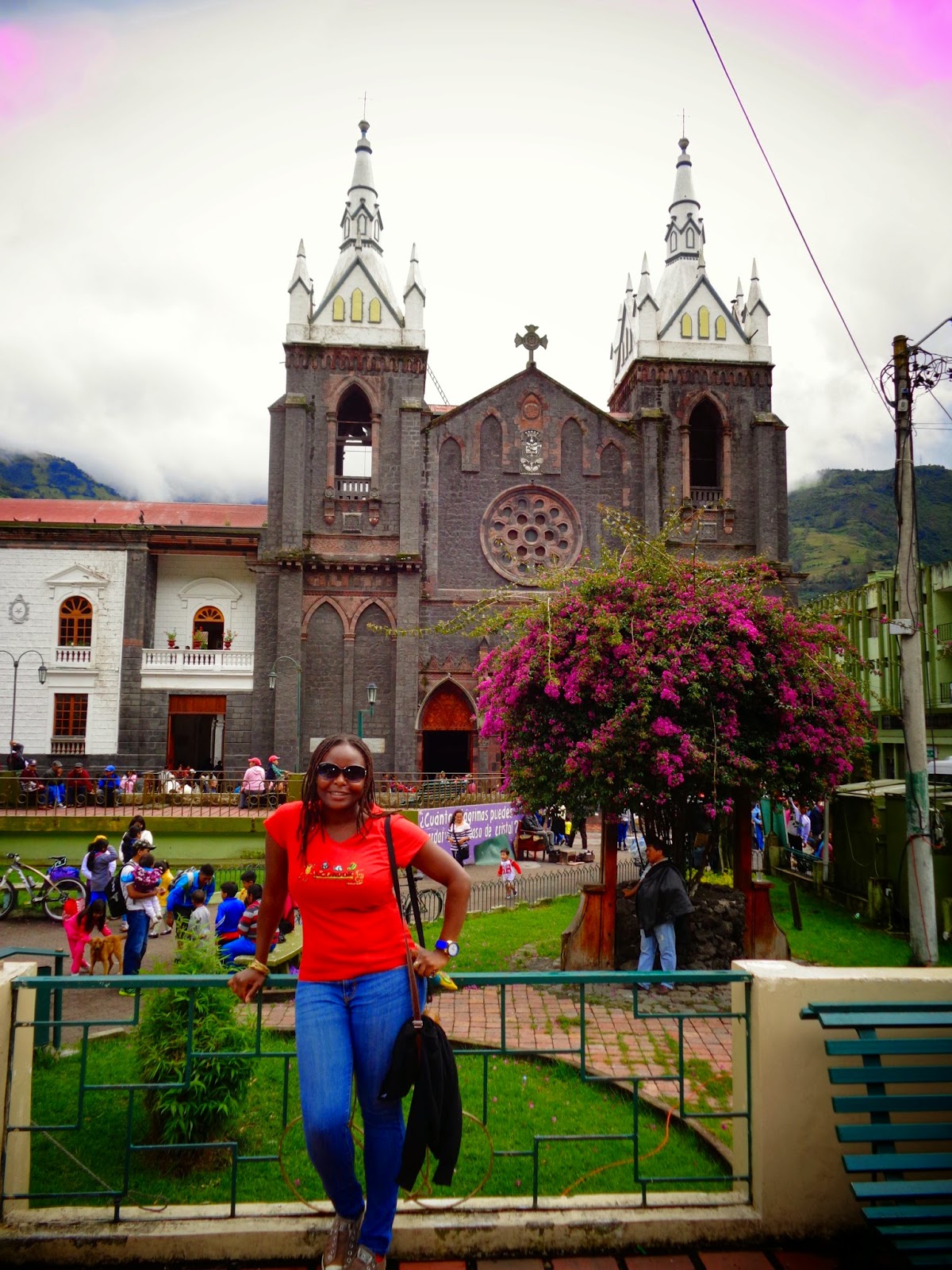 I was surprised by how busy the city got being that it was on a Sunday, I was expecting everything to be closed and the streets to be deserted but I was pleasantly surprised because everything was so lively and there were quite a number of people walking along the streets, mostly families. 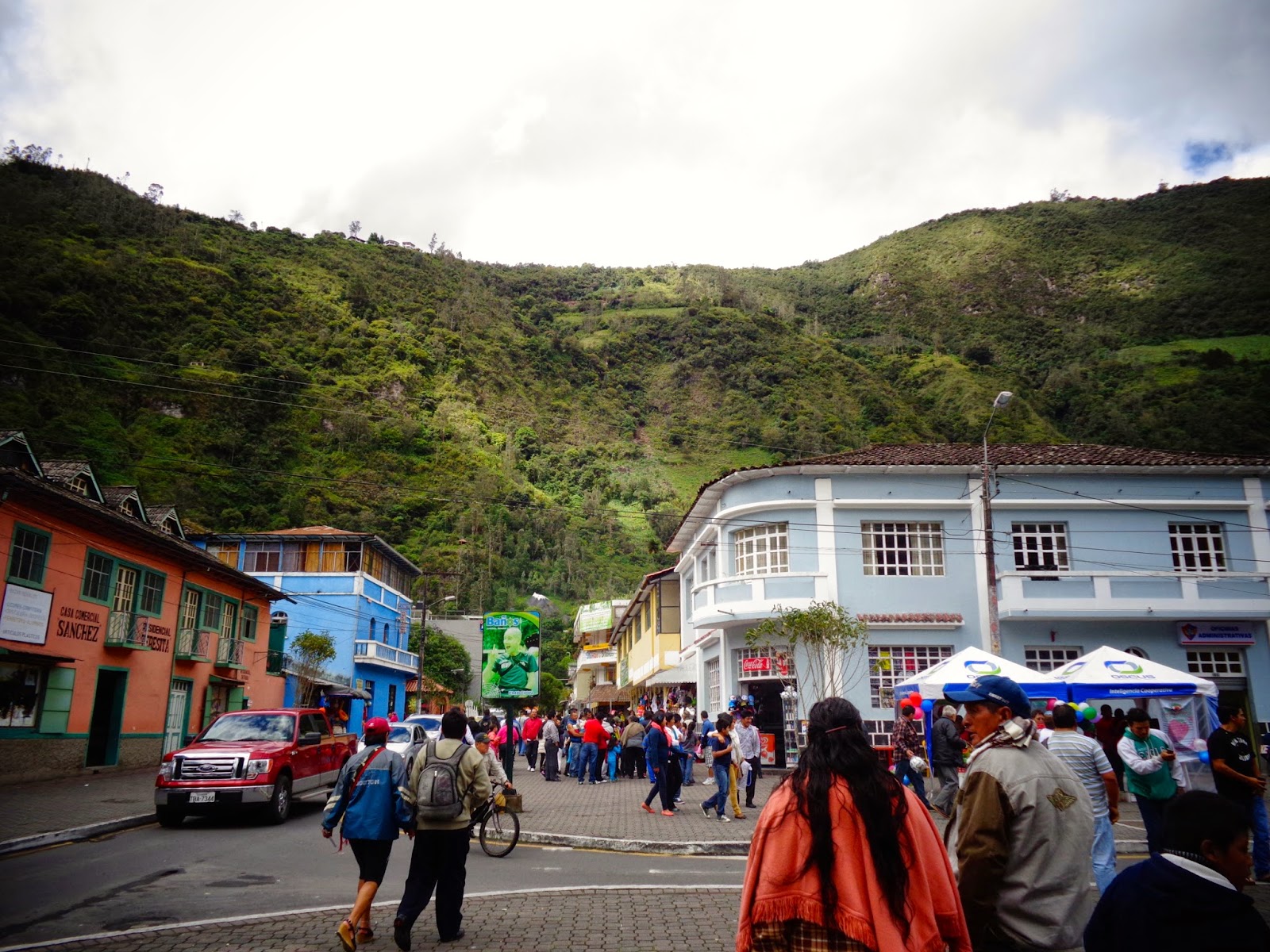 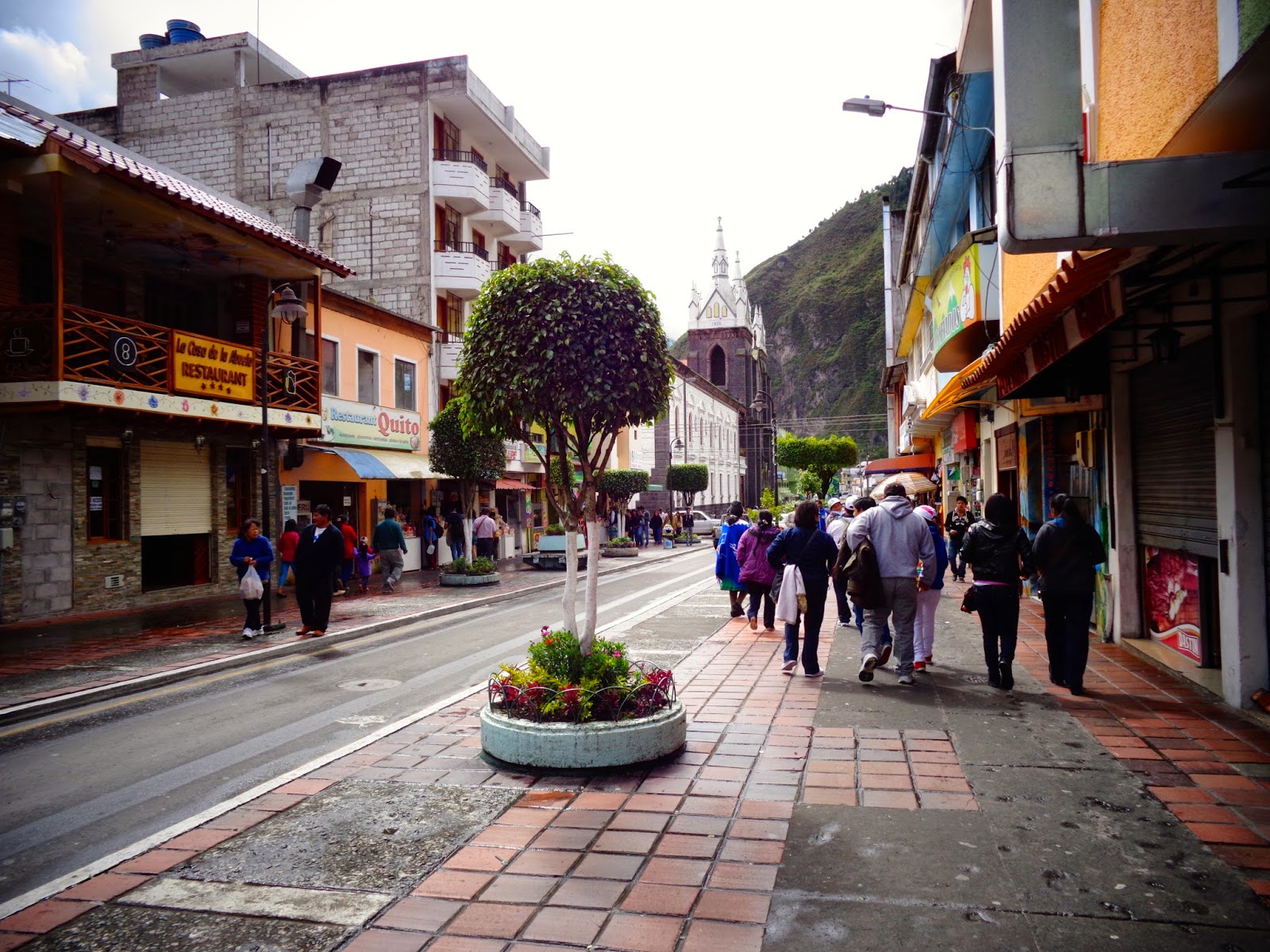 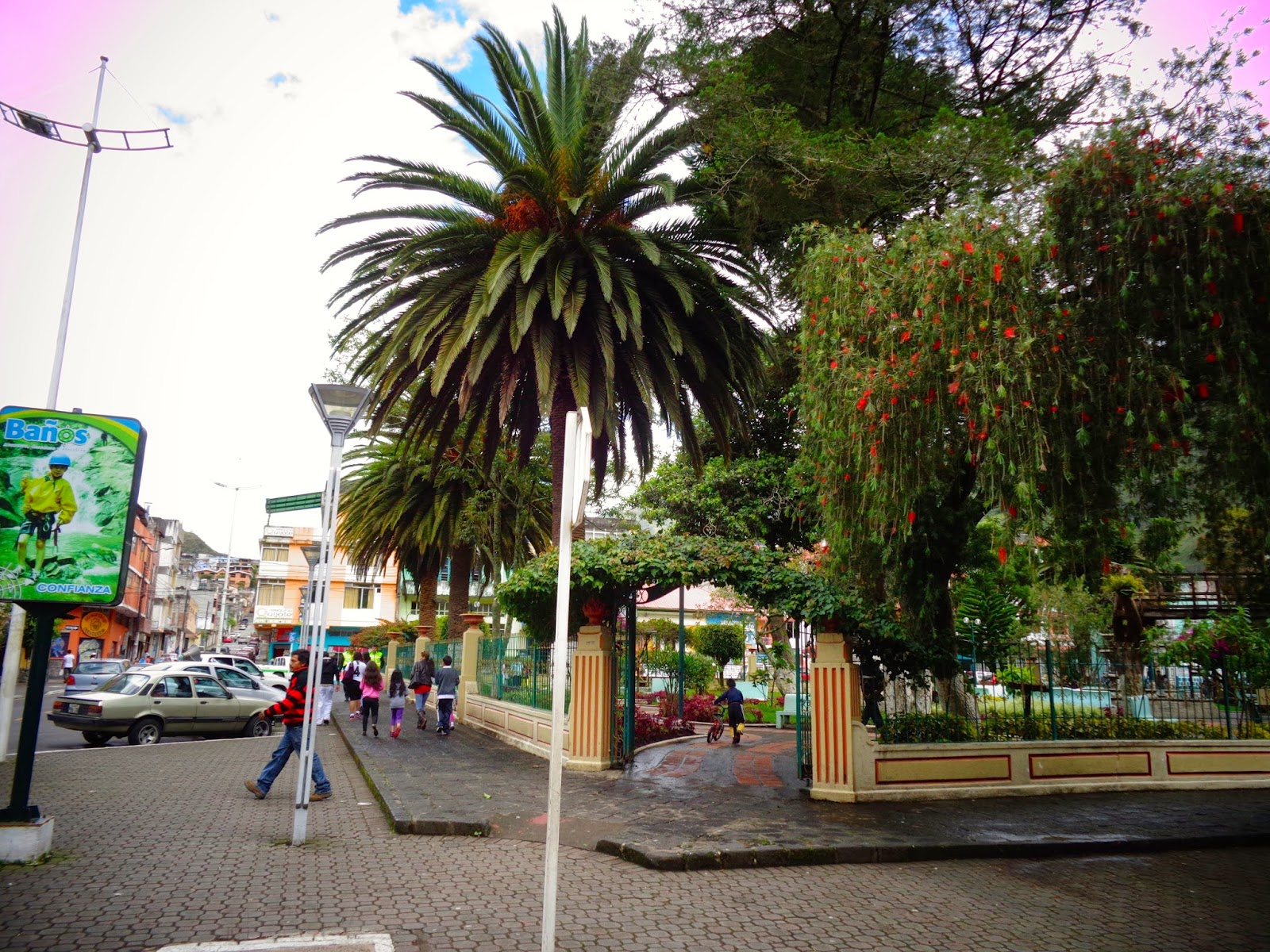 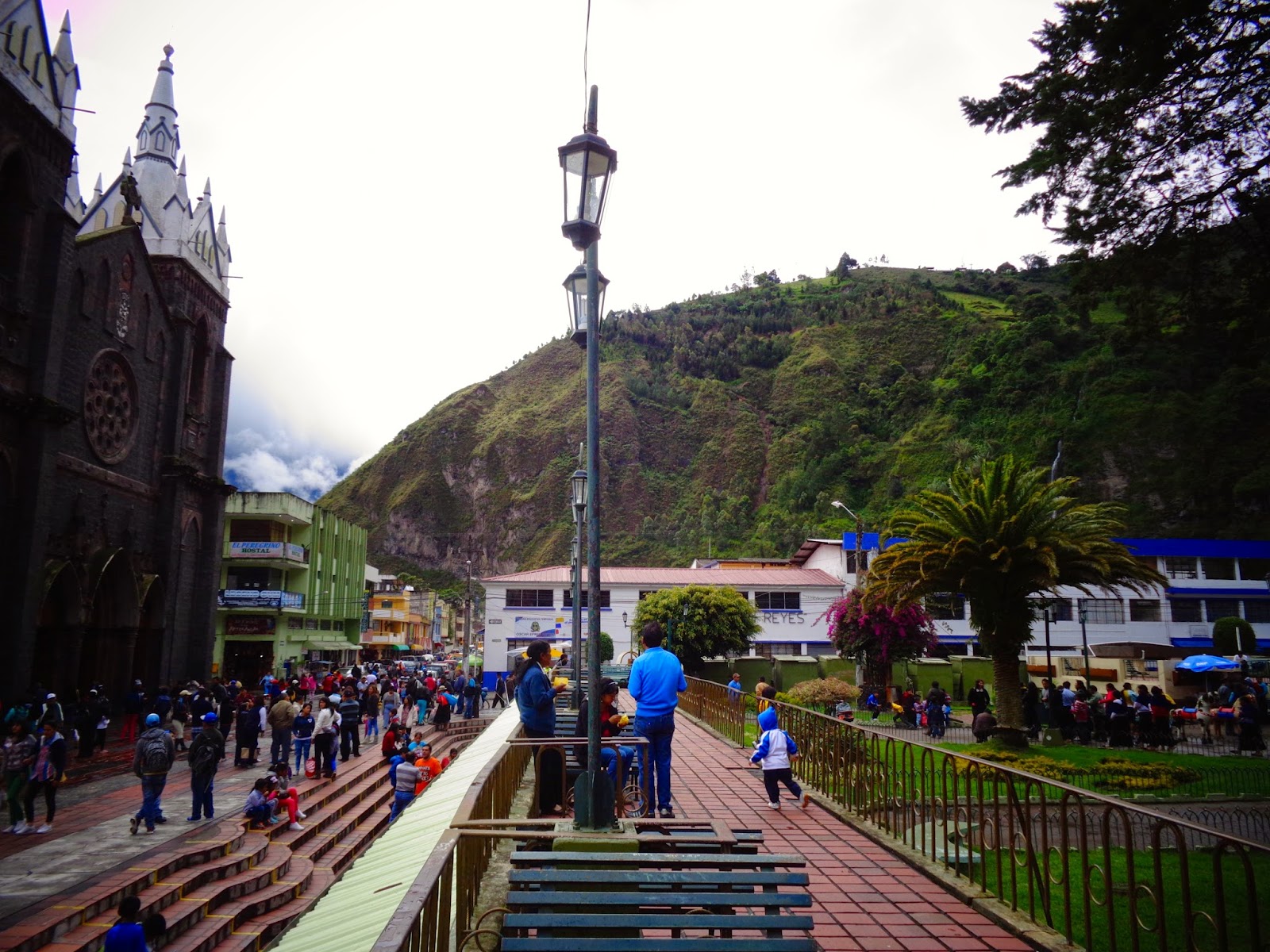 Don't get me started on shopping in Ecuador. I have seen so many colorful and beautiful hand made stuff that it's a miracle I have managed to restrain myself considering how reasonable the prices are. 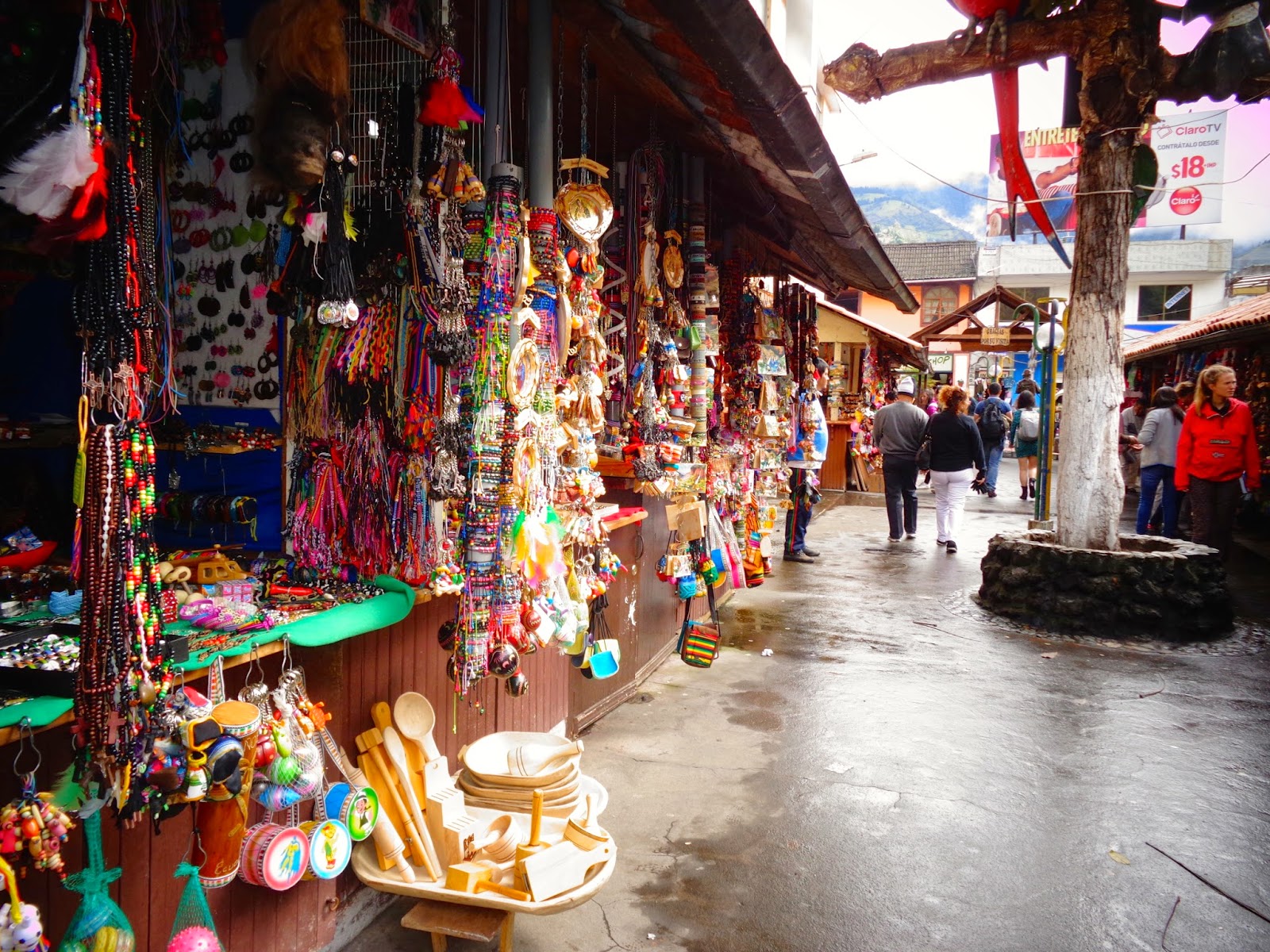 Prior to visiting Baños I had been told about the local candy, melcocha which is made from sugarcane. In the pictures below you can see part of the process of making this candy, I tried some and I think I instantly got a cavity. It was too sweet for me and this is coming from someone who has a major sweet tooth so you can imagine how sweet it was. 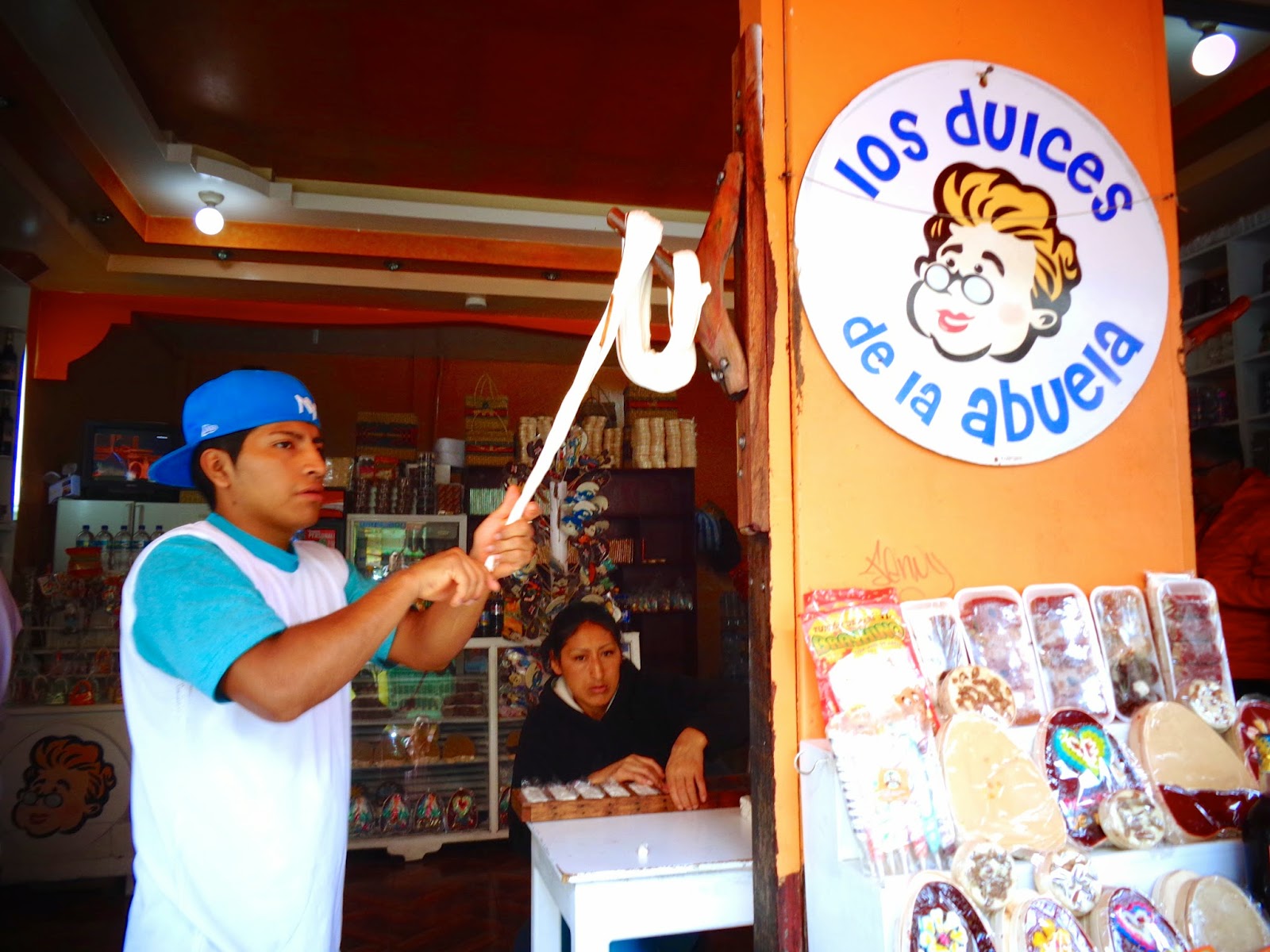 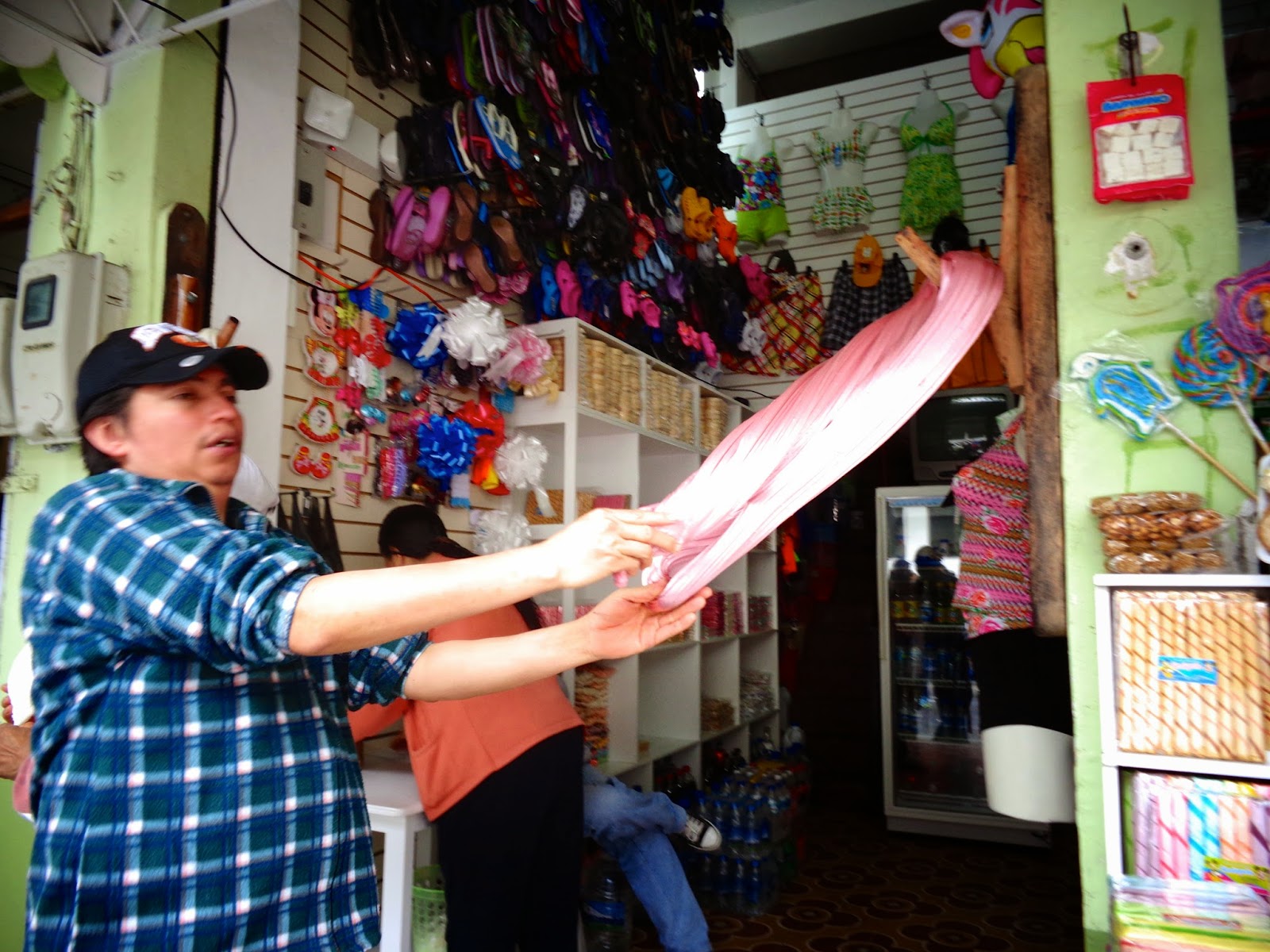 After my walk around town I headed back to my hostel to get my bag and take the last picture with the very sweet owner of the hostel but alas! he had gone home and his daughter was at the front desk instead. I felt really sad because I wanted to personally say goodbye to him since he was very kind toward me. I told the daughter to pass my regards and she promised to do so. I hope she did.

That's it folks, I headed to the bus station and half an hour later I was on my way to Quito.

Did you know the famous Panama hats are actually made in Ecuador and not Panama? the quality varies greatly and of course that determines the price as well. I love those hats!

I knew I shouldn't have drank too much water prior to my bus ride from Baños to Quito. Try imagining holding your pee for three hours! yeah, not fun at all. When it get's to a point where you start fantasizing about toilets then you know things are bad!

As if my bus ride was not uncomfortable enough, there was a young couple behind me who were super annoying! they kept giggling loudly over silly things and would make this sucking noises and all I could think of was, "please let them be sucking on candy." Unfortunately I don't think they were sucking on candy because the noises continued all the way until Quito. Aaah! to be young and in love, so beautiful for those involved yet so annoying for those around.

I can't begin to count the number of inappropriate conversations I have had to put up with around here. I find it so inappropriate when a married man starts grilling me about my love life and urging me to tell him if I like Latin men or if I find them attractive or if I am looking for a boyfriend. Really? and what do you intend to do with that information anyway? and this goes for any man not just married men. I took a taxi today and the driver who by the way has a daughter old enough to be my friend just kept grilling me about my love life to the point where it was actually creepy! no matter what tactic I used he wouldn't stop. That was the longest ride ever!

When I arrived in Quito I was really hungry so I went out to eat with my roommate, it was late in the evening and I appreciated his company because I felt safer walking with him in the dark. We passed this one lady who approached us trying to sell bracelets. I swear my heart did double flips as I panicked thinking she was going to try robbing us. I literally froze and started shaking. Believe it or not I am now more scared of women on the streets than men because it's the women who got physical and aggressive with me when I was getting mugged. The people you suspect the least are the ones that shock you.

Speaking of being scared of women on the streets, so today while I was walking around Baños I saw these four girls seated at the park and they started looking at me one of them had this glazed look like she was high or something, have you seen a girl do a 360 degree turn within a second? I was out of there ASAP! actually when I think of it I just laugh at how dramatic I bolted but for real, I don't know how to fight so I was imagining if they jumped me I would be done for. I really hate being this paranoid.