A few days ago I had mentioned how long it had been since I last went out dancing salsa and that I had lost the enthusiasm for going out. Well, I am glad to say that the enthusiasm did come back with a bang! as soon as I listened to some of my favorite songs on youtube I started itching to go out and check out some salsatecas.

This one club named Lavoe had been recommend to me by several people and I finally decided to check it out. On their website they had descriptions of what kind of music to expect on each salsa night and since I ended up going on Wednesday, the theme of the night was Salsa Brava (loosely translates to hardcore salsa). It seemed interesting and I was really looking forward to checking it out so I called one of my Dominican friends and off we went.

The sign at the entrance is a bit small and if you are not too familiar with the location you can easily miss it especially if you arrive too early and there isn't much traffic. It took our taxi driver a few minutes to find it, turns out we had just driven past it without realizing it. 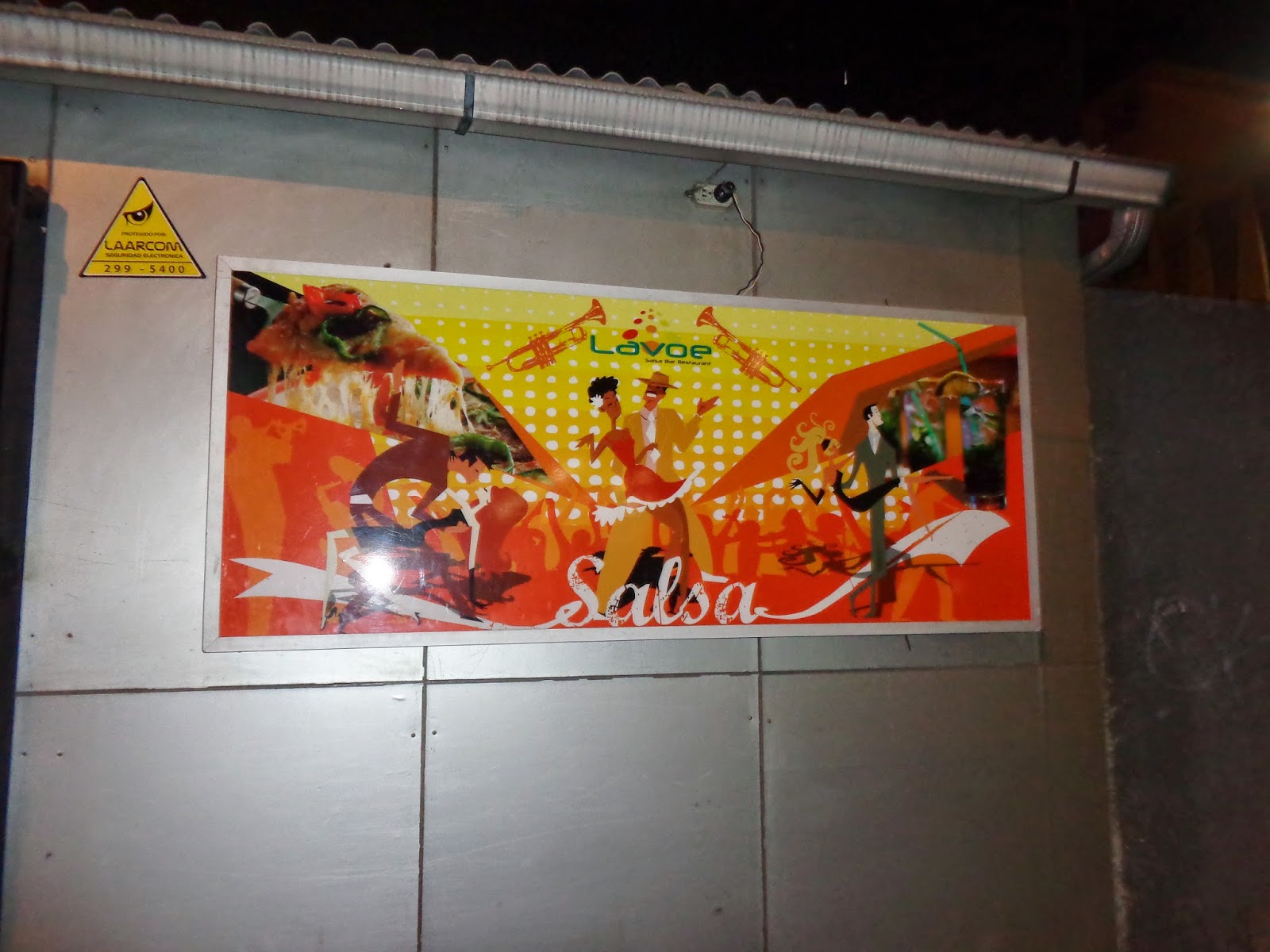 To get in we didn't need to show our ID like in other clubs I have visited in the city. We were given a card and instructed on how to use it if we wanted to order anything from the bar. The bartender would scan the card with any order we made and at the end of the night we would need to present the card at the entrance so it would be scanned once again to determine the total bill which would have to be paid before leaving the club, the bouncer at the door would need to see a receipt before letting you out.

This was at the entrance, there were numerous pictures of the clientele and various bands that have performed at the club. 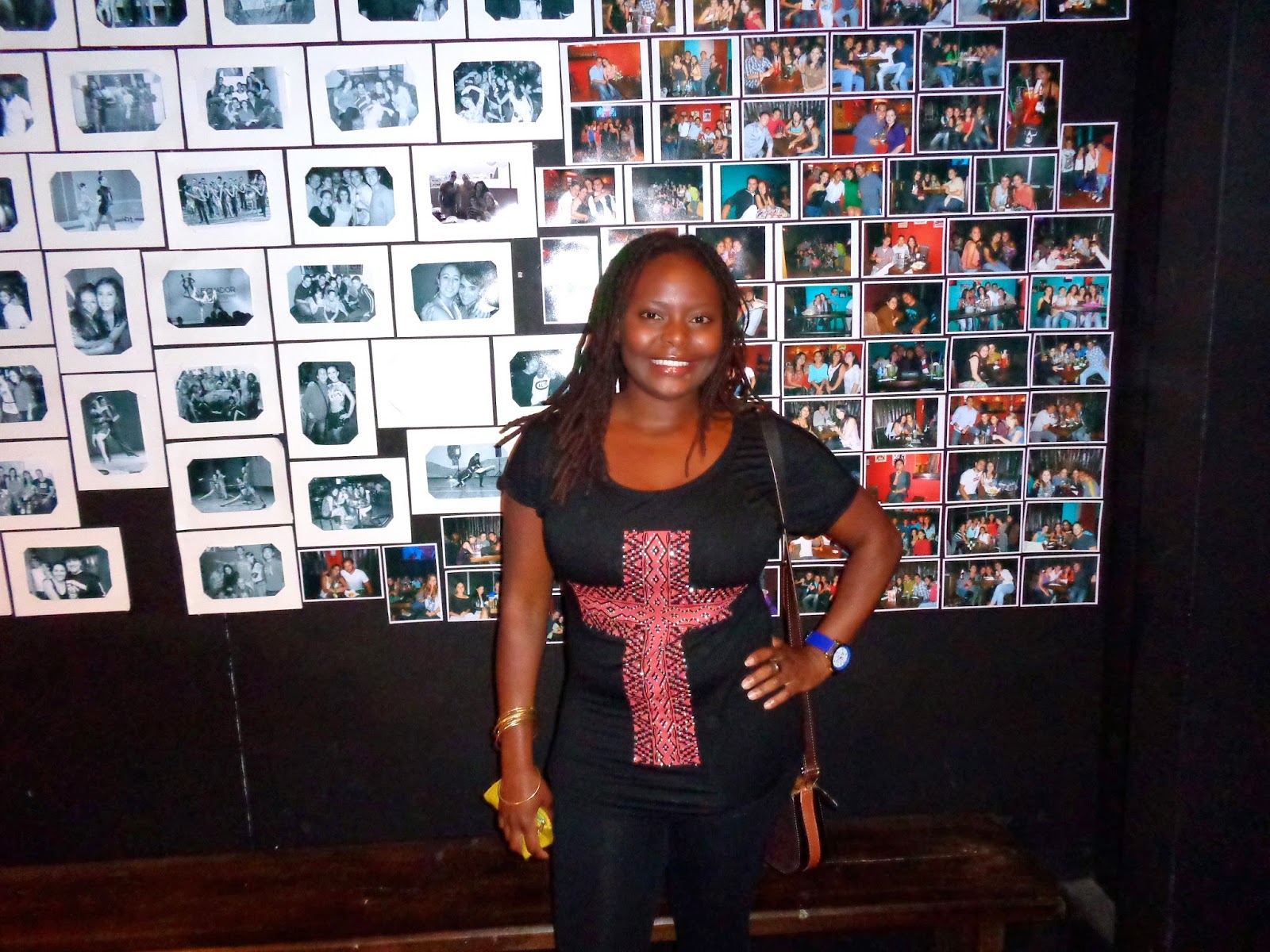 When I entered the club I realized what had inspired it's name. There were posters of Hector Lavoe all over the place and the first thing you noticed as soon as you entered the club was the big sign with bright lights, of Lavoe's image right upfront. Hector Lavoe was a legendary Puerto Rican salsa musician who is now deceased. I am sure if any of you is into salsa you have probably heard some of his songs. Mark Anthony and Jennifer Lopez actually produced a movie based on his life, the movie was titled El Cantante. 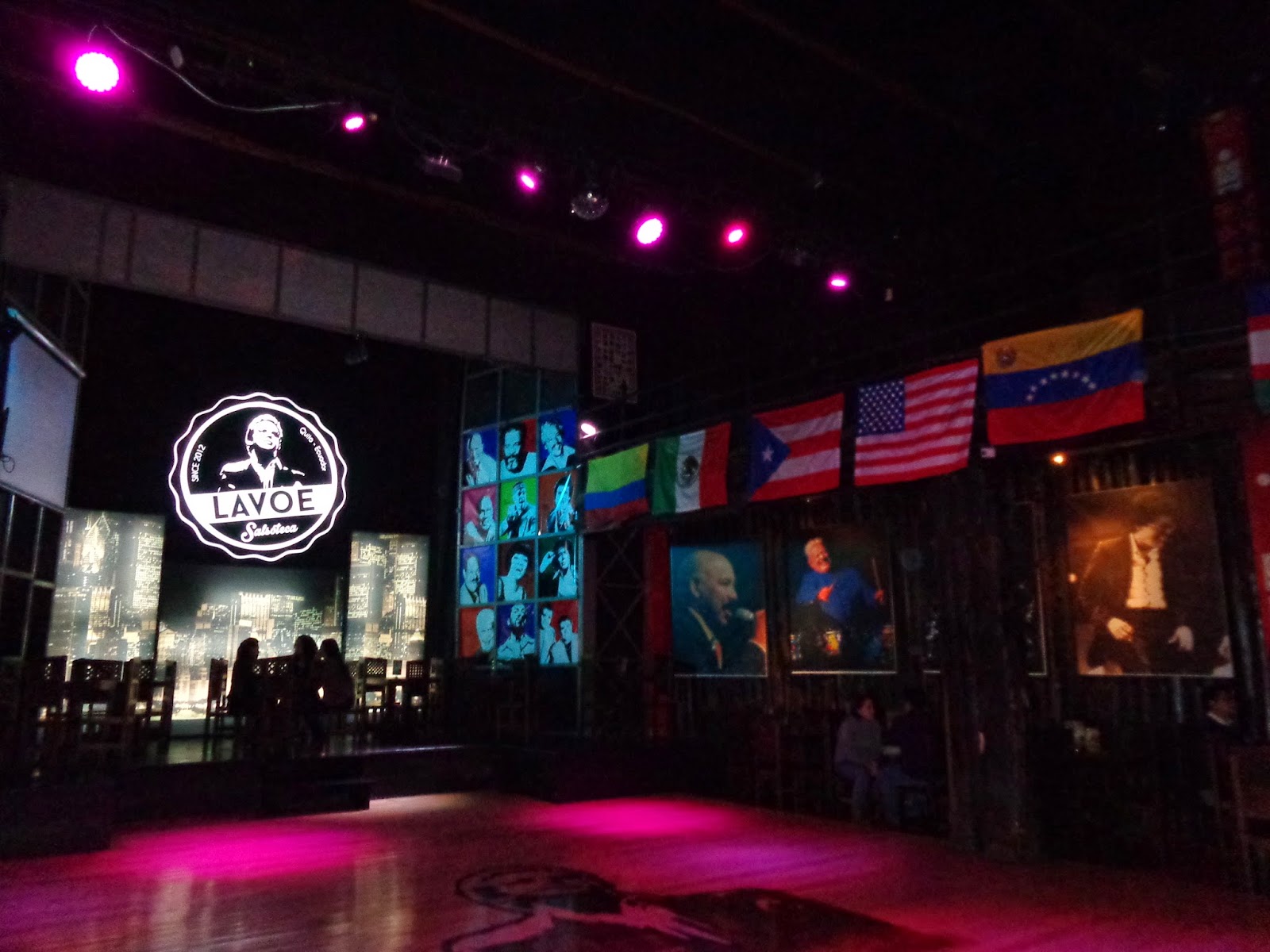 On the walls there were posters of more salsa legends and it was interesting checking them out as we waited for the club to fill up. Entrance was free before 10:30 so you know I was there before then, any opportunity to save money can not be taken for granted. 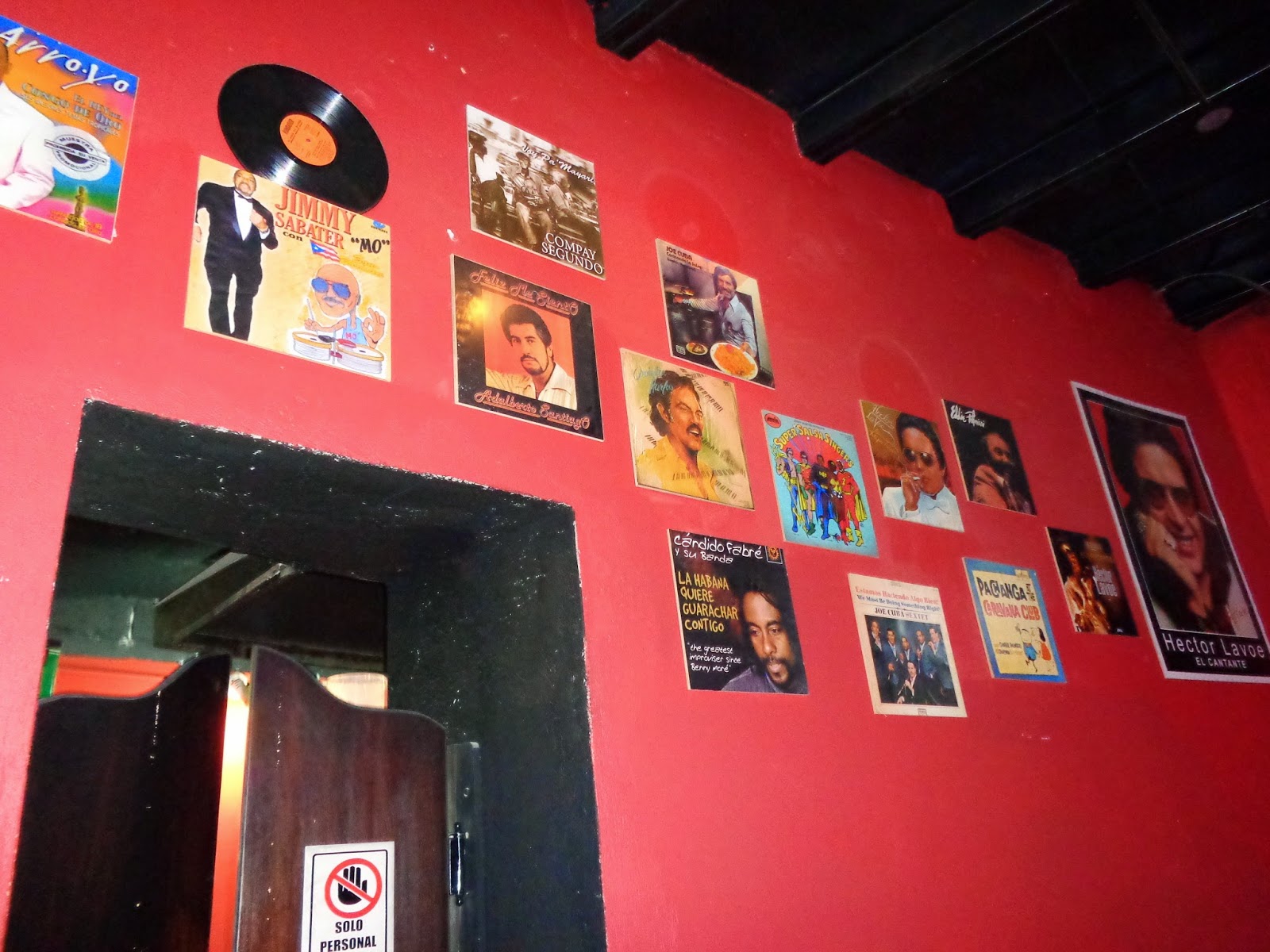 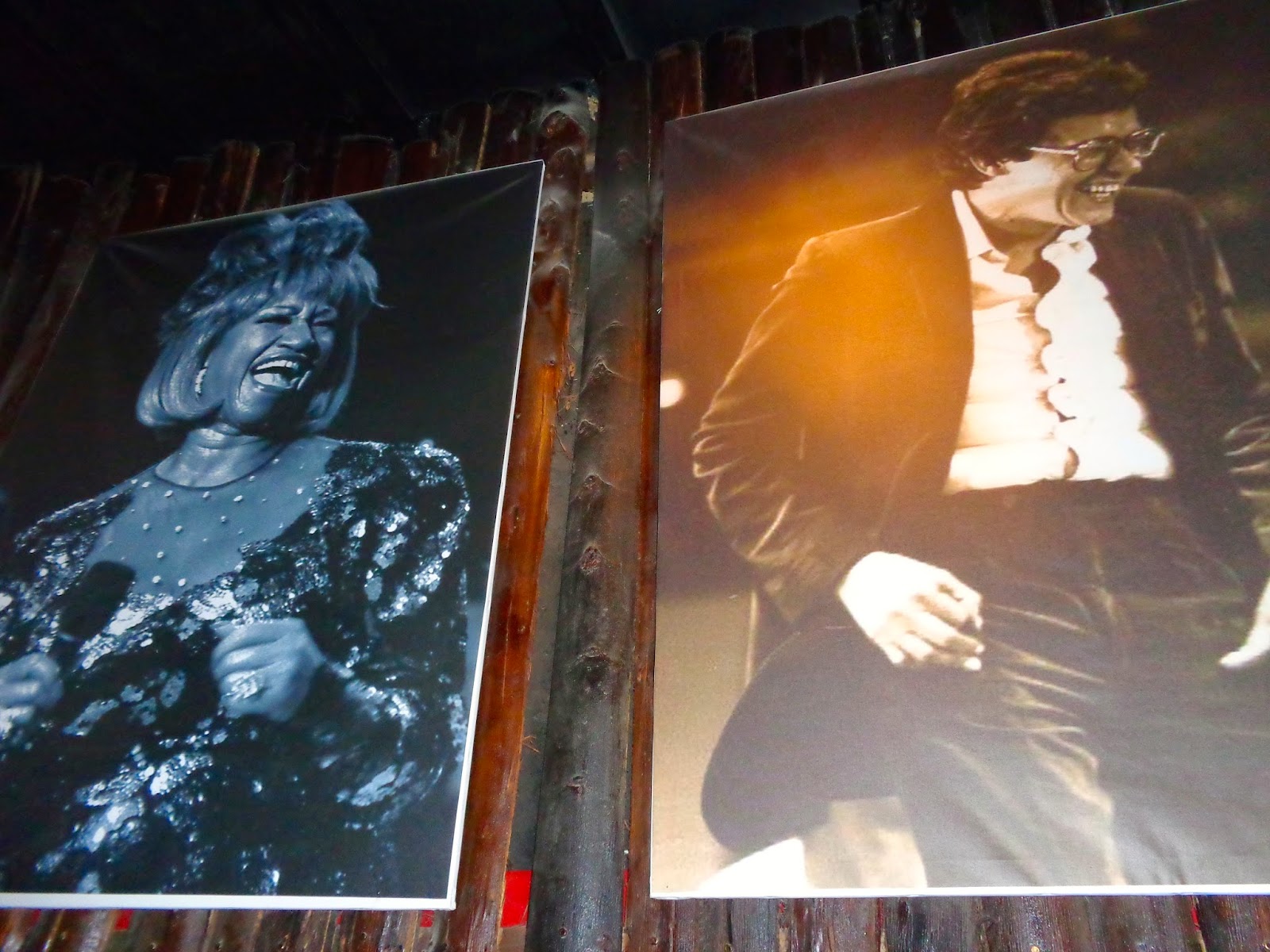 The club started filling up as the night progressed and I got to see some really good dancers. To be honest I felt a bit intimidated watching all the fancy turns and footworks from many of the dancers. A lot of them seemed to be professionals, the theme of the night was salsa brava after all. I noticed that everyone seemed to know each other and only danced within their circle of friends, It actually felt a bit cliquish but it was fun watching some of the amazing dancers. 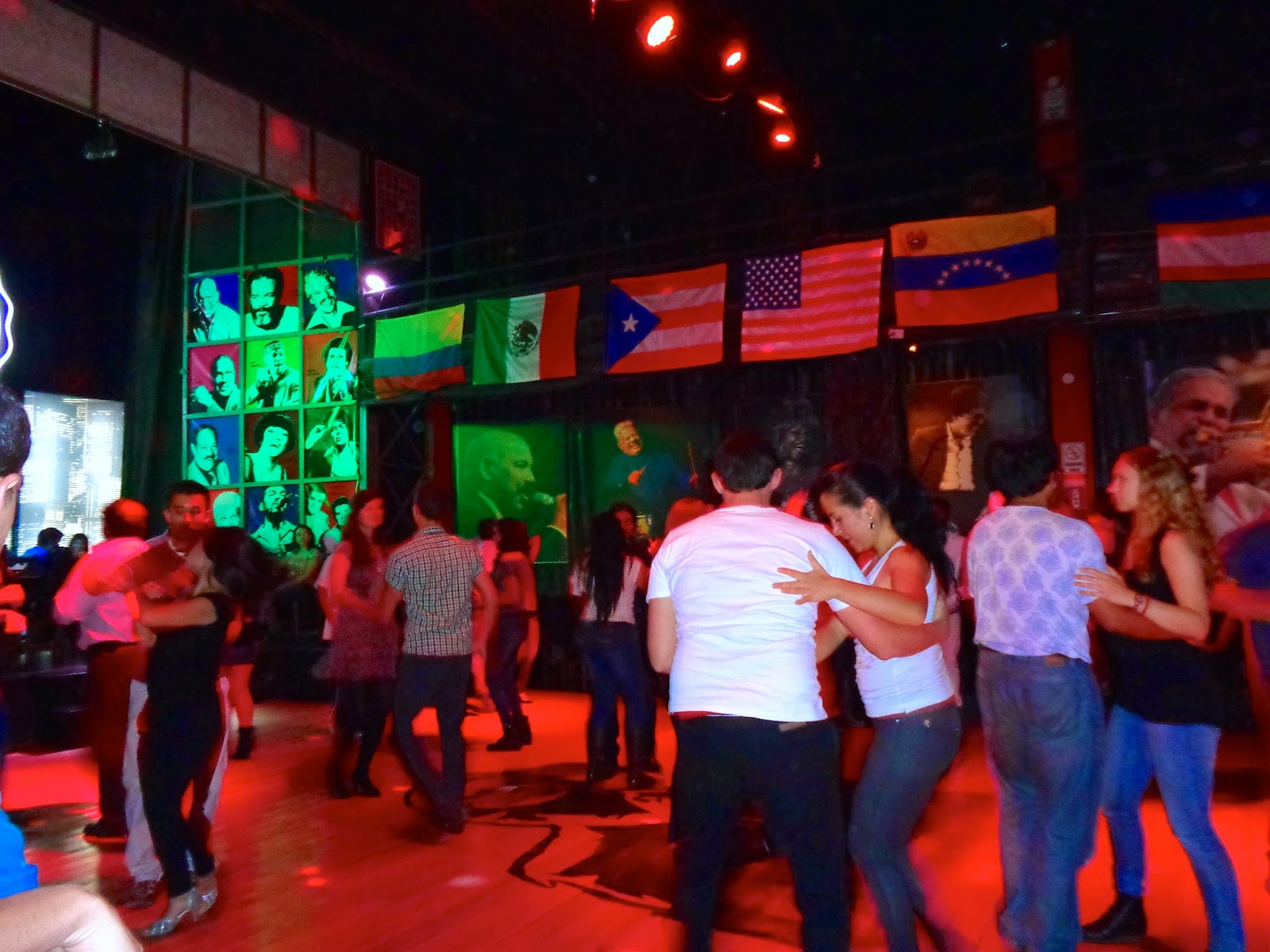 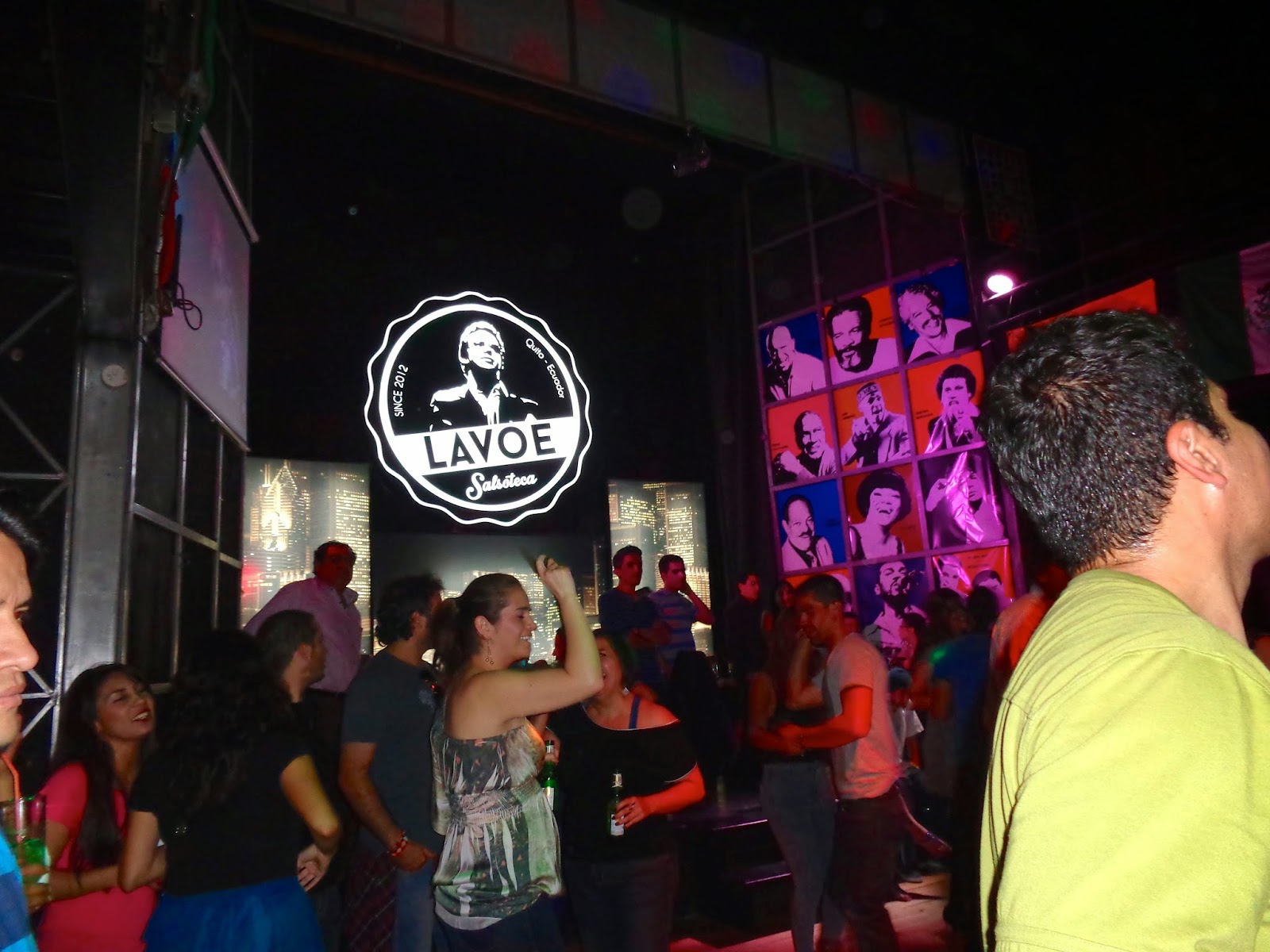 We didn't stay for too long because my friend had to work the next morning so we called it a night but not before goofing around......... 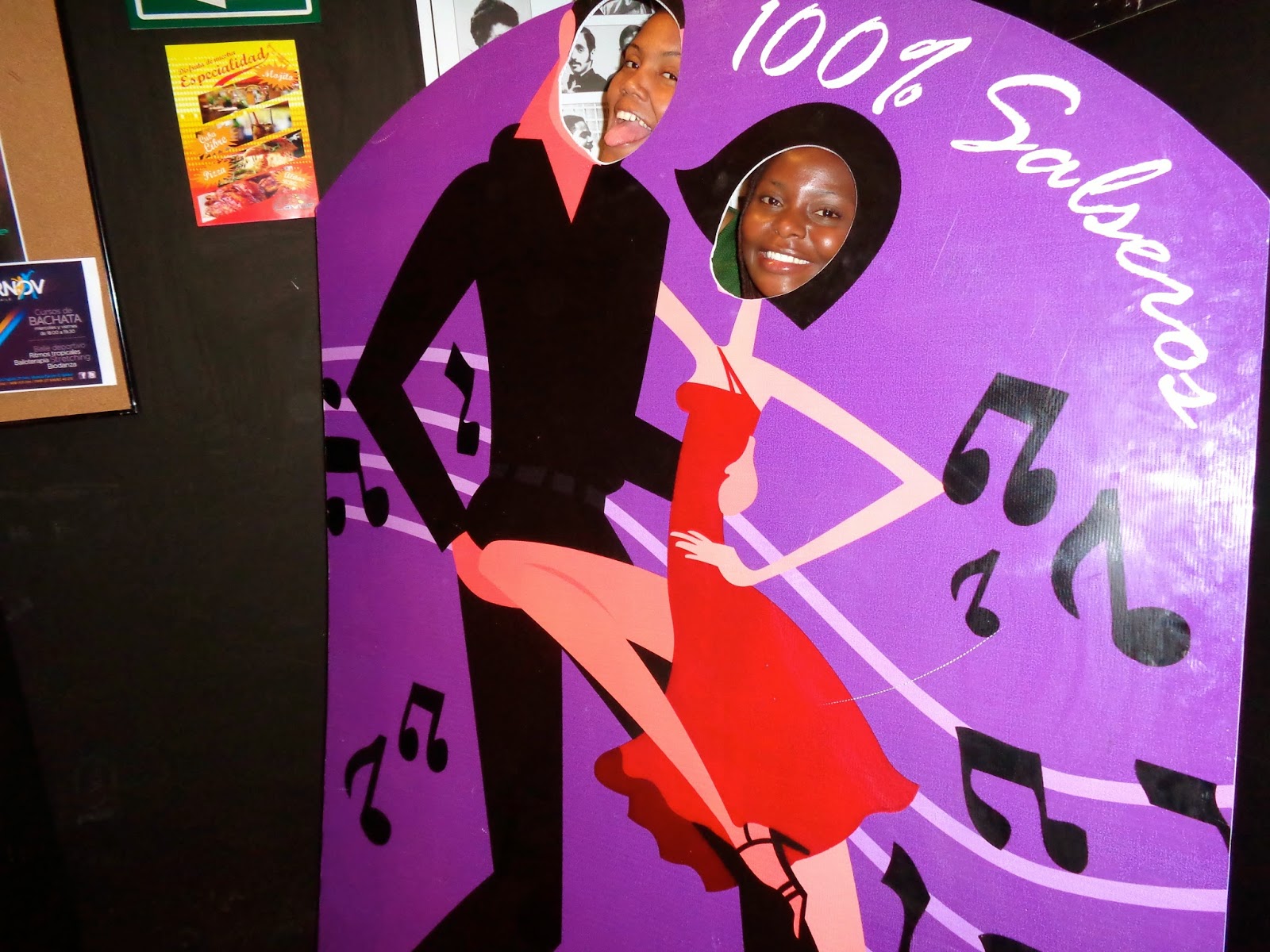 The following night which was a Thursday I decided to give Lavoe another chance to see how the crowd and music would be like. The theme of that night was salsa romantica and bachata. I had no one to go with so I decided to go alone. As usual I made it to the club before they started charging entry so it was a bit empty but there was good music playing and that kept me entertained. 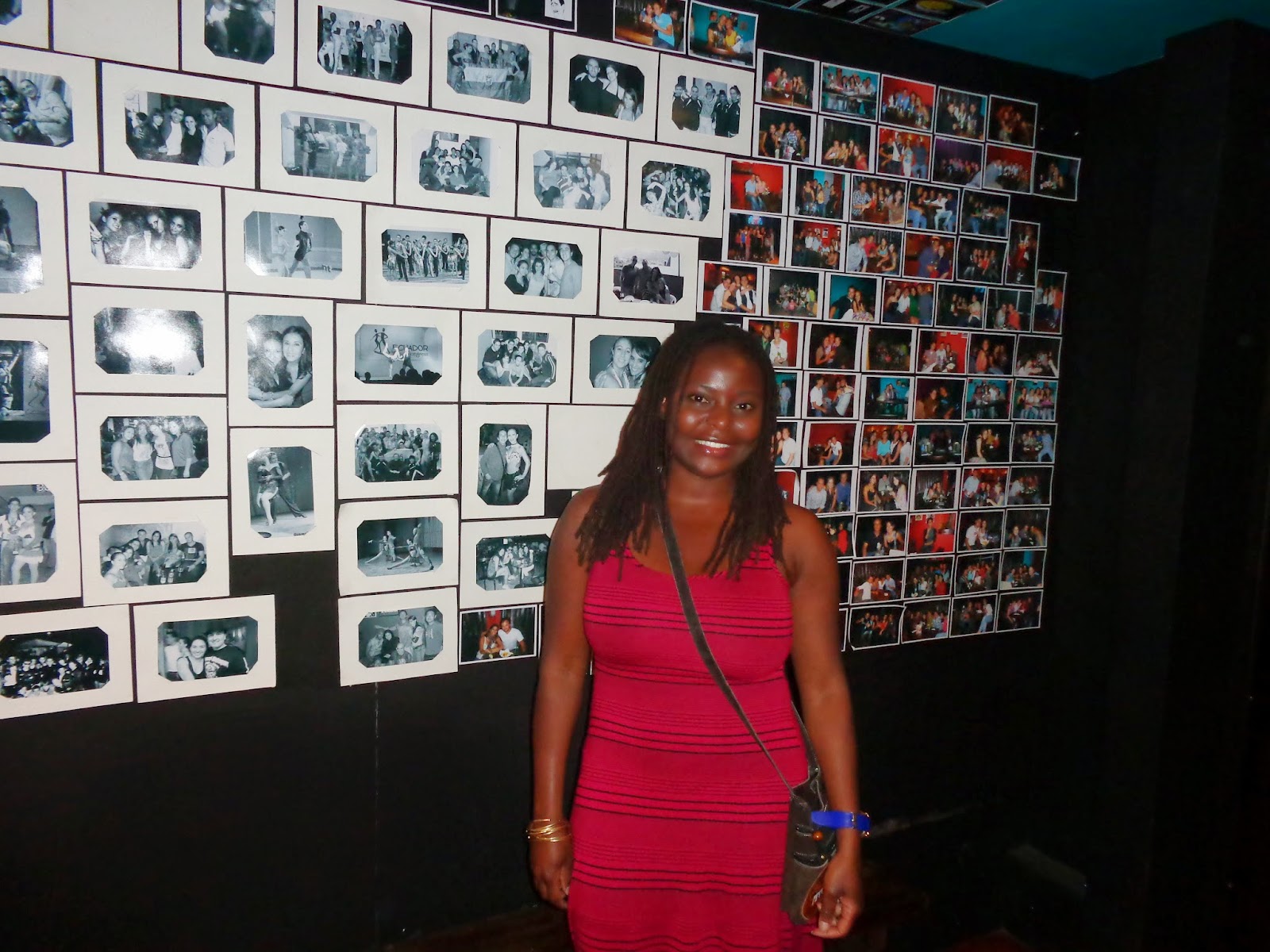 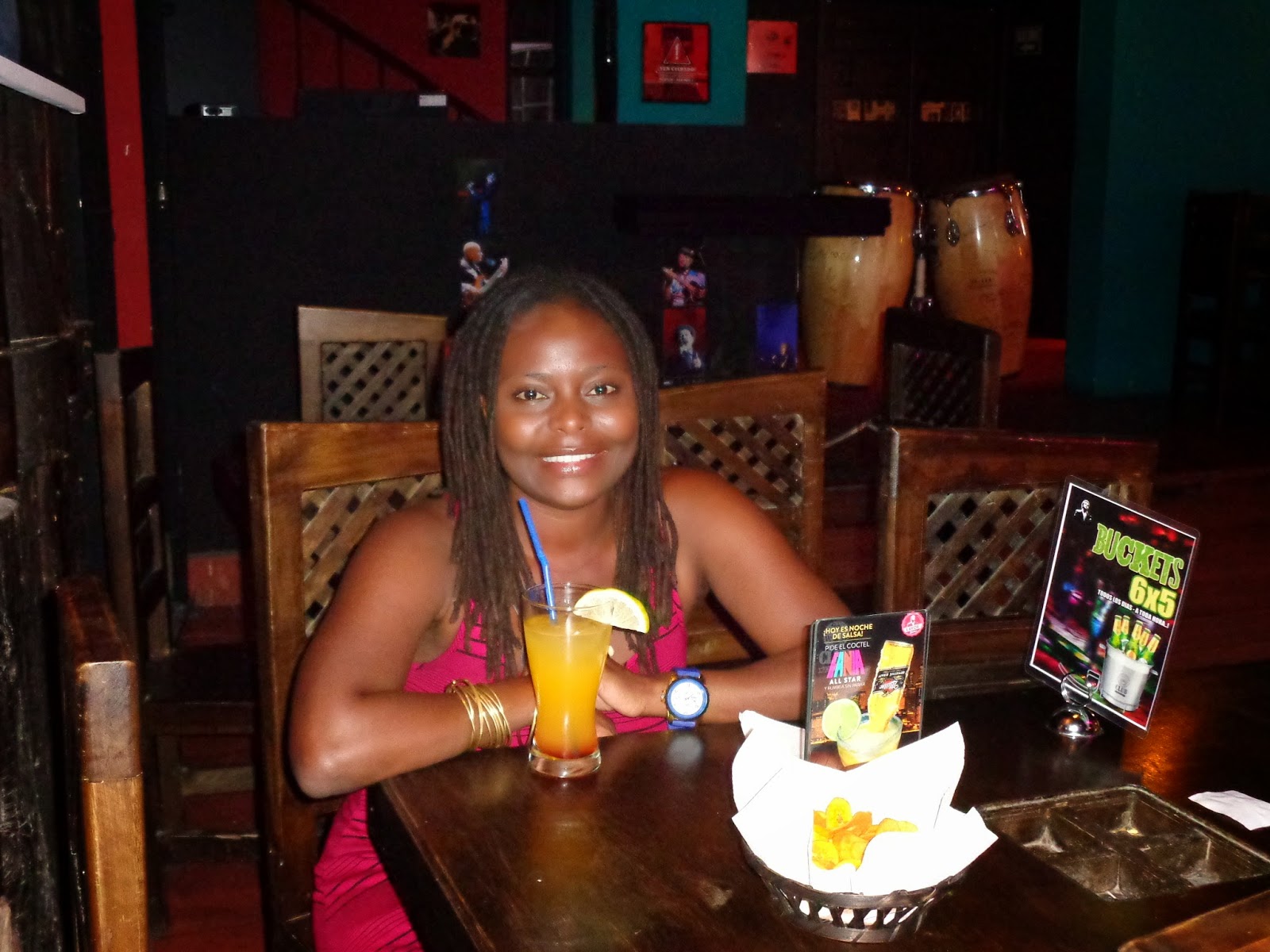 Bar none! these were the best plantain chips I have ever had, just writing about them makes me want to take a taxi to Lavoe for the sole purpose of getting these goodies. Yes! they are that TASTY! and best part of it is, they were free. 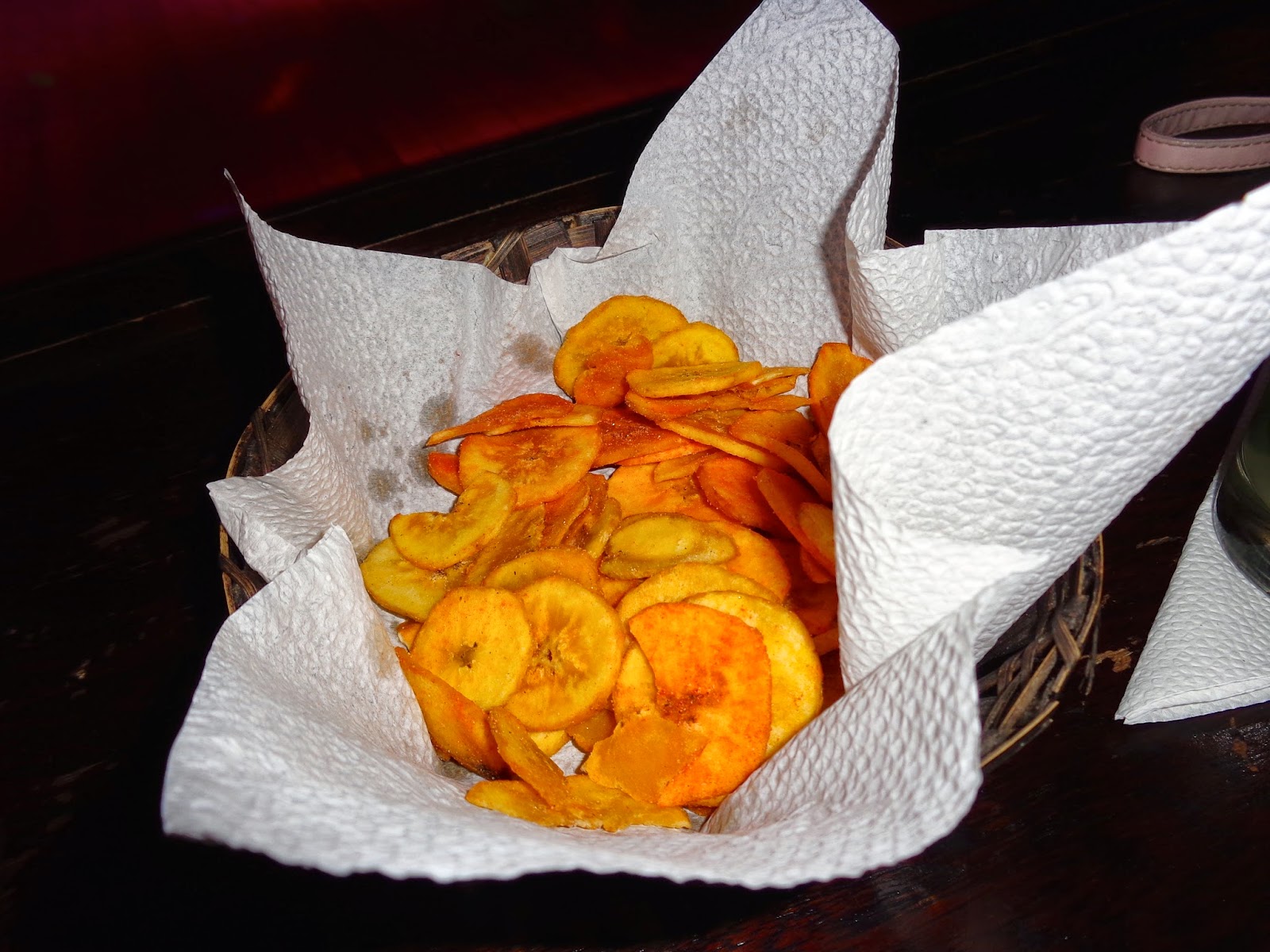 The club filled up as the night progressed and unfortunately it seemed like everyone was part of a couple so I never got anyone to dance with. Those who were not part of a couple only danced with the people they seemed to know and once again, there was that cliquish vibe going on and I felt uncomfortable and intimidated about asking someone to dance. I stayed on for about 3 hours before calling it a night, what can I say? sometimes you just don't get lucky on the dance floor and that night was one of those unlucky nights, On the dance floor........don't get any other ideas.

That's it folks, would I go back to Lavoe again? nope! unless I have a partner to dance with or I am with a friend. I would go in a heartbeat for those plantain chips though. Don't get me wrong, the club is fabulous with a well sized dance floor, very good customer service and great music but the crowd just didn't seem too open in my opinion. I think I will stick to the tiny salsa clubs in the touristy La Mariscal area where the vibe is more down to earth.

During my travels I have learned never to depend on anyone to make things happen, If I want to do something or go somewhere I just do it. If I have company great, if I don't that's fine too.

I have interacted with different people from different backgrounds here in Ecuador and it's interesting to see how things are on each side of the fence. Take for instance these group of girls I met not too long ago and who introduced me to their circle of friends. They all seemed to have come from very well off families, had traveled extensively, had studied abroad and seemed to have very comfortable lives. Money seems like the least of their worries and one of the girls even mentioned how she had traveled to Miami to buy her wedding dress and was so proud that it only cost a mere $5000. I almost choked on my drink as I remembered earlier on chatting with a taxi driver who works 16 hours a day so he can afford to keep his two daughters in a better school. Guess how much he needs for each kid every month for school? $150! that's $300 total. Such is life indeed.

Not that I am against anyone wanting to spend however much they want or can afford on their wedding dress but personally if I was to ever get married I am hitting David's Bridal where I can get a gown for less than $500. I would rather splurge on other things like a down payment on a house or an amazing and unforgettable "Round The World" honeymoon trip. To each their own.

A couple of days ago I bought these really cute panties and I was so excited to get home and try them. Unfortunately things didn't turn out as I expected, I didn't know whether to laugh or cry at the end.....laugh because of how off the mark I had been about the size of my butt (talk about under estimation) or cry because I now have these cute panties that I can not wear and it's not like I can return them to the store, Le sigh! By the way when I say cry it's just a figure of speech, it's not that serious.

It's funny that a lot of times I am mistaken for Dominican or Colombian by some people, until they hear my accent. I can not tell you the number of times I have been asked that. I don't know how these assumptions come up but I find it interesting. PS: In case you didn't know, Colombia has a huge black population.

One time these two guys stopped me on the street and of course they asked if I was Colombian or Dominican, I told them I am Kenyan. I swear and I am not even exaggerating, one of the dudes almost knelt down as he shook my hand with excitement and to my utter shock said in English, "My sister ooh! I am from Nigeria!" while the other one reached out for a hug saying, "you are our sister!" The first thought that crossed my mind was, "dang! is it that serious?" the second was.....okay I can't remember what the second thought was but I have to admit though, the whole incidence was pretty funny and dramatic but I understood where they were coming from. We ended up chatting for a while before I had to rush off because I was going to class.

I am a big fan of Humans of New York on Facebook and I have discovered other Humans of (insert city here) Facebook pages. Today I just came across Humans of Tehran and I ended up reading all their posts on FB. Now I have this new fascination and budding curiosity to visit Iran.