Made It to The Jungle & Back

What can I say? my adventurous voice spoke louder than my high maintenance voice and I found myself waking up early to go meet up with the tour company I had booked a jungle tour with. I was a bit nervous because I didn't know what to expect but I resisted the temptation to cancel the tour. There were about 12 other people in the whole group and we were all given boots to wear before proceeding with our trip, at that point I kept thinking "what the hell have I got myself into?"

We left at about 9:30 in the morning with two guides and a driver, the drive was going to take two hours but we made the first stop at a monkey reservation......or something of the sort, I really don't know what other description to use. Personally I am not into seeing animals in cages or any form of captivity so I wasn't really that excited but it was part of the whole tour. We stuck around the reservation for about 20 minutes then left to continue with our journey. 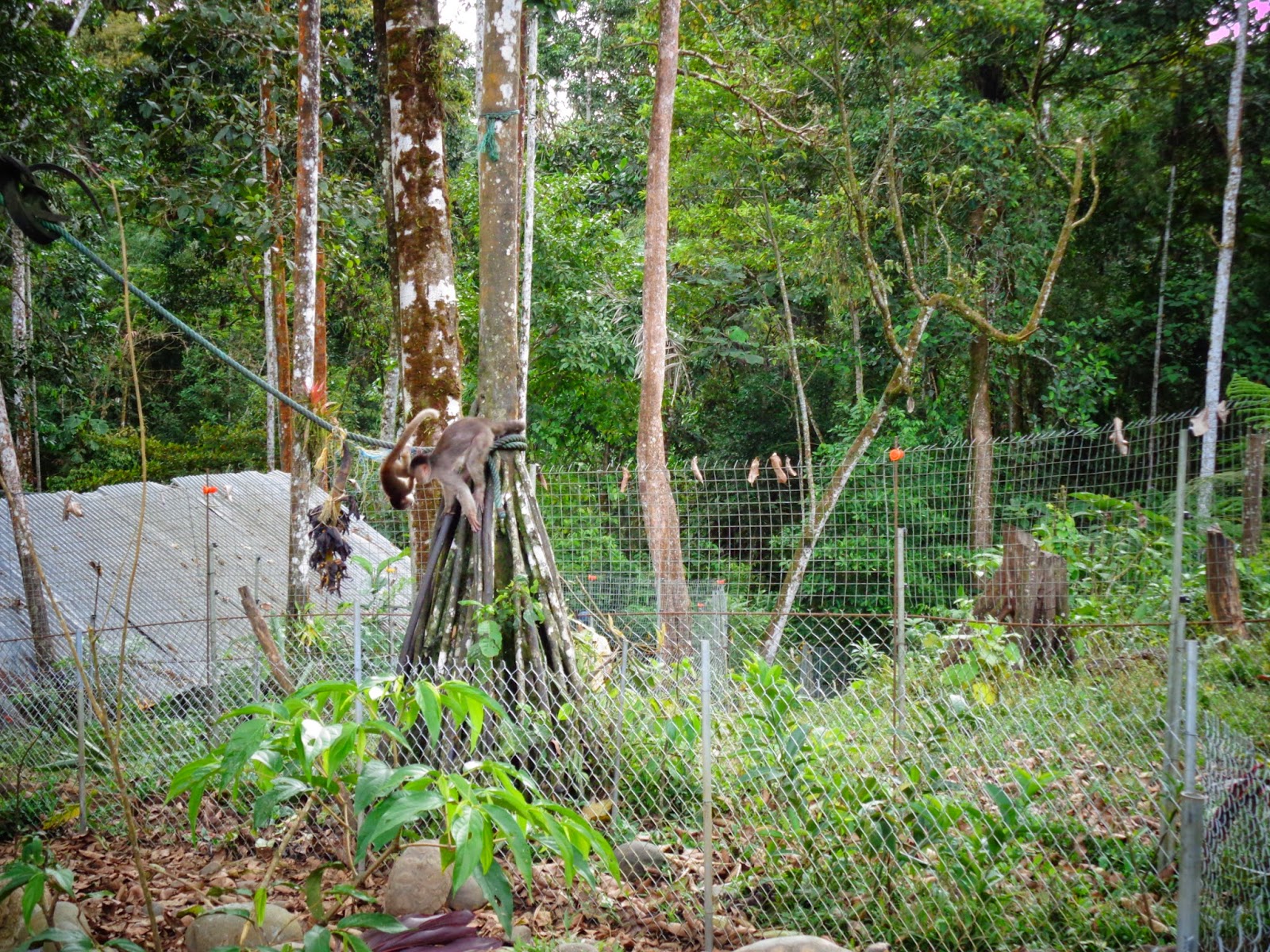 Next stop was at an indigenous village and we got to learn a little about their culture. We tasted the local brew chicha which was being passed around, I had first tasted it in Peru when a couple of years ago and I remember not liking it at all. Maybe my tastebuds had already forgotten because I didn't mind the drink this time around. 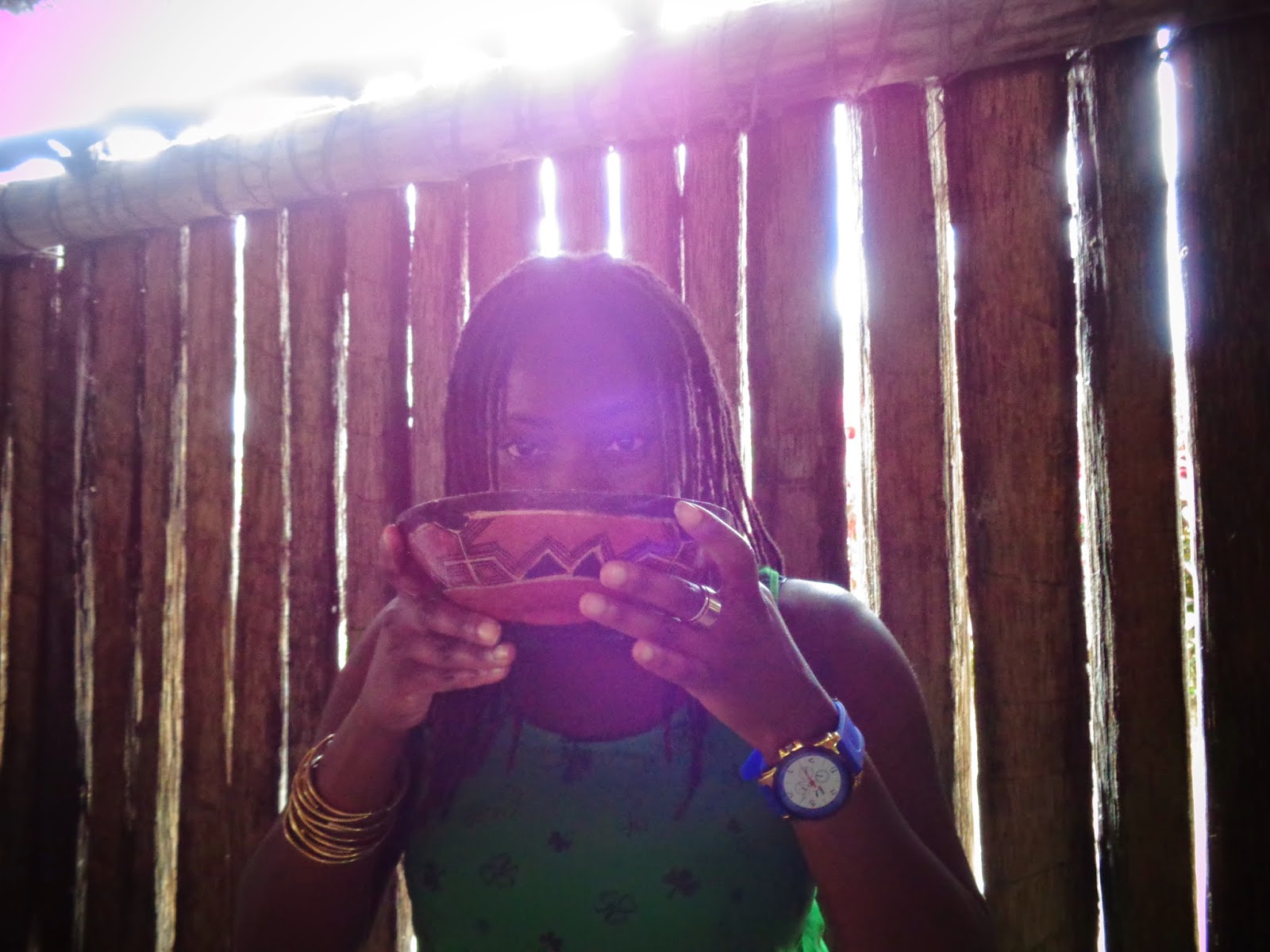 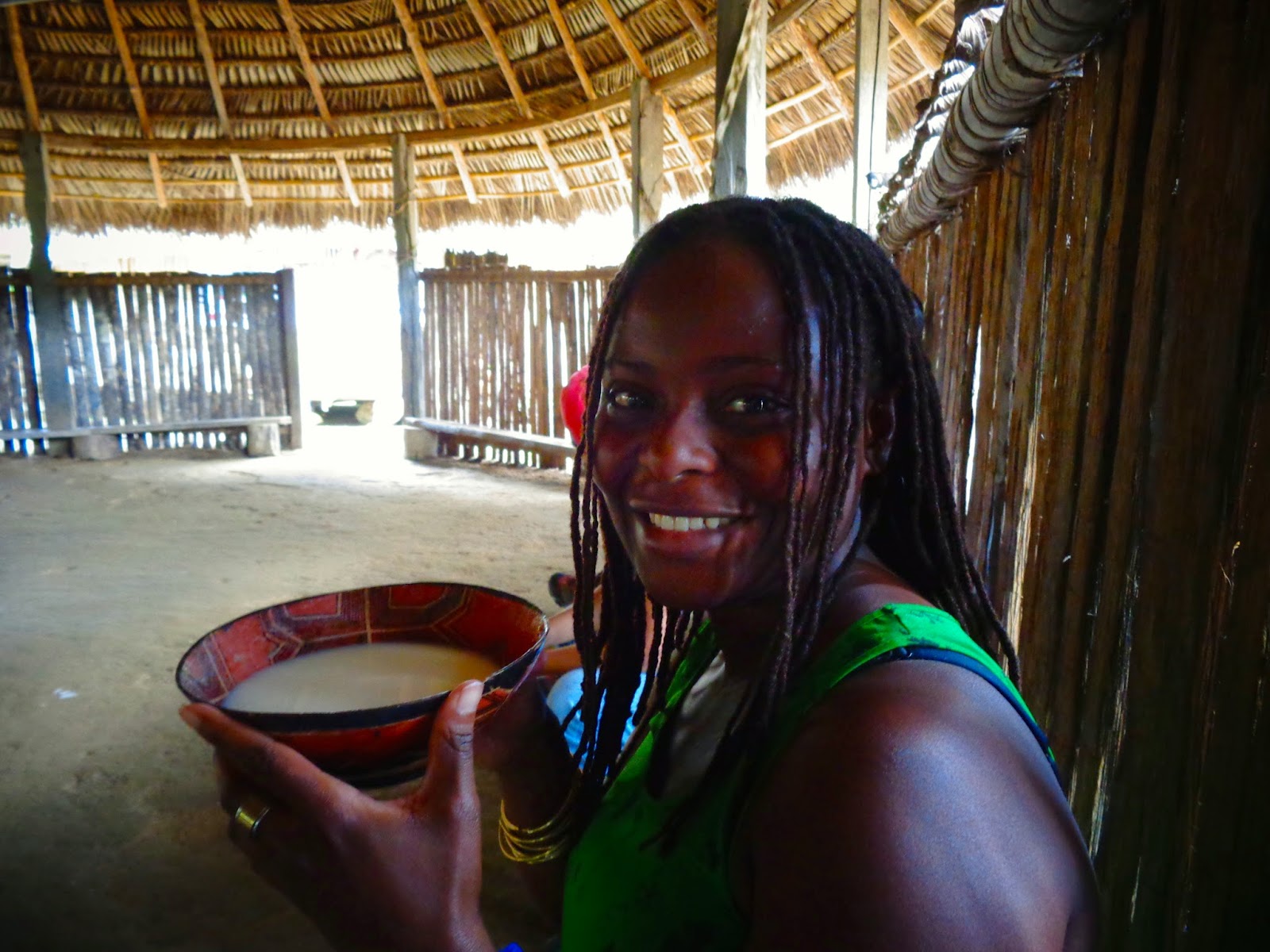 We also got to shoot arrows using the long pipe you see in the picture below. A small arrow is placed on one end and you blow on the other, believe it or not I did not realize when I shot my arrow because when I blew on one end I didn't see anything coming out so I kept blowing until the guide laughed and told me I had already fired the arrow. Okay, I can so see how my last description can be taken out of context, get your minds out of the gutter if you are thinking of something else......let me get mine out first! 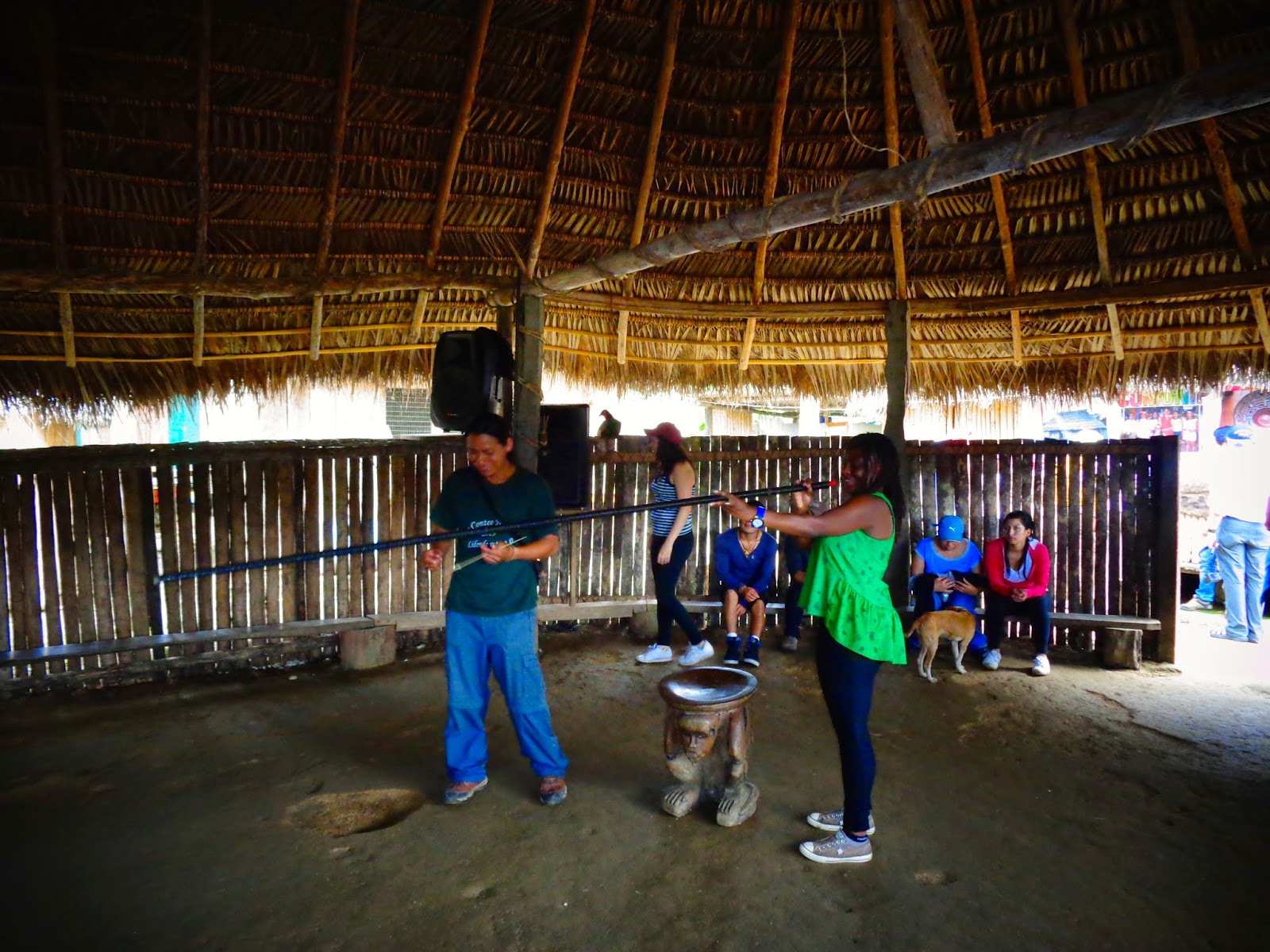 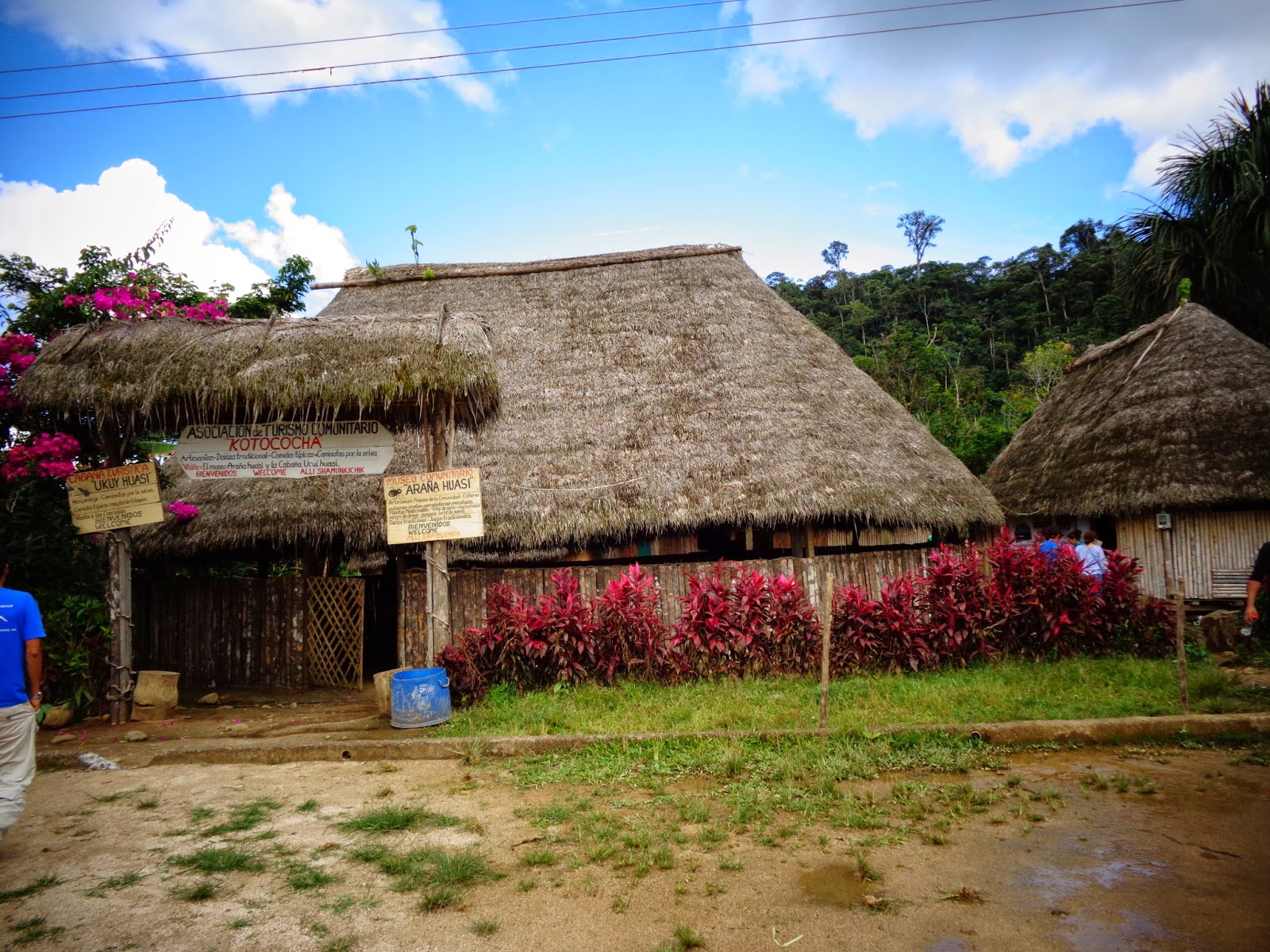 After visiting the village we went on a canoe ride which was pretty scary because the boat kept leaning on one side and I was sure we were going to fall into the river. At some parts of the river the current was pretty strong so water would splash us and fill the canoe, at other parts the rocks under the water would get the canoe jammed so the guy handling it would have to get into the water and push the canoe out of the jam. I could not wait for the ride to end! don't get me wrong, the scenery was beautiful and when the canoe was gliding smoothly through the water it was bliss but the high chance of falling into the water was scary considering I had my purse with me and it had my camera among other things. 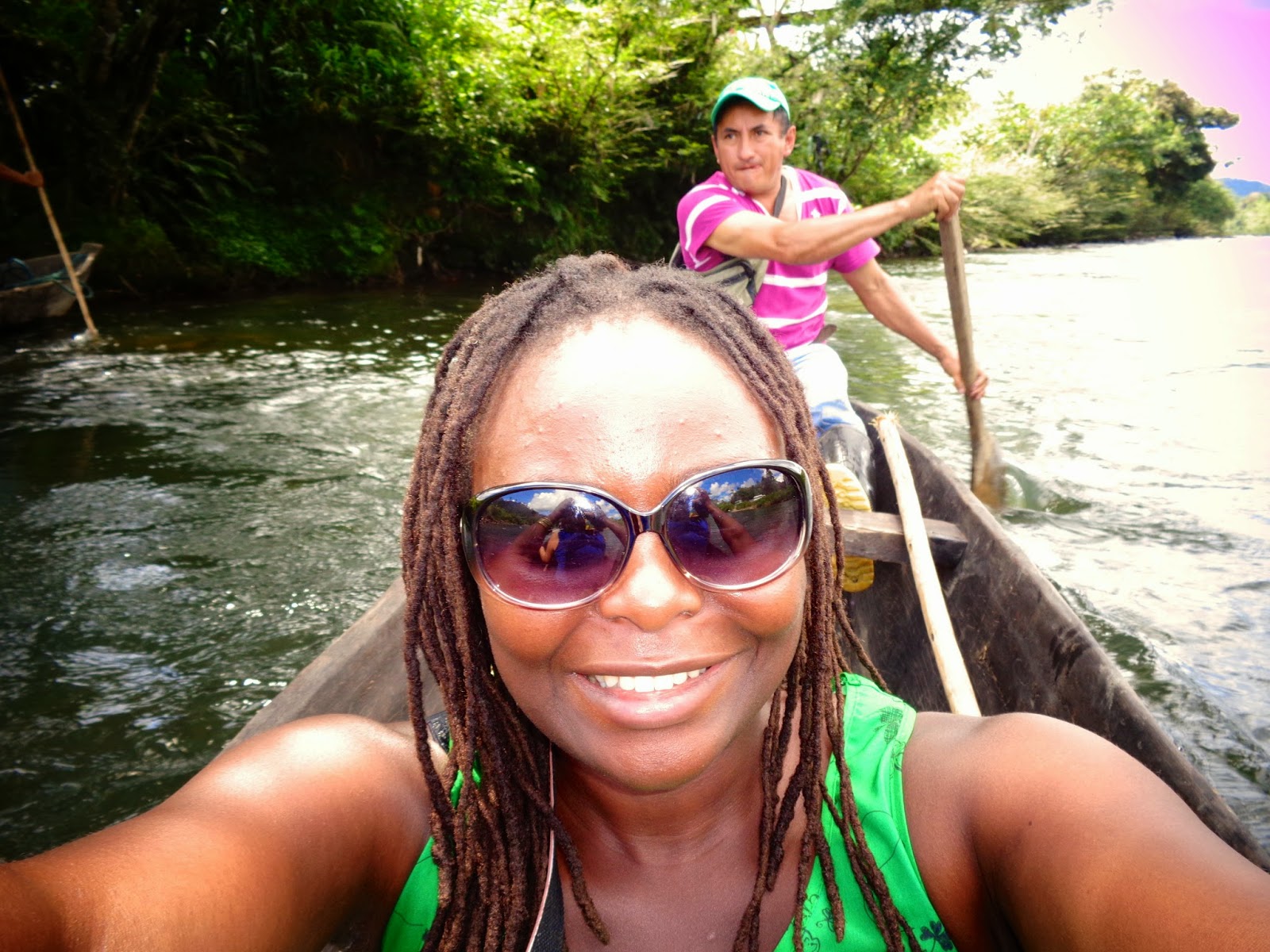 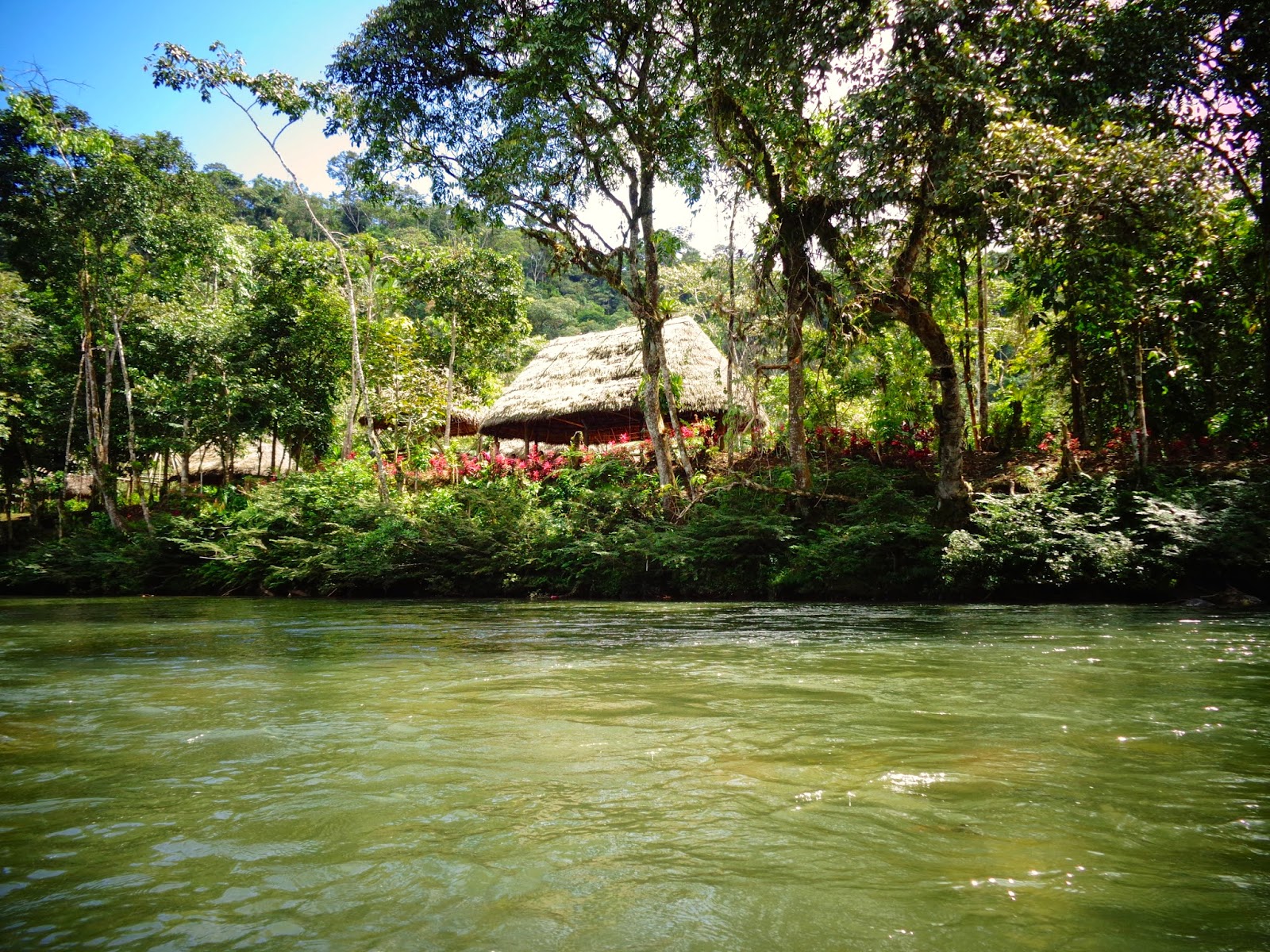 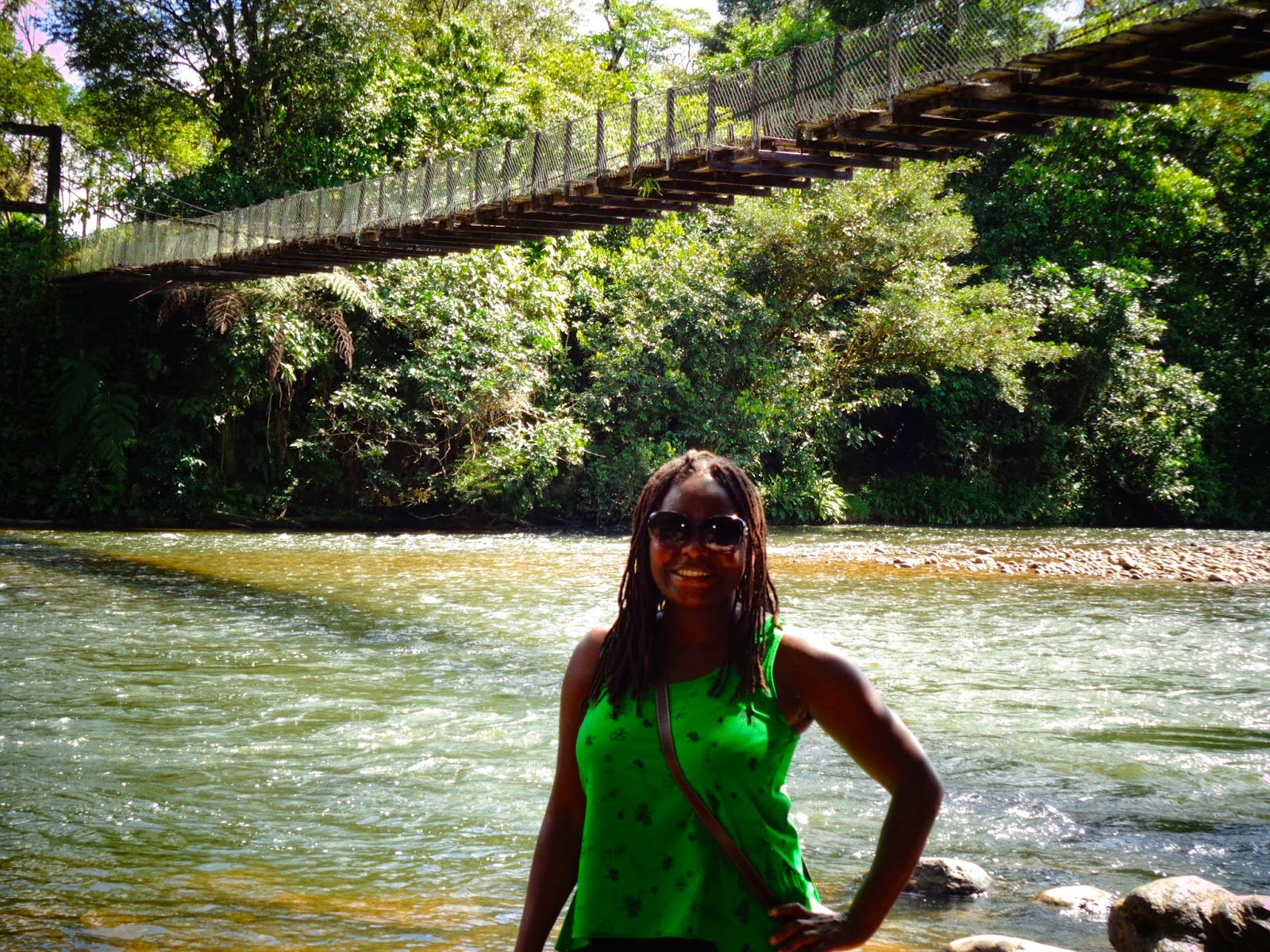 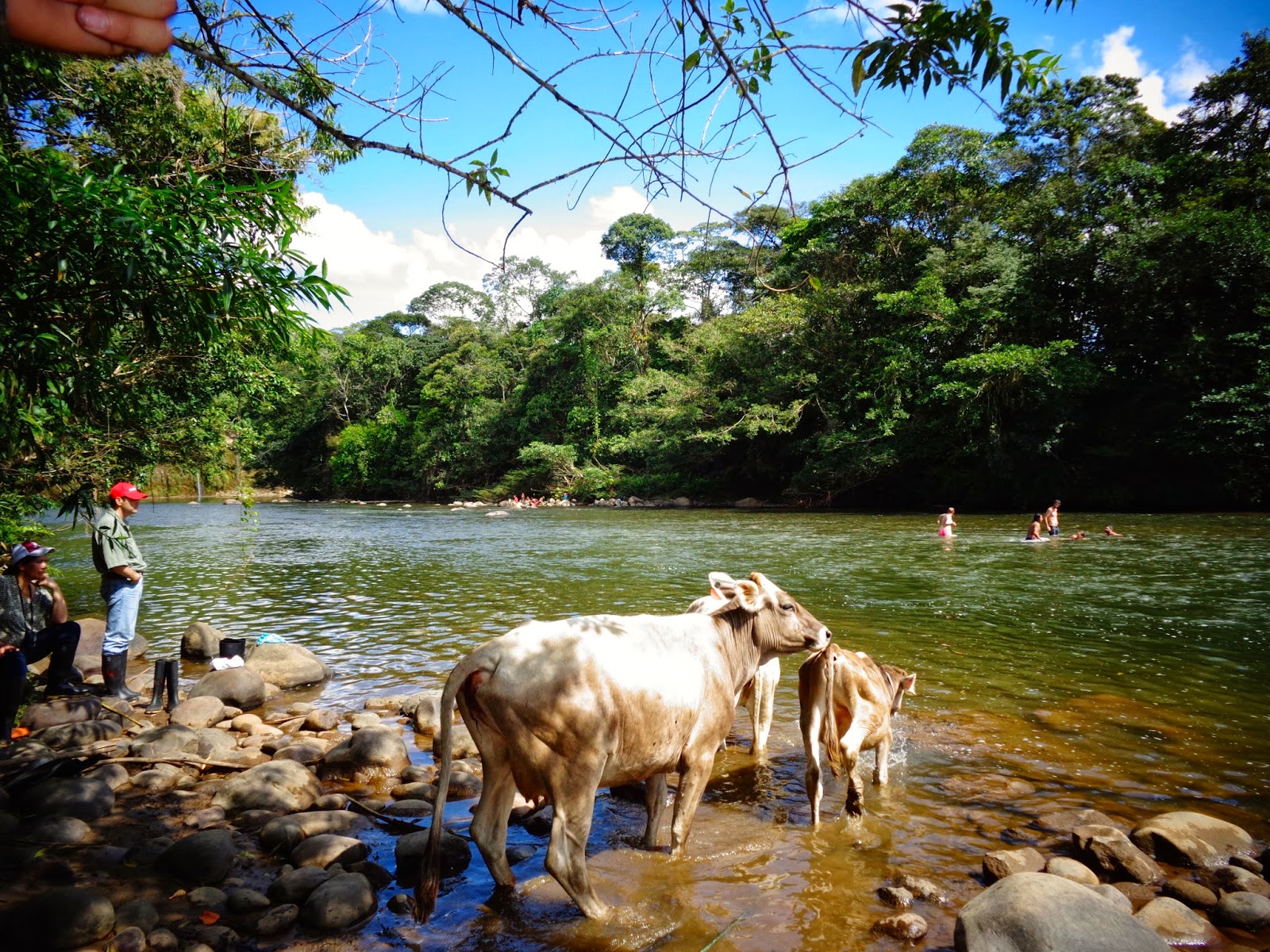 Luckily the canoe never capsized and we landed on shore safely, a bit wet but safe and that's all that mattered. After the canoe ride the guide took us to this amazing place high up in the hills where we could get some amazing views of the surrounding area and swing over the hill, check me out below. It was scary swinging over the hill and the adrenaline rush was crazy! I was shaking while getting on the swing and even after I landed I was still shaking. 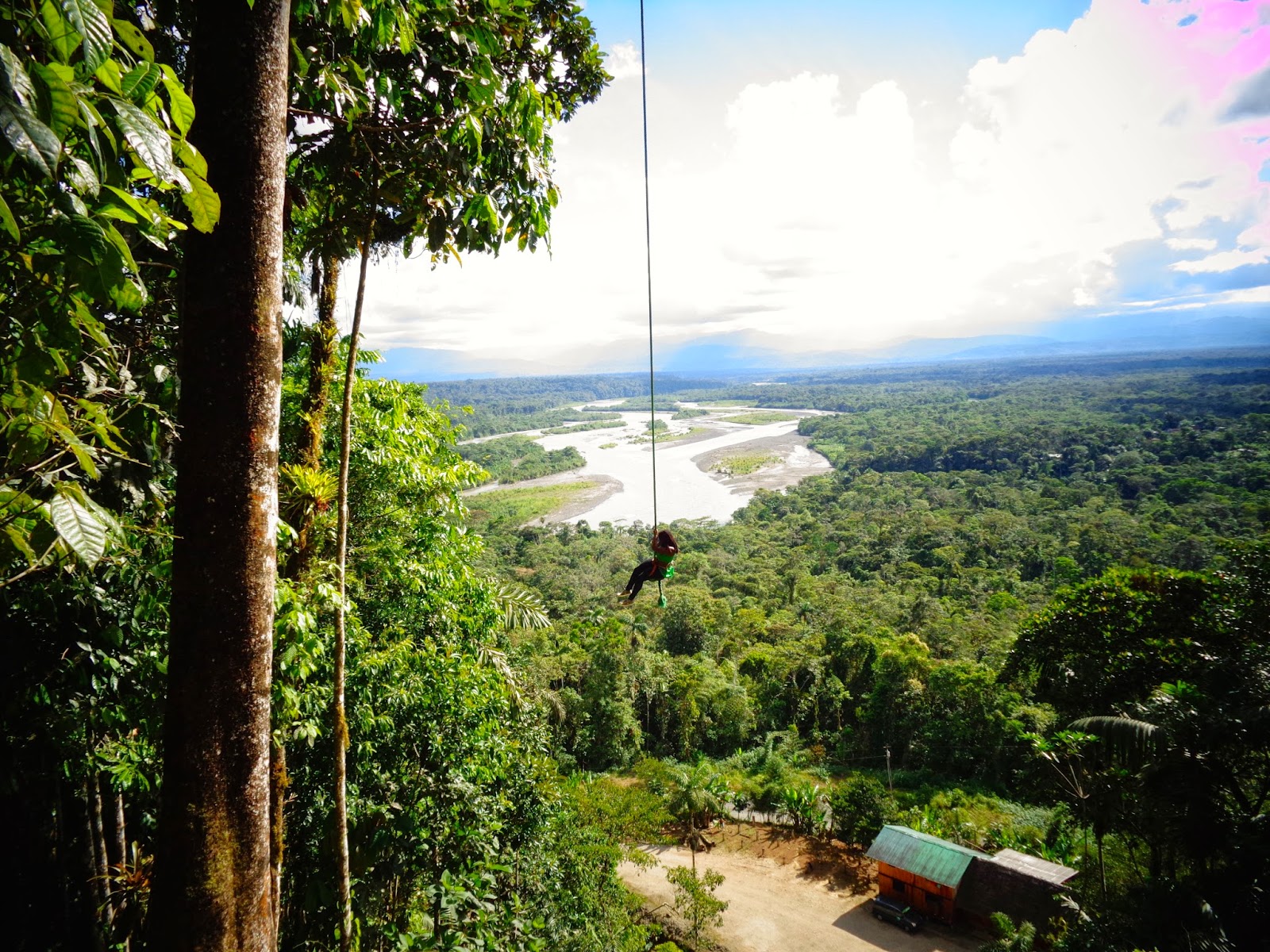 These caves were pretty unique and some had bats inside. 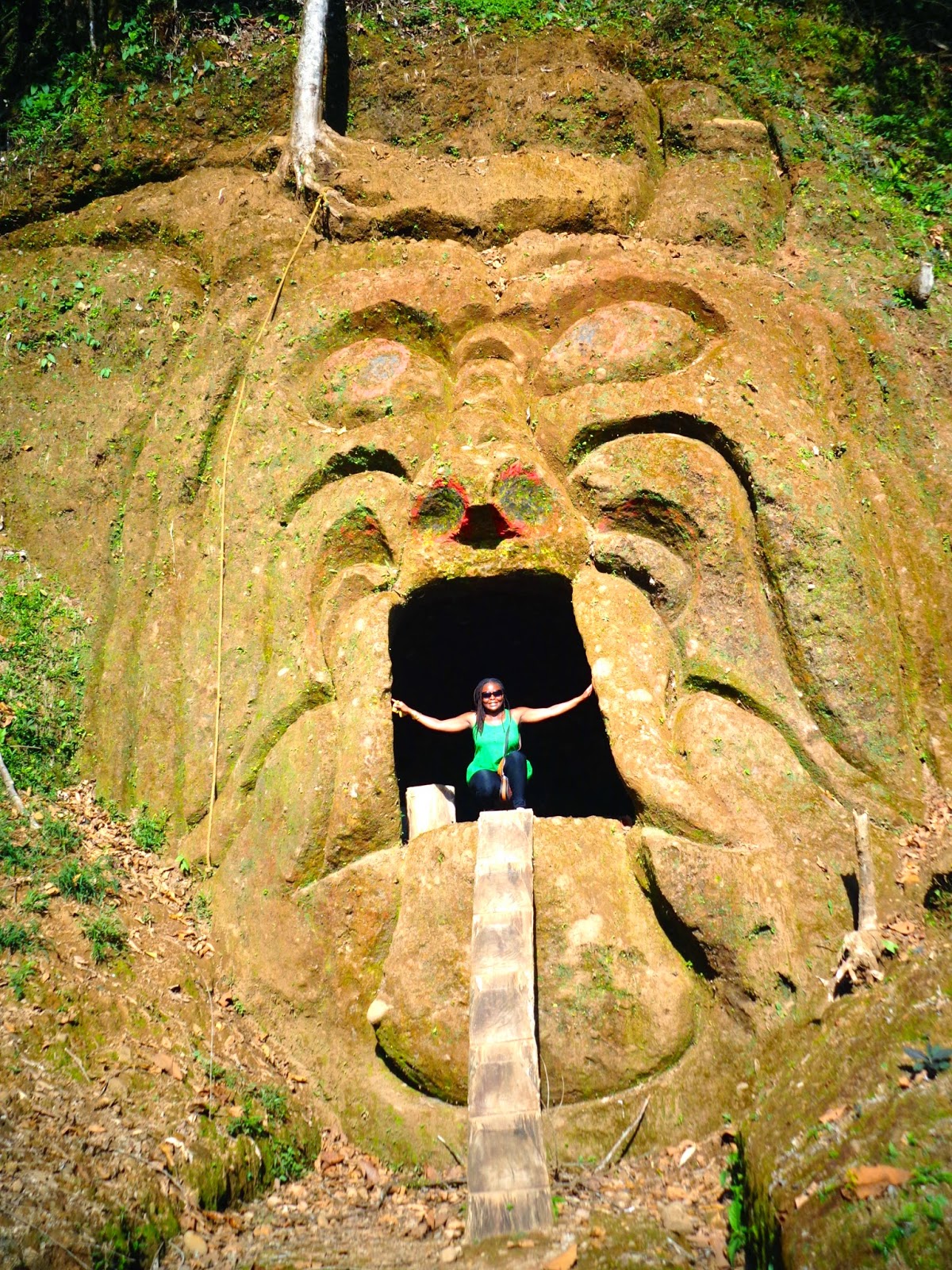 After our adrenaline filled adventure we had lunch and at that point I was like, "for a jungle tour this hasn't really been bad, it's actually been tamer than I expected." You can imagine my surprise when the guide told us we weren't done yet, we were going to trek into the jungle until we reached this beautiful waterfall where we could swim or just relax.

Once we drove to the starting point and I saw the dude disappearing into a thicket while motioning us to follow him I was like, "holly crap! shit just got real." You should have seen how frantically I applied repellant. Along the way the guide would stop and tell us about some of the plants or little bugs we came across, it's amazing what nature has to offer. From plants that you can use for: scent, temporary tattooing, medicine and as spice for food to clay that is usually used as a natural exfoliant. This place seemed to have it all!

Now you know once I heard how beneficial the clay is to the skin I had to try it right? My skin actually felt smoother after I washed it off. 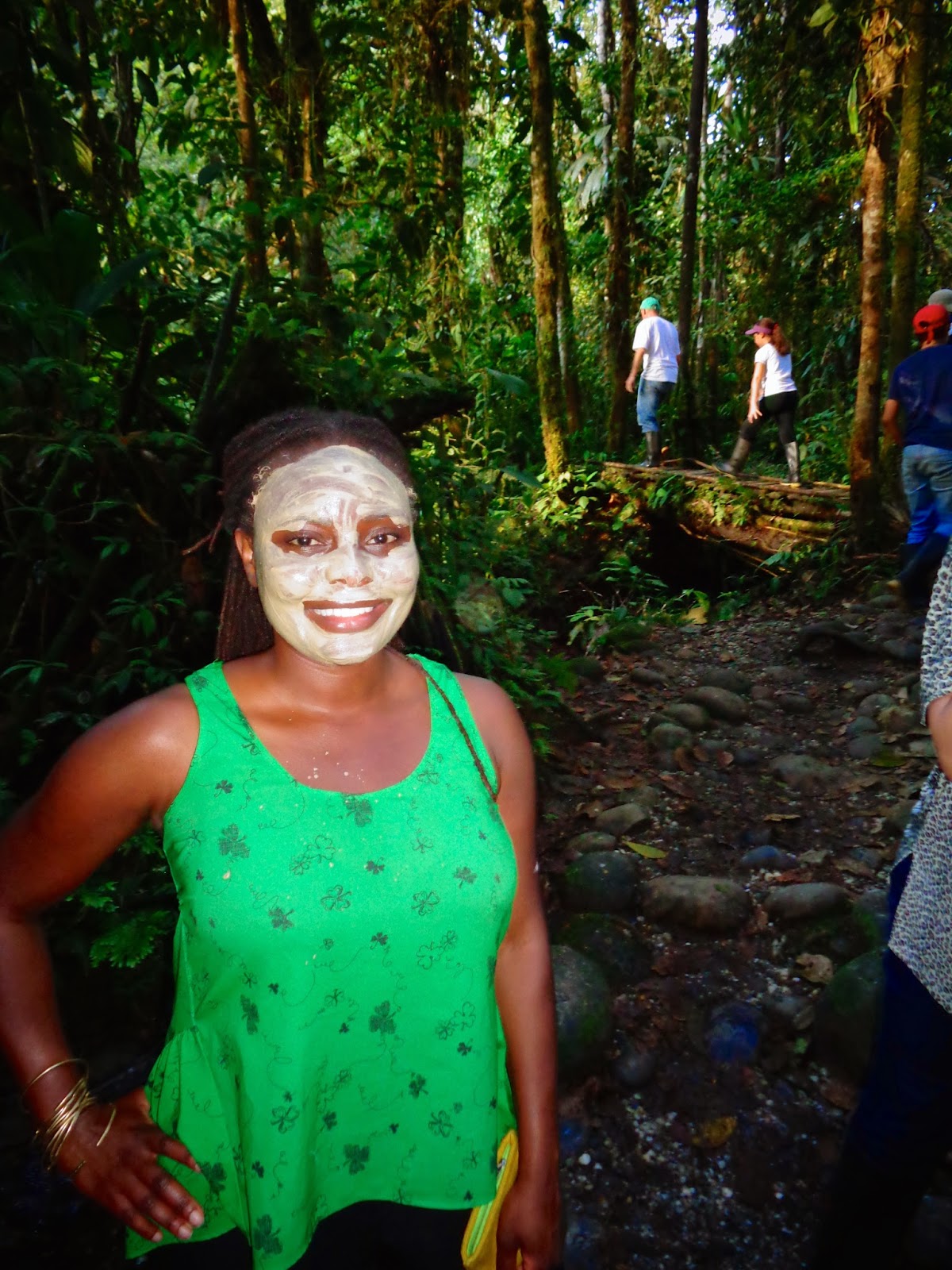 Check out the temporary tattoo I got from a leaf. All the guide did was press the leaf on my skin and voila! 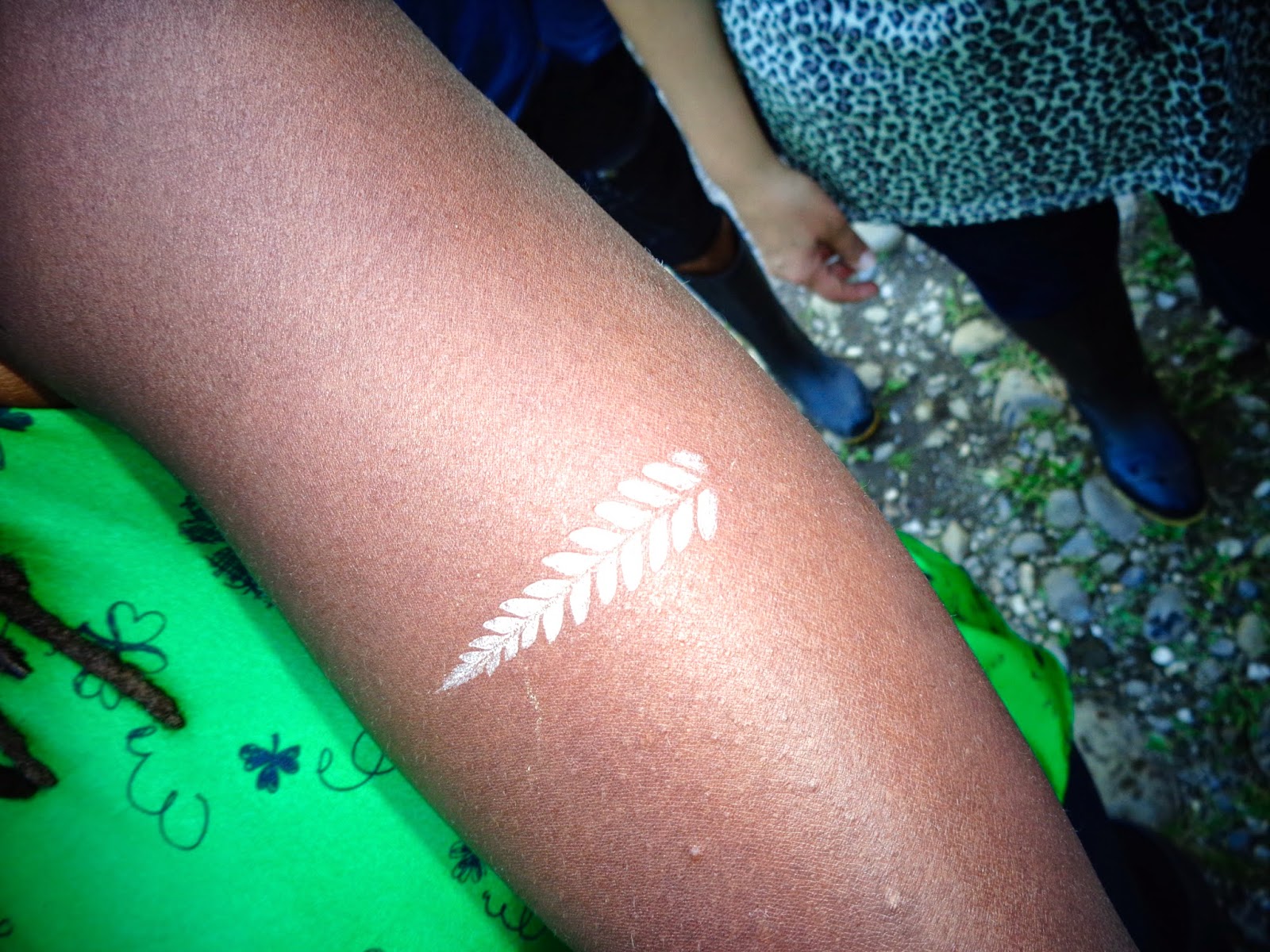 We continued trekking through the thicket and crossed various small rivers, the scenery was very beautiful and I actually enjoyed the trek. 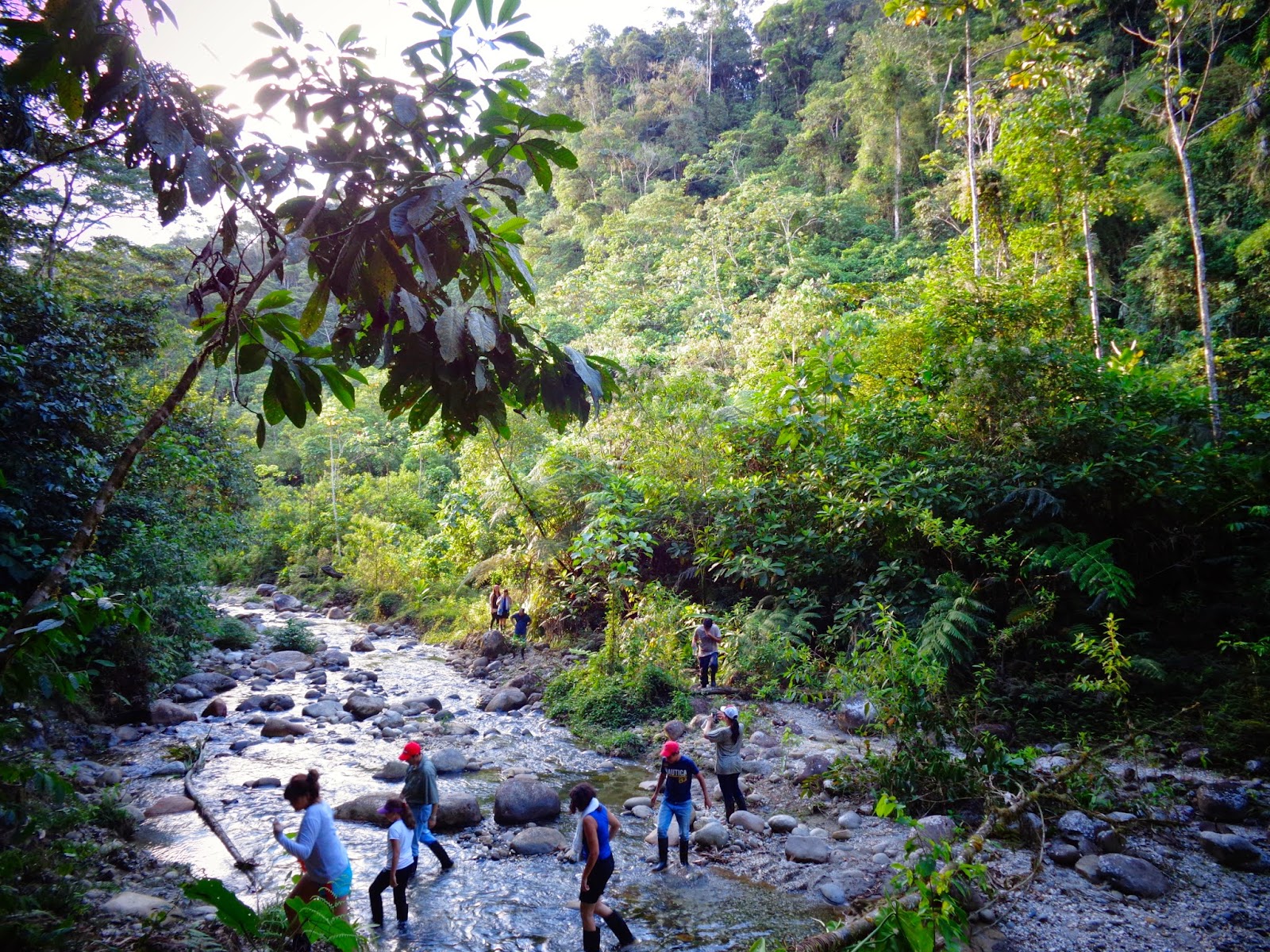 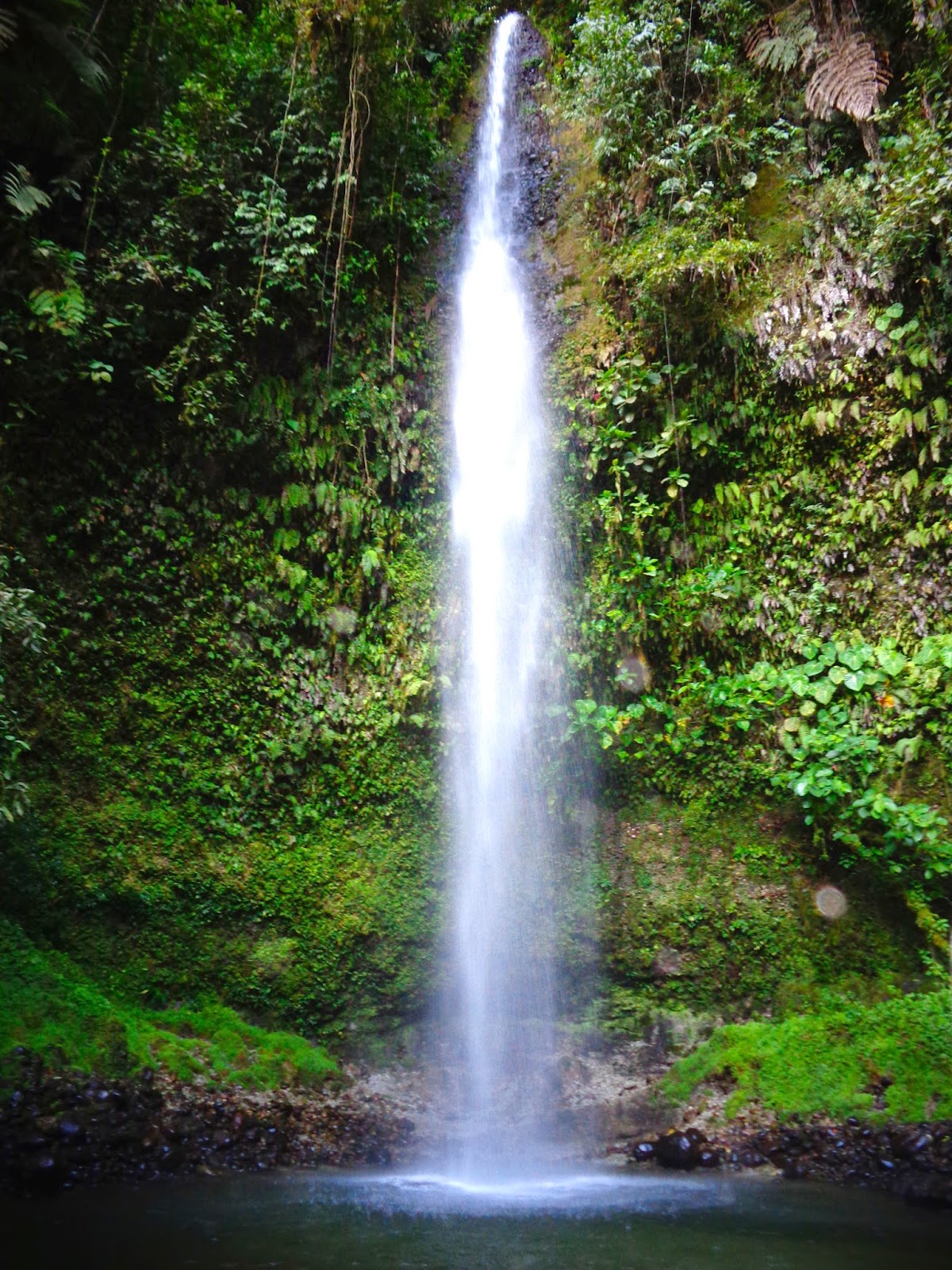 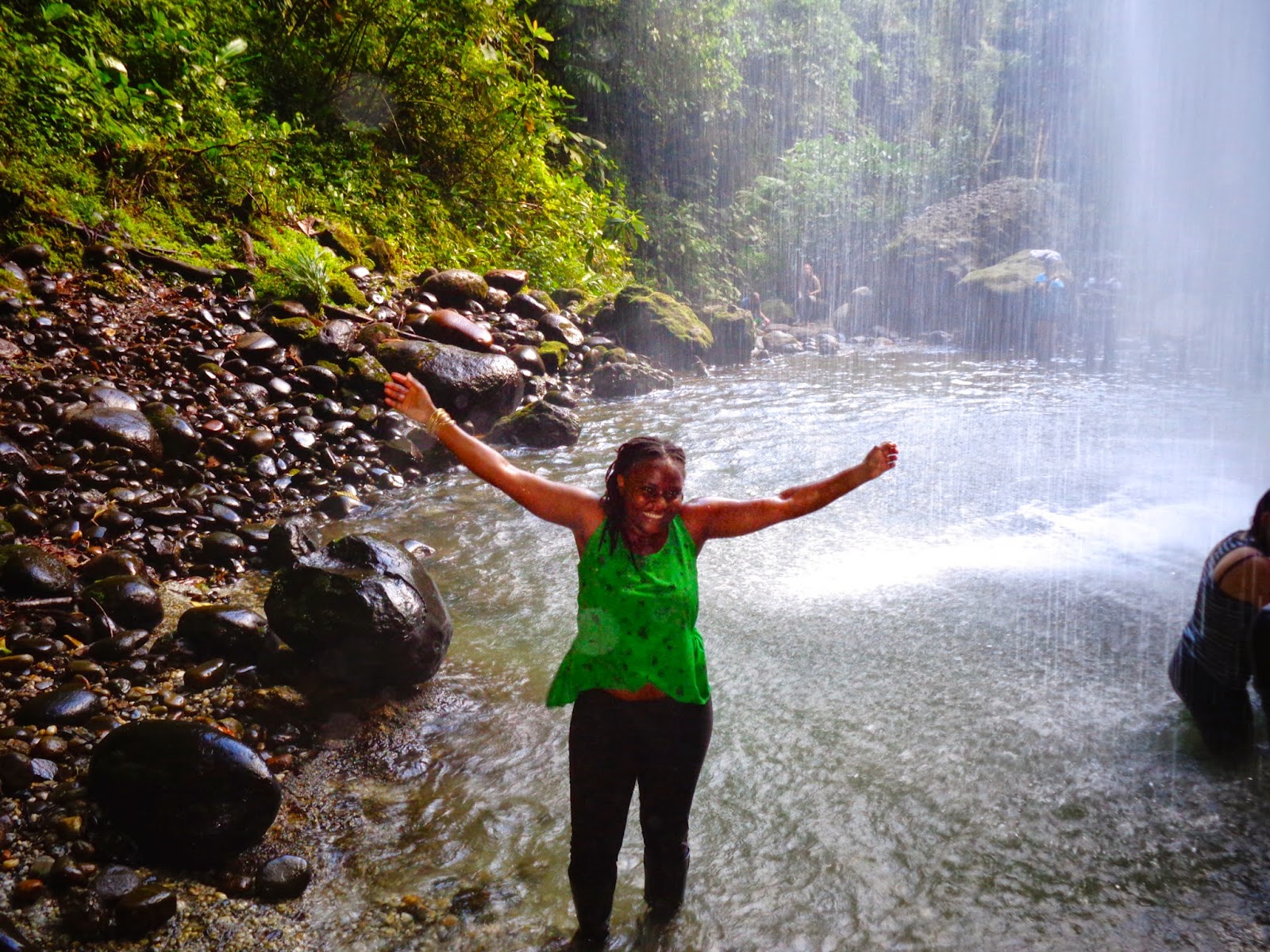 That's it folks, after hanging out at the water fall we trekked back to the where our bus was parked and headed back to the city. I am glad the voice of adventurous J was louder and I got to go on the jungle tour. I had more fun than I expected and I came out of it appreciating nature more as I saw how amazing it is.

There was this Colombian couple in the tour group that had their two kids with them, a boy and a girl. Their daughter who I came to find out is 12 years old was drawn to me because she said I reminded her so much of her favorite teacher. She had also visited Kenya with her family 2 years ago and loved it so she was excited to talk to me about her trip and her teacher. She was so darn cute! she told me about her classes, her best friends in school and I told her about my travels. In the bus she even came and sat next to me so we could continue talking, she was a very smart kid and mature too. Little girls are just too precious!!! now I can hear my biological clock going off.

The owner of the hostel I am staying at is such a sweet old man and always lights up whenever he sees me and is always engaging me in conversation. Today when I got back to the hostel late at night after the jungle tour he almost gave me a hug, he was like, "where were you the whole day? I did not see you and was asking everyone if they saw you." I thought it was so cute!

I think Baños is such a romantic and beautiful city. In the evening to late at night it has been raining a lot, ideal weather for some cuddling.

Whenever I see people using their phones in public I think to myself, "lucky are they who haven't been robbed for they know not the fear of using their phone in public." Hey! I am allowed to be dramatic and yes since the robbery my phone has remained tucked away and not to be seen in public. Paranoia much?

I'm I the only one who finds it funny when I see a balding guy hanging on to a struggling ponytail? there was this guy in our group who's first half of his head was balding while the remaining back half he had a ponytail, it looked very strange and I thought he would look better just shaving everything off.