I am finally in Ecuador after a very long trip by bus. I made it all by myself and I feel so proud that I will go ahead and pat myself on the back....pat! pat! pat! okay so how did I make it all the way to Ecuador from Cali Colombia? here is how I did it......

Starting from Cali I took a 3 hour bus ride that cost the equivalent of $5 to the city of Popayan where I stayed for a couple of days at the lovely HostelTrail. The hostel was really clean, cute and had a nice ambiance but I ended up getting a room facing the main street so the traffic noise in the morning was a killer. Despite the noise I would say it was a nice place to pass through and I would definitely recommend it to anyone.

I left Popayan for the city of Ipiales very early in the morning because I had been informed that buses to Ipiales depart every hour starting from 5:00 am, it's usually advised that this route be taken during the day as at night there have been reported incidences of carjackings. I didn't need to have a pre-booked ticket, I just showed up at the bus terminal and was able to get a ride easily. The bus rides are pretty cheap and you can even negotiate with some companies, I got mine for the equivalent of $15.

The bus ride to Ipiales takes approximately 8 hours and unfortunately some buses will have you wait until they get more passengers before they can depart so always expect some delays. The bus I took was supposed to depart at 6:00 am but we actually ended up leaving the terminal at 6:30 am after it got full. The half hour wait wasn't so bad as I assumed it could have been worse. I slept on and off throughout the trip so that made the long bus ride bearable! plus there was good music playing throughout so that also helped.

I arrived at Ipiales at 3:00 pm and even though I had no pre-booked room, I was able to find one very easily as there were several hotels located around the bus terminal. I stayed at hotel Metropol which was across the street from the bus terminal making it very convenient. The room I got was tiny, cold and there was a damp smell in the bathroom but I decided to suck it up since I was only spending a night before leaving the following day. Having arrived early in Ipiales I decided to make good use of the day so after booking and paying for my room, I took a taxi to the magnificent Las Lajas church which has an interesting history and is quite a site to behold. 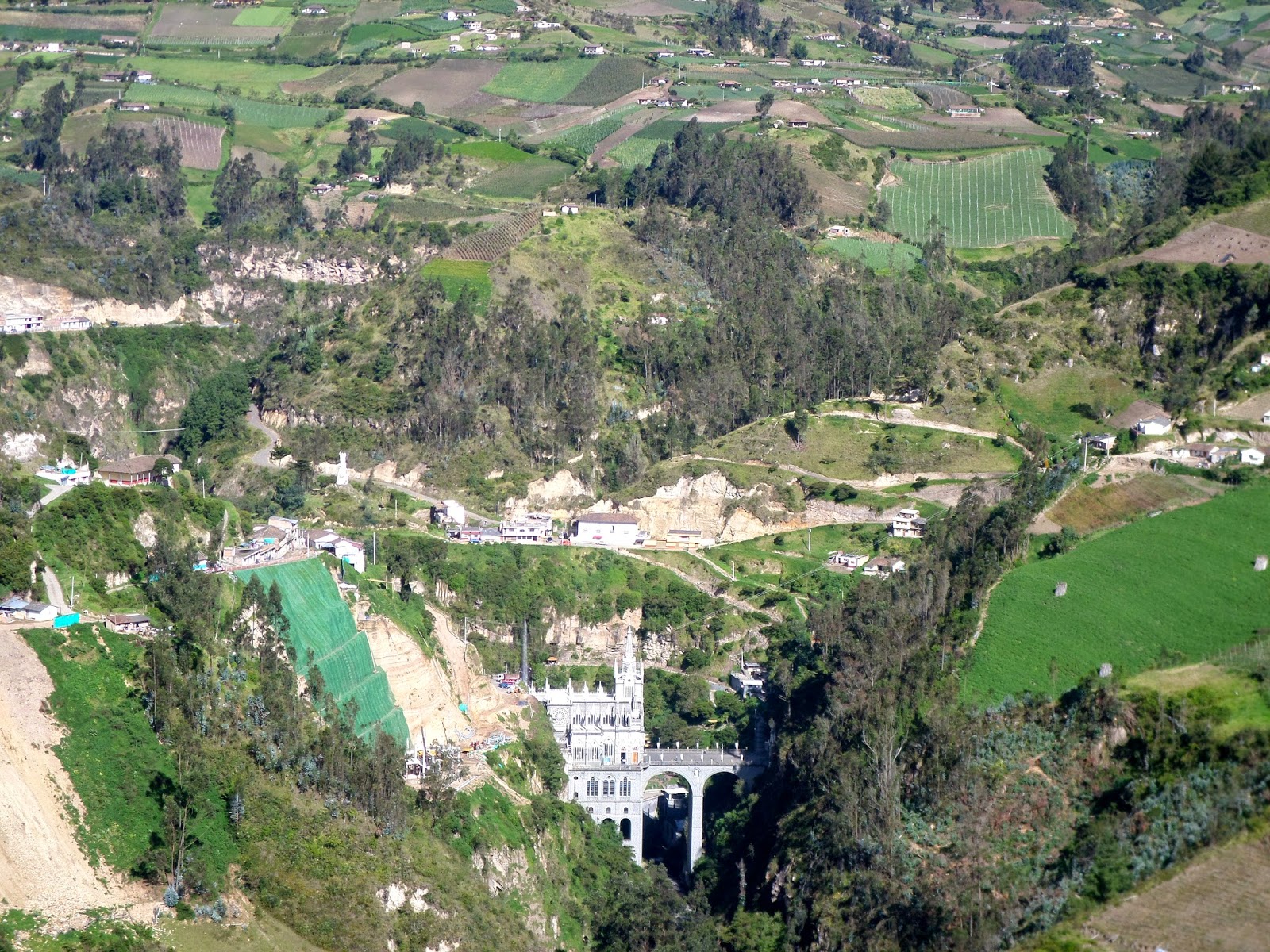 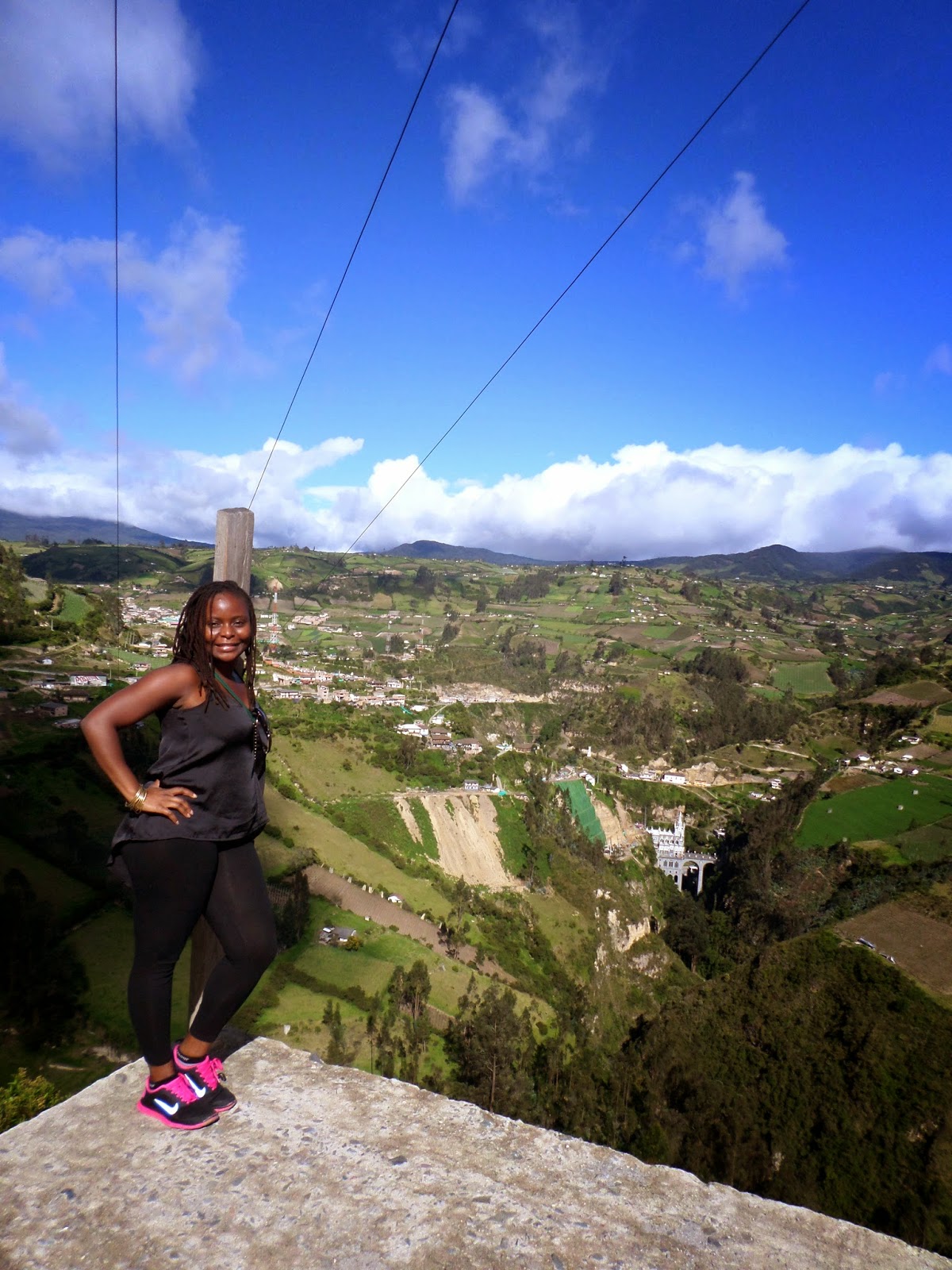 On the way to the church I saw all these plaques on the walls which I later learned were donated by various families as gratitude for miracles performed. The walk to the church was really peaceful and pretty. 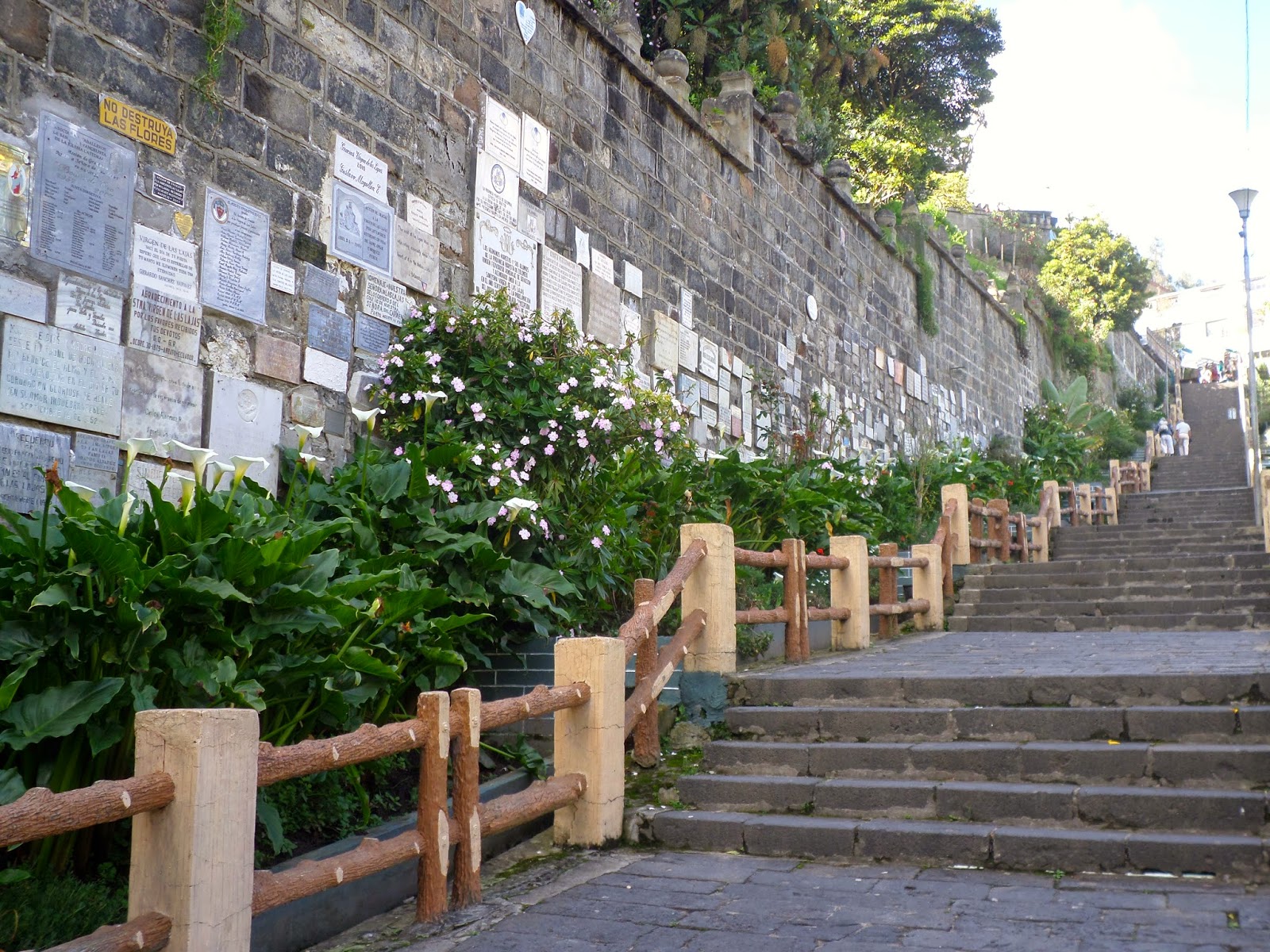 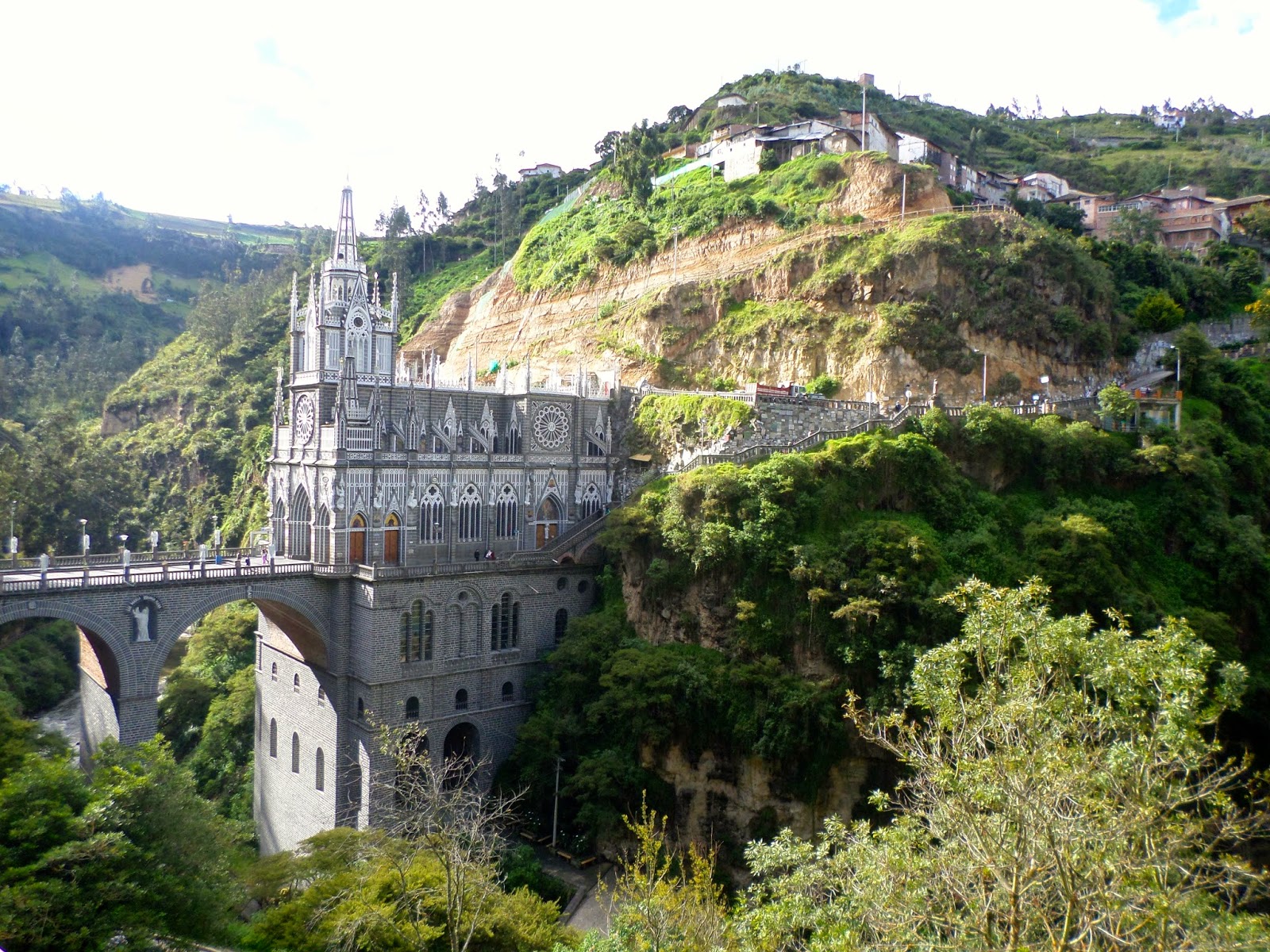 Inside the church it was very pretty but I did not take any pictures because I always feel like it's intrusive taking pictures in places of worship especially when people are inside praying. 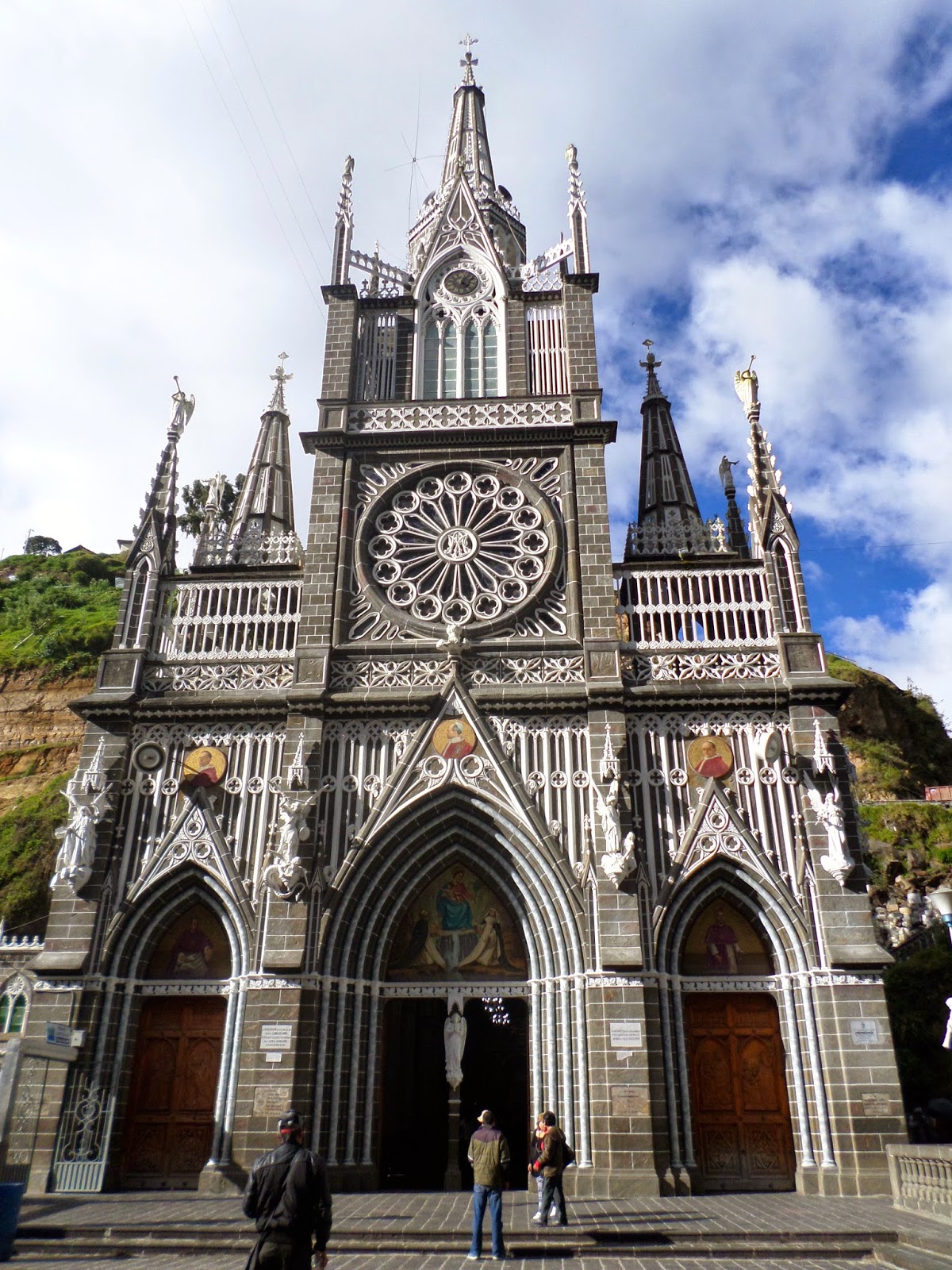 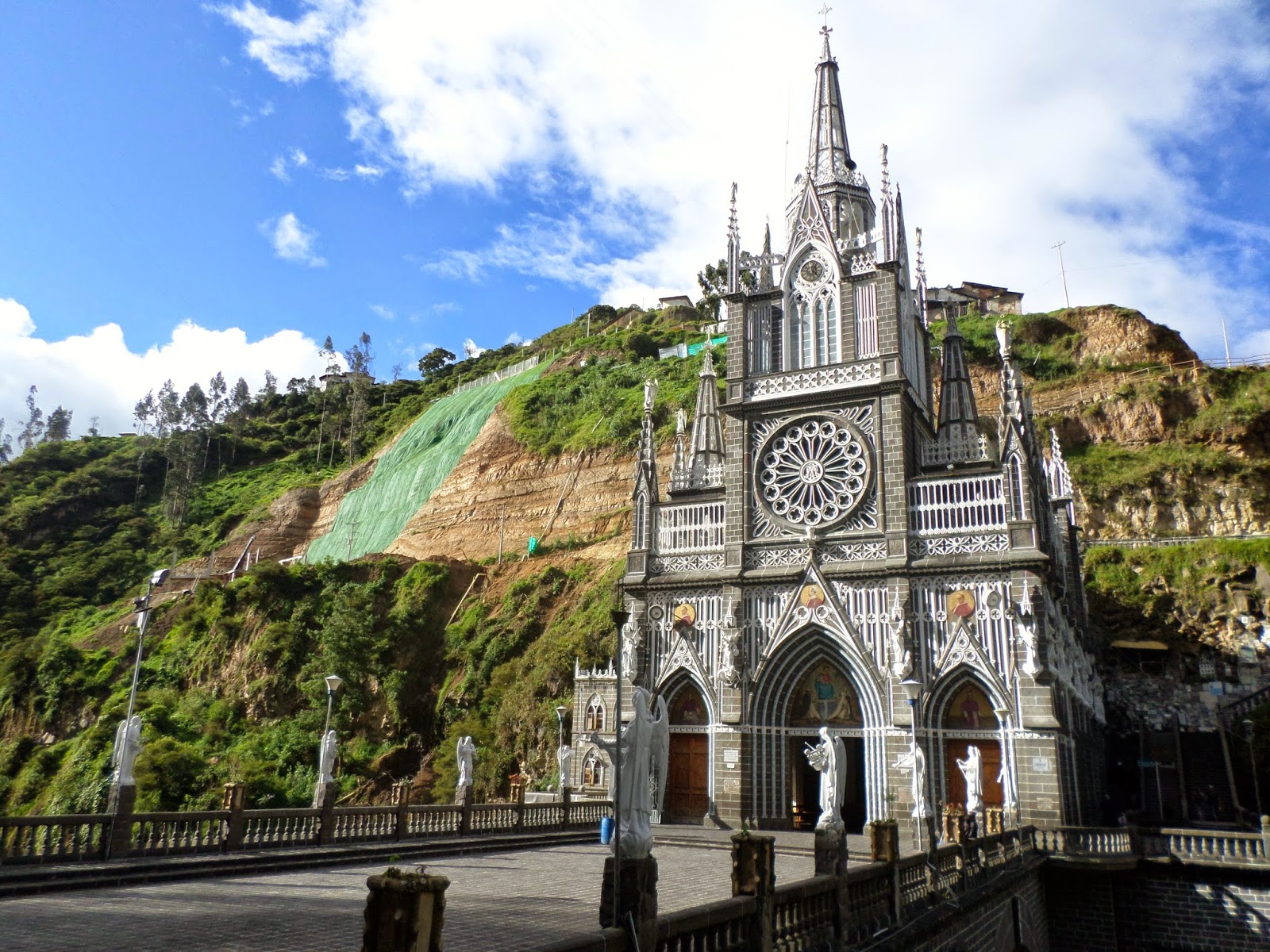 After a night in Ipiales I took a taxi the following day to the Rumichaca bridge which is the principal passage between Colombia and Ecuador. The taxi ride was pretty short and cost about $1 since it was a shared taxi and there were other passengers present. At the border I first went to the Colombian immigration to get an exit stamp before proceeding to the Ecuadorian immigration for an entry stamp. The Colombian immigration took a while confirming the information on my passport and I had to wait for like half an hour, I really don't know what they were checking. The Ecuadorian immigration was faster and I got my passport stamped pretty fast marking my new beginning in Ecuador. 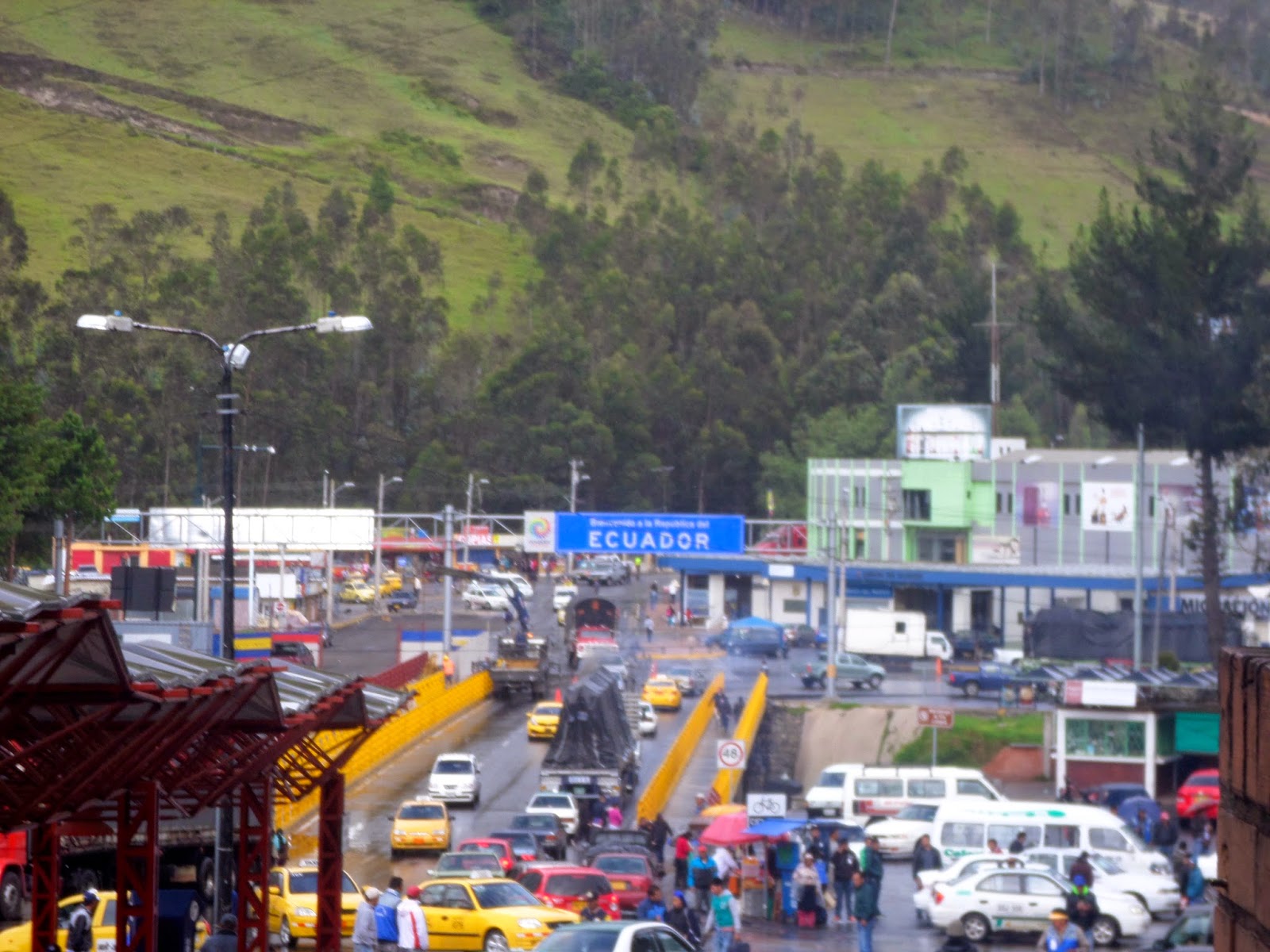 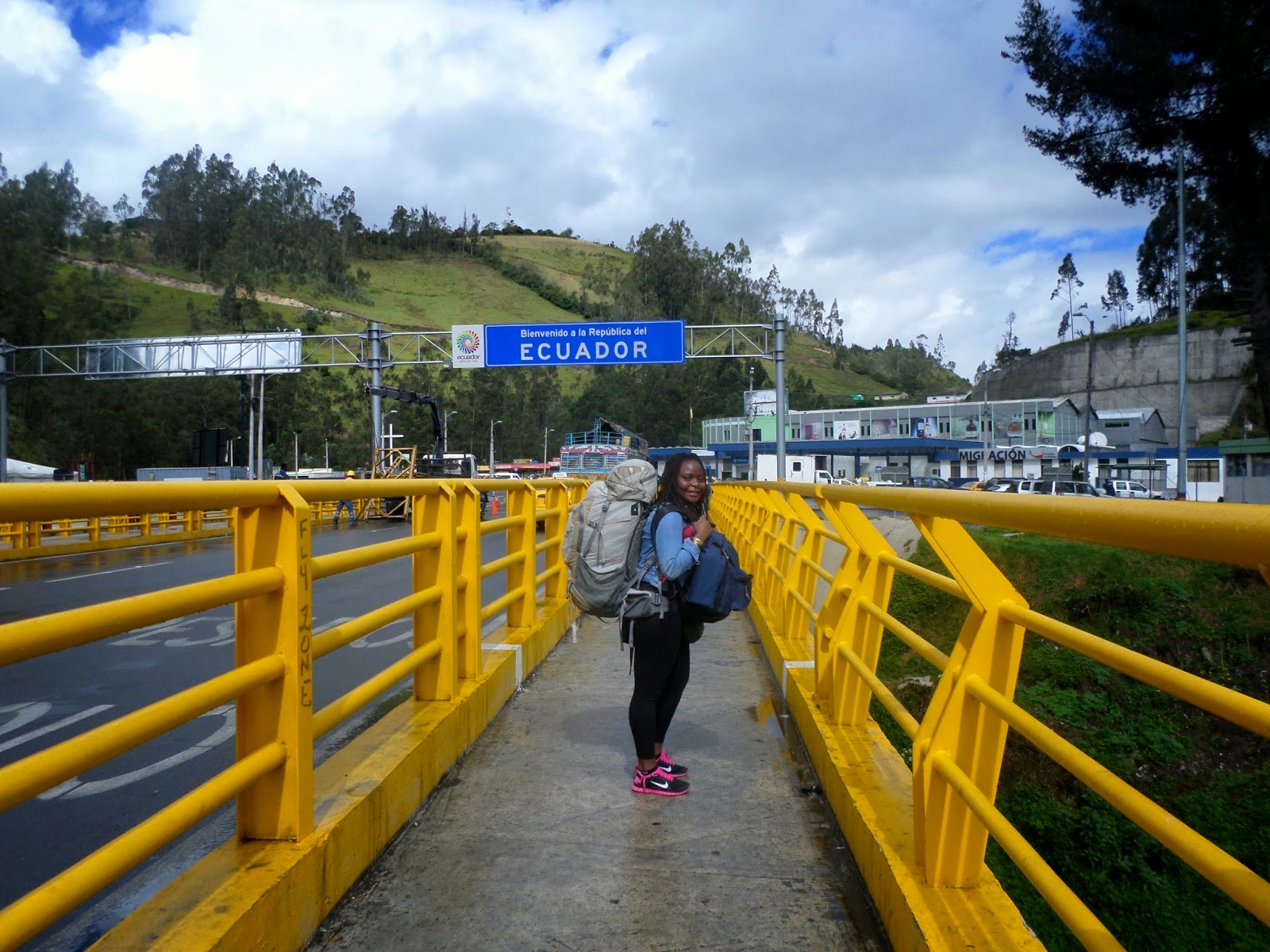 Once I got done with both immigrations I took a taxi to the city of Tulcan where there is a bus terminal that has buses going to different cities within Ecuador. The taxi ride was short and I would say it took maybe ten minutes if not less. I managed to get a bus that was passing by Otavalo where I was planning to stay for a couple of days before heading to Quito the capital city of Ecuador and my soon to be new home. The drive to Otavalo took about 2 and a half hours and cost $3, I slept through most of it.

Once I was dropped off at Otavalo I got a taxi to my hostel and finally concluded my long trip, Phew!

I am staying at the lovely Hostal Chasqui in my cute little private room that has it's own TV and DVD player if I need entertainment. I also get to enjoy a hot shower, bliss! 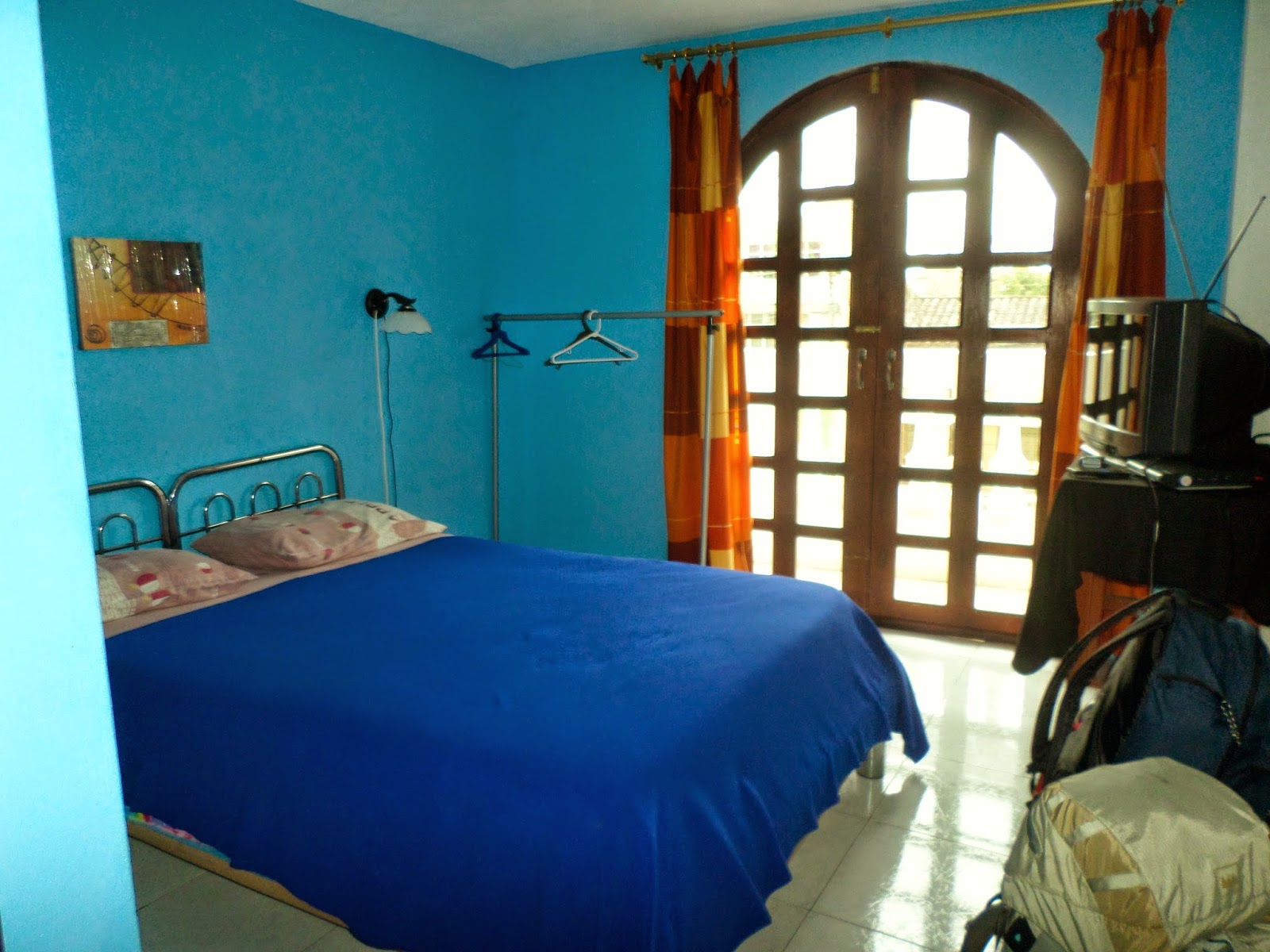 That's it folks! here is to new beginnings and new adventures.

My long bus ride from Popayan to Ipiales made me realize how beautiful Colombia is. We passed through amazing landscape that looked too perfect to be real, imagine miles of lush rolling hills. I can not even begin to describe the landscape, it was too beautiful for words.

I think all that food in Colombia did a number on my butt. I saw one of my photos that had been taken from the back and I could not believe it, my butt got bigger! like I need any more cushion back there. I suppose I should quit eating this jumbo chocolate bar right now, right?

At the border of Colombia there were many men offering money exchange but I never trust anyone off the street to change money for me because you never know if you are going to get fake money or not. Good thing I had my stash of dollars that I had kept as back up.

Ecuador uses American dollars so that makes it convenient for me, so far I am getting blown away by how cheap stuff is over here. I just grabbed lunch for $1.25 and it was a decent lunch at that.

In the bus from Tulcan to Otavalo there was a police stop and everyone had to show their ID. When I took out my passport the policeman proceeded to ask me to step out of the bus so he could check my bags, really? it was raining to make matters worse and the guy looked really shady so you best believe I was watching his every move because I just didn't trust him handling my stuff. I have to say I felt embarrassed stepping out of the bus and having everyone look at me like I had committed a crime.

In the bus I sat next to this old man who became too chatty with me and insisted on shaking my hand when he said hi to me. I had my guard up but I decided to give him the benefit of doubt thinking maybe he was just being friendly.........wrong! dude started asking if I have an Ecuadorian phone number and I could see where the conversation was going so I proceeded to yawn and close my eyes to feign sleep. Who cares if it was a lame move on my part but it worked. The guy was old enough to be my grand father! Ooh! and by the way I did actually end up falling asleep.

Speaking of old men, at the bus terminal in Popayan I was struggling with my backpack when this older dude came to my aide. He was really sweet and carried my bag until I was ready to take the bus. I thanked him profusely and when he shook my hand while saying goodbye I slipped him some money just to show my gratitude. The guy looked at the money in shock like I had insulted him, I felt so embarrassed so I explained it was to show my gratitude. He shook his shoulder like he meant to say I didn't have to before walking away. I think I had unknowingly insulted him.