Coyoacán is another one of the boroughs in Mexico city that I wanted to visit so I could check out the house now turned museum of Mexico's famous artist, Frida Kahlo. I can't tell you that I know a lot about art nor the works of famous past or present artists because that would be a lie. Honestly I had never even heard of Frida Kahlo until I watched the autobiographical movie based on her life.

The movie came out in 2002 and Salma Hayek played Frida's character.  I really enjoyed the movie which piqued my curiosity about the artist so I ended up reading more about her life, it was fascinating but at the same time really sad. Anyway, look her up if you can.

Ana told me that she knew where the house is plus she added that Coyoacán is a really cool area to check out with it's artsy vibe, good food and a good artisan market where you could find some really good items. I was very excited to check this borough out so that's exactly what we did. Turned out we had picked out the best day to visit Coyoacán because there was a jazz festival taking place so we were able to enjoy some good music as well. There were lots of people around and the atmosphere was very festive. We walked around as Ana pointed out the various local delicacies, I swear every block had vendors selling all kinds of food which all looked delicious that it was hard not getting a taste of some of it..........my poor waistline.

We had arrived in Coyoacán in the evening so unfortunately we did not have enough time to really enjoy the borough and spend more time there. I took very few pictures because I was busy enjoying my surroundings. When we finally remembered the reason why we had come to the borough in the first place, it was a bit late and Frida Kahlo's house/museum had been closed. We figured we could return the following day anyway so it was no big deal. 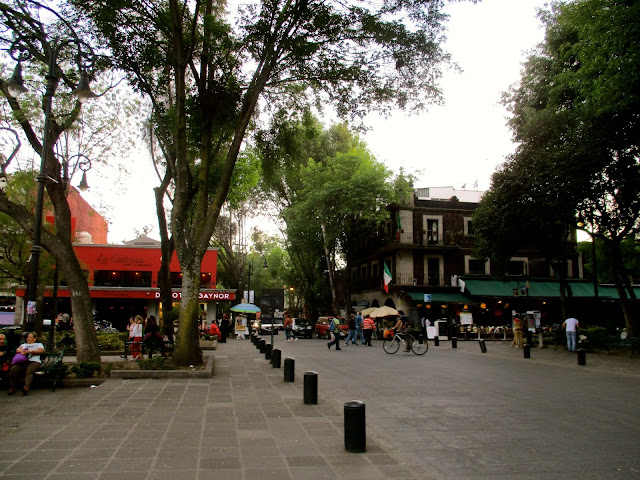 You see the little carts alongside the building in the picture below? they were all over the place and I got to sample some really tasty treats. 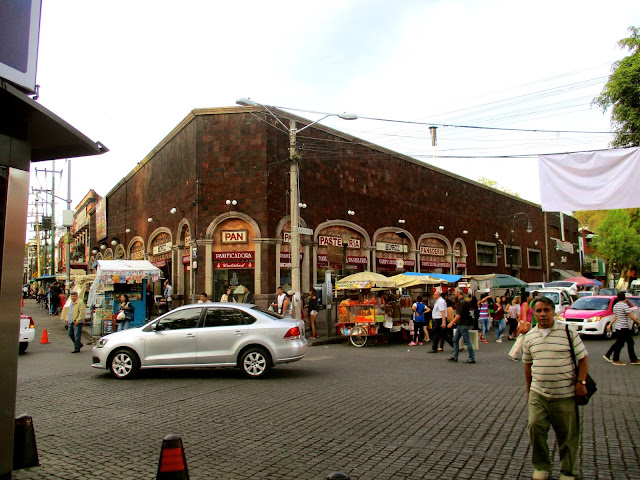 The following day we headed back to Coyoacán and this time we decided we would just focus on our goal of visiting Frida's house, Ana's mum even accompanied us.

There were several signs indicating where the house is so you could not miss it. 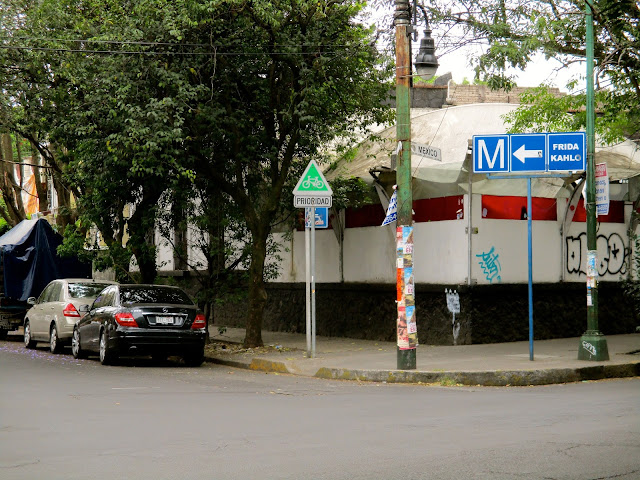 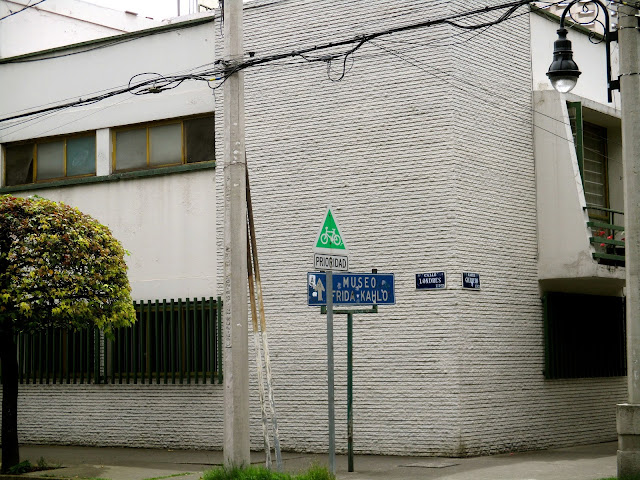 Totally unrelated but I just love brightly colored houses which are plentiful here in Mexico city. Below is an example of such houses. 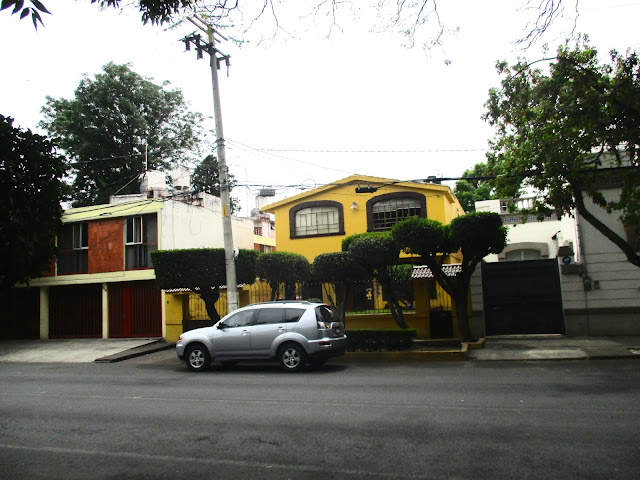 We finally got to Frida's house and the first thing we spotted were these huge tourist buses that had brought in several tour groups. Then we spotted the very long line of people waiting for their turn to get in the house. The estimated wait time as we found out was about 3 hours! we had other plans so we couldn't afford the wait and just like that, I never got to get inside the house which I have heard is well worth checking out and you can see some of Frida's work on display.

PS: The house is very large and covers a whole block, you can not miss the big blue house for sure. I really would have loved to see the inside. 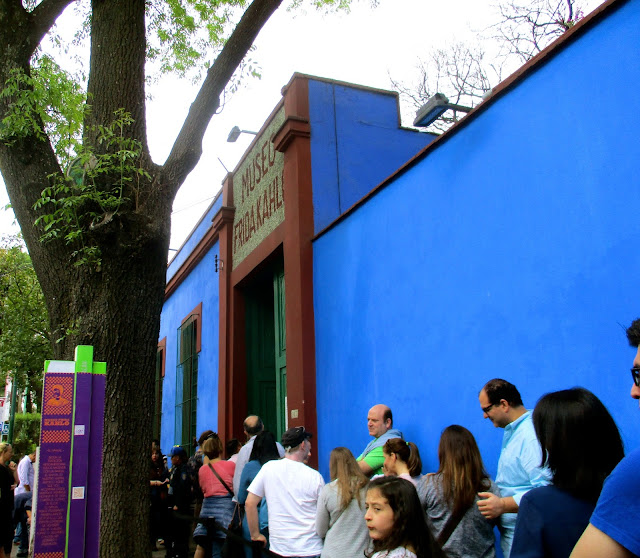 I took one last picture before I resigned myself to the fact that I wasn't going to be getting inside.......... 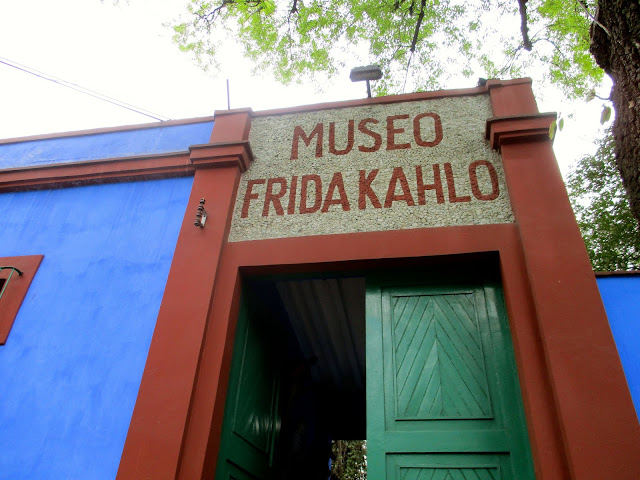 That's it folks, we left shortly after and Ana felt so bad that I had missed the opportunity to see what I had come to see but I assured her that it was fine, the house/museum is not going anywhere so there will always be a another chance to check it out.

I was chatting with this taxi driver who told me that Mexico city is so huge that no one can really know their way around it all no matter how many years they have been driving. He has been driving a taxi for 10 years and he said that there are still parts of the city that he doesn't know and sometimes relies on a GPS to help him out.

Remember I mentioned in a previous post that I had an upset stomach? yeah, it actually didn't go away on it's own as I thought it would. I had to go to the doctor and I was prescribed antibiotics, I am still recovering, thank goodness the painful stomach cramps I was experiencing have ceased.

I love the artisan markets here, they are so colorful and full of really amazing things that I often get overwhelmed by the choices and end up not buying anything........good for my pockets though.

I have had the best yogurt here and have been indulging without restraint. I think this holiday has largely been all about food.
- March 23, 2016