Xochimilco pronounced (so-chee-milko) is one of the boroughs within Mexico city and is best known for it's canals and very colorful boats that navigate through the canals. Xochimilco was a vast wetland that proved challenging to the early settlers, these settlers were there pre the Spanish and since they practiced farming you can only imagine how difficult it must have been growing their crops. They however were able to work around this by inventing a system of agriculture whereby they grew crops on cane structures or rafts anchored on trees along the shores, they filled these structures with mud and soil and kept doing it until some areas of the lake were reduced. Basically they grew floating gardens that swallowed up parts of the wetlands making the area viable for agriculture. Hope my explanation makes sense.

On Saturday we (Ana, her mum, her daughter and I) decided to make a day trip to Xochimilco and I was excited to check it out. The area is a bit far from the city but we took a taxi which cut the trip in half, thankfully! When we got there I was taken aback by the bright colorful boats that were floating all over. I had seen photos online and I thought they looked so pretty but seeing them live was even better, what can I say? I love color! we rented a boat for an hour and one of the canal navigators accompanied us as he was the one manning the boat.

The boat ride was very calm and and some areas of the lake made for a very romantic background. Ana was telling me that people usually rent the boats and throw parties on them, there were plenty of mariachi bands floating around in their boats and if you wanted them to sing for you then their boats would be navigated to float alongside yours and they would sing to your hearts content.........of course at a price. There were also vendors selling food and souveniors and just as like with the mariachis, you would summon them and they would float their boats alongside yours to sell you whatever you wanted. Really, there were so many activities taking place on those canals and it was interesting people watching and listening to all the mariachi bands belting out their tunes. Here are some of the pictures I took, unfortunately the weather was a bit overcast but in those rare moments when the sun peaked through the cloud I was able to get decent shots.

The boats may look small but they actually seat quite a good number of people. 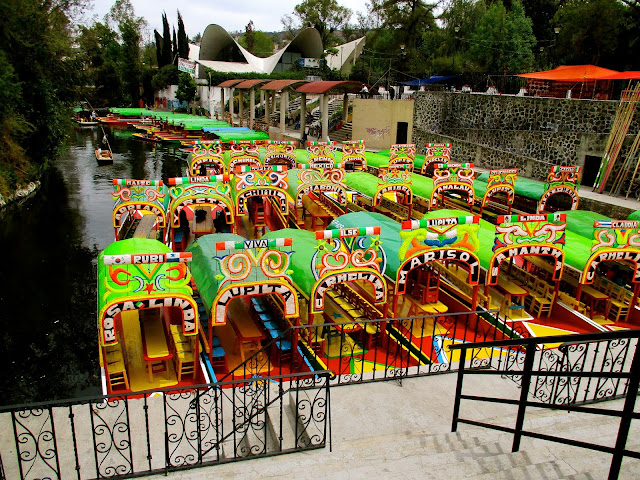 With Ana and her very sweet daughter 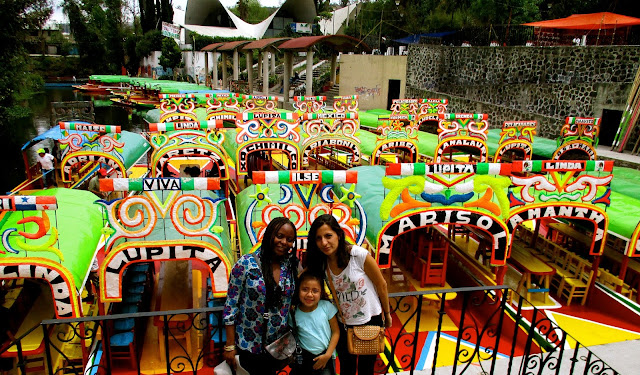 With Ana's mum and daughter 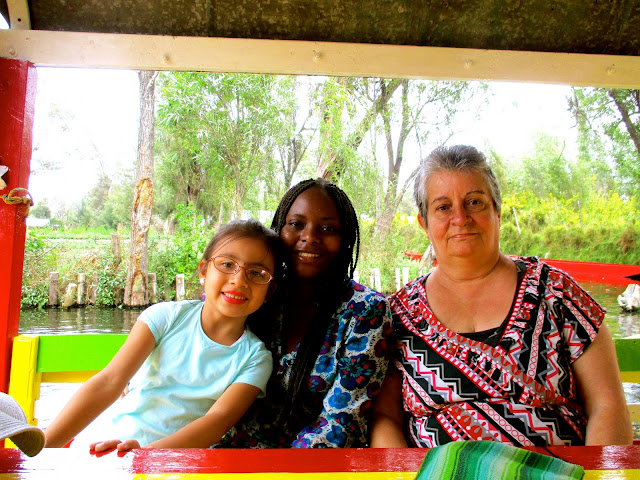 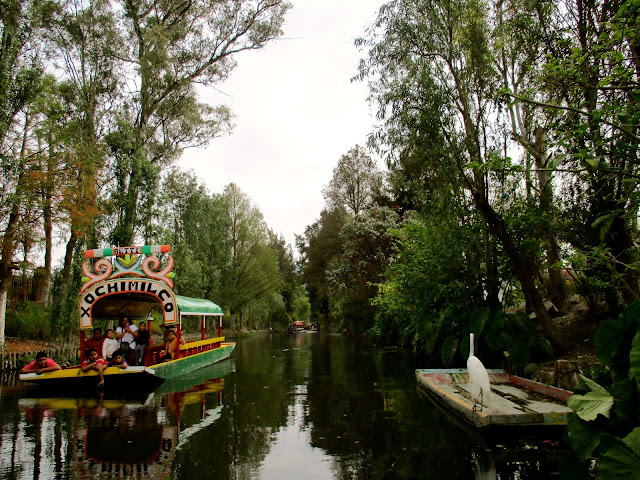 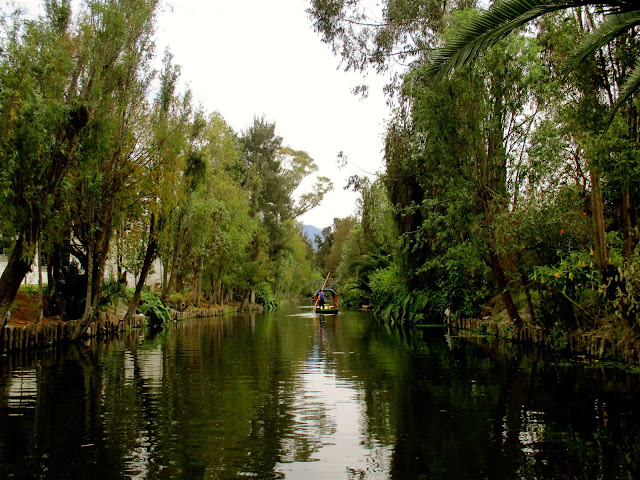 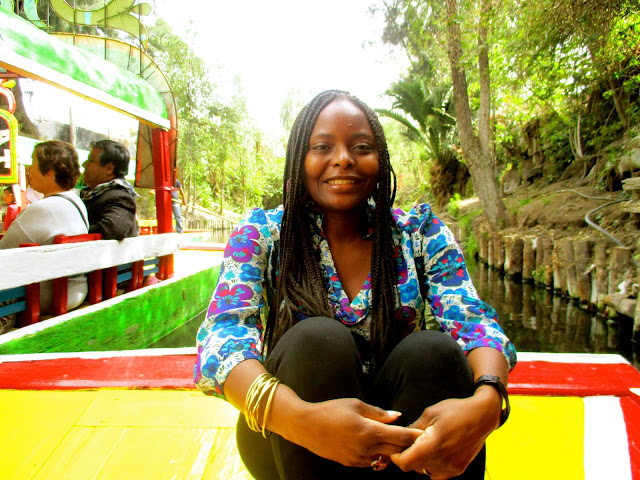 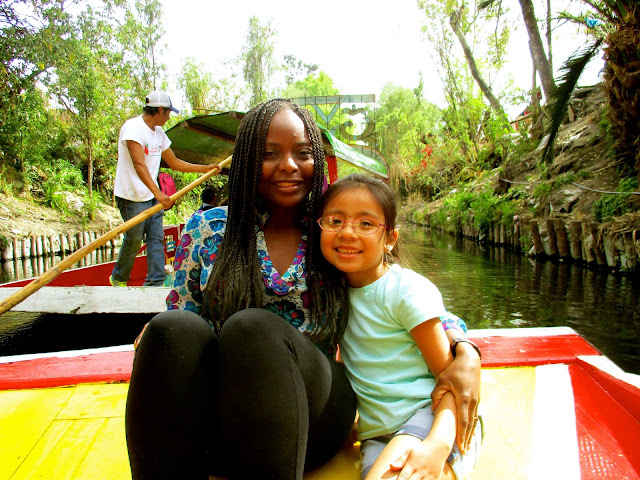 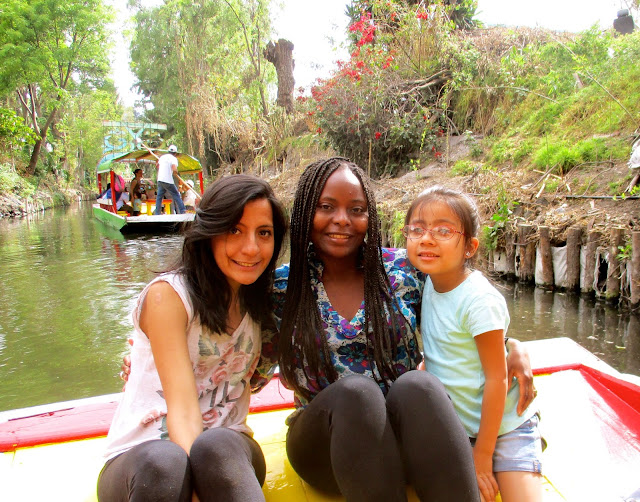 Each boat had a name and Ana was telling me for a fee I could also get my name painted on one of the boats. 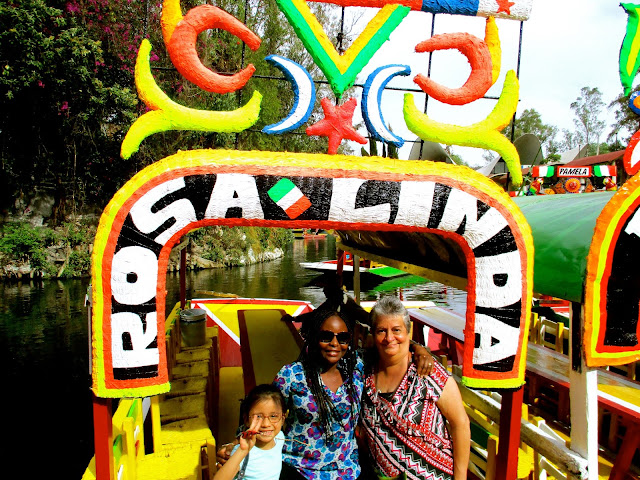 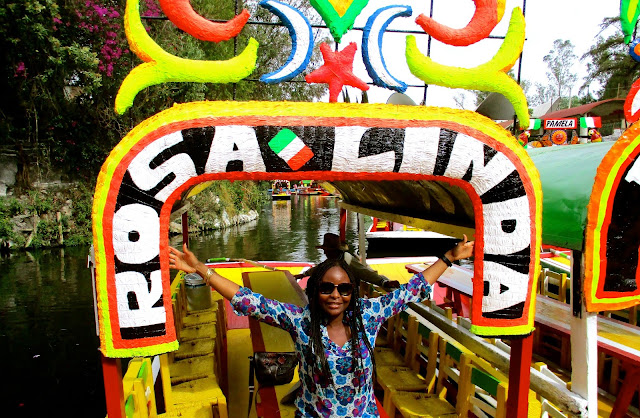 After the boat ride we went to get some lunch at one of the many food stands around. There was a celebration going on so there were lots of fireworks, music and people. Did I mention I love Mexican food? love it! below is a green taco with beef. 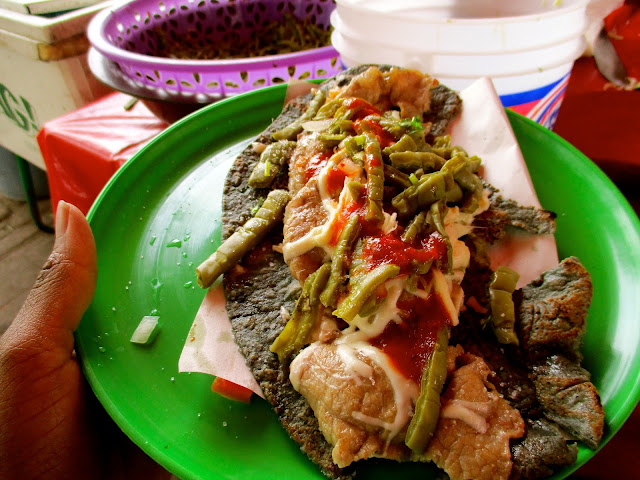 Loved the taco so much that I got a second one............le sigh! and to think I was once a vegetation, how the tables have turned. 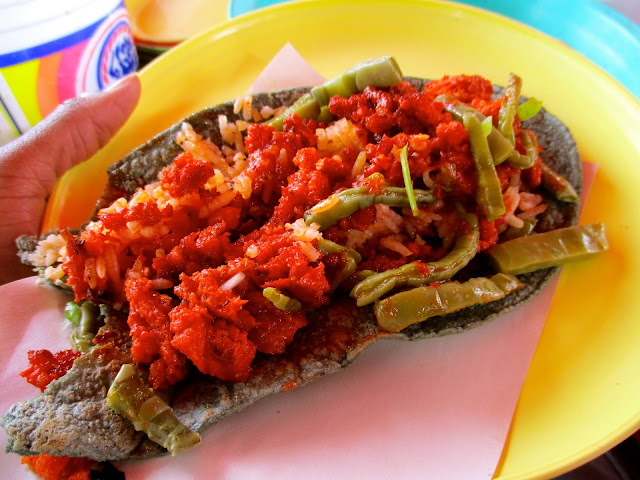 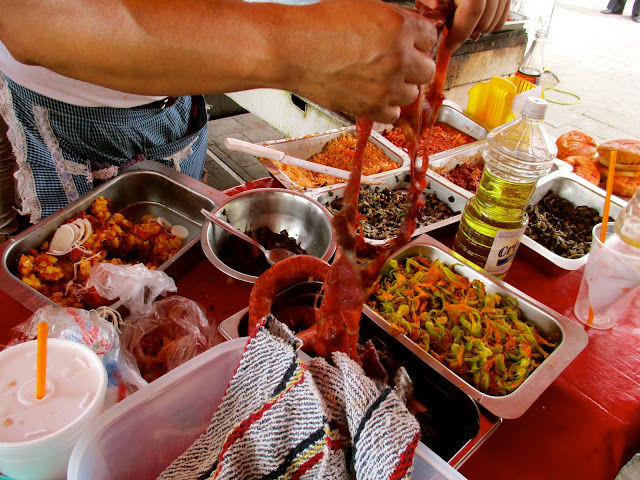 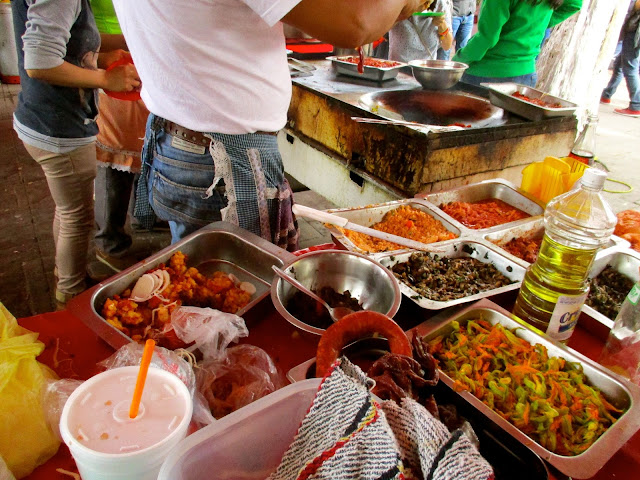 Lot's of sweet goodies after the delicious lunch 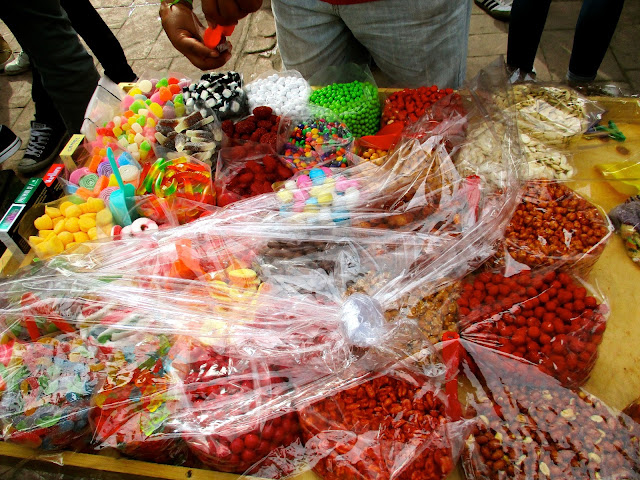 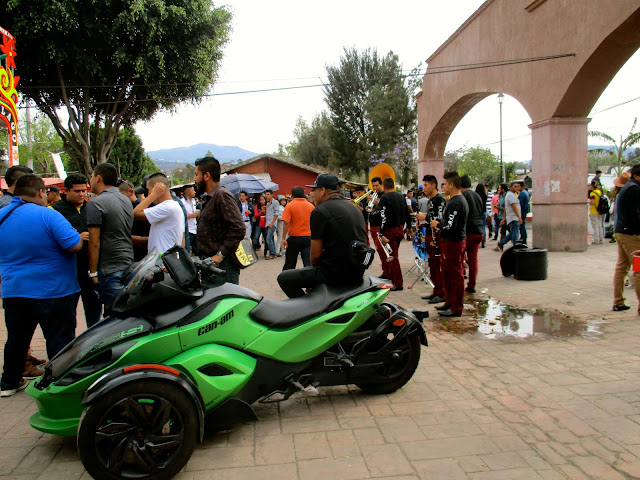 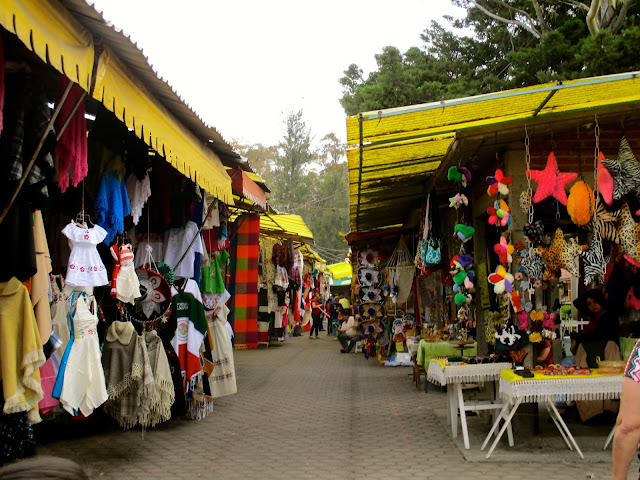 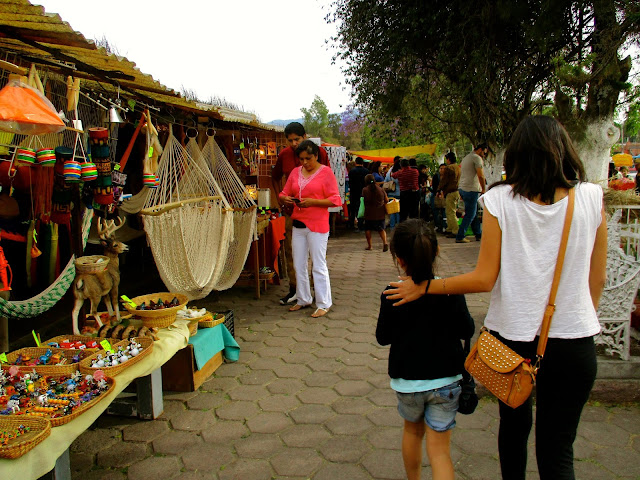 I spotted several shrines around, they were so colorful. Too bad the overcast weather didn't bring out the colors to their brightest but at least you get the idea of how colorful everything was. 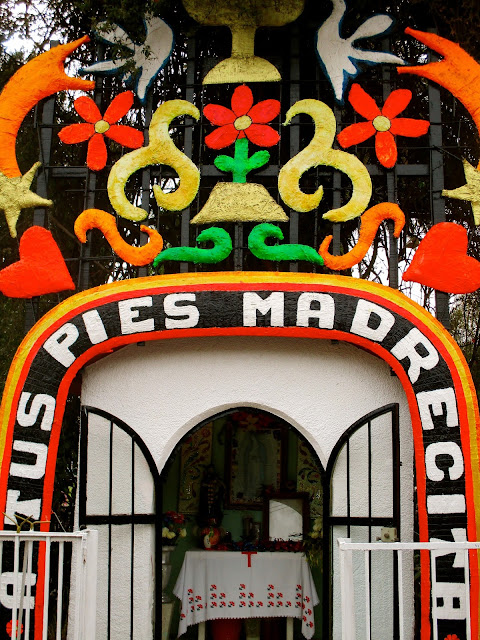 That's it folks, after lunch we walked around for a bit before heading back to the city. We took a taxi which was once again very convenient and didn't even take long to get us back to the house. I really enjoyed my trip to Xochimilco and would recommend it to anyone visiting Mexico city.

Parts of the canals in Xochimil are pretty but then there are other parts which have been littered with garbage spoiling the appeal of the canals.

I have been eating everything under the sun and I think I may have gone too far because right now I am suffering from an upset stomach that's really painful. I am taking something to help with the pain and discomfort so slowly by slowly I am feeling better.

I have been approached several times by people wanting to take photos with me. Most of the time I have said yes because they have approached me in a very polite manner.

There are these sweet dried mangos and pineapples dipped in chilli that I have come across being sold on the streets, I feel sorry for my stomach for how much I have indulged in them. They are so good!