Part 3 of my Island adventures, if you need to catch up you can check out Part 1 and Part 2. After leaving Amantani Island we headed to the third and last Island of the tour, Taquile Island. Getting there took about 2 to 3 hours but the boat ride was pleasant so that helped a lot plus most people passed out anyway since it was early in the morning.

Once the boat docked our guide explained to us the agenda for the day and off we went ahead to climb numerous steps in order to get to the main plaza of the Island. Going up was tough as usual but the steps were so well planned which made things slightly easier, I can only imagine the hard work it must have taken to build all those steps though.

The main town plaza wasn't something to write home about but it had some beautiful views of the lake and surrounding areas. There were several artisan shops where you could buy some of the handmade products from the Island and most of these products were being woven by men. Apparently these products can only be found on the Island and nowhere else plus the Islanders are known as the best weavers in the world. Luckily for my bank account I did not see anything that caught my fancy so I never spent any money. 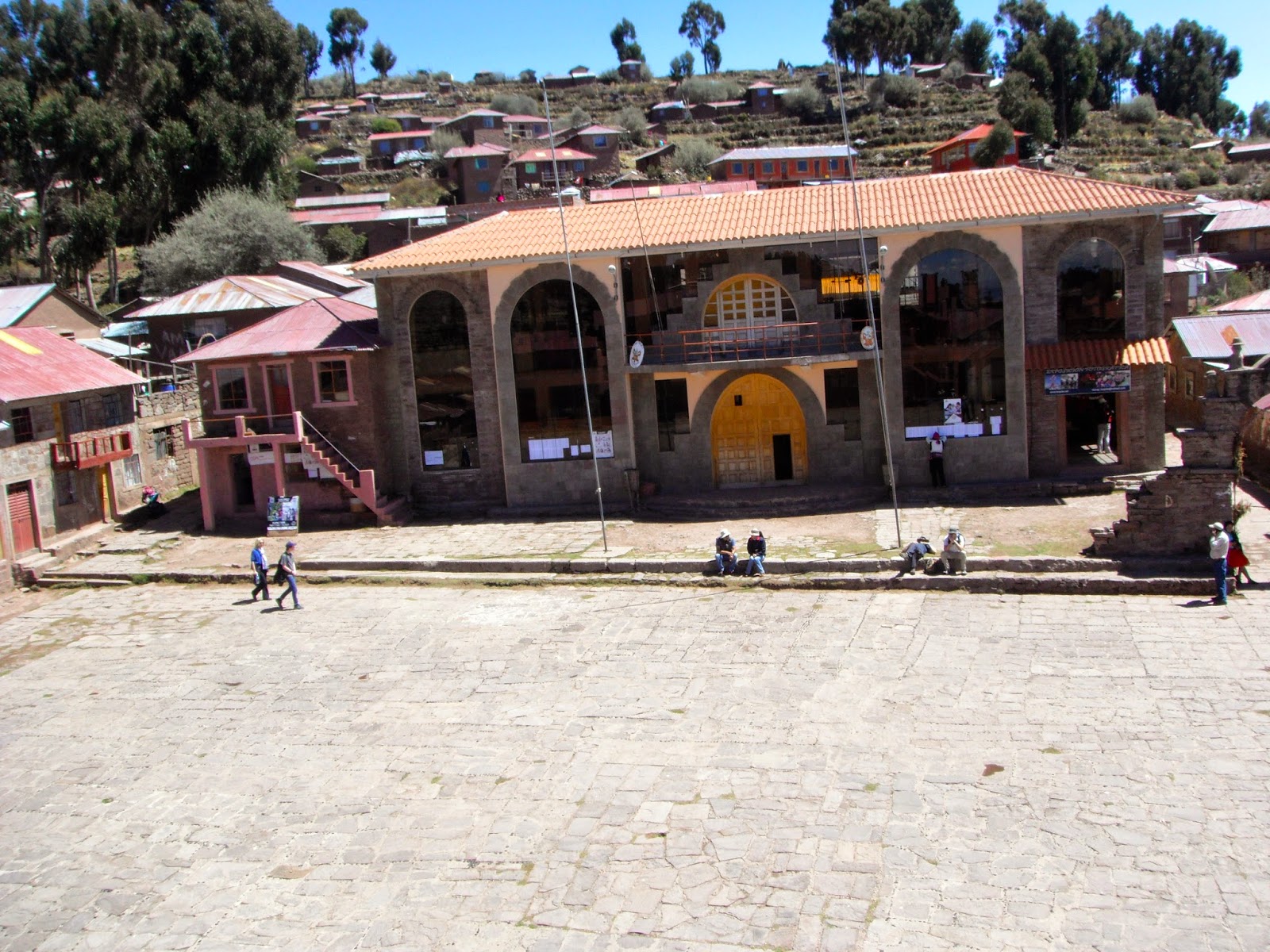 Posing with one of the Islanders wearing the traditional clothing. 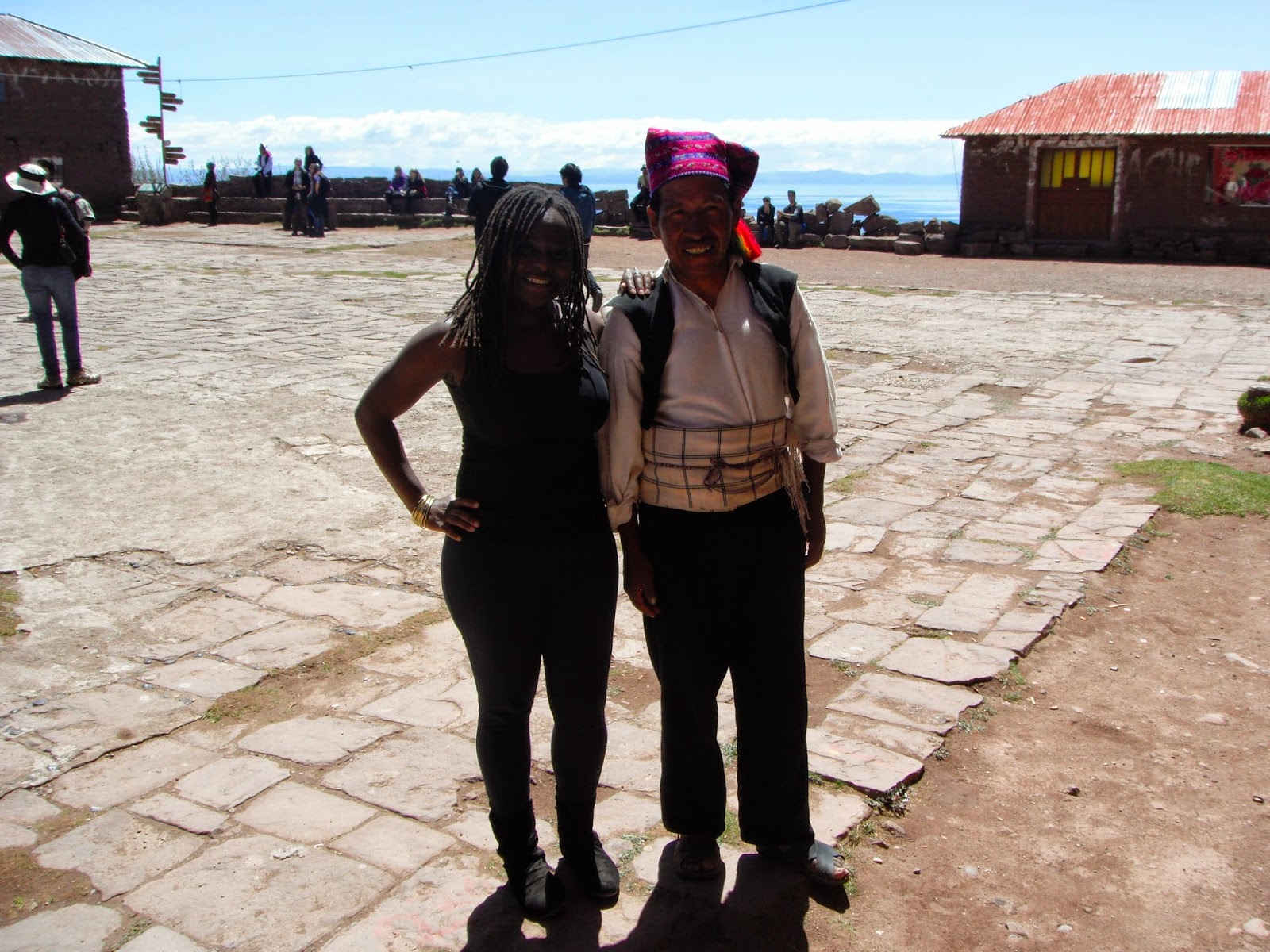 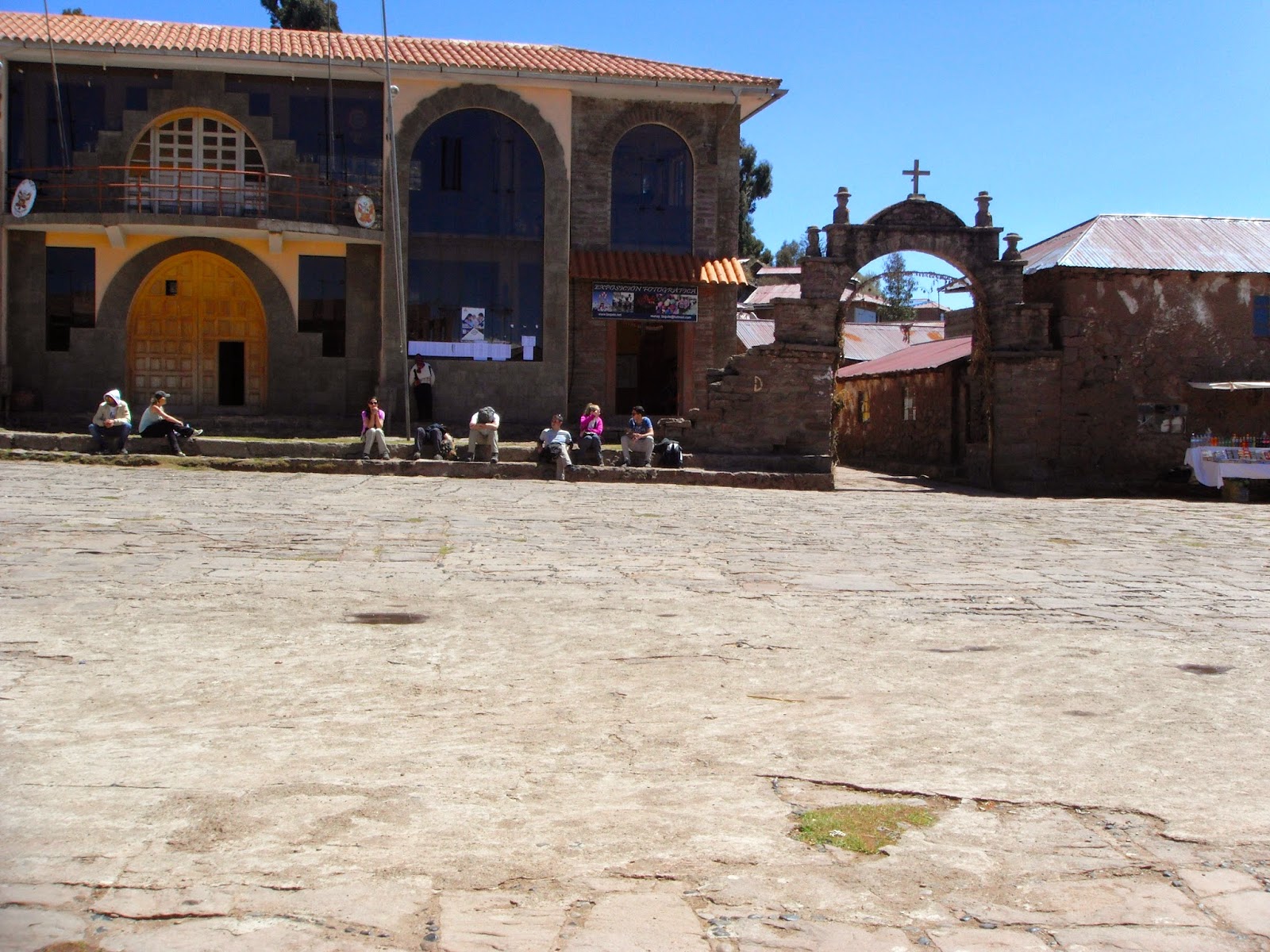 There wasn't much to do at the plaza but we were given half an hour to chill before heading off to lunch and to learn about the traditions of the Islanders. Taquile Island actually reminded me of Amantani Island because of the numerous terraced hills and mountains so it was hard to determine which of the two was my favorite. 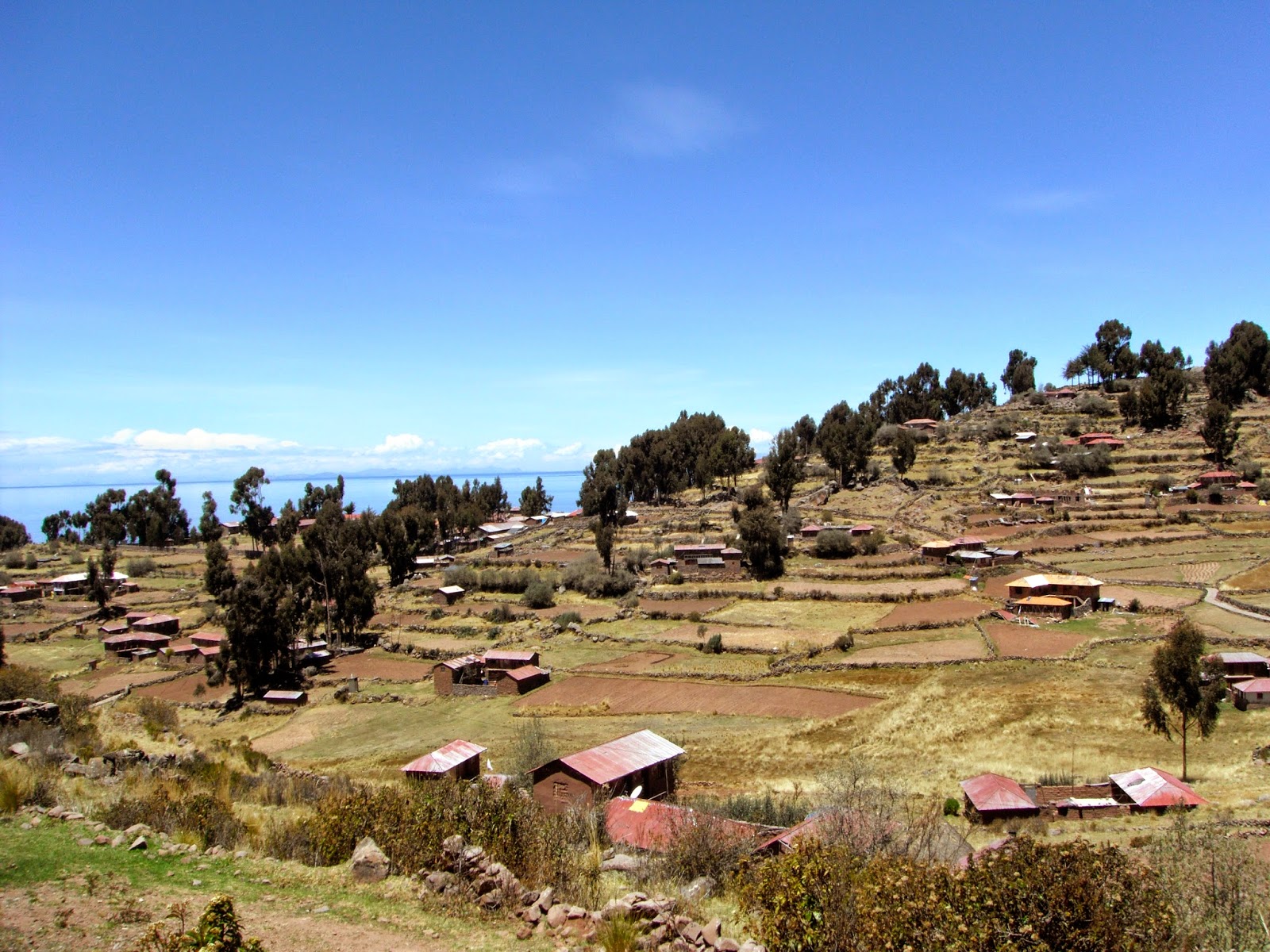 Once we assembled for lunch the guide went ahead to first describe the clothing of the Islanders and the culture they practice. You see the man below? the hat and the belt indicate that he is married. Married women wear dark skirts while single women wear brightly colored skirts, in general it seems like single women wear more elaborate dressing while married women wear more toned down dressing. For the men, their wives present them with the belt after their first year anniversary of marriage and attached to the belt is a piece of the wife's hair to signify an eternal bond meaning their marriage is meant to last forever.  Divorces do not exist on the Island. 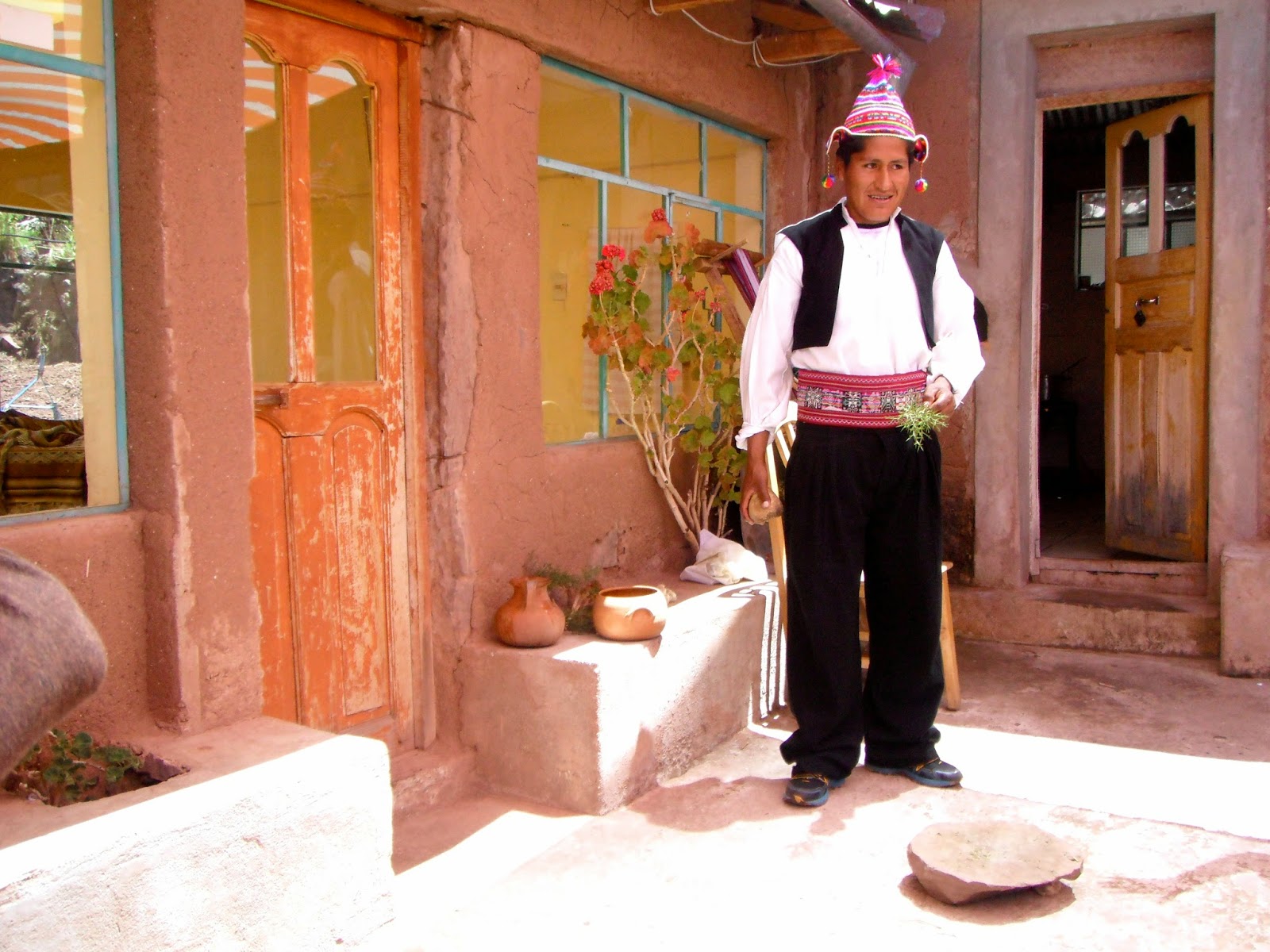 We were also shown how the Islanders use natural resources for everyday use which was very interesting. They make their own shampoo and soap from specific plants, below you can see the guy demonstrating how this is done. After grinding the plant with a stone he put it on a piece of cloth then dipped it in water, within minutes the water turned into foam and it was ready to be used for cleaning. We got to smell and touch the foamy water, it had a leafy smell and indeed had a soapy feel to it. The guy even took a dirty piece of clothe to demonstrate how effective the soap is and sure enough, the clothe came out clean after being washed in the soapy water. 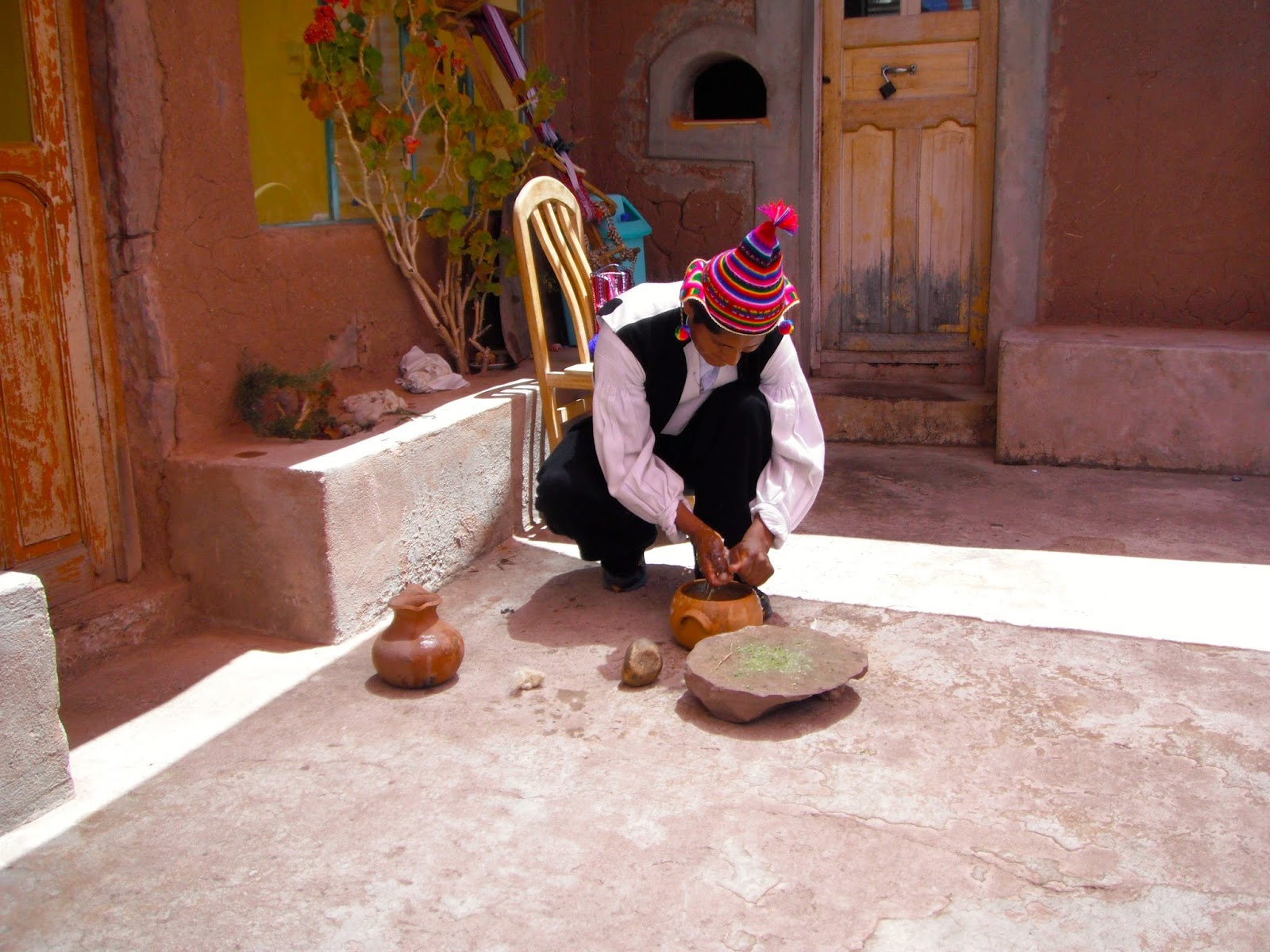 After the interesting information we were given, lunch was served over a balcony overlooking the landscape of the Island, it was really pretty! but the sun was super bright and came down hard. 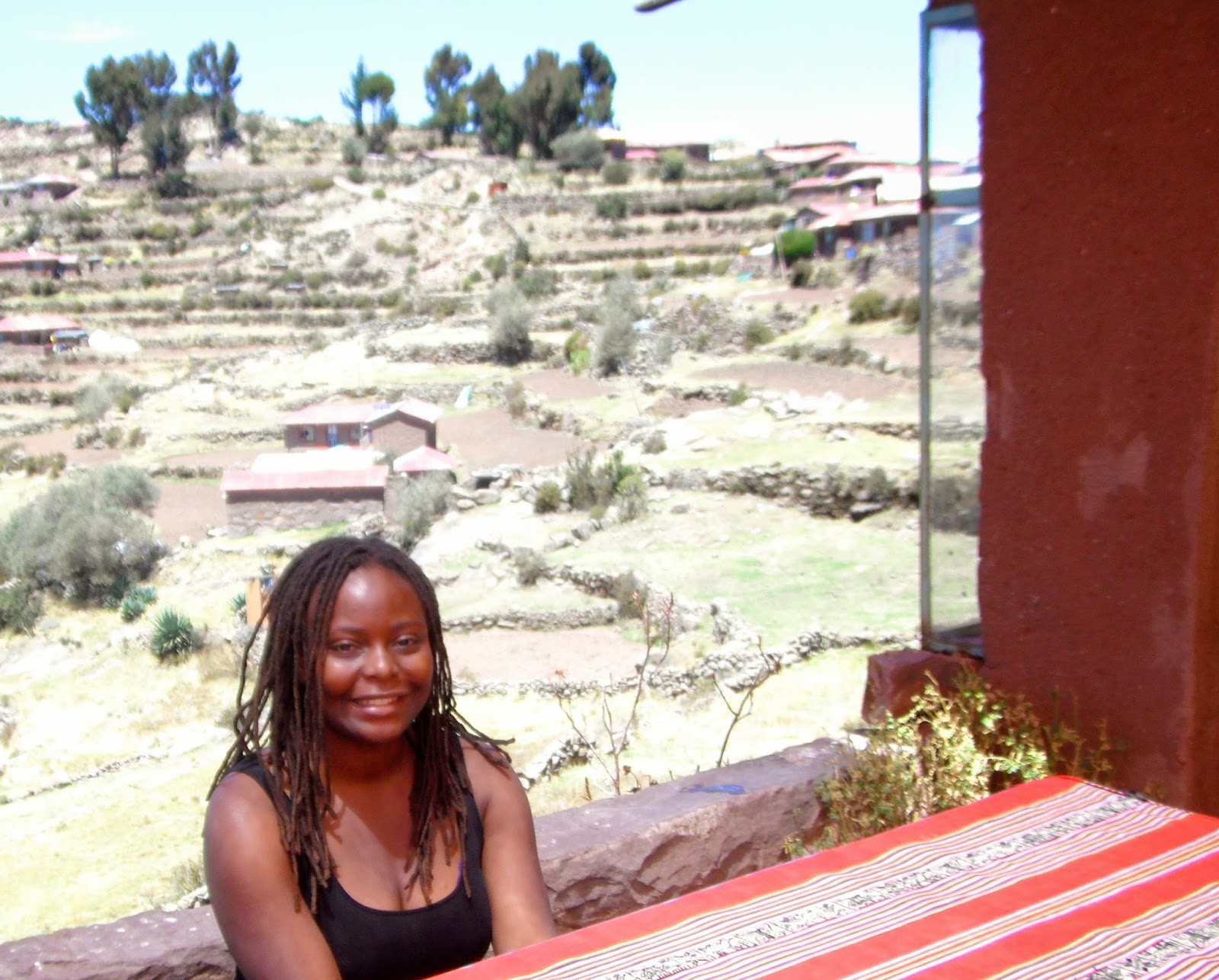 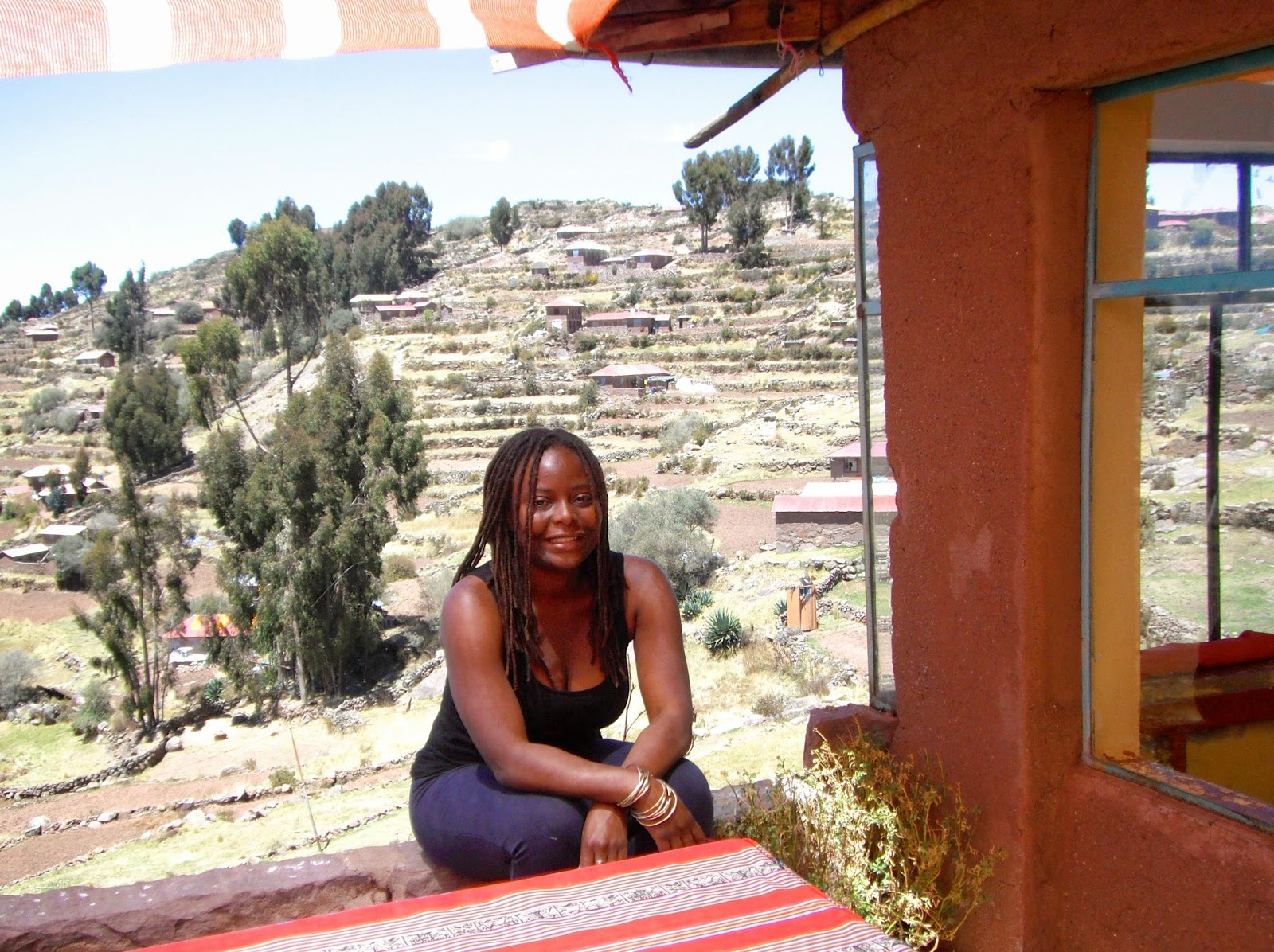 Finally it was time to leave the Island and we had to go down numerous steps to get to the boat, the views were stunning. 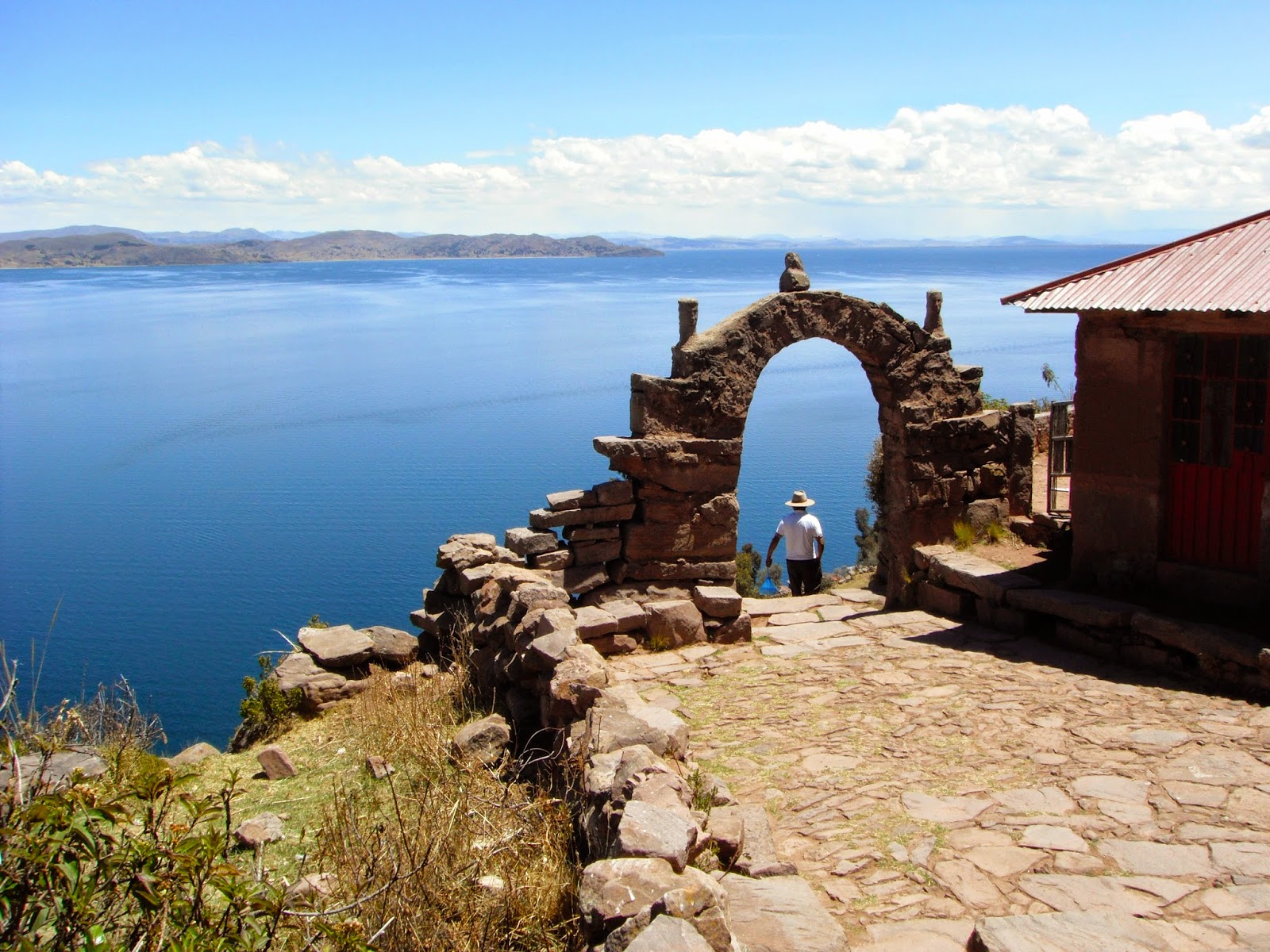 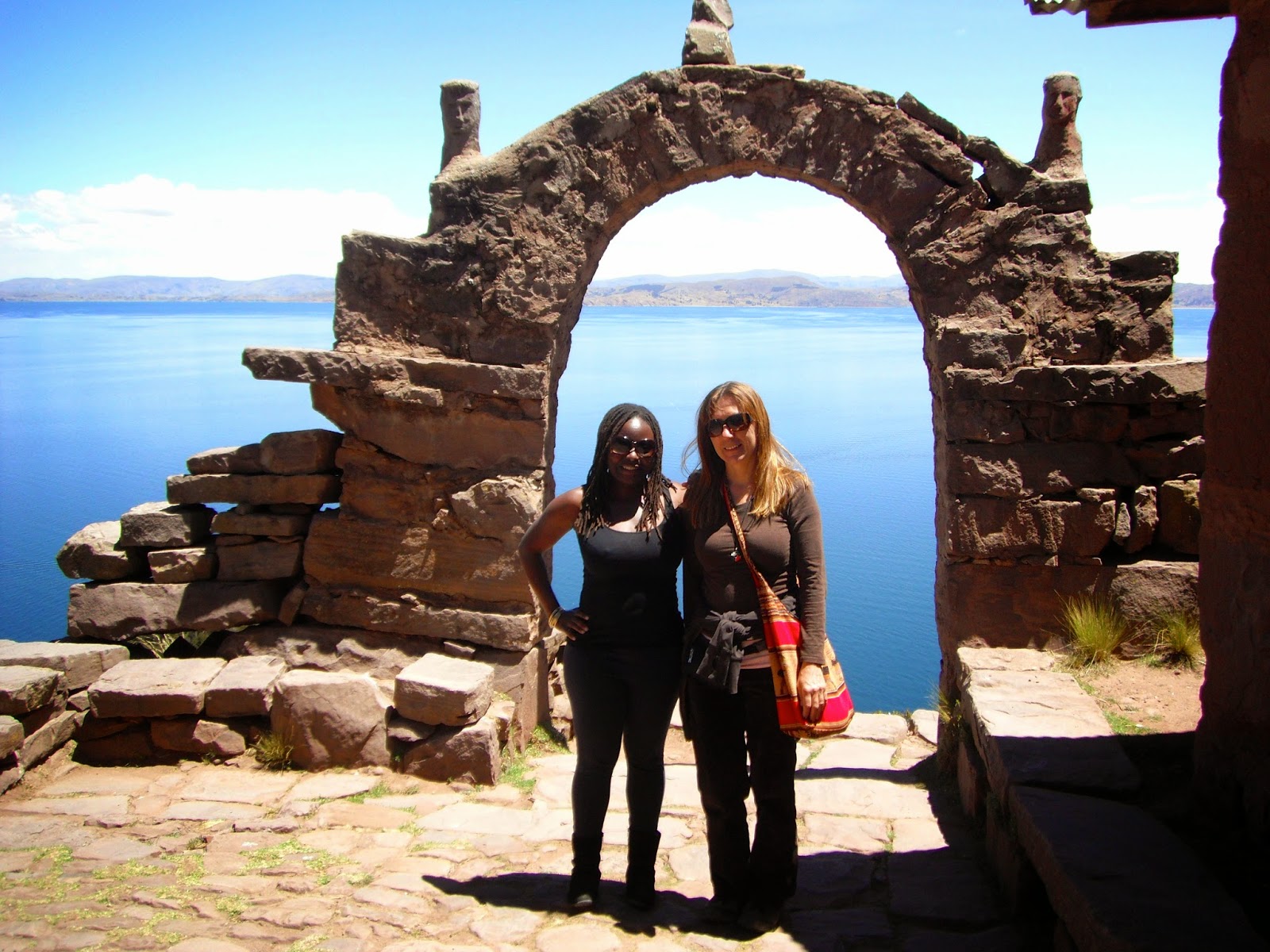 The whole group from the tour. Good times Indeed! 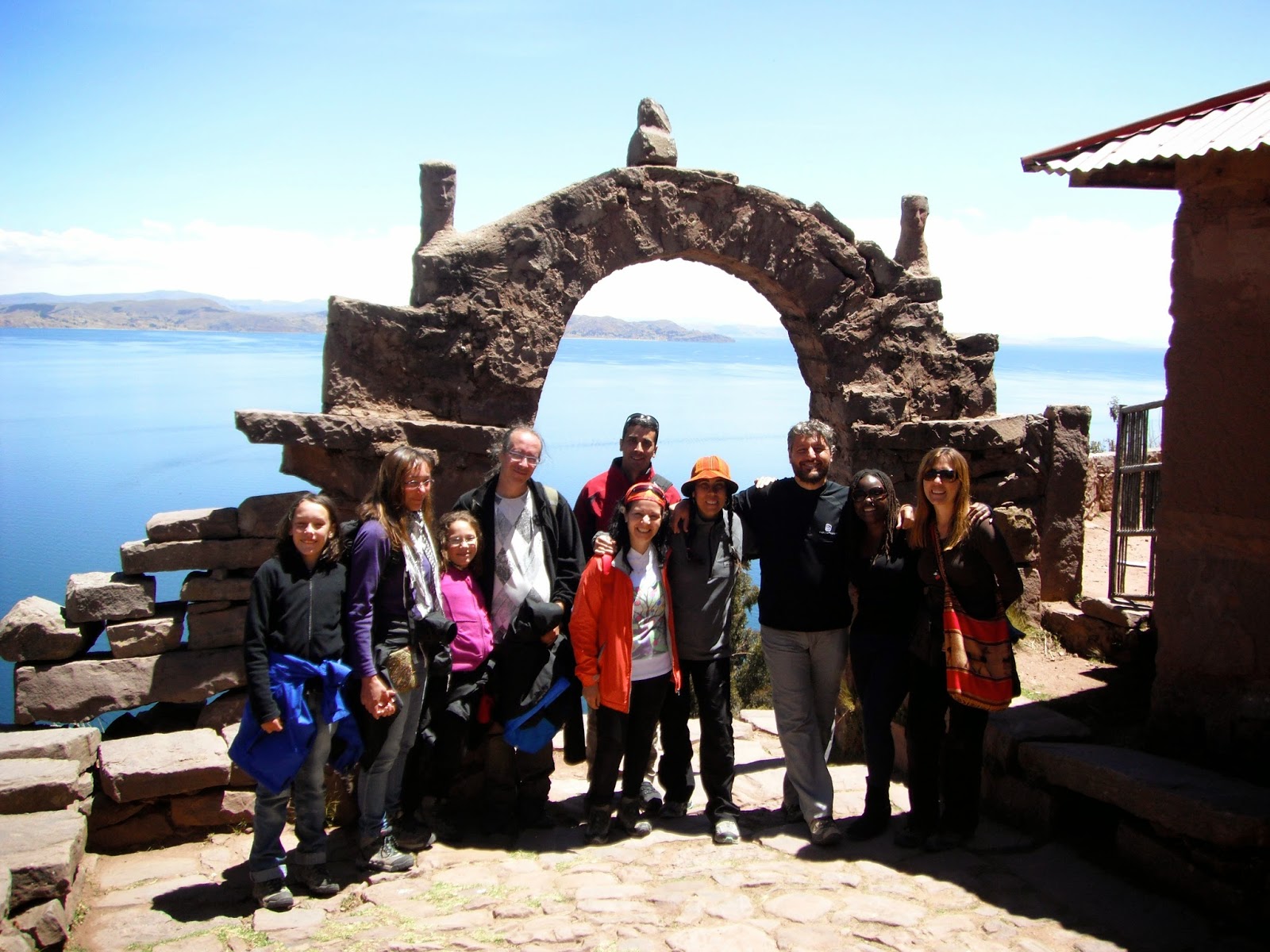 That's it folks! after leaving the Island it was time to head back to Puno the city at the shores of Lake Titicaca, in order to depart to our respective places. Others were heading to Bolivia, others were spending the night in Puno before continuing their journey while I was heading back to Cusco.

During this whole Island adventure we had no access to showers, can you imagine not showering for two days? all I wanted after leaving all the Islands was to take a long shower and wash my hair.

Puno is not a pretty city at all, I think it's one of those cities you pass through to get somewhere else. I am not going to lie, that city is a mess.

I assumed girls get married very young on the Island but the guide was telling me that they actually get married in their early 20s, I know this is still young but I was expecting to hear 15 or 16.

A lot of the Indigenous people I have seen here have red, pink or darker colored cheeks. I was told its because of exposure to harsh climatic conditions, they don't use cream for protection and are exposed to either very cold conditions or very hot conditions and it burns the skin. I have to admit though, the little kids with red or pink cheeks look so darn cute!