Titicaca & The Floating Islands of The Uros

The last couple of days have been quite an experience for me but in order not to overwhelm you with too much information, I will break my post into three different parts. Over the weekend I decided to book a 2 day and 1 night tour to Lake Titicaca which is the highest navigable lake in the world and borders Peru and Bolivia. I had heard about the floating Islands on the lake that are inhabited by the Uros, a pre-Incan ethnic group so I was curious to learn more about them and their way of life.

In order to get to lake Titicaca I had to take an overnight bus to Puno, a city that's located on the southern part of Peru and it's at the shores of the lake. The bus ride was only 6 hours so that wasn't too much for me and as usual, I slept through most of the ride anyway. I arrived in Puno very early in the morning and I got to meet the people who were in the same tour, after everyone was accounted for we were on our way to some new adventures. 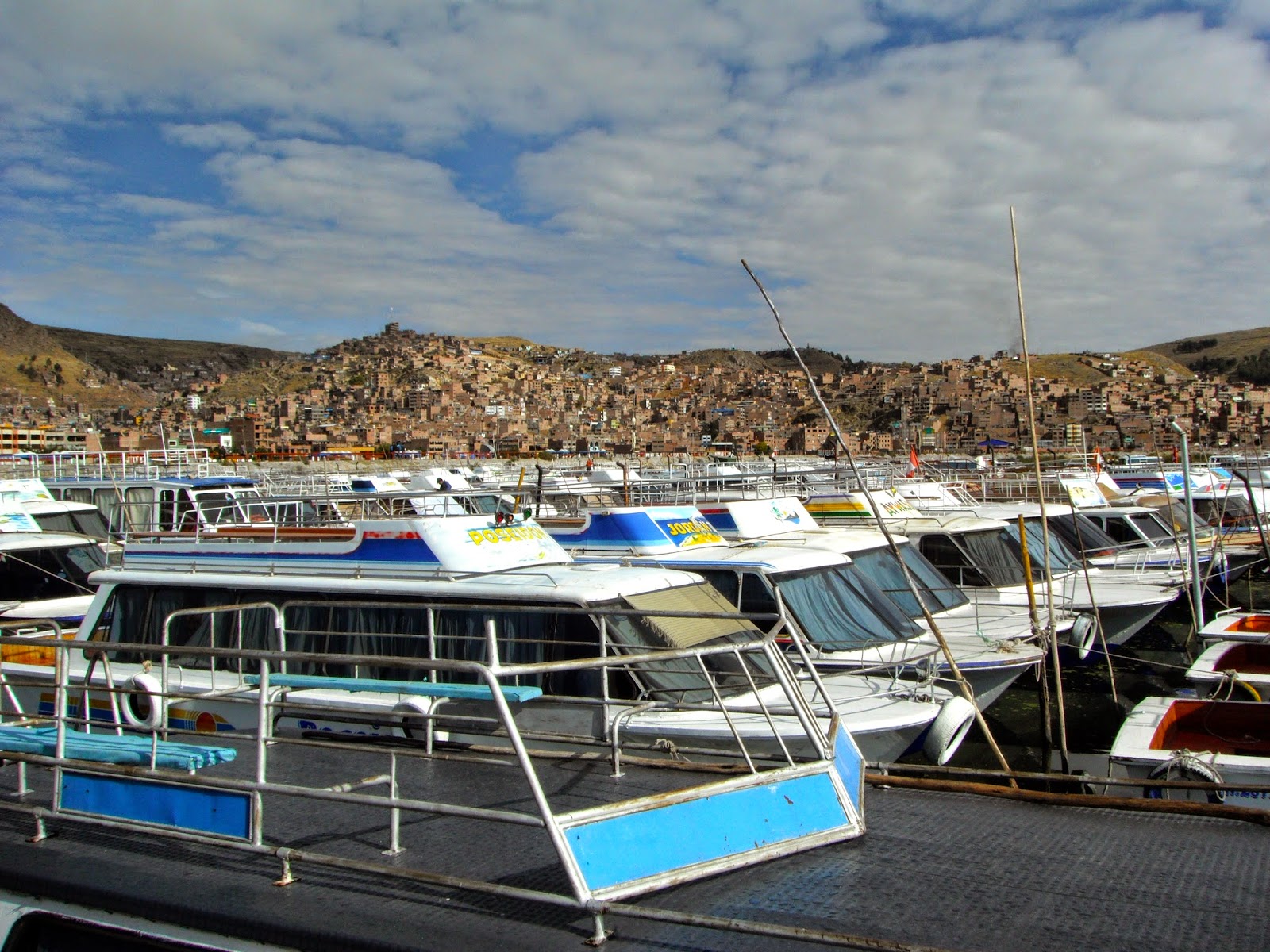 To get to the floating Islands we had to take a boat and the trip was actually longer than I expected, It was about 2 to 3 hours. In the boat the guide gave us some background information about the Uros and explained their customs and what to expect. As mentioned earlier, the Uros are a pre-Incan ethnic group meaning they were around way before the Incas. They live on floating Islands on Lake Titicaca and have maintained a lot of their customs to this day, they speak Aymara which is their native tongue but some also speak Spanish as that's what's taught in schools.

The guide gave us a lot of information which was very interesting and made for an interesting boat ride which I enjoyed, thank goodness I didn't get any motion sickness! The sun was out in full force but it was actually cold and a jacket did come in handy 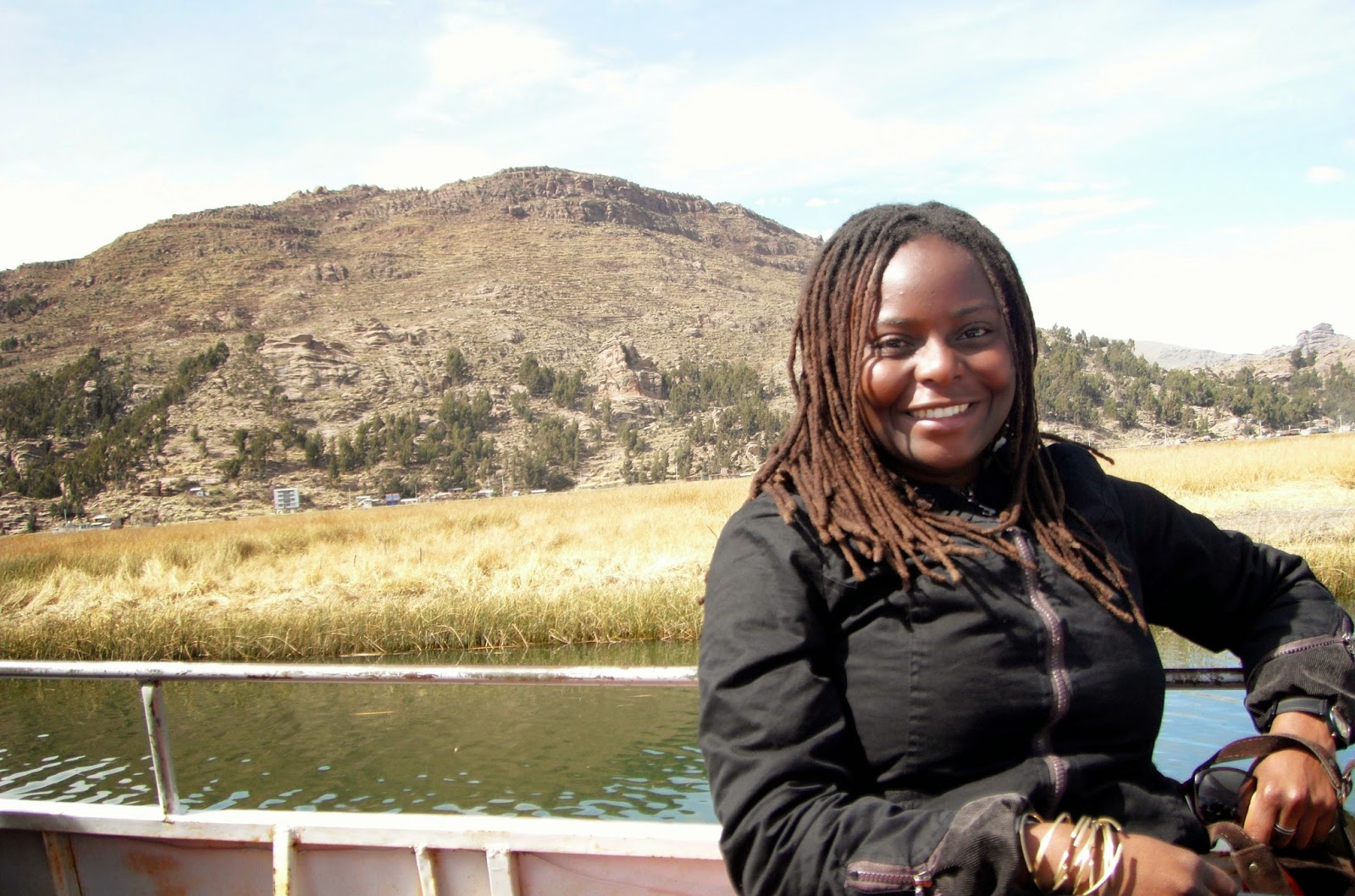 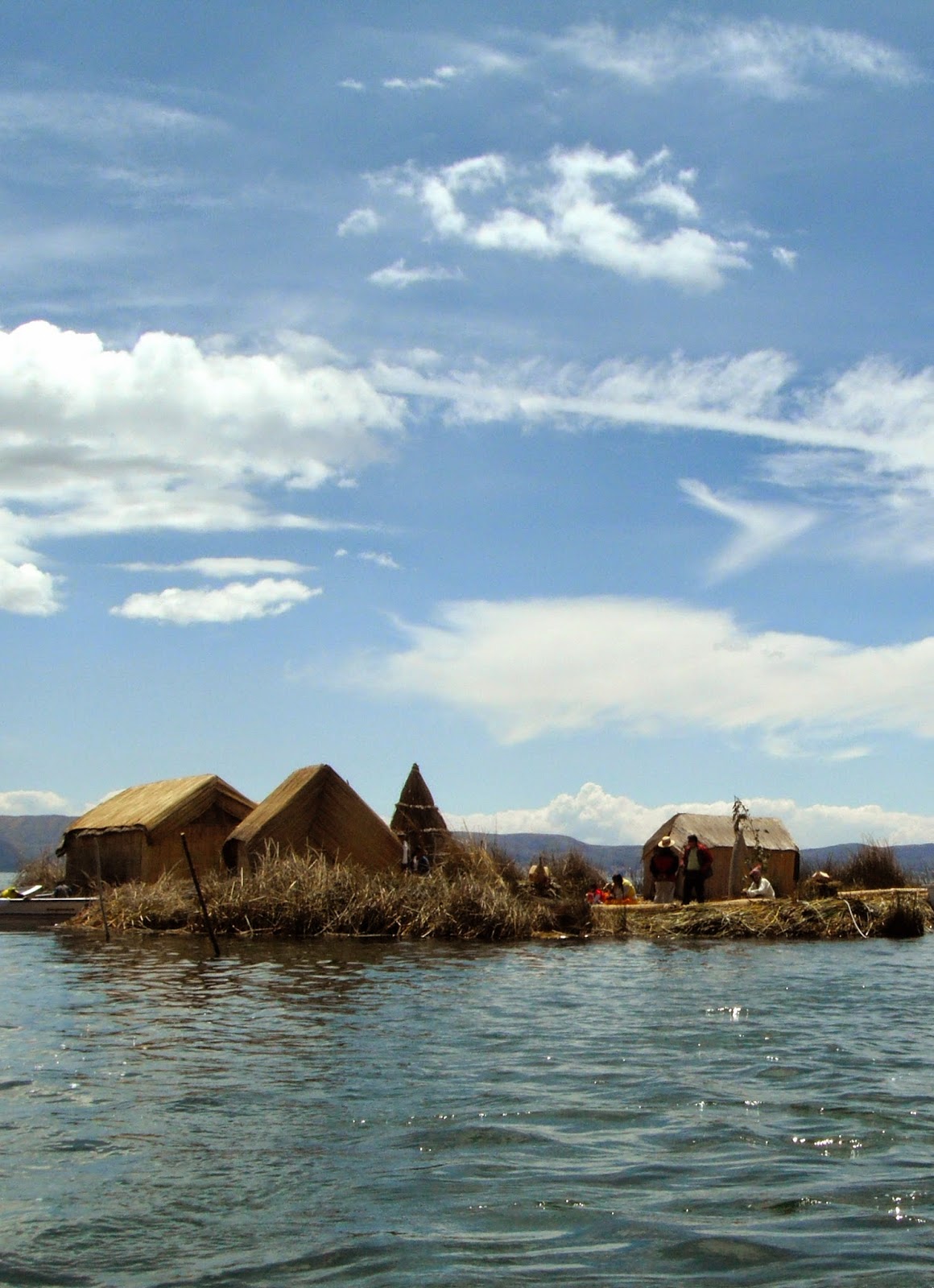 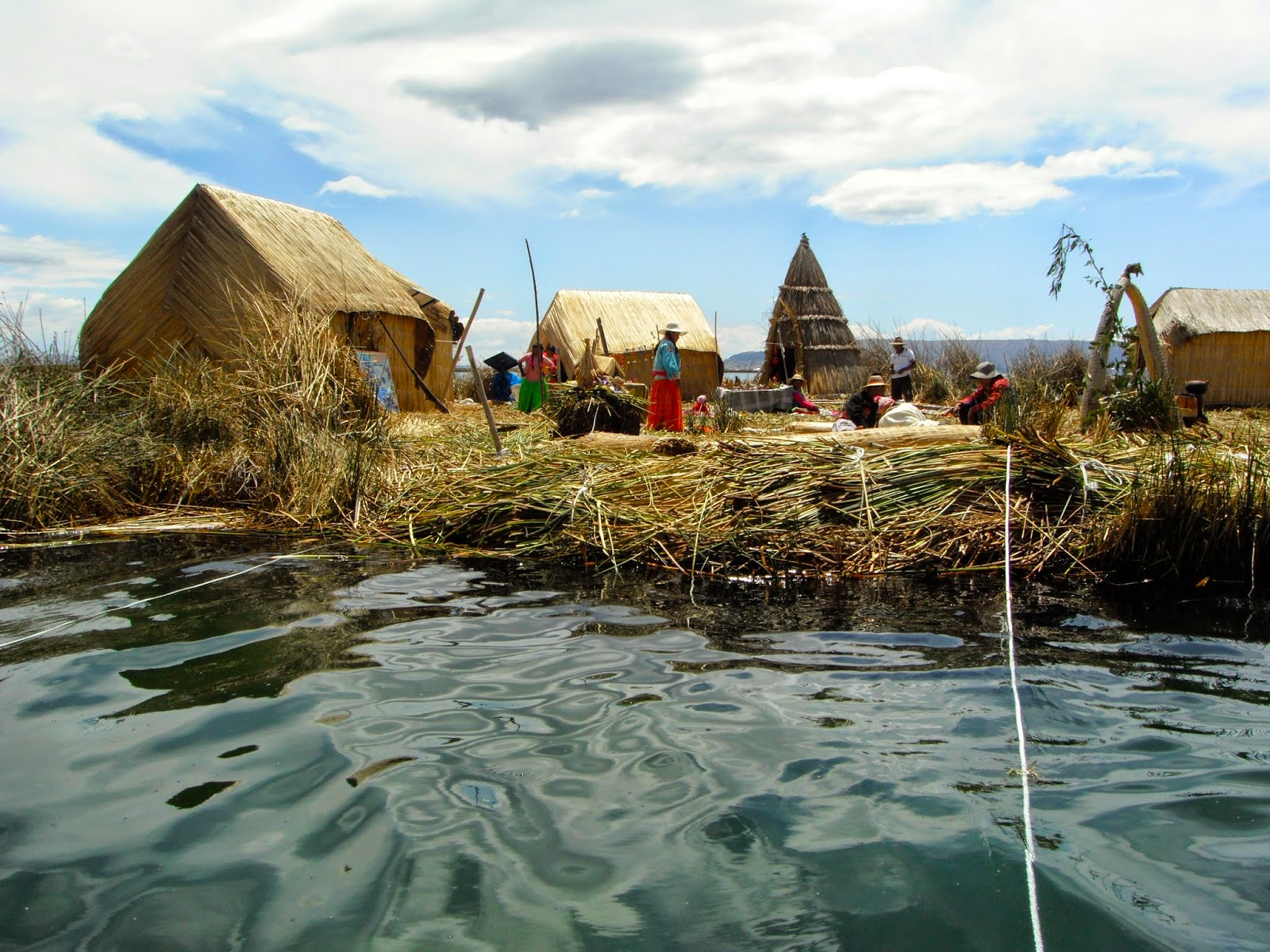 The Uros were very friendly and since tourism is also part of their means for earning a living, they were only too happy to display their way of life and of course had some of their products on display for sale. 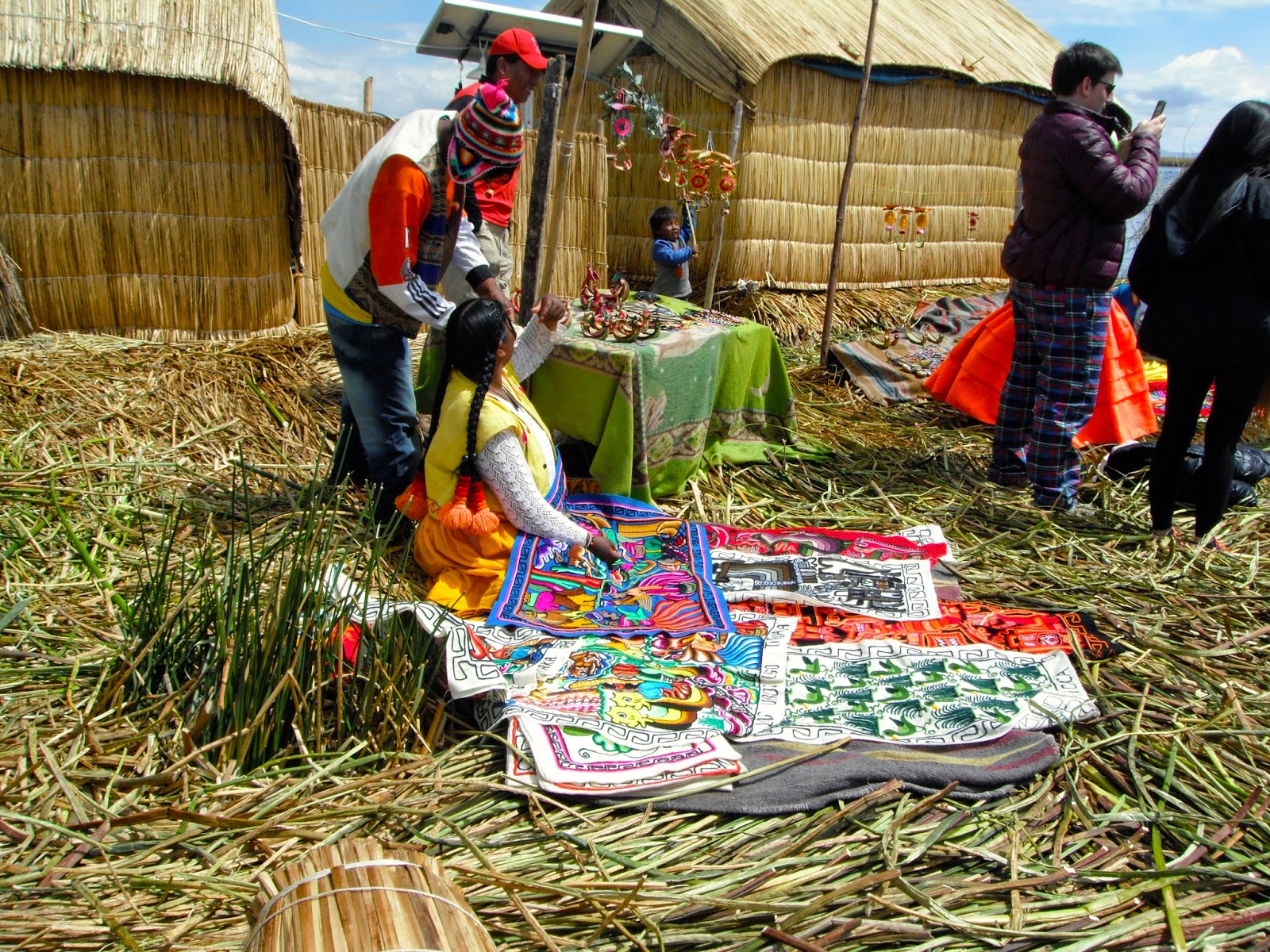 We got to meet the leader of the Island who showed us how they construct the floating Islands and also explained their way of life on the Island. Each Island takes a year to construct and it's made from reeds that grow on Lake Titicaca, the Islands can last up to 40 years but have to be maintained every so often which as explained by the leader, is a grueling task but must be done. Walking on the Island felt a bit like walking on a water bed or something, it's hard to explain. 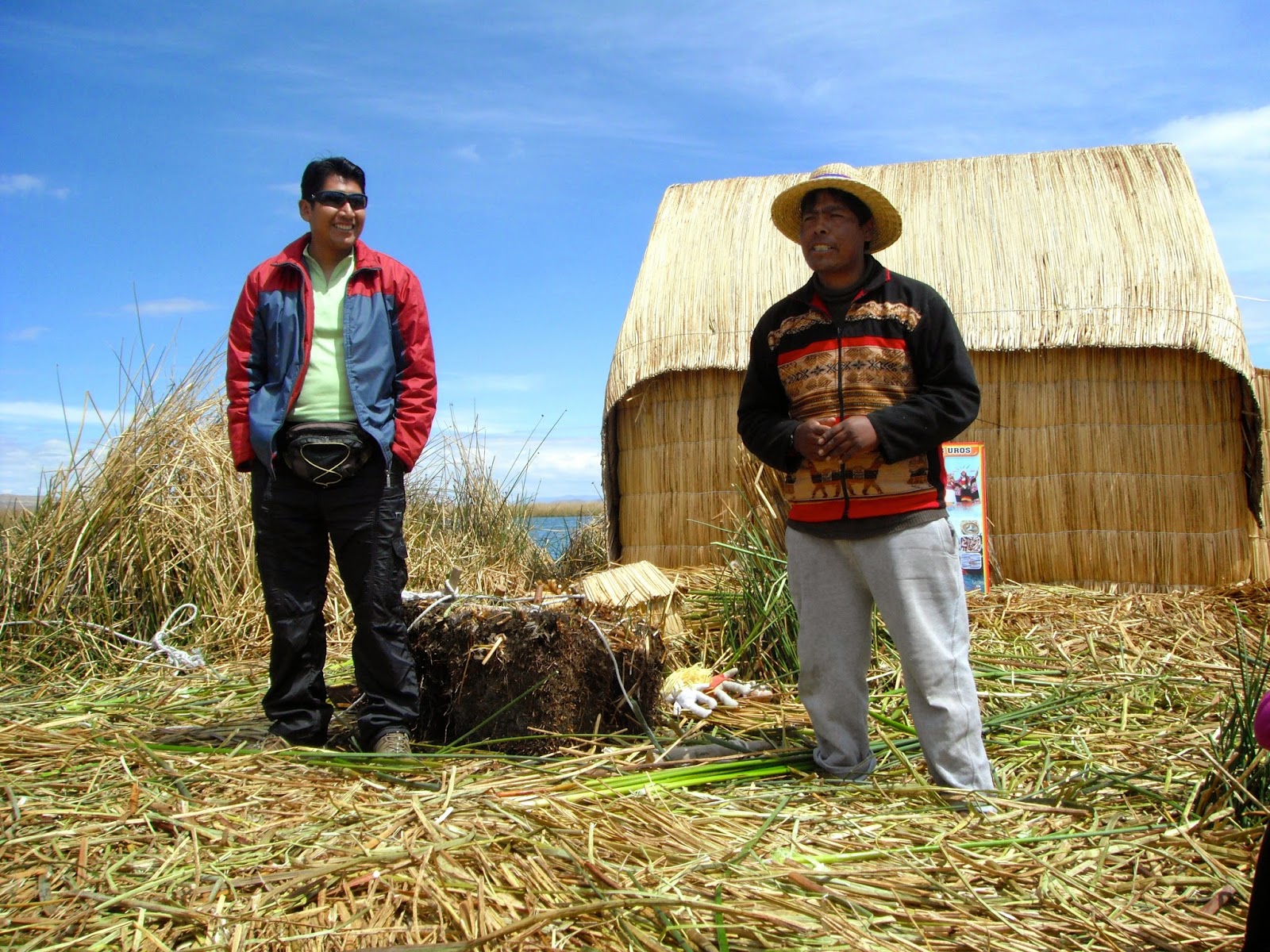 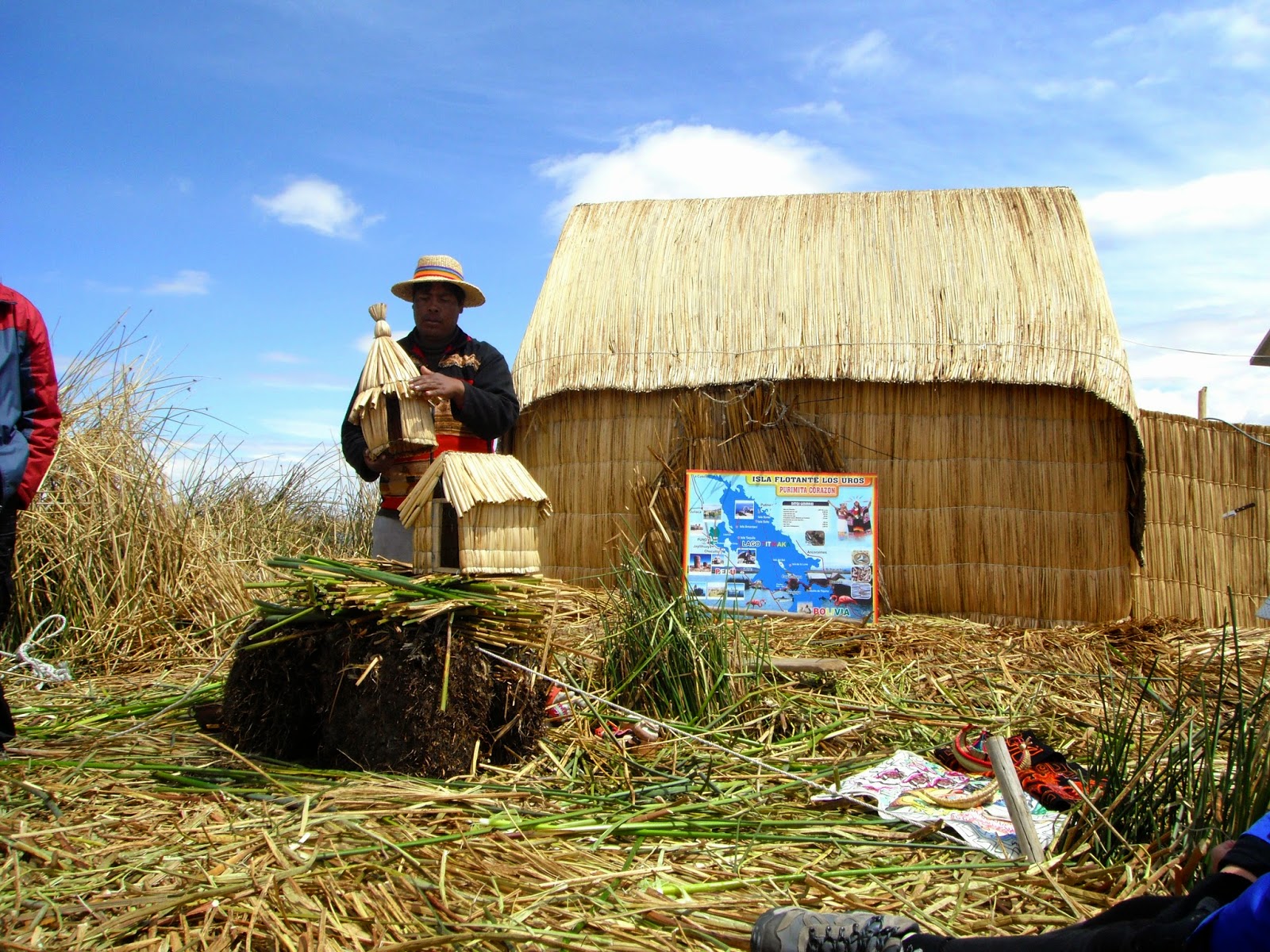 The women had on very colorful traditional dressing. 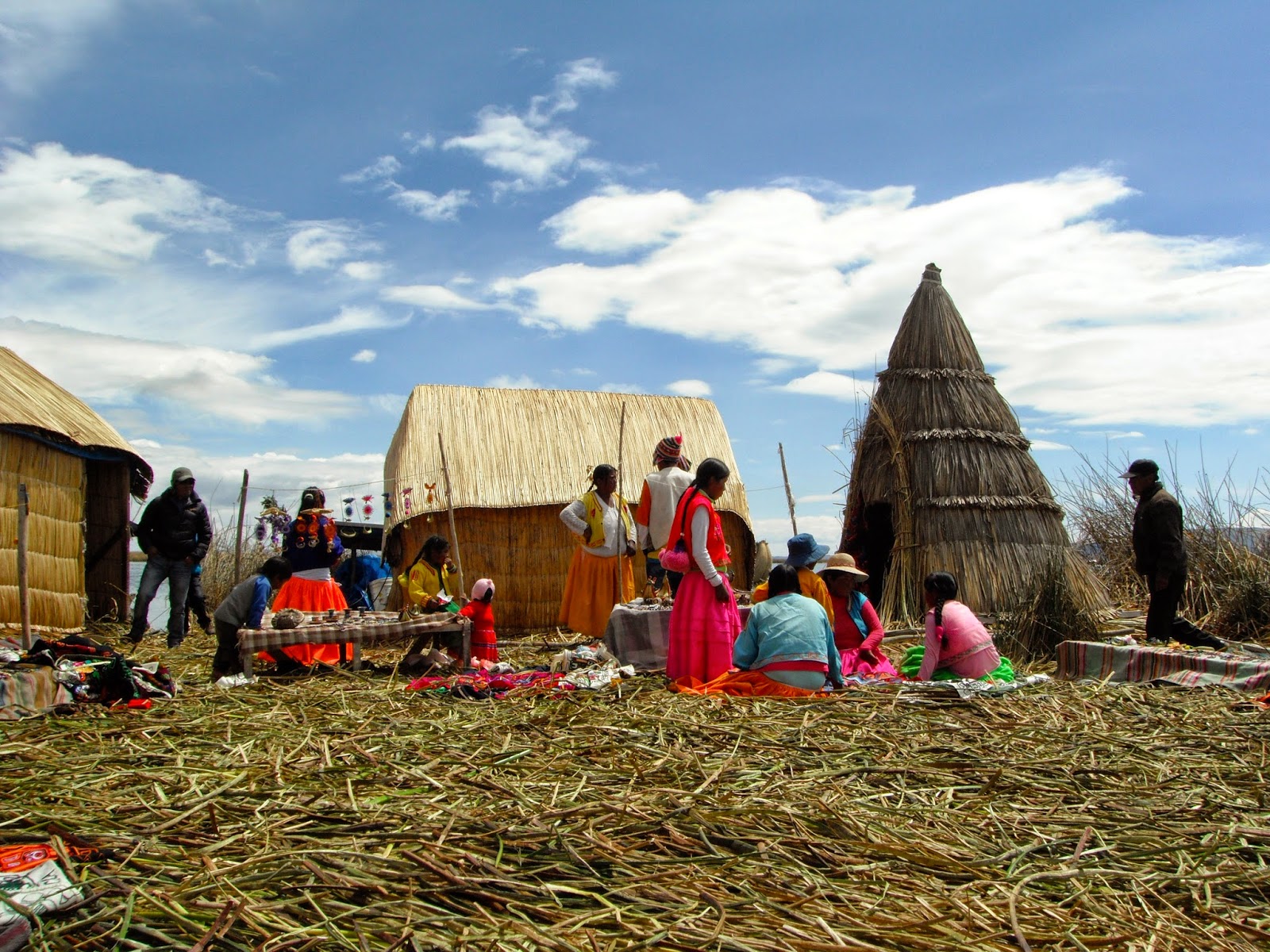 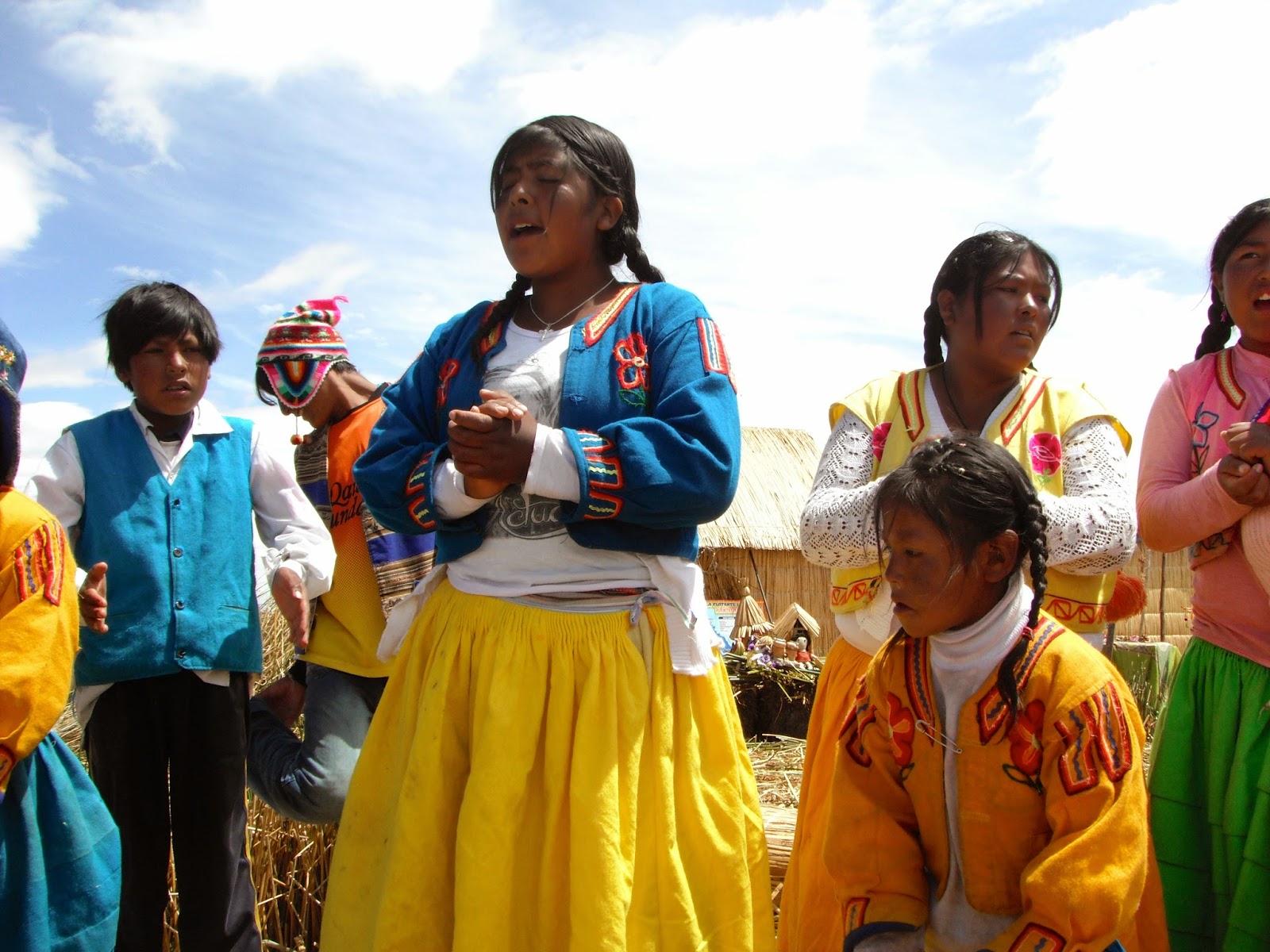 To get from one Island to the next, the Uros use these boats you see below which are constructed with  reeds from the lake. The material was actually very sturdy and we even got to go on one of their boats for a ride around the Island just to experience how it is traveling in these boats. 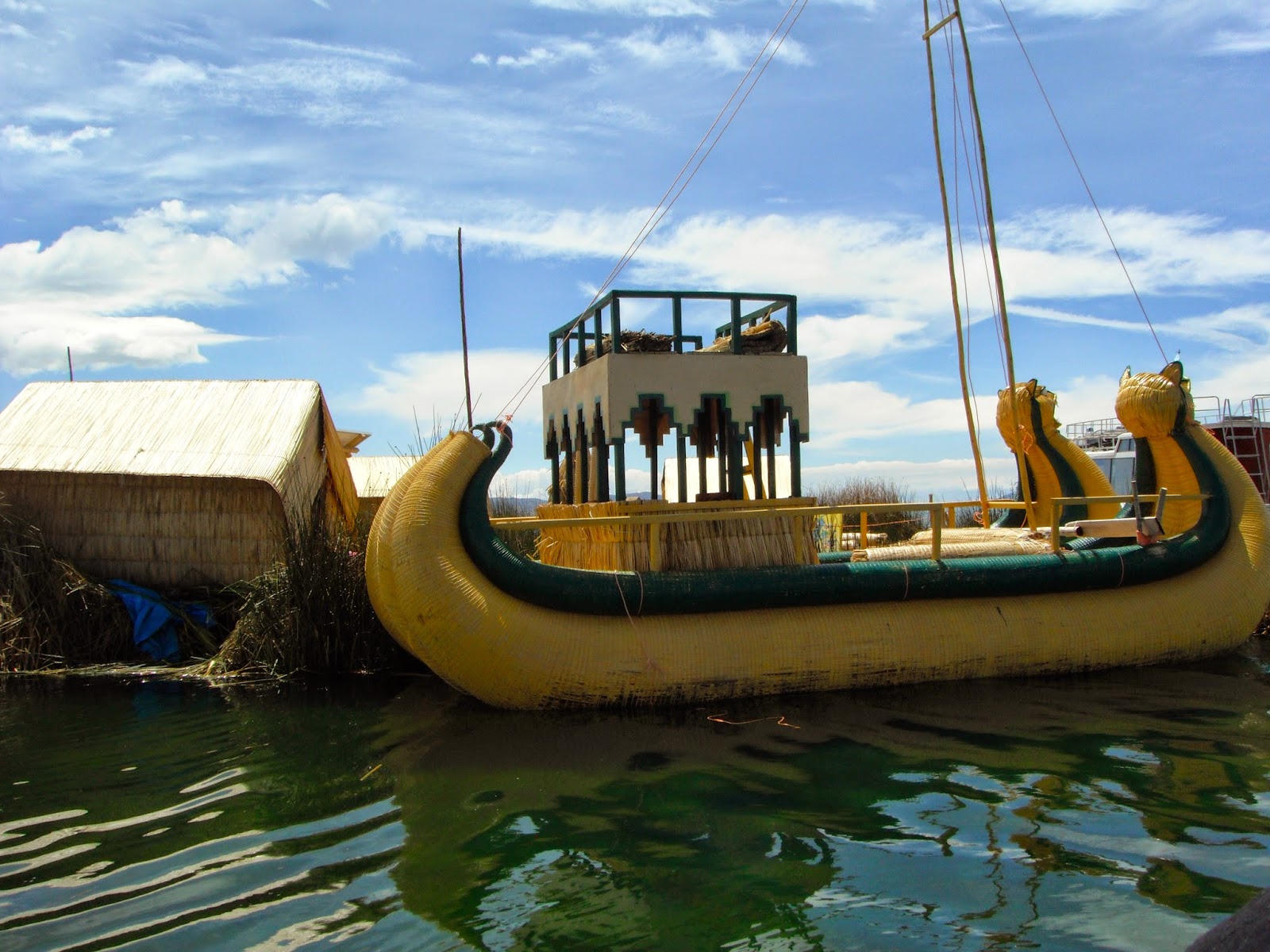 That's it folks, it was a very interesting experience as I got to learn so much about how other people live.

The kids from the Island were very fascinated by my hair and everyone wanted to touch it. One kid even tried to yank a piece of my hair and I had to politely tell him to take it easy because it hurts.

Speaking of hair, next time I will be very careful on who touches my hair. This one kid from the Island had just been eating fish and she touched my hair trying to braid it, let's just say my hair has a very strong fishy smell that I have had to endure for the past couple of days since I had no access to a shower. Trust me! it stinks!!!

I was asking the guide how the Uros clean themselves or where they go if they need to use the toilet. He said they swim in the lake and use the water to clean themselves, as for the toilets they don't relieve themselves on the islands but on some nearby reads which absorb the waste and ensure the water isn't contaminated because they drink the water from the lake.

Puno is at a higher altitude than Cuzco so I was actually scared that I would get sick from the high altitude. You should have seen how I was religiously popping the altitude sickness pills and drinking coca leaf tea like my life depended on it. Actually, my life did depend on it!

Due to the sun exposure some of the Uros have darker skin, some even had the same skin tone as me. Apparently they have adapted so well to the sun exposure that their skin is less sensitive and you never hear of cases associated with skin cancer among the population. Of course you know being at high altitude the sun exposure is no joke and you can easily burn.