Today I took an interesting tour which included Salineras de Maras (salt mines of Maras) and Moray which is an archaeological site that contains agricultural terraces that were used by the Incas. The tour started early in the morning which was fine by me because I managed to catch up with my sleep during the long drive.

The first site we were meant to pass by was Salineras de Maras but before getting there we stopped at this small town to check out the process of making the famous traditional textiles you see all over Cuzco. It was amazing seeing the whole process from scratch and seeing the end product which was beautiful. We were shown how the hair from alpacas or sheep are first cleaned then made into thread, after this process the formed thread is dyed and finally woven to create very beautiful wall hangings, mats or table runners.

In the picture below you can see the thread being dyed using naturally produced dyes from plants. 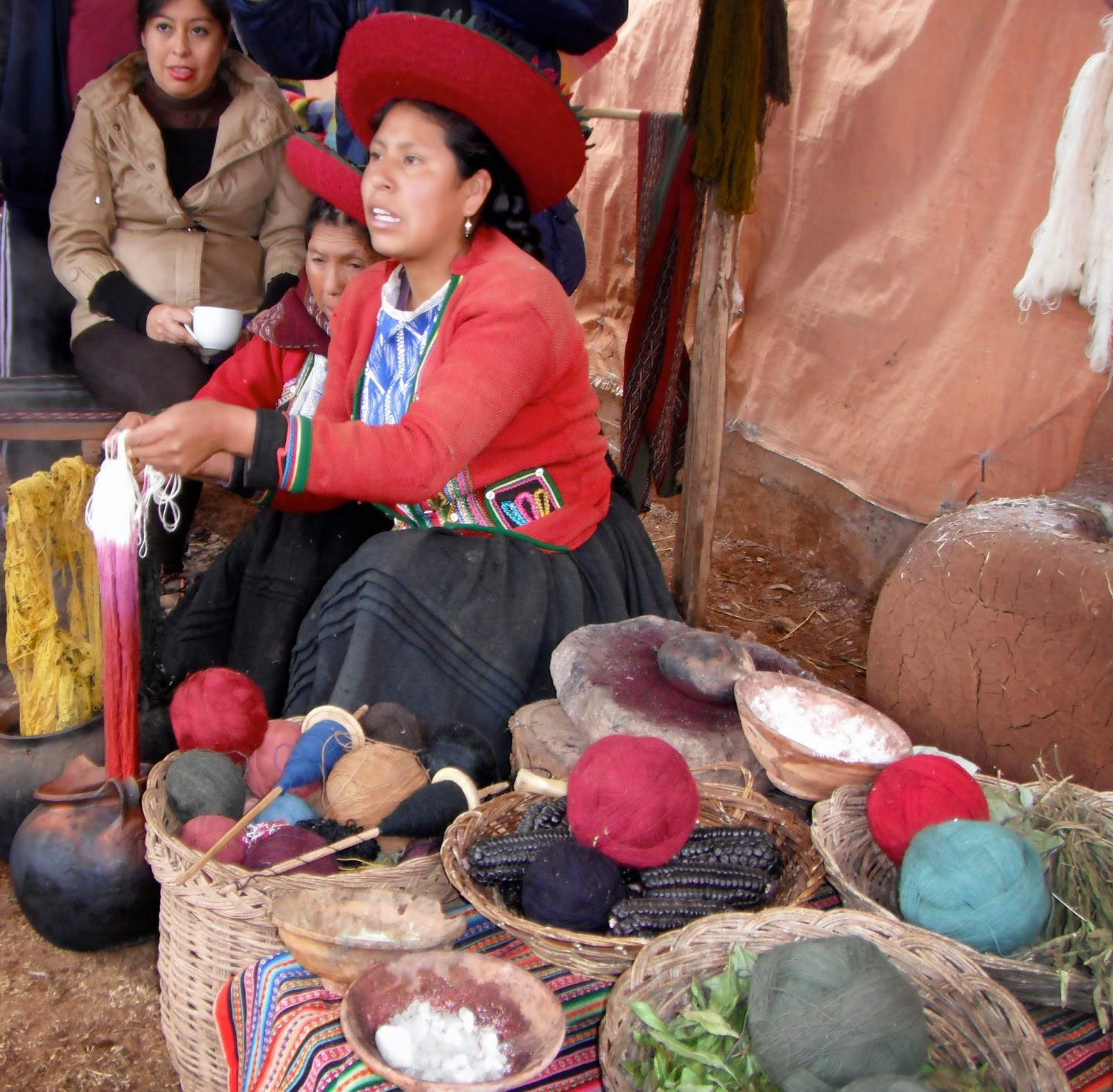 See the contraption in the picture below? this is how the weaving is done. One of the women was saying they can work for up to 5 hours a day on one product. 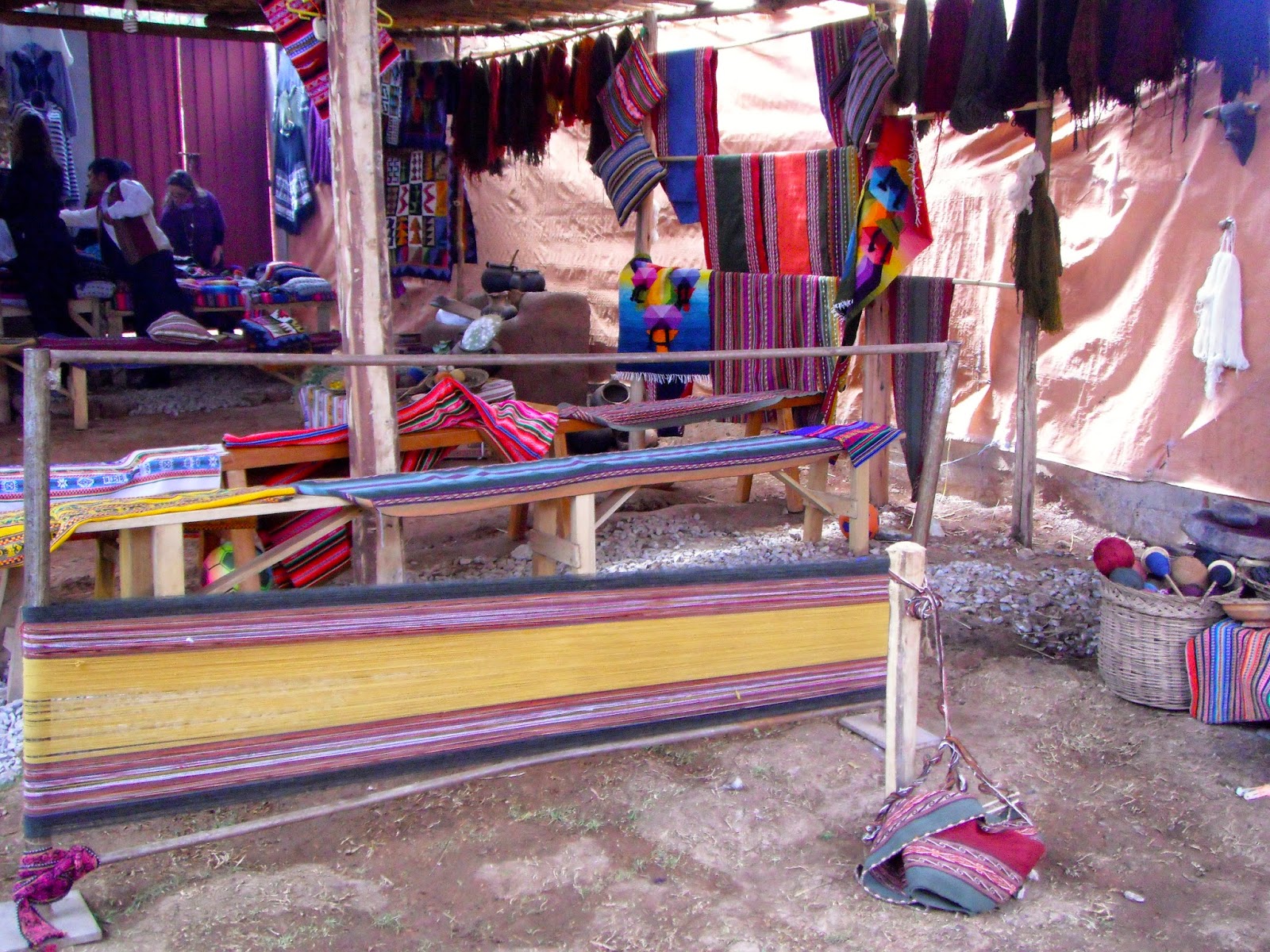 The final products. Yes! all that is natural and it take weeks to finish depending on the design and size. 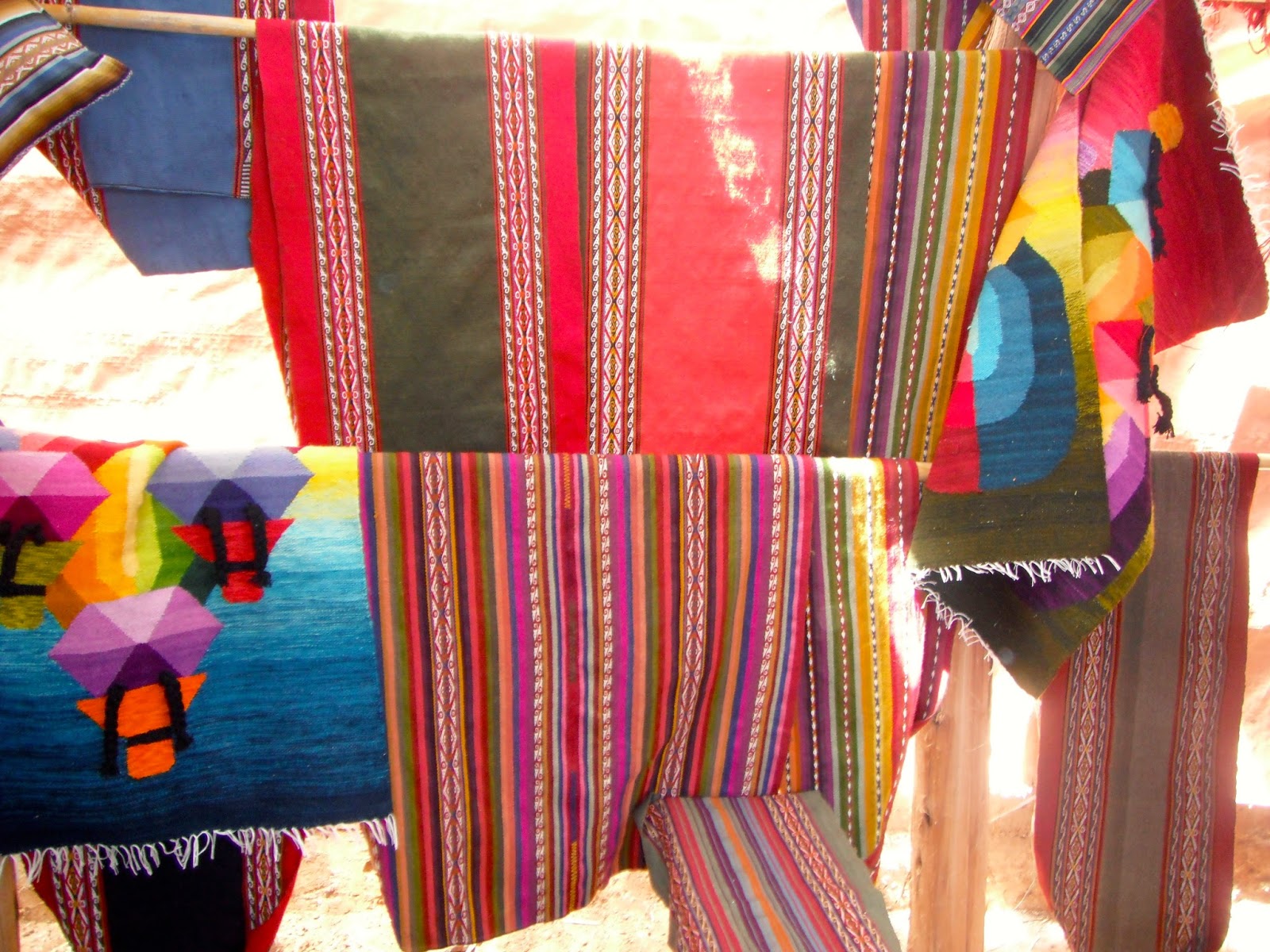 This was funny, just incase you got carried away by the traditional aspect of the whole weaving process, you had credit card machines to remind you of the modern conveniences. 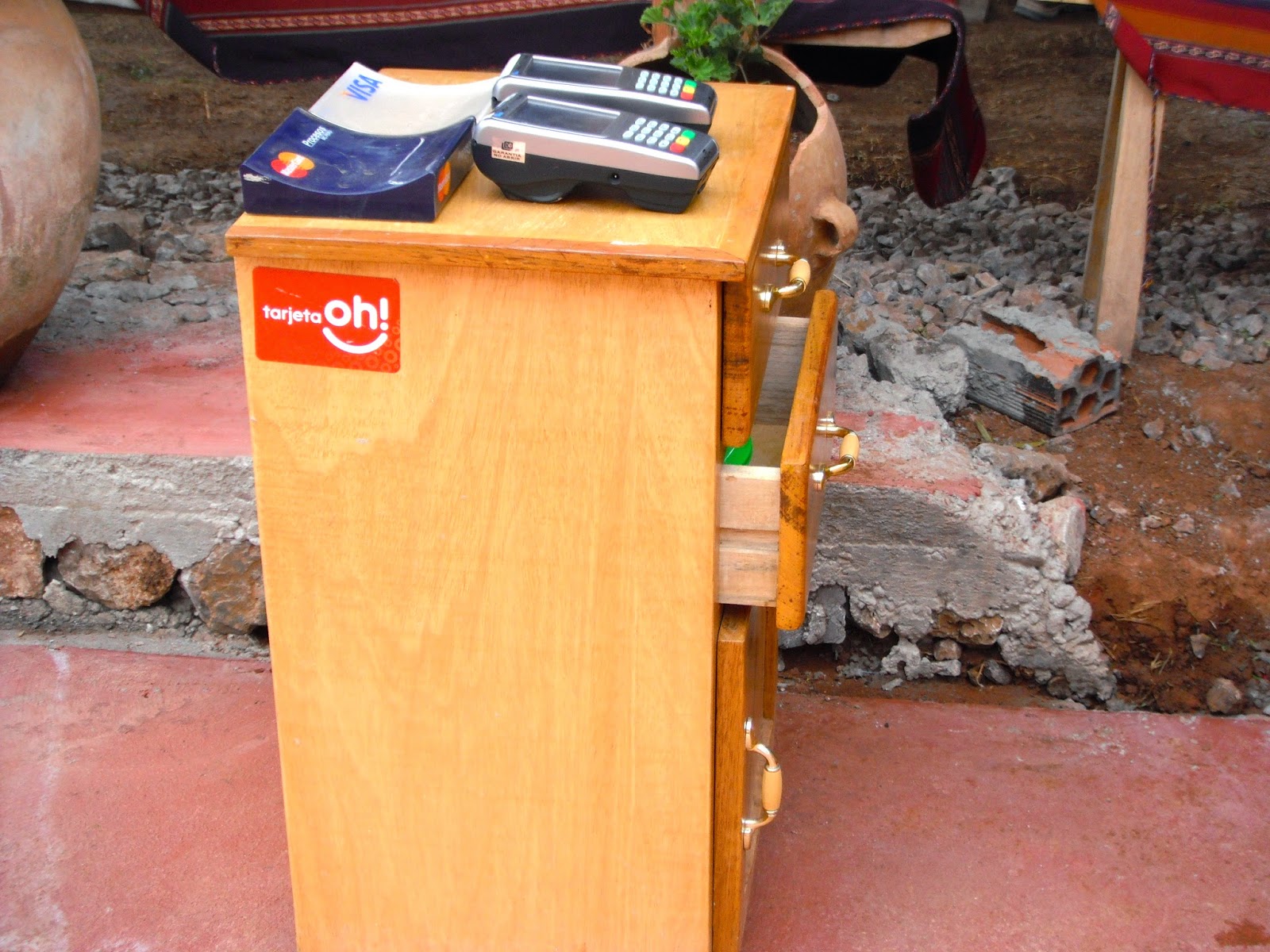 After checking out the very interesting weaving process we finally made it to Salineras de Maras. Salt  was a very important commodity during the Incan times and it was actually used as currency for trade back in those days. These mines are still used up till today for salt production.

The mines are located down in a valley and as the tour bus descended we could see the very pretty site of the white salt against the backdrop of the hills and mountains around. It's hard to describe it and pictures don't do them justice. 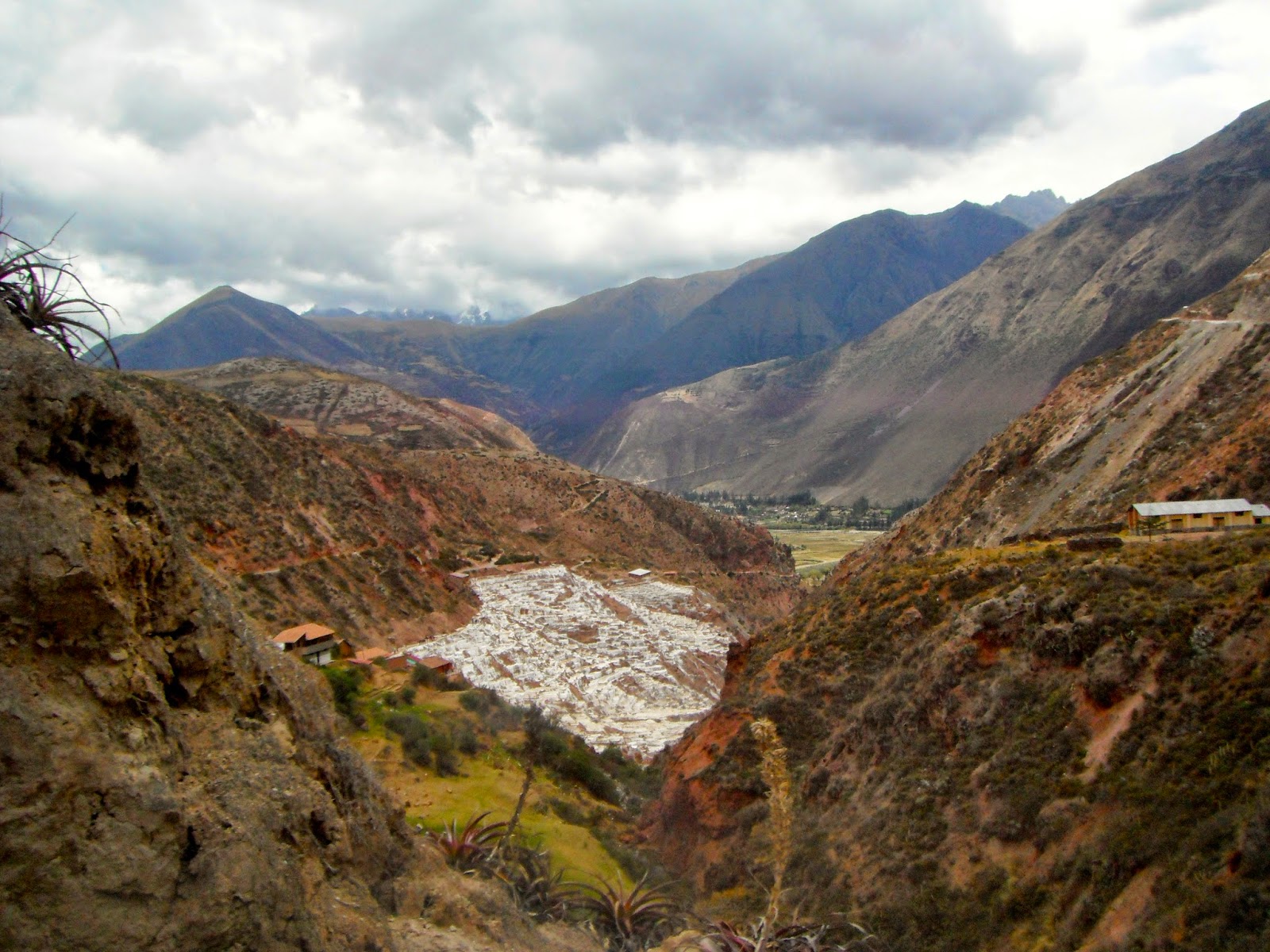 Closer image of the salt mines. Since the mines were down in a valley we had to make our way down to get a closer look, the walk was a bit tricky because you could easily slip and fall. 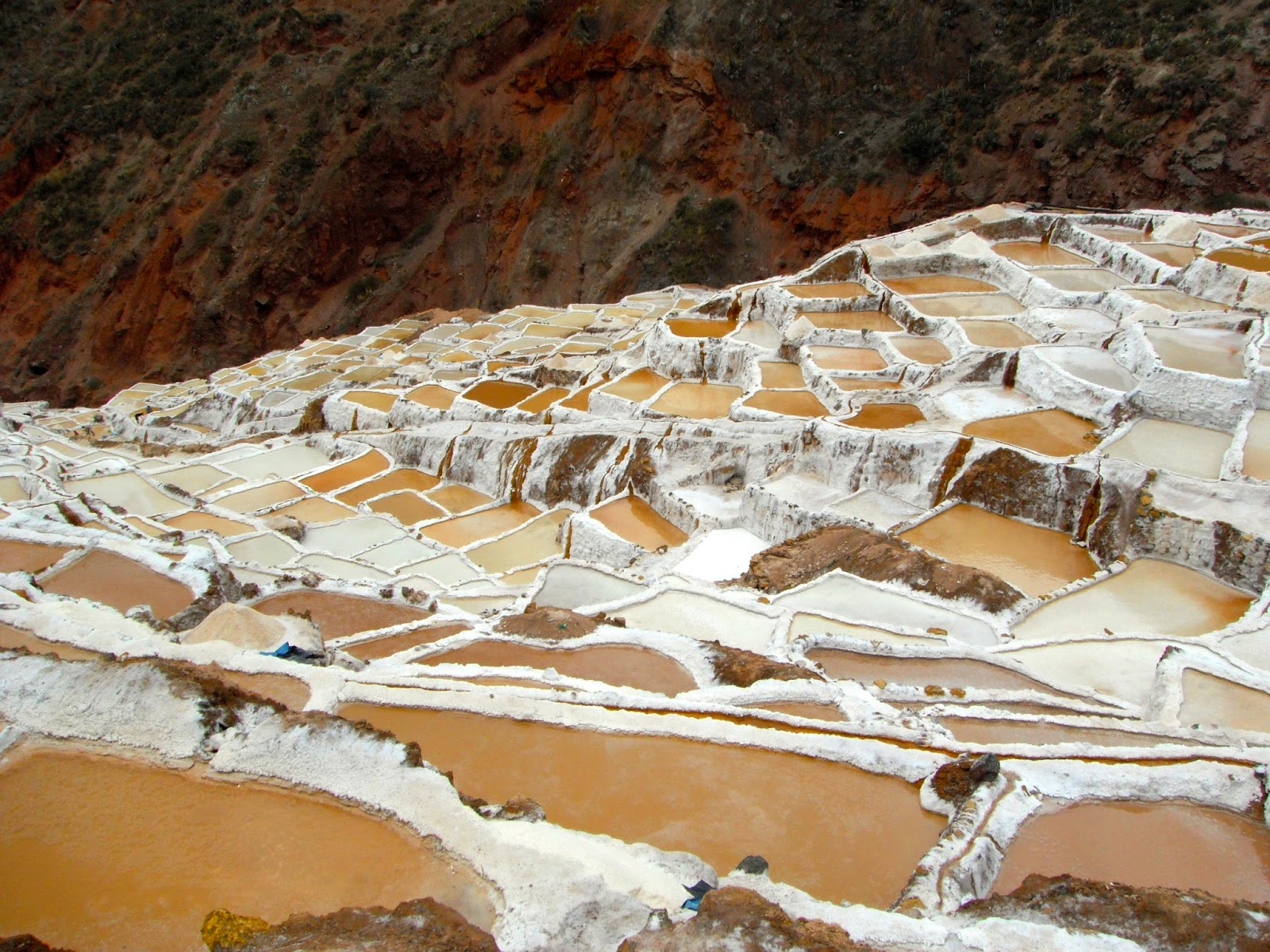 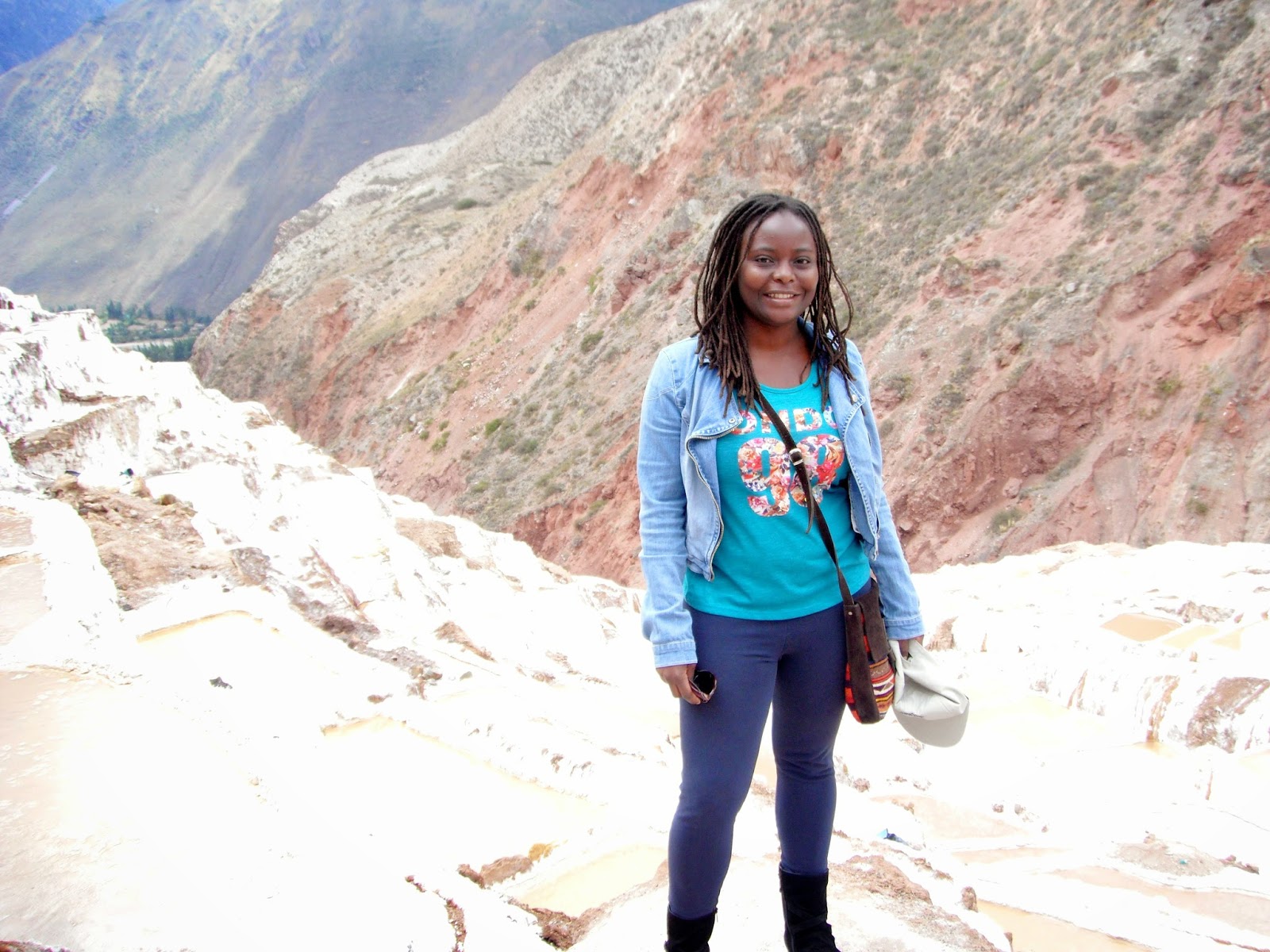 Apparently there are different types of salt. There is salt used for cooking and salt used for medicinal purposes, you can not consume the medicinal salt but have to take a bath with it. The guide was also telling us that it's not good to eat the salt directly from the mines because you could get sick. Iodine has to be added to the salt to make it consumable. 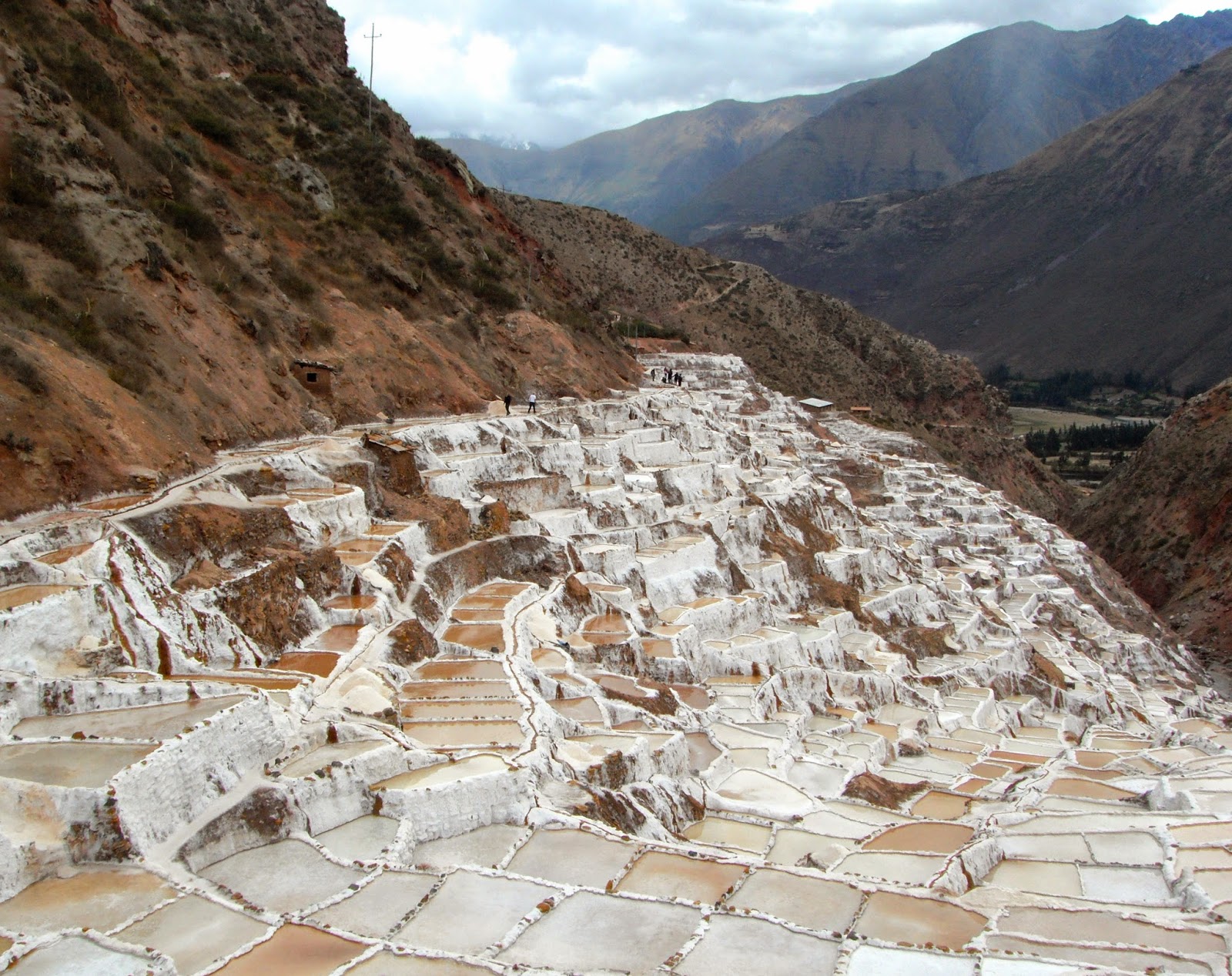 After having our fill at the salt mines, we headed to Moray an archeological site that's incredible! as I mentioned before this site consist of agricultural terraces that were used by the Incas. The structure of the site is a site to behold but the story behind it is even more amazing. This is where the Incas performed agricultural experiments and acclimatized different crops over a period of time before growing them in different areas.

Look at the picture below, see the different layers of terraces? each layer has a different temperature so the Incas would use the variations of these temperatures to acclimatize the different crops until they achieved the wanted results. Can you imagine how they came up with the idea of building these terraces? it's amazing if you ask me. 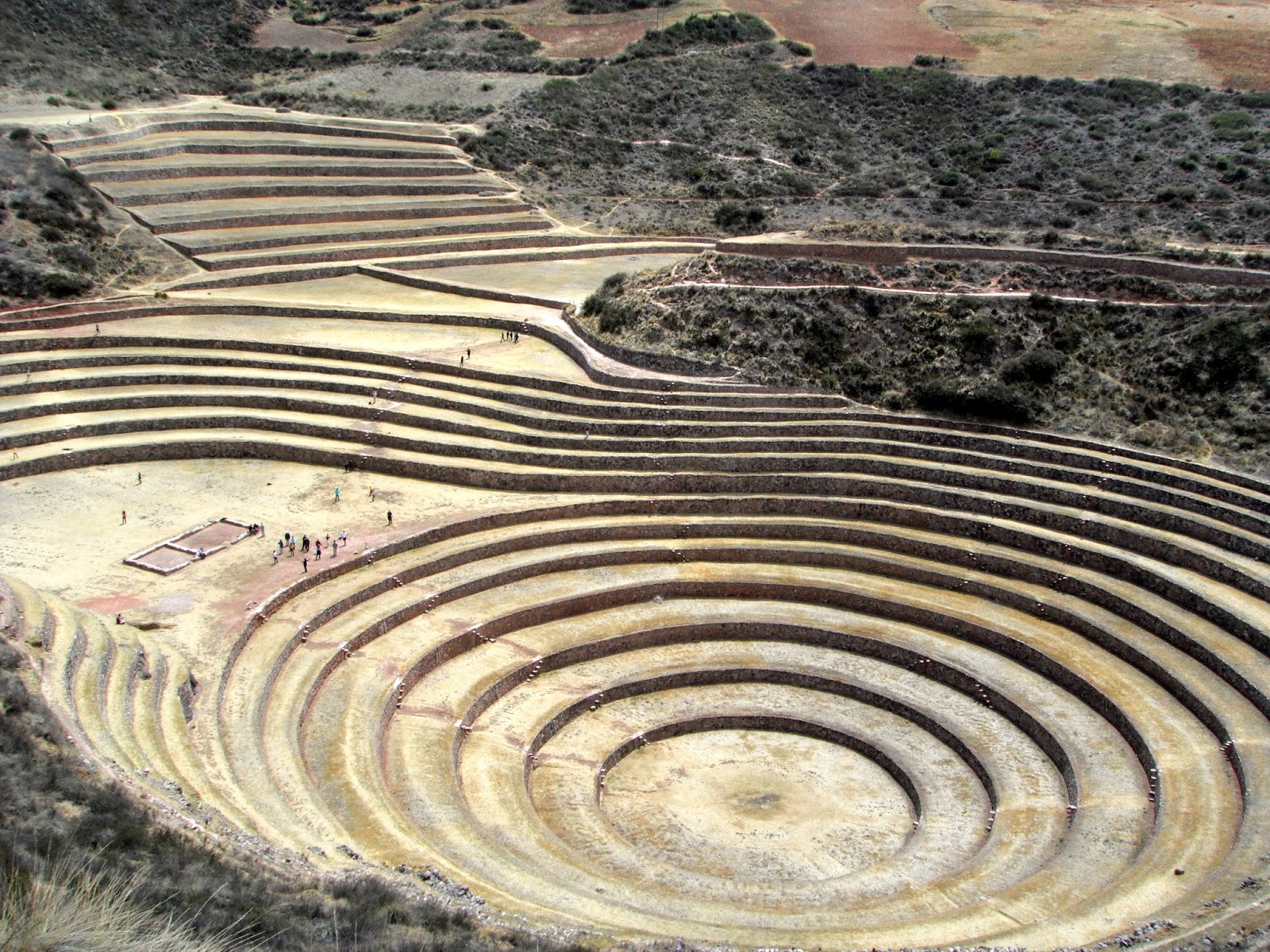 As you can see from the picture below, the terraces are down a valley so once again we had to go down to get close to the terraces. 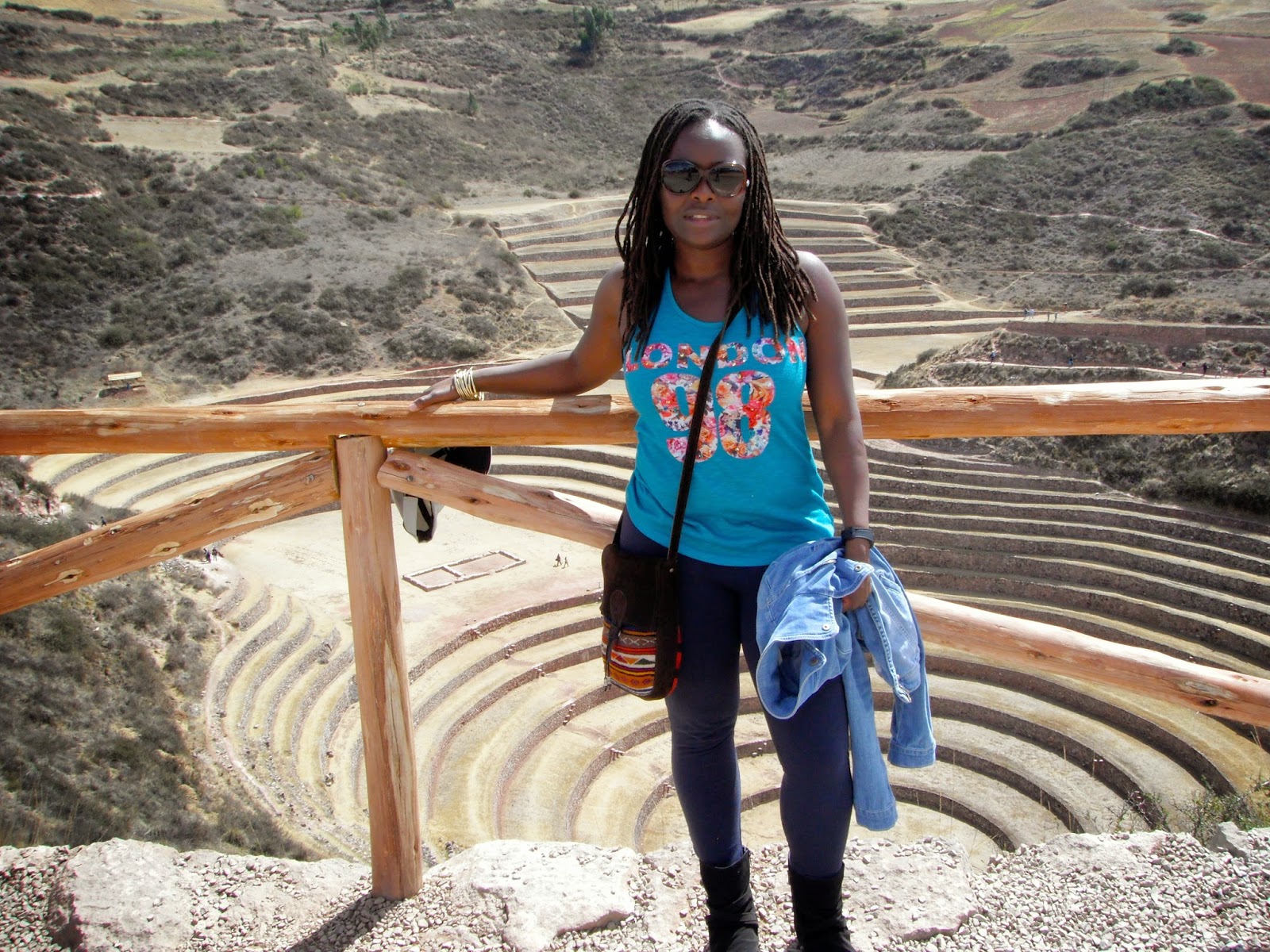 Closer look at the terraces. 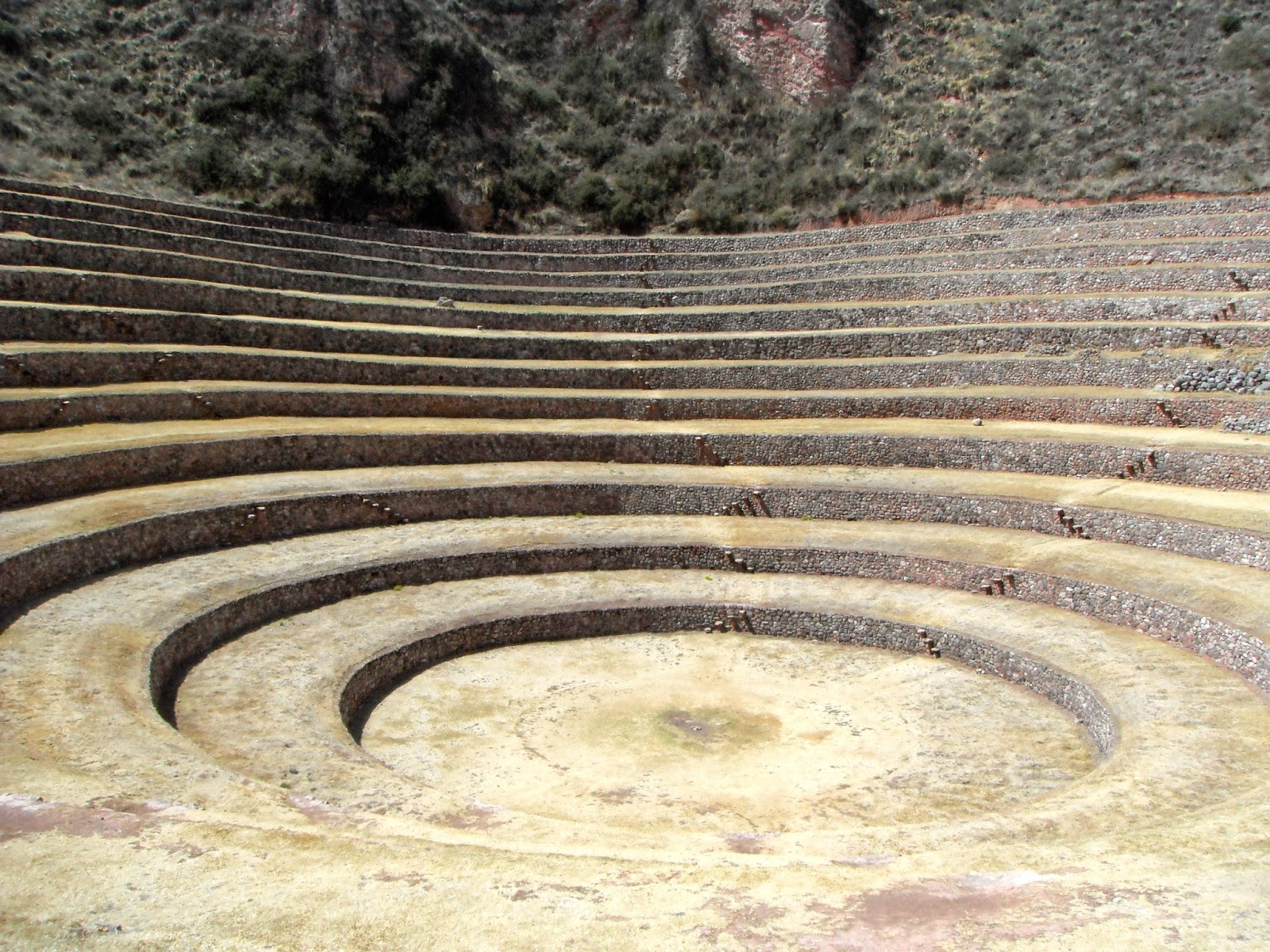 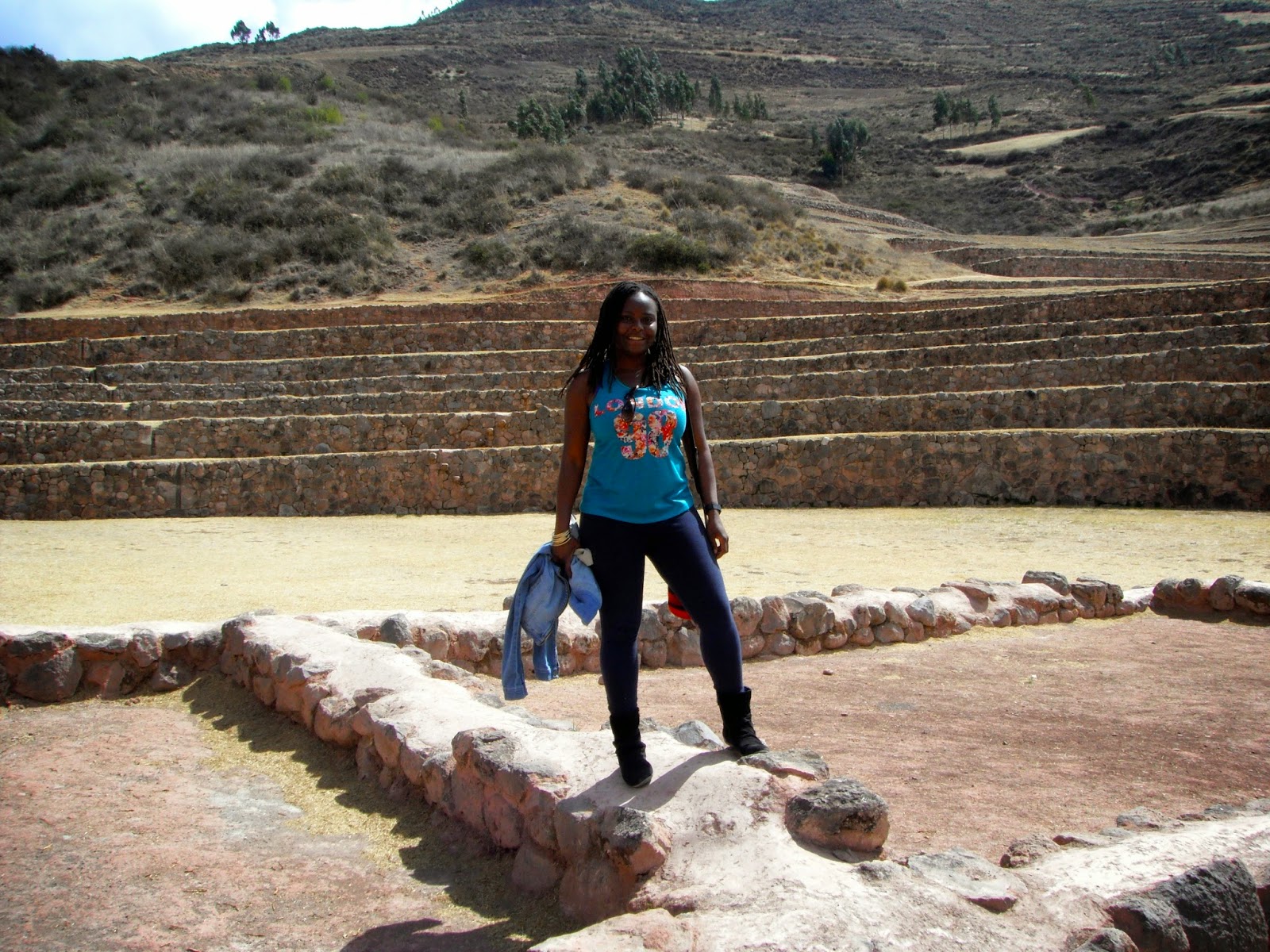 The protrusions you see in the picture below are the steps that the Incas created to descend and ascend from the terraces. 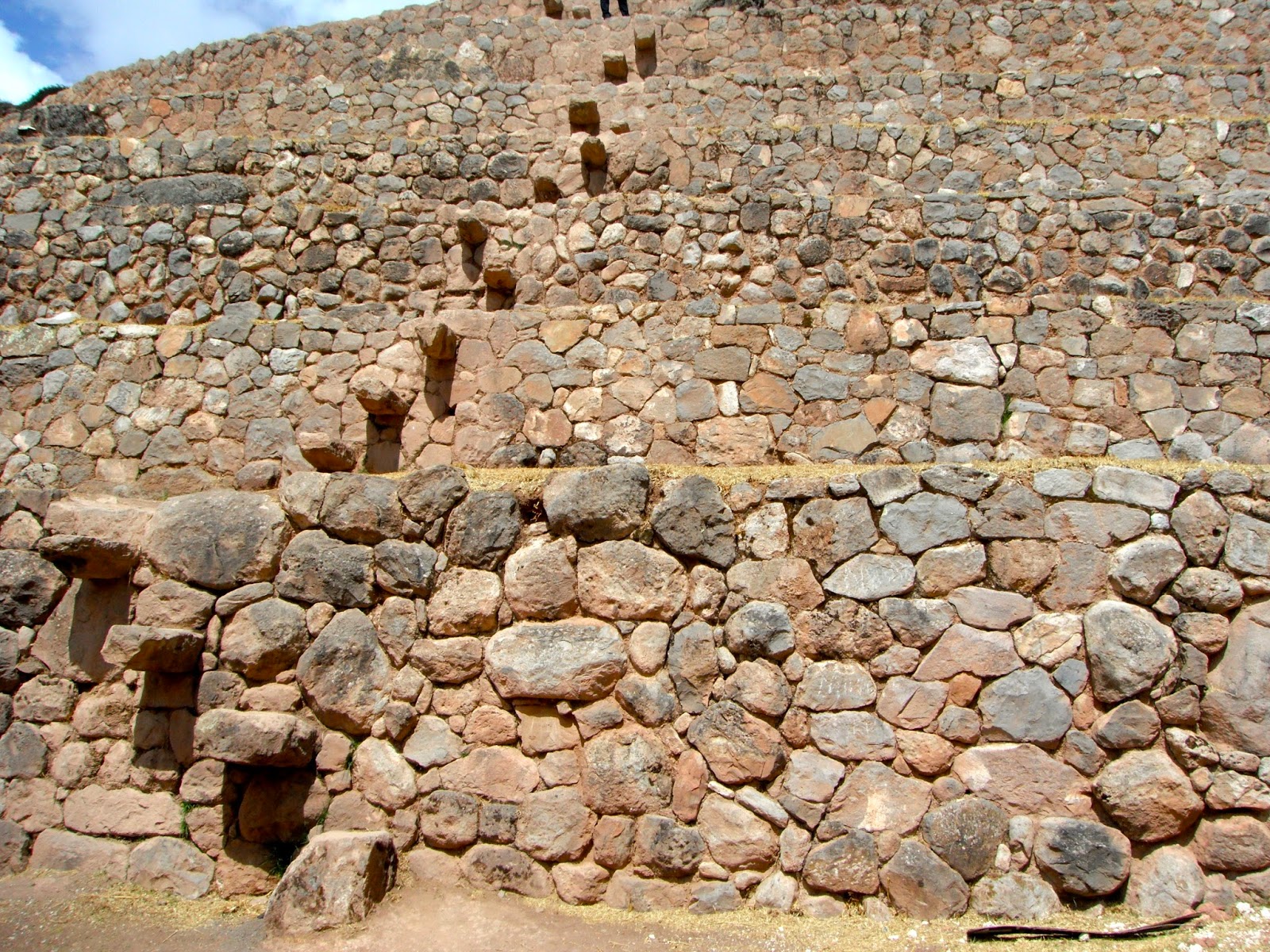 That's it folks, the tour was very interesting and informative and I am glad I did not pass on it because at first I wasn't sure whether it was worth checking out. I definitely learned new things today!

If you want to lose weight just come to Cuzco, I am so serious! some of the steep paths you will have to take could substitute any stair climber in the gym. I got such a work out during the tour from coming up the salt mines and the agricultural terraces. My butt and thighs better be grateful.

I think by the time I leave Peru my ego will be like my butt - big! the compliments I get over here are too much (I am not complaining at all!). In addition to being asked out by random dudes on the streets, I have been given a handwoven bracelet (this dude stopped me on the streets and started chatting me up before making me a bracelet as a gift), my groceries have been carried for me, I have been offered free city tours and invited to hang out..............Le sigh! I am actually enjoying the attention to be honest with you.

Lima and Cuzco are very different from each other. Lima is this modern developed city while Cuzco seems more traditional and a bit rough around the edges. It took me a while but I have to say Cuzco has grown on me.

My impatience will be the death of me one of these fine days. This past week I have had a series of unfortunate events and I have no one to blame but myself. Aaargh! I need to get it together.