Today I finally arrived to my new home in Cusco where I will be living for the next month although that could change depending on how I feel. If I fall in love with this city I may stay longer, who knows.

I took a flight from Lima to Cusco and it was uneventful just the way I like it. When I got to the house where I am renting a room I was welcomed by one of the host's who happens to be British-Nigerian and is hilarious! at first he thought I was from Jamaica because of my accent (I have heard that so many times) so when he found out I was from Kenya he was ecstatic that he had met a fellow African in Cusco of all places, he immediately broke into a strong Nigerian accent saying, "look at me Ooh! don't think I have forgotten my roots even if I speak like a British because I was born in Britain." we both just burst out laughing when he said that because he was trying to be funny, you had to hear the accent to appreciate the humor. I have to say though, the guy seems to have lived an interesting life and has traveled all over it is just so interesting to hear him talk about his experiences.

So this is how international the house I live in is, there is the British-Nigerian guy, the hostess is British, there is an Israeli guy, there is a couple from Romania and Poland then there is a Chinese girl moving in soon. I think I will meet interesting people from this house.

After settling in, my host took me to the neighborhood plaza and showed me places to eat before dashing off to meet with a friend. I had lunch at this cute vegetarian restaurant and after that I decided to walk around the plaza and surrounding streets. I happened to pass by this group of artists who were making hand made jewelry for sale and one of the guys from the group apparently took a liking to me and started chatting me up, he was really sweet and when I told him I had just arrived to Cuzco and was trying to get my bearings he offered to show me around and take me to the mercado where I wanted to buy groceries. I looked around and figured it's during the day and there are a lot of people everywhere so what is he going to do to me anyway? I made sure we stuck to crowded places at all times so I was never totally alone with him.

He ended up showing me some of the main locations in town while telling me a bit of the history, he took me to the mercado and carried all my groceries as we walked around (that's a whole week's worth of shopping and he is the one who volunteered to carry my stuff, how could I say no?). Finally he escorted me back to the house and we parted ways. He is into the art scene and knows a lot about the cultural events taking place in the city so I am set for entertainment. What can I say? my first day in Cuzco was pretty good and I think I will do just fine here.

Without further ado let me share some of the pictures I took today around my new neighborhood. 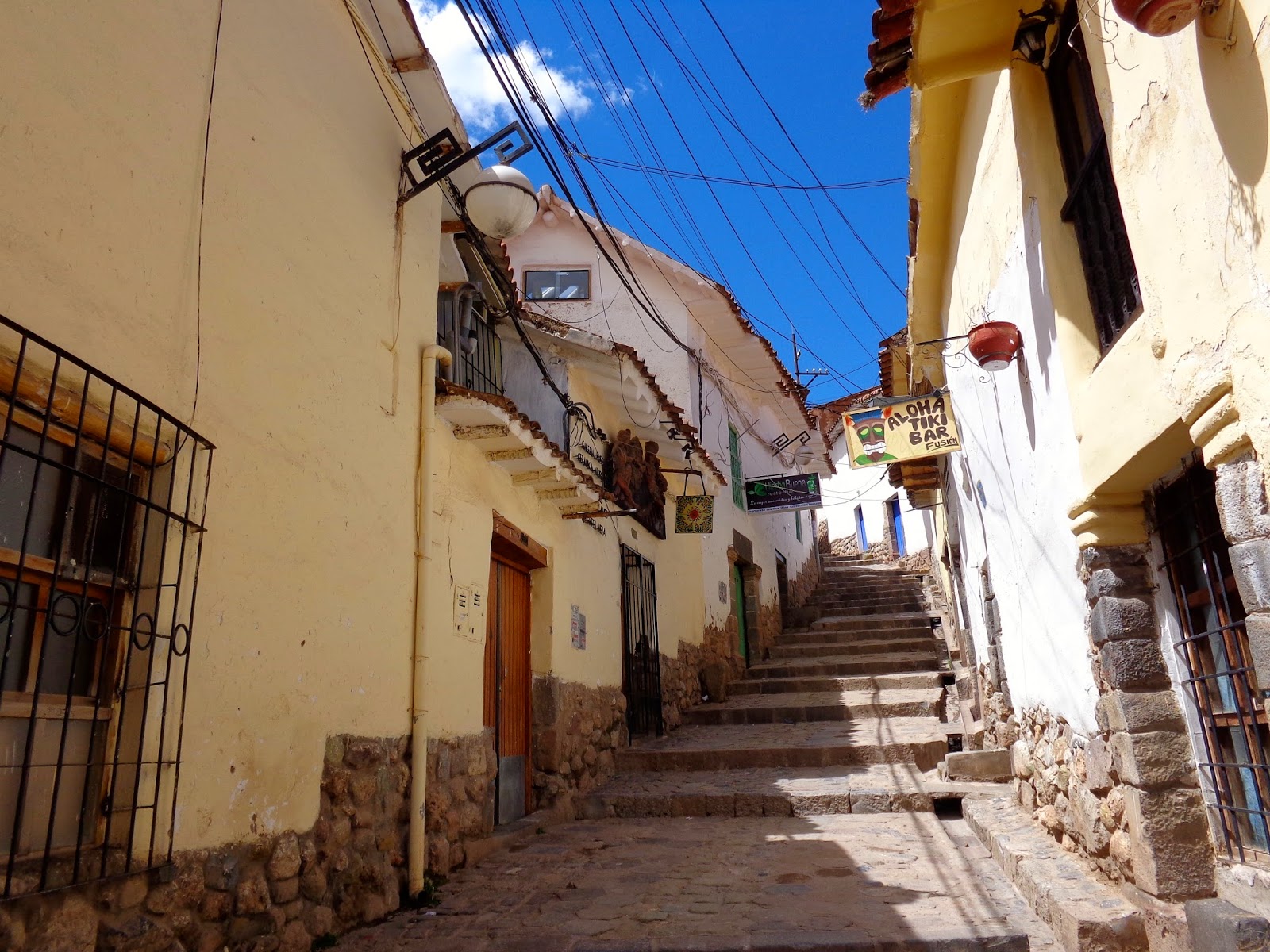 This is the vegetarian restaurant that i had lunch at today. It is so cute and cozy inside plus they were playing some good salsa music so that just enhanced the ambience. I will be going back again for sure. 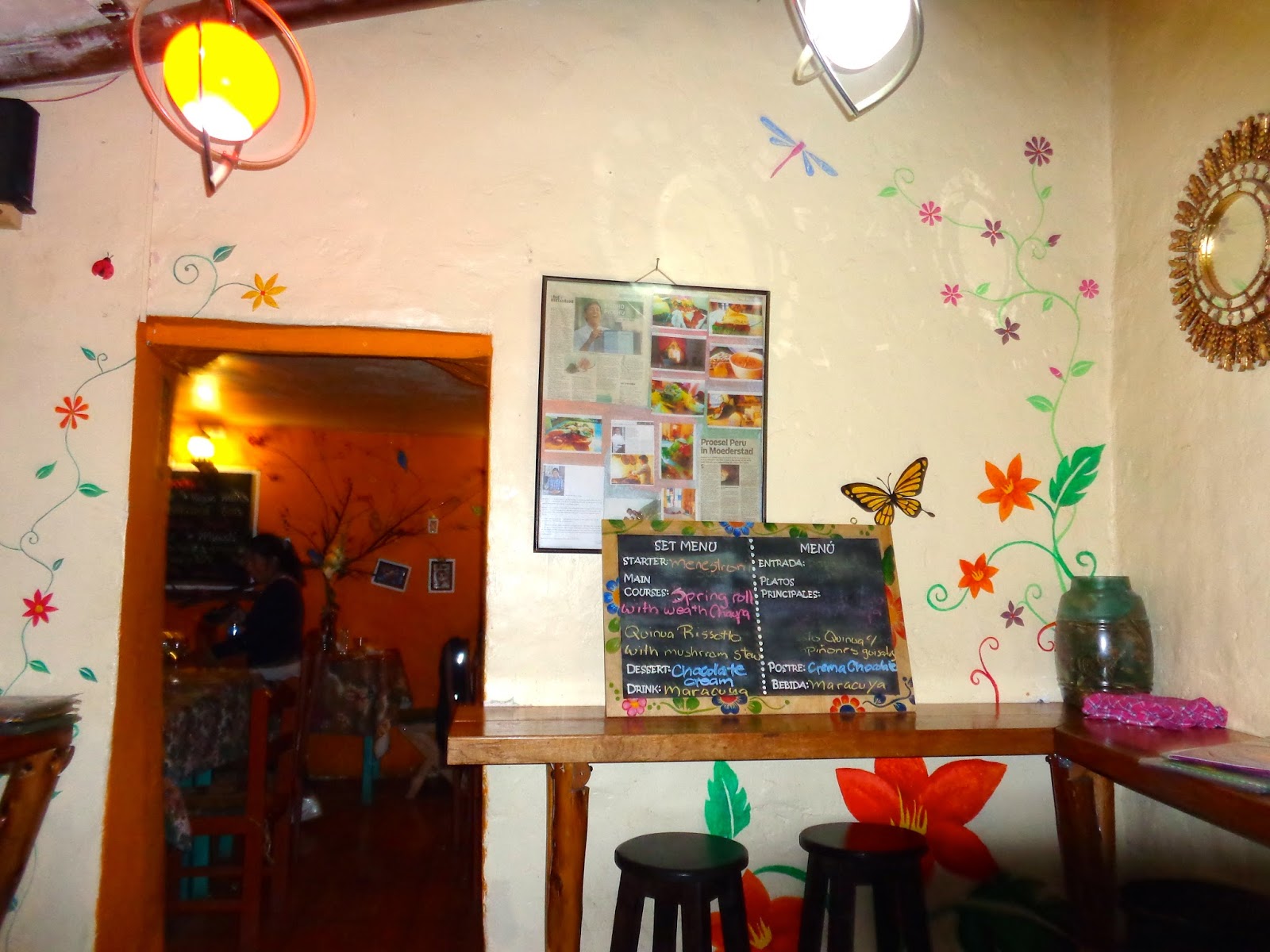 I don't know what's with the color blue but all the houses had blue doors and their window frames were also in blue. Looks pretty, right? 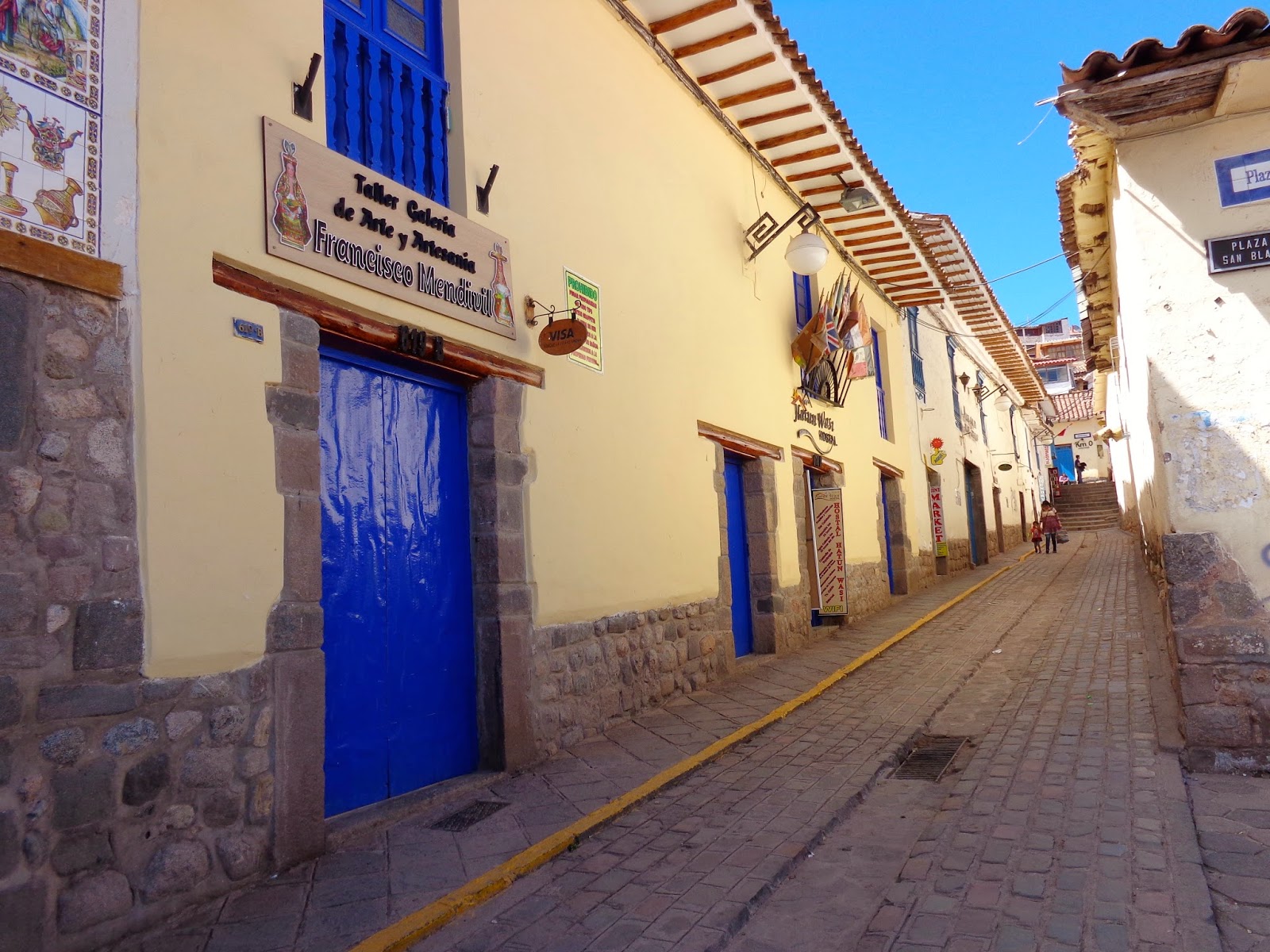 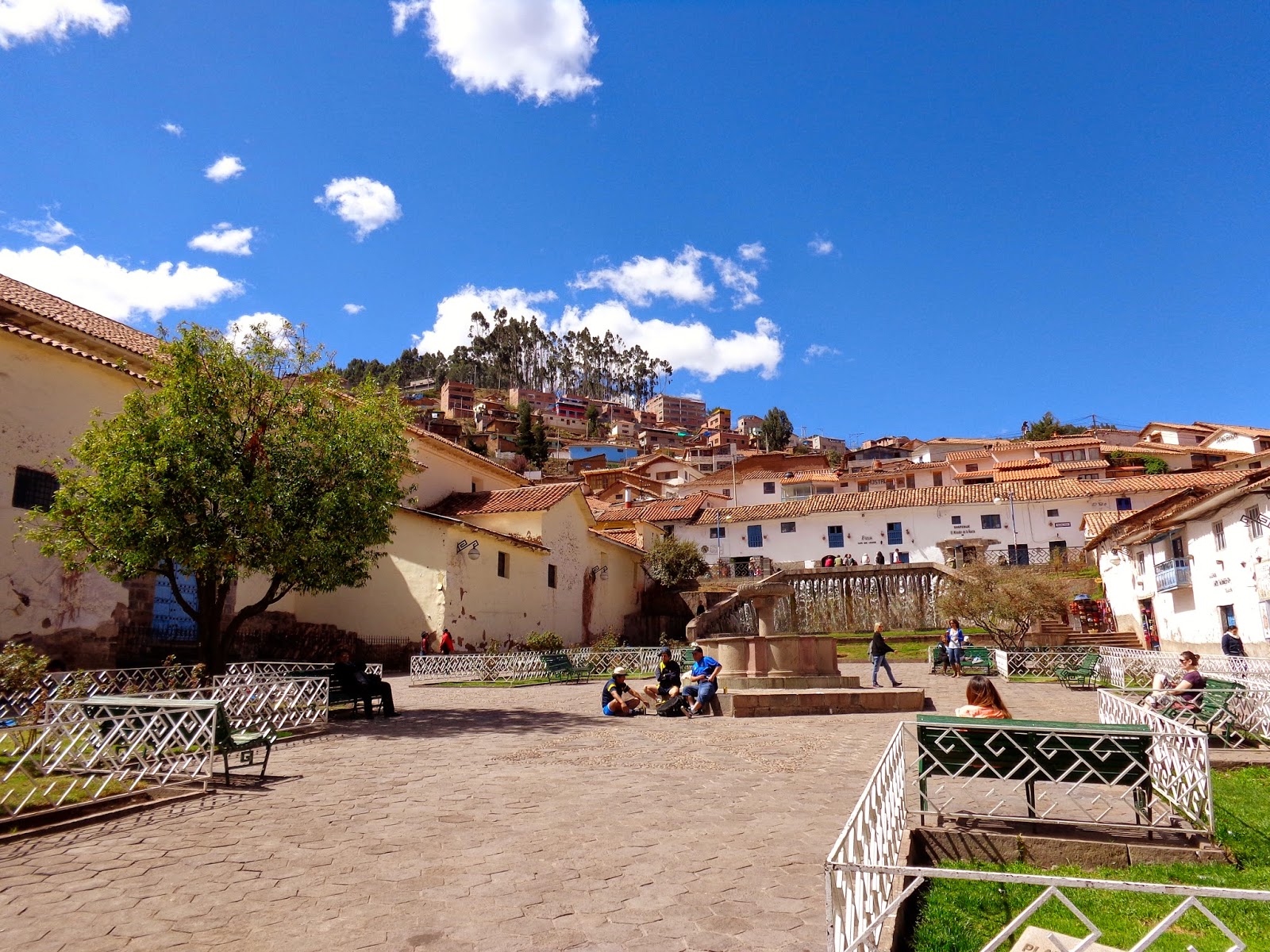 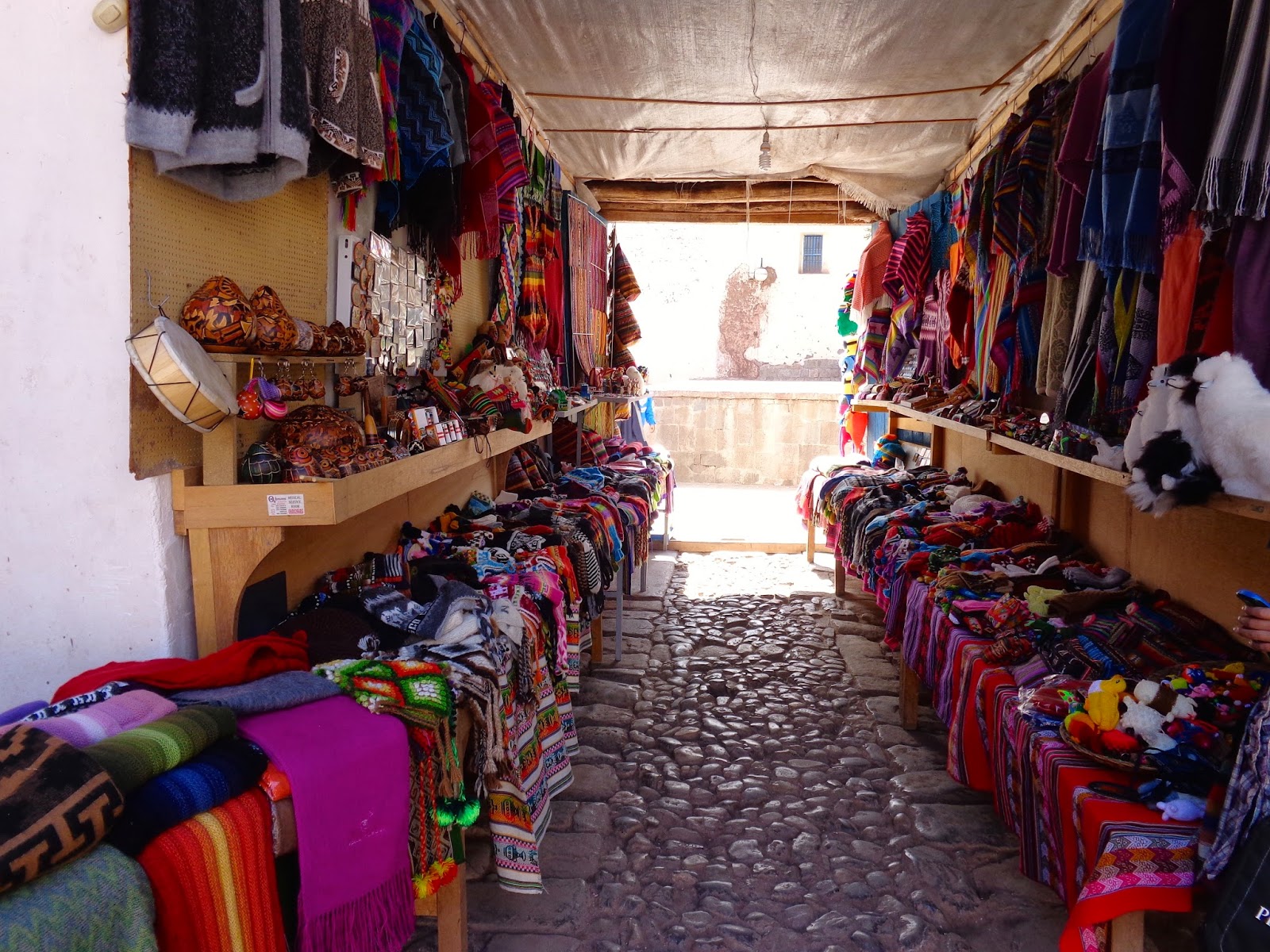 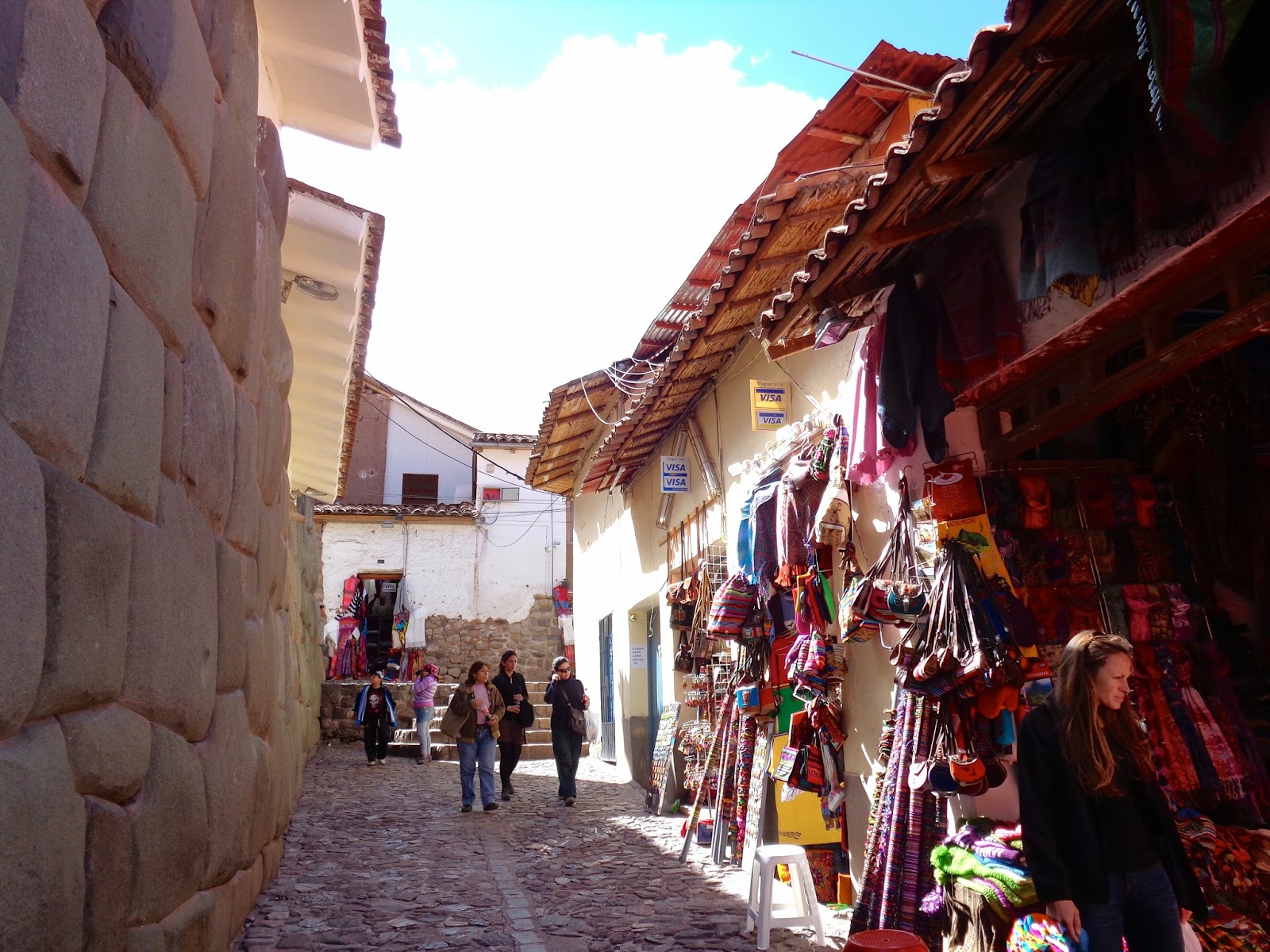 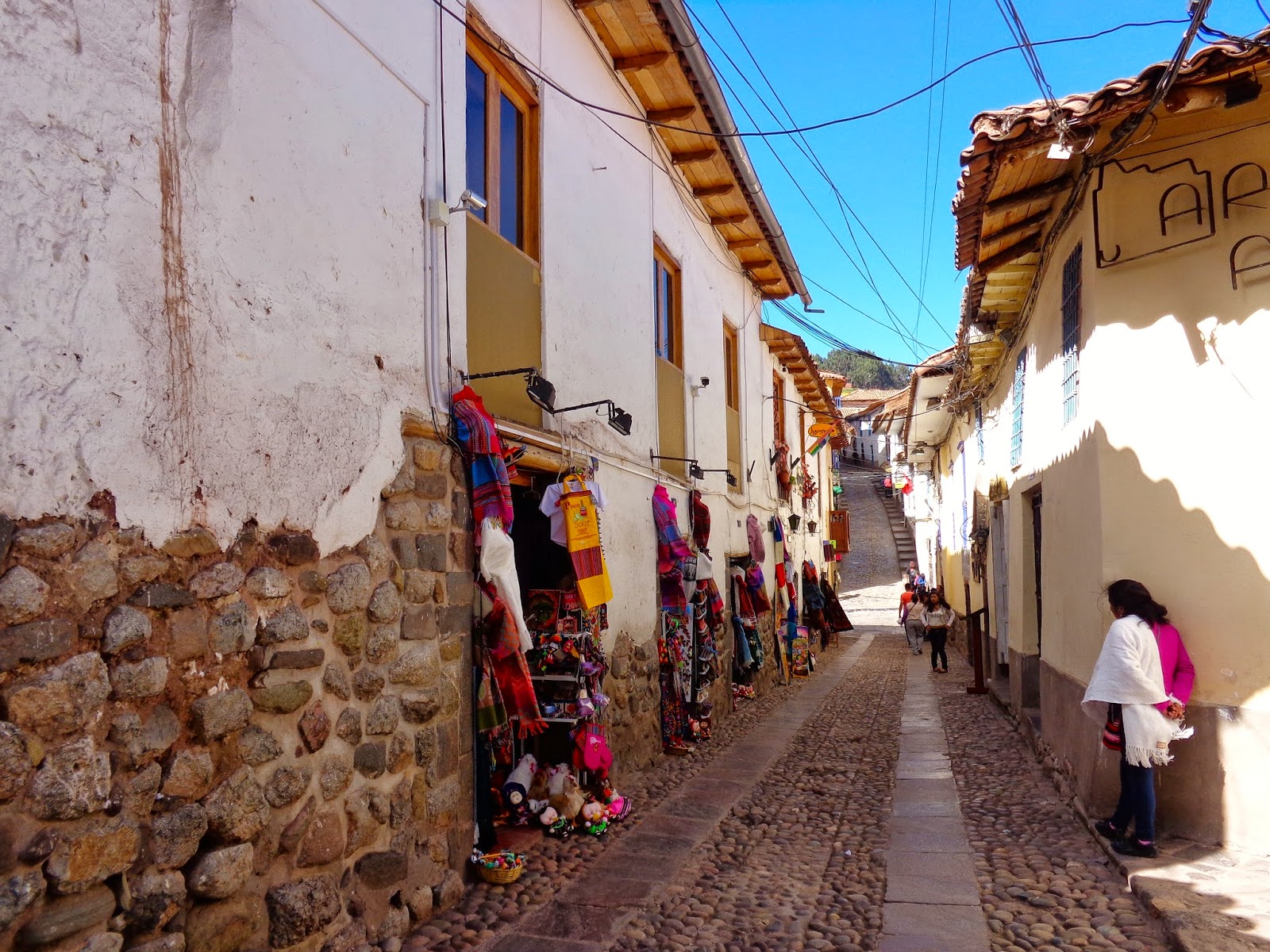 That's the artist I met who showed me around town.

I saw so many processions in the main plaza of the city and it was interesting seeing some of the costumes. 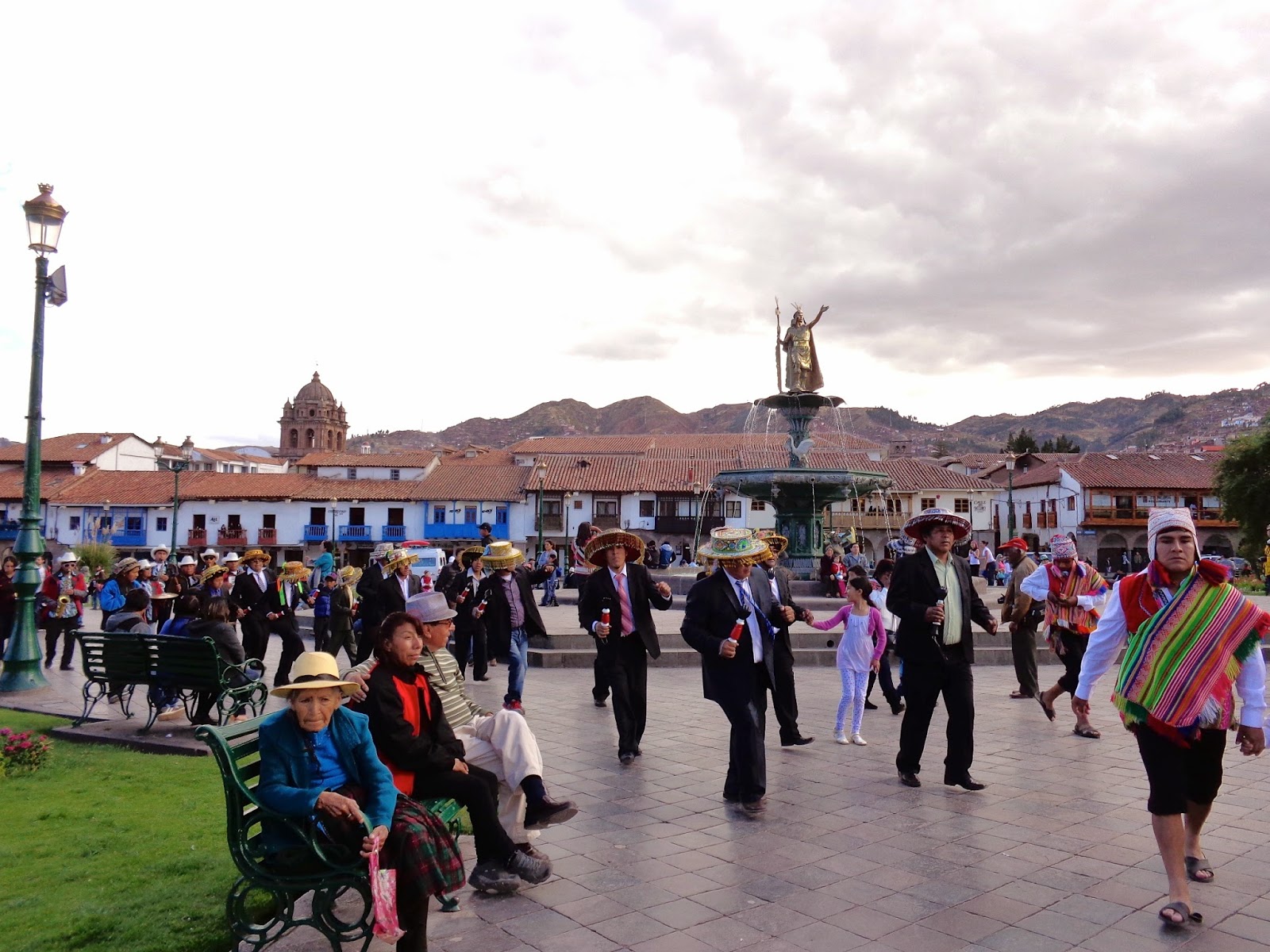 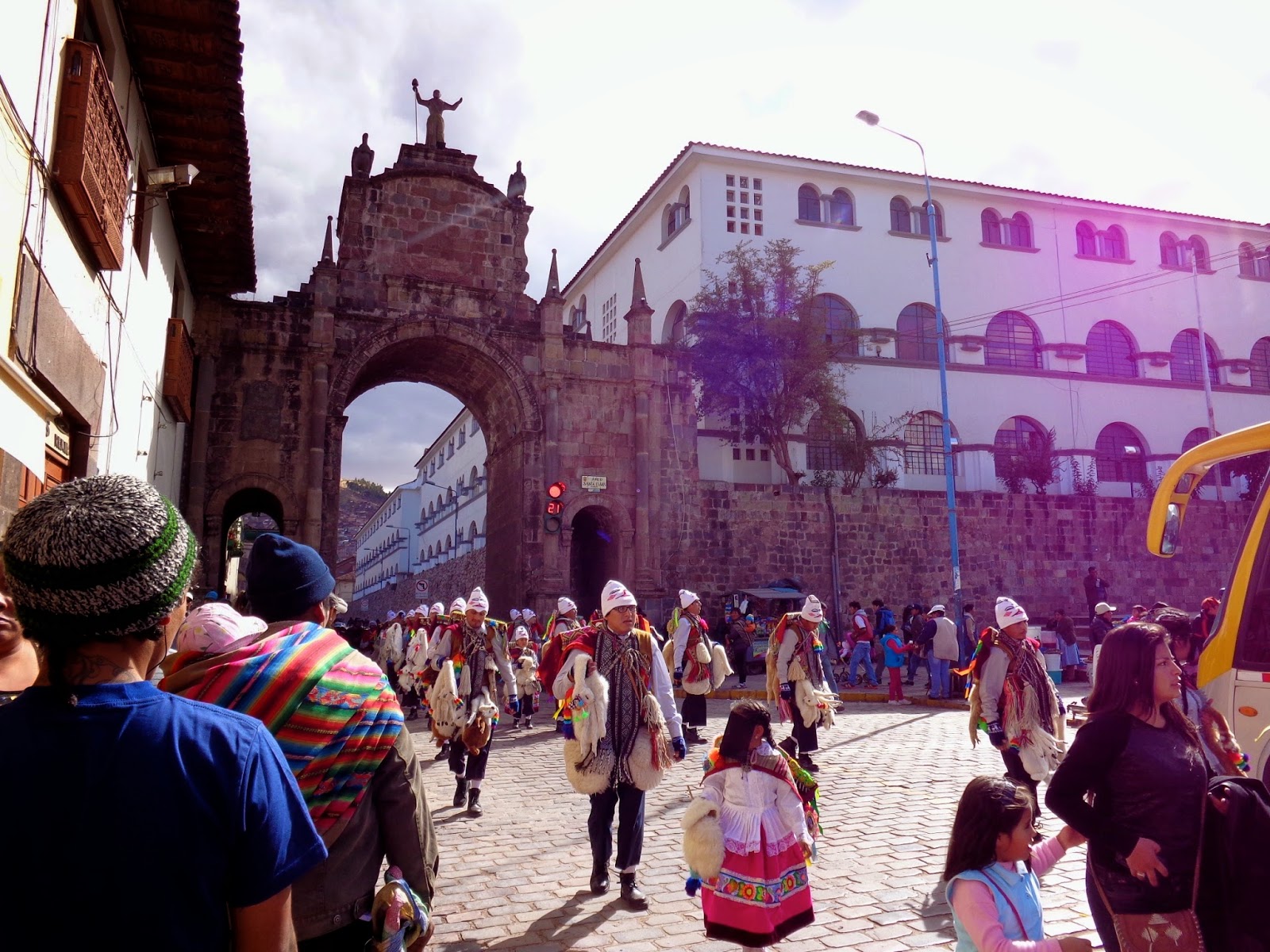 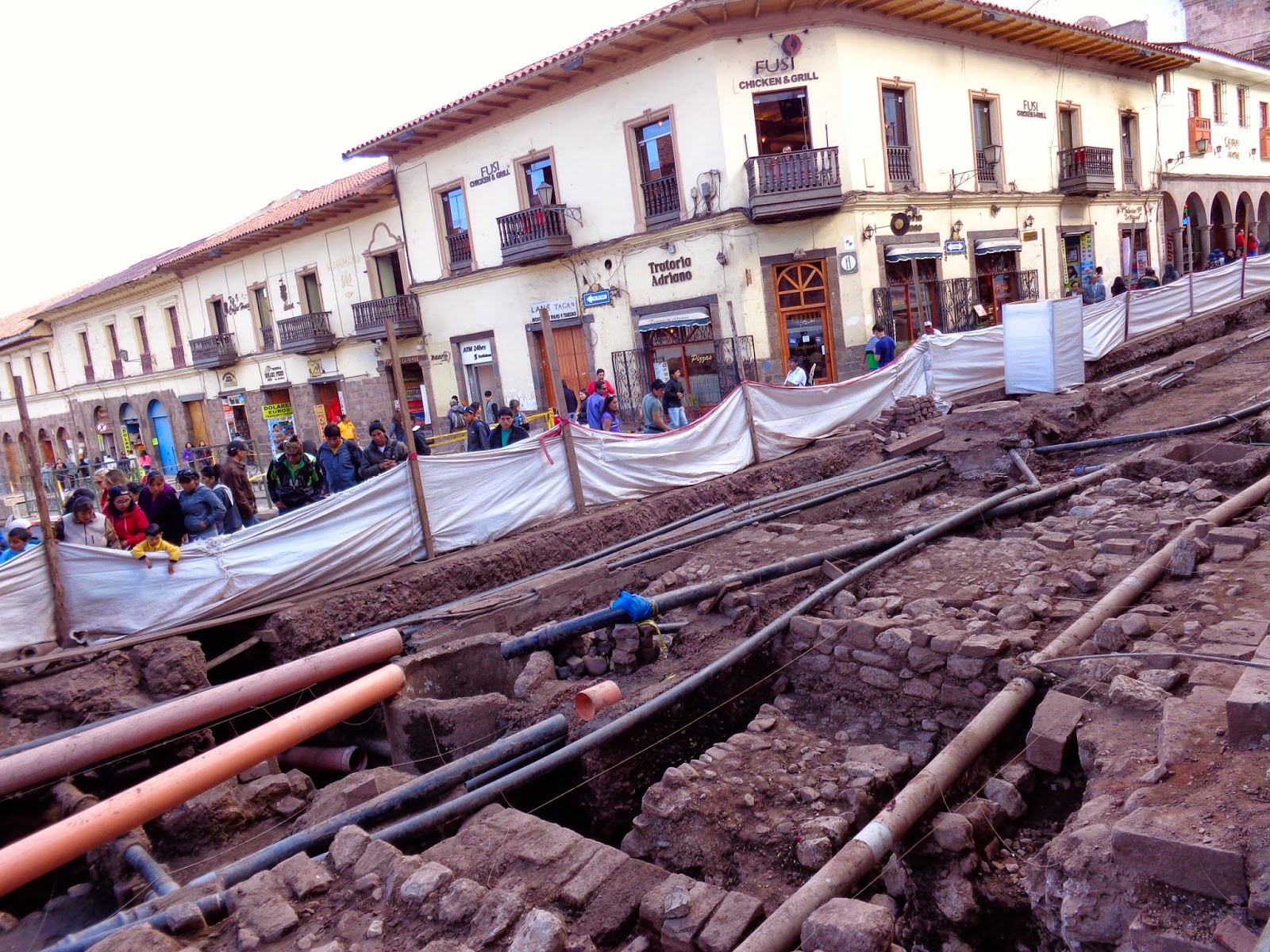 As fate would have it, I end up living in one of those neighborhoods that's situated up on a hill. If you have been reading this blog you know I try to avoid such neighborhoods because of my horrible experience in Guayaquil. These are some stairs leading to the house, I have been assured that the area is very safe but I am not taking any chances, I will not be venturing out at night alone unless I have company. 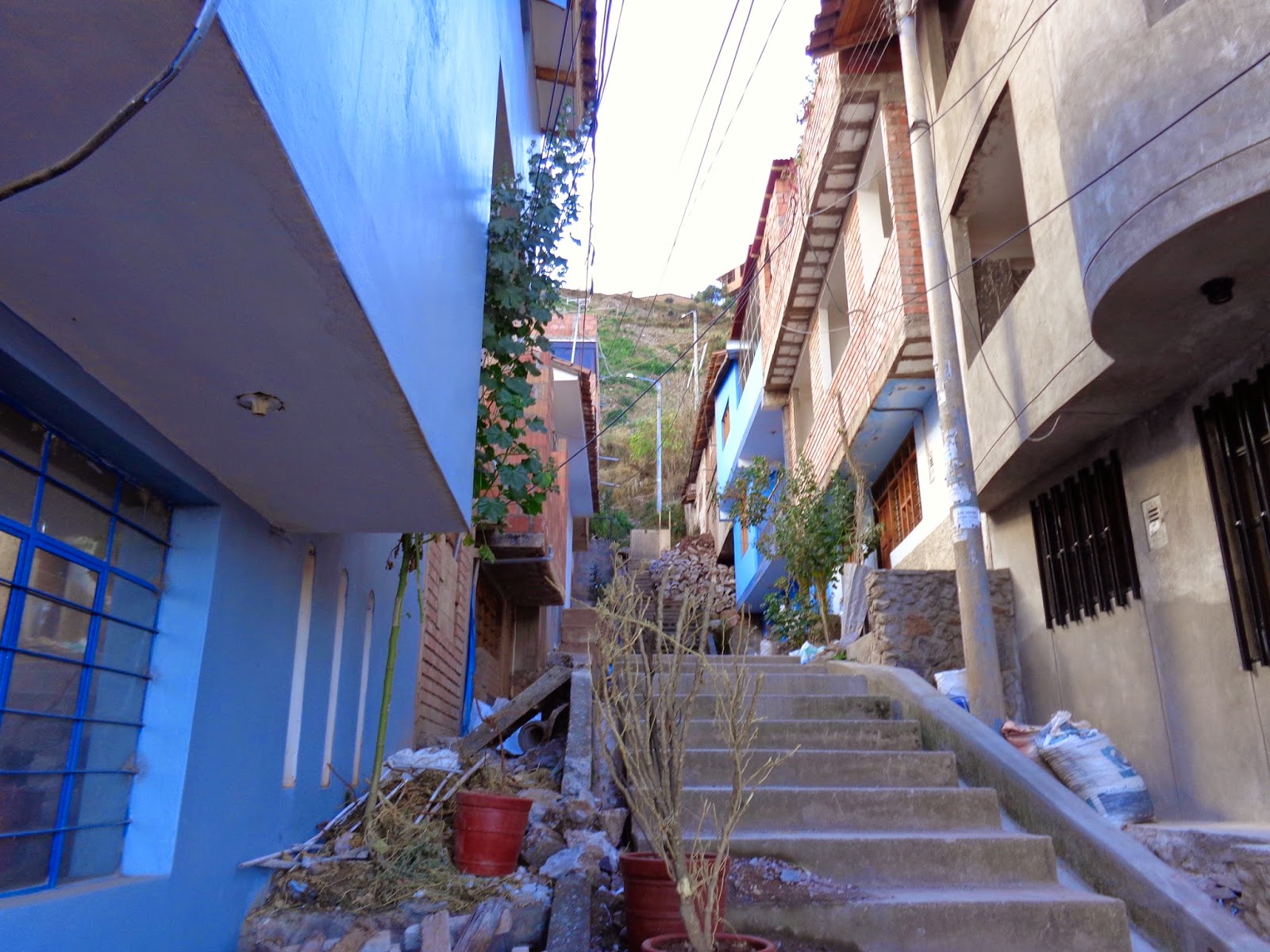 That's it folks, my first day in Cuzco started on a good note so I hope it's an indication of how my stay will be in this new city.

My room is situated in the bottom section of the house and it is so cold. Thank goodness for a heater being provided.

Tomorrow I start my Spanish classes in the morning, I have actually missed taking classes. My Spanish has improved immensely!

I really hope I find a way to use Spanish when I return to the US because I would hate to lose it. You know how languages are, if you don't use them then it's easy to forget. It would be awesome if I got a job that incorporated some Spanish, time to tweak my resume.

This is my second time in Cuzco. I was here two years ago to see Machu Picchu but only spent a week so this time round I hope to see more of the city and surrounding cities as well.

I have to be careful about the sun though, it may not feel like it but it burns more because being at a high altitude means you are closer to the sun. I am stocking up on sun protection!