They say life begins at 40 and I must say today I "began" life on a good note. I decided to celebrate my 40th birthday in Kyoto because it's considered by many as Japan's most beautiful city. Kyoto served as Japan's imperial city for more than a thousand years before the capital was moved to Tokyo and the city holds 17 world heritage sites. Quite impressive right? since my life was "beginning" today I figured it might as well begin in a fabulous place so Kyoto it was.

I begun my day by having a hearty breakfast of champions courtesy of the guesthouse I am staying at. The breakfast was amazing and included 3 courses! I felt like I was having lunch and it all cost only $5. The first course was carrot soup which tasted really delicious, and some green tea. 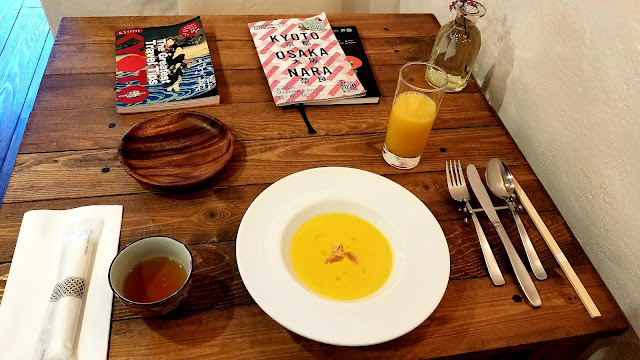 Second course was an array of meat and a chocolate filled bagel, delicious! When I thought I couldn't possible have more room for any more food especially that early in the morning, I was presented with desert. The desert was fruits with yoghurt at the bottom. I finished everything despite being full and I was ready to start my day. 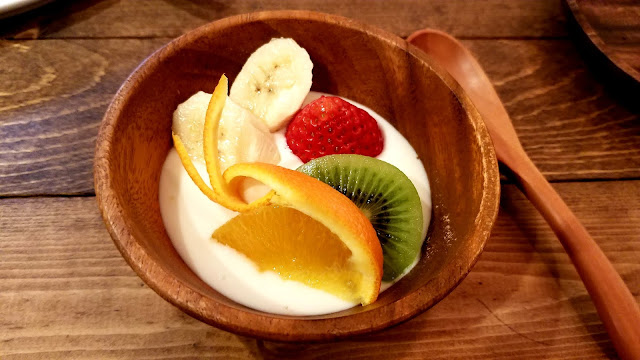 I had booked a city walking tour which was meant to last the whole day basically so I was glad that I had eaten a heavy breakfast because I needed all the energy I could get. I met up with my guide who turned out to be such a cool guy that made the tour fun and very informative, I will briefly highlight some of the stops we made.

Fushimi Inari Shrine - The two main religions in Japan are Shintoism and Budhism, shrines are related to the Shinto belief and temples are related to Buddhism. Fushimi Inari is an important shrine because it's the head shrine with which all other shrines in the country are affiliated. It's also most famous for its colorful torii gates. Torii gates mark the entrance of a shrine and these orange torii gates you see below have names of companies that paid to have them constructed and erected so that they can have luck in business. 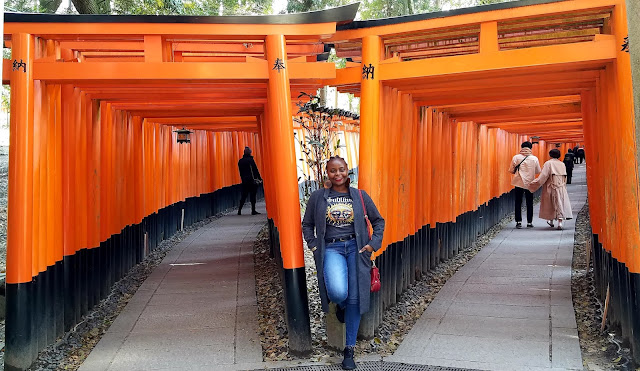 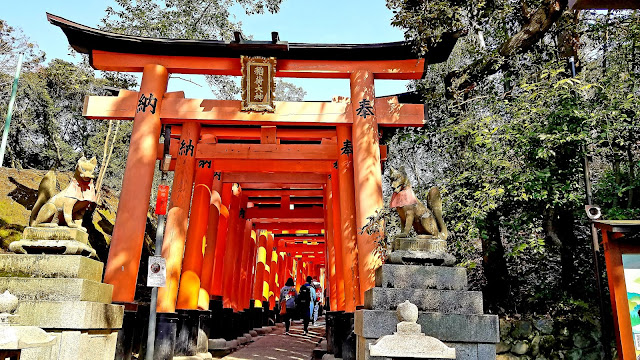 Heian Shrine - Heian is Kyoto's former name and the shrine is dedicated to the first and last emperor of Kyoto. 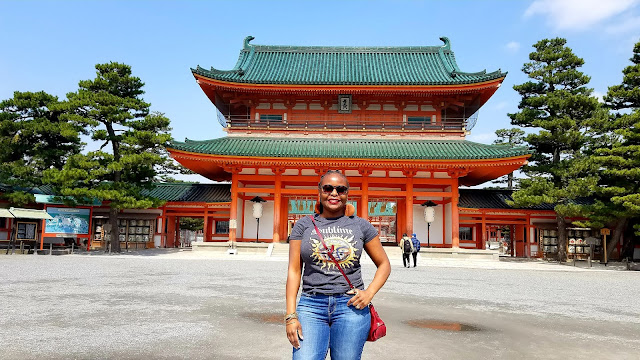 Nanzenji Temple - A zen Buddhist temple that has the highest rank of all Japan's zen temples, the surrounding grounds are very pretty by the way. 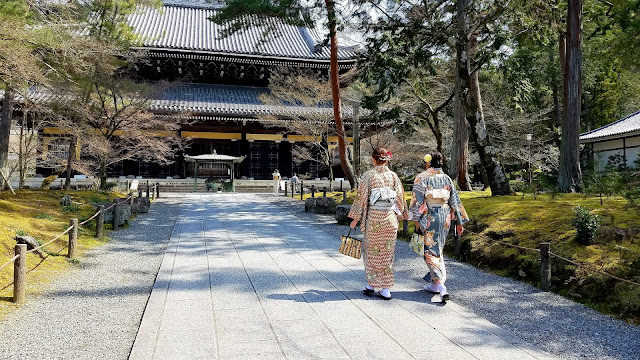 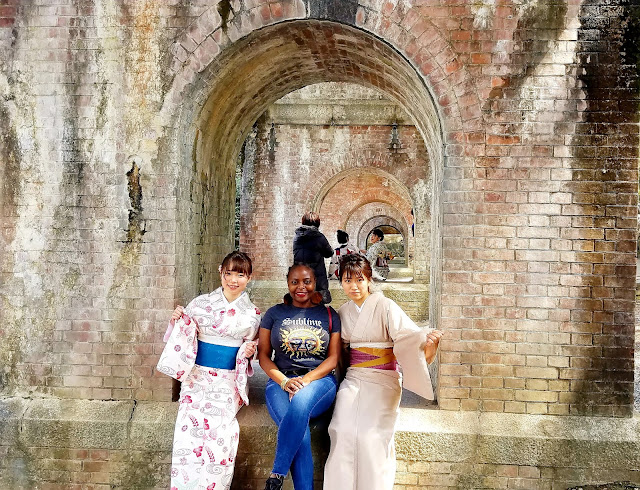 Traditional Tea House - We stopped at a traditional Japanese tea house which had a really beautiful garden surrounding it and where I had the opportunity to drink matcha tea. It's served without sugar so it has a bitter taste but you are provided with a type of sweet which you can use to accompany the tea, it actually helps take away that bitter taste. 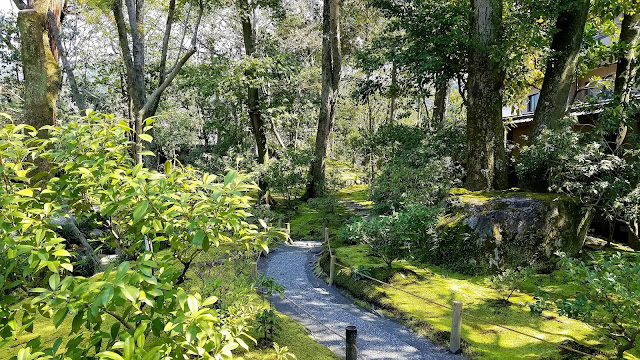 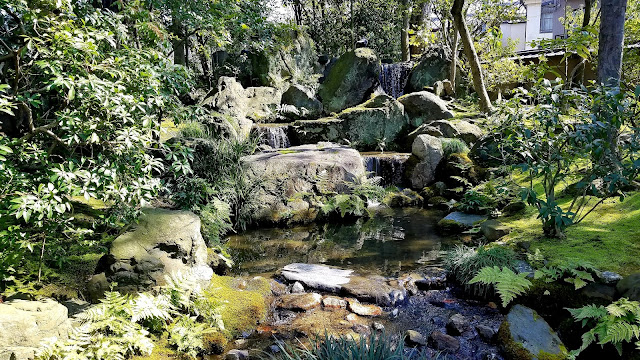 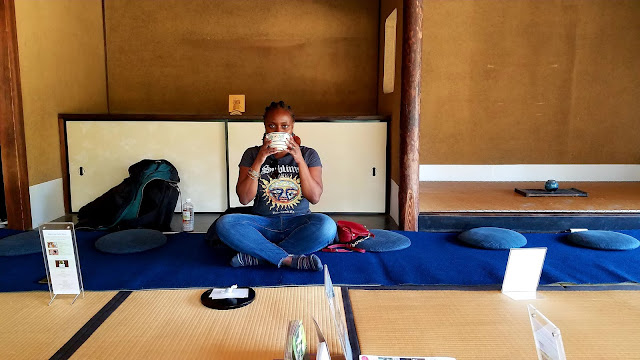 Gion - Kyoto's most famous Geisha district, we didn't spot one though but I was told they mostly come out in the evening. My guide Hiro told me Geishas have their hair held up so that they can show off the nape of their neck which is considered sexy, interesting what different cultures consider sexy. 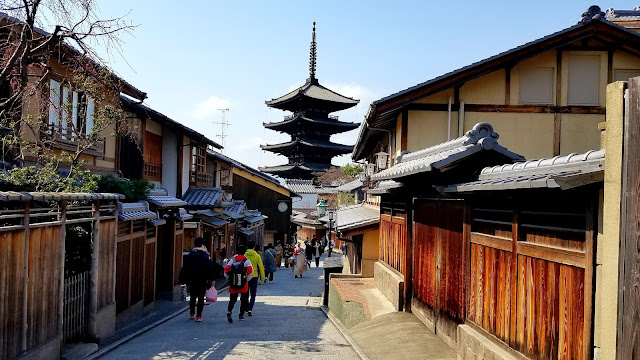 Arashiyama Bamboo Grove - One of Kyoto's top sites, the walking paths are surrounded by tall bamboos that create a really pretty back drop. 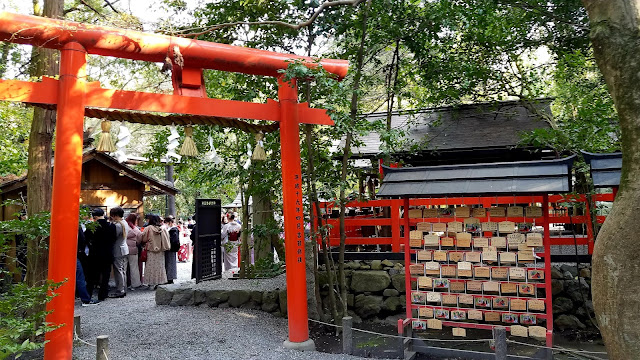 Kimono Forest - Had to see it to believe it, such pretty colors and patterns. I was told at night its even prettier with lights on. 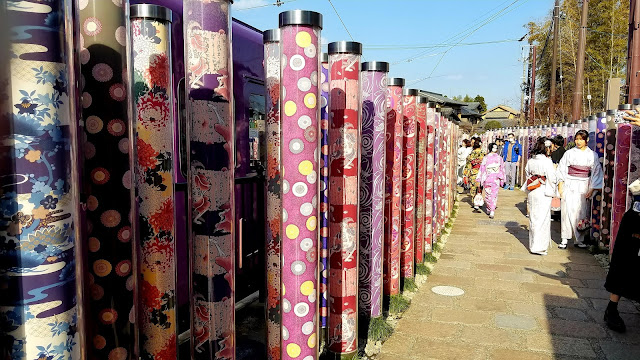 That's it folks! it was quite a day and I had a good time. Here is to turning 40 and beginning a new chapter in life. 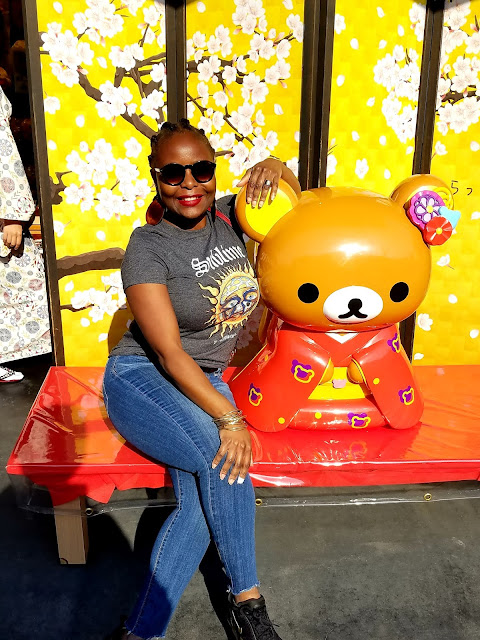 I have to admit that I wasn't too enthused about turning 40 but I am slowly coming around, this milestone birthday has had me reflecting on a lot of things and I have come to these conclusions:
When I was chatting with Hiro my Kyoto guide, he was telling me something and said, "older people in their 40s and 50s." I got a chuckle out of it thinking to myself, "holly crap! I am that "older" person that he is referring to."

It does feel surreal saying that I am 40 years old, and to think there was a time I thought someone in their 30s was so old.

My feet are so sore! even with comfortable shoes, walking around all day does take a toll on your feet.

Remember the toilet in my hotel room in Tokyo that had all these buttons for different functions that I was scared of touching? well, I did end up trying all those buttons and the precision of the bidet  function was on point! how did I survive in this world without a bidet??!!

Hiro the tour guide was telling me that their multi cultural company is looking for someone that speaks Japanese and English. He asked me if I spoke Japanese and I told him I don't.......ya'll!! I was ready to leave it all behind and get me a job in Japan but unfortunately I don't speak Japanese.