I know today is not Sunday but blame my laziness for posting this late, better late than never right? seriously after coming back from Cali I have just been bumming around and haven't had the motivation to do anything but chill. It actually feels like I am taking a lazy holiday, whatever that means since I am technically on some sort of holiday to begin with! okay, so where I'm I going with this again? focus J! focus! Ooh! yeah, easy Sunday morning.

I had mentioned before how everything shuts down on Sundays in Quito and how quiet it gets right? well, turns out I was wrong about this! yes in the newer part of the city it does get very quiet and boring but I never realized that it's the opposite in downtown Quito which is the older part of the city. I actually can't believe I have been in this city for close to 3 months and I just found this out, I should be ashamed of myself.

This past Sunday after too much bumming around the house I decided that man can not live on chilling alone so I found myself in downtown Quito and boy was I surprised by the large crowds. I love busy streets with many people and activities going on because it makes everything seem so alive and I thrive on that, so you can imagine how excited I was to see that. The weather was good, I was feeling energized and to make matters better I bumped into a friend so we ended up hanging out together and having really good conversation while wandering all over downtown without any specific plans.

While wandering around I took time to take a few photos. Look at the crowd of people behind me in the picture below, this was not even the busiest section if you can believe it. 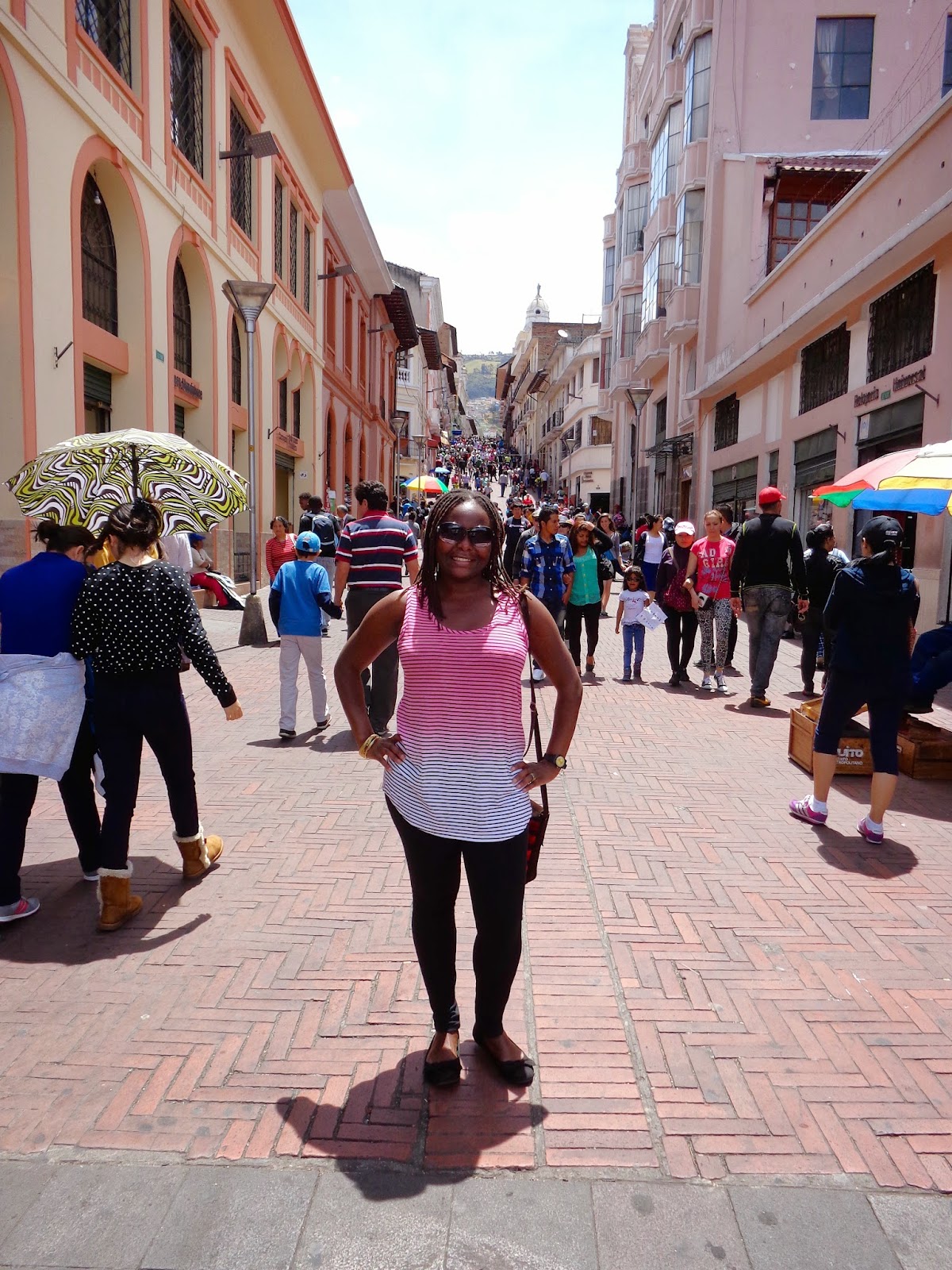 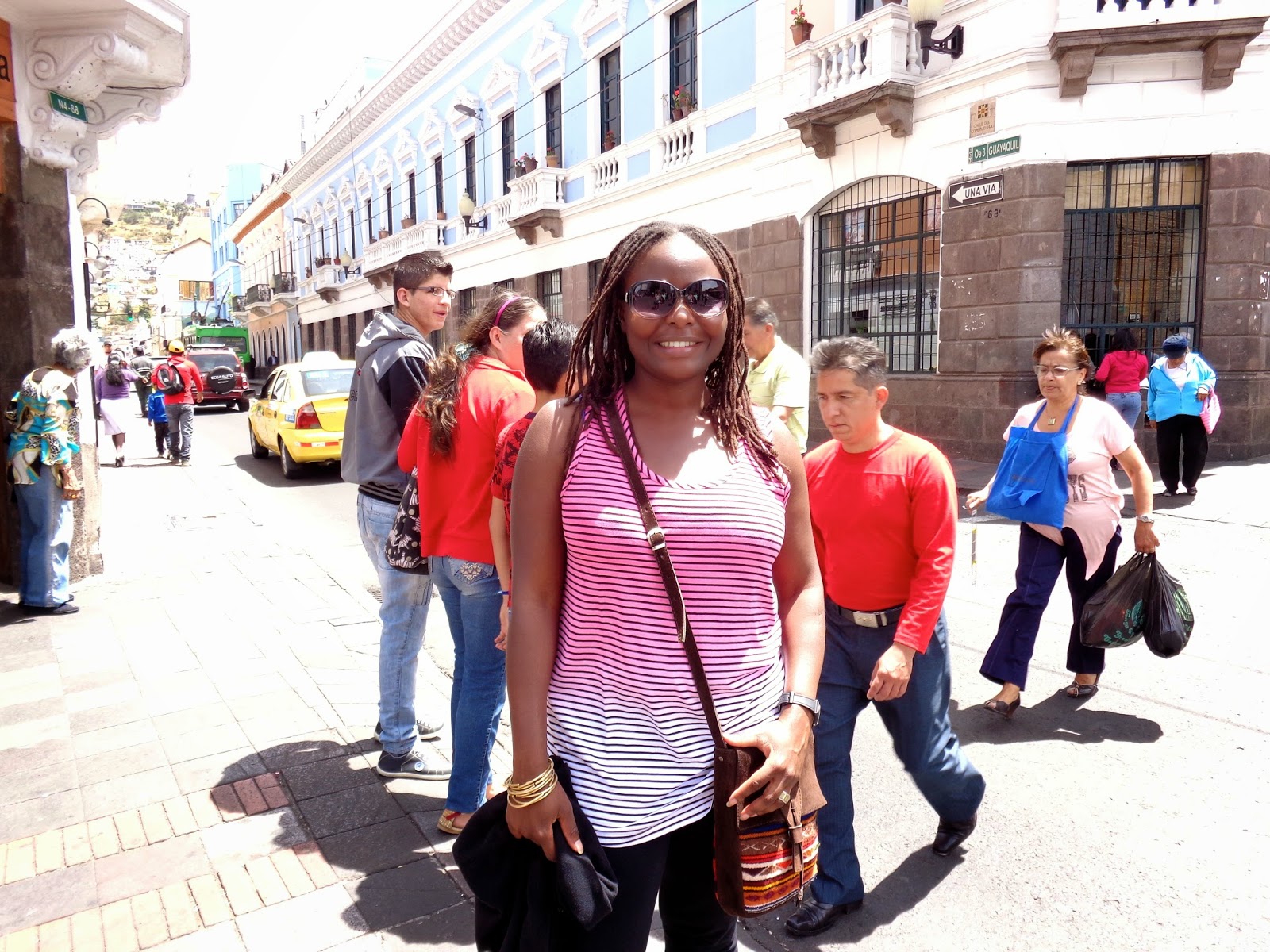 There were some streets that were not so crowded however and it was cool walking along checking out some of the cute little shops and restaurants. This street was one of them. 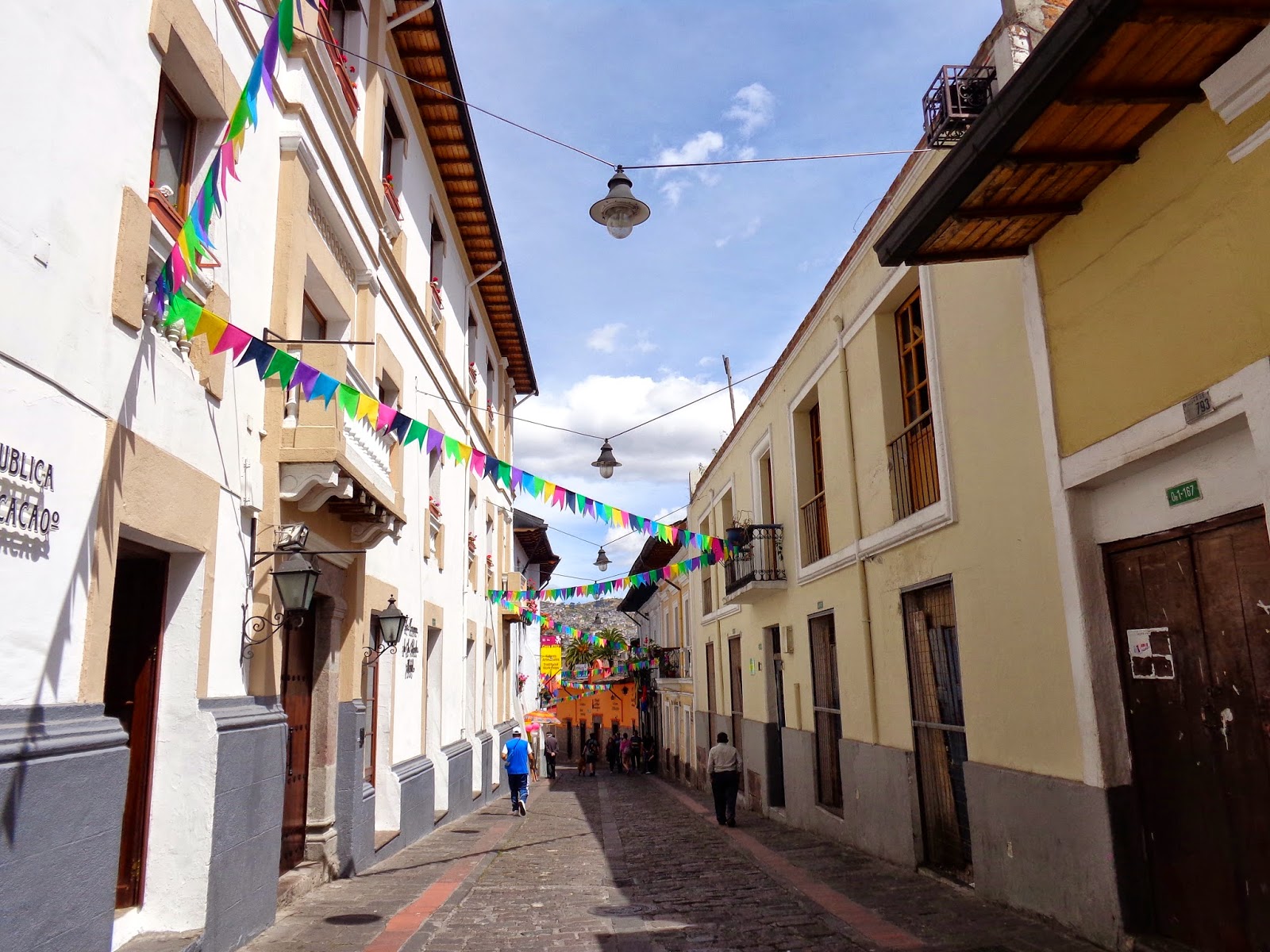 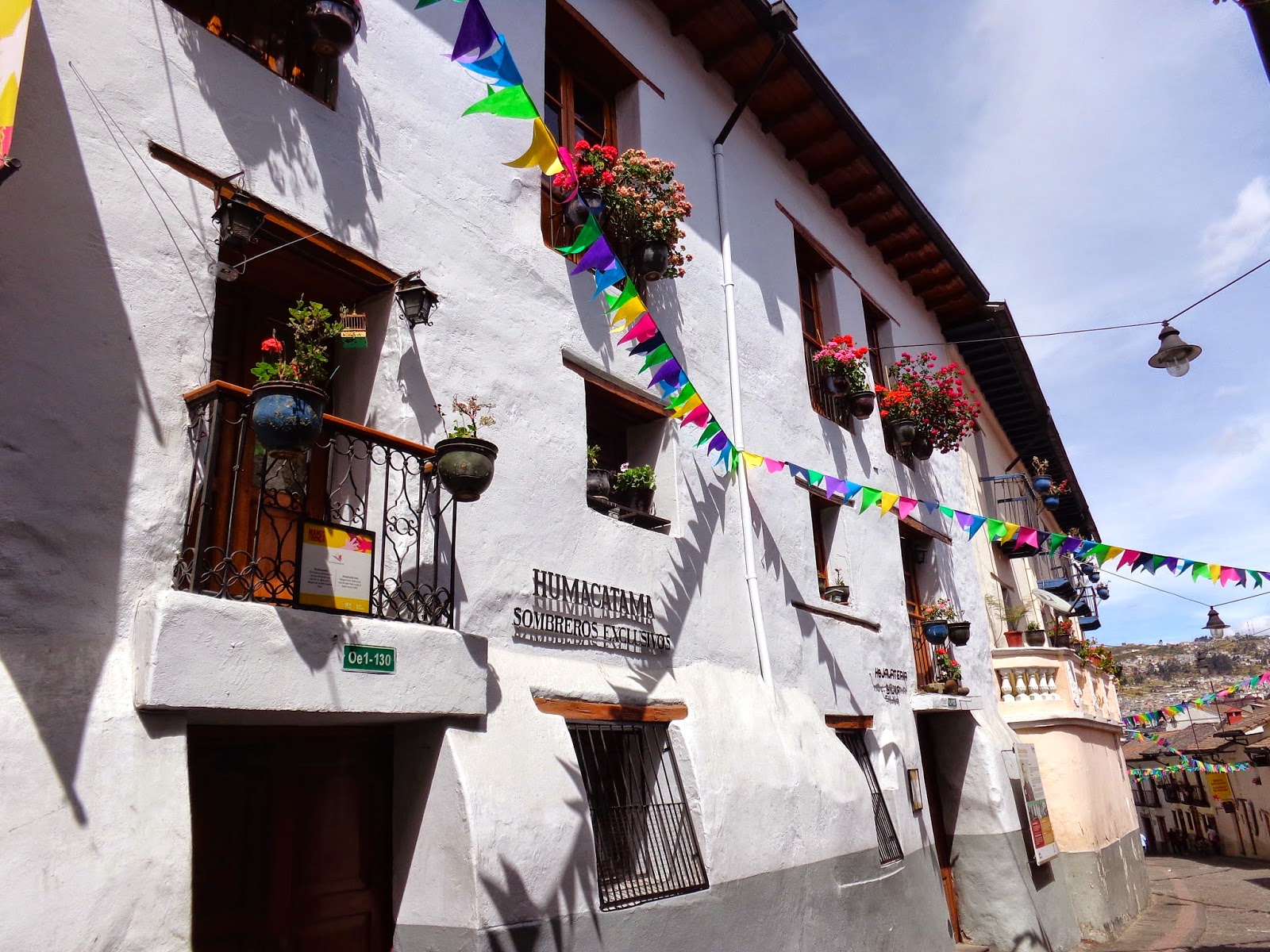 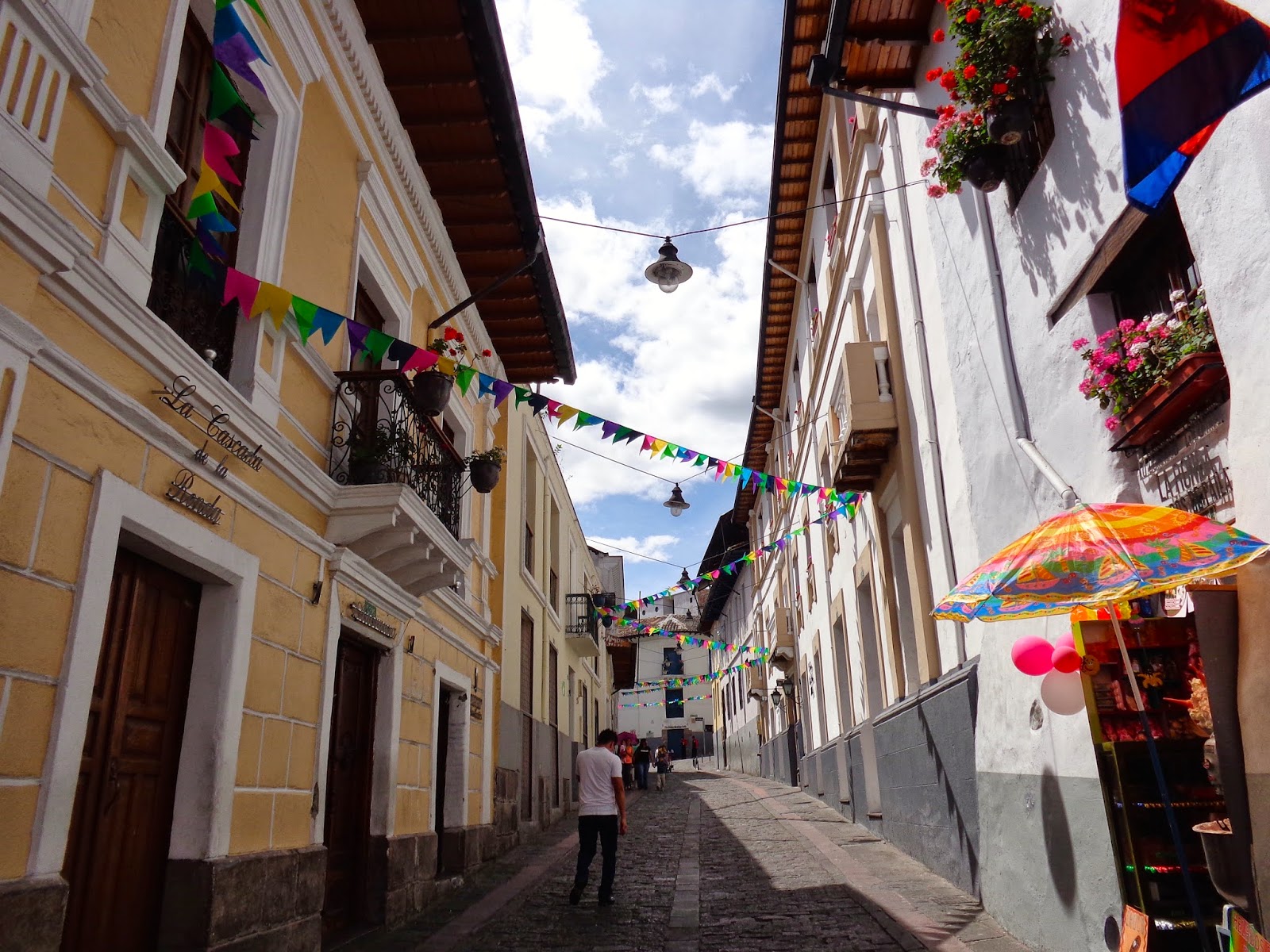 Some of my travel highlights are the people I meet along the way. 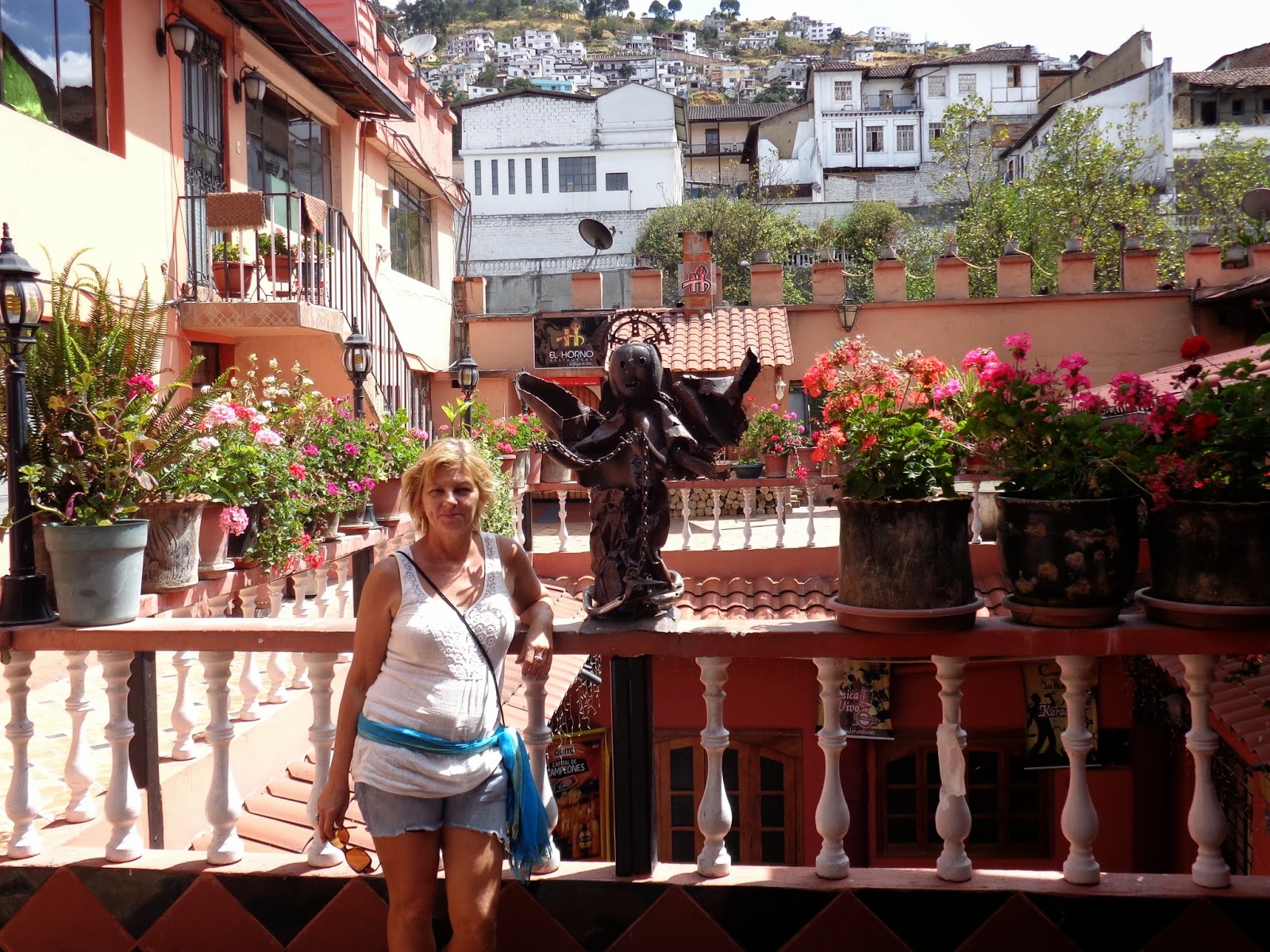 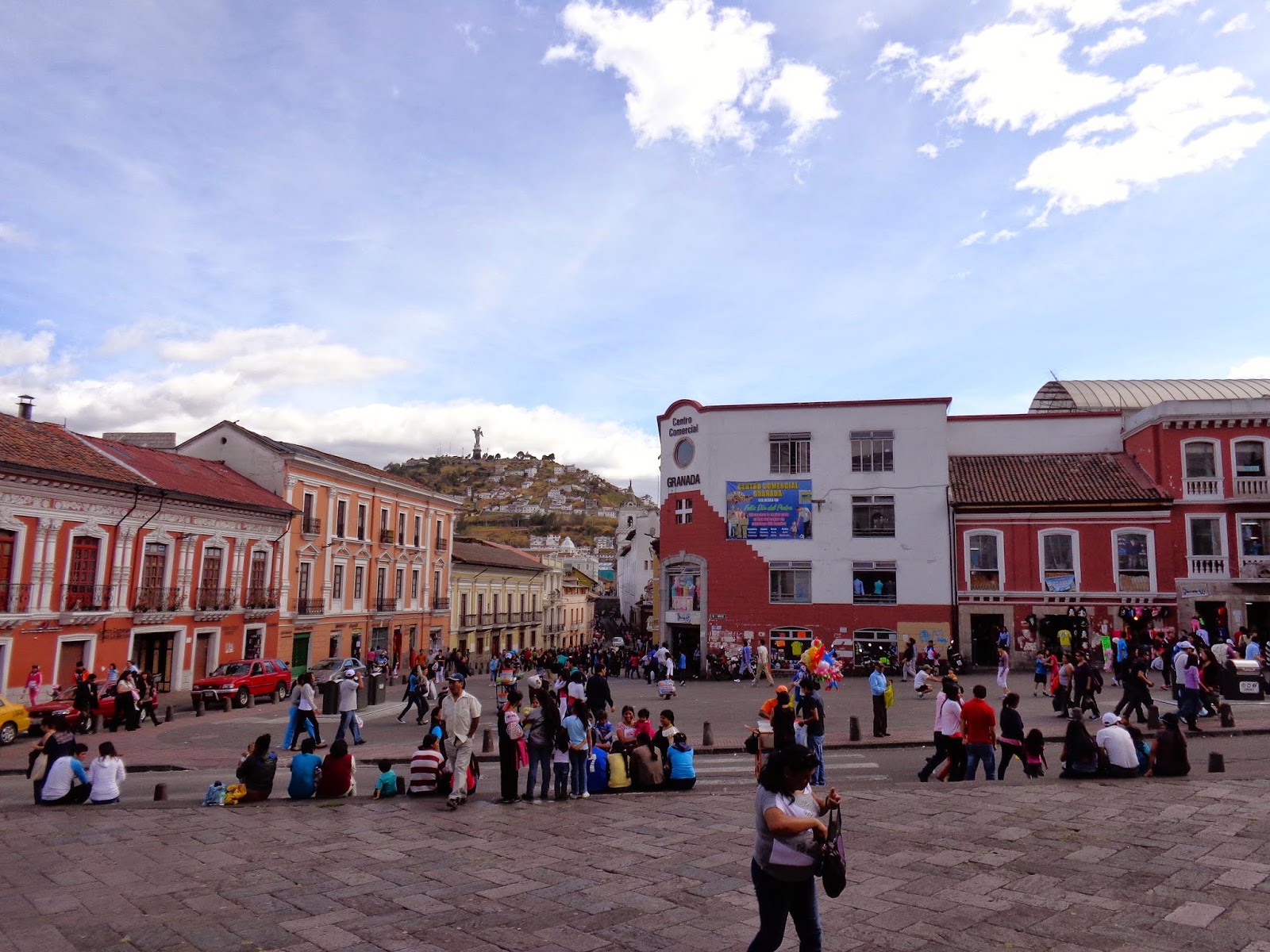 That's it folks, it was an easy relaxing Sunday and walking around the lively downtown area sure beat bumming in the house. Now that I know how fun Sundays can be, I think I will be taking another trip to downtown this coming Sunday.

"I have a husband" you have no idea how useful these words are proving to be during my travels here. I have come across all sorts of men and I have learned the only way to stop some of them with their unwanted advances is to say that I have a husband. This usually changes the tone immediately and they become all respectful and back off. If I ever let on I was single their advances would be persistent bordering on harassment and frankly speaking there are certain situations I would rather avoid. Yesterday I was hanging out with a good friend when she got a text and a call from an unknown number, turns out someone had dialed the wrong number by mistake so the misunderstanding was cleared. A few minutes later she got a call from the same number and this time it was the wife of the guy who owned the phone. The wife started shouting at my friend asking why she was in touch with her husband. My friend tried explaining it was all a misunderstanding but the woman just kept shouting on the other end. Finally my friend said, "Por favor tengo marido!" (please I have a husband) and just like that she was able to shut the woman down. See what I mean? when in Rome do as the Romans do, all societies have their cultural differences so I have learned to adjust accordingly.

Since my ordeal in Guayaquil I have a phobia of any neighborhoods located up on a hill. Actually it only takes the sight of stairs leading to a higher placed neighborhood to have me shaking in panic, I am not even joking. In Cali I had gone to meet a friend for lunch and after we parted ways he directed me to a shortcut that would lead me to my hostel as he rushed off back to work. Of course with my horrible sense of direction I managed to get lost but was able to ask for directions from nearby vendors. I followed their directions until I got to the dreaded stairs that led up to this one neighborhood situated on a hill. I swear my heartbeat doubled and I just froze at the bottom of the stairs. I looked around and there was no one to be seen, I wanted to turn back but this was the only way available to get back on the right path. After mustering enough courage I proceeded to run up those stairs like my life depended on it, any gym instructor would have been proud! when I got to the top I just continued running until I got to the point where I had to go downhill to the main road. I am sure I looked like a mad woman but I was not taking chances.

I was having a discussion with a friend in Cali and the topic switched to racism in Colombia, specifically Cali because that's where he lives and works. He told me something very interesting. He said that people will be quick to tell you there is no racism and will point out that everyone has equal opportunities regardless of race. In the universities you will see all shades of color within the student population, that is until you observe the work force. All over a sudden you realize there is something missing. The diversity you saw in the universities is not represented in the work force especially in certain sectors, so what happened to these students? they graduated alright but why are they not included in the workforce? see where this is going? things that make you go hmmm?
- August 19, 2014