As-salaam Alaykum! I am currently in Marrakech, Morocco and pretty excited to explore the city. As with many other trips that I have written about here, Morocco has been on my radar for a while! I had actually planned on visiting the country next year for my birthday but there was some change of plans so here I am.

I arrived in Marrakech this evening and once I was settled at the Riad (traditional Moroccan house) that I am staying in, I wasted no time in doing some exploring to familiarize myself with my surroundings.  Actually, Yassin the guy who works at the Riad was kind enough to help me with directions and even volunteered his time to take me to the main square Jemaa el Fnaa and show me which restaurants to eat at, where to convert my money to the local currency, what common scams targeting tourists to watch out for and the places to avoid. After giving me well explained directions on how to get back to the Riad, I was left to explore the surrounding areas by myself.

I was hungry and hadn't eaten the whole day so I made my way to one of the restaurants that had been recommended, Snack Grand Atlas. It actually has pretty good reviews and I got to enjoy a 3 course meal for less than $10 which was more than reasonable in my opinion. 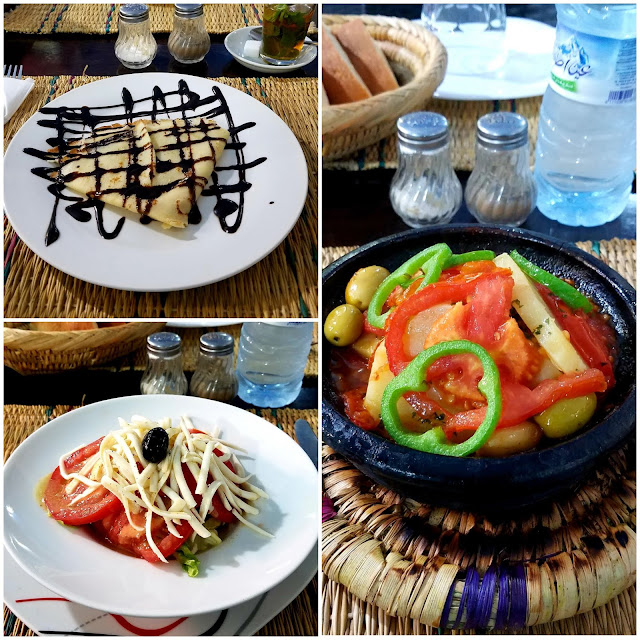 After my meal I decided to wander a little bit around the square before heading back to the Riad since it was getting dark and I did not want to be outside late into the night. Jemaa el Fnaa comes alive in the evening with all kinds of street performances so it was pretty crowded although it's hard to tell in the picture below. 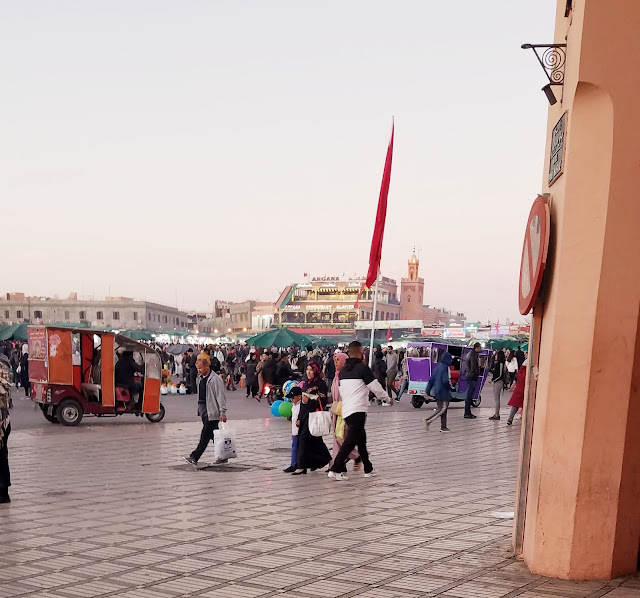 As usual I got lost trying to make my way back to the riad due to my bad sense of direction, the streets in the old part of Marrakech are narrow and can be so confusing. I thought I had all my landmarks figured out but trying to make my way back, it seemed like each street resembled the last one that I had just emerged from. Thankfully, I was able to find my way back after getting instructions from this one shopkeeper that I approached. Happiness can not describe the feeling I had once I got to this street which leads to my Riad..........it's the little things. 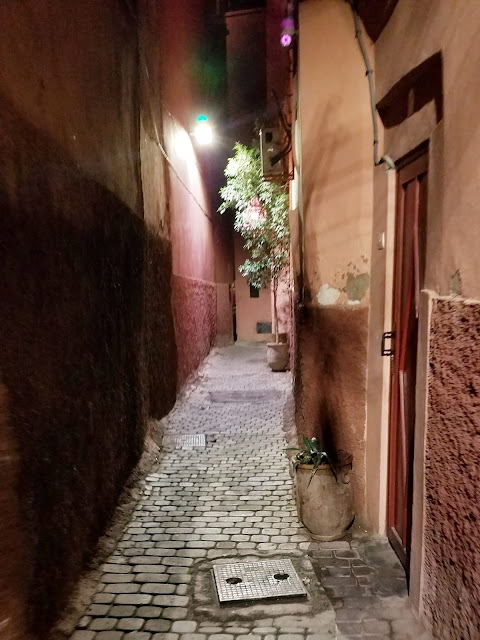 That's it for now, I am tired and the internet is super slow so I better just stop here. Tomorrow will be a much better day as I will have the whole day to explore and take pictures galore so check back in.

These are the warnings I got from Yassin: at Jemaa el Fnaa avoid taking photos of animals because the owners can harass you for payment, if the women who do henna tattoos at the square reach for your hand to "show" you a sample of a henna tattoo, don't fall for it because you will get charged plus he said the henna they use is mixed with other chemicals and is not pure henna that is traditionally used, avoid anyone offering to show you around because you will be tricked into paying them, avoid eating the street food at the square unless you want to spend your vacation expelling your whole gut in the toilet.

Bottom line, there is no free service in Marrakech............Yassin's words, not mine. Actually I looked like a kid as he was running through the list of warnings and I kept nodding my head up and down in rapt attention, hilarious! I got lucky that the shopkeeper I approached for directions wasn't all about hustling to get me to buy stuff from his shop and was genuinely willing to help me out.

I have been informed that Marrakech is pretty safe so I shouldn't be too worried about walking around alone especially at night, I don't plan to stay out at night but it's good to know.

I just love the colors at the souk (market place). Jemaa el Fnaa is surrounded by a big souk with so many shops selling the cutest stuff you can imagine. Its a bit overwhelming because every step you take you encounter something even more prettier so its hard to even know what to get. I am definitely leaving here with some cool souvenirs.

Internet here is pretty slow, maybe it's just specific to the Riad that I am staying in.