Today being my last full day in Morocco, I decided to take a day trip from Fes to Chefchaouen. Chefchaouen is situated in the Riff mountains of northwest Morocco. The city was founded in 1471 and served as a base for the Berber tribes to restrain the invasion of the Portuguese from Ceuta, a city at the north coast of Africa. The city grew from the arrival of Muslim and Jewish exiles from Spain and was closed off to foreigners especially Christians, up until the Spanish occupation in 1920. Today the city is popular with tourists and it's distinctive blue colored buildings in the Medina make it so picturesque.

I have tried finding out why the city is painted blue but no source is quite sure of the answer. All I can tell you though is, the Medina is extremely pretty and makes for a worthwhile visit. Chefchaouen is a 4 hour drive from Fez so you can imagine how expensive using a private taxi or guide might be. I decided to go by public bus which cost me 75 Moroccan Dirhams ($8 roughly) each way, for a total of $16.

From Fes you can get a bus run by CTM which is the oldest and well established transportation company in Morocco. Its advisable to get a ticket a day prior just in case they sell out especially during high tourist season. I took the first bus out of Fes that departed at 8 am and arrived in Chefchaouen around noon, the first thing I did upon arrival was buy a return ticket to Fes just in case they sold out. I couldn't risk being stuck in the city as my departure out of Morocco is tomorrow. Having taken care of that I took a taxi from the bus station to the city center which wasn't too far, to begin my adventure.

The tourist information booth was open but there was no one manning it so I couldn't get a map or guidance on how to navigate the city. Chefchaouen is not huge and you can get around easily but for someone who had just arrived with no knowledge of where to begin, I was a bit flustered. I bet my confusion really showed because I got approached by a local "guide" who offered to show me around. Since I had very limited time to explore, I took him up on his offer instead of trying to figure out my bearings on my own. He ended up showing me a lot and I don't regret going along with him because I would never have gotten the opportunity to visit some of the sites he showed me, by myself. As I mentioned before, Chefchaouen is very picturesque so I will just go ahead and stop my writing here as I let you enjoy the photos. 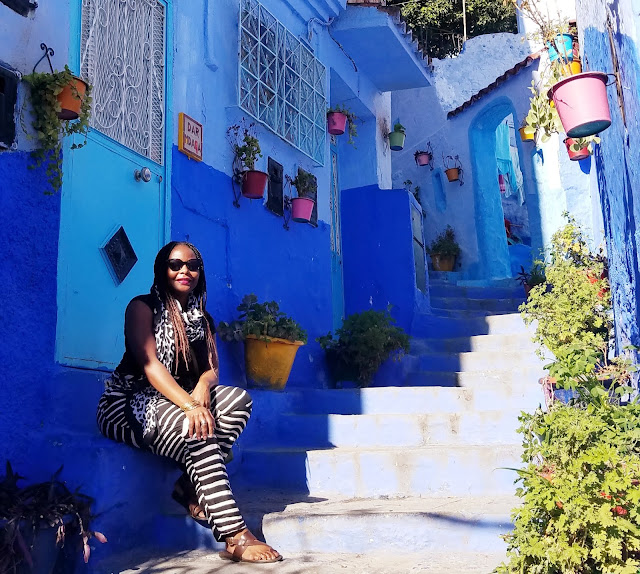 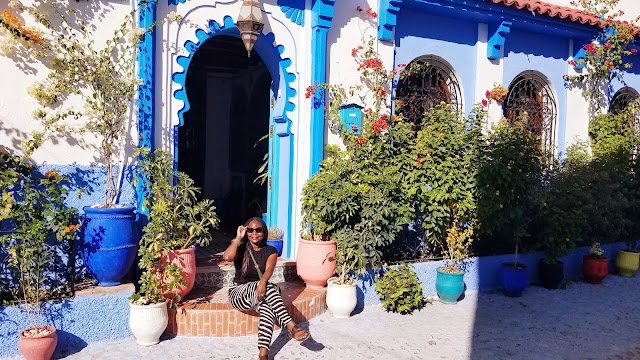 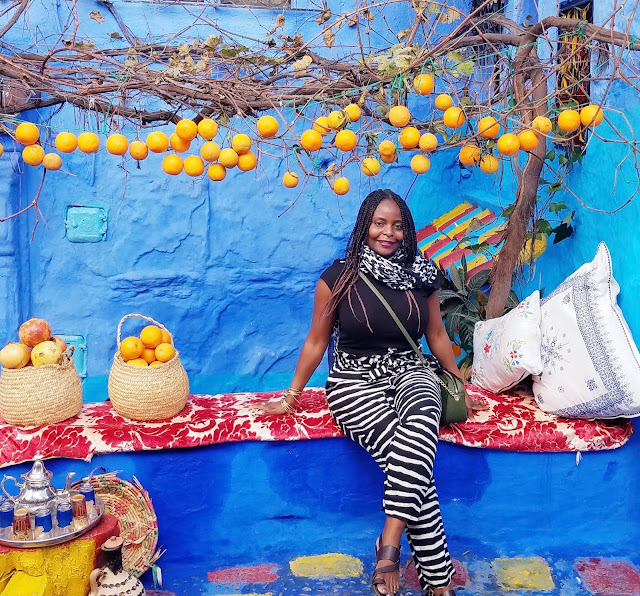 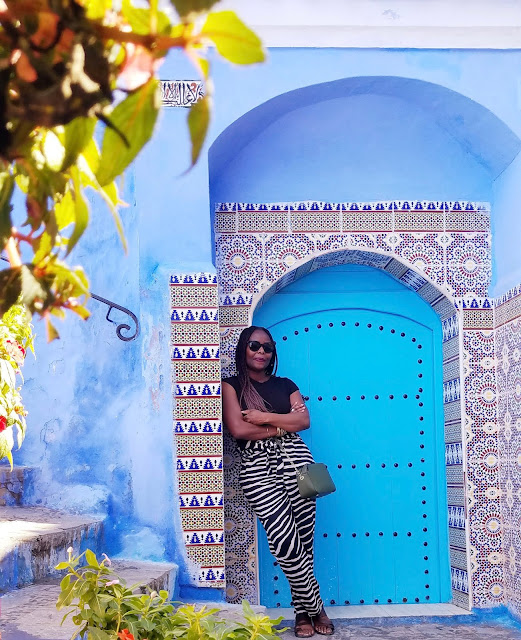 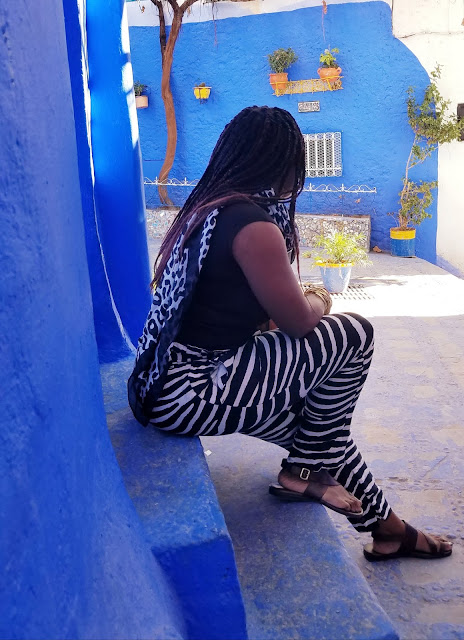 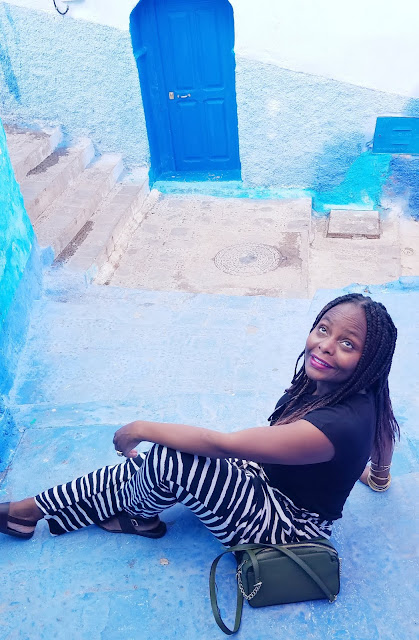 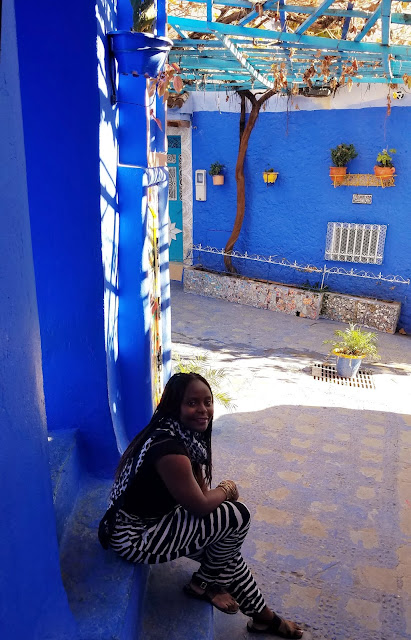 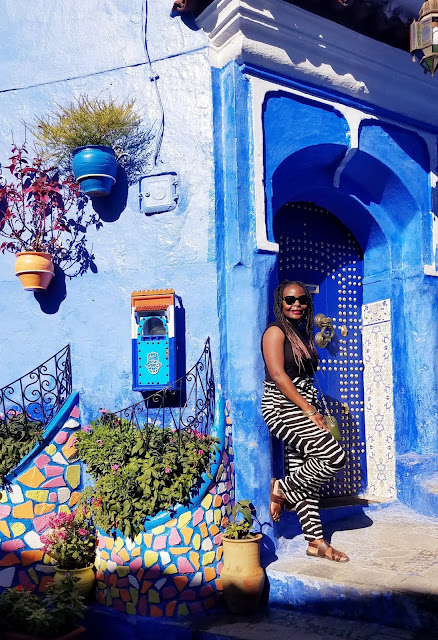 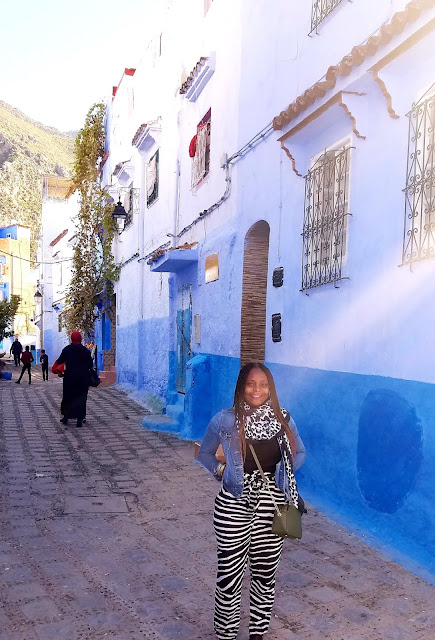 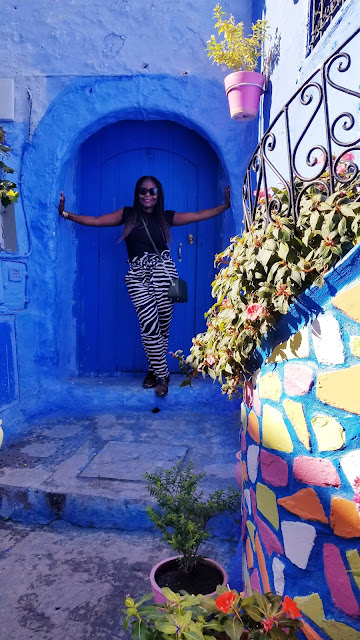 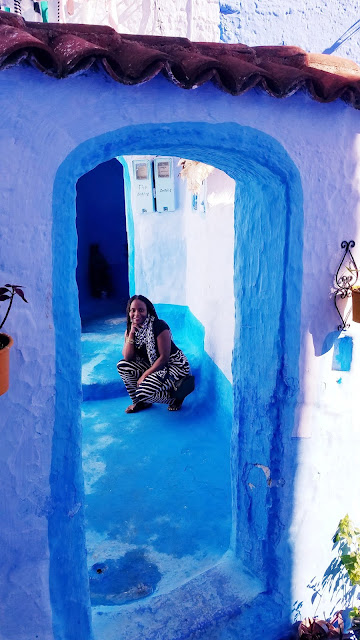 Tried on the traditional clothing of one of the local tribes. 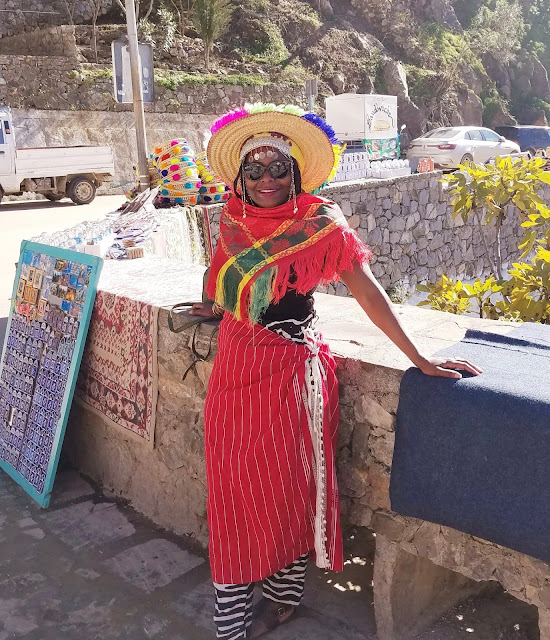 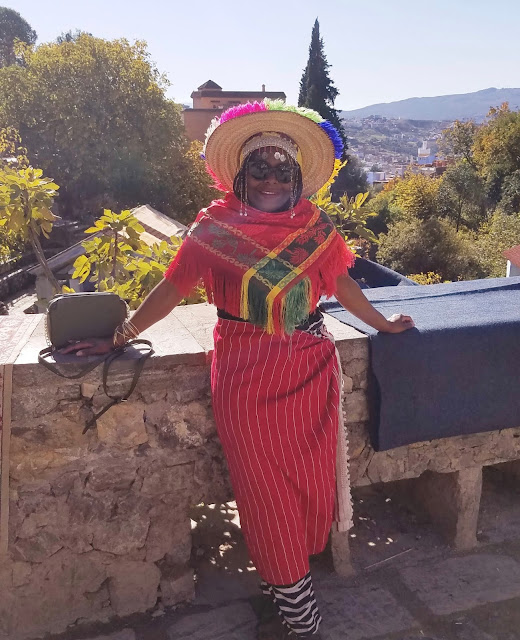 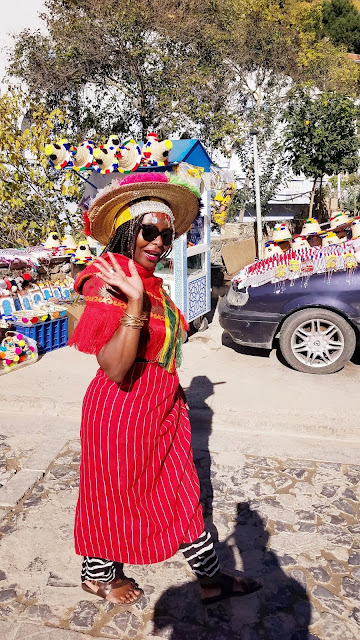 The Spanish mosque, to get here there is quite a bit of uphill trekking required but the aerial view of the city makes it so worth it! 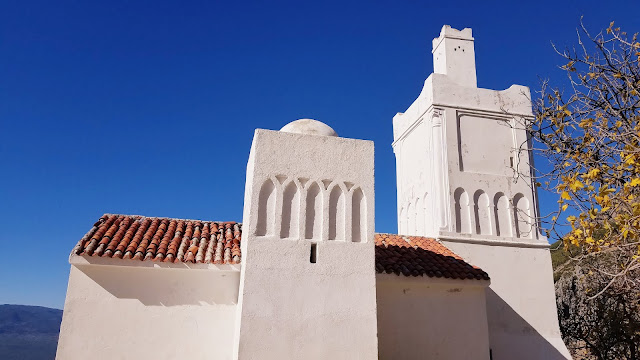 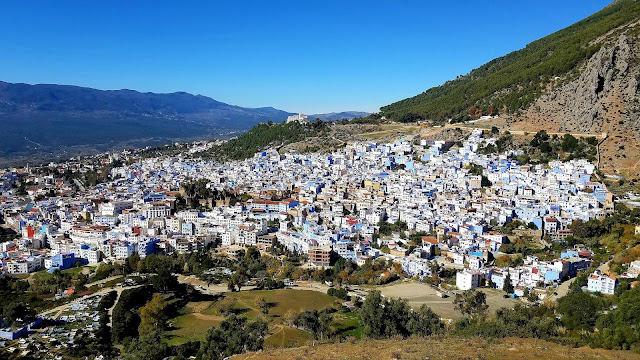 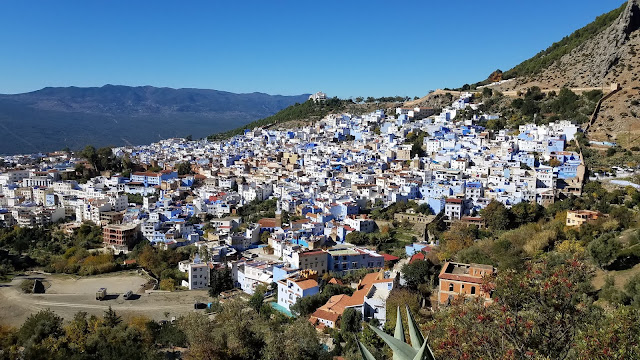 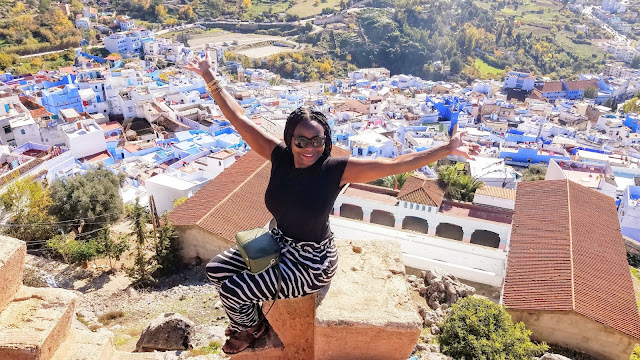 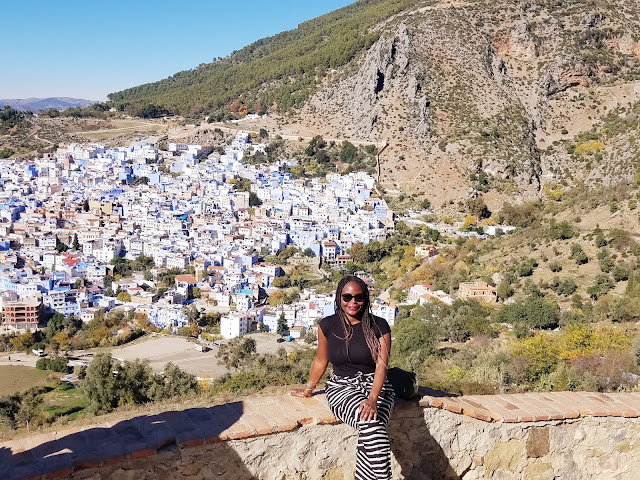 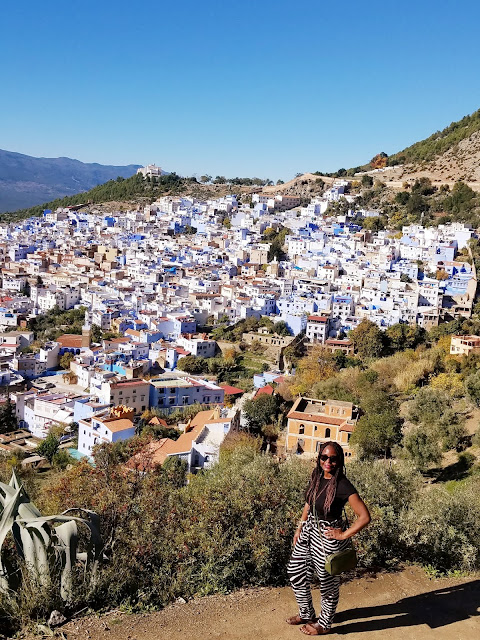 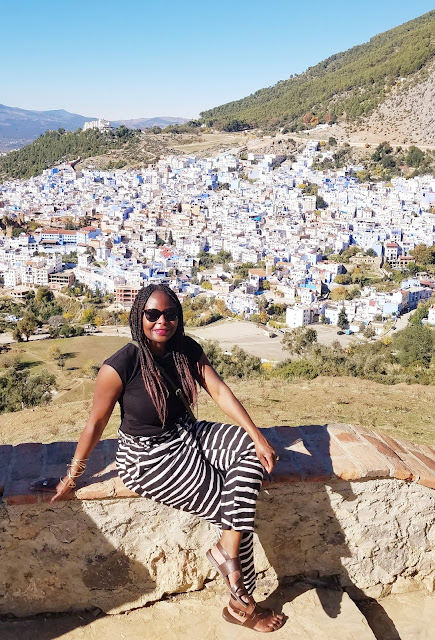 That's it folks! tired of my face yet? turns out the "guide" who was showing me around is fond of taking photos so kudos to him, saved me the trouble of asking strangers to take my photos. After getting my fill of Chefchaouen, I made it back to the bus station to go back to Fez. It was a lovely day indeed even though I was pressed for time.

In Marrakech when I had mentioned to Yassin the guy who works at the airbnb I stayed at that I was heading to Chefchaouen, the first thing he said was "there are a lot of Chinese people there." I just figured he meant there are a lot of Chinese tourists who visit the city so I did not think anything of it. Then the guide at Chefchaouen mentioned the same exact thing before adding that a lot of Chinese and Japanese women come to the city to hook up with the local Moroccan dudes. I was like, "Aaah! okaaaay? but that can't be the only reason that they visit." He laughed and said, "you know Chinese men have tiny pee pee and us Africans have big ones so they come looking for that." Don't shoot the messenger, those were his exact words. I changed the subject real quick especially when he started giving me that sly look.

Apparently a lot of people also come to the city because of hashish which is rampant here even though its illegal to produce or even sell. Will you look at that, all along I thought people came for the picturesque sites of the city, silly me...........apparently big pee pee's and hashish are a big draw for tourists as well (insert laughing emoji).

If you visit a Hammam here, please avoid the sun for a couple of days at least. After last night's scrub down at the Hammam, my skin was a bit raw especially my face so you can imagine how it felt under the hot sun today. I could feel the sting! my poor face.

So far I can say I have felt very safe being up and about by myself in all the places I have visited within Morocco. Despite annoying catcalls here and there, I haven't felt like my safety was threatened even once.

Speaking of catcalls, in Chefchaouen I was walking along this narrow alley and I passed by a group of these young boys who appeared to be teenagers. As soon as I passed them one of them shouted bomboclaat! It was so random and I almost burst out laughing when I heard it (he was referring to me). Sometimes its the most ridiculous things that just force you to laugh.

Speaking French would have really come in handy here in Morocco.