Today was a good and very productive day spent exploring Marrakech and learning more about the city. I booked a 3 hour city tour via airbnb so that I could get a better understanding of my surroundings then be able to explore on my own. The tour is titled "New Concept of Marrakech" and the guide's name is Youssef, I am giving out all this information because it was a very enjoyable tour and I highly recommend him to anyone reading this and thinking of visiting Marrakech.

The tour was meant to start at Dar el Bacha museum which is touted as one of the most beautiful palaces in the city, but unfortunately it was closed so we headed to Le Jardin Secret (secret garden) which has housed some of Morocco's most important political figures. It was recently renovated and visitors can now enjoy the tranquil grounds upon which the garden stands.  A lot of couples shoot their wedding photos there and we so happened to witness this while there, fashion shows from big name designers are also held there. 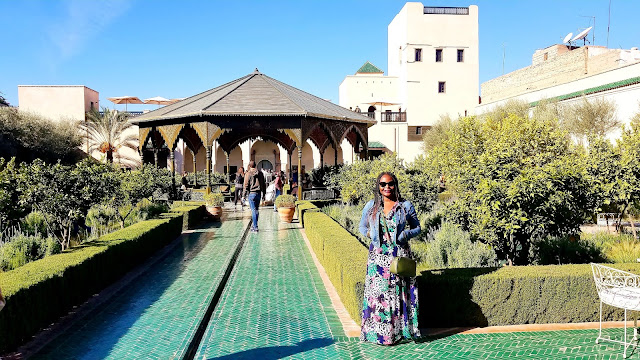 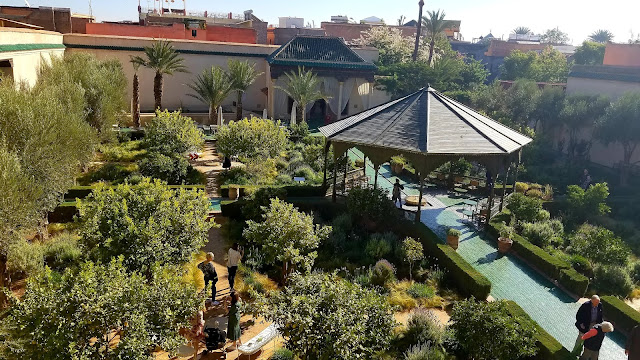 From the secret garden we headed to Alnour, a non profit organization that helps disabled women make a decent living. Hearing the women speak about the organization was very touching and they were not pressing us to buy any of their products, they were just so happy to tell us all about what they do and how the organization has changed their lives. Its truly worth supporting.

We got to visit various parts of the souk (market place) in the Medina that are not tourist traps and where no one harasses you to buy their stuff. It was such a welcome change, trust me! actually this tour aims to take tourists off the beaten path and venture into areas that most people don't even know about, I would say it was a welcome change from the norm. 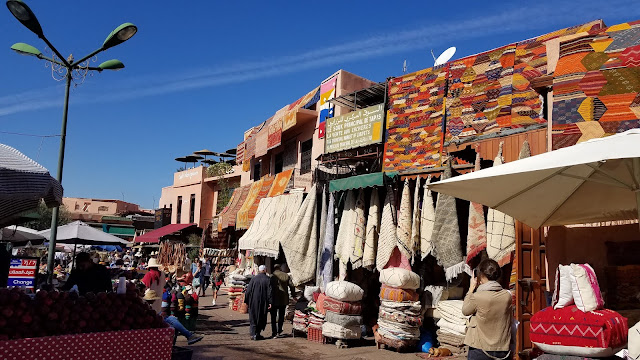 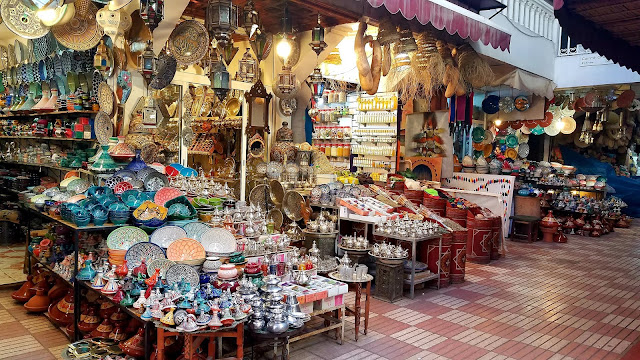 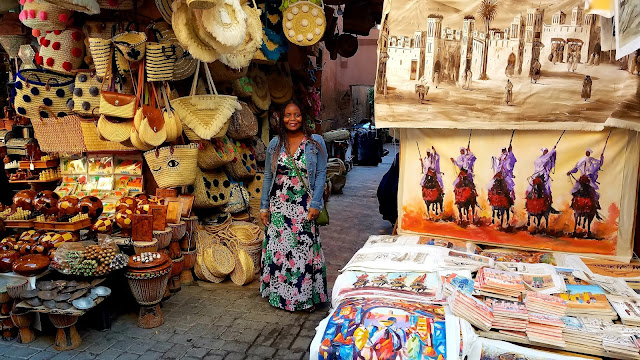 Since we had missed out on going to the museum due to its closure, Youssef our guide decided to make up for it by treating us to some very tasty local cuisine, Tangia and roasted lamb (can't remember the name of the lamb dish). The food was AMAZING!!! and get this, the restaurant we ate at is owned by a guy who had been the Moroccan king's chef for 20 years! even more fascinating was learning that the likes of Anthony Bourdain, Andrew Zimmerman and Gordon Ramsey had eaten there! the restaurant is called Chez Lamine

I was going to have a solo photo taken at the entrance of the restaurant but these waiters came up to me and asked to be included, how could I say no? they were so sweet! 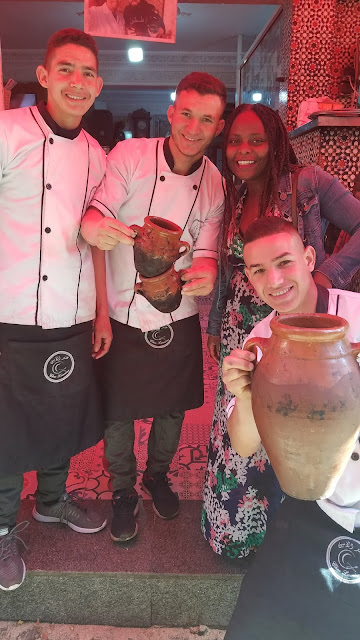 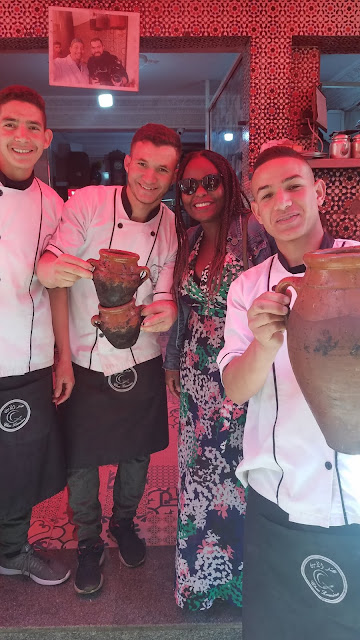 Tea Moroccan style, before the meal was brought out. See how the guy is holding the pot high? that's the proper way of doing it here. 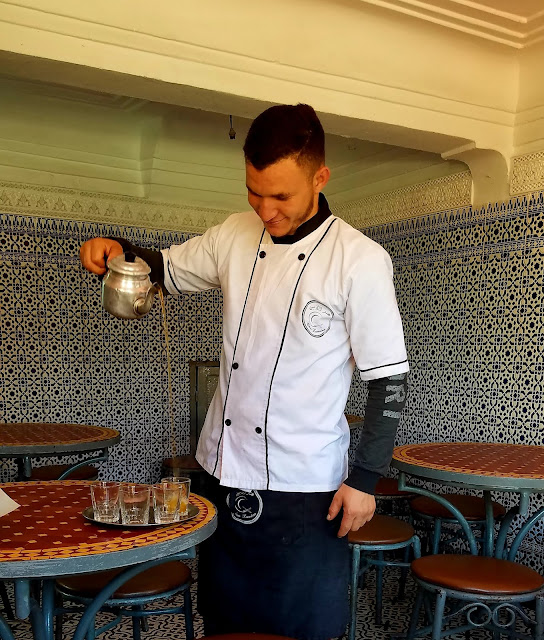 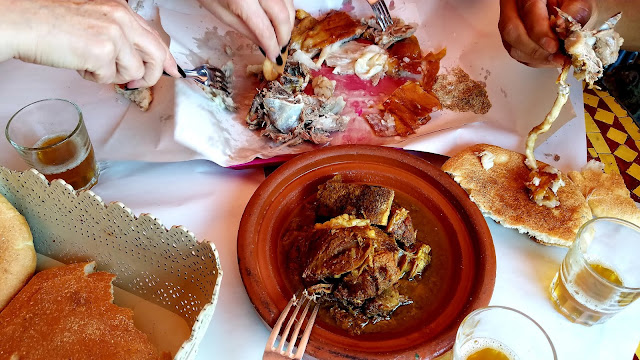 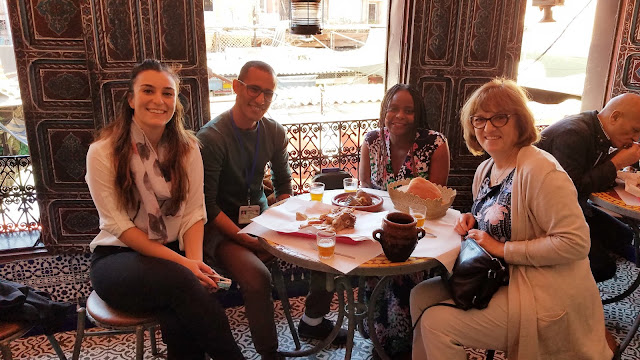 I am in love with the various colorful tiles I have seen in Marrakech. I couldn't resist a photo session at the restaurant. 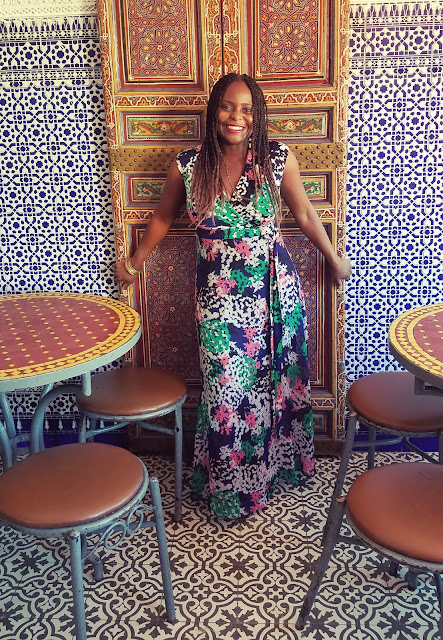 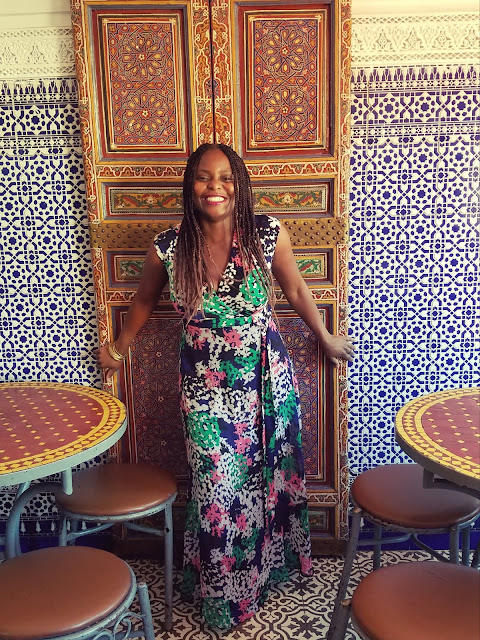 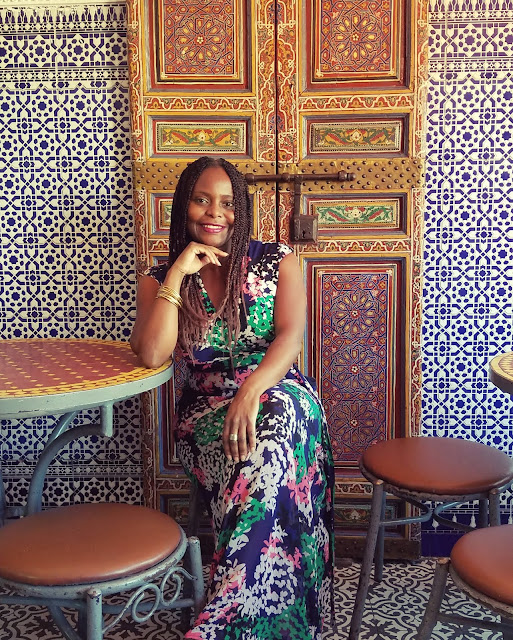 After the tour we split up and everyone went their separate ways after saying their goodbyes. I made my way to the Bahia Palace which has a long history but I will summarize it by stating that it was built in the 19th century and is considered one of the major monuments of Morocco's cultural heritage and is ranked as one of the main tourist spots in Marrakech. When I got to the palace it was packed so it was hard getting decent photos but at least I can say I enjoyed the experience of being there. The fee to get inside is 70 Moroccan Dirhams (about $7) and the hours of visitation are between 9:00 am to 5 pm

It was hard taking photos with the large crowd of tourists so this is the only decent photo I managed to have taken. 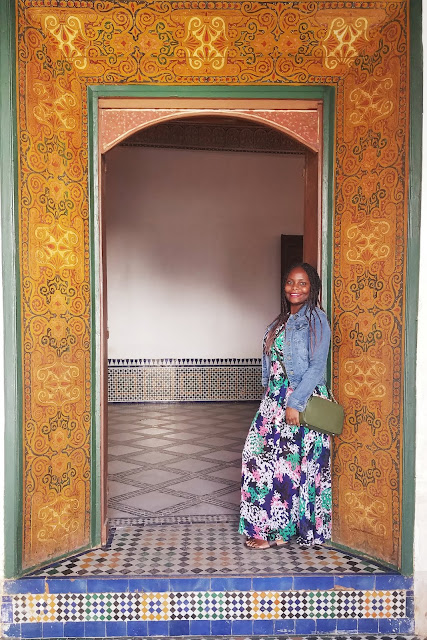 After spending some time at the Bahia palace I decided to move on to the Saadian Tombs from the Saadian dynasty that ruled Morocco between 1524 and 1659. These tombs remained hidden until 1971 when they were rediscovered. As morbid as tombs and the idea of death may be, I have to say they look very beautiful! it's even hard to imagine death being associated with them. Entrance to get inside to view the tombs is 70 Moroccan Dirhams (about $7) and the hours of visitation are between 9:00 am to 5:00 pm. 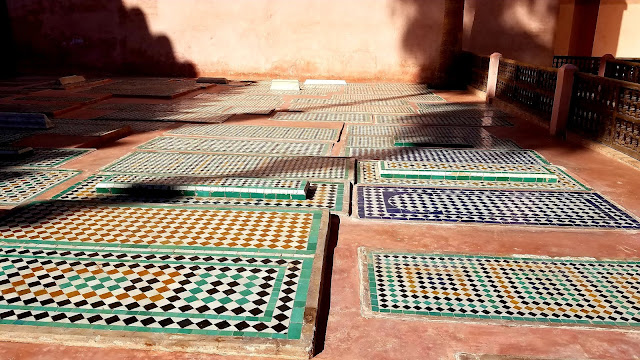 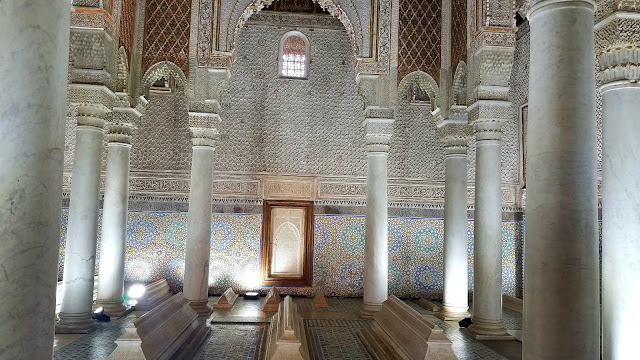 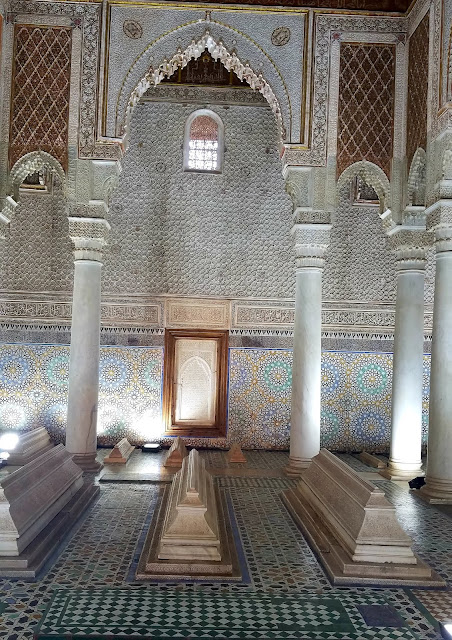 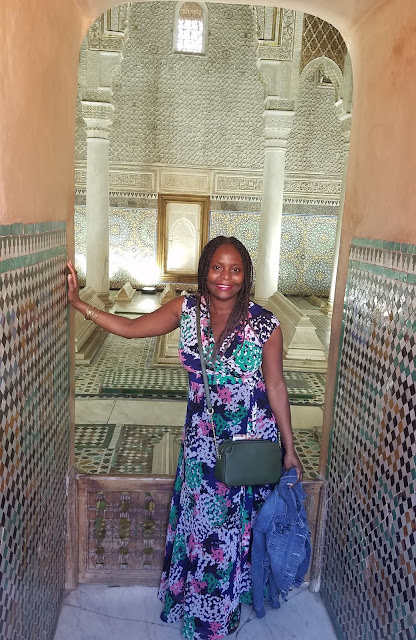 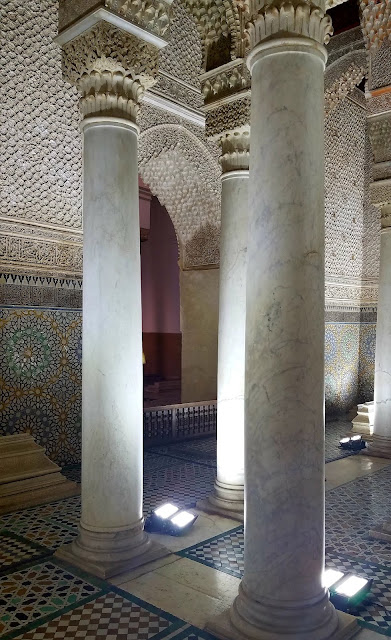 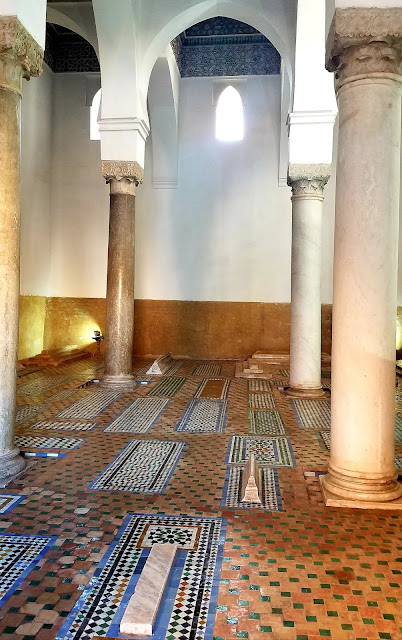 My next stop after the tombs was Jardin Majorrelle. If this is not one of the most photographed sites in Morocco aside from Chefchaouen, I don't know what is. It is a beautiful botanical garden that was created by a French artist named Jacques Majorelle who dedicated most of his life working on it. The garden is so beautiful that I don't think pictures do it justice. Minus the throng of tourists, it actually makes for a nice tranquil getaway from the chaos of the Medina. Entrance to the garden is 70 Dirhams and the the hours vary depending on the month. Oct 1st to April 30th the hours are 8:00 am to 5:30 pm, May 1st to Sept 30th 8:00 am to 6:00 pm and lastly, during the month of Ramadan 9:00 am to 5:00 pm 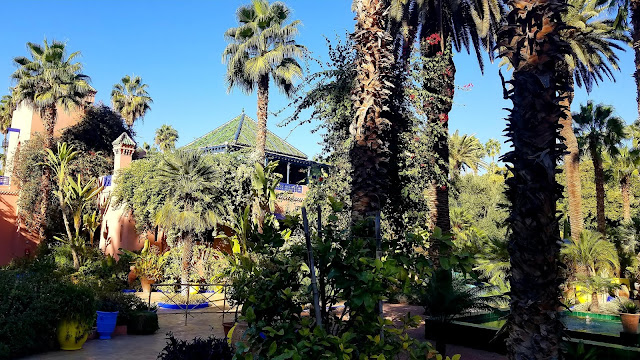 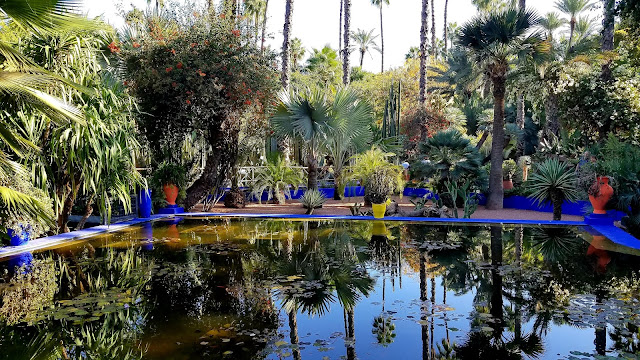 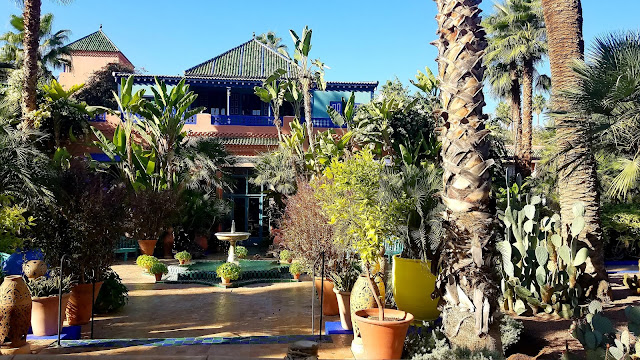 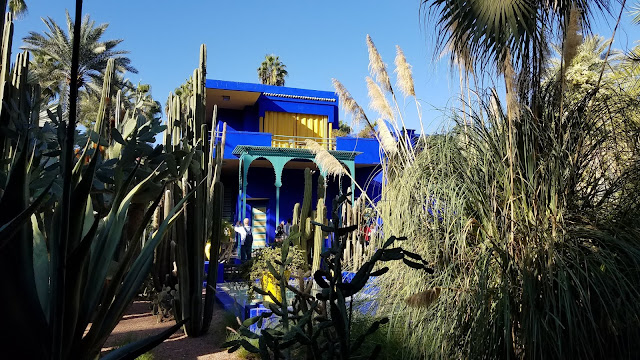 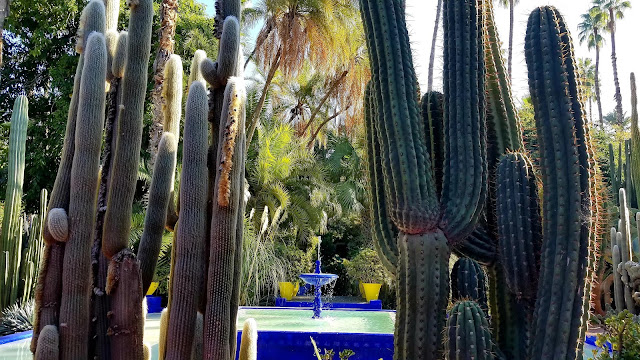 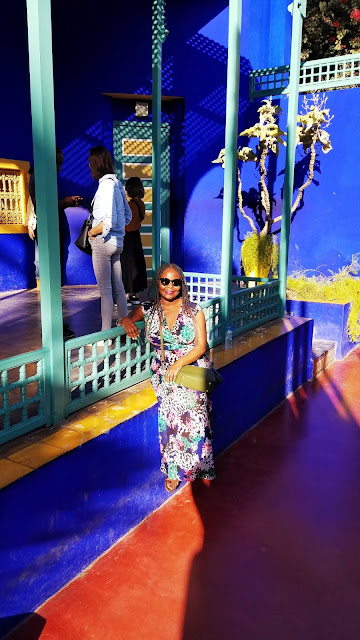 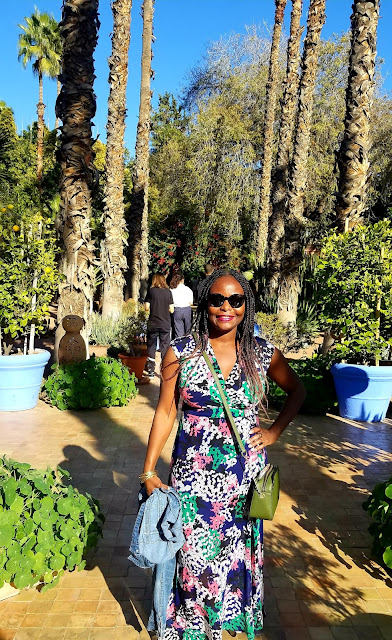 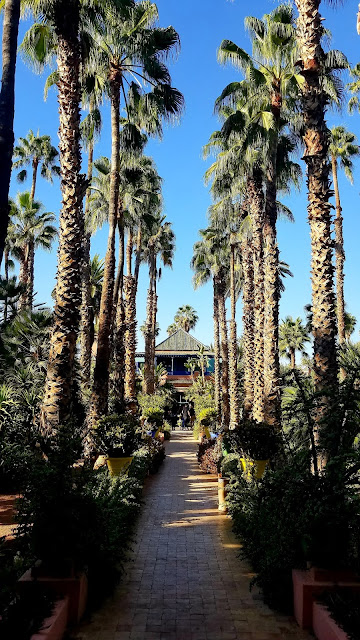 After exploring the areas that I had intended to, I was tired so after having a light dinner at one of the local restaurants, I went back to my Riad and took a nice long hot shower before calling it a day.

I don't like the main square Jemaa el Fnaa that much, its exhausting dodging hustlers. It is safe but expect to be hustled left, right and center to buy stuff. It has become my landmark though, as long as I am at the center I know how to get back to the Riad and I know which alleys to take.

As a woman traveling solo you will be harassed by men in Marrakech (it might be a different experience for some but this is based on my own experience). I am talking catcalls and random men whispering in your ear, I usually just ignore the offenders and act like I am oblivious to everything around me although it annoys the hell out of me and most of the time I fantasize about punching them in the mouth.

Speaking of men, a lot of the souks I have seen are heavily male dominated and it can be very intimidating. Imagine ending up in an area with a bunch of men congregated then when they see you they all stop talking and start staring at you intensely as they make their way toward you and either hustle you to buy stuff from their stalls or start catcalling or clearly talk about you as you try your best to ignore them. Today I had that experience several times and it got to a point where I was feeling so overwhelmed.

Despite the annoying incidences, for the most part I have met very wonderful people that have made my trip enjoyable. I hope I haven't painted a bad picture of Marrakech because I am actually enjoying the city minus the few bad apples who always seem to stand out. So should you travel here alone as a woman? why not? do it! men actually also get harassed but it's mostly to buy stuff. Some of these hustlers just take it a step further with women.
- November 25, 2019