Today I decided to venture outside Marrakech and and take a tour to the Atlas mountains for a different kind of experience. The Atlas mountains stretch across various countries in the Northwestern part of Africa and is the home to Morocco's indigenous community, the Berbers.

I booked the tour via airbnb and the itinerary suggested that we would have a guide taking us to the Atlas mountains showing us local Berber villages along the way, then guide us on a hike before taking us to have lunch at a local villager's home in order to experience their way of life. It sounded pretty interesting so of course I signed up for it.

We left Marrakech early in the morning around 8:30 am and after about half an hour's drive we stopped at an area where we were taken on a camel ride. This was our first experience of the day, we were given traditional Berber clothing then each one of us in the tour was mounted on their own camel before we set off. The camel ride was actually very relaxing albeit uncomfortable. My thighs were shaking by the time we got done. Even Ahmed the tour guide informed us that riding camels is more uncomfortable than riding a horse...........in my opinion, riding both is uncomfortable. All in all I actually enjoyed the ride minus the slight discomfort. 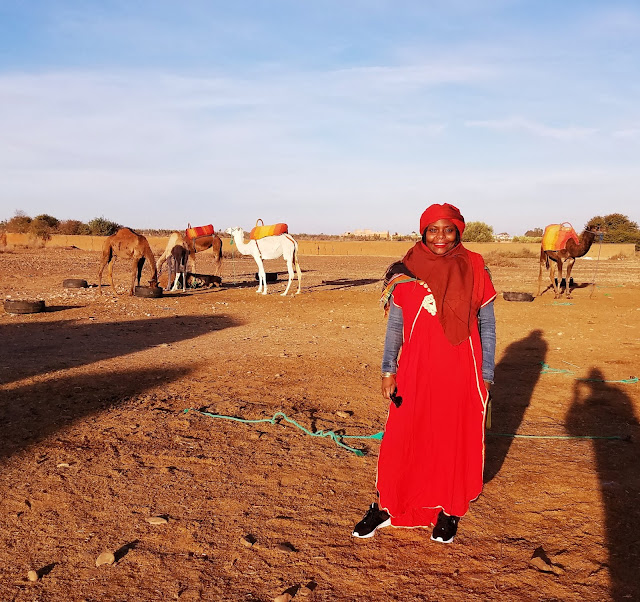 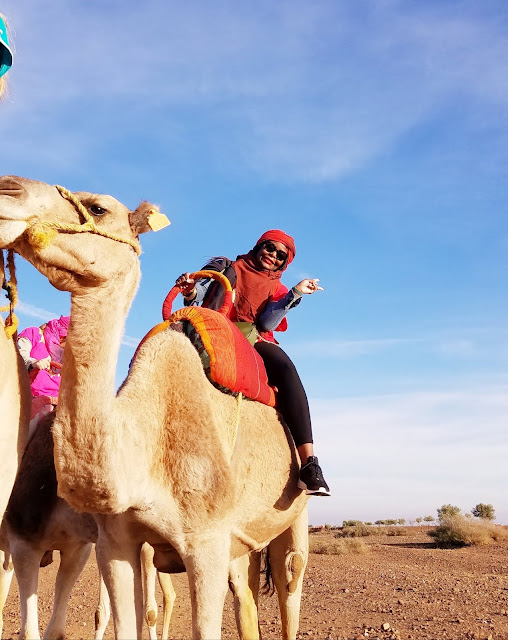 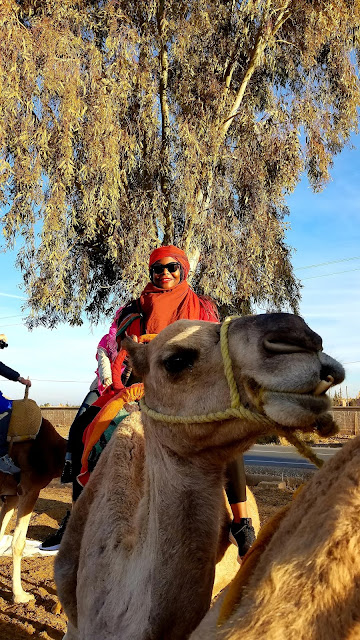 After the camel ride, we had tea while Ahmed educated us on his community and it's history (he happens to be Berber). It was very fascinating and I actually learned a lot, these learning opportunities are why I love traveling so much. 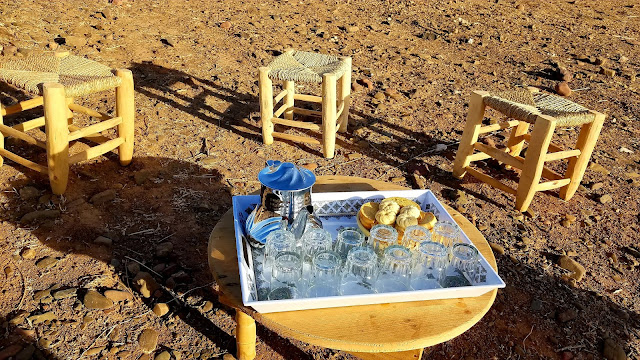 We continued our journey and I took a nap for the most part but along the way we made stops to take photos of some of the Berber villages dotting the mountainside, plus the surrounding scenery. It actually reminded me so much of Jordan. 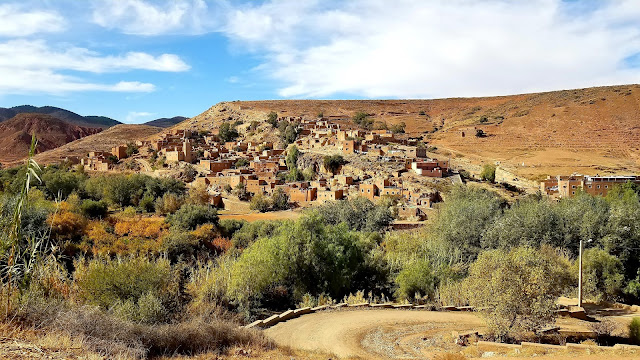 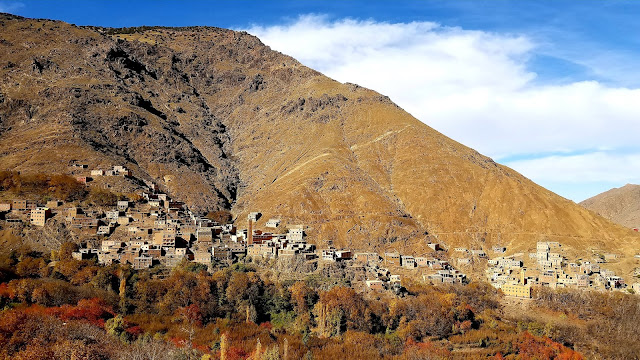 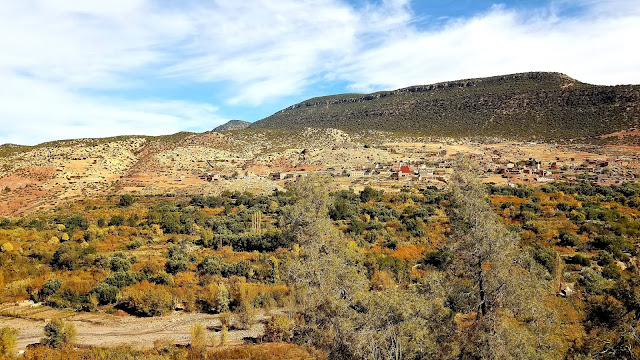 Everyone meet Ahmed, If you are ever in Morocco and want to head to the Atlas Mountains, look up his tour in airbnb under "Day Trip to Atlas Mountains & Camel Ride." The numerous positive reviews should give you a clue on the quality of his services. 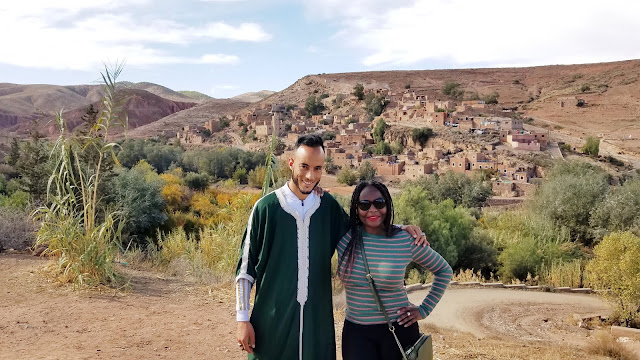 We had interesting conversations as everyone in the group got to know each other and asked Ahmed more questions about his community and history. Finally it was time to move on so our next stop was at a Berber weekly market. Turns out it was our lucky day as the market opens on Tuesdays only, the scene reminded me of the markets in Kenya and parts of South America. I felt right at home although I noticed some people in the group getting a bit squeamish especially when we were invited to try some of the food. I was reaching out my hand for the food without second thought, food poisoning be damned! 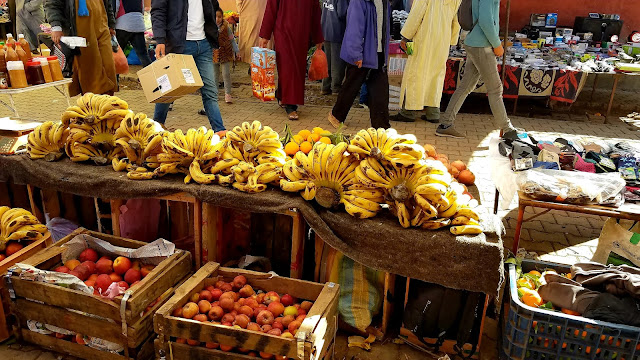 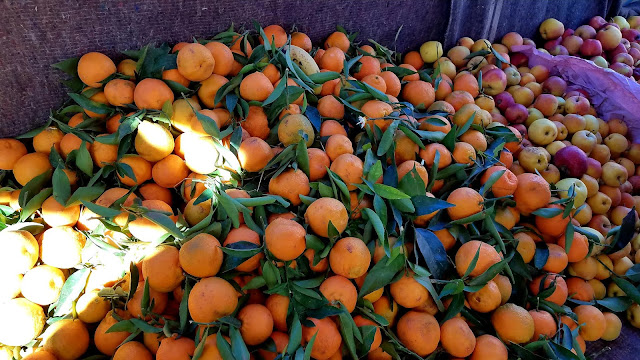 We walked around the market as Ahmed explained how things operate and how the Berbers trade amongst each other, before heading to our next stop that happened to be a women's cooperative where Argan oil is made from scratch.

Ahmed made it a point to emphasize that we were not obligated nor expected to buy anything as it was purely educational. We were warmly received with tea and bread as the women showed us the various products they make and even invited us to try some of their samples. I liked that their vibe was so relaxed and did not come across as pushy or trying to make us buy something. I did end up buying two bars of soap though but it wasn't out of pressure, I bought them because I truly wanted to.

From the women's Co-op our next stop was the starting point for our hike which turned out to be pretty tame actually, it was good exercise but I wouldn't say it was hard for anyone not to be able to go through with it. The hiking trail was very serene and peaceful and we were surrounded by trees which shielded us from the sun. This hike led to a waterfall where we got to take pictures and relax a little bit before heading back to our van. 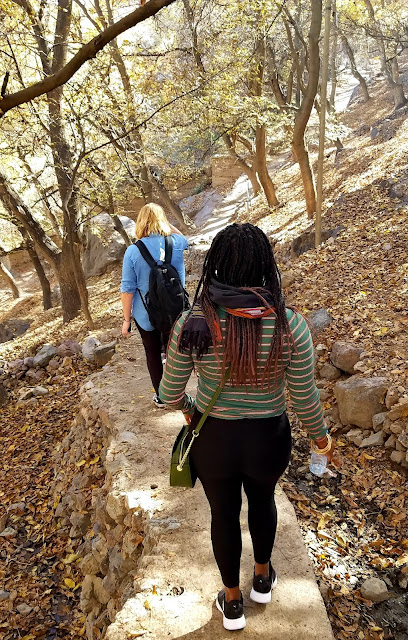 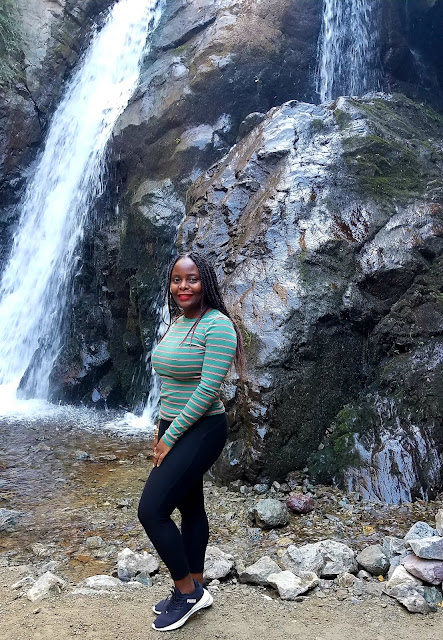 Nothing beats freshly squeezed orange juice after a good walk. 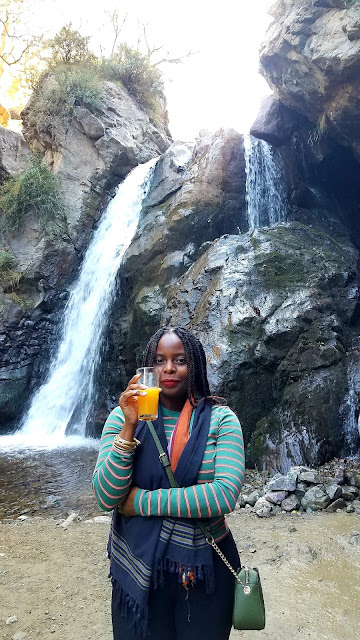 We made out way back to the van and Ahmed informed us that we would be going to his family's house to enjoy a traditional meal cooked by his mother and sister. Everyone in the group was excited and after our hike we were all ready to eat.

Check out that view from the roof top of his family's home. Lovely! 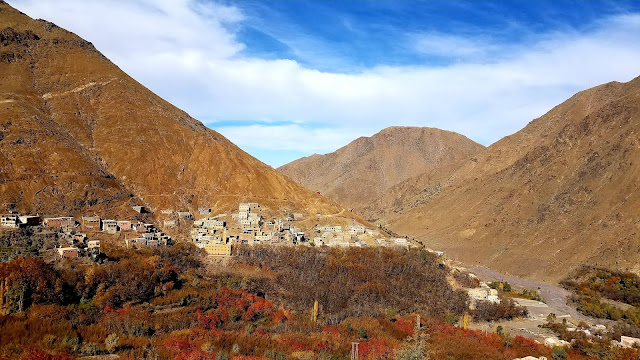 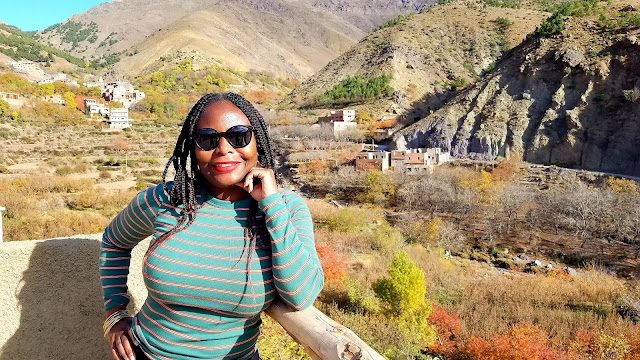 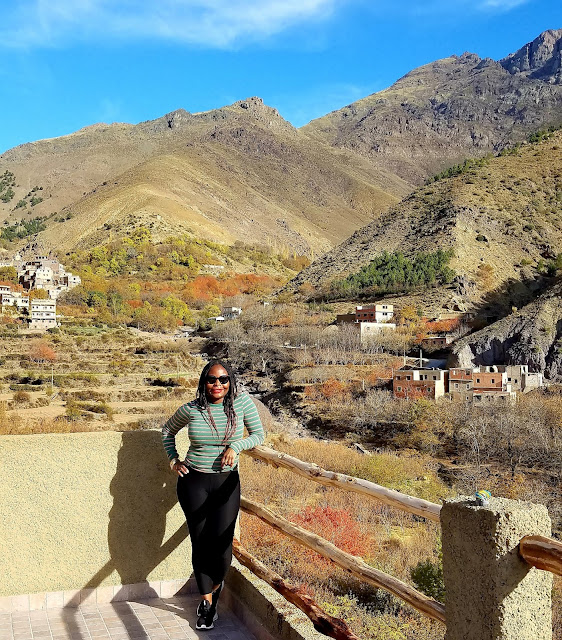 The lunch turned out amazing and everyone was having second and third helpings, it was that good! plus the food was a lot, all 9 of us on the tour could not finish it all. I give props to Ahmed's sister and mother for treating us to such a wonderful meal. 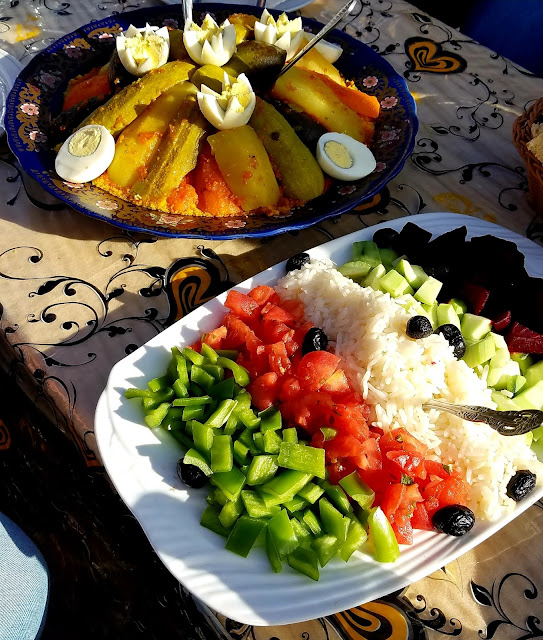 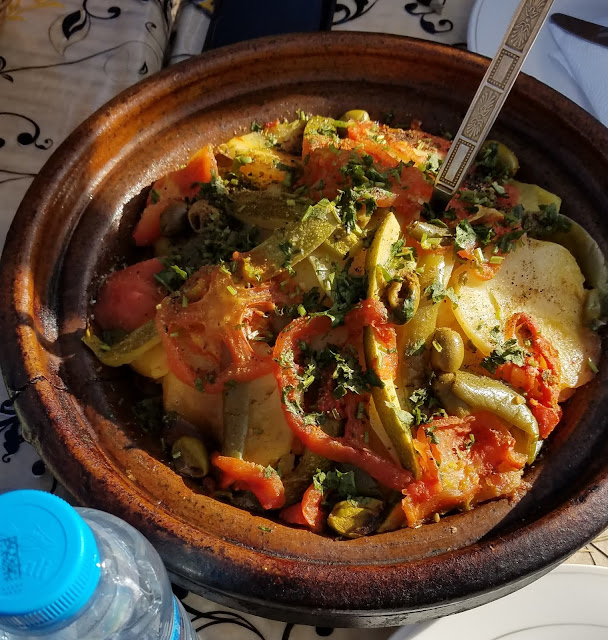 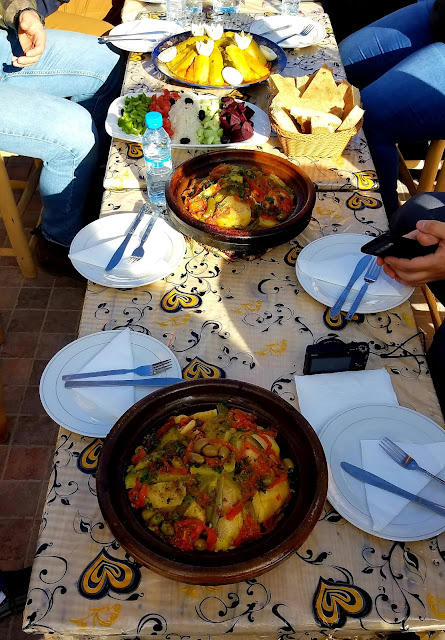 Lunch lasted about an hour before we had to get going, we thanked the family and got back on the bus heading to Marrakech. All in all the whole experience was enjoyable and it was a good day trip to experience and see something different. That's it folks! today was my last full day in Marrakech, I am leaving for Fes tomorrow so we will see what the city has in store for me.

It's funny that at first I was so confused with the streets in Marrakech but now I have become a pro and just when I am comfortable enough to know my way around, I have to leave and repeat the whole process again in Fes.

I met these two ladies who had started their Moroccan journey in Fes and they were saying that it's way harder and complicated to navigate the Medina in that city compared to the one in Marrakech. They said you would definitely need a guide to walk you around because even locals themselves get lost! I am definitely in for a "treat."

A Medina in case you are wondering, is a walled section of an old part of a town or city and is usually characterized by narrow streets that can often feel like a maze. I could be wrong but I think Medina's are mostly found in cities with heavy Arab influence.

I learnt that Berbers were Christians before Arabs who moved from the middle east and settled in North Africa introduced Islam. Some Berbers converted while others remained Christians.

As much as I did not like Jemaa el Fnaa the central square, it has actually grown on me during my stay here. It comes alive in the evening and its interesting to walk around or people watch.

I am so surprised that I had never had Moroccan food prior to visiting the country, turns out I was missing out! the irony is, there is a Moroccan restaurant close to where we live and for the longest time I have been meaning to check it out but just never got round to it. Now I am so curious to find out if their food measures up to what I have eaten here.

Ladies and gentlemen, do yourselves a favor and try some Moroccan food.
- November 26, 2019