For my birthday I ended up choosing Galapagos over Salar de Uyunni in Bolivia because it worked out better logistically and my interest was leaning more toward Galapagos. Flight prices to Bolivia were crazy high and although it is possible to head over to Bolivia from Ecuador by bus, I just didn't feel like undertaking the long journey, I am so over long bus rides. Anyway, enough of the unnecessary explanations I am here to write about my first day in Galapagos so let's do this.

Heading to Galapagos felt like traveling to another country, at the airport all tourists heading to the islands had to pay $20 for a transit card (I believe that's the name) to Galapagos before check in. At the airport in Galapagos I had to part with $100 just to get out of the airport and set foot on the island. This is a mandatory fee that everyone has to pay and I believe it goes toward conserving the Islands, the fee varies depending on the country you are from. I met some Argentinians who told me they are required to pay only $50.

Landing in Galapagos I noticed how hot and slightly humid it was plus the surrounding area around the airport was so dry it looked like some heavy duty drought was in process, I am not kidding you. There were cactus plants here and there, the grass was so brown to the point where it almost looked grey and there might have even been a couple of tumble weeds that blew across the road heading out of the airport. Okay, I exaggerate about the tumble weed but you get my drift and maybe the pictures below will give you an idea of what I am talking about. 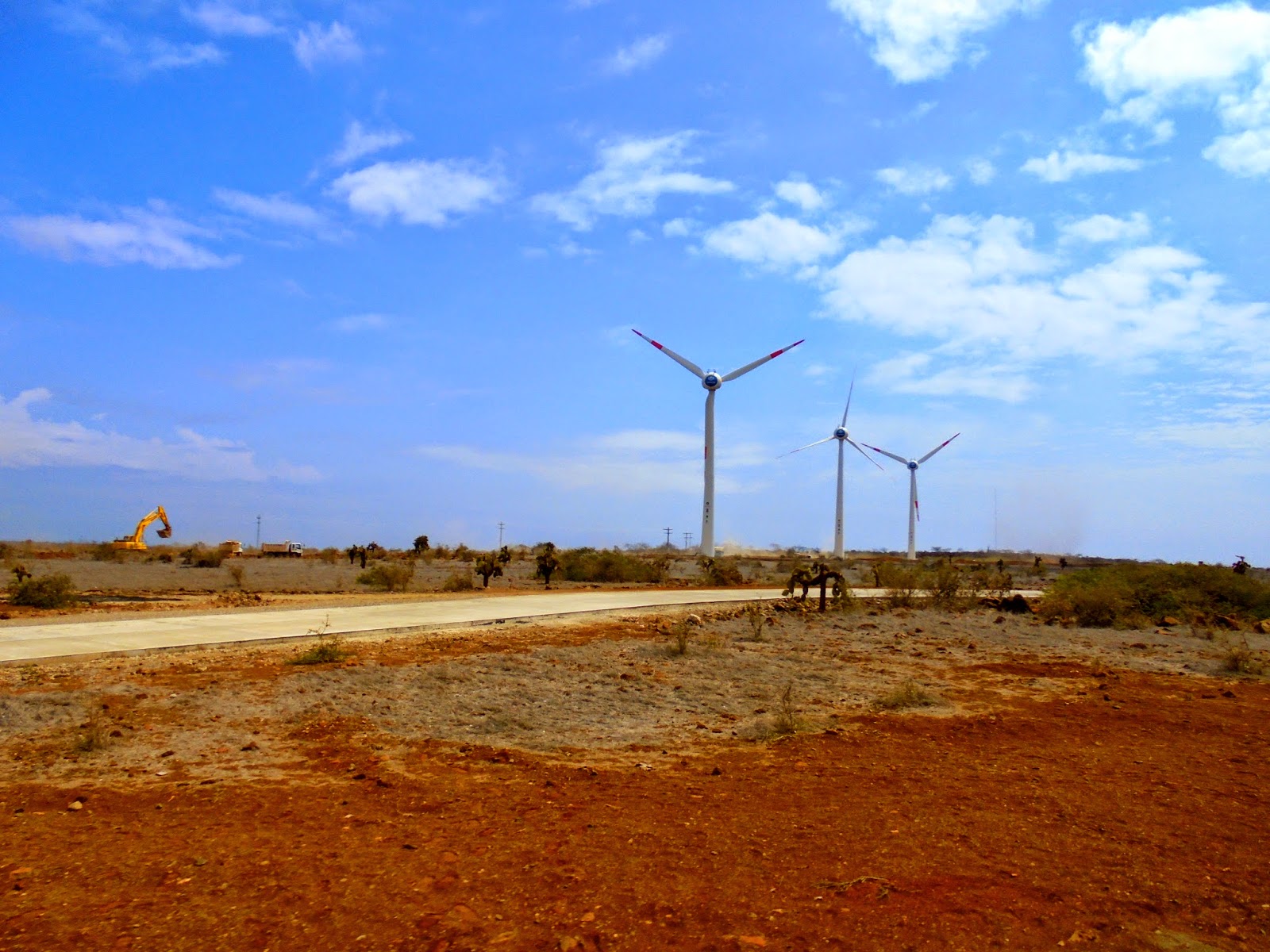 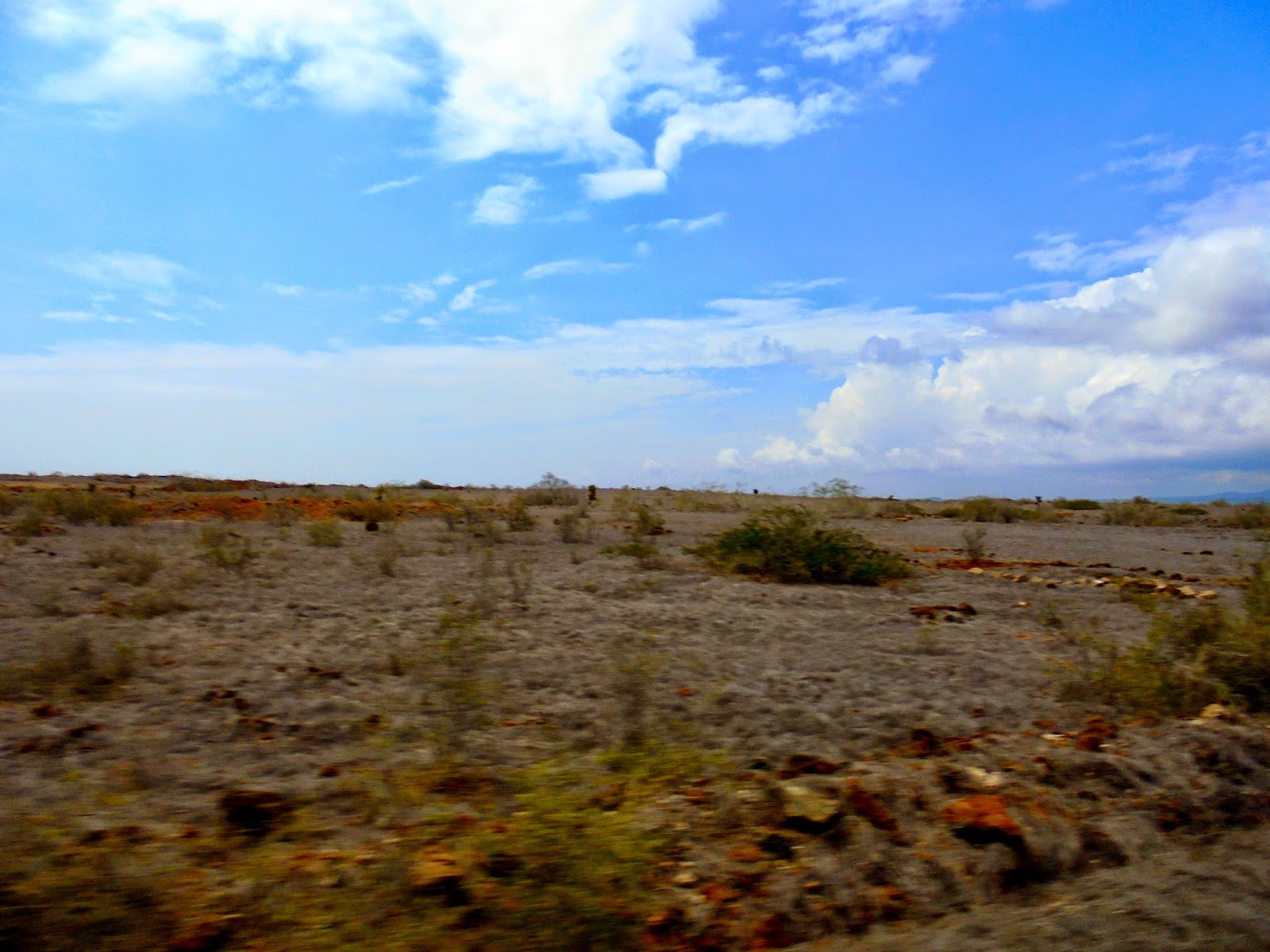 The airport is situated in Baltra island and from there I had to take a shuttle bus to a dock where everyone was waiting to board a boat that would transfer us to the main island of Santa Cruz, where most people start out before heading off to whichever islands they want to tour. The boat ride was pretty short and we were in Santa Cruz within 10 minutes. From Santa Cruz I took a taxi which would drop me to the main part of the island where all the action is.

The taxi driver was pretty cool and we had a good chat as he told me a bit of history about the islands, and I got to learn some interesting new stuff. As we headed away from the airport the vegetation changed so dramatically and all over a sudden there was green everywhere and the land looked so fertile that it was hard to imagine only a few minutes back we had been in a totally different terrain. I even spotted the fattest cows ever just munching away at the abundant grass and my first thought was, "huh? I land in the Galapagos expecting to see the most exotic animals and instead the first animals I see are cows??! what next? chickens? goats?" The taxi driver was just chuckling at my astonishment.

I finally got to my hotel which turned out better than I had expected and I can't complain at all! check out my temporary digs on the island.

I had a tour later on in the afternoon so I took a nap before then because I had woken up really early to catch my flight and the heat just did me in.

In the afternoon I met with a tour guide who would take us to the Charles Darwin Research Center and explain to us the history of the islands and the species of animals to be found around. There was a couple from Argentina so it was a really small group. We walked around the main part of the Island and I managed to take a few pictures despite the drizzle that developed and seemed to last for hours. 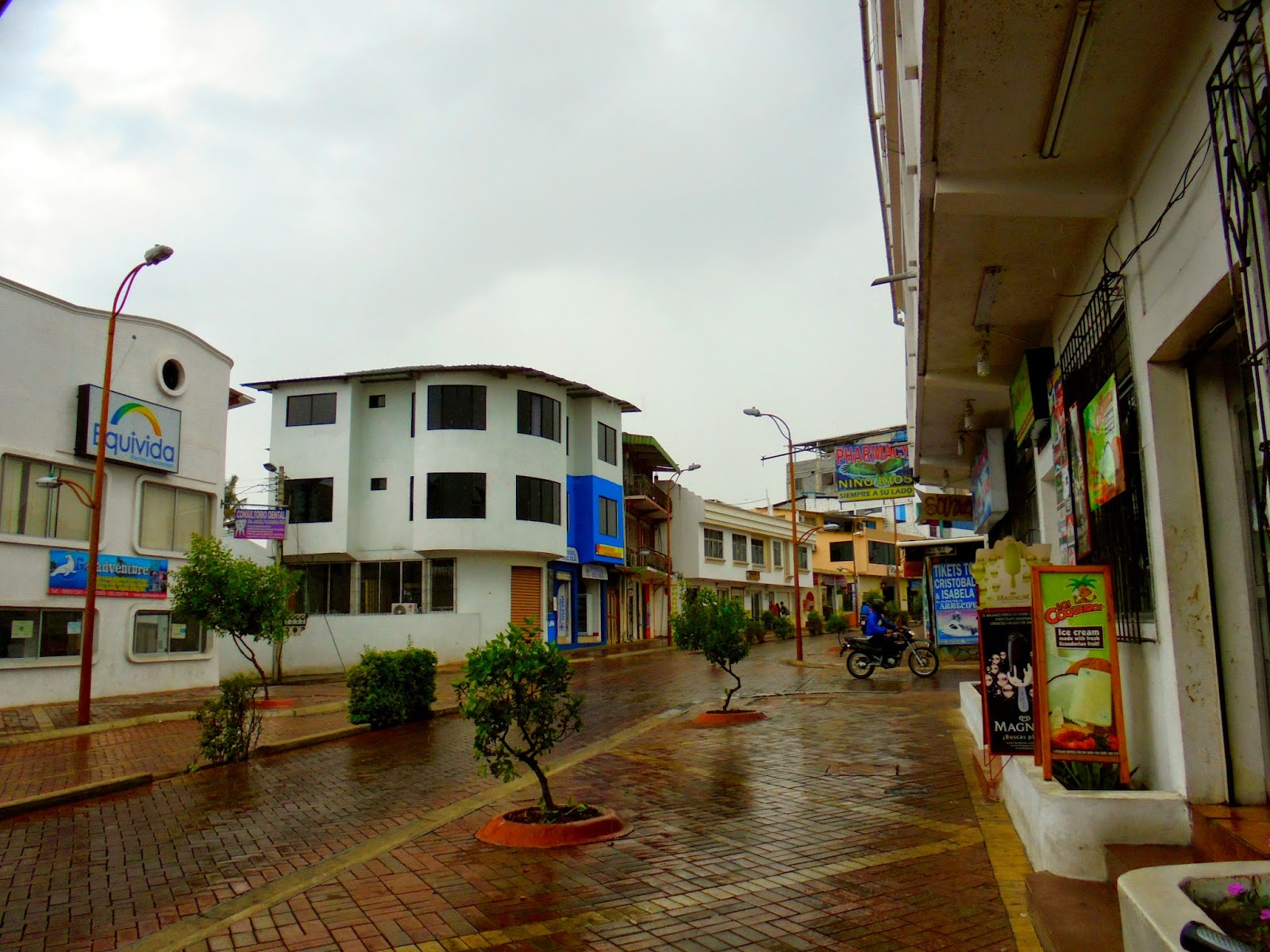 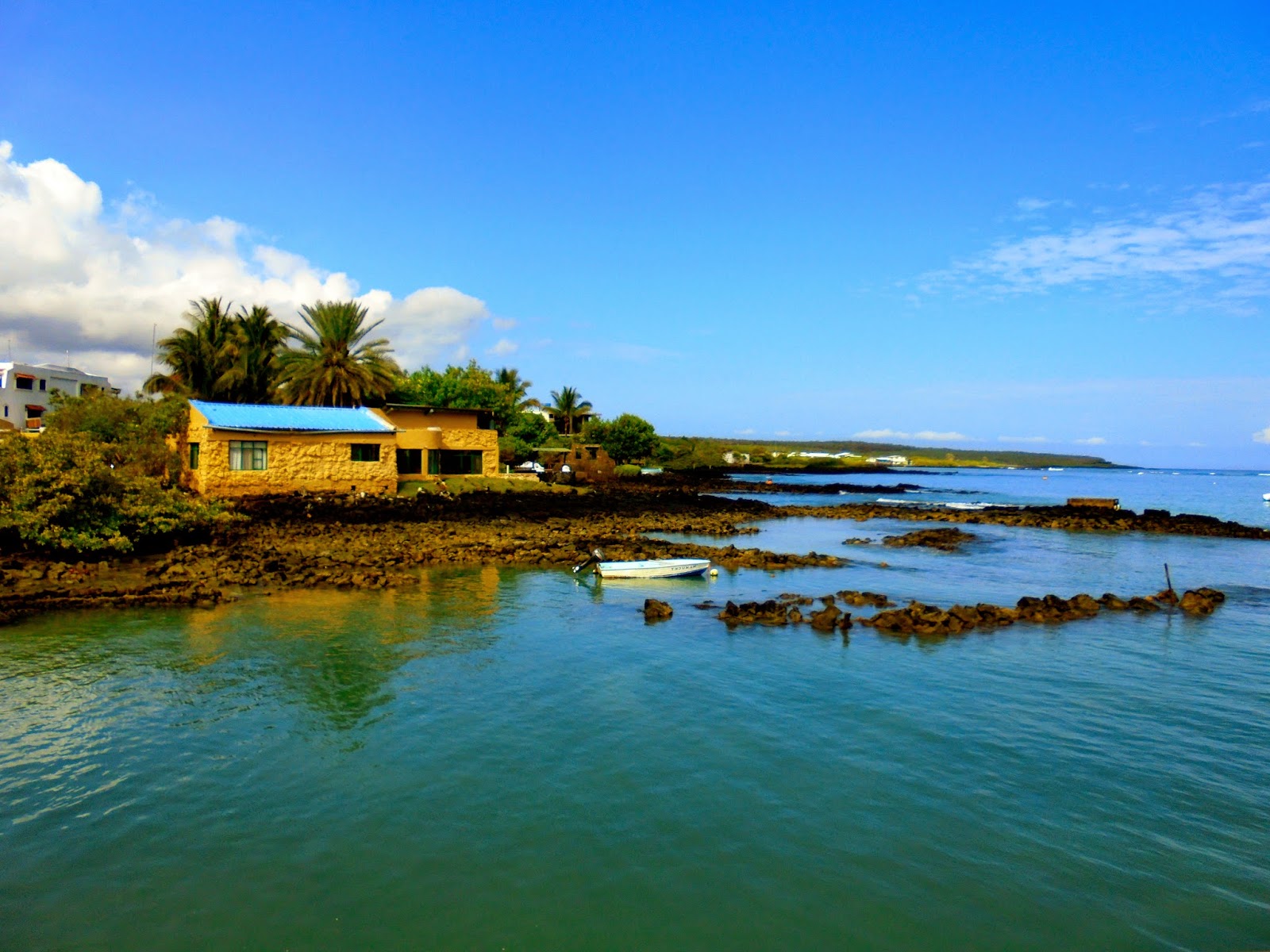 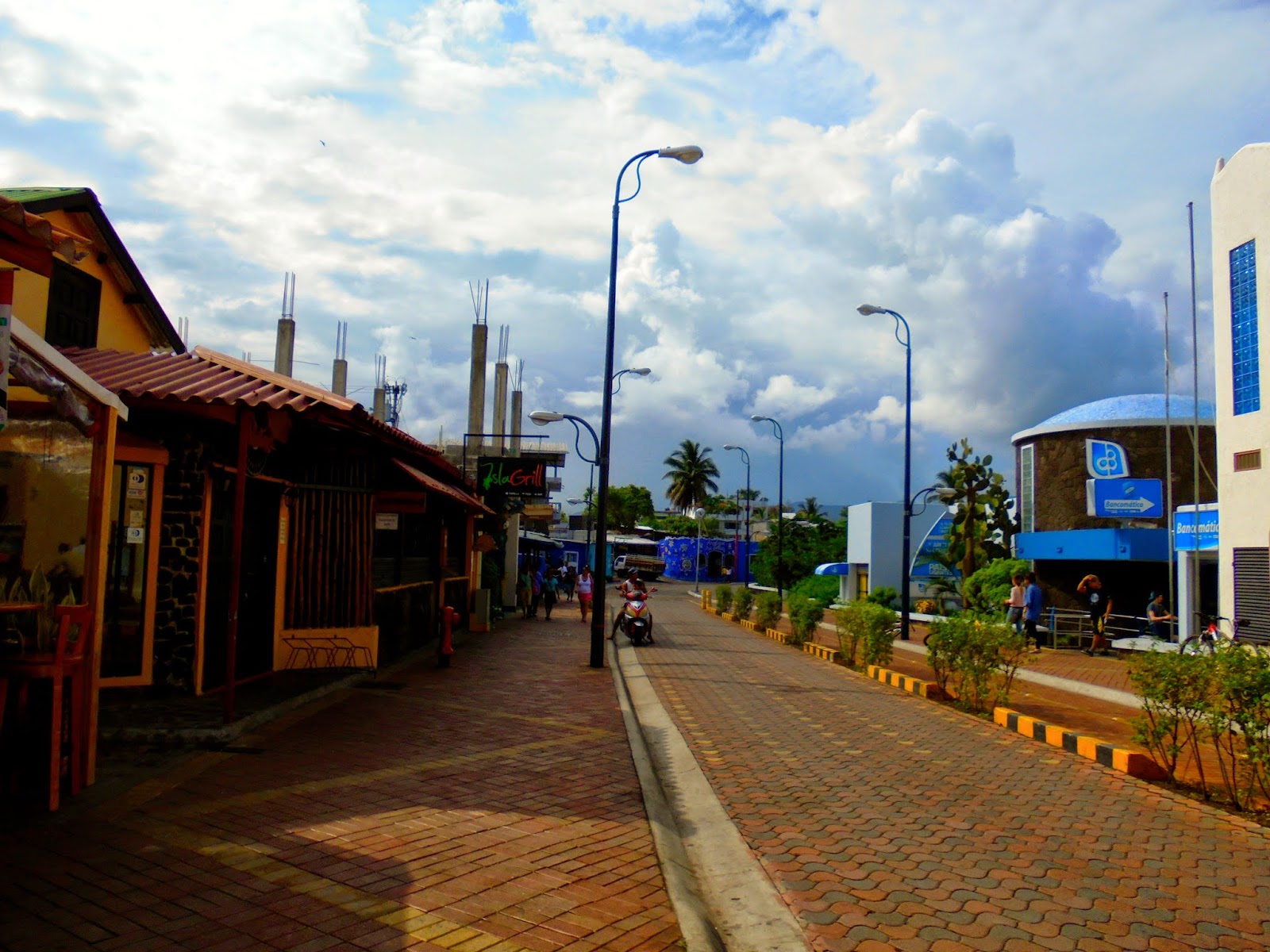 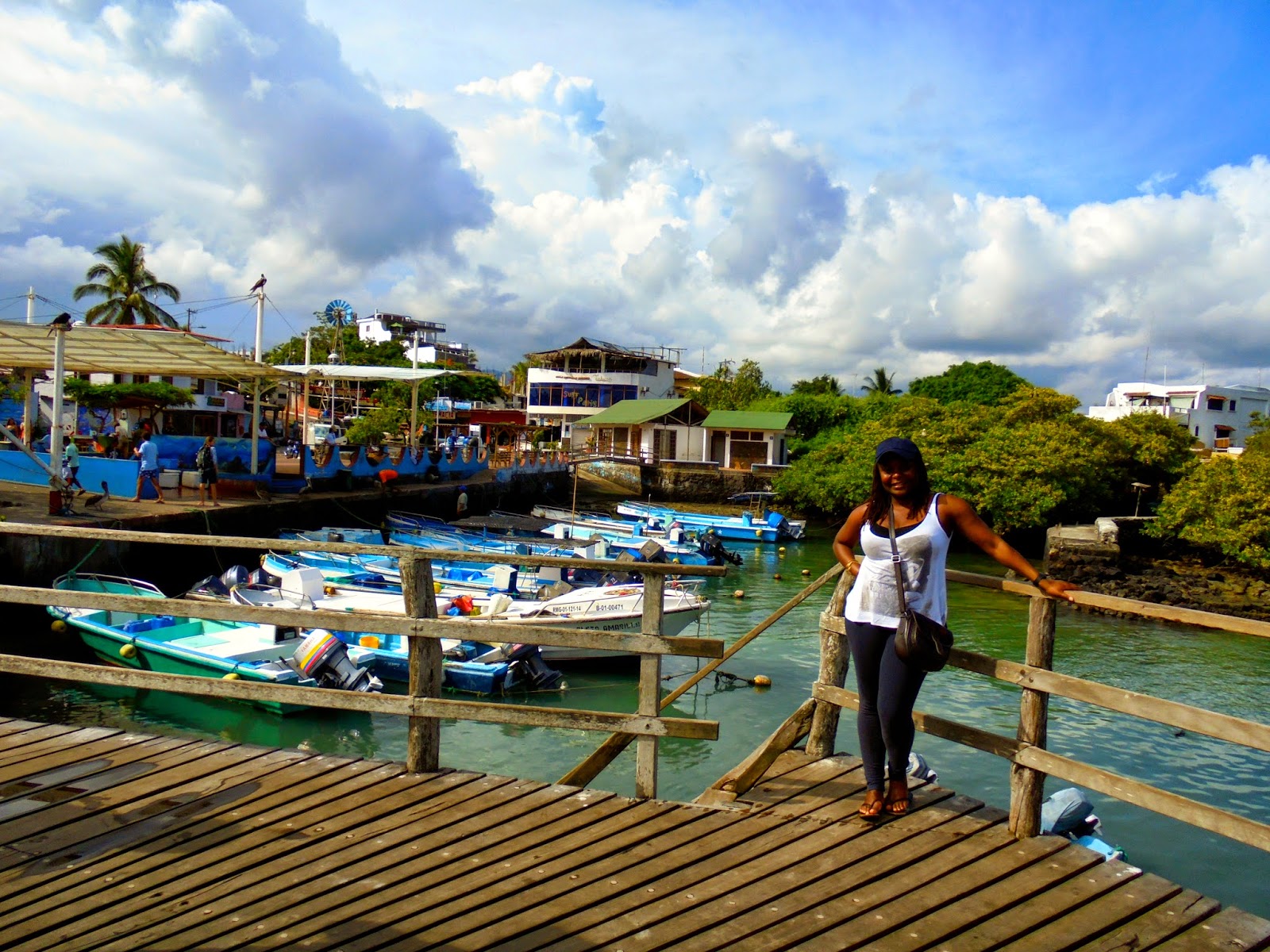 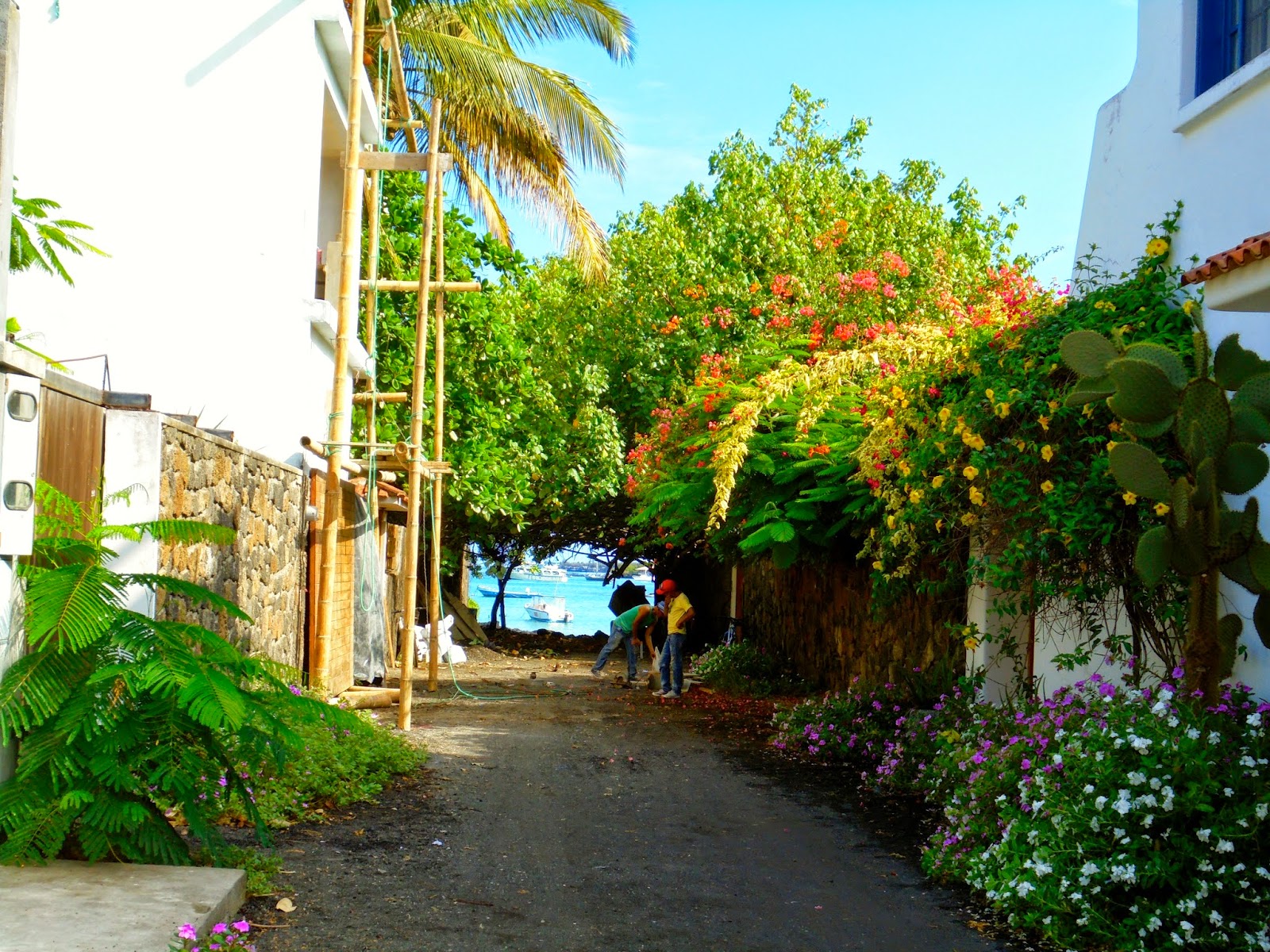 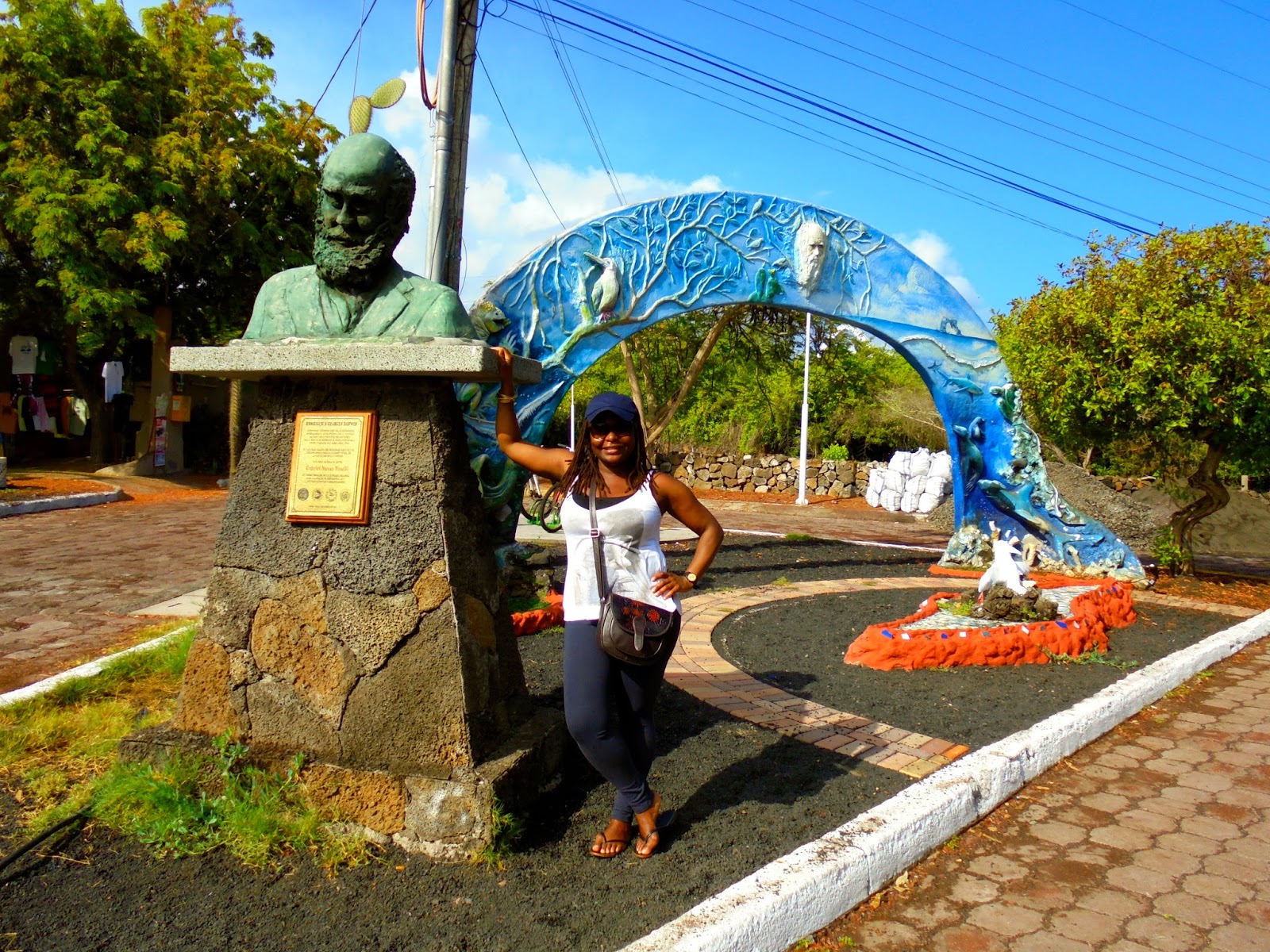 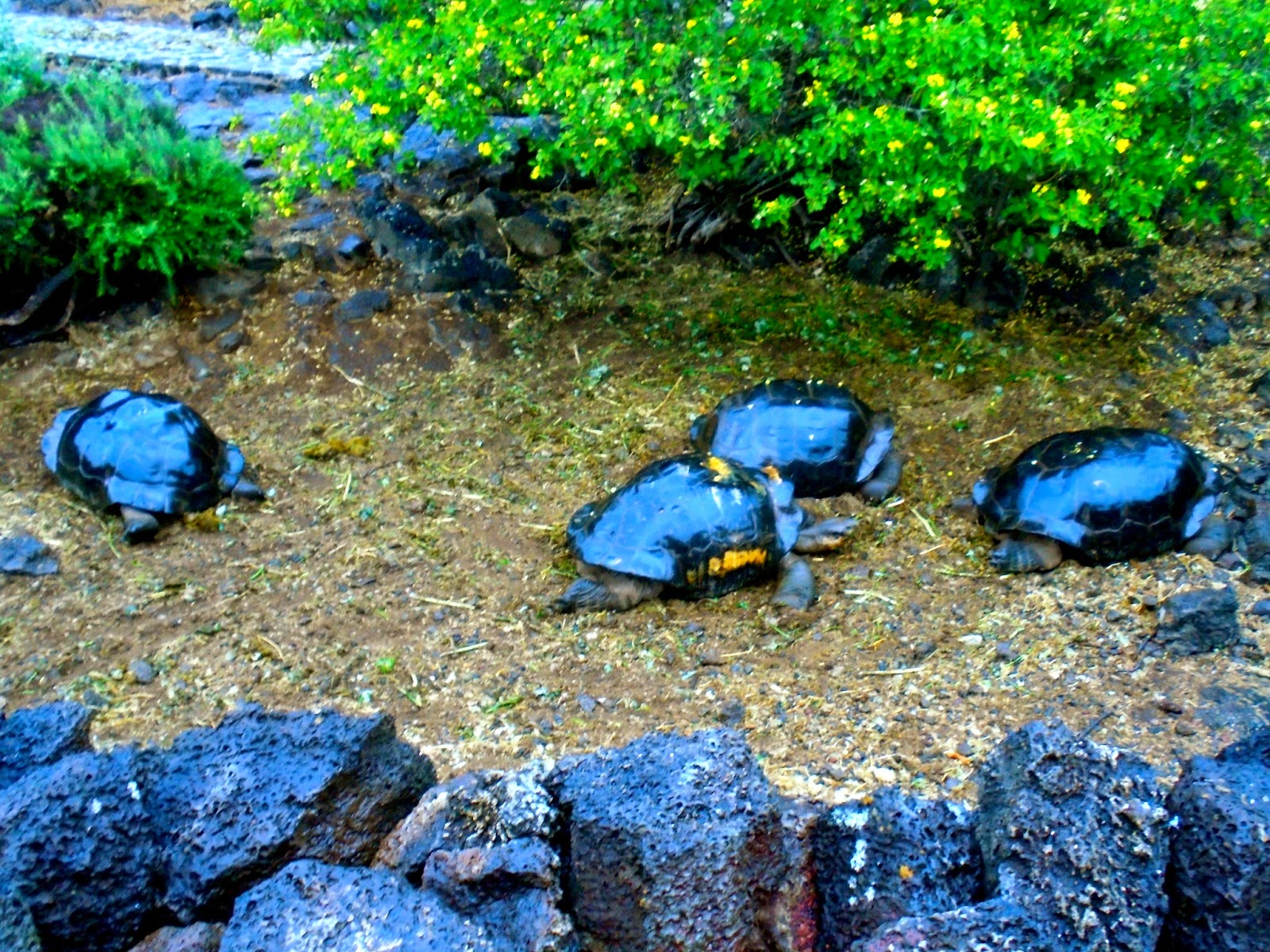 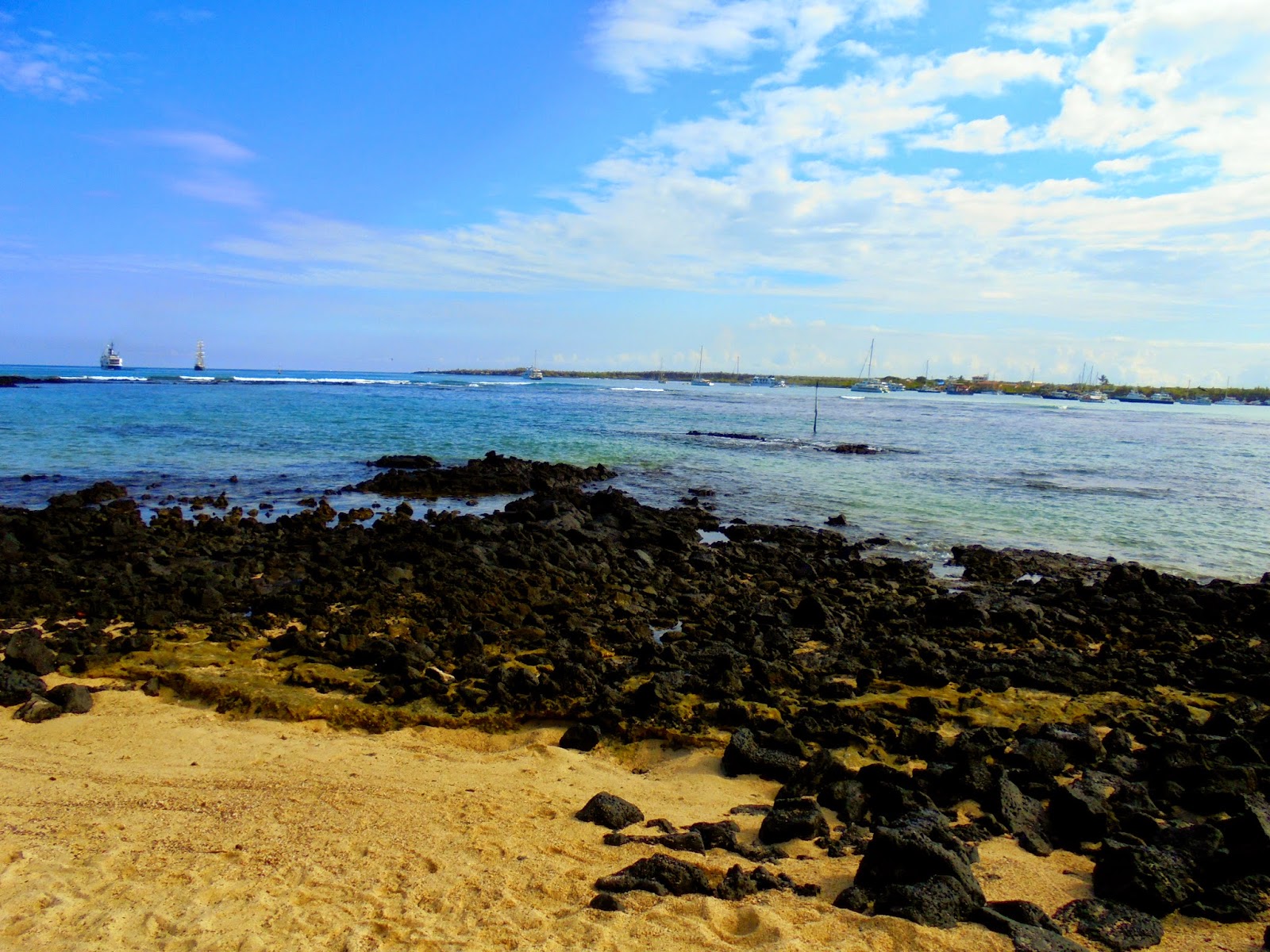 So what I learned about the Galapagos islands is that hundreds of years ago the islands were not inhabited by anyone but animals. A lot of pirates actually used to dock here to hide, rest, fix their boats or replenish their resources like food. The Spanish who landed here killed a lot of tortoises for food and highly diminished the population of the animals in the various islands they landed on, they were never interested in settling here because they were in search of gold and other treasures that the Galapagos didn't have. Right now there are various breeding projects aimed at increasing the number of tortoises on the islands.

Contrary to what I thought, people actually do live on the islands of Galapagos and they even practice farming. I had always assumed that no one is allowed to live there so that the animals on the islands can be protected but look how wrong I was. To live on the island you actually do need a resident permit even if you are Ecuadorian. The people whose families moved here years ago are residents so they can live off and on the islands without any issues. It's actually funny when you hear the islanders talking about Ecuador like its a totally different country, maybe the fact that its not physically linked to Ecuador makes it appear so.

That's it folks, my first day in the Galapagos has gone pretty well actually minus the heat, It is HOT over here and humid although the humidity is not too overwhelming. At night it feels really good to walk around because its cooler. People here are super cool and there is definitely a shortage of sleazy men which makes it awesome! no one disturbs you while walking around and its very safe, the locals have been telling me that safety is one of the big pluses of living here so that makes me feel so much better.
- March 16, 2015