Yup! you read that right I am back in Quito. I suppose I should let the cat out of the bag now and let you know what I have been up to. The plan was to go to Bolivia after Peru but let's just say a lot of things that you were not privy to, have been happening behind the scenes and now I am ready for the big reveal. Well...................okay, I am a bit nervous and shy revealing this but what the heck. My plans changed because of a certain special someone, somehow he managed to wiggle himself in my heart and secure a cozy spot. That's what led me back to Quito and now I am living in domestic bliss with him.......okay that last part sounds cheesy right?

Apartment hunting in Quito turned out to be more stressful for me than I had anticipated and I was almost at the point of giving up, mark you this is only after one week! I told you, my impatience will be the death of me one of these days. I have to admit I threw several fits but my sweet guy with his awesome patience took it all in stride and was so chill to the point where I was annoyed, yes! really, I was annoyed (high strung anyone?). Anyway, these are some of the obstacles that we were coming up  against:

A lot of Ecuadorians rent out apartments for a minimum duration of one year and since we are renting for a short period of time, no one wanted to rent out their apartment to us. I do understand their reasons but it was very frustrating especially after coming across several good potentials only to be told we needed a one year contract.

I found myself scouring the classifieds relentlessly and calling so many numbers to the point where I developed a spiel to rush through the calls. Some people I called would be excited at the prospect of a potential new renter until I showed up at their doorstep for a viewing, only to be given a lame excuse that the apartment had just been rented out. Hmmm? that's not what you said an hour ago! This one lady was nice on the phone till I got to her apartment and as soon as she saw me she didn't even bother with a hello before dismissing me and telling me that the apartment had just been rented. I was so pissed off because I knew she was lying so I told her it's not true because 10 minutes ago I was talking to the owner of the building to get directions and he never mentioned anything about the apartment being rented out already. I took out my phone and told her I would go ahead and call him right there and then. She changed her tune pretty quick but was still rude. She didn't even want to show me the apartment but instead pointed upstairs and told me it's on the top floor. I could not believe her rudeness and even though I did view the apartment I knew I would never want to live there if those are the kind of people I was going to be dealing with. I had three such incidences, make your own conclusion but I believe the color of my skin had a great deal to do with some of these shady attitudes.

The other obstacle we were dealing with was getting a reasonably priced apartment in the area we both wanted. We needed to get something close to my boyfriend's job and close to my school which are both around the trendy La Mariscal area. The apartments I was coming across on airbnb were beyond our set budget, we even tried checking out suites in hotels but we found nothing within our budget and the ones we could afford were already rented out. The very cheap apartments were located way too far to be convenient to both of us so that was a bummer, they were either way north or south of the city and the commute just wasn't worth it.

I did find a good apartment via airbnb in a conveniently located neighborhood but the owner was a bit weird and I decided to keep looking for other alternatives. On airbnb I have my picture on there so she knew how I look like but she wanted to see pictures of my boyfriend as well before agreeing to rent to us. She was also adamant to know what nationality he is, really? does that change the value of the money you will get from us when we rent from you?! weird! I just did not understand it.

I was at my wits end but as luck would have it, my very sweet host who I had stayed with my first time in Ecuador and in whose house I was staying in until I found something, came to the rescue. She remembered this one area from 10 years ago where there were furnished short term rental apartments, I was quick to go check out the place as I crossed my fingers hoping that the apartments would still be around and available.

Fortunately for us the apartments were still around and not only that but they also had an available one ready to be rented out. There was a one bedroom apartment available with some furniture so we wouldn't need to buy a lot of stuff, just the basics. I was quick to jump on it and everything was settled pronto, we were ready to move in and I couldn't be more relieved especially after all the drama! Anyway, let me introduce you to our apartment. It's nothing fancy and it could use some sprucing up but it will do for the time we plan on being in Ecuador. By the way, the location could not have been better as it's close to what we both want.

That's the apartment building, the neighborhood is pretty chilled out and I like it. 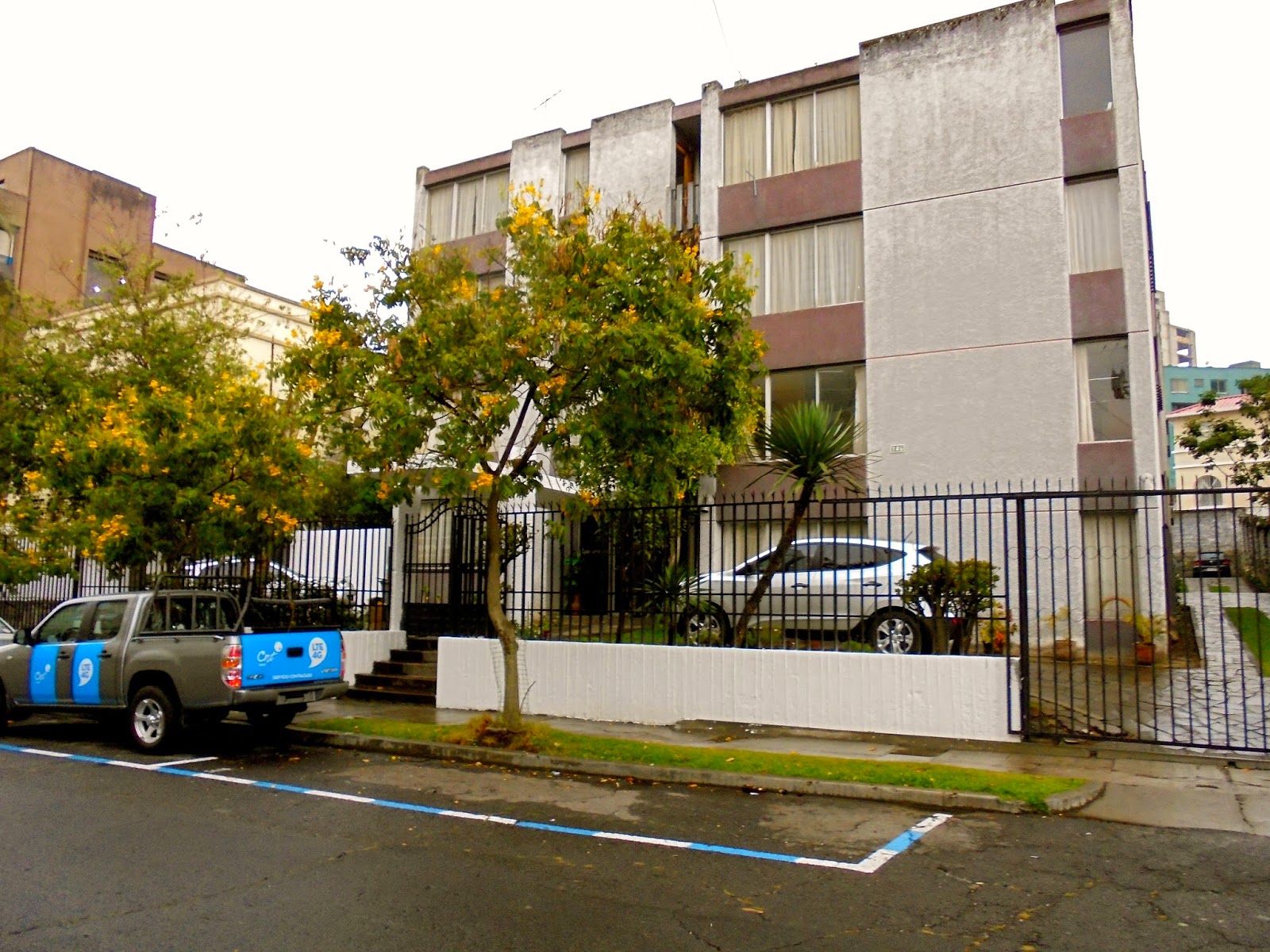 The main gate to the apartment building 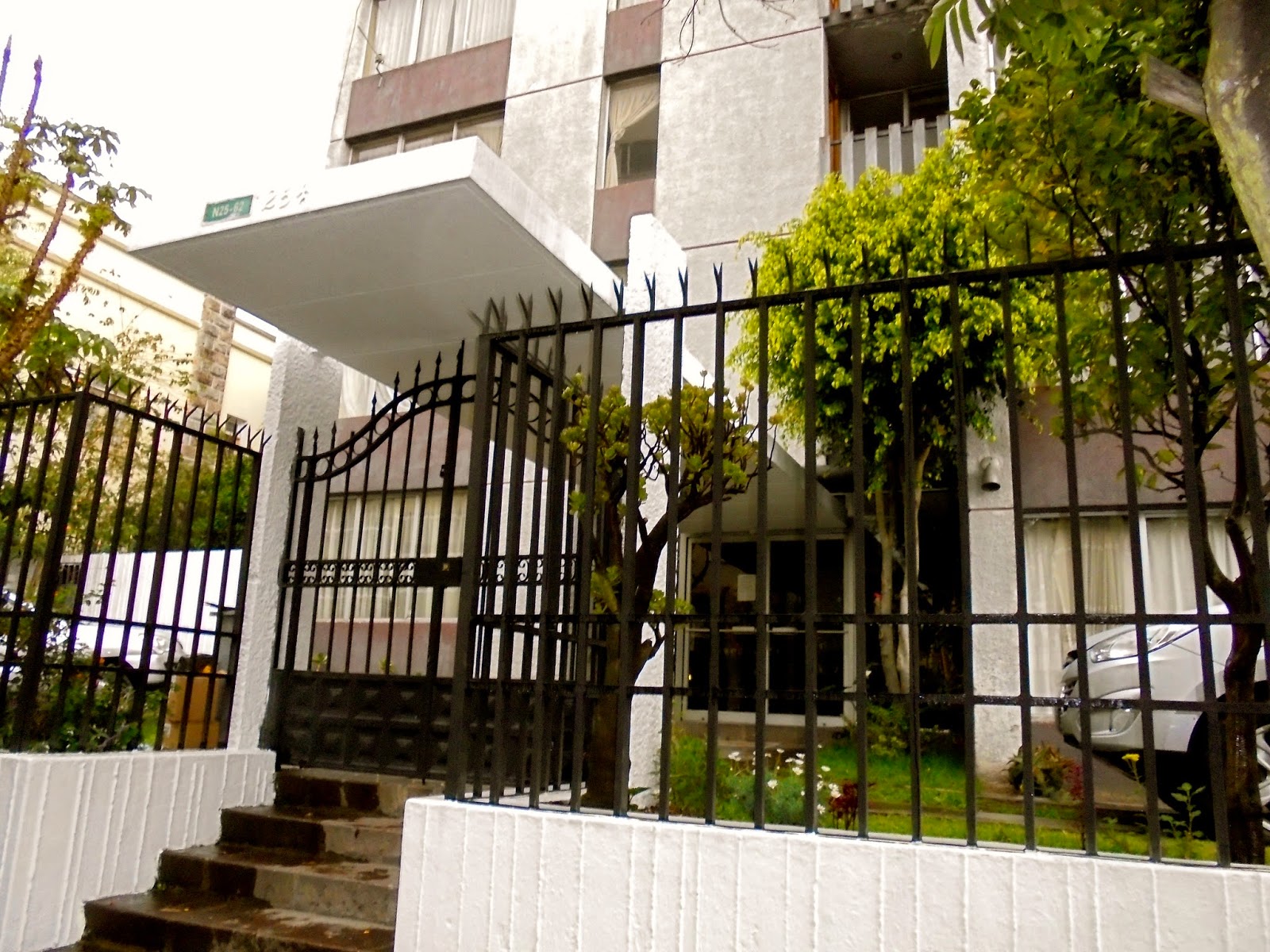 This is the main reception area of the apartment building where you can watch TV and hang out. 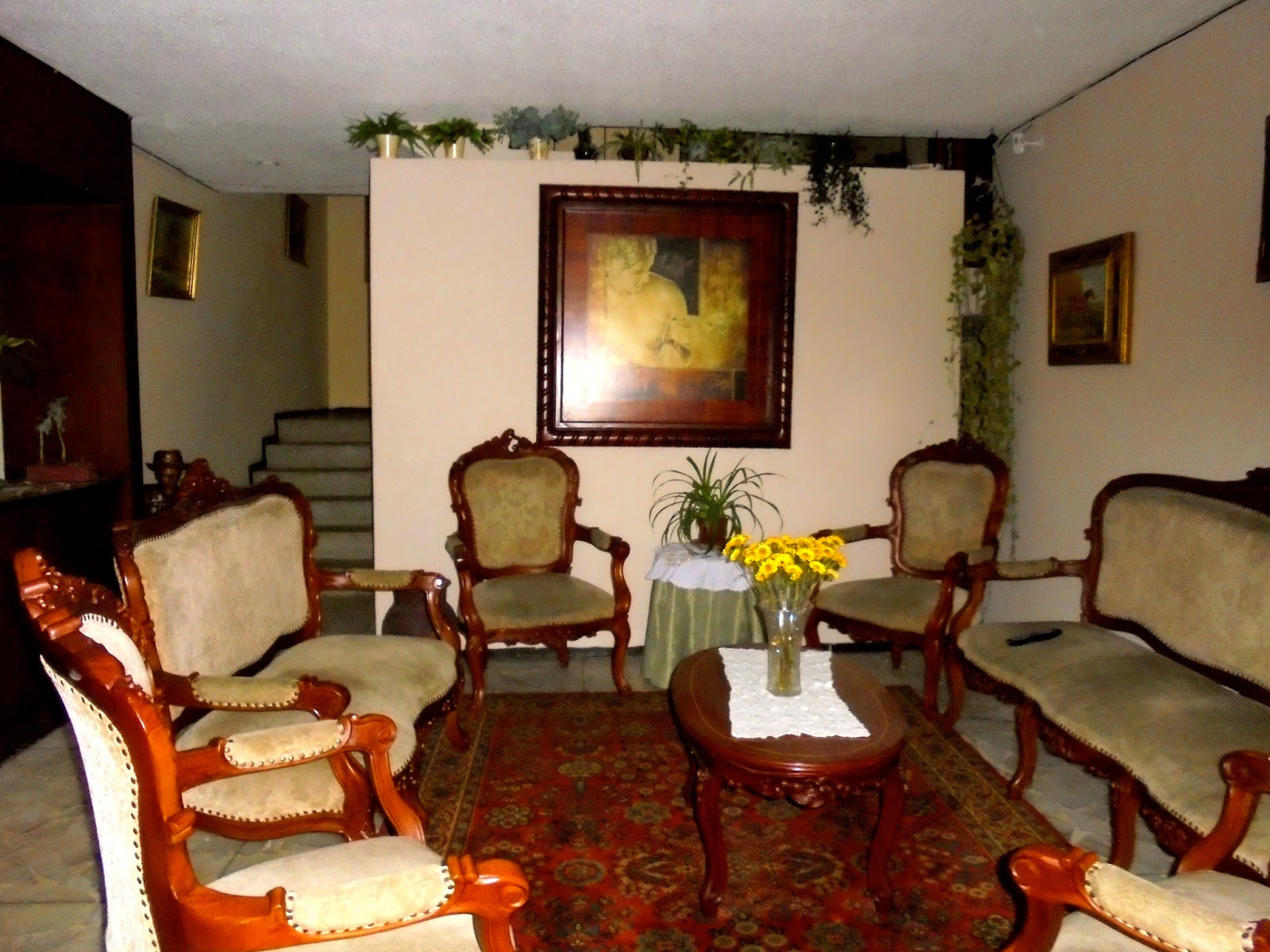 The main entrance to the apartment and a peek of the dining room to the right. 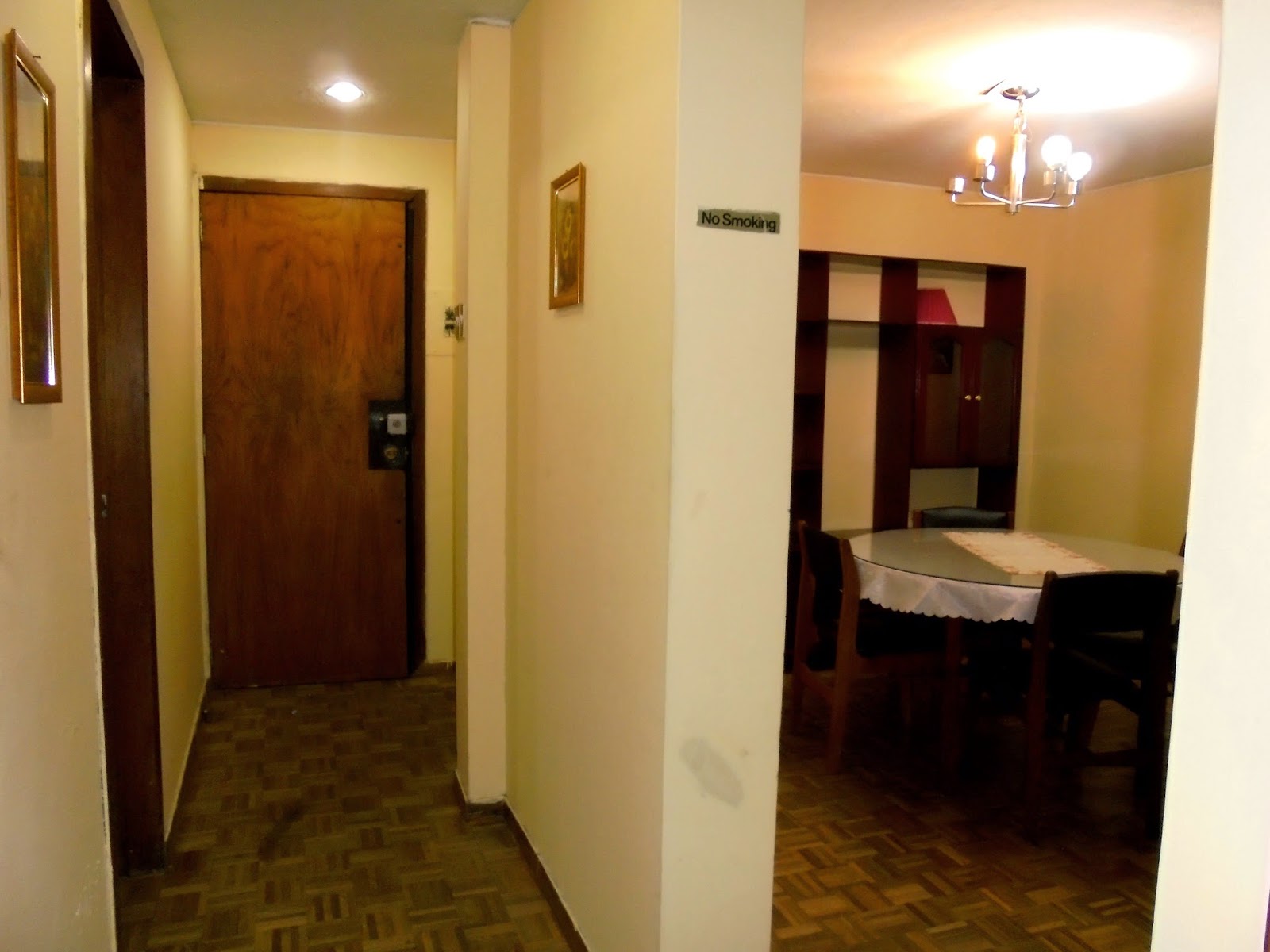 The living room which has a door that leads to a backyard. 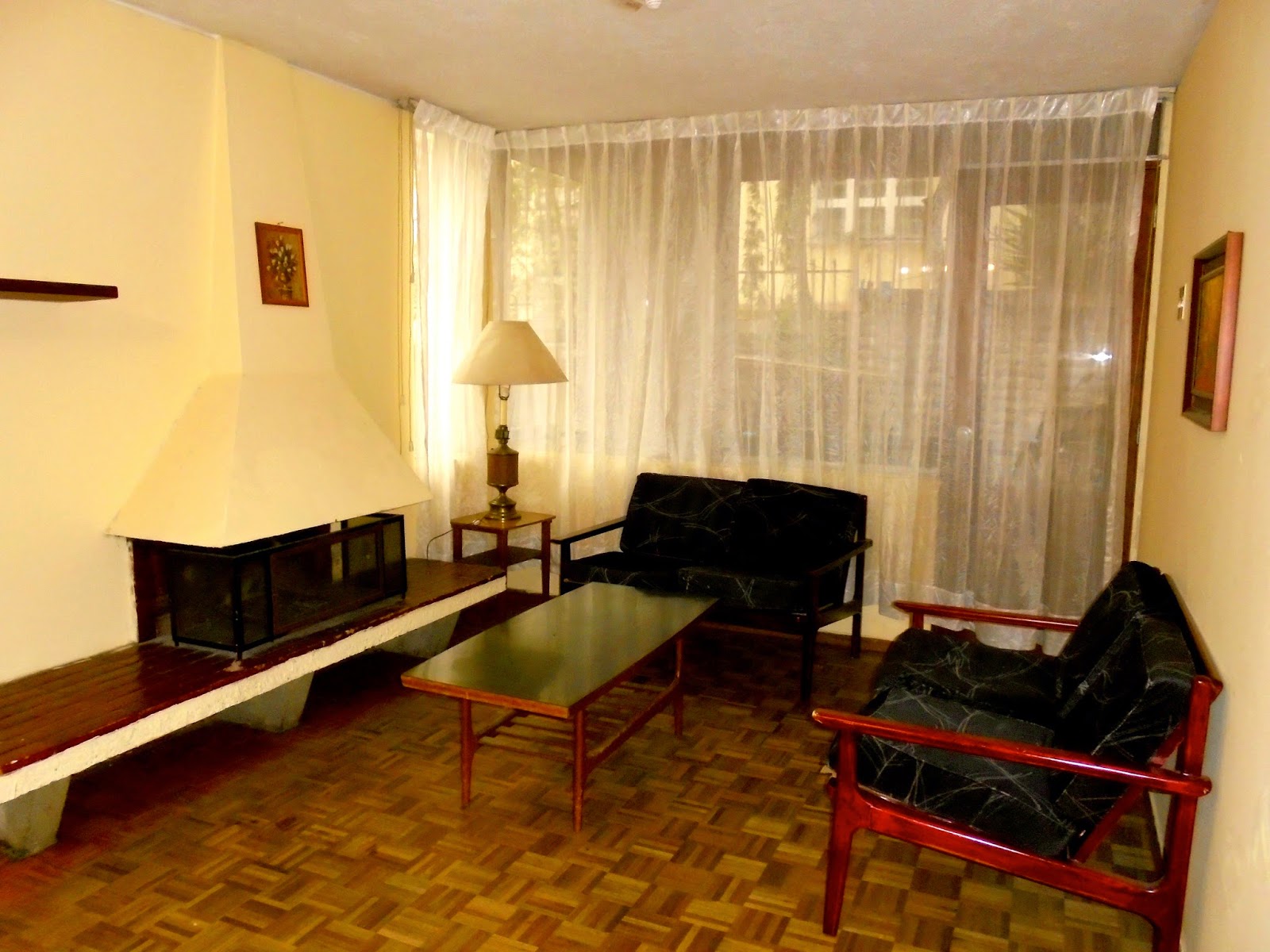 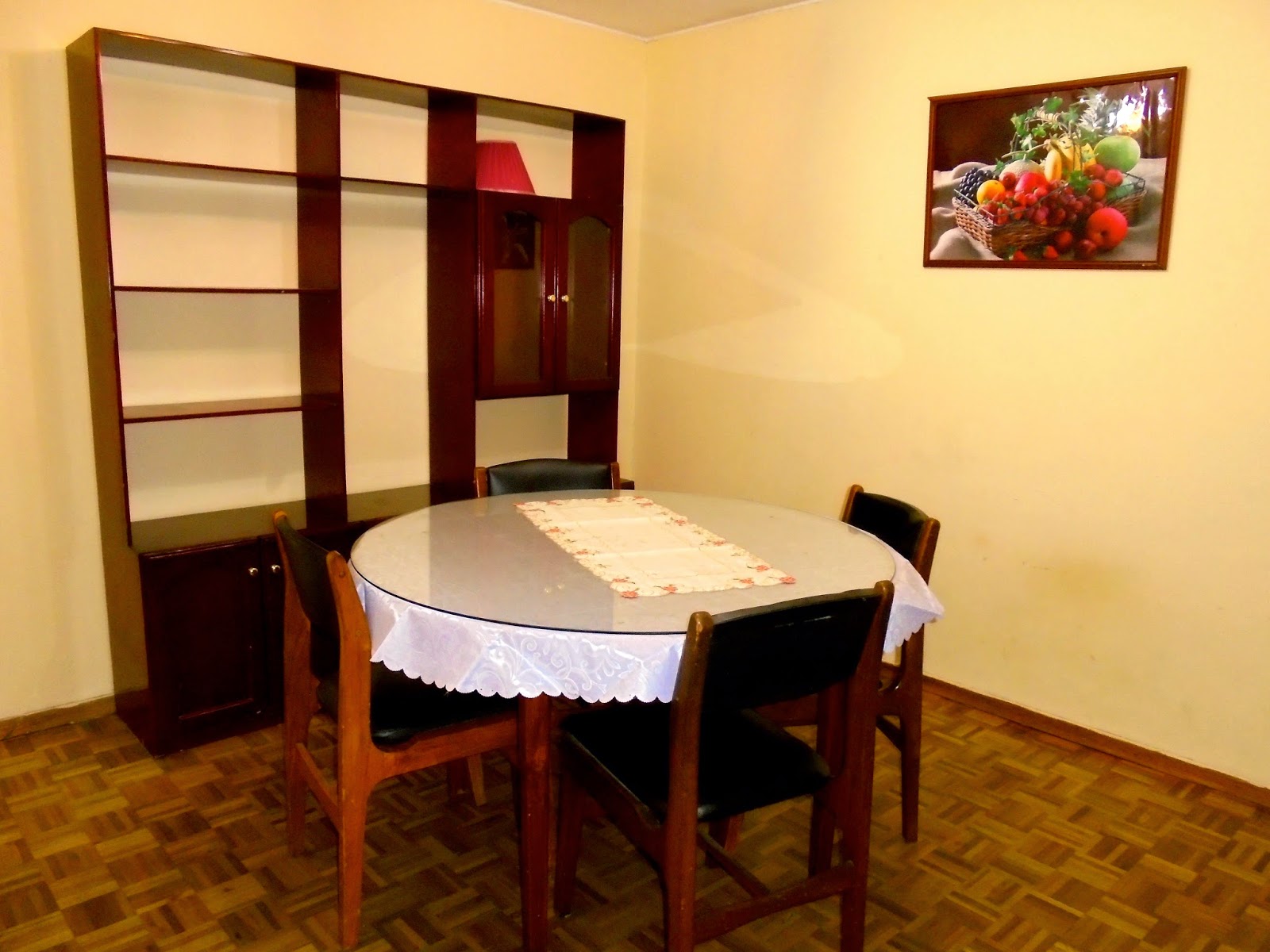 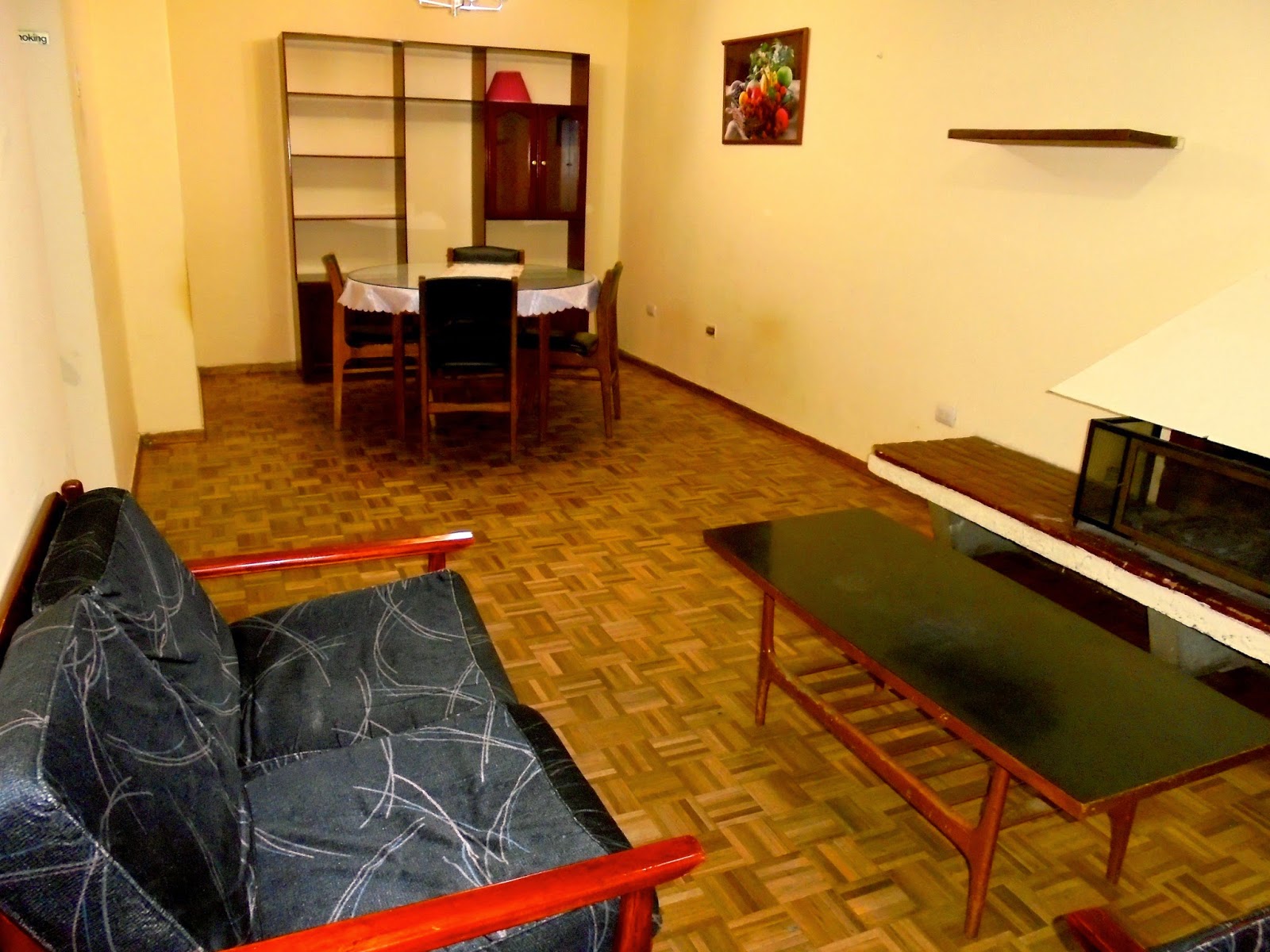 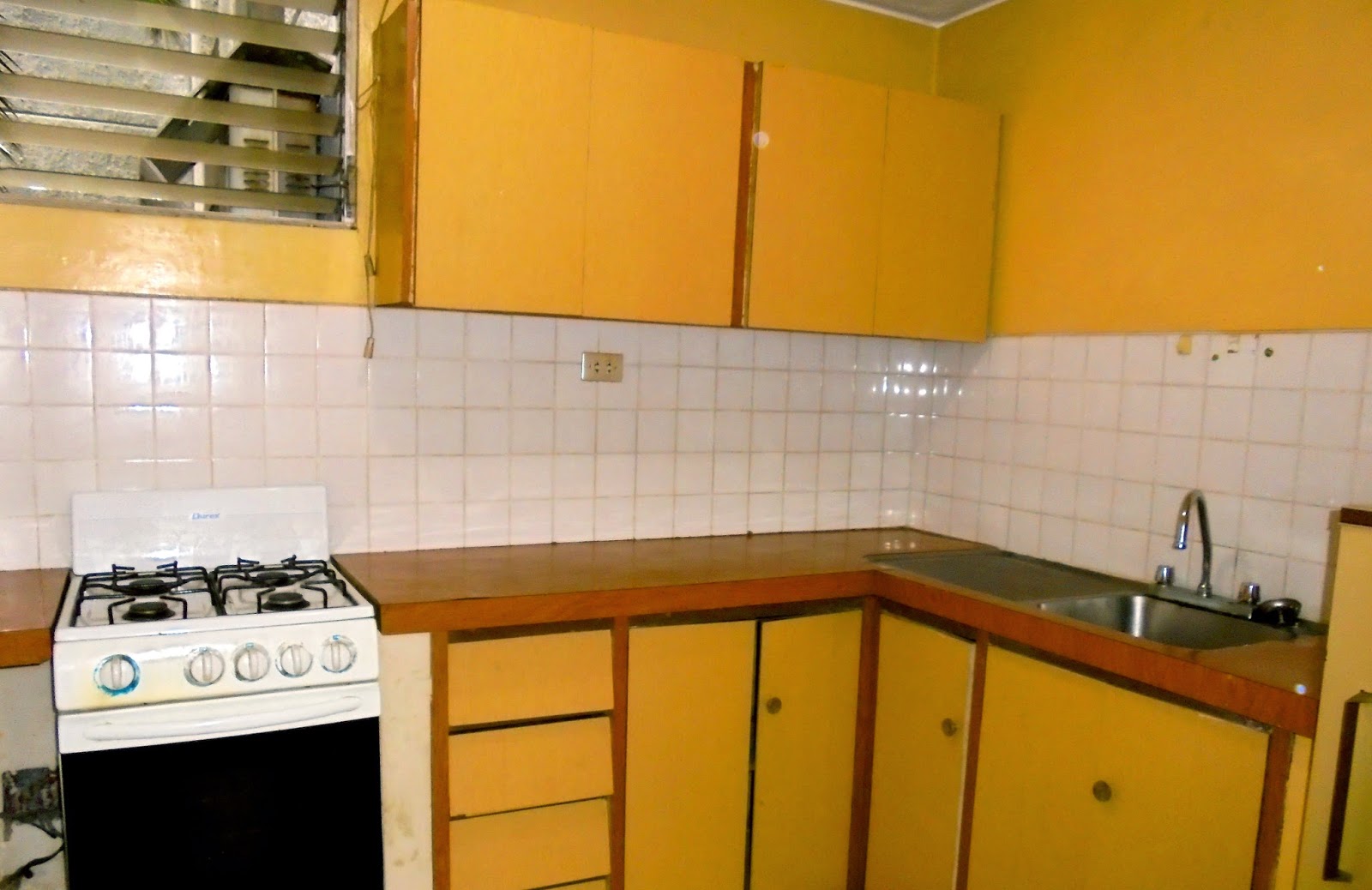 Bathroom, the toilet is discreetly tucked behind a corner below the window. 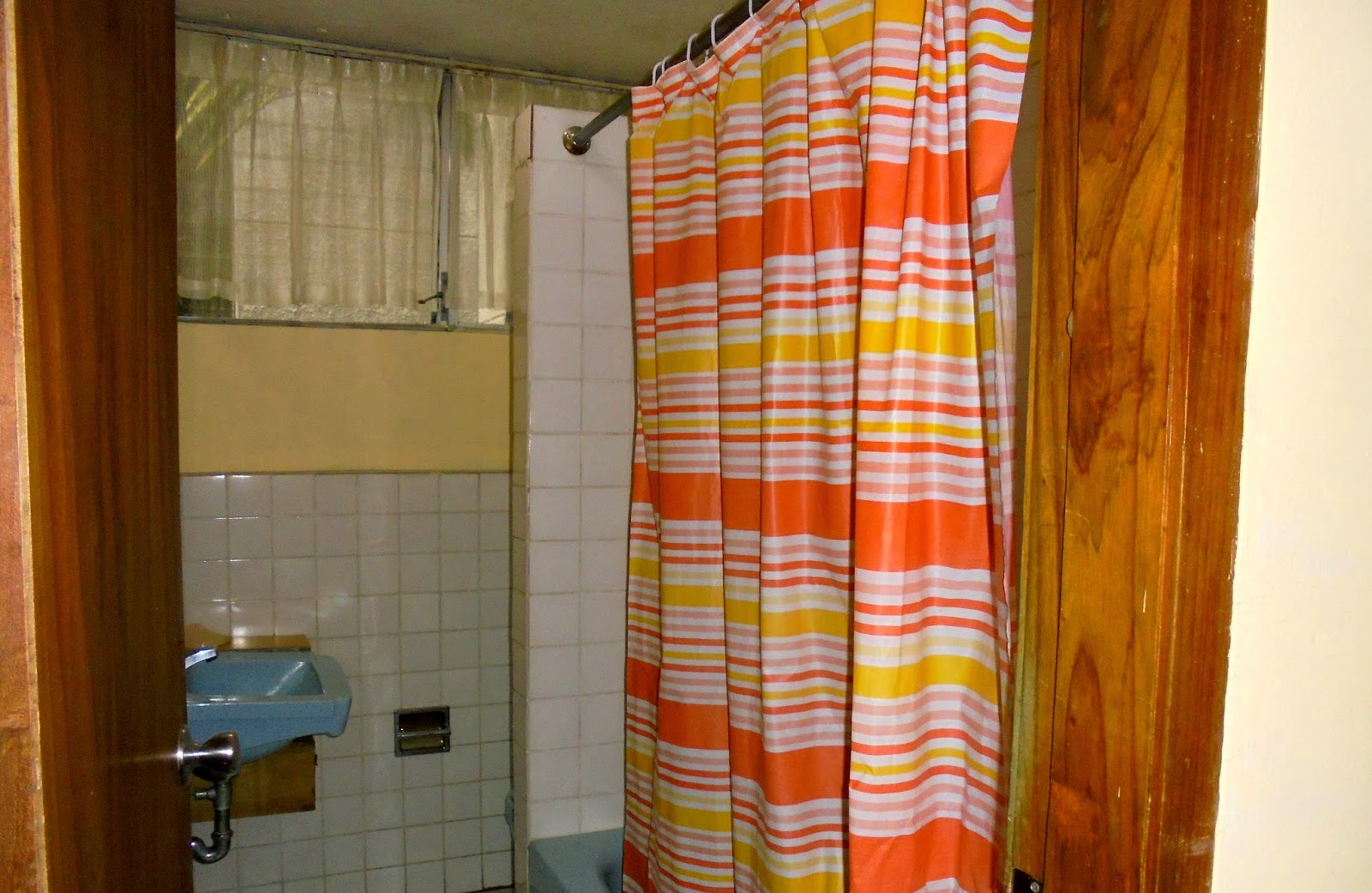 Us.............remember the Dominican from this post? well, that's the guy. Funny how things turned out huh? I never imagined we would be where we are now but hey, we are here. 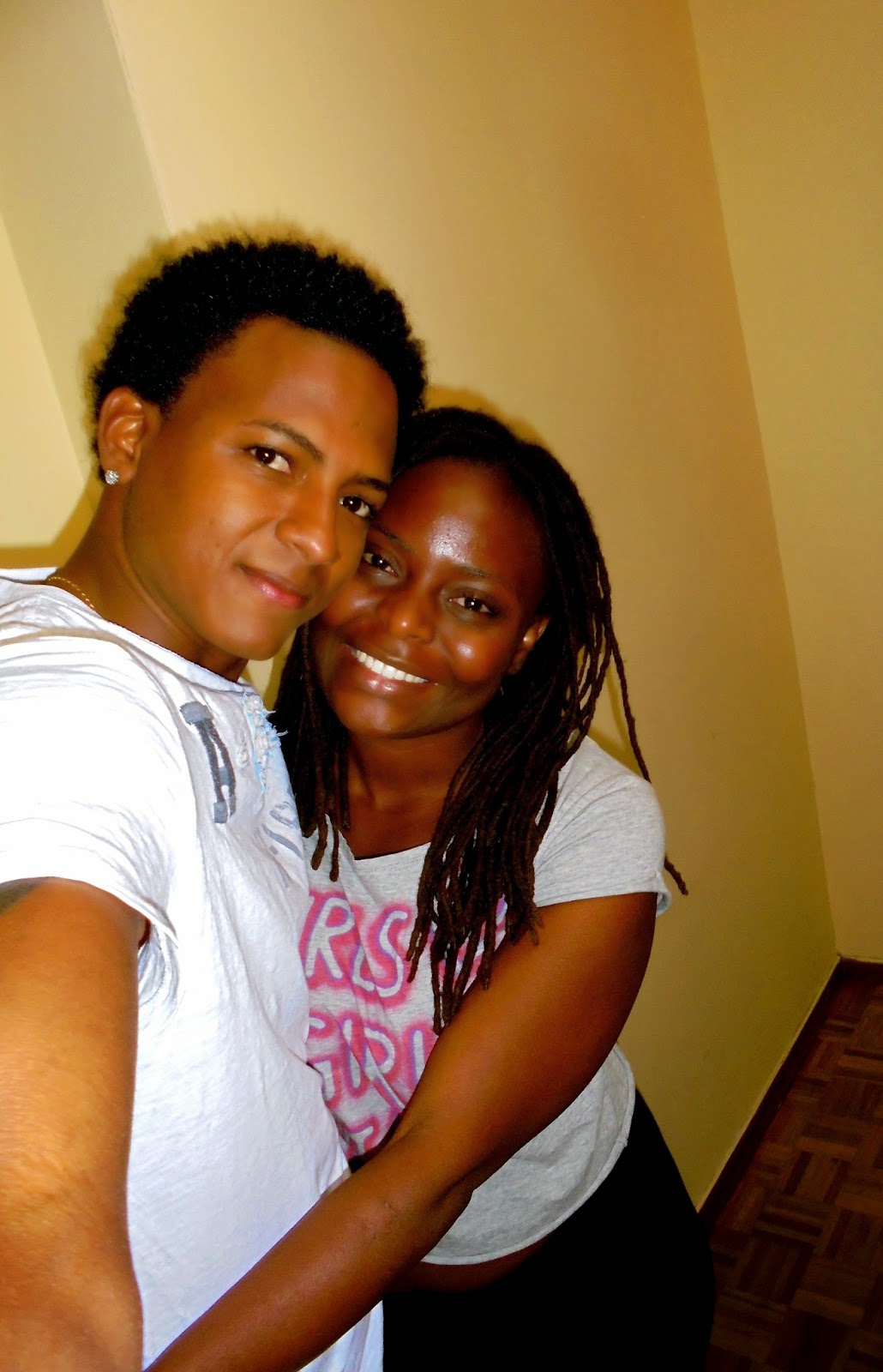 That's it folks! what an experience it has been looking for apartments but I am glad it's over now. Let's see where this new and different adventure will lead me, sometimes you just have to take certain risks and if things work out then it's well and good. If they don't then at least you will know and move on without having a lot of "what ifs."

Tips On Apartment Searching In Quito:

Buy the newspaper called El Comercio which has the classified section that lists a lot of apartments for rent. The best days to buy this paper is on Saturday and Sunday, actually the Sunday edition has even more listings.

Some apartments will come with furniture so if you come across an apartment that indicates amoblado or con muebles then that means it's furnished. Some will not indicate this so you can also ask when inquiring about the apartment.

Before you get excited about an apartment make sure the rental contract matches with your needs. Ask what the minimum rental period is, this should be one of your first questions.

Feel free to bargain the rental price, some people will budge and lower it. I managed to get our rental price reduced by $50, it never hurts to ask.

If you are in Quito and want a short term rental with basic furnishing, check out the area around Cristobal Colon and Placido Camaaño. The apartments are on Placido Camaaño and there is only one way you can turn on the street from Cristobal Colon, most taxi drivers will know where this is and the street itself is not that long so you can go from building to building asking for rentals.

You may need to put down a garantia which is like a deposit and this will be returned to you after your stay if there was no damage to the apartment.

You can pay cash but make sure you are given a factura which is an invoice. Always have written evidence just in case. If there is a contract in place it will be in Spanish, if you don't understand most of it have someone go over it and explain it to you if they are able to do so in English.

If you don't mind commuting then there are many cheap apartments located way out in the southern and northern parts of the city. You will find a lot of them listed on the classifieds.

Being able to speak and understand Spanish will be very helpful while looking for apartments especially when you are going through the classifieds and calling people. My Spanish classes are paying off!