For Those I Met In Cusco

Well, my time in Cusco is done and I can't believe how fast time flew. My initial plan was to stay in this city for a month and that month is up so it's time to move on and seek other adventures, feels like yesterday when I was trying to get settled in Cusco and it's now time to say goodbye.

Even though my stay here has been pretty short taking into account my jaunts to Lima and Puno for several days, I managed to meet some really awesome people who made the city fun for me even though I have to confess that Cusco for some reason never really grew on me. I have nothing against the city but to each their own right? some places just don't rub off on you like others. Anyway, enough of that and without further ado I will introduce you to those who made my stay here worthwhile.

The Staff At Aloha Tiki Bar - This one guy randomly started chatting me up on the street and invited me to come watch him play at a bar near where I live. That bar is Aloha Tiki, in San Blas neighborhood. He was very earnest and his friends who were with him kept telling me that he is actually pretty good so I should really check his act out. They all looked artsy and hippie and were very sweet so I promised to stop by the bar later on in the evening to check out the guy's act. I did keep my promise but the guy was a no show - I later came to find out he had gotten too high and missed his act (long story).

Anyway, all was not lost because when I showed up at the bar the owners were pretty cool and they invited me to join them in a game of Uno as they waited for the bar to fill up. They were super friendly and we ended up having such a good time that they invited me to stop by again. Let's just say a lot of my evenings were spent at Aloha Tiki hanging out with these folks. Every time I showed up everyone would stop what they were doing and they would each come to give me a hug, you see the lady next to me in the picture below? we ended up bonding really well and every time she would hug me she would say, "Ayyy! please don't go, stay in Cusco longer" (I am translating this in English) she used to say this as my departure date neared. She was super sweet and we had really good conversations. The dudes were such gentlemen and one of them actually took it upon himself to show me other parts of Cusco I hadn't seen, during his day off. These folks were just the best and I will remember them fondly when I think of Cusco. 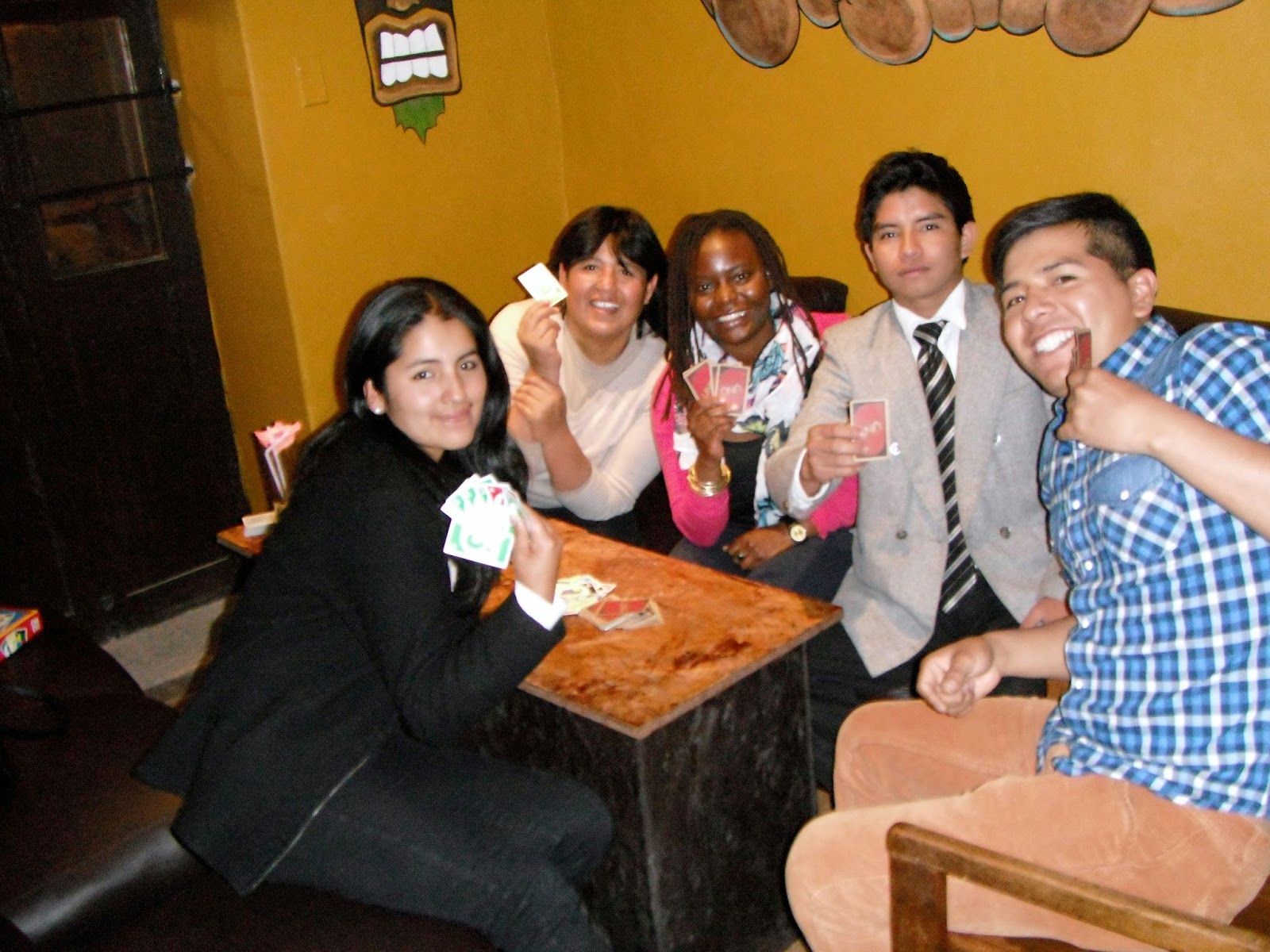 My Spanish Teachers - These two were my Spanish teachers, one was my grammar teacher while the other was my conversational practice teacher. What can I say? I developed a bond with them and they became more than my teachers, they were more like my friends and we had many conversations about our personal lives. They were always so much fun and made my class time exciting given the fact that I was taking 4 hours of Spanish everyday. On my last day of class there were many hugs given and we exchanged contacts, they each separately asked me why I couldn't stay longer. It was really touching. 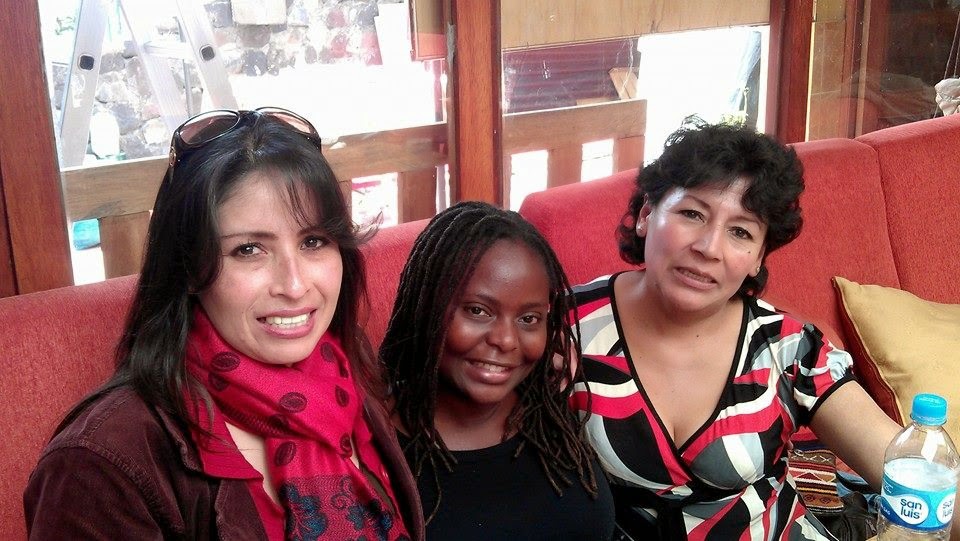 My Housemate - He is from Israel and we met in the house where we were both renting rooms and we just clicked. We used to hang out a lot after my classes and we would take walks around the neighborhood as he showed me all these different places. He is such a cool, funny guy and I enjoyed his company so much, we used to talk about a lot of stuff and it was always such fun. He left Cusco before me and I missed him a lot especially those first few days but we continue to keep in touch. When he left he sent me a message on whatsapp saying he was glad to have met me and that I made Cusco a nicer place for him, Aaaw! likewise my friend, likewise. By the way don't let his serious look in the picture fool you, he is a really sweet guy and has the cutest smile which he needs to show more often in pictures. 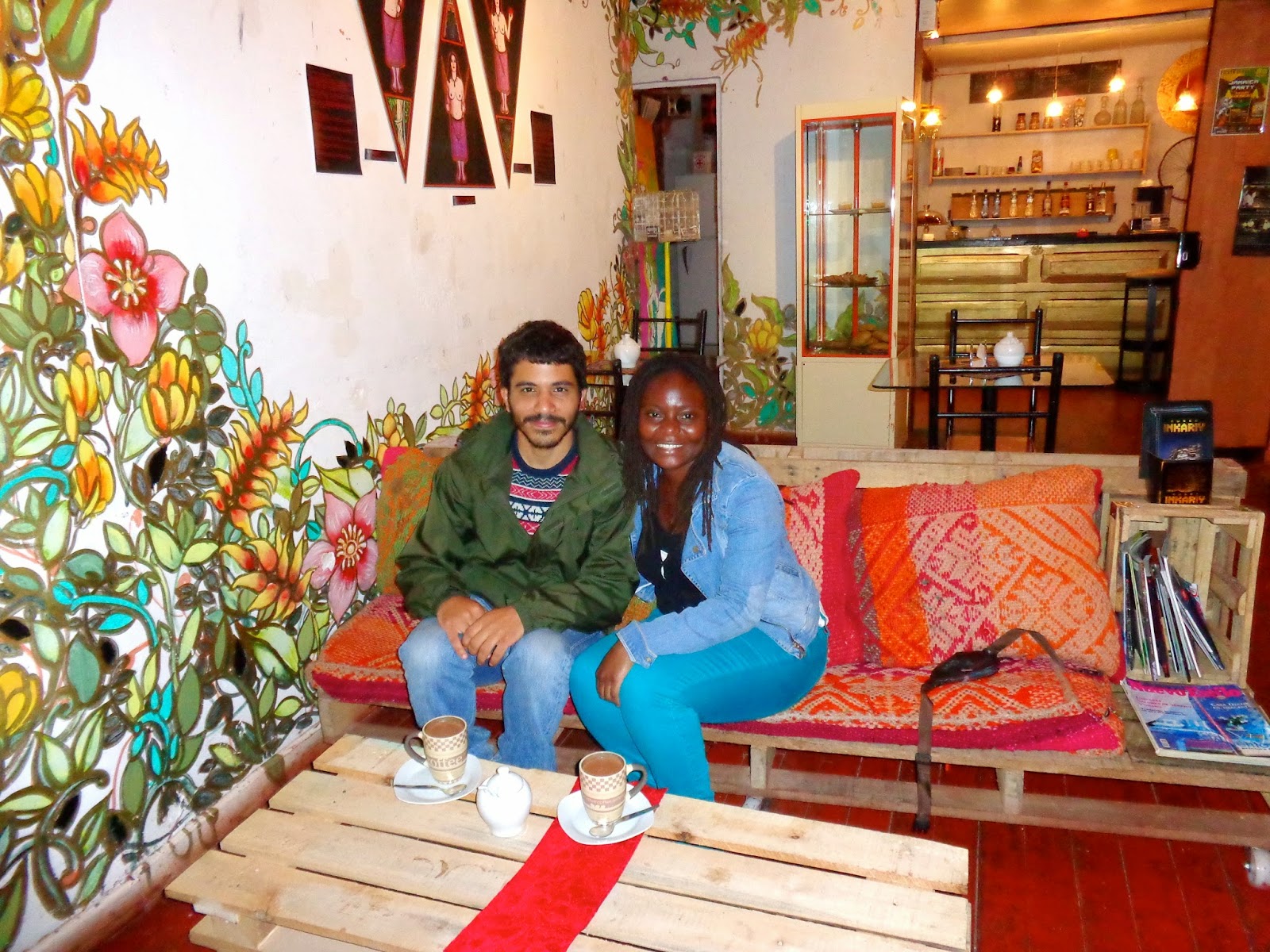 My Favorite Juice Lady - I met this lady when I was with my housemate, he bought some juice from her and she was very chatty and friendly. I bumped into her on the street a week later and I didn't recognize her but she remembered me and she said hi while engaging in some small talk. She was really sweet so I found myself going to her fruit juice stand every evening to get some nutrition plus engage in conversation. It became routine and every time I showed up she would greet me with a wide smile and lots of enthusiasm then we would both tell each other how our day was as she made my usual drink. She used to compliment my hair all the time and would tell me hers is thinning and falling out due to stress, I would tease her and say that maybe she needs to fall in love and the stress would go away, she would laugh so hard at this. When I went to see her one last time she reached over the counter to give me a big hug and told me "until we meet again" she said she didn't want to say goodbye because saying goodbye is final and she hopes to see me again in future. 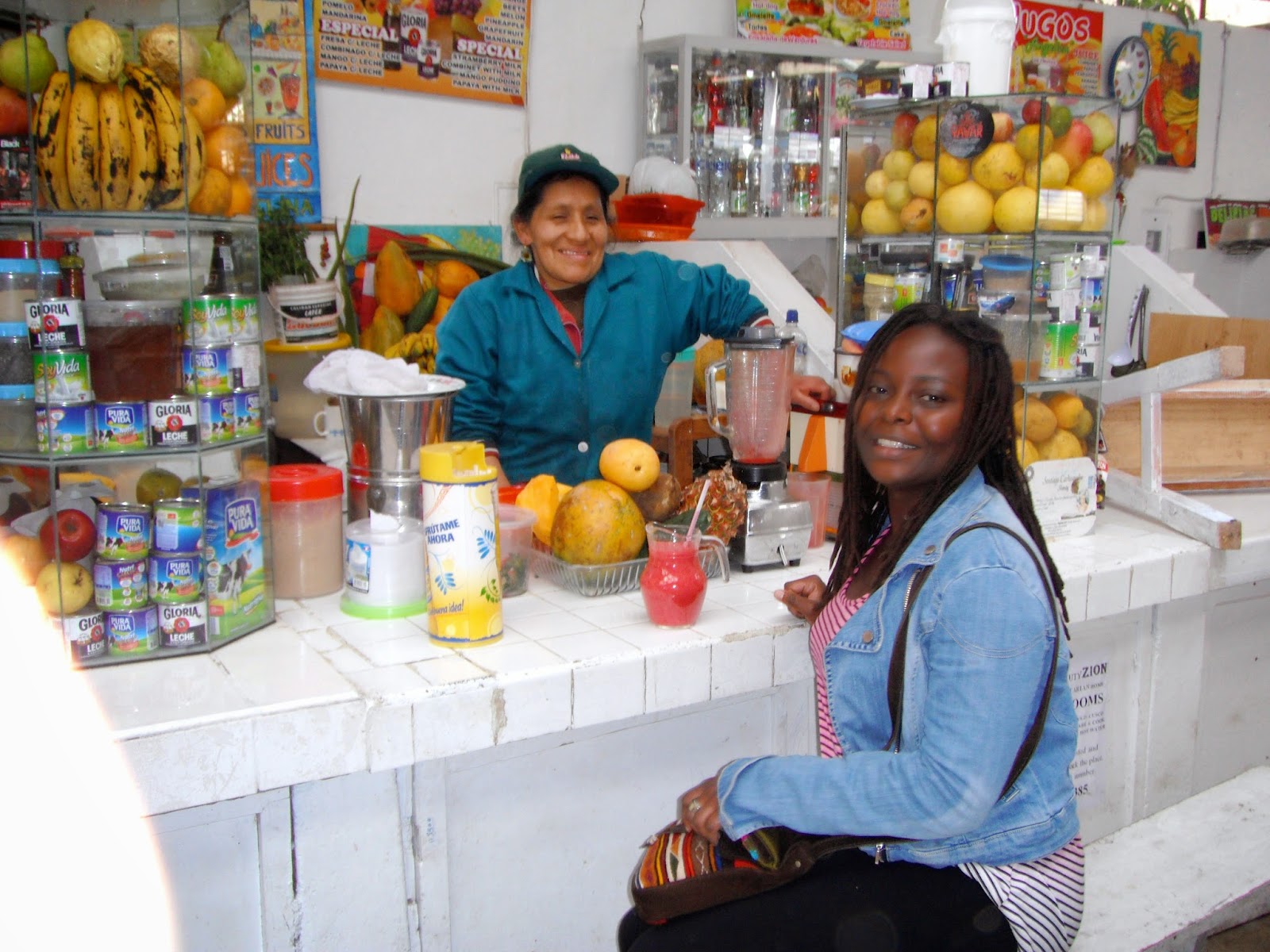 Last but not least, are my hosts at the house I lived in. For some reason I never managed to get a picture with them which is such a pity but they were really cool and great people. They were an English couple and the guy was the funniest dude ever! really entertaining and always ready with some funny anecdote to get you laughing. They definitely made my stay in the house better than I expected and I am glad I got to meet them.

That's it folks, I am grateful for the amazing people I have met during my travels so far and I hope I will continue meeting more because it always adds more fun. Once again it's time to pursue new adventures and see what's out there to be experienced.

A lot of the indigenous women I have seen over here have really long beautiful thick hair that's usually braided down to their backs, I don't think they cut their hair. I have seen the same with men too especially in Ecuador.

I really don't know what's up with Lima but every different room I have stayed in has had a moldy smell to it.

As I mentioned before, Cusco has a lot of stray dogs so of course it's not uncommon to see a lot of dog poop on the streets. When it rains guess what smell lingers in the air? yup! you got that right, dog poop. This is especially common if you pass an area where the dogs are mostly concentrated which most of the time happens to be in residential neighborhoods.

Now imagine climbing the many steep steps you will find in Cusco and as you are panting with your mouth open, you are hit by the stench of dog poop. Uurgh! disgusting!

By the way if I come across as very negative in regards to Cusco, don't pay me any mind. I don't mean to paint it as this dump because it does have it's good parts too.

As December nears I am getting a little bit more anxious because it means my adventures may soon be coming to an end. I have to think about applying for jobs and figure out what state I want to settle in because I want to relocate to a different state. Le sigh! let me not even think about that now, let me enjoy this time I have right now.