All good things must come to an end unfortunately, today is the last day of my stay in Puerto Rico and I wasn't up to doing much, but I decided to go back to the Old San Juan historic district and check out more stuff at my own pace. I got an Uber ride from where I am staying at and started my exploration from Plaza Colon which has now become a familiar landmark to me. By the way, lot's of tour companies also arrange meet ups at this plaza and there is a fruit stand at the plaza where you can also get the map of the city to guide you around. I grabbed one of those maps and started my adventure of the day. In no particular order, these are some of the sites that I came across.....

Altar de la Patria - This monument can be found in the capital district (the capital building is right behind) and represents the three ethnicities of Puerto Rico: Taino, Spanish and African. 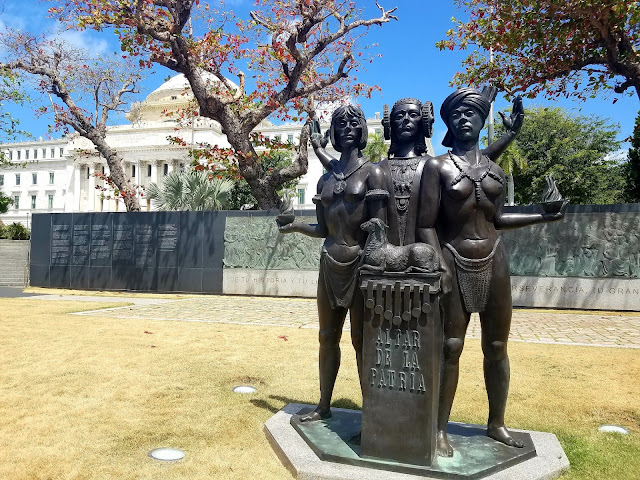 Old San Juan Cemetery - located between Castillo San Cristobal and San Felipe del Morro, many prominent Puerto Rican figures are buried here. The view is lovely but this is as far as I got. 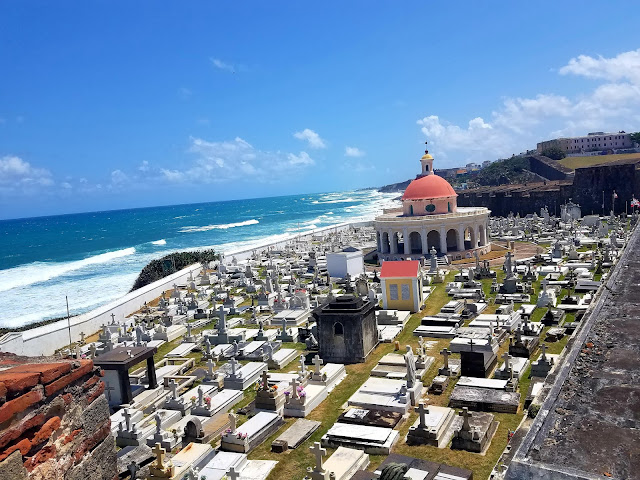 La Perla - Daddy Yankee and Luis Fonsi made this neighborhood famous when they shot the video for their song, despacito. The neighborhood once had a bad reputation and was considered dangerous but now you will find tourists flocking here to take photos. The community has been working hard to transform the neighborhood through various restoration projects and tourism. 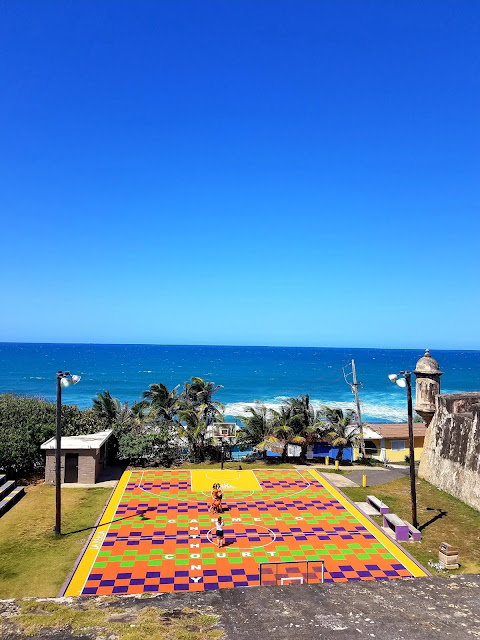 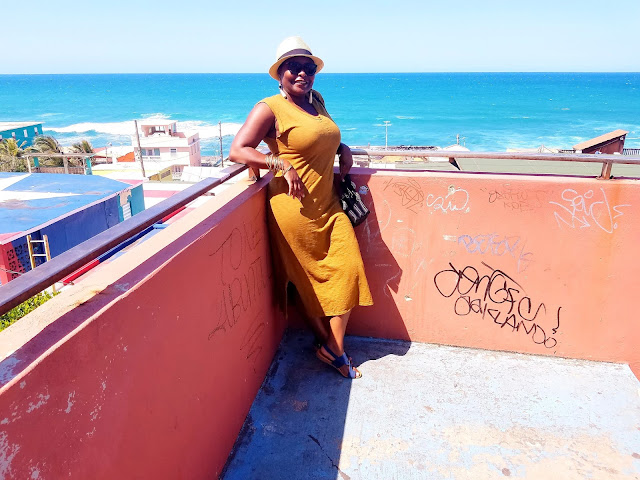 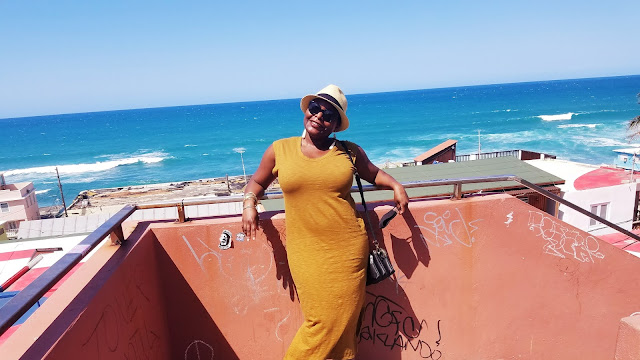 Castillo San Felipe del Morro (El Morro) - Considered one of the largest fortifications built by the Spanish in the Caribbean. 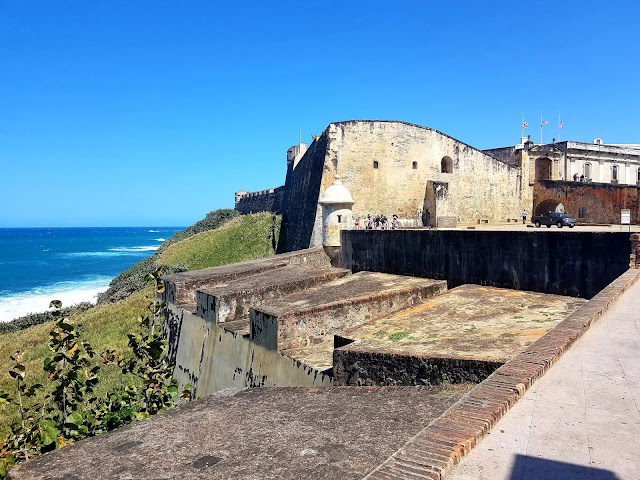 Puerta de San Juan - It is the old entrance to the city of San Juan. 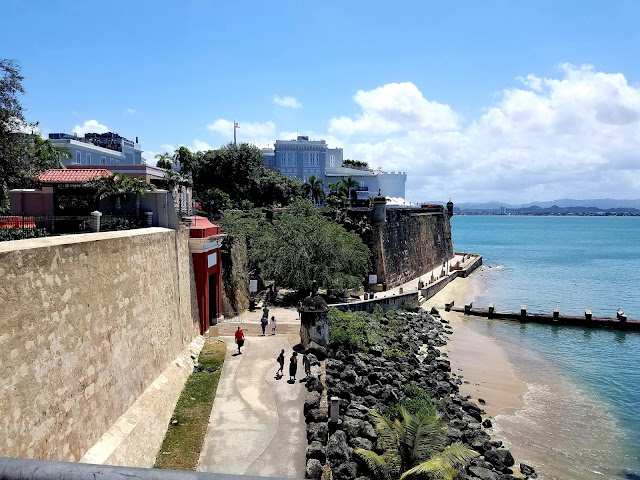 Plaza San Jose Church - One of the oldest churches in San Juan, it once held the remains of Ponce de Leon who was the first governor of Puerto Rico. 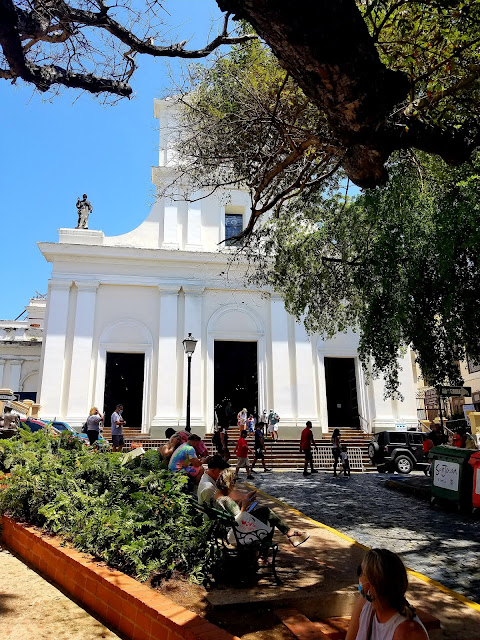 Capital del Cristo (Chapel of Christ) - Legend has it that it was erected to honor a miracle, I read that it is open a few times a year. 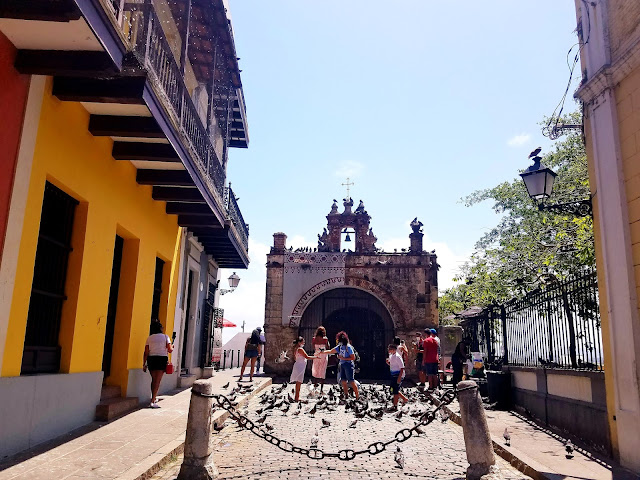 After all the walking I did under the hot sun, I decided to get some lunch so I headed to this one restaurant that had been recommended to me. It's called El Jibarito and it's located in Calle Sol. The restaurant serves Puerto Rican dishes and I had been told that a lot of locals go there, meaning that the food is pretty good and would be what you would find in a typical Puerto Rican home. I finally got to try out Mofongo which is fried green plantain mashed with garlic, salt and olive oil. I also included yellow rice in the mix since I had been told that it's pretty popular. The food was heavy! especially the mofongo, I couldn't finish it all. 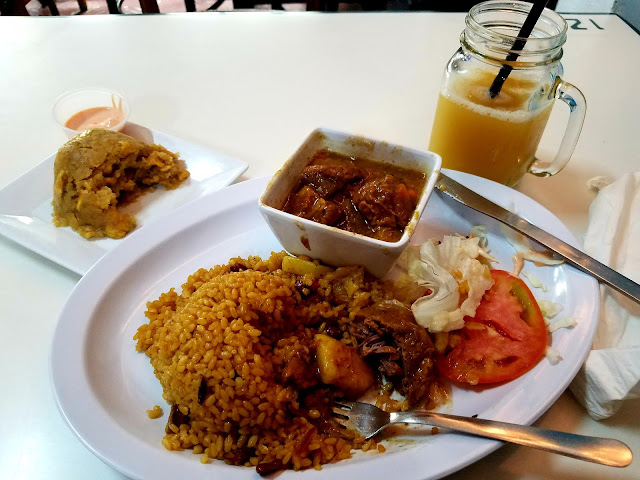 After that much needed lunch break, I continued with my adventures.......

La Puerta de la Bandera - A bit tricky to find but it's located in Calle San Jose and was painted by a local artist named Rosenda Alvarez. It's pretty popular with tourists and is a symbol of national identity. It used to be red, white and blue but the color was changed to what it is now, white and black as a symbol of resistance to US austerity measures in the island. 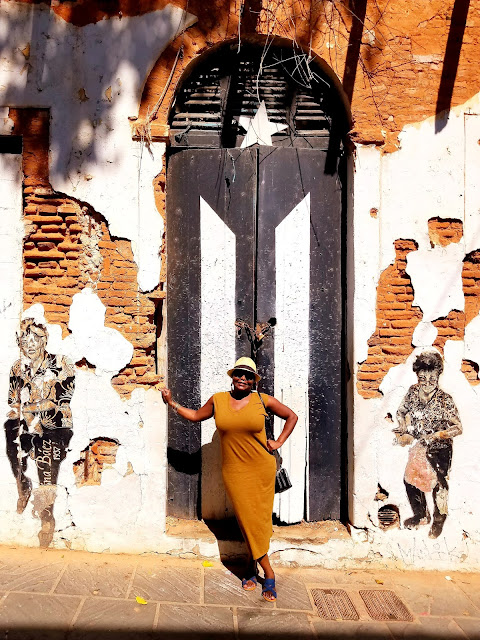 I took other photos around the city before calling it a day. I was tired, sweaty and the sun had done a number on me. 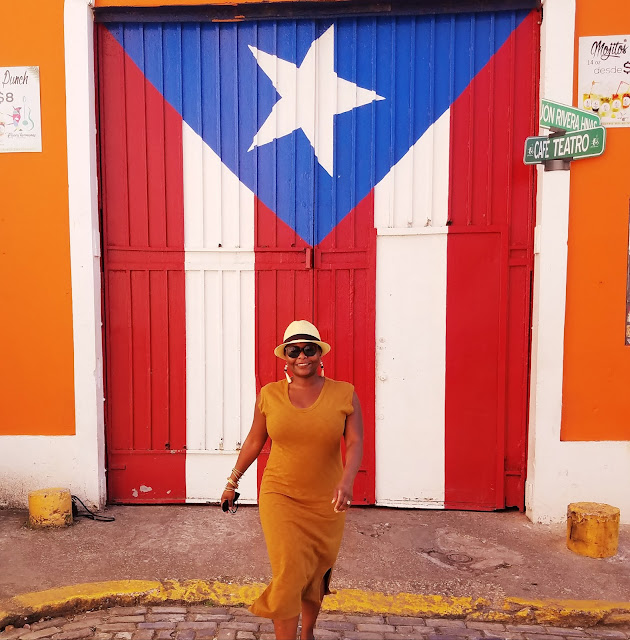 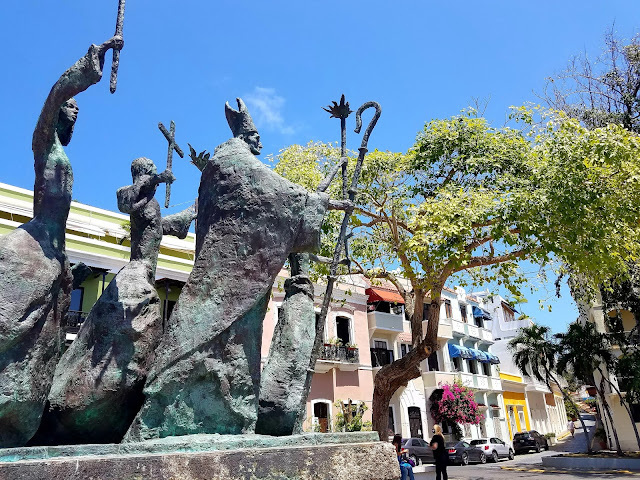 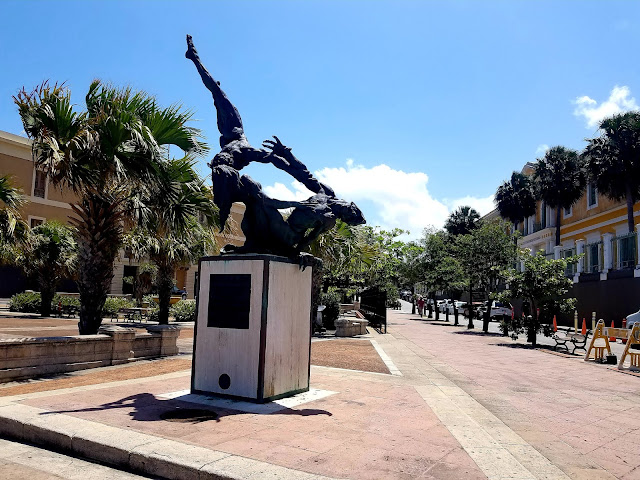 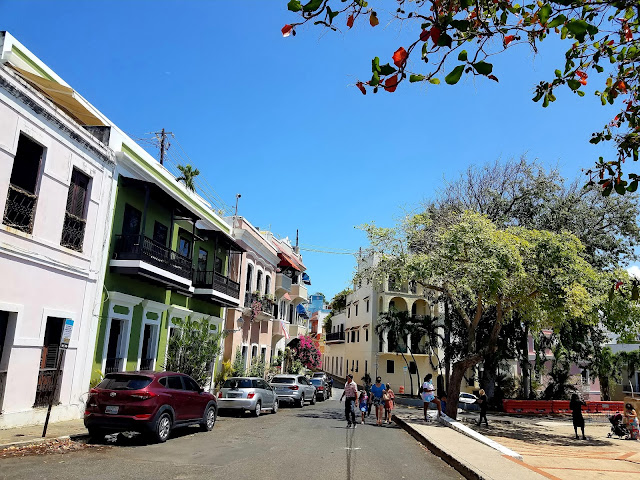 That's it folks! It was a long and hot day and by the time I got back to my Airbnb the first thing I did was take a long shower to cool off and remove that sticky feeling you get when you have spent the whole day out in the hot sun. This trip was chill but trust me, there will be a do over. My husband wants us to take a trip to the the island for his birthday in May or if not in May then sometime during the year. I plan for us to do all the great adventures that I didn't get to partake in on this trip just because some things are more fun if we do them together. The great planner in me already has the perfect itinerary for us on my second trip to Puerto Rico so watch this space.
Random Thoughts of The Day:
Although Spanish is the main language in Puerto Rico, English is also widely spoken especially around the touristic areas. With that being said, don't assume everyone you come across speaks it.
You need a covid PCR test taken within 72 hours before entering Puerto Rico, when entering the US from PR you don't need a covid test taken since the island is a US territory.
I heard that cops will fine you $100 if they catch you not wearing a mask and if it's not paid within 24 hrs then the fine goes up to $200. I don't mind wearing the mask but I have to say, it is tough wearing the mask while out in the streets with this hot weather. In crowded ares I wear my mask but when I am on empty streets or taking photos, then I take it off.
Speaking of photos I have to give props to all the people that I have met on this trip who helped take some of my photos. Sometimes asking strangers for photos can be intimidating but so far I have been lucky. I will go ahead and buy a stand for my phone just so that I don't have to rely on strangers to take my pictures.
Gasoline here is priced by the liter as opposed to the gallon so don't get too excited when you see 0.77 at the gas pump thinking it's too cheap.