Today's adventure took me to Wadi Rum (Valley of the Moon) another famous attraction in Jordan which happens to be a desert. A desert? what's so special about a desert?! maybe that's what some of you may be thinking but Wadi Rum happens to be a very picturesque place where you can see some beautiful rock formations thanks to mother nature, and also get a chance to revisit history through inscriptions on the base of certain rocks made by traders on caravans that passed through the desert thousands of years back. Another fun fact is that it also happens to be the setting of the famous historical drama film, Lawrence of Arabia. My journey to Wadi Rum begun in Wadi Musa (Valley of Moses) which is about an hour away from the desert.

As I had mentioned before, Wadi Musa is a town surrounding Petra so if you are planning an overnight visit to Petra, your accommodation will be around Wadi Musa for convenience. Anyway, the airbnb rental that I stayed at arranged for a guide to take me to Wadi Rum early in the morning since my plan was to head back to Amman in the evening. At 8:00 am I met up with my guide Mohammed and we set off to the desert. As we were leaving Wadi Musa, Mohammed made a quick stop at this one area so I could get an aerial view of Petra and he pointed out where the different points of interest within the site were. The view was gorgeous especially with the sun out. 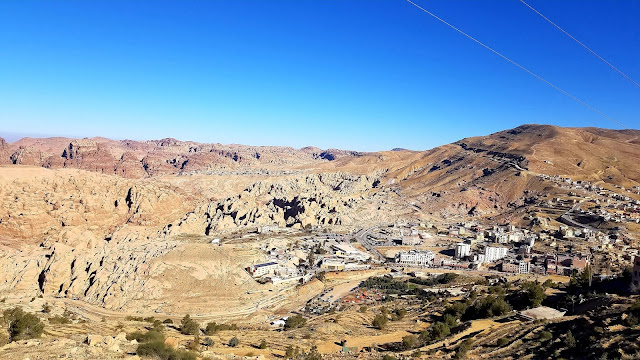 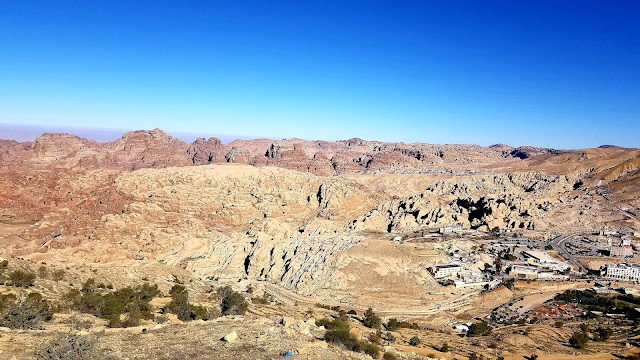 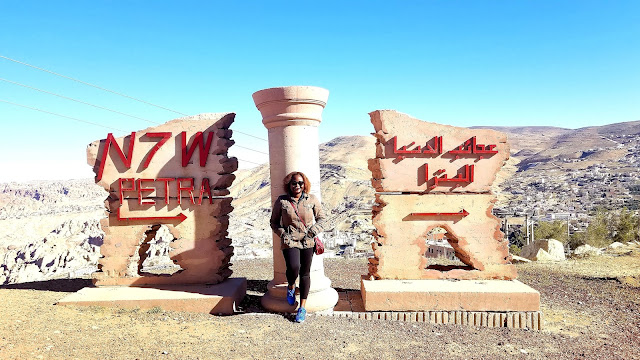 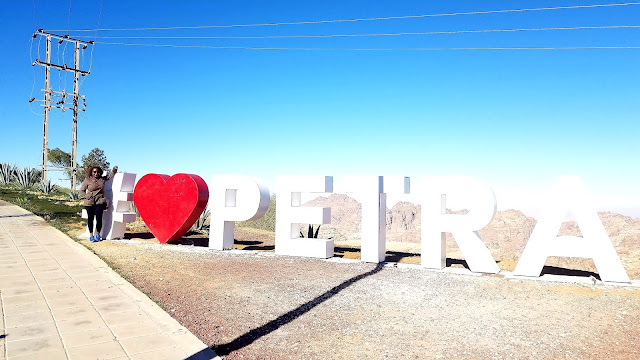 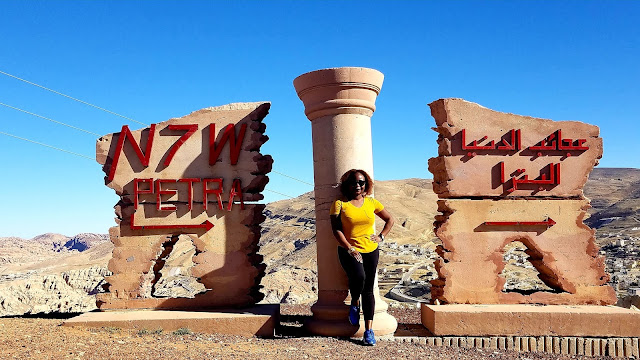 After taking a few photos we proceeded with our trip, the drive to Wadi Rum went by fast and soon we were in the desert. I was blown away by how beautiful the landscape was and how serene it felt, now I understood why it had been highly recommended. At this point I will let the pictures do the talking....... 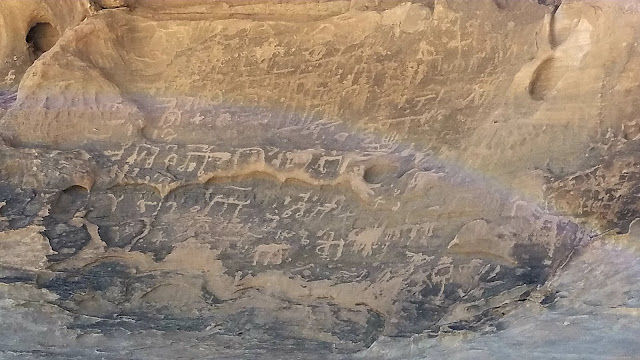 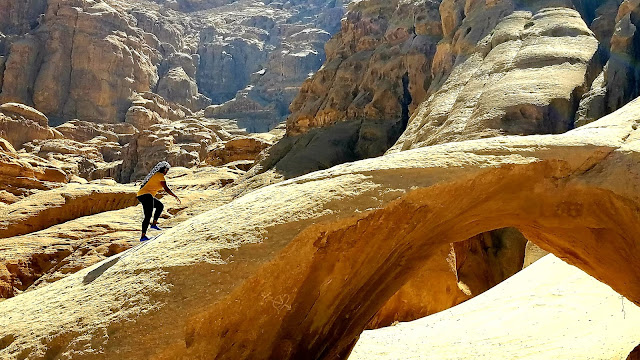 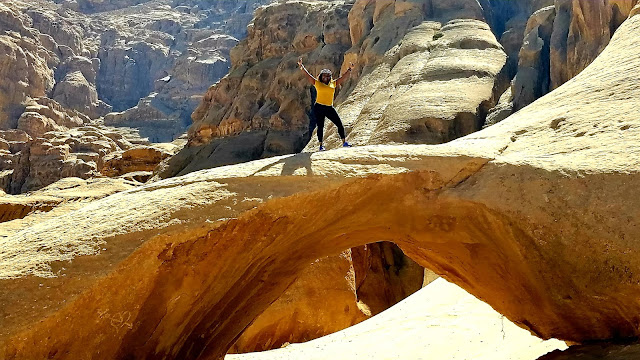 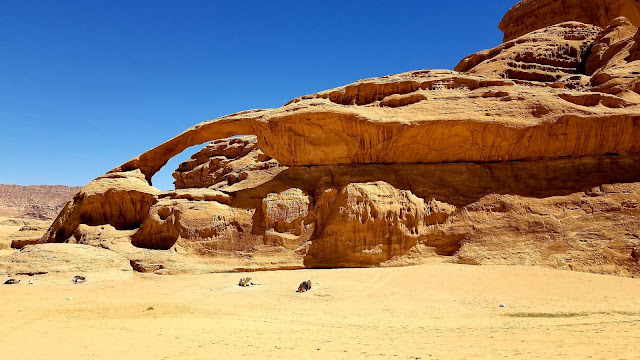 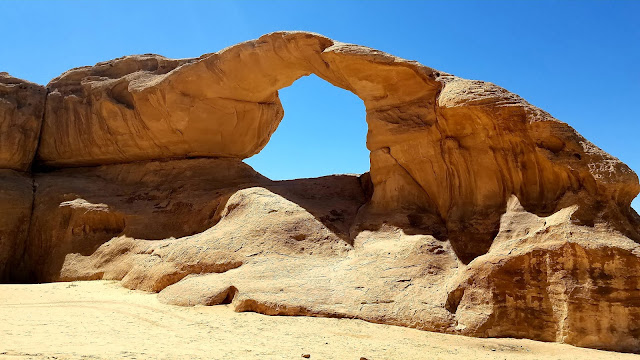 Some of the rocks were formed into animal shapes like this one below. Do you see the head of an elephant with it's eyes, mouth and trunk? 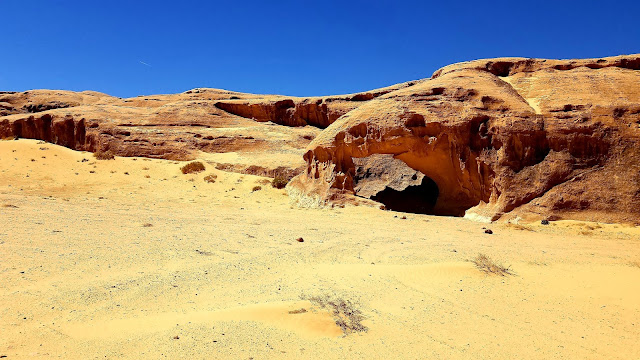 The stone below is shaped like a mushroom depending on the angle you view it from, do you see it? 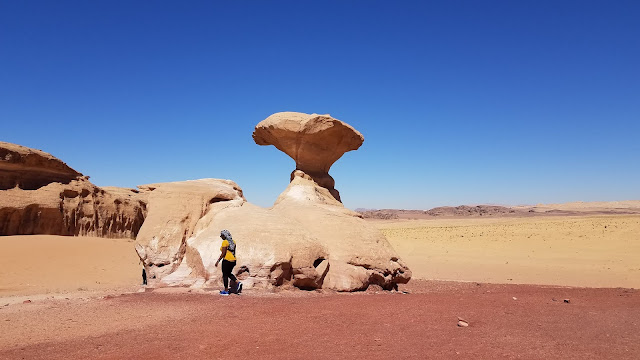 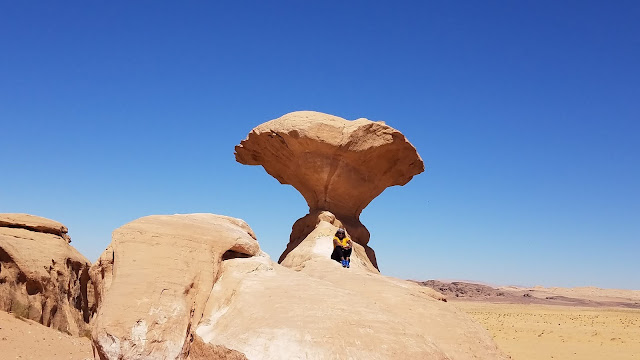 See the different sand colors? there was red sand, brown sand, white sand and even black sand in different areas. The color contrast was very pretty. 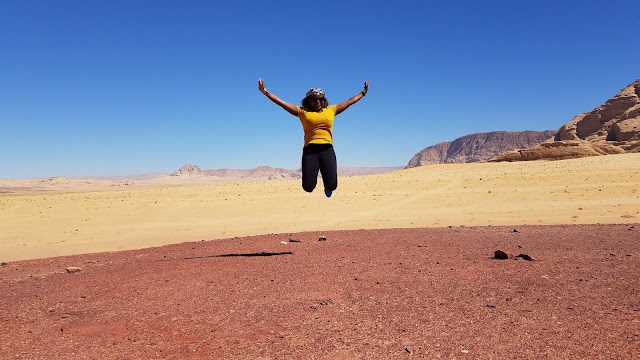 The castle below was built in 1962 for the Lawrence of Arabia movie. 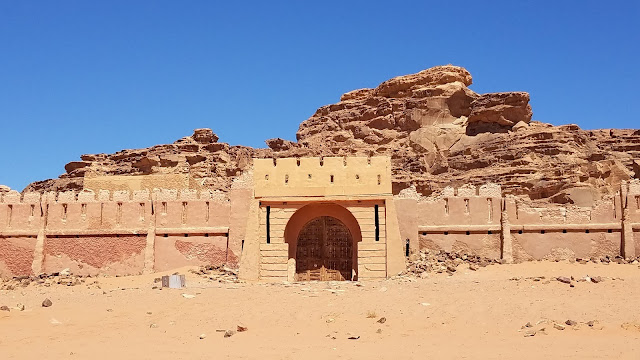 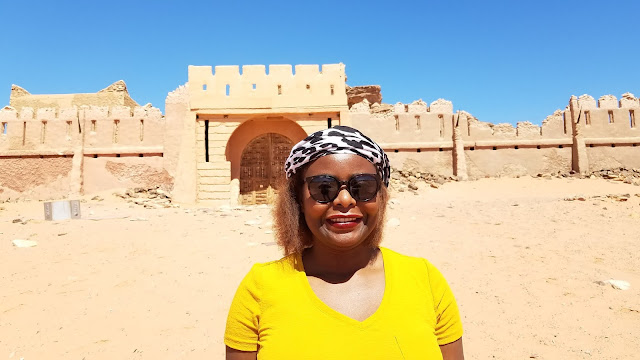 That's it folks! I did have an enjoyable time at Wadi Rum and I am so glad I did not dismiss it as "just a bare desert with nothing to see" because clearly there is a lot to see!

Even though the sun was out bright, it was not uncomfortably hot at Wadi Rum. It is the beginning of spring which is the best time to visit as temperatures are comfortable, during summer it get's really hot.

During my tour within the desert, we came across another tour group. Their guide was this older gentleman that looked harmless, he actually looked like someone's sweet pot bellied grandpa and as he was talking to my guide Mohammed, I was busy taking photos and minding my own business. Later as we drove off, Mohammed's phone kept going off and he would ignore it until after 3 attempts by the caller he answered then spoke briefly before hanging up. He sounded annoyed but I wasn't paying too much attention until he told me it was the other guide that we came across. Apparently dude doesn't respect boundaries and likes getting touchy with female tourists, turns out when they were talking the guy was telling Mohammed how lucky he was to have me on his tour because he was going to have a "hot date" unlike him because he had a couple of much older tourists. When he called Mohammed it was to ask him where we were and if he had "scored" yet! the nerve of that pathetic pervert! it's the innocent looking ones that shock you sometimes. Apparently he is well known for his antics within the circle of tour guides, how he is still operating in the tourism industry is beyond my comprehension.

I loved my airbnb rental at Wadi Musa and it sucks that I was not able to stay longer. Its owned by this Dutch lady that traveled to Jordan, fell in love with the country and decided to move there. She is quite a character and from the moment we met face to face we just started talking like we knew each other. Her stories are hilarious!!! I was laughing my head off and when I left this morning I gave her a long hug and told her not to move from Jordan because if I were to visit again I would like to stay longer at her place. She laughed and said, "please do! I am not leaving Jordan."

So she was telling me about the local Bedouins who seduce foreign women who end up getting their hearts broken then come crying to her about being duped. These were her exact words, "Ooh! please! what love?! he told you that you were the most beautiful woman he had ever seen and took you to his cave where you had sex after knowing him for 2 hours thinking it was so exotic then you start talking about love?" Okay, I don't mean to be heartless but can you literally picture the whole scenario of being taken to a guy's cave? I just burst out laughing! the image I conjured was too hilarious and by the way some of the Bedouins do still live in caves.

Speaking of Bedouins, you will see some of the dudes wearing eyeliner which gives them this intense look. I asked Barakat my guide yesterday why they do that and he said it's to attract women, in my opinion......I thought it made them look shifty but I have to admit that the eyeliner does enhance their looks. Maybe some girls find that attractive, to each their own.

Now that I have been to Wadi Rum, I have to re-watch the movie "Lawrence of Arabia" I watched it in college when I took a film class but that was ages ago and I don't remember much of it.

It's funny when you ask for directions around Wadi Musa everyone uses meters to describe how far or near a place is. For example, "go 10 meters then turn left" or the "the shop is 5 meters from here, follow this road." I would just nod my head and go, "'Ooh! ok, so go straight and then take the 1st or 2nd left?"