Hola! I finally made it to Cuba, yay! I got in this morning and everything went very smoothly. I traveled to Cuba via Cancun, Mexico ( I will write more on this later) and at the airport I had to buy a tourist card to enter Cuba (this was at the Cancun, airport). The tourist card was very easy to obtain as they were being sold near the check in counters, the guy selling them was trying to rip me off by quoting $25 for the card, I did not know any better so I gave him $40 expecting $15 back, turns out this worked in my favor since he didn't have $5 on him so he charged me $20. I did look up the cost for the tourist card online and it does cost $20 if you buy it in Mexico, the nerve of that guy! I don't know about other countries but US passport holders have to have this card to enter Cuba so make sure you buy it prior to checking in.

I had read that baggage claim at the Havana airport is a mess and you could easily spend an hour or more waiting to get your luggage and chances of it being lost are high as well. With this in mind I made sure to pack light and travel with only my backpack and a small carry on suitcase. I was feeling quite proud of myself for traveling light till the lady at the check in counter told me that all the luggage on you has to be 10 kilos and below in order to considered carry ons. My luggage (backpack and suitcase) weighed 12 kilos so I had to check in my suitcase. You can imagine my sorrow and panic as I realized that if my suitcase ended up lost I would be so screwed since it pretty much had all my daily essentials. I reluctantly checked in my suitcase but later on saw people boarding the plane with luggage that appeared to weigh more than 10 kilos!! what the hell?!!

The trip to Havana from Cancun lasted about an hour and a few minutes and once we landed, the immigration process was smooth and fast. I was done within 5 minutes. Baggage claim was also smoother than expected and contrary to a lot of what I had read online, I was able to get my suitcase within 15 minutes. That certainly took care of my initial worry about losing my suitcase or having to wait for hours in order to get it. The baggage claim area was well organized from what I observed, I really wonder why I read so many bad reviews but my experience was very pleasant.

With luggage in hand I headed outside the airport to get a taxi. This older guy approached me and offered me a ride at the price that I had been advised is within normal range so I decided to accept his offer. He turned out to be quite a funny man and when I got to my airbnb accommodation he actually parked his car and carried my suitcase to the address I had in hand and even called my airbnb host to make sure he came down to get me, before he left. He was such a sweetie and had this fatherly vibe about him. In the taxi when we were chatting I had mentioned that my birthday was going to be on the 17th so when we got to my airbnb he asked my host to note down his number and call him during my birthday so he could wish me well, he was very serious by the way. It was so cute!

My airbnb host Damian got me oriented with the house where I was going to be staying in and introduced me to his wife Chaveli and his mother who lives with them. I immediately felt like part of the family and within minutes I was chatting away with them like we had known each other for a very long time. They are super cool and I really took a liking to Chaveli the wife, talking to her felt like I was talking to an old friend. They gave me a map and showed me places of interest, they live in Havana Centro which is between Havana Vieja and Havana Nueva. This location is very convenient thus why I chose it, everything was within walking distance so I decided to maximize my day by exploring Havana Vieja to familiarize myself with the streets.

Walking along the streets of Havana Vieja gave me such a deja vu feeling as it reminded me so much of other cities I had been to in South America and the Caribbean, cities like Cartagena in Colombia, Puerto Plata & Santo Domingo in the DR. I think it gets to a point where all plazas in Latin American countries start to look the same and so do the narrow colorful streets. Don't get me wrong, Havana Vieja has it's charm but I wasn't wowed because everything just appeared so familiar. The only difference were the colorful 1950's cars which are used as taxis for tourism and some crumbling buildings that seemed to have stood the test of time. Well, it's only my first day here so my opinion might change within the next several days. In the meantime, enjoy some of the photos I took during my stroll. 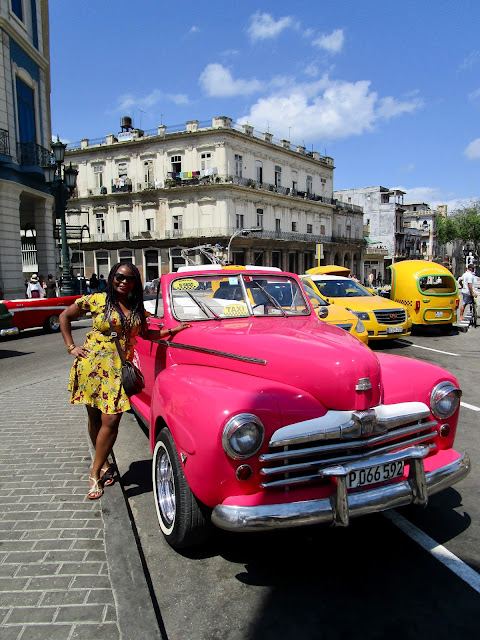 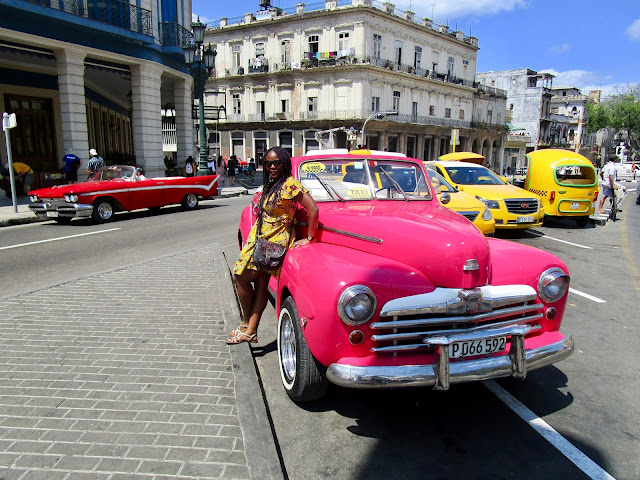 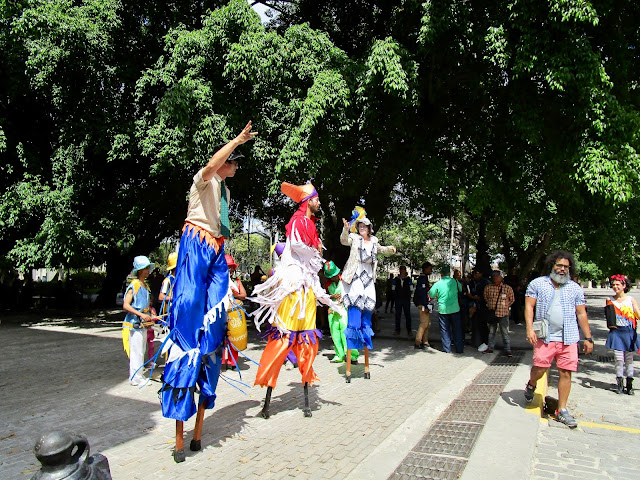 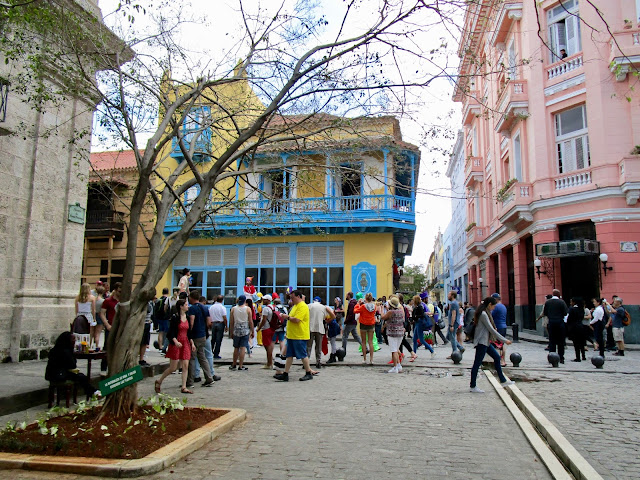 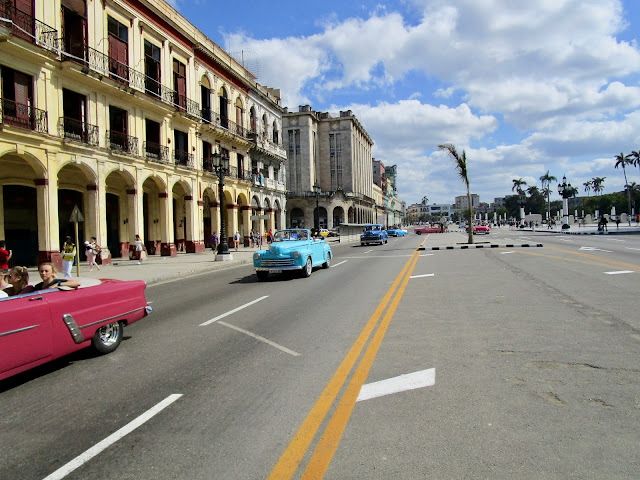 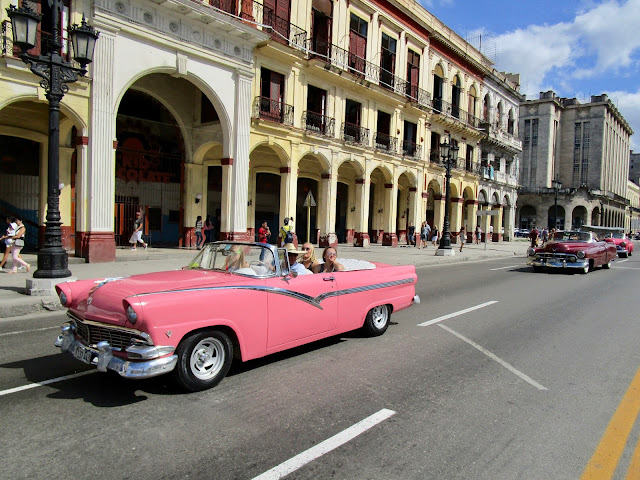 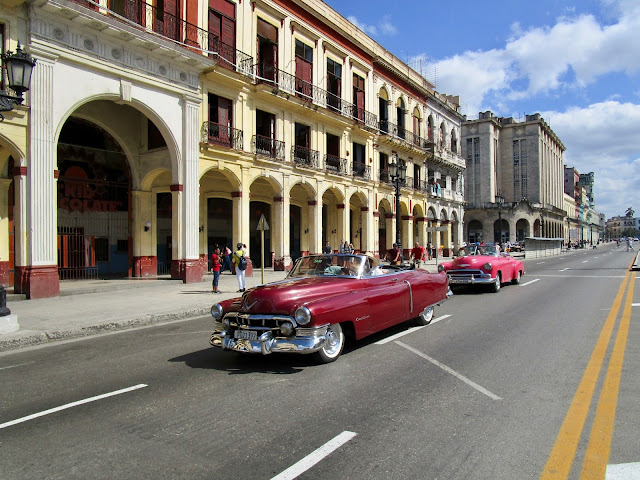 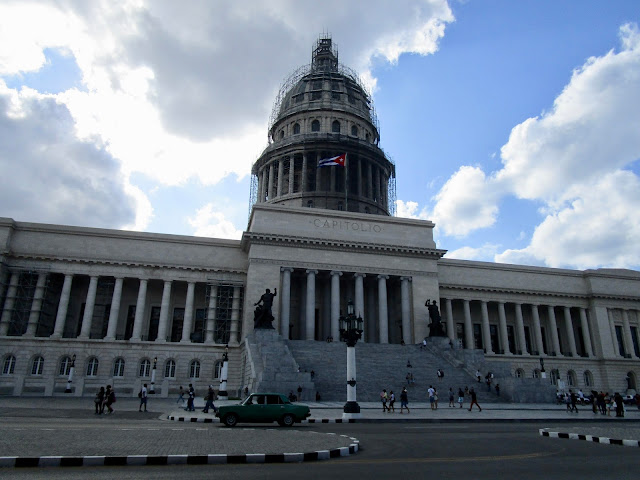 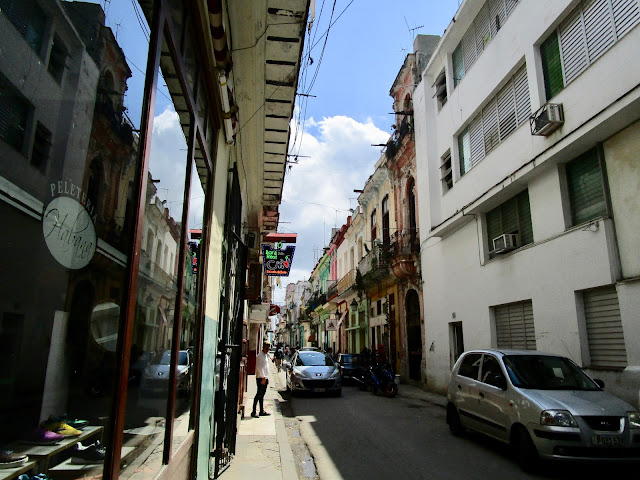 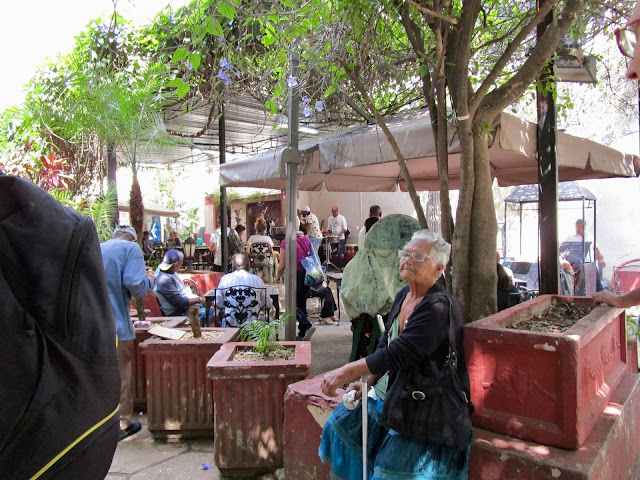 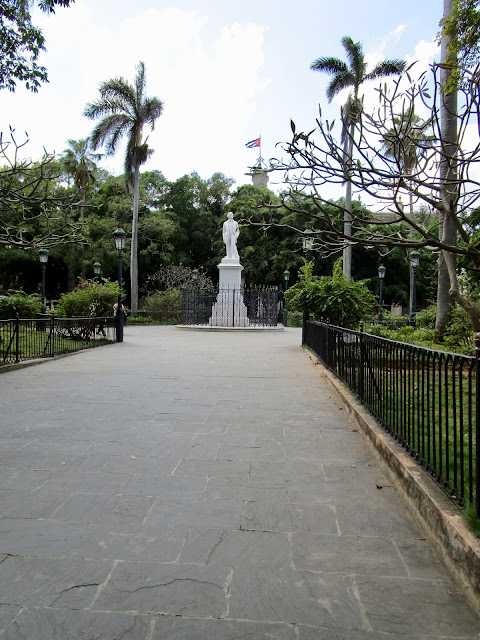 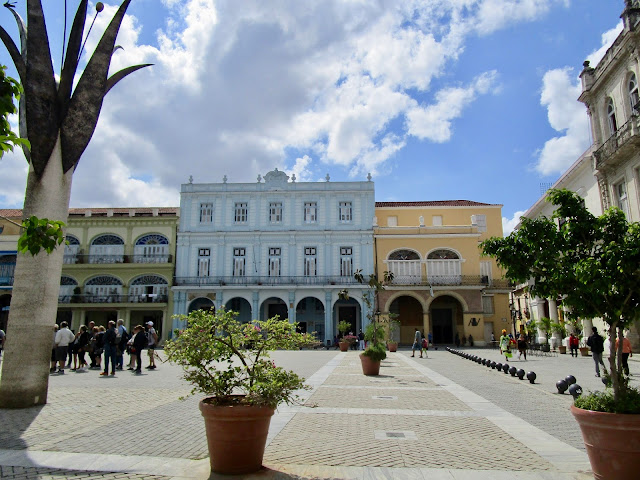 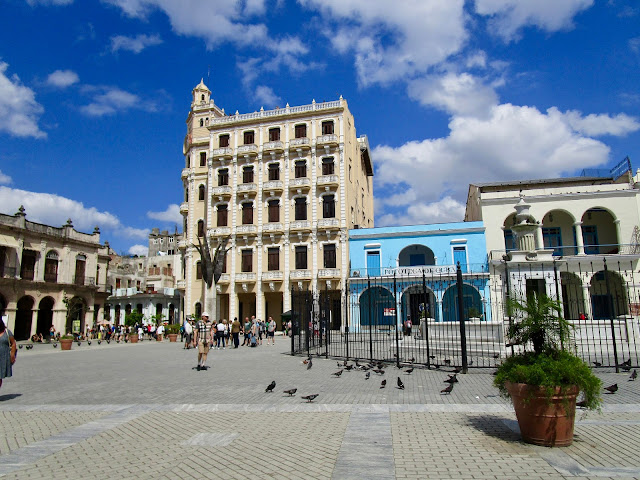 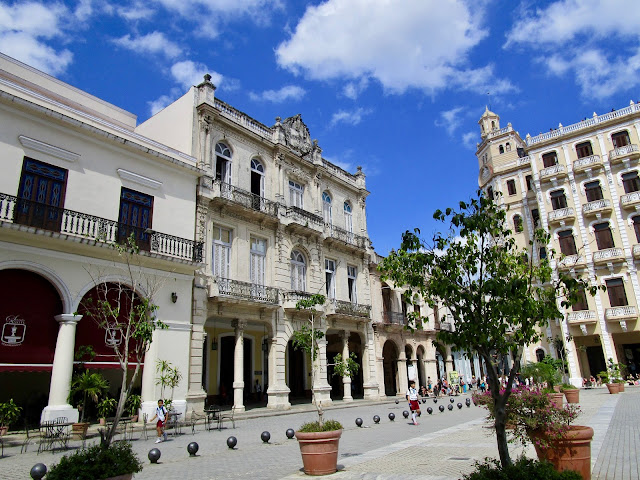 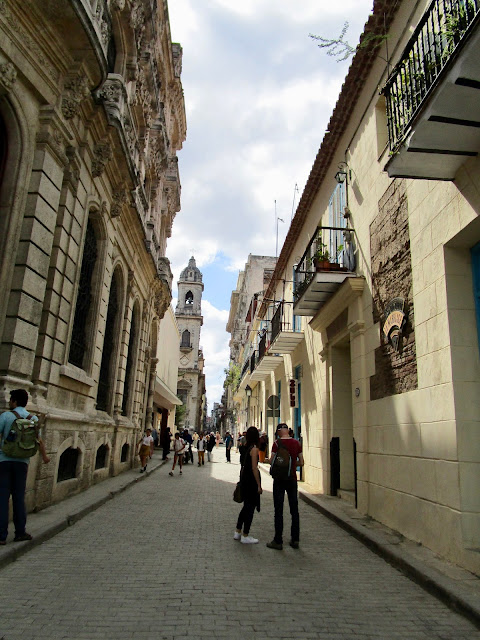 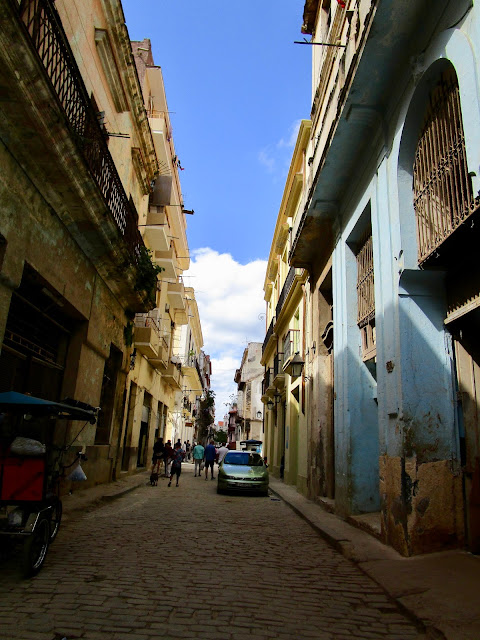 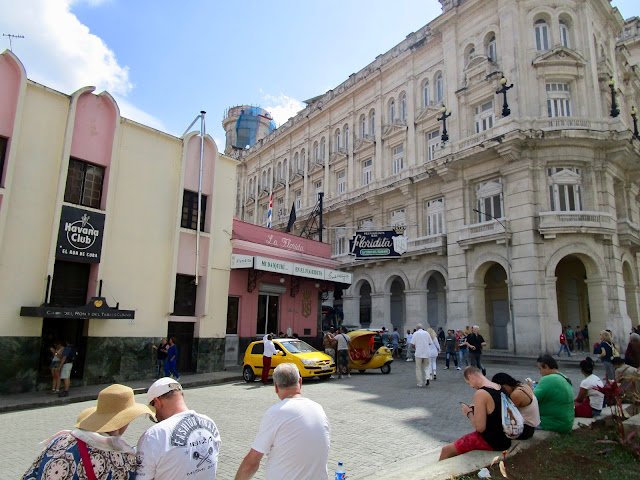 After so much walking I decided to stop for lunch at one of the restaurants that had been recommended to me. It's called Los Nardos and is in front of the Capitolio. The food was alright and cheap but the service was HORRIBLE!! I swear I waited for almost an hour to have my order taken, this other couple seated next to me got very annoyed by the ridiculous wait that they decided to leave but I was starving so I decided to tough it out. You would think the wait was long because the restaurant was busy but nope! the waiters just didn't seem that interested in delivering fast service and were busy chatting and idling about. The funny thing is, the food arrived within 10 minutes after ordering.

After lunch I headed back to my room because I was tired and my feet were so sore from all the walking, I had been walking nonstop for 4 hours. Once I got to the house I sat down with my hosts Damian and Chaveli and we ended up talking until very late at night. It was a good and productive day that ended on a high note.

People here are very friendly and helpful with directions if you stop them on the streets but customer service in places like restaurants is crap or rather non existent.

I had heard that Cuban men can be very annoying with catcalls on the streets but to be honest with you, I haven't been bothered at all so far which is great because I have enjoyed the peaceful walks on these Havana streets.

Speaking of men, the taxista who gave me a ride from the airport earlier on today was telling me that majority of Cuban men are womanizers, he then said that Cubans resolve all their problems through sex because life is tough here so sometimes to escape this reality you seek something that brings you pleasure and helps you forget. He was laughing as he told me this.

It is very safe here and Damian was telling me that chances of getting mugged are very low. It's not impossible but it's a rare occurrence because the law is very tough on criminals. I never once felt uncomfortable walking around even when I was taking photos with my phone, I have traveled to places where taking out your camera or phone to take photos immediately marks you as a target so it feels refreshing not having to worry about someone grabbing my phone.

I have seen some very attractive men on these Havana streets, dios mio! nothing wrong with appreciating God's marvelous creation plus as I always say, "I am married not blind."

It's amazing the things we take for granted but for the regular Cuban, it's a luxury. Products are not always available in stores and options are very limited. I was talking to Chaveli about hair products and she was telling me how hard it is to get access to good hair products. If you come across a good product; any product not just hair product, buy as much of it as possible because it's not a guarantee it will be on the shelf the next day.

There are Cubans who bring products from the US and sell them (not legally of course because Cubans are prohibited from importing goods for business purposes). The stuff they bring doesn't last long as everyone scrambles to buy them quick.