Today was a good day, the host family I am staying with had recommended that I take a tour of the surrounding small towns around Antigua to learn a little bit more about their history and culture. I was all for it because I had not had the opportunity to really explore Antigua in depth since my arrival so today was a perfect day to get to know more about the city and it's environs.

The first place I got to check out was Cerro de La Cruz which is a hill from which you can get a very good ariel view of Antigua. Most people go there to relax and hang out with friends or take photos of the city down below. The ariel view was really beautiful but unfortunately the sun decided to hide once we got up there so the photos I took looked a bit dull. I swear the one time you really need the sun to come out is when it never does, it did eventually come out though.............when we had descended from the hill! 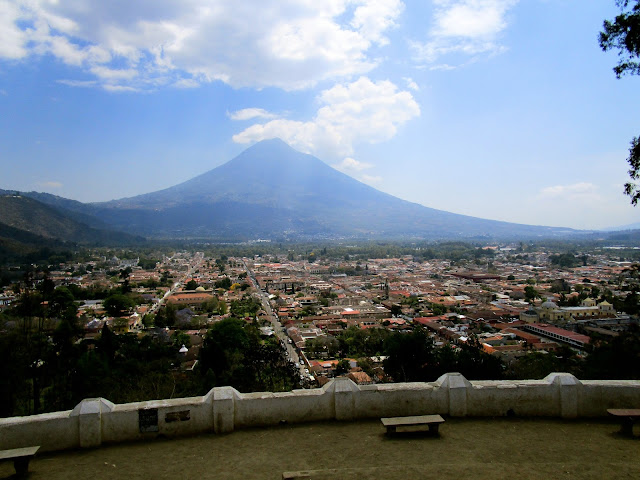 From Cerro de La Cruz we continued on to the surrounding towns as the guide explained the history of each town and the general way of life of the people who live there. We visited three towns whose names I can not remember right now but they were all named after a saint. The towns appeared very chill and I got to capture some really cute views, I hope the pictures give a glimpse of that. 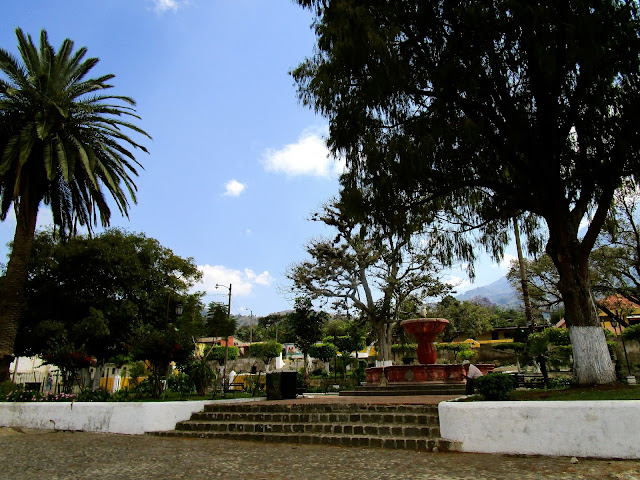 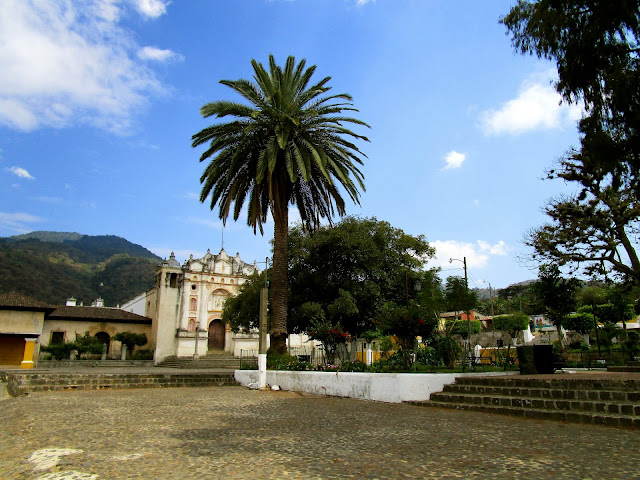 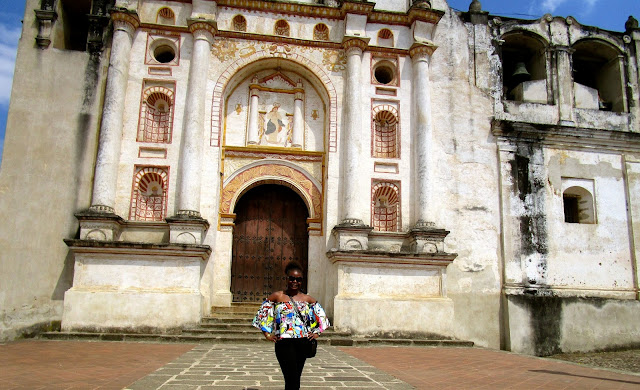 If you haven't notice, yellow does stand out in a lot of the buildings in Antigua. I don't remember if I mentioned it before but it was one of the common colors that the Spanish used so to preserve the historic identity of Antigua, in certain areas it's not permitted to change the color of the buildings or use other colors other than what was commonly used historically. The other colors beside yellow are white and red. 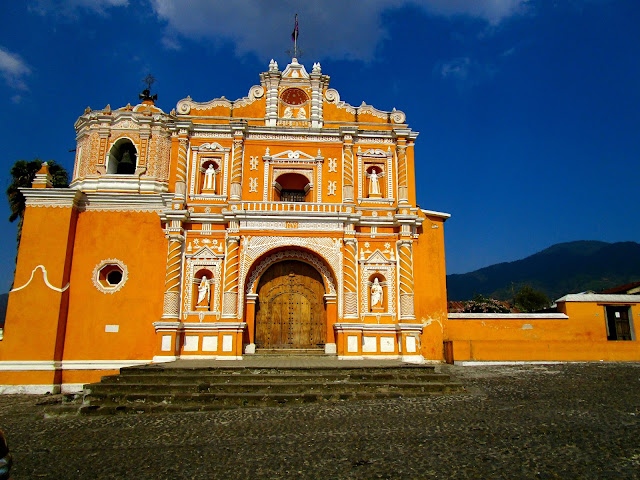 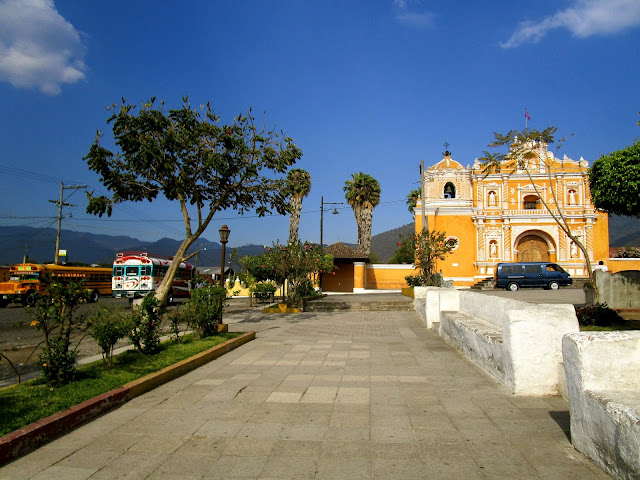 At one of the towns there was a communal water structure where women were washing clothes, the guide explained that because some of the residents don't have running water in their homes the city provided them with a communal area where they can wash clothes, get the water to bath and cook. The lady below was so sweet and friendly and we chatted for a while before I asked her for a photo. 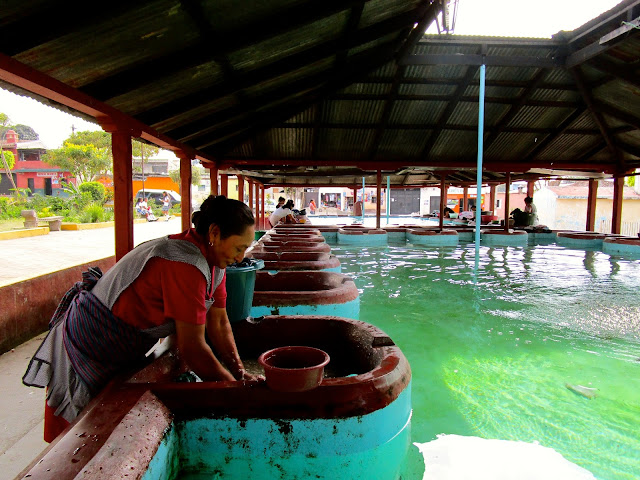 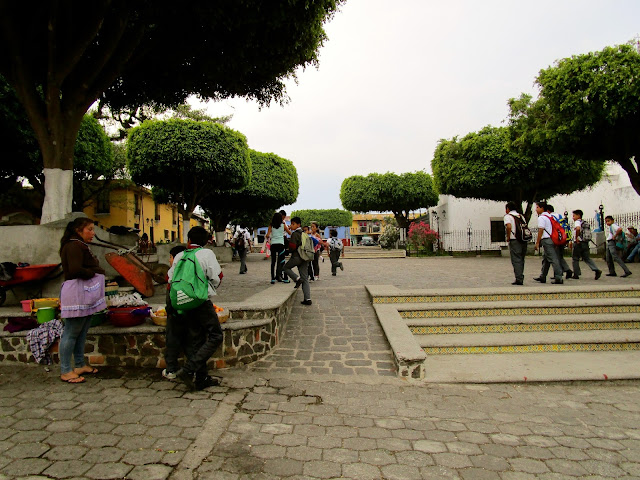 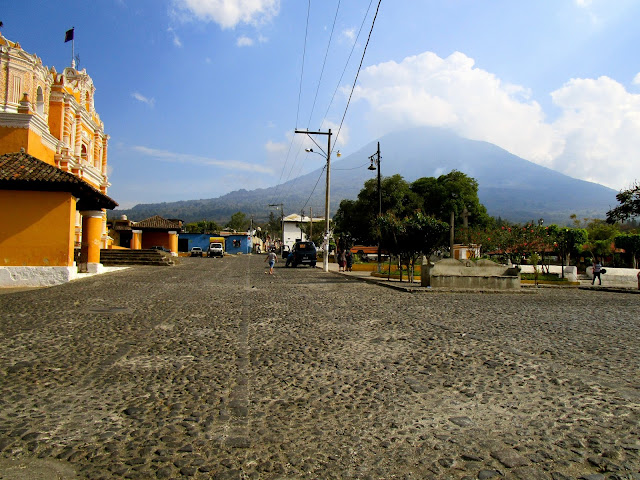 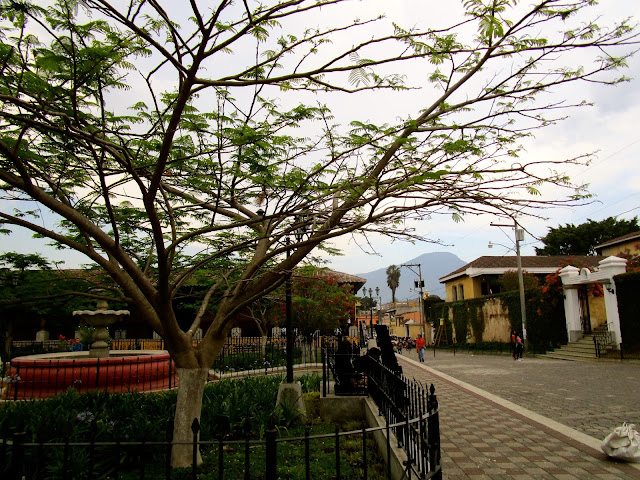 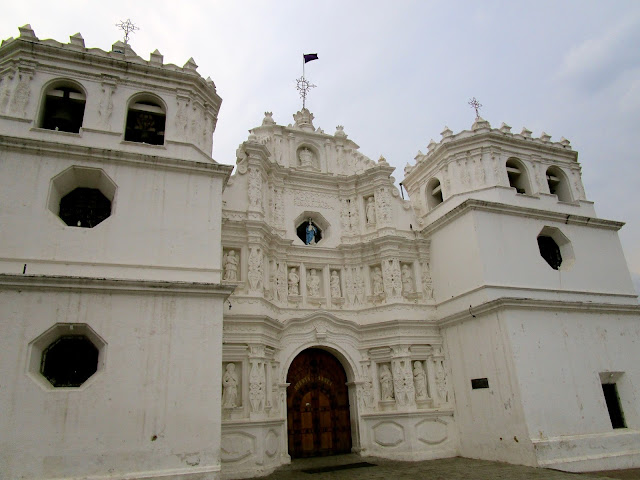 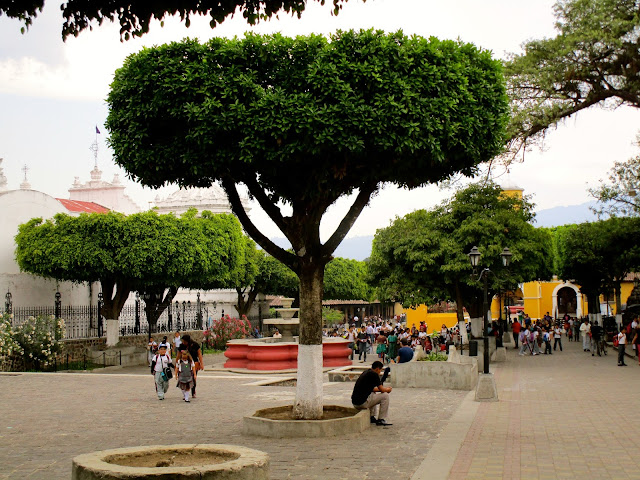 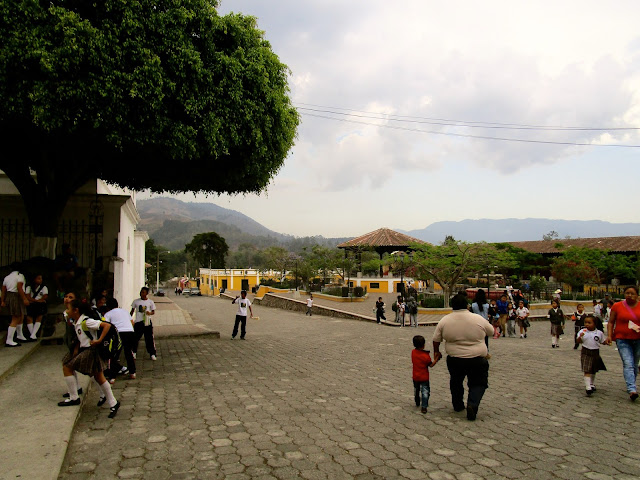 We visited a monastery to learn more about the historic and current influences of Christianity in the region. Inside the monastery were furniture and artifacts dating hundreds of years that were so well preserved that it was hard imagining how old they were. While on the subject of religion the guide told me an interesting piece of history. When the Spanish conquered the Mayans and forced them to accept Christianity, they destroyed their sacred sites and built churches over them to highlight their authority.

The Mayans had no choice but to accept Christianity but one thing that the Spanish didn't realize is that although the Mayans "accepted" to attend church and pray, they were actually praying to their gods in secret. You see, they attended church on specific days and times because they still consulted with their religious calendar and at the appropriate time they would attend a church that was built over a specific sacred ground and worship their gods by presenting offerings because they believed their gods were still present in those sites. The Spanish did not know this by the way, they had no way of knowing and they just assumed they attended church because they had accepted Christianity. Interesting, huh? Okay, back to the monastery.

I didn't take pictures inside but I couldn't resist taking pictures of the very pretty garden in the middle of the monastery. 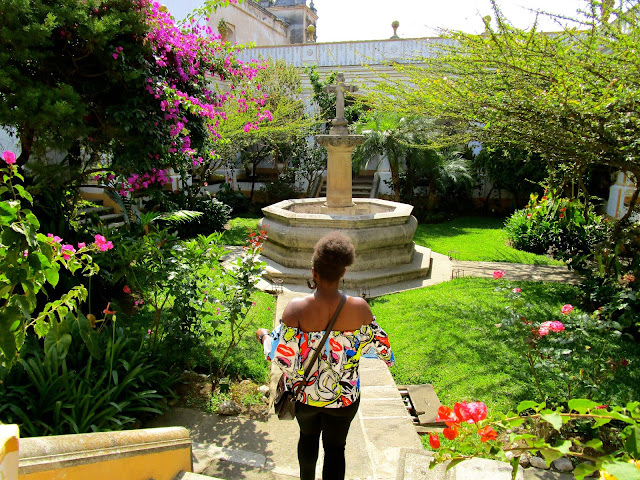 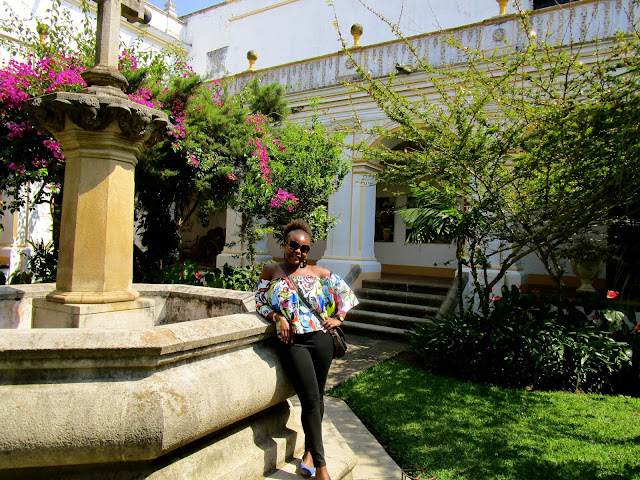 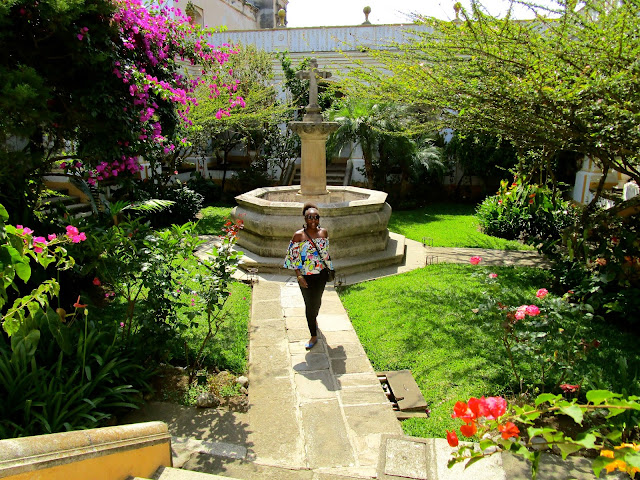 At the entrance to the monastery. 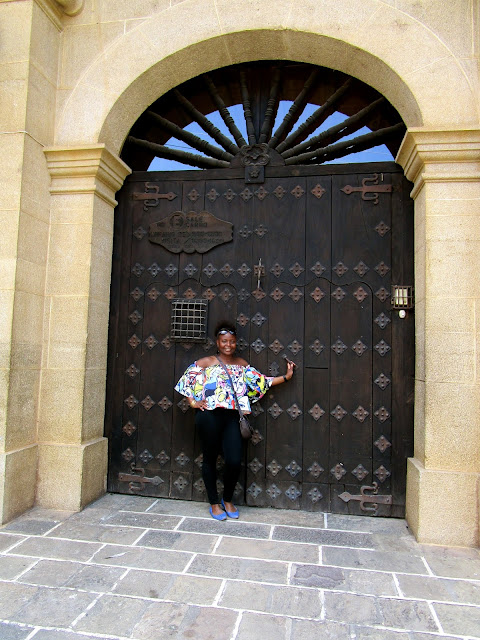 After bidding adieu to the monastery we stopped by a local wine maker to sample some of the wine made in the region. The wines were made from various fruits in the region and the owner of the place was super nice. He makes the wine himself and if you sample something that you like then you can buy some otherwise there is no obligation after sampling. I sampled quite a bit actually and I was a happy camper afterwards! 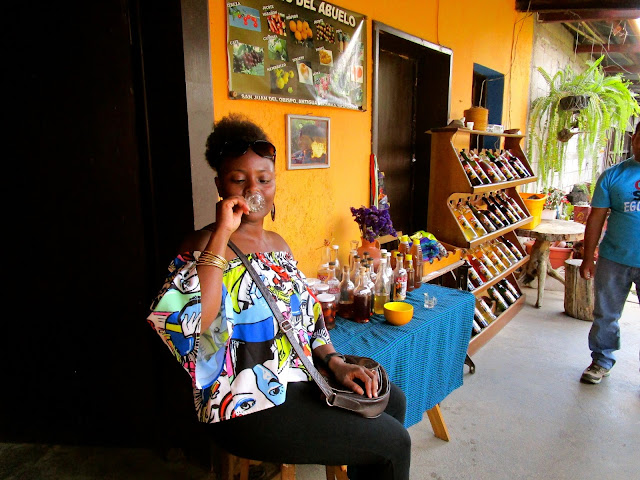 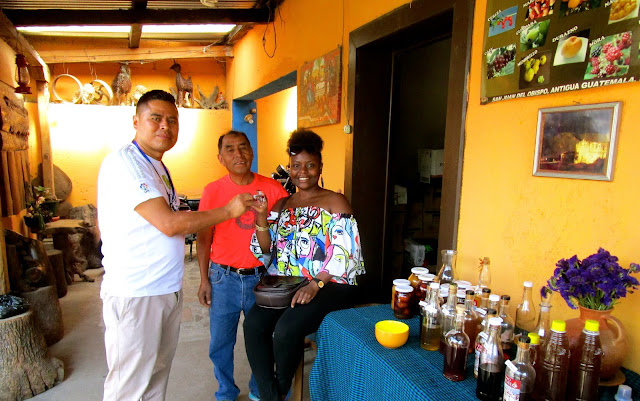 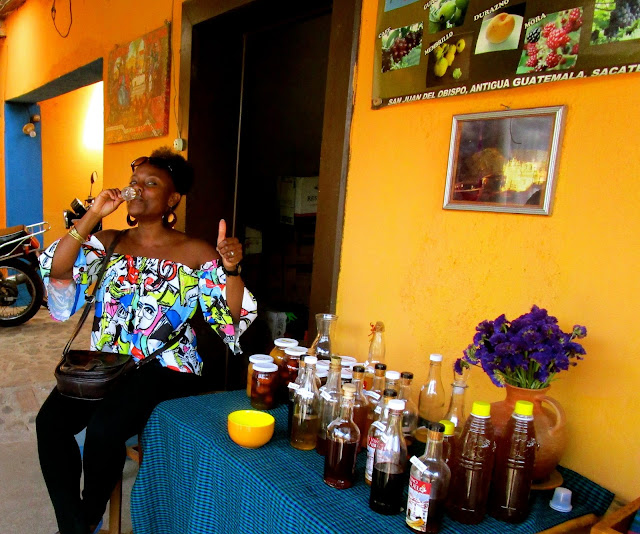 At the end of it all I picked out two of the sweetest wines that I sampled before moving on. 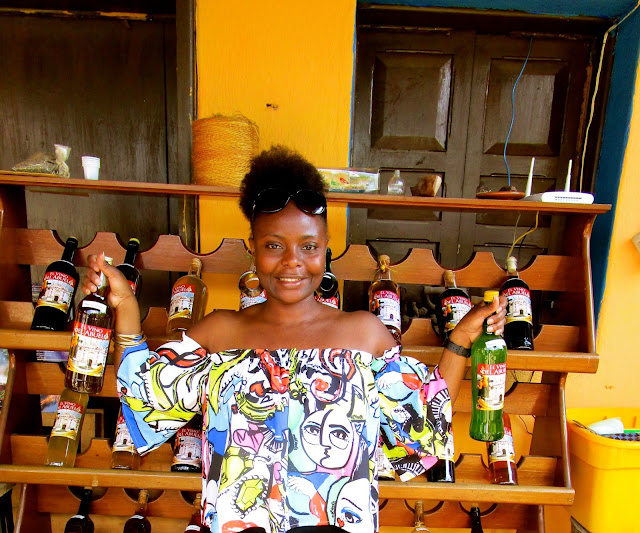 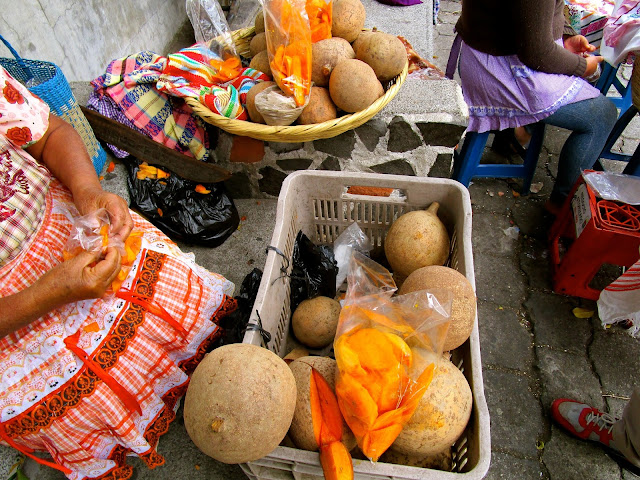 Last but not least we stopped by an artesian market and I had some fun with the local fabrics. I did get a very cute decorative wall hanging at a very reasonable price and I can't wait to see how it will look in our apartment, the colors are so pretty! 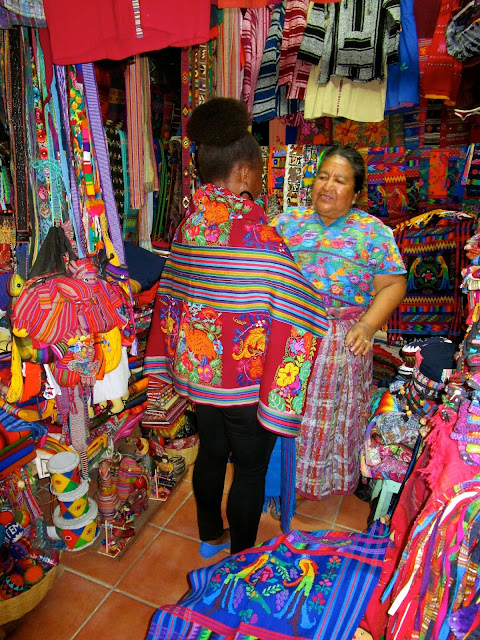 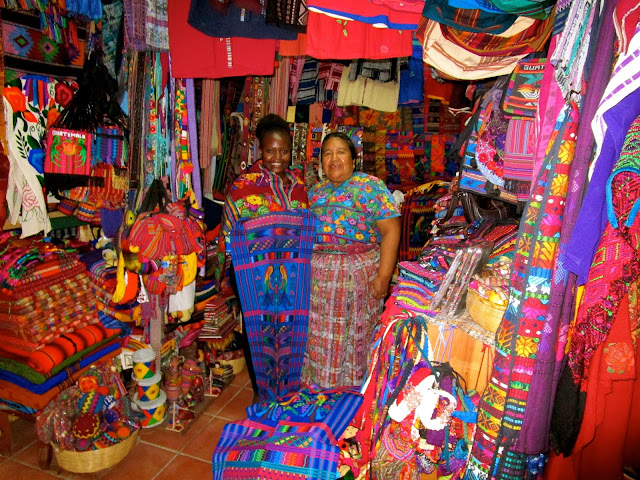 That's it folks, once again it was a day well spent and I had a lot of fun not only checking out the various towns we visited but also conversing with the guide who was really sweet and nice.

I didn't know how famous Kenyans are here in Guatemala until now. Every time I say I am from Kenya when people ask, they get so excited and start talking about the great marathon runners from Kenya. Turns out each year I believe, they hold international marathons in Antigua and Guatemala City and guess who always scoops the 1st, 2nd and 3rd price? Yup! Kenyans. Proud of my people.

When I am on holiday my eating habits are very crappy! I don't drink enough water and I eat anything that appeals to my palate regardless of how unhealthy it is. In short, while on holiday I want to sample everything and don't care much for watching what I eat.

I actually don't drink too much water on purpose because I am usually out and about a lot while on holiday so drinking a lot of water would require me to take frequent toilet breaks. Trust me, a clean toilet is never guaranteed while on the move and if there is one thing I can not stand is a dirty toilet. So basically I don't drink water while on the move just so that I never have to use the toilet. I have been trying to break this bad habit by drinking a lot of water in the evening when I am settled in the home I am staying at, to make up for not drinking water during the day.

The guide who was showing me around the city was saying that there are about 7 to 10 very powerful families who control the wealth in this country and hold a lot of political influence. I mean, they decide who will be president and who will not, how much more powerful can they get? Unfortunately these families want to maintain the status quo so they make sure the wealth stays in their hands at the expense of the masses. The guide is the third person who has told me this.

Cobbled streets may look very pretty but its hard to walk on them! you can easily sprain your ankles if you are not careful. They also take a toll on your shoes, my shoes have been scuffed so badly you should see them up close.

Tomorrow is my last day in Guatemala before heading back home. My flight leaves at night so I have the whole day to spare. I plan to sleep until I can't sleep anymore, walk around the the city exploring leisurely without any rush and enjoy some good food in one of the numerous restaurants around.

Email ThisBlogThis!Share to TwitterShare to FacebookShare to Pinterest
Labels: Guatemala