I can't believe December is already here and the year is almost coming to an end, how fast time flies when you are having fun. Here in Quito things have been pretty festive as December marks the celebrations of the foundation of the city (Fiestas de Quito) then there is Christmas to look forward to and the new year.

Quito was founded by the Spanish conquistadors on December 6th in 1534 so the city celebrates this day each year thus the title, Fiestas de Quito. Actually the celebrations are not just limited to that specific day but rather start at the beginning of December and come to a head on the 6th marking a week of festivities. There have been street parties in different neighborhoods and free concerts being held in various locations, Sting the world famous musician actually held a free concert this past Wednesday.

During the week the boyfriend and I were busy moving into another apartment and getting it spruced up so unfortunately we were unable to check out some of the festivities but on the last day of the fiestas de Quito which was yesterday, we decided to check out what was left of the fiestas. We ended up going to Parque Itchimbia which is famous for hosting concert events.

We had heard that various artists were performing at the park and there was all kinds of music being played from: salsa, bachata to merengue. We were pretty excited until we got to the park and found out the concert that was taking place was actually pure hardcore rock, no salsa or bachata or merengue but hardcore rock. Neither of us is a rock fan but we decided to stick around for a few minutes to check out some of the performances. Security was pretty tight and there were riot police with full body armor walking all over the place like they were ready for action. I was nervous wondering what kind of crowd was at the concert to warrant such heavy security, I guess being a free event there were all kinds of characters so the police just wanted to make sure nothing crazy pops off. 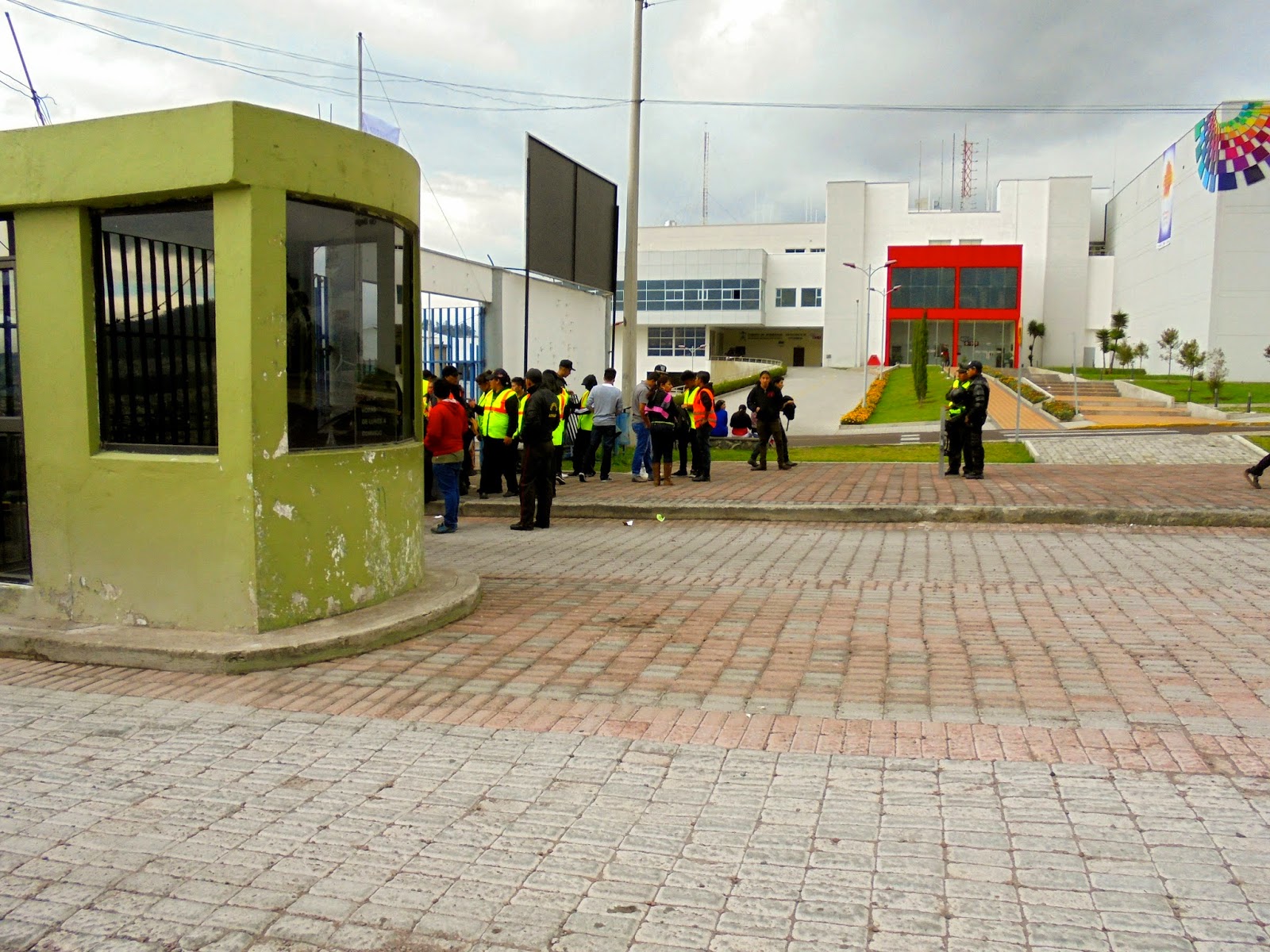 The weather unfortunately went from being super bright and shiny to dull and cloudy. 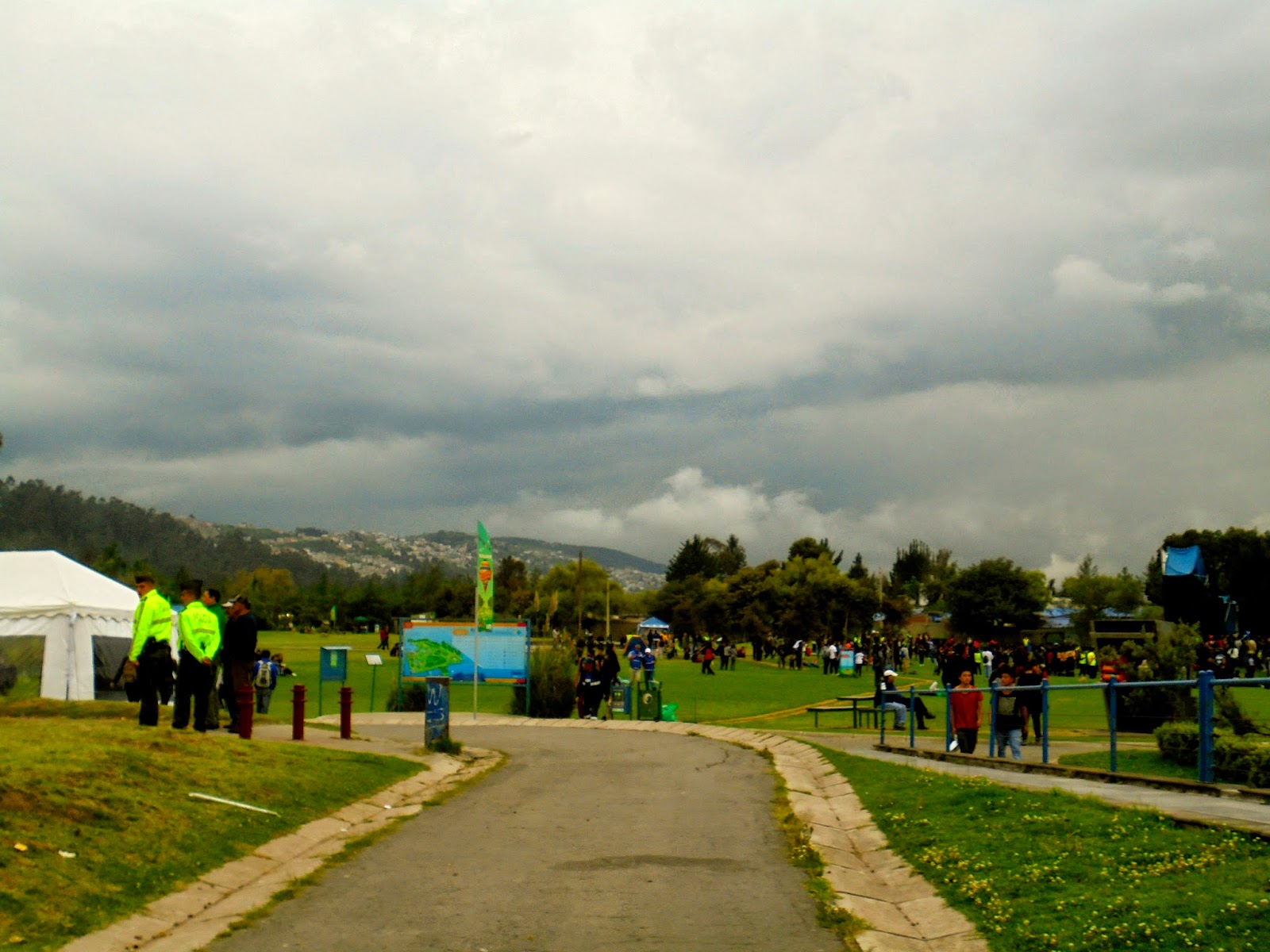 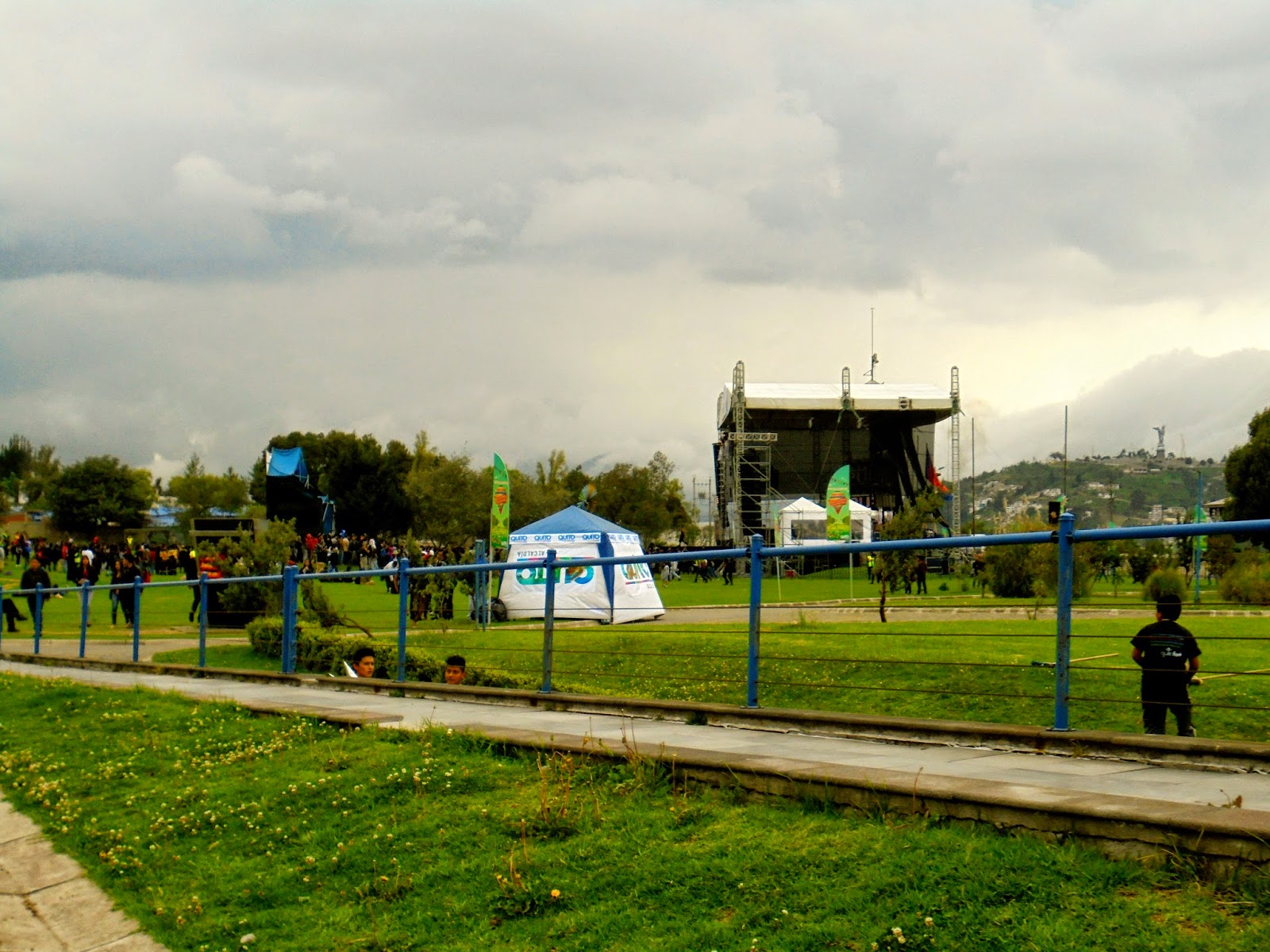 I think I may have damaged my ear drum from being this close to the stage, it was LOUD! 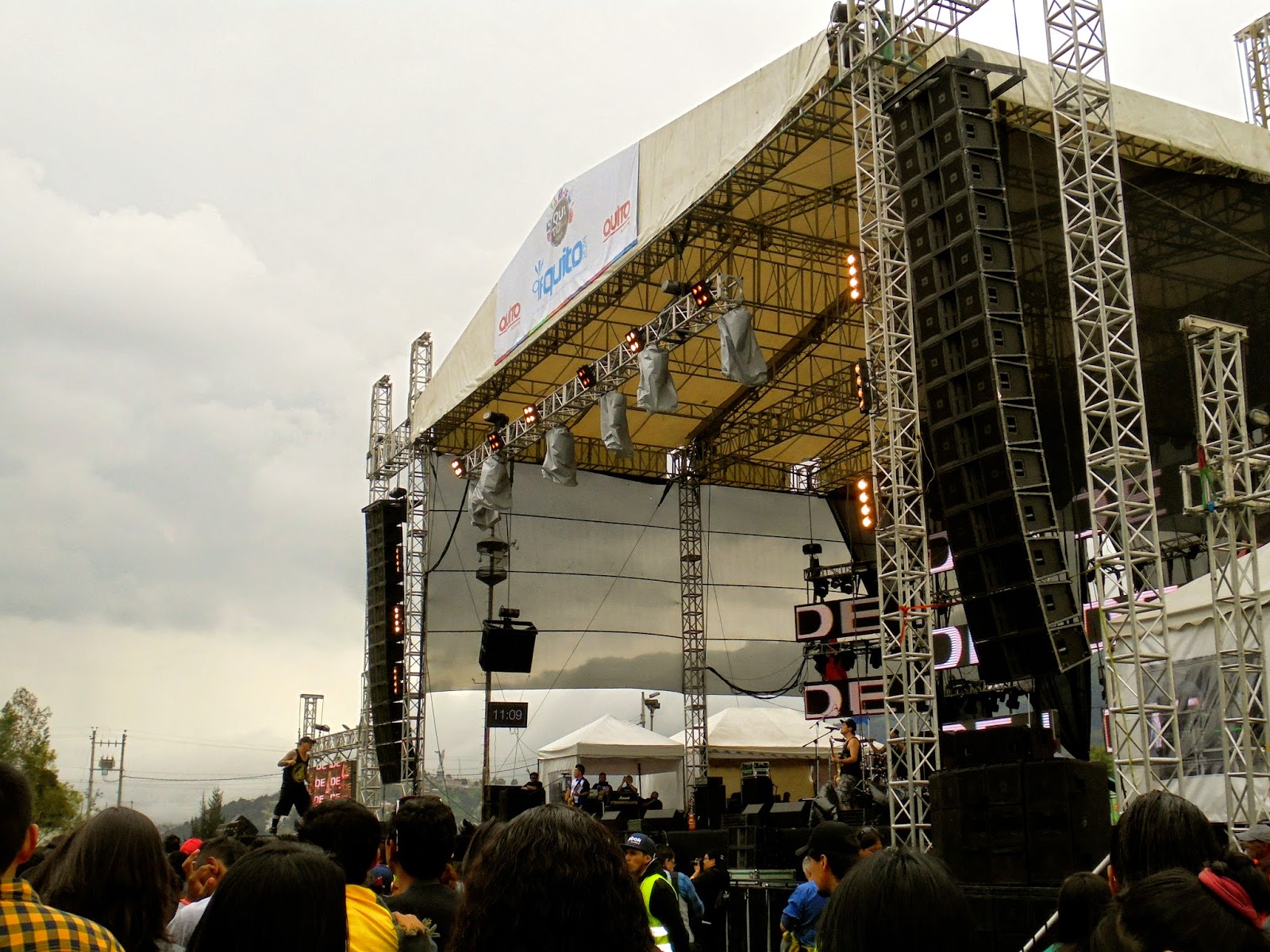 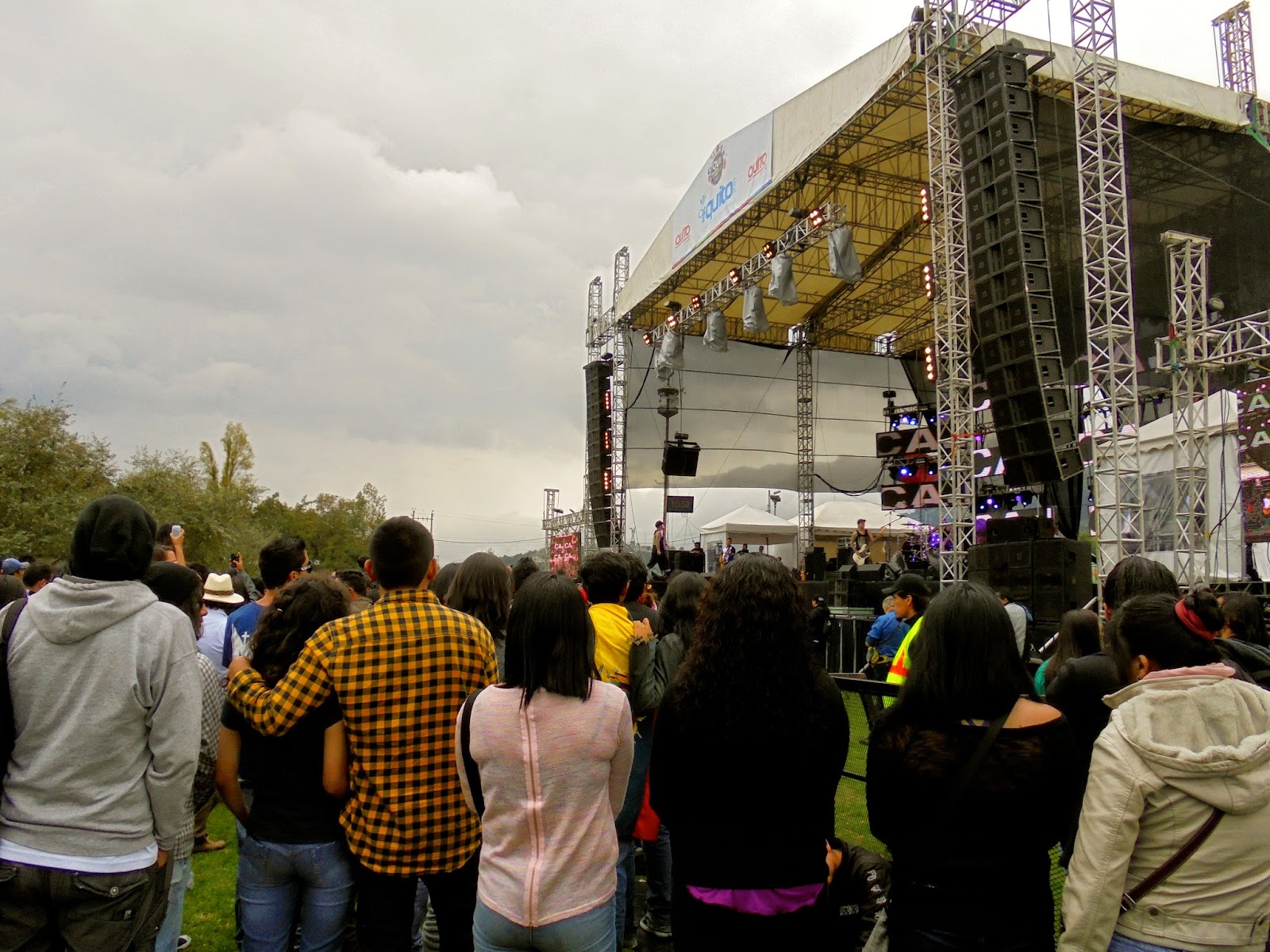 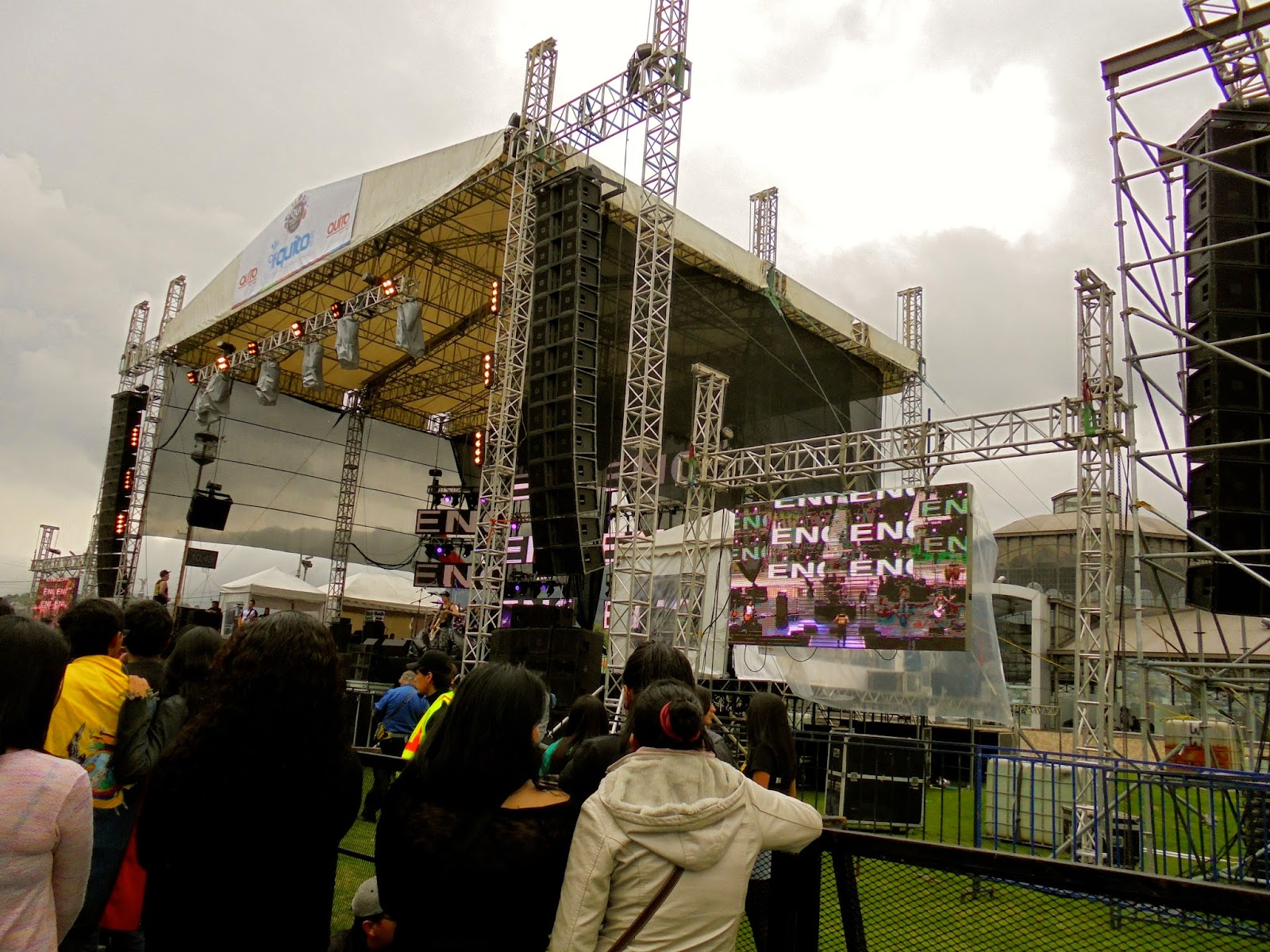 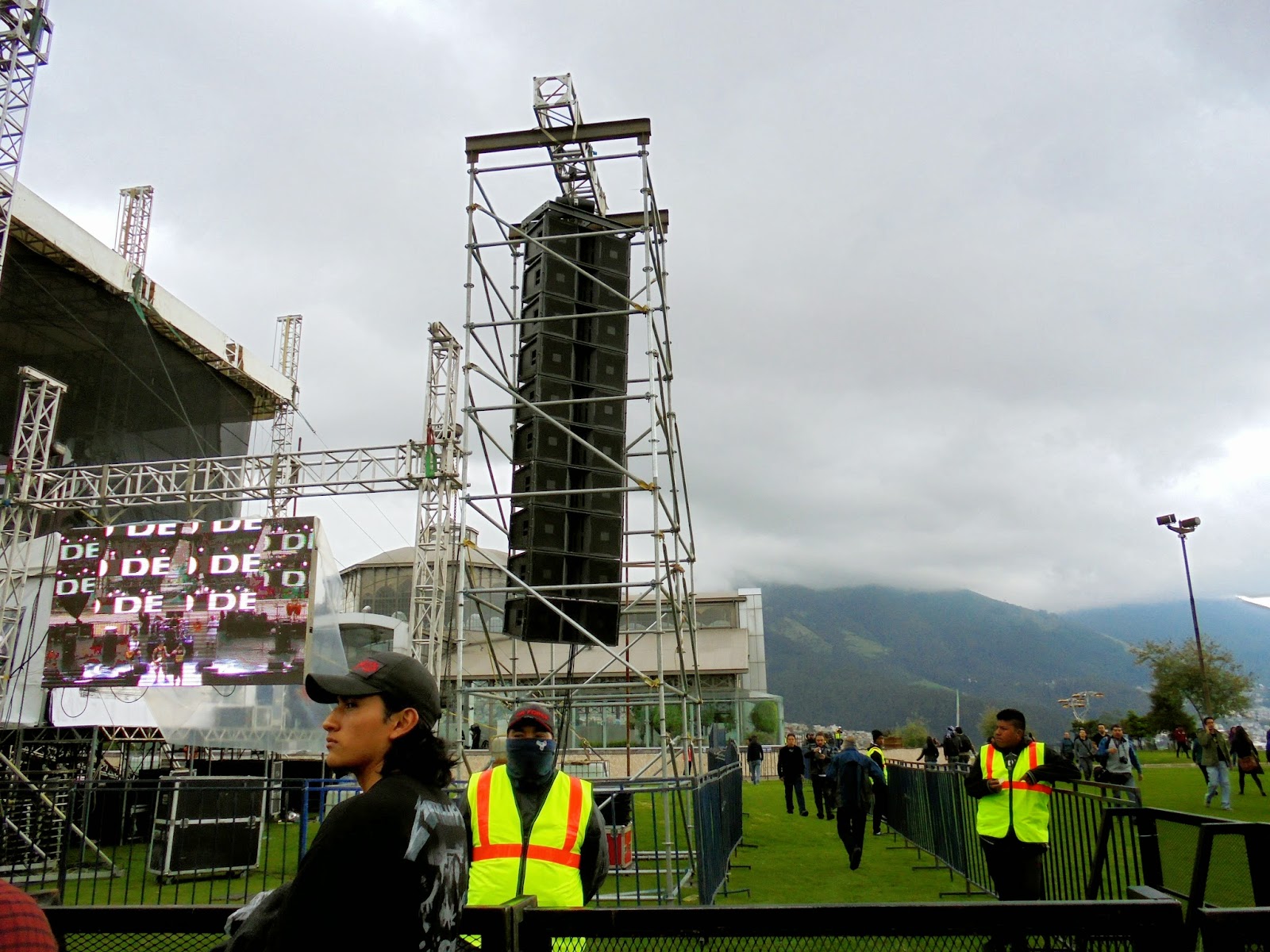 We didn't stick around for too long before deciding to head out and look for other festivities within the city. We grabbed a taxi and as we were driving past this one street we happened to come across various marching bands that looked interesting. Unfortunately we could not get out of the taxi to check them out so I took a few pictures through the taxi window. 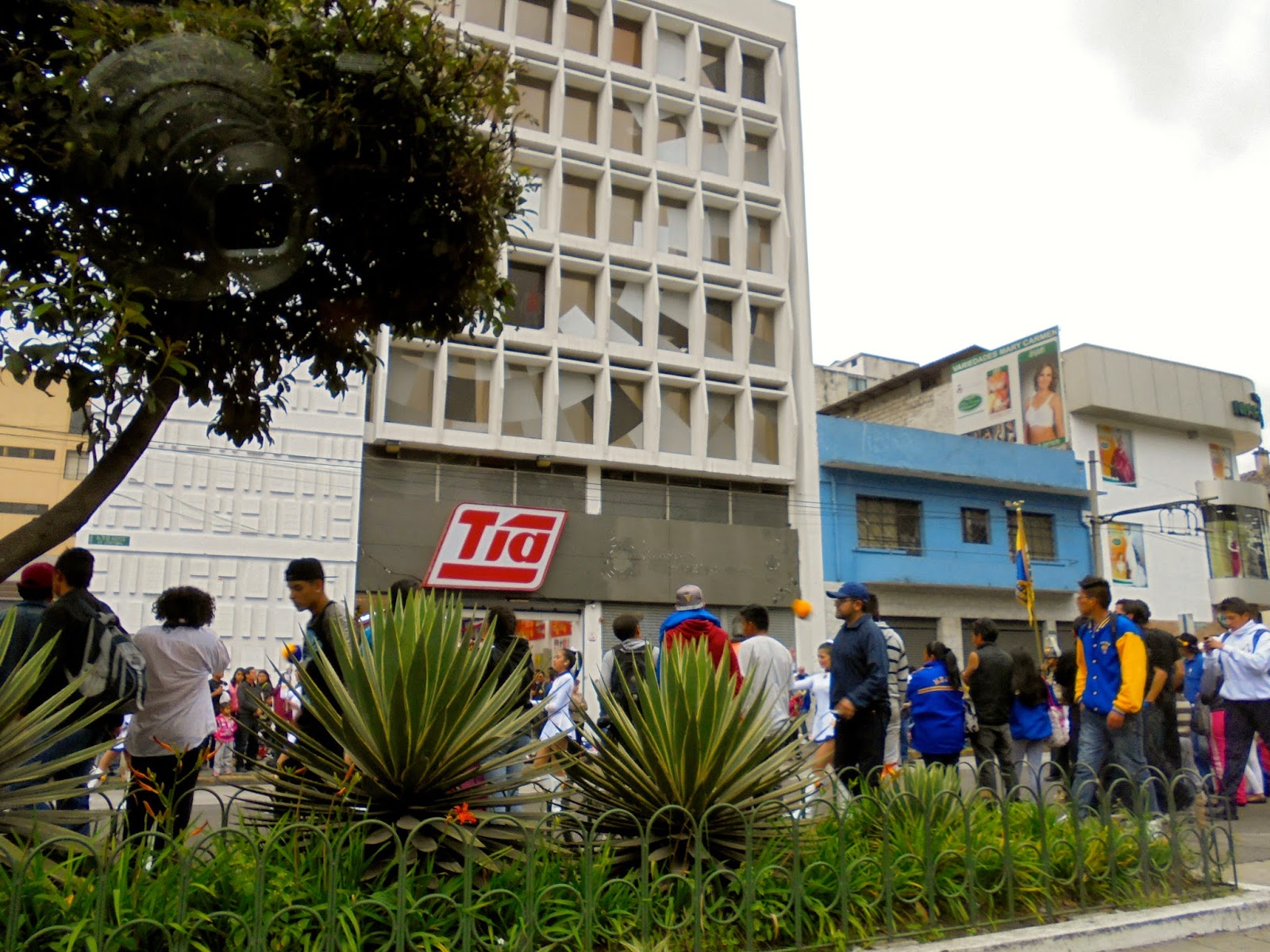 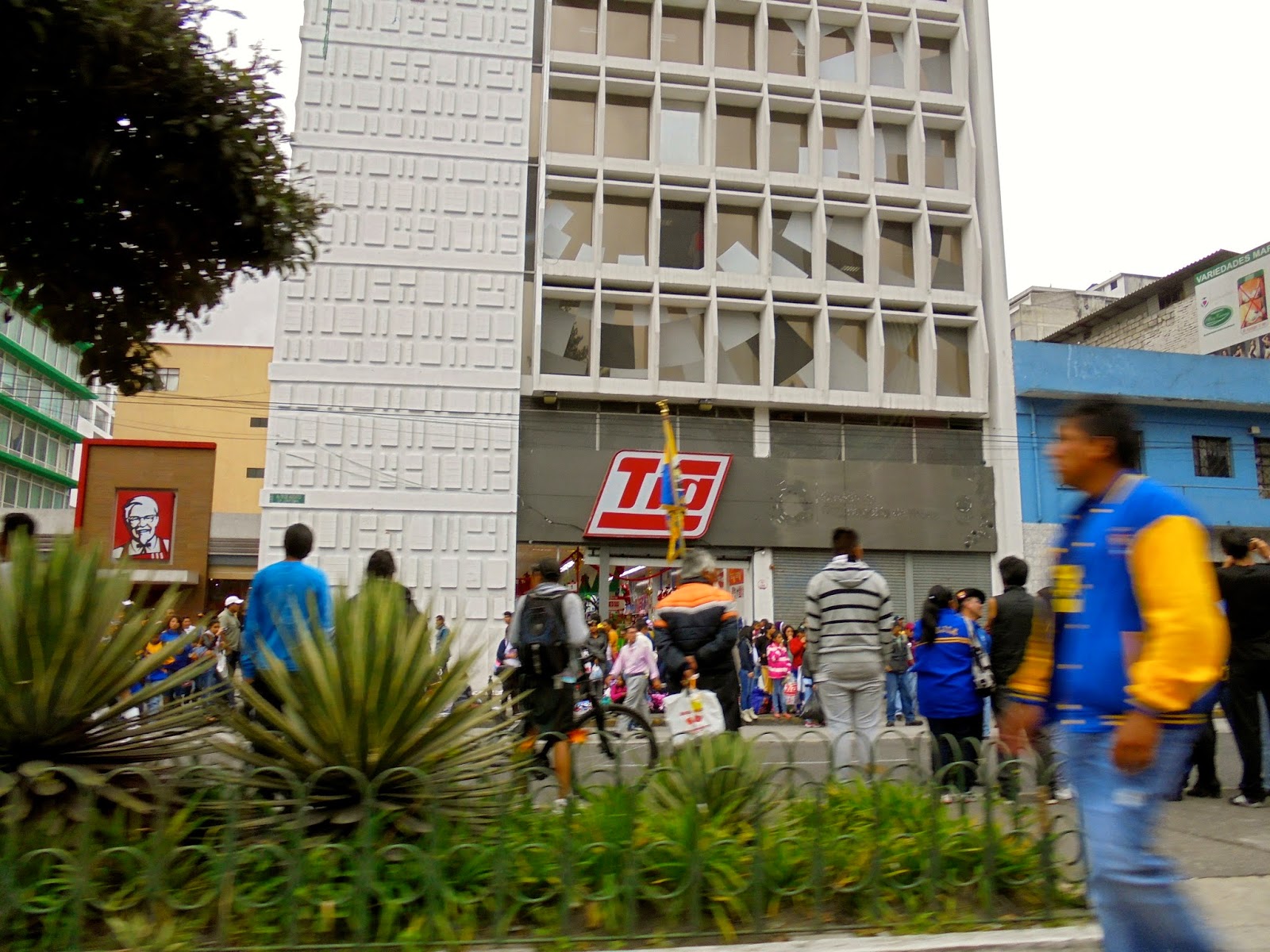 There was even a chiva bus in the mix. Chiva buses are colorful party buses that drive around the city blasting music with people dancing and drinking inside. You can gather a bunch of your friends and pay a determined amount to get a chiva bus so you can party in the bus while being driven around. Looks like so much fun but unfortunately I haven't had the pleasure of being in one. 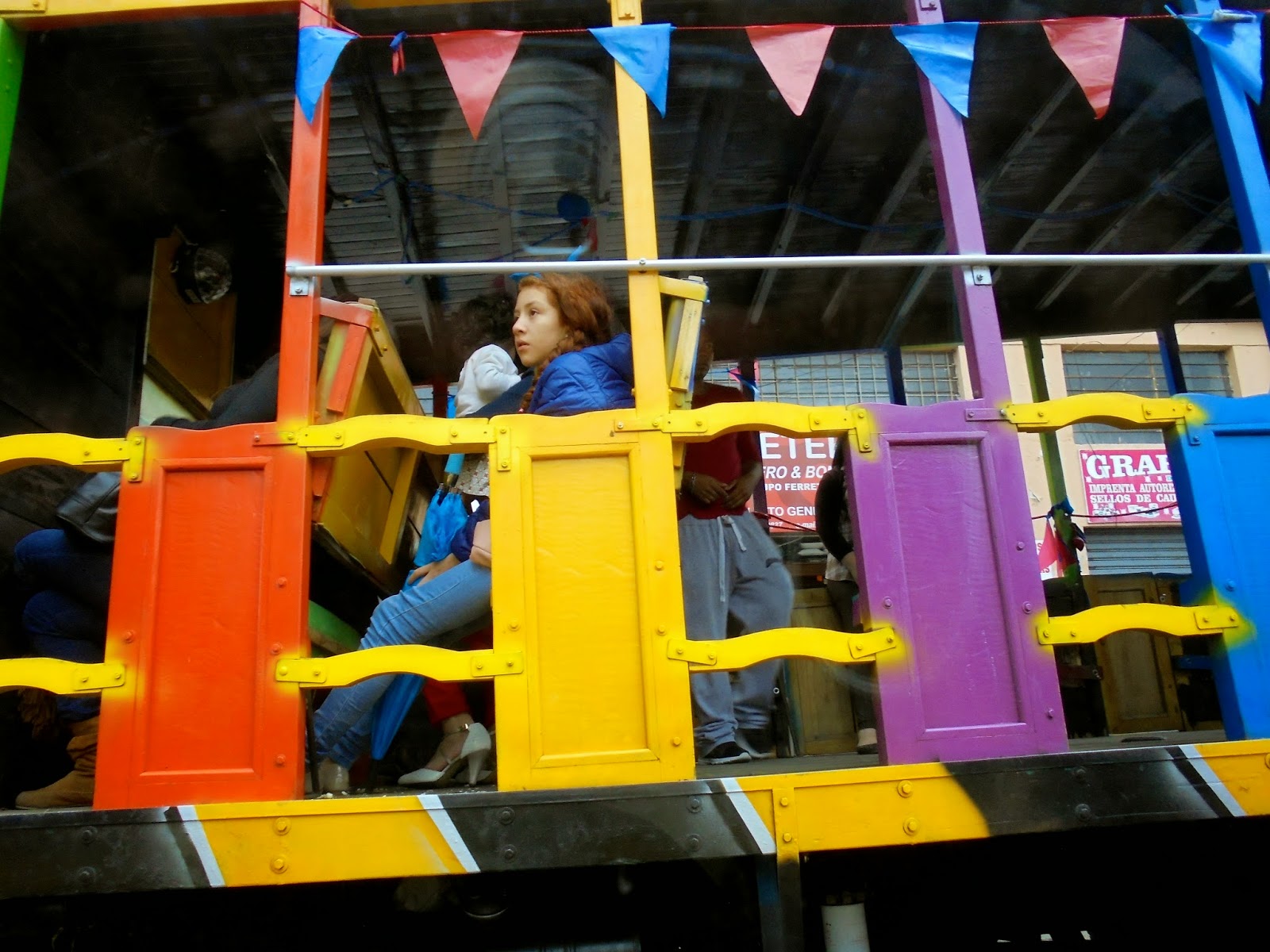 That's it folks, we had to run some errands so unfortunately we never did get to experience the fiestas of Quito in full effect but I am sure there will be other parties to be enjoyed. As we were heading home we found out that Prince Royce, a famous Latino musician whose music we both like was offering a free concert on the same day but it happened to be way far than we were willing to go. It was about an hour away by taxi. Ooh! well, we will continue enjoying his music on youtube.

Random Thought of The Day:

I have to say I have witnessed several incidences where men have been very physically aggressive with women, around here. This doesn't even include incidences where cops have been involved because some guy was physically abusing a woman on the street. One night my boyfriend and I were coming from a club when we witnessed this one guy shoving a girl he was with so hard that she almost fell on the street, if she hadn't bumped into me and broken her fall I think she would have been hurt pretty bad. We were so shocked that we both stopped in our tracks and so did this other Cuban guy. Him and my boyfriend shouted at the guy asking him why he did that but he continued walking with his friends like nothing happened. My boyfriend was so mad he wanted to follow him and confront him but I stopped him because the guy was rolling with a big crowd and I didn't want him to get hurt. Both my boyfriend and the Cuban guy who stopped on the street just shook their heads and commented that they continue being shocked at the level of aggression and violence men display against women in this country.

I was having a conversation with one of my Ecuadorian friends about the issues she was having with her boyfriend. She ended up telling me, "well, at least this one only cheats on me. My ex used to beat me unconscious that I would wake up not knowing where I was." To say I was shocked is an under statement. Later on I came to find out that the current boyfriend had started hitting her as well.......

At our former apartment building there were a lot of Cubans living there as well and most were professors at the local university. One day I was chatting with these two female professors and they were telling me about their experiences in Ecuador. We started talking about gender issues and they were telling me that the level of machismo they see in Ecuador is on another high level that they haven't witnessed in Cuba. This is not to say that there is no machismo in Cuba as well, apparently it's on a different level than here.

There are a lot of Venezuelans that visit Ecuador a lot. I came to find out that many of them actually come here because of the dollar, they get dollars from Ecuador so they can go back and sell them in the black market in Venezuela.

I always have fun trying to guess the nationality of the different Spanish accents I encounter. My boyfriend always points out if I am wrong or right. I am becoming pretty good at distinguishing the various accents. My Spanish has become pretty good that I am impressed with myself.

These factors have contributed to improving my Spanish: I don't have English speaking friends so all the people I interact with only speak Spanish and that also includes my boyfriend. This has given me a great opportunity to practice and improve on the language, I am very dedicated to my Spanish classes and I watch movies and TV shows in Spanish. Talk about full immersion!