The Carnival That Wasn't

Quito has been a bit quiet and boring because most people seem to have traveled to other cities for Carnival festivities. On Sunday I had suggested to my boyfriend that instead of being bored here in Quito, we should take the early morning bus on Monday to Ambato which is like 2 and a half hours away from the city, to enjoy some of the Carnival festivities there before coming back late in the evening on the same day.

Monday morning found us waking up bright and early for the bus ride but shock on us when we encountered long lines at the bus station, all heading to Ambato! I guess I wasn't the only one who had this bright idea..........unfortunately. 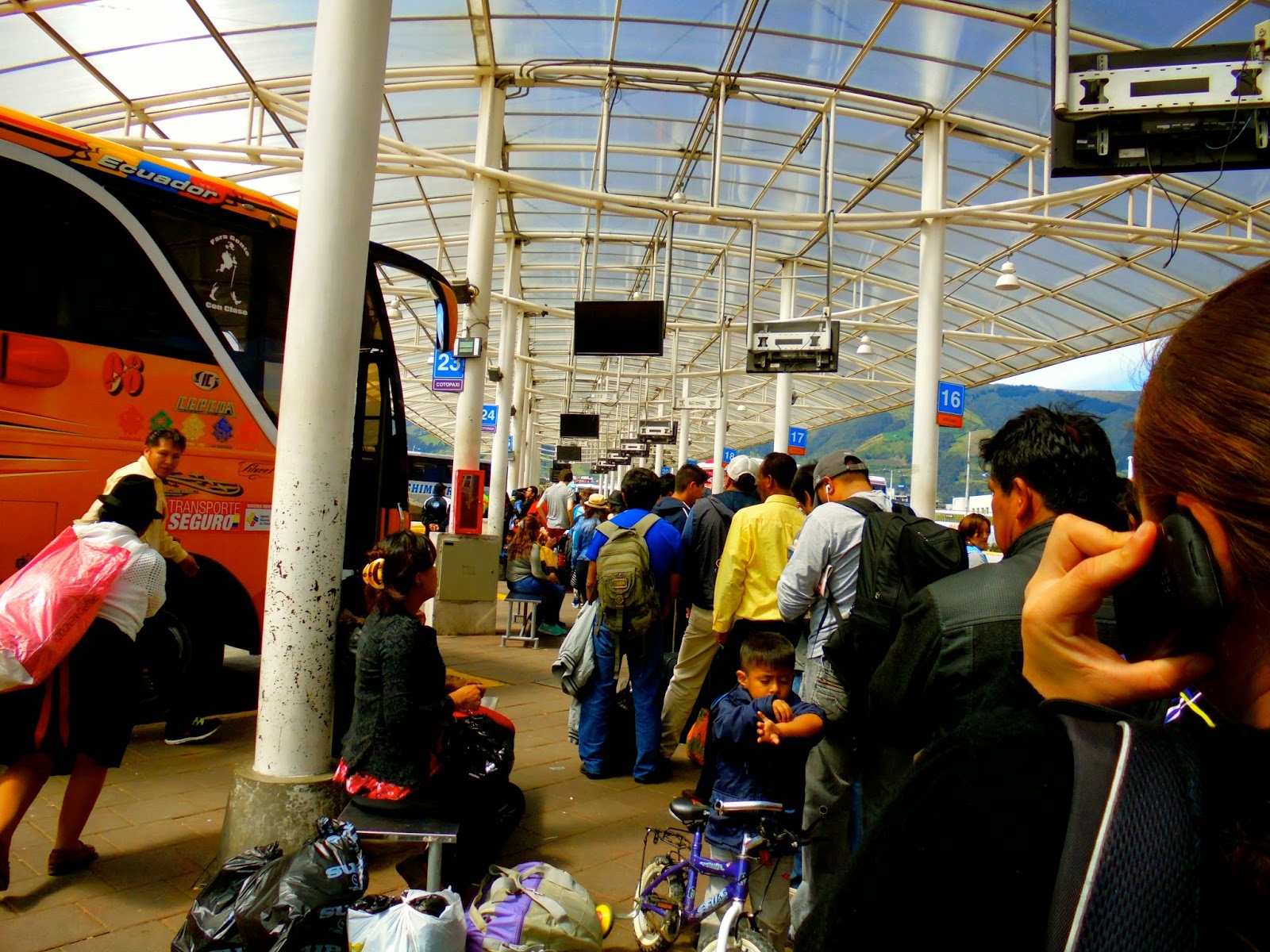 We finally got to Ambato at around 2 pm, yes! pretty late if you ask me. I asked the folks around the bus terminal where the Carnival festivities were because I wanted us to maximize our short time there before heading out. Turns out the parades and performances had been held the previous day (Sunday) so Monday was going to be a slow day but there was a planned parade and various festivities scheduled to take place at..........guess what time? 7 pm!!!! to say I was disappointed is an understatement because by then we would have headed out.

To cool off the disappointment we had lunch first then decided to go to downtown Ambato where we had been told there were several festivities taking place, not as grand as Carnival but nevertheless worth checking out. The sun was out in full force and I could even feel the heat through my jeans but we still made it to downtown on foot, it wasn't that far but with the scorching sun it felt like forever! traffic was a mess and taxis were not stopping to pick up passengers so we had no choice but to walk even though all I wanted to do was find a shady resting place and just cool off from the heat.

Downtown was very lively with so many people around and some small performances here and there. It was cool just hanging out and taking in the whole vibe although I was disappointed at having missed the Carnival parades, Ooh! well, sh*t happens what can you do, right? 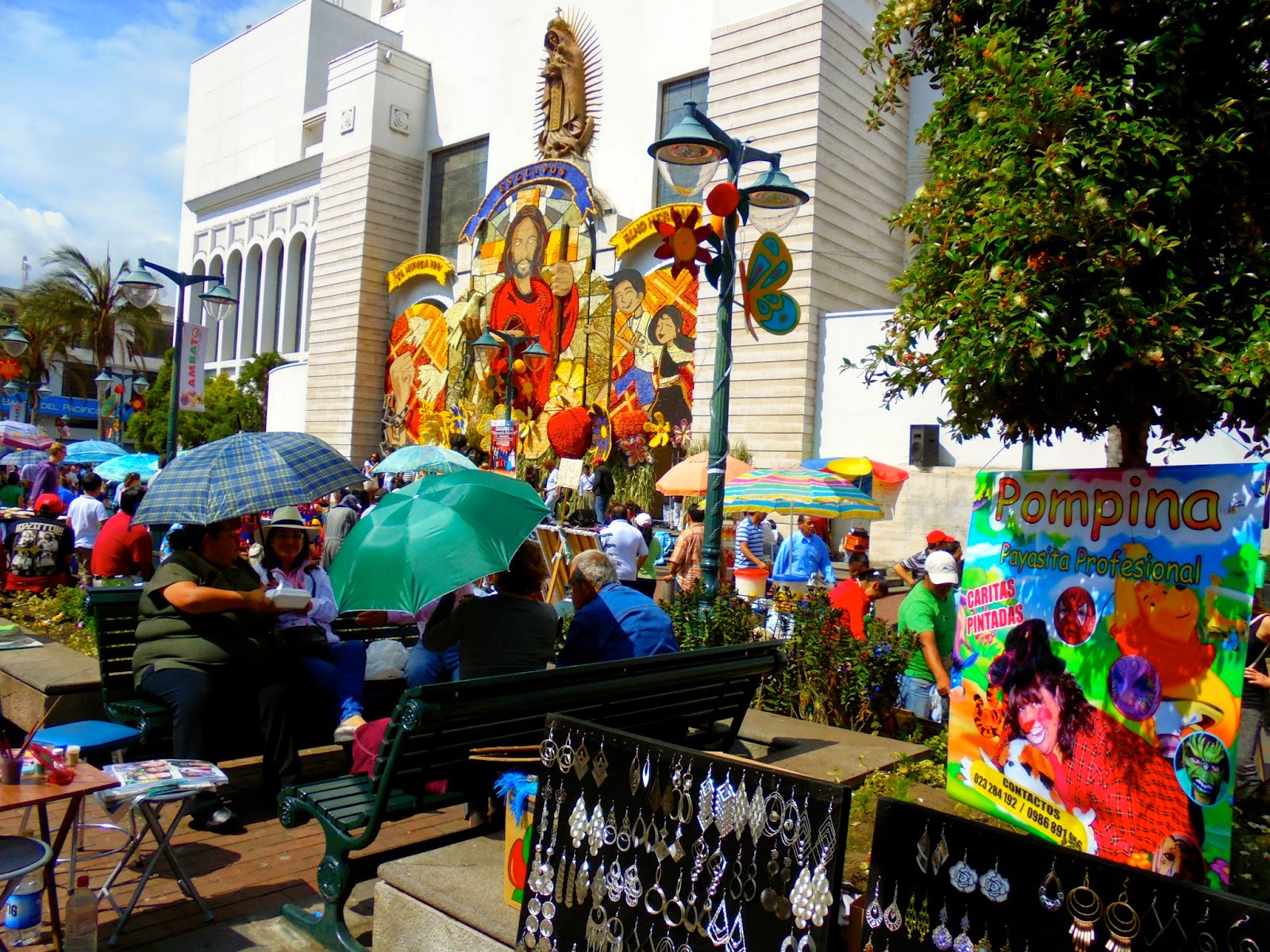 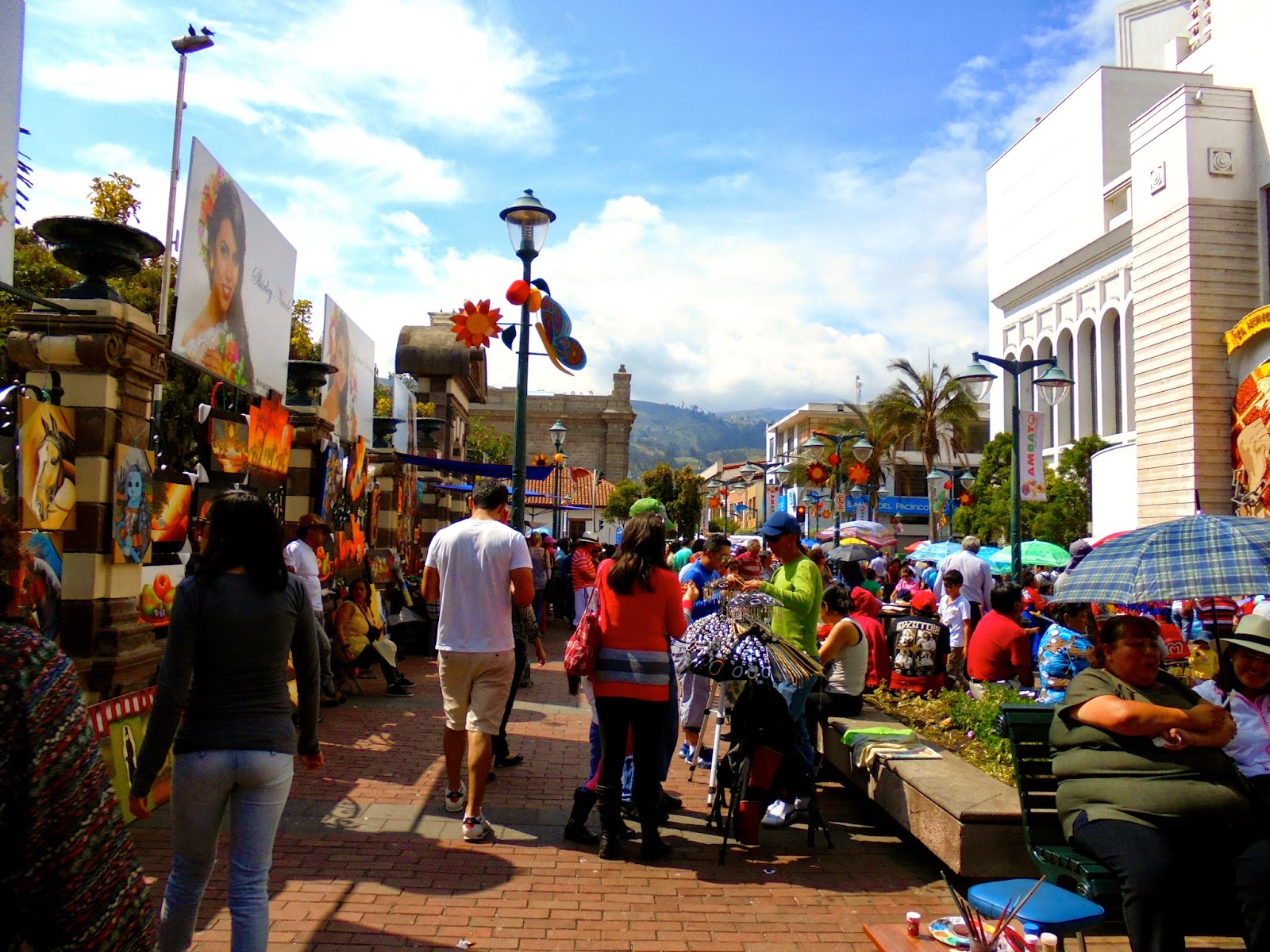 Believe it or not this was made out of flowers, as in REAL flowers. 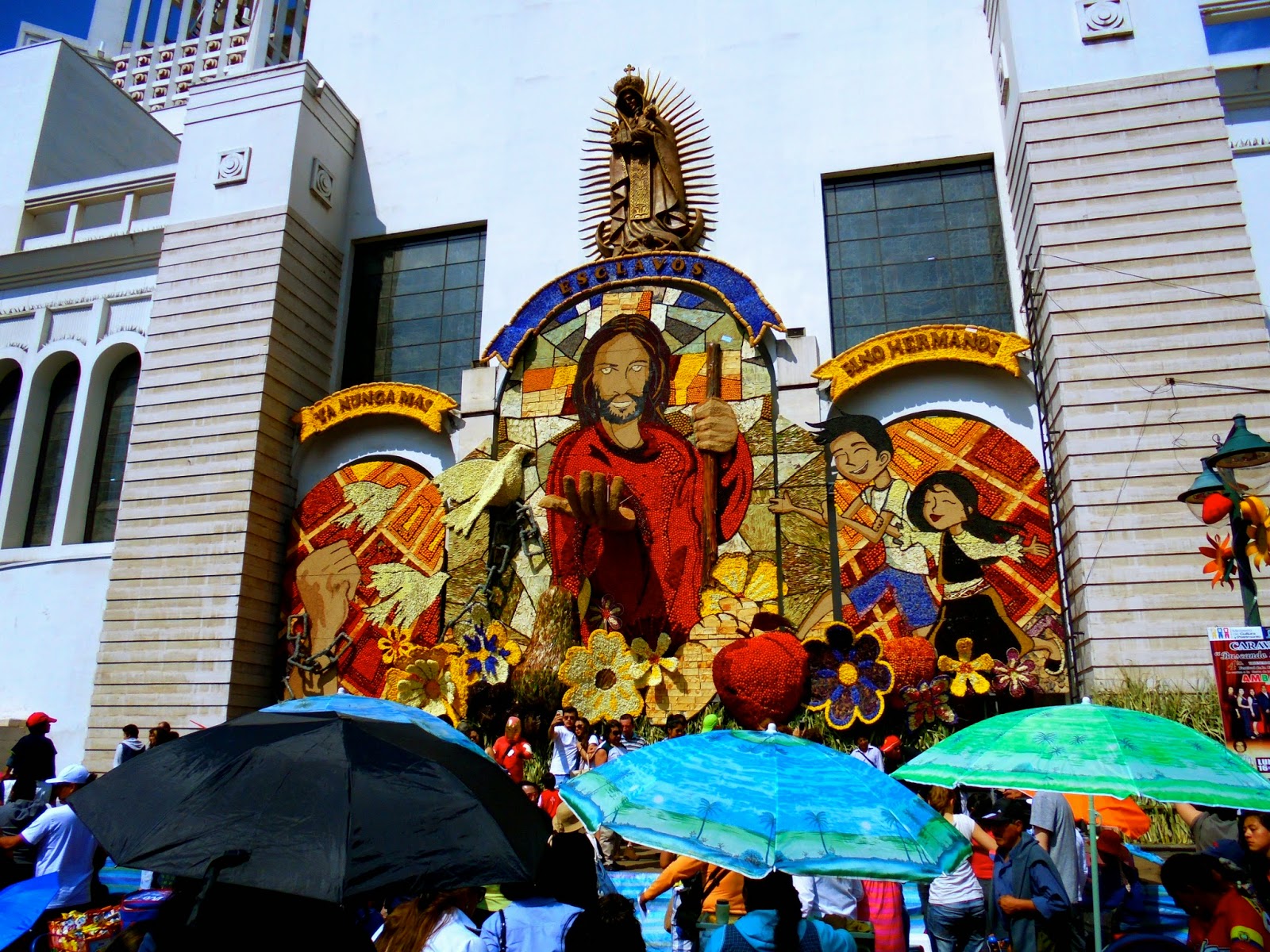 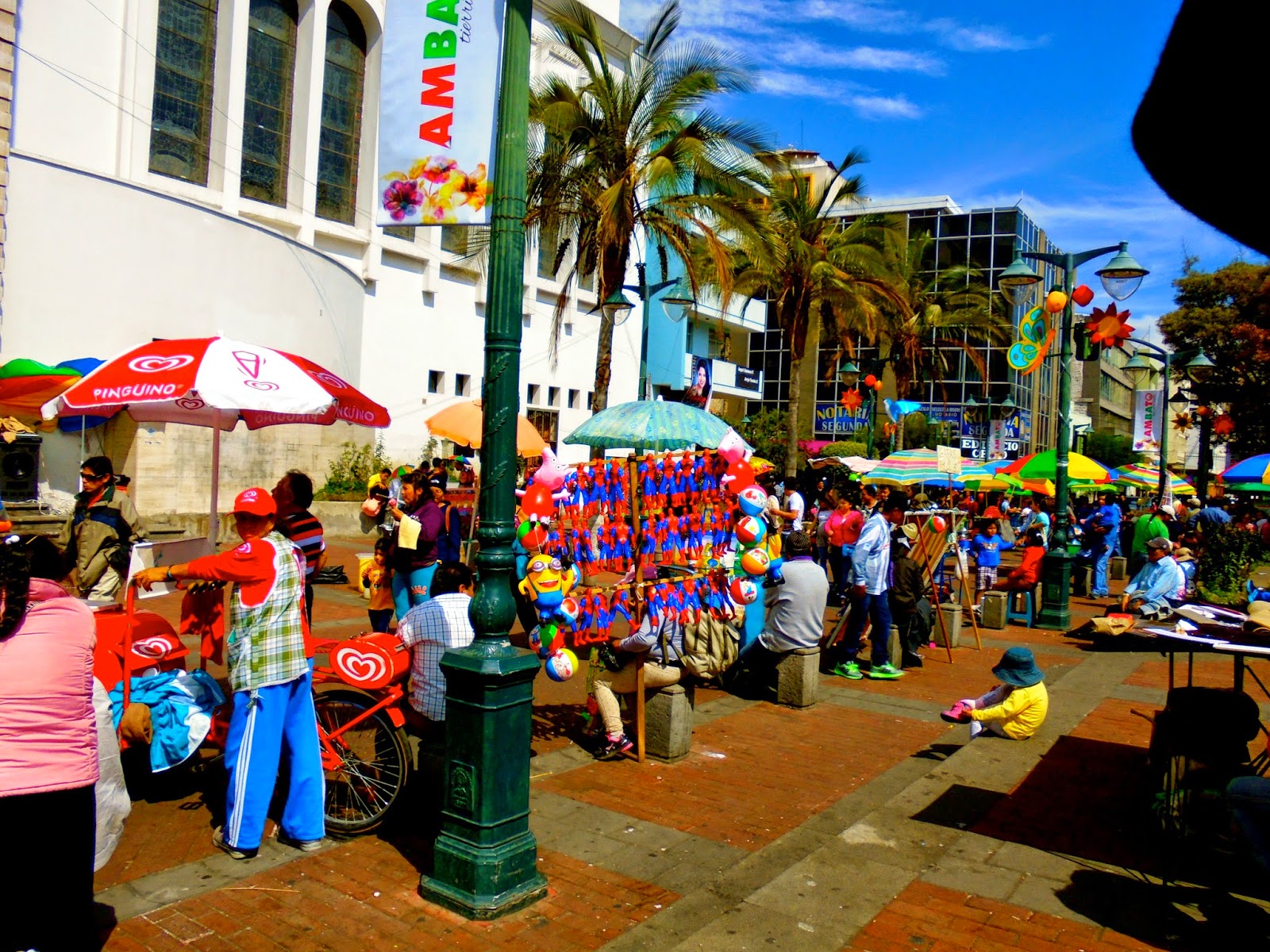 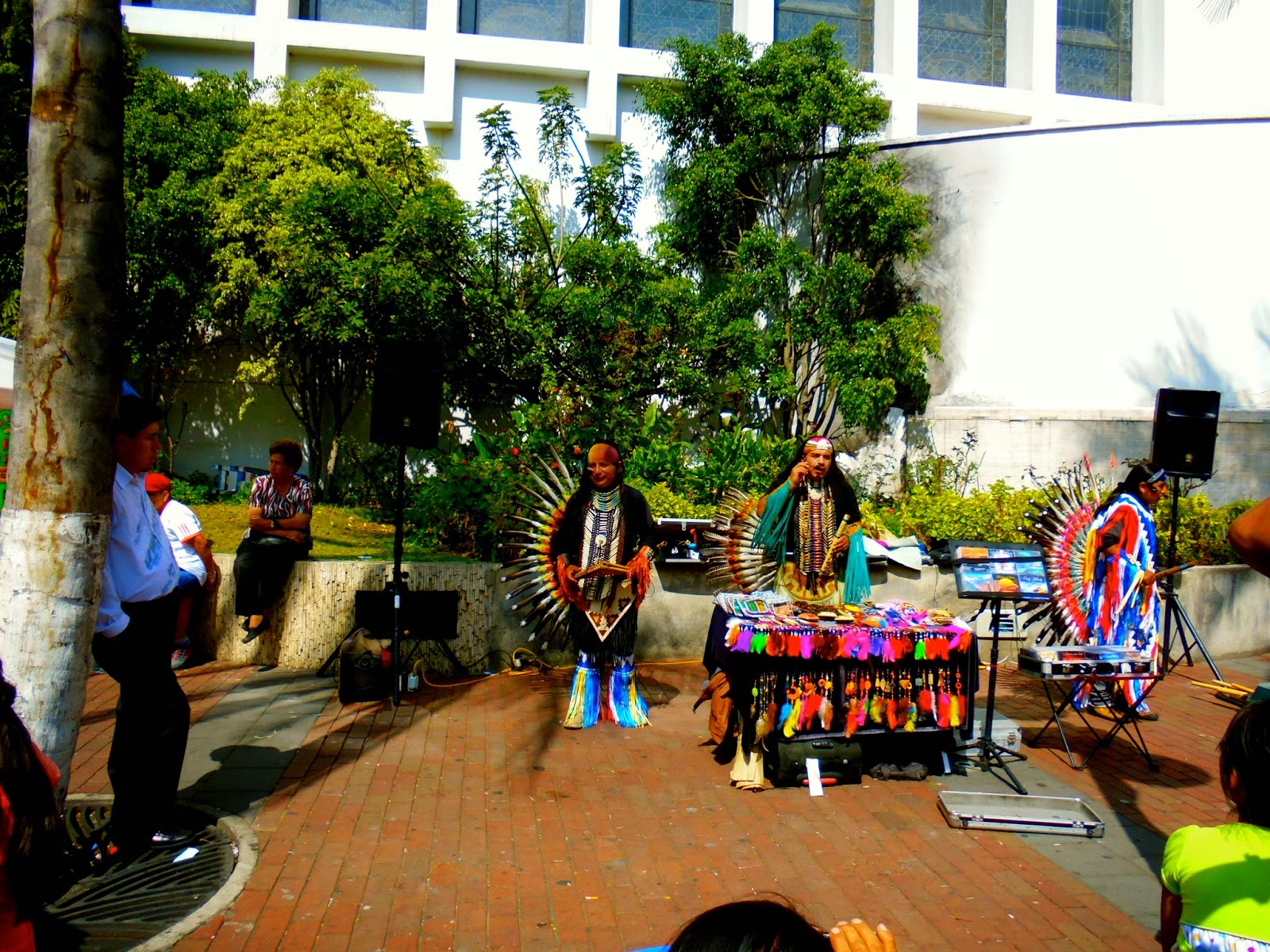 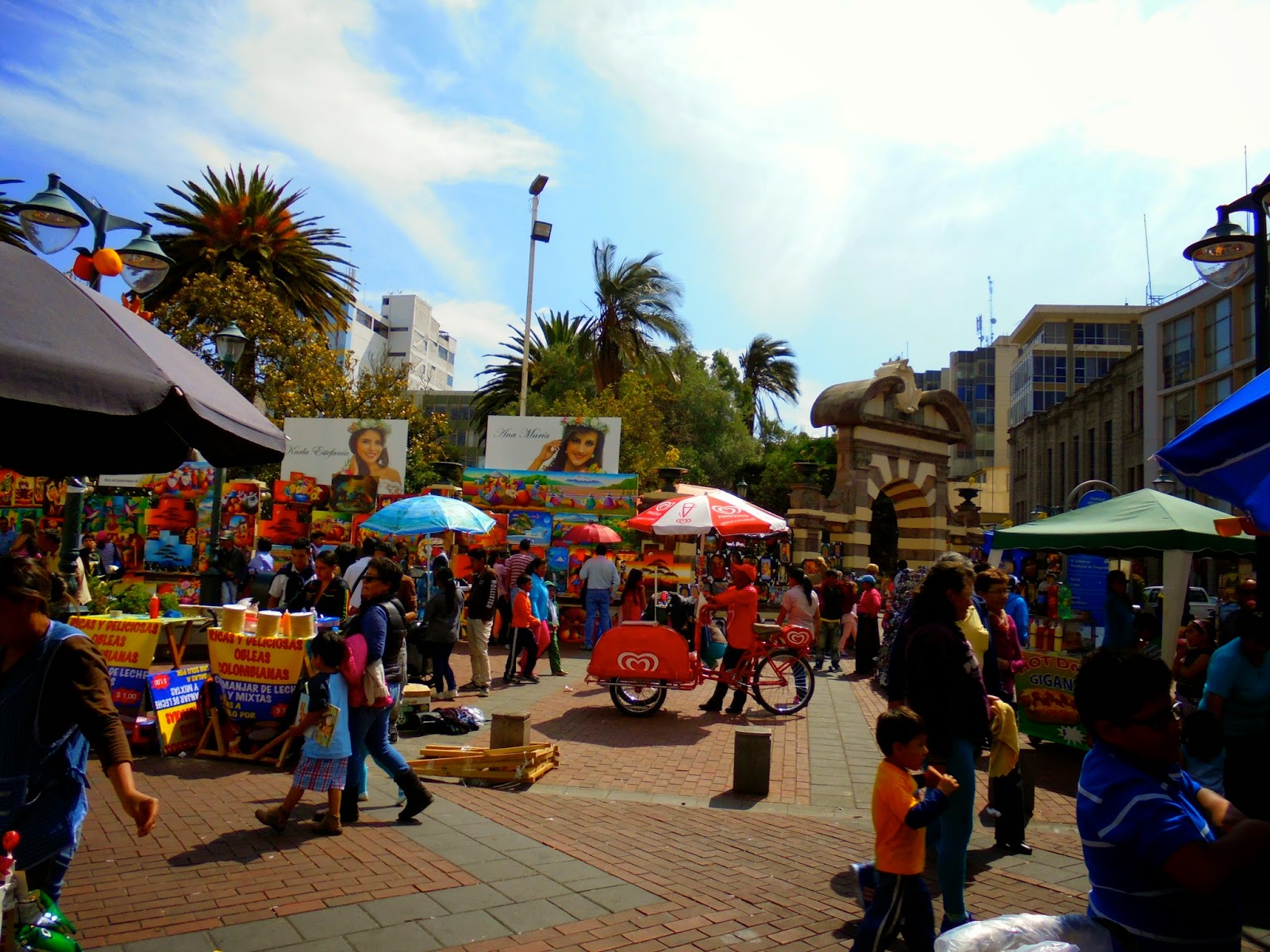 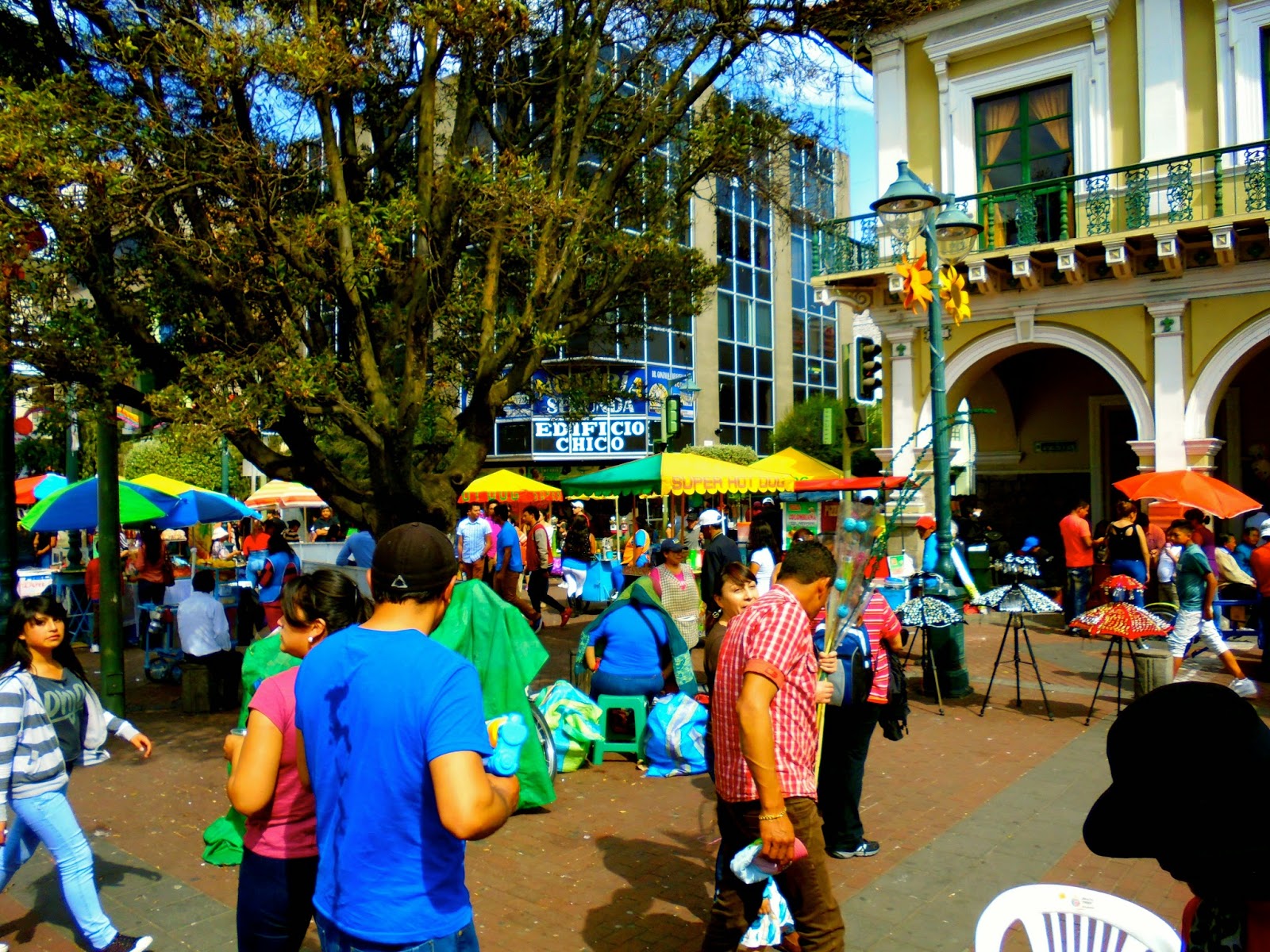 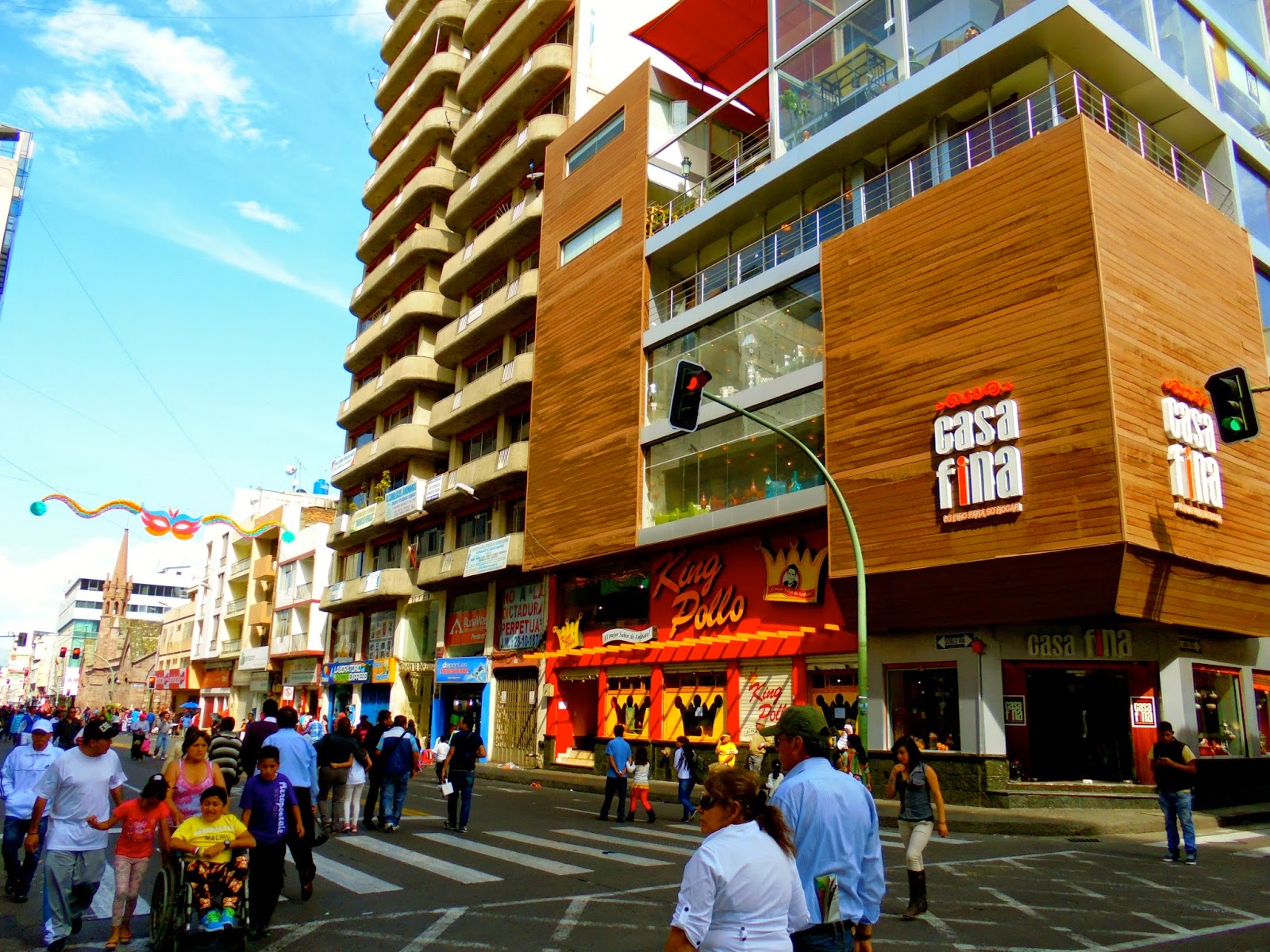 This street was sealed off to traffic so I am guessing this is where the parades had been taking place. 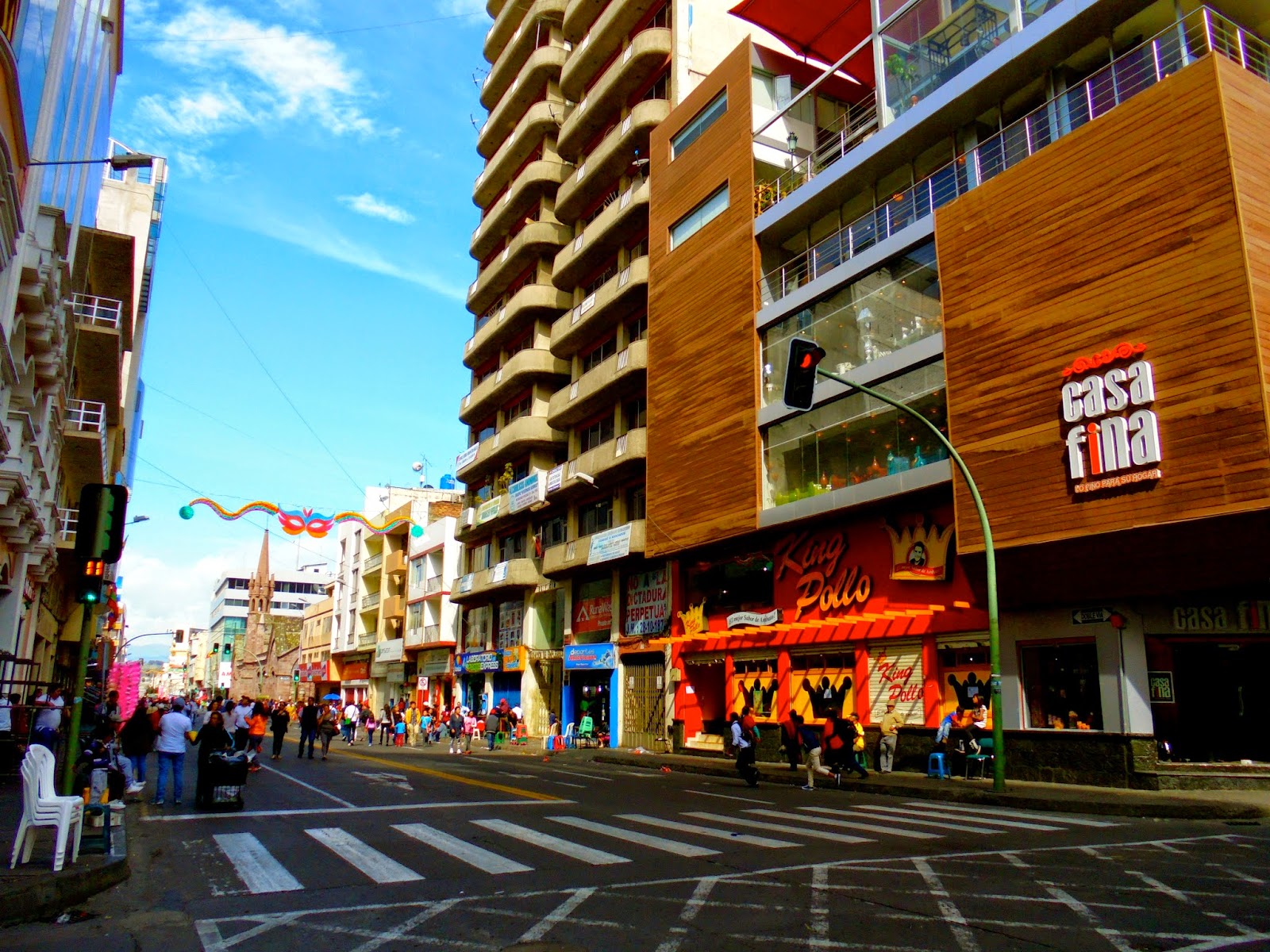 After walking around downtown we decided to head back to Quito because we didn't want to get back too late in the night and none of us wanted to get stuck in Ambato because we had no accommodation.

At the bus terminal there was yet another line we had to make because of people heading back to Quito, I tell you standing out there in that scorching sun waiting to get on the bus was just torture and by the time we got on I was feeling dizzy and had a slight headache. To make matters worse I developed motion sickness which just added to my misery, that was the longest trip ever and I was not alone in my misery because my boyfriend was also in the same position. What a hot mess we were when we finally arrived in Quito.

That's it folks, that trip was definitely not the best but as I say, sometimes you get lucky and other times you don't but what are you going to do about it? try to look on the bright side and move on. For sure I am not taking any long bus trips anytime soon! today being Tuesday, Carnival festivities are still on but we are both content in just staying home and chilling like two lazy bums while getting over the previous day's fiasco. Carnival will always be there and I am sure there will be other opportunities to enjoy the festivities.

Our neighborhood has a lot of dogs and it's like most of our neighbors have dogs of their own. Right across from our building there is a neighbor who has 3 noisy dogs that are always at the roof top. I started noticing that every time I would open the bedroom window which faces the building, the dogs would become alert and rush closer to the window all lined up as if waiting for something. I found it a bit strange until I discovered that my boyfriend has been feeding them by throwing treats through the window so the dogs have become accustomed to it. Now whenever the dogs hear our window opening you should see how they quickly rush to line up so they can get a treat, It's actually really cute but I am nervous that the neighbor might start complaining.

Our next door neighbor has been MIA and we were wondering what happened to him until the landlady showed up one day and we got to chatting. Apparently dude owes 3 months worth of rent and every time the landlady wants to kick him out he gives her the most angelic look (her words not mine) so she gives him more time. Funny thing is dude shows up end month to get the $10 we pay him to share his internet then disappears once again, last time he stopped by for his $10 he looked really jittery and it got me thinking that maybe he uses drugs or something. You should have seen how relieved he got when I gave him the $10, it's like his life depended on it........or maybe his next fix depended on it.

Speaking of the landlady, when she stopped by she got too chatty and before I knew it she was sharing her marital woes with me. What can I say, I am a sucker for comforting people in need so you should have seen me patting her shoulders gently and giving her mini hugs as she poured out her heart. This woman is old enough to be my mother so you can imagine how awkward it felt giving her my opinion (I felt like it should be the other way round). I guess she really needed to talk to someone, she ended up chatting for at least 2 hours and even though I had a friend waiting for me on Skype I just didn't have the heart to interrupt her. I can never look at her husband the same way again, that's for sure!
- February 17, 2015