There are certain things I have noticed during my stay here in Mao, Dominican Republic so let me go ahead and share my observations:

All the kids I have been around so far all have one thing in common, they are all mouthy and have some quick come backs that leave you speechless. Sometimes I get so shocked and tongue tied that all I can do is laugh. A few examples: My fiancé and I were hanging out with his little cousins and nephews when he commented that he liked one of the paintings that his mom had in her house, this one kid looks at him seriously and retorts, "so? take it with you then!" my fiancé looked at him in shock and didn't even know what to say so we both just started laughing then later on we tried explaining to the kid that just because you like something doesn't mean it's yours for the taking.

At my father in law's farm we were hanging out with some nephews and nieces and one of the kids who is a bit moody didn't want to play with the other kids. My fiancé's little sister got so frustrated with her and started shouting, "who brought this child here? why is she here? take her back to her mother!" I will guiltily admit I couldn't help but burst out laughing with everyone else, hey! don't judge me but all these come backs said in Spanish sound incredibly hilarious!

It seems like most if not all women here love straight hair free of any curls whatsoever and they will go through great lengths to maintain their weekly blow outs that they get at the hair salons. Walking around you will notice women with hairnets on their heads or rollers or both. Under the hairnet they have their hair wrapped up to prevent frizz. One of the sister's in law who is a hair dresser was telling me that because of the heat many women cover their hair to protect it from sun damage plus it's hard to maintain straight hair with the heat which causes frizz so the women wrap up their hair during the day and let it out at night when the weather is a bit cooler, or they let down their hair if there is something special going on. Not all women walk around with hairnets though but you will definitely notice the hairnet thing. Even in the plane on my way here there were several women wearing hairnets and when we landed those hairnets did a fast disappearing act, it was actually funny. Personally I think curly hair is beautiful so I don't understand why some people would think otherwise, but to each their own.

They start them young.......you get the general idea. 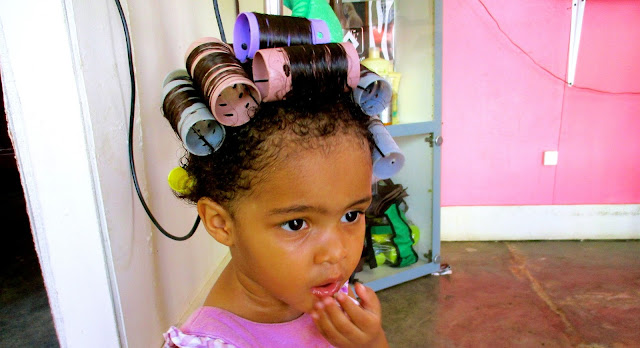 I swear the lack of boundaries here just amazes me, people can ask you the most personal thing without thinking how inappropriate it may be. I will go ahead and give an example.

My fiancé's family is very mixed and even though they all share the same father and mother, some of the siblings don't look alike. I was hanging out with his mum, one of his sister's in law and some of his brother's friends when one of them asked his mum, "but how come some of your kids look very different from each other? are they all from the same man?" both the sister in law and I were shocked and we told him it was rude to have asked that, he laughed before responding, "it's not a big deal, women here have no shame." Honestly how do you respond to that? we all just burst out laughing, even the mum joined in.

Tell It As It Is:

Example 1 - The sister in law asked this one girl, "you have become really big! are you pregnant?" she said no, the fiancé's mum chimes in, "you are getting too fat! you better do something about it."

Example 2 - We were driving around with one of my fiancé's brothers when he saw this girl walking around with a crop top exposing her stomach, the brother rolled down the window and shouted at the girl, "have respect for yourself! if you want to show your stomach go to the gym please! meanwhile, hide that thing you have" the girl started laughing and looked so unfazed as she sashayed across the road. By the way women here are not self conscious at all about their bodies. They will dress however they want regardless of their sizes and they will walk very confidently outside without caring what anyone thinks.

Example 3 - We visited one of the uncles for dinner and he went round introducing me to the family, when he got to his youngest daughter who is about 18 yrs old he tells me, "this big one is the youngest one" then he playfully pinches her chubby arms for emphasis. The rest of the family starts laughing and pinching her chubby arms for even more emphasize.

There are many examples but the few I have given you give you an idea of how people tell it like it is whether you like it or not.

People here gossip like its going out of business tomorrow. In the evening when the heat has subsided a bit, people take out their chairs and sit outside their houses or shops to gawk at those passing by and to gossip. The gossip is not even done discreetly, you will clearly know someone is gossiping about you and they have no qualms about being so obvious.

I had to be very stealth taking this photo so that no one would notice what I was up to, this gives you an idea of how the gossips operate.

Every Spanish speaking country has their own distinct accent thats unique to their specific country. I get a kick out of hearing how Dominicans shorten their words and phrases and how they pronounce certain words, by now I am used to their accent but sometimes when someone speaks to me rapidly I get lost and have no clue what they are saying until they slow it down for me. A few examples of how they shorten their words and phrases: Dice que (he/she says that) becomes dique, Como estas (how are you) becomes Como tu ta? the letter R is pronounced as L so verde (green) becomes velde, amor (love) becomes amol.

That's it folks, there are many more observations to write about but I will stop here as I don't want to go on and on. Besides, I am tired and need to take a long cold shower to cool off from the heat so until later, adios!