We moved to a new apartment last week and I love the new place and the neighborhood. Let's just say I am glad we got out of our old apartment, we were paying a bit much for a dump and the caretaker was just a shady scumbag. Anyway, let me not raise my blood pressure by thinking back to that old apartment so let's focus on our new place.

We found a really nice mini apartment (mini departamentos as they are called here) in a nice residential area and we couldn't have asked for a better place. Trust me, after seeing some of the "apartments" we had come across, this one was a gold mine! I swear some people just dig holes in their basements, plaster some paint and deem such hell holes as mini apartments ready for rent.

The apartment needed some cleaning and paint job but despite that we saw great potential. In Ecuador when they rent out an unfurnished apartment you are getting a completely empty space with absolutely nothing, not like the US where the apartments come with refrigerators and cookers. Here you will have to buy everything! the owner had promised to clean and paint the place for us before moving in as she should but I guess promises and obligations are pretty expensive around here that's why some people hardly keep them. We ended up doing everything by ourselves and my boyfriend who is very good with his hands was the one who put in most of the work in the place, I give him a lot of credit for that. He painted the apartment, cleaned it up really nice and fixed the lighting and shower head. Yes, there was no shower head in the bathroom, there was just an open pipe and we had to buy an electric shower head so we could get hot water.

Without further ado let me take you on a tour of our neighborhood first before we get to the apartment. You see the mountains in the background of the picture below? well, we live up toward those mountains. Let's just say a walk back home is like a session on a stair master machine, it's not a joke! the street may look flat in the picture but it is actually quite steep as you head toward the mountains. 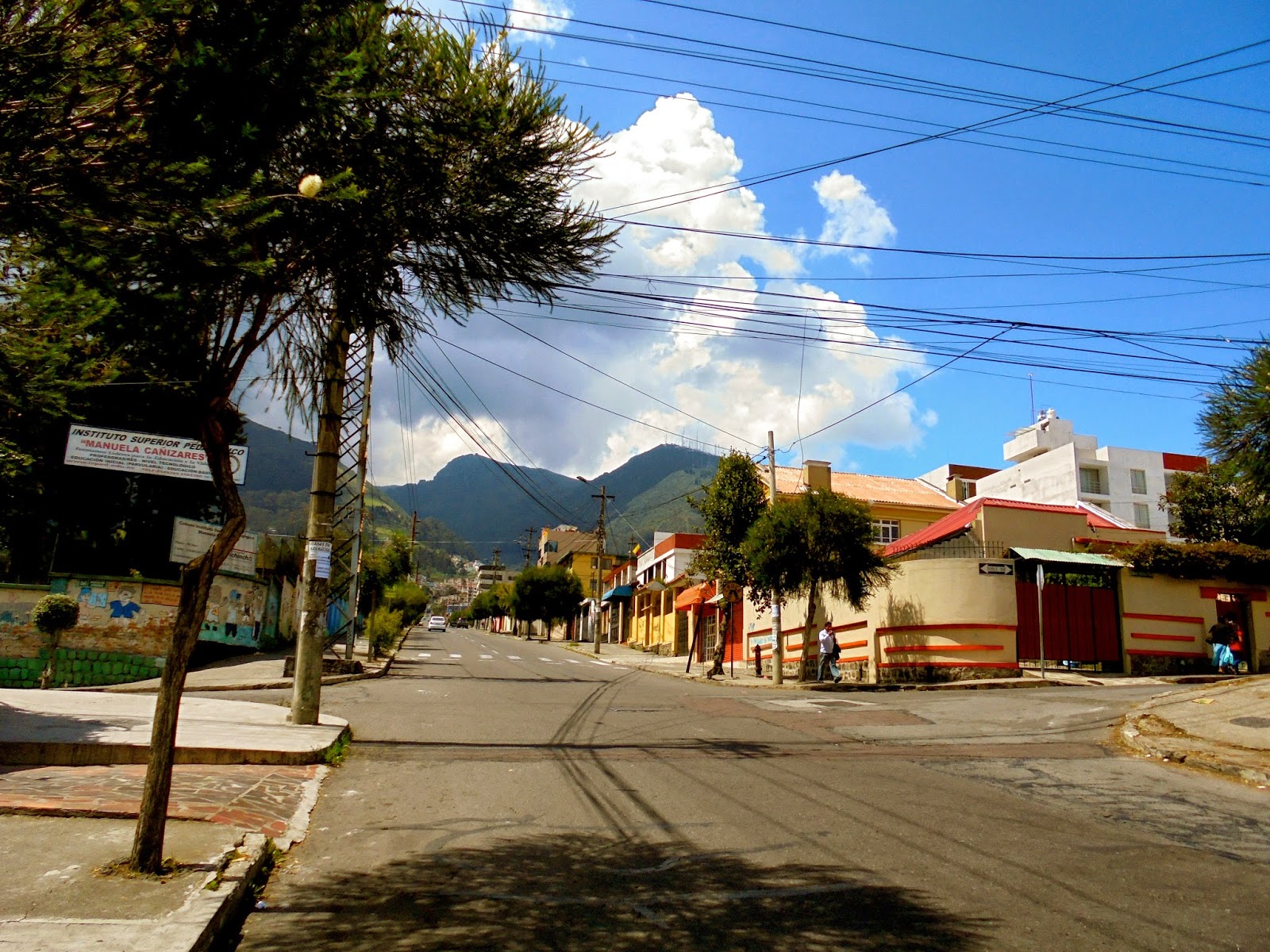 We have our local Lavanderia where we get our laundry done, by the time we get it back it's been ironed and folded so nicely that you just want to keep it in that state permanently plus it smells so good! the owner is such a sweet man and every time we pass past his shop he never fails to wave to us and exchange greetings. Ooh! did I mention he gives out candy when we go pick up our clothes? what's not to love about this place??? 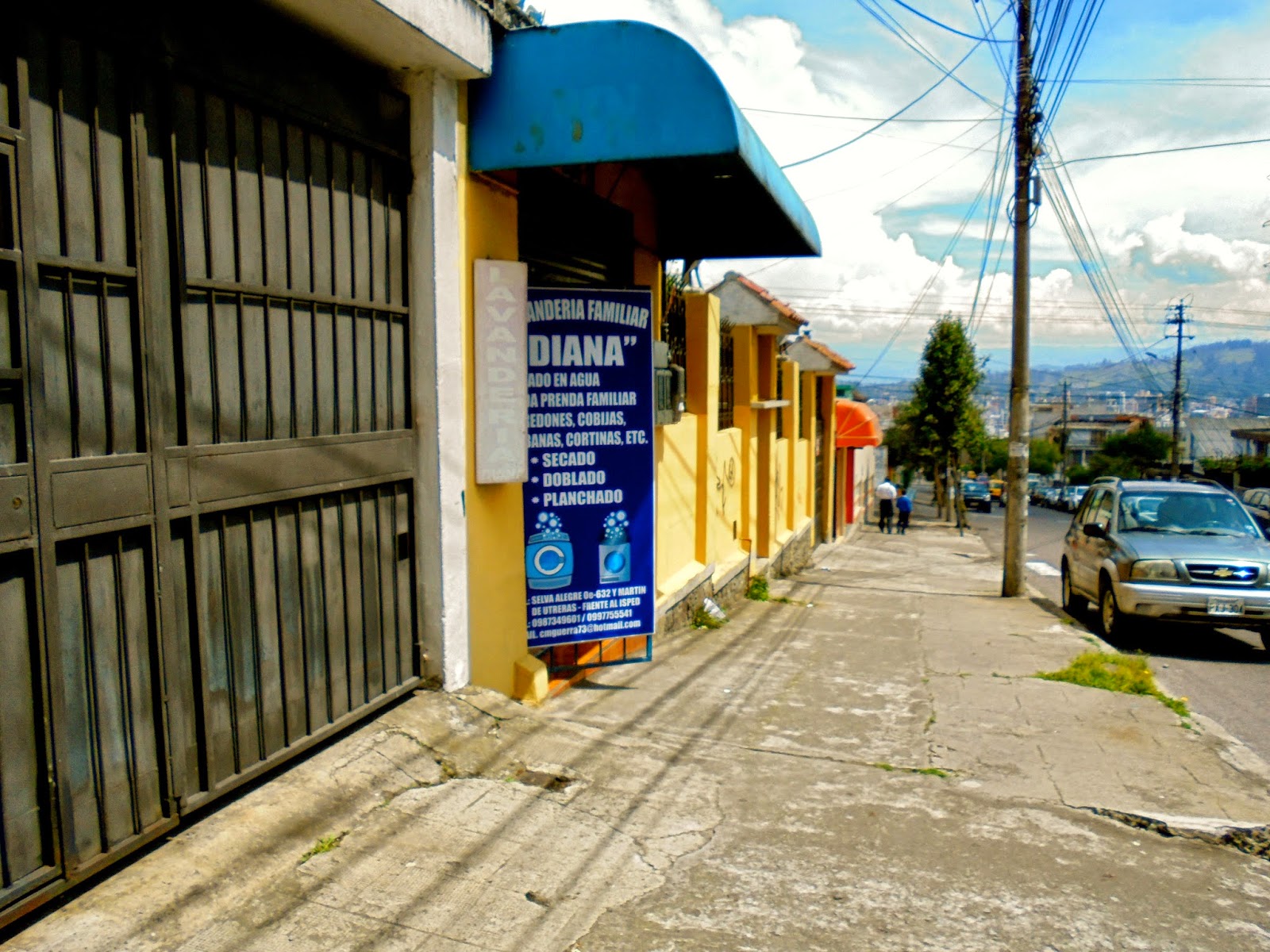 This is the alley that leads to our apartment entrance, you see the sign that says "Viveres?" our apartment entrance is right next to it. The sign belongs to our local Tienda where we can buy little things we need for the house, it comes in handy when we need something like milk or bread and we don't feel like going all the way to the major grocery stores. 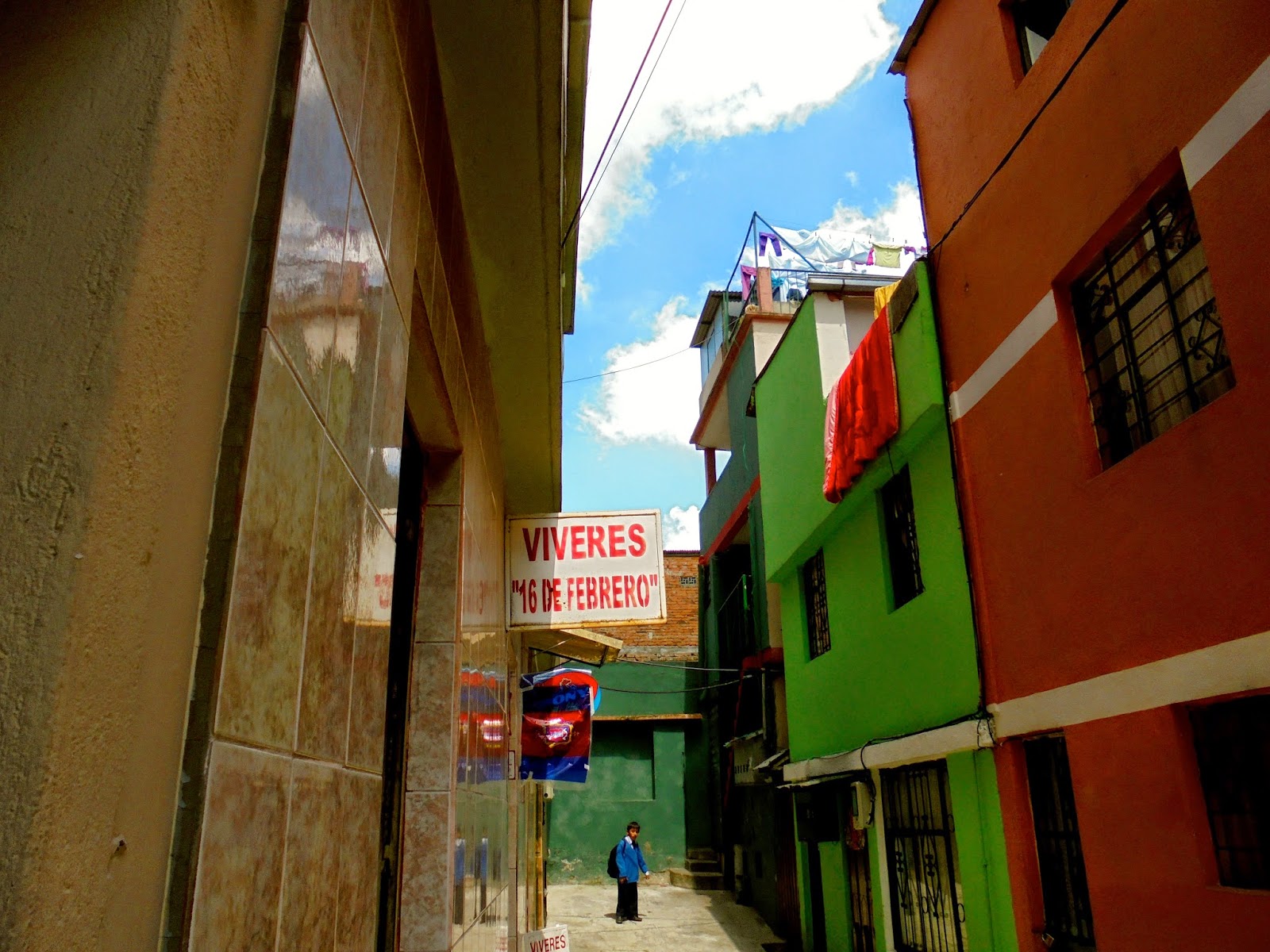 This is our apartment from outside. 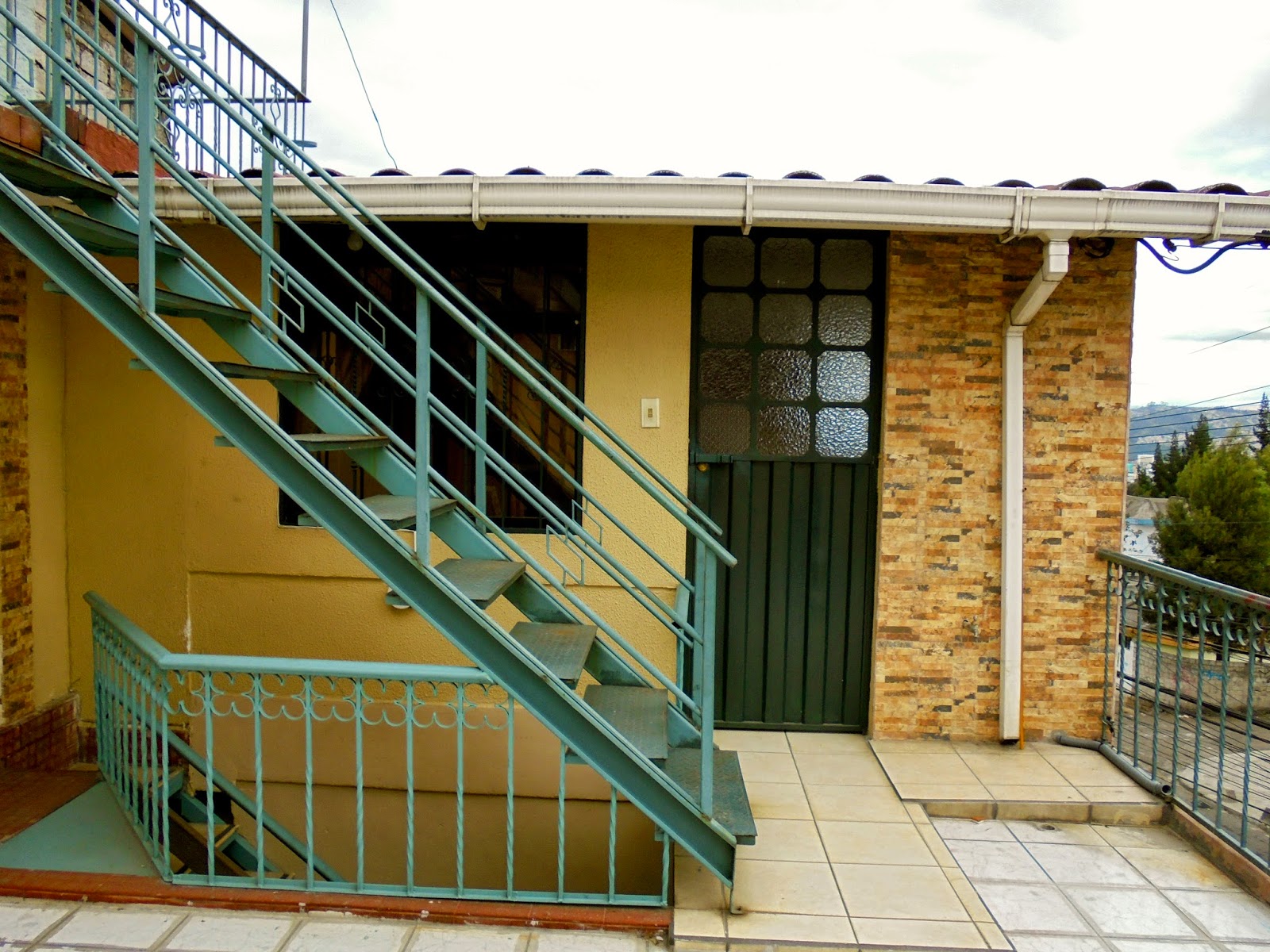 For the grand finale here is the inside of our small but really cute apartment. This is the kitchen which you immediately see as soon as you enter through the front door. Well, there is only one main door but you get the idea. Everything you see in the apartment came from us, I wish I had taken the "before" and "after" pictures just to give you an idea of how much work we put into this place to make it look as it does now. 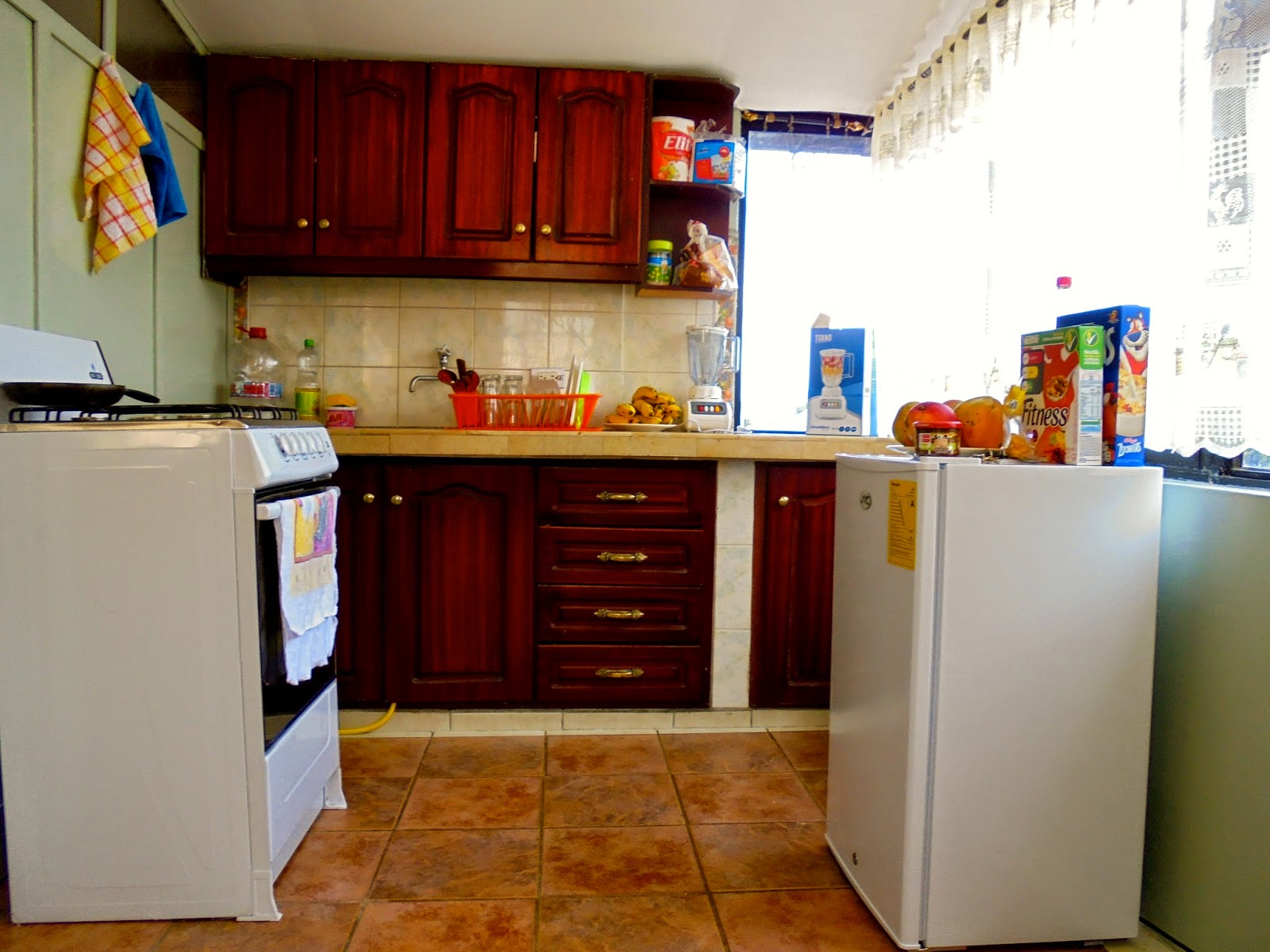 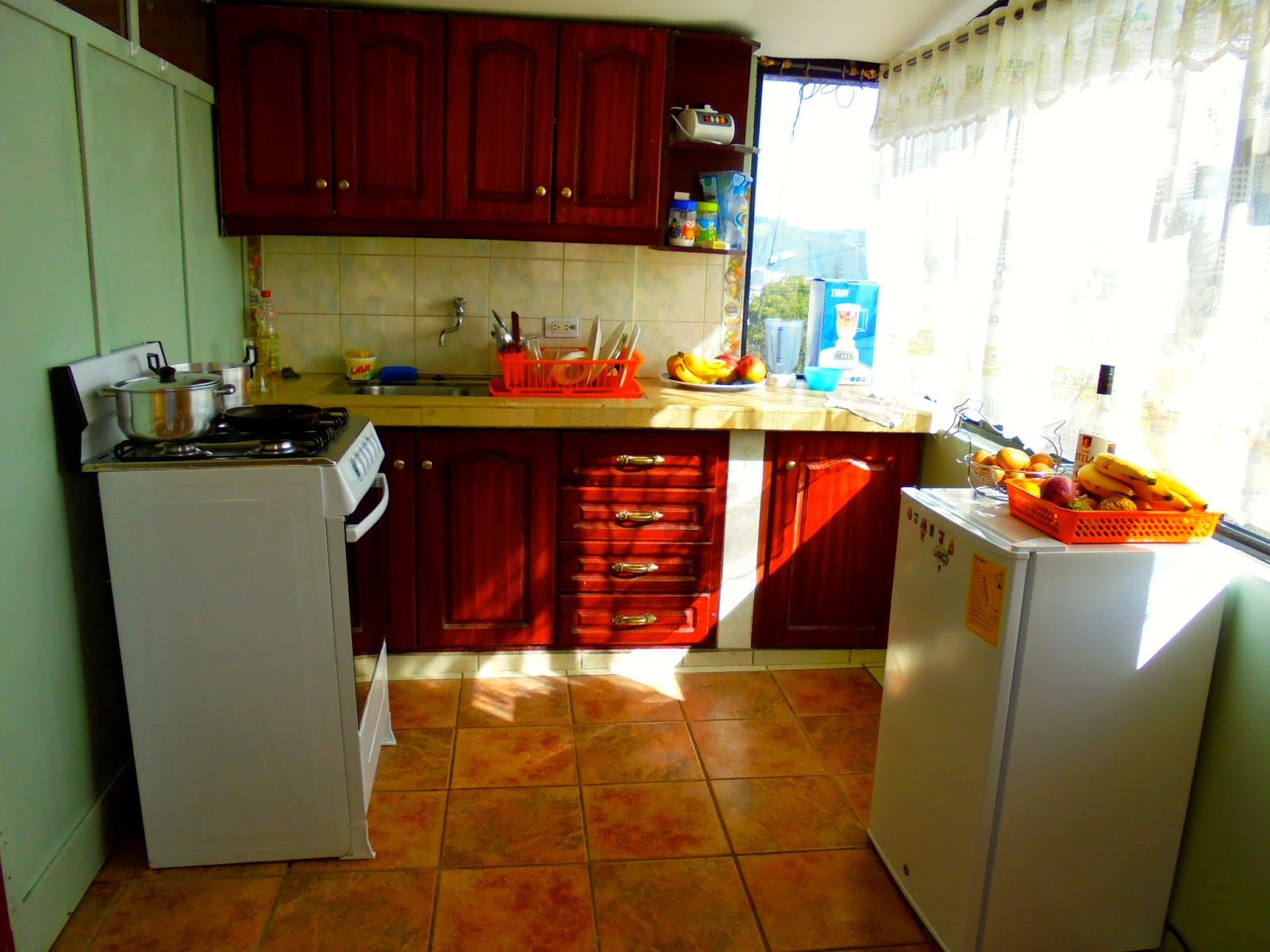 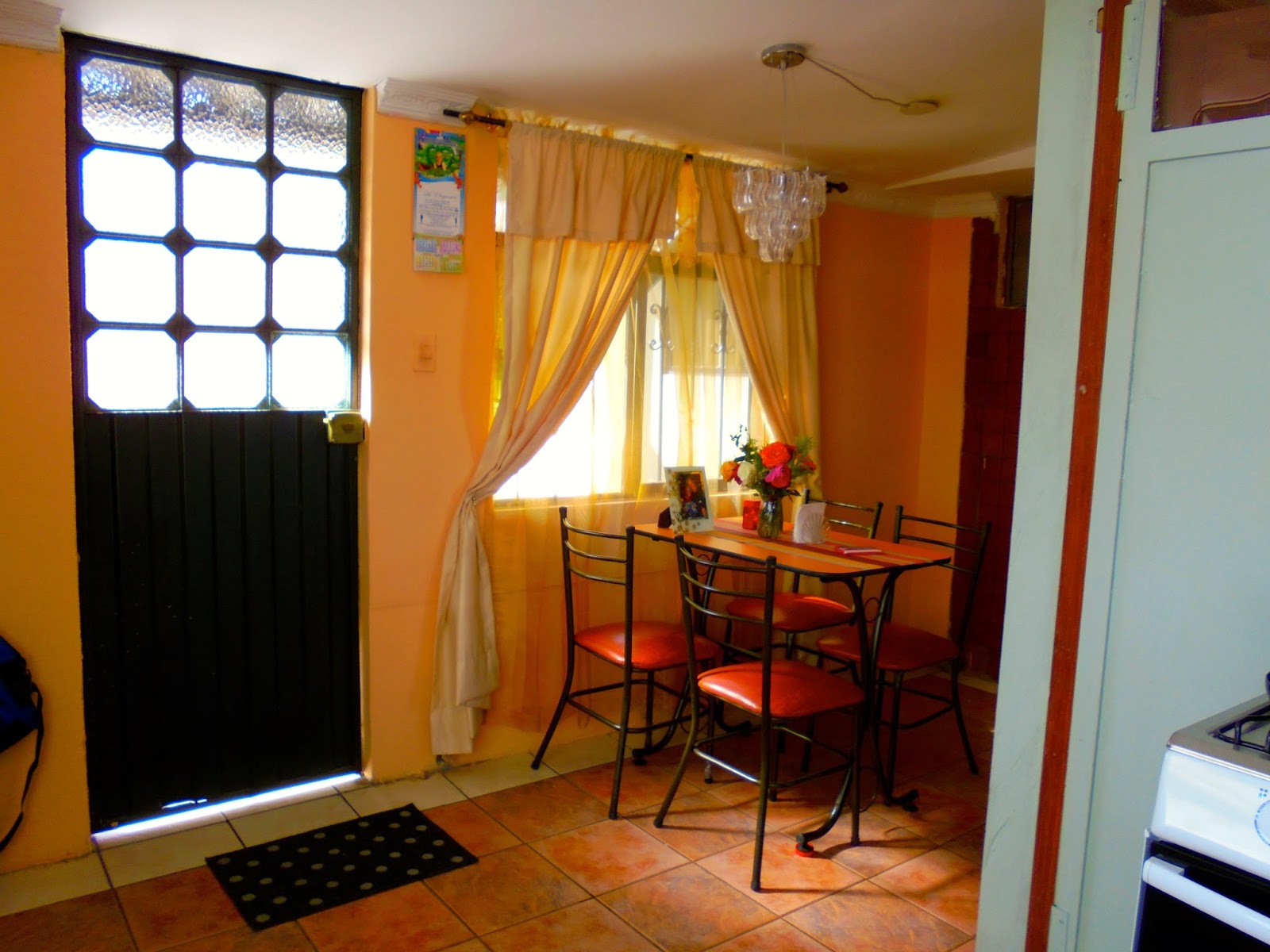 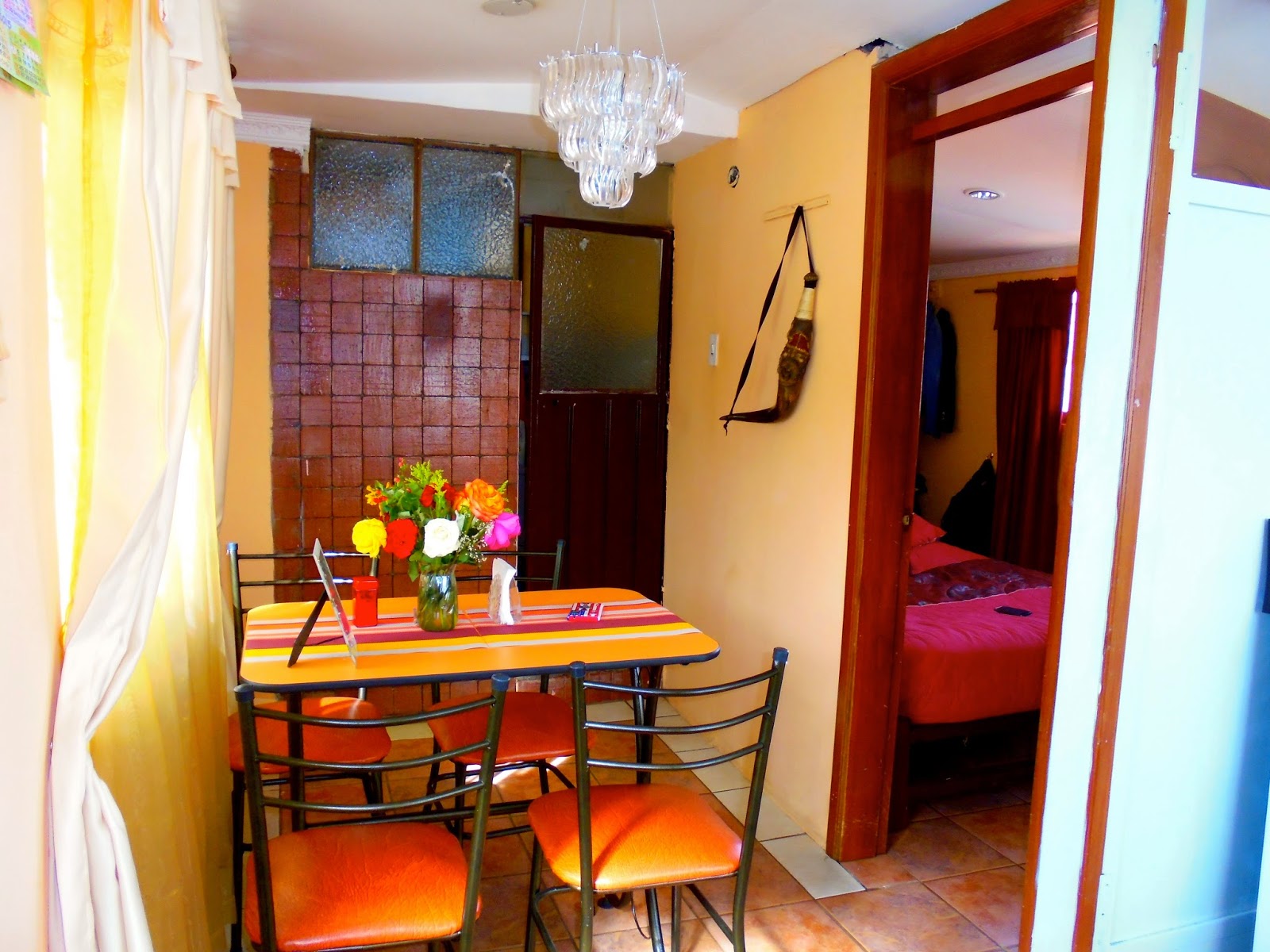 The bathroom, it is small but thank goodness it's clean and was in good condition when we moved in, I can not stand filthy grimy bathrooms. 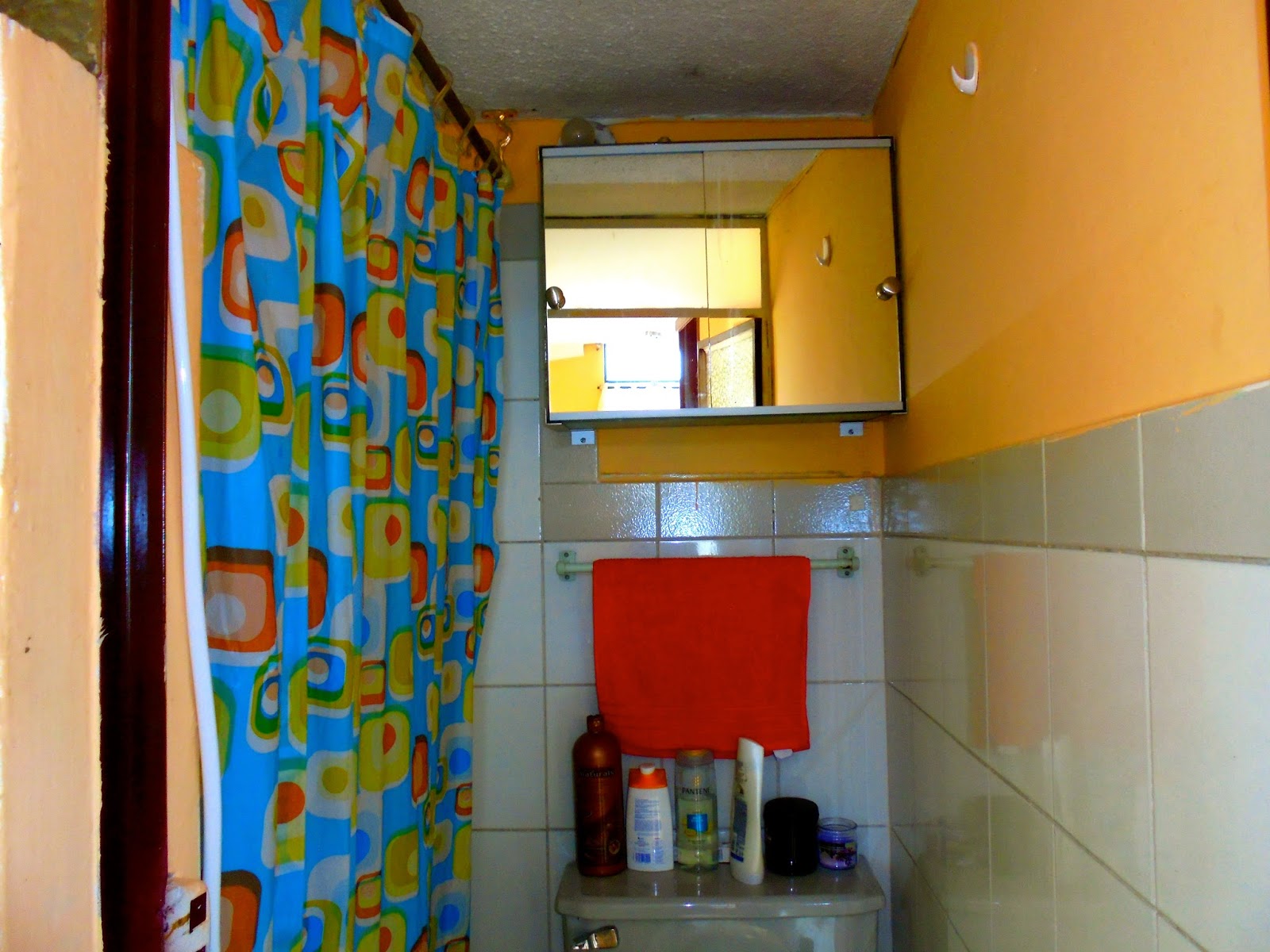 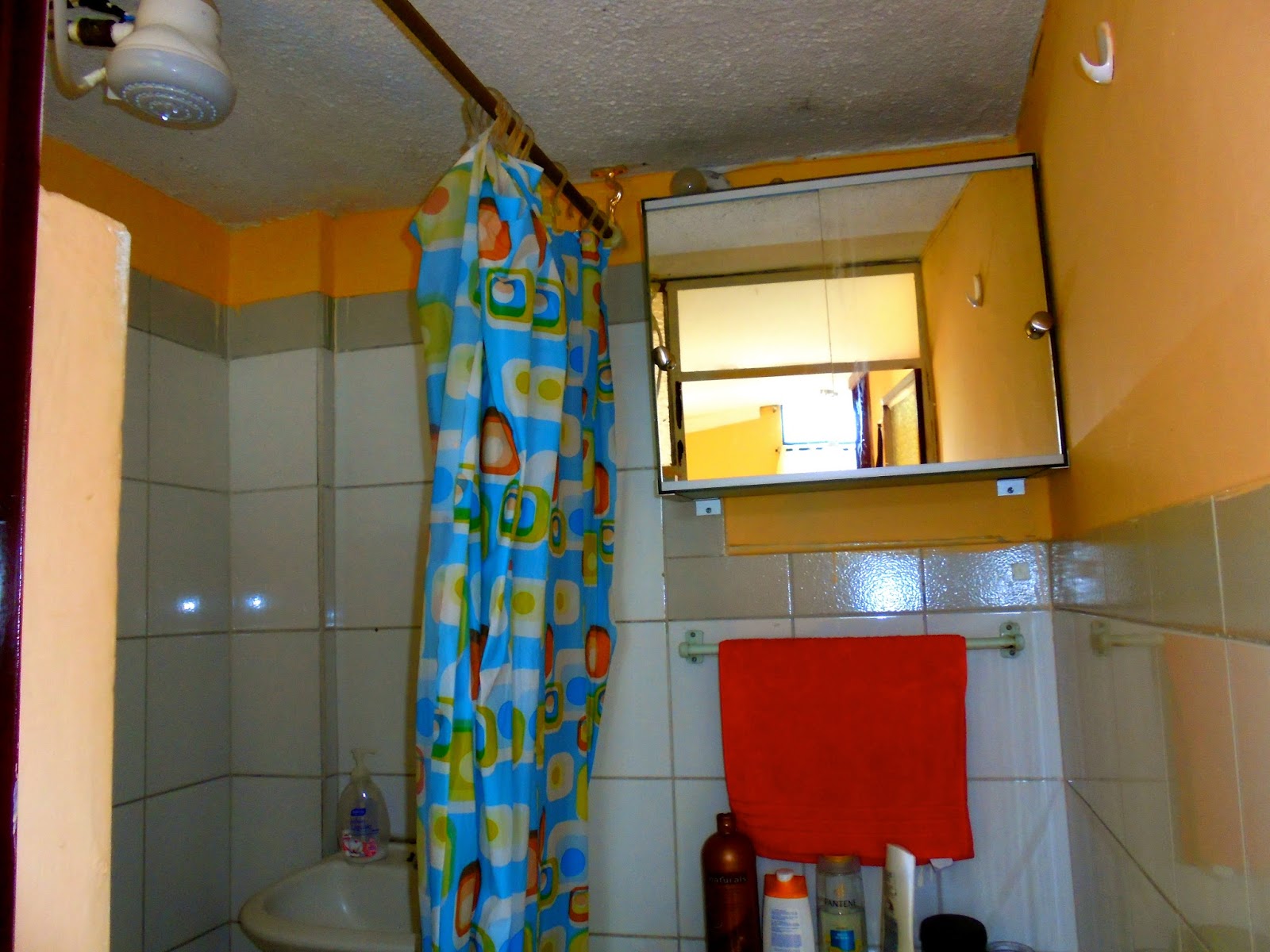 The view from our front door, isn't he just lovely? Ooh! we were talking about the actual view right? check out those mountains, lovely! right? 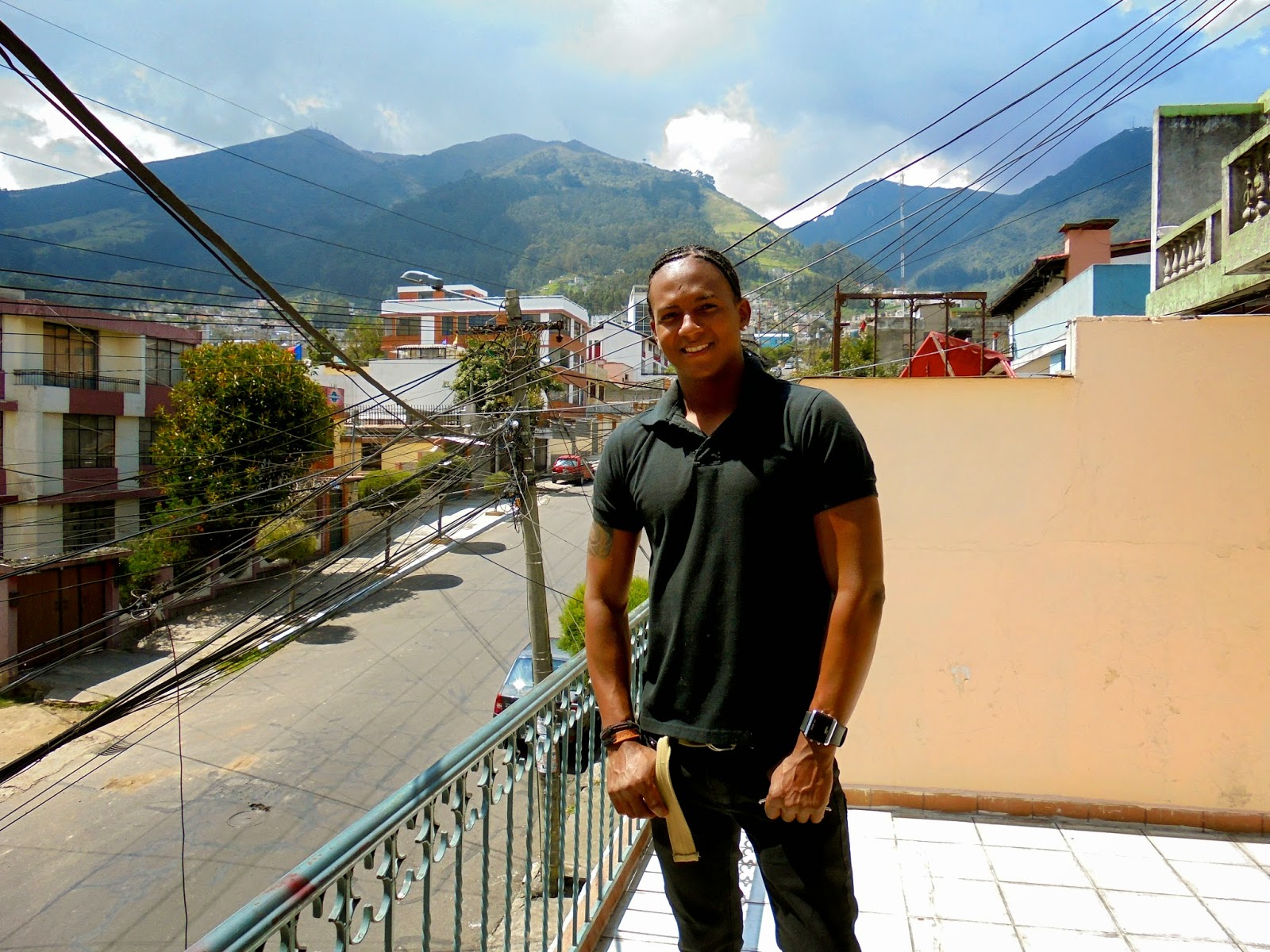 We live in the upper floor so we get really good views of the surrounding streets plus we get more than enough natural light which brightens the apartment during the day and ensures it's always warm. Nothing fun about living on the lower floor where it's colder and without much light. This is the view from our balcony. 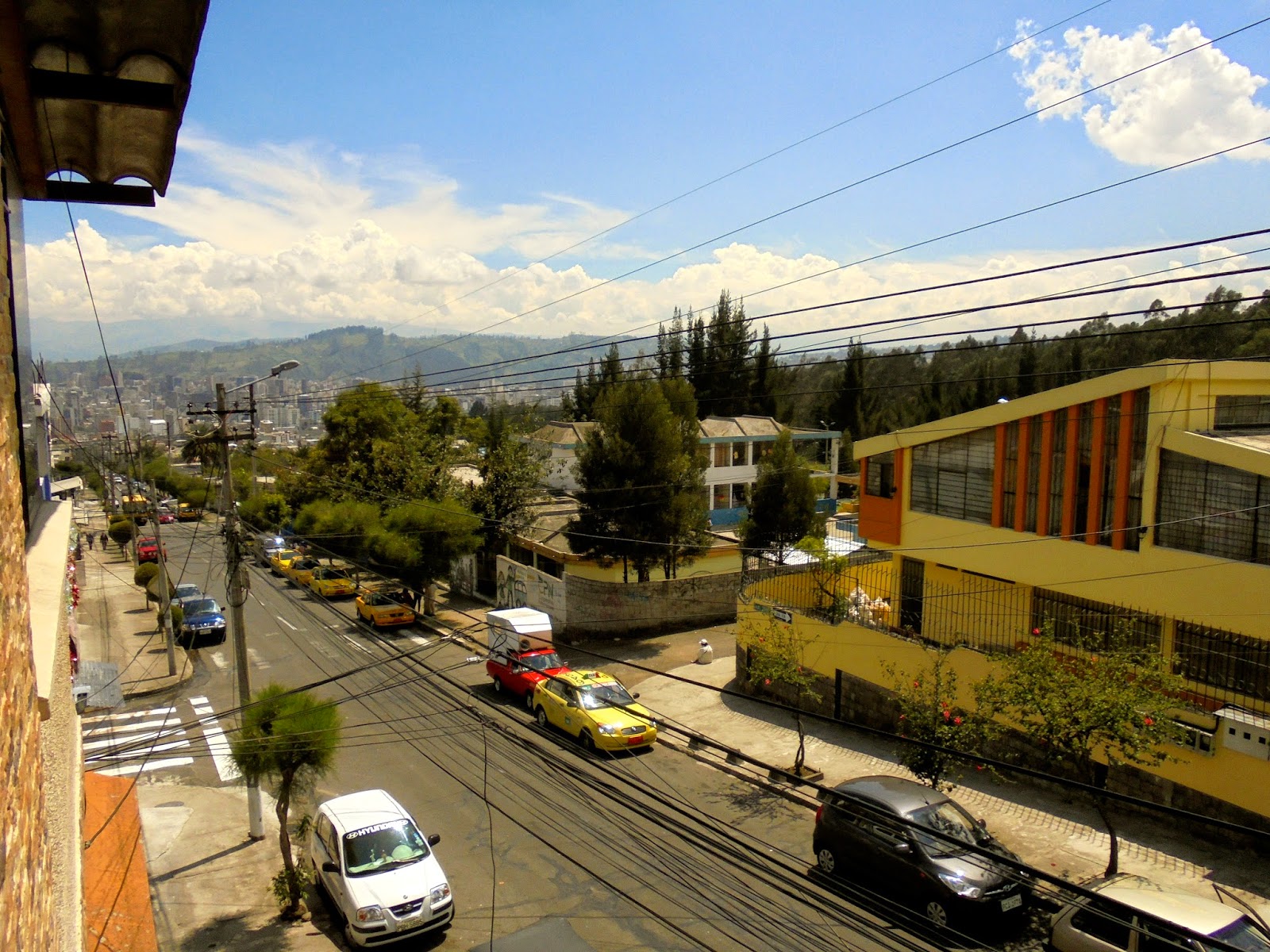 That's it folks, we both love our new place and couldn't be any more happier. I just love how cosy the place is and since it's only the two of us, the size suits us just fine plus with $130 that we pay in rent we can't really complain. Its way cheaper and prettier than the other apartment we lived at. Ooh! and we have a very friendly neighbor who lives next to us that has become buddies with my boyfriend, he offered to share his internet with us for $10 a month. Good deal if you ask me!

The caretaker from the other apartment tried robbing us of our deposit, the nerve of that idiot. Thank goodness I had made sure we had a solid contract in place which had taken a whole month for him to sign because he kept dodging me. I swear you can not leave anything to chance.

It's very unfortunate the way people here will try to rip you off at any given opportunity. I remember prior to coming to Ecuador I was talking to this one guy in Colombia who told me he didn't like Ecuador because he felt like people were out to rip you off and get whatever they could from you. At the time I thought he was being too harsh in his judgement but now I totally understand what he meant. Don't get me wrong, it is a beautiful country with so much to offer but I have come across so many shady characters that have left a very bad impression.

Remember the Tienda I had mentioned earlier? next to our apartment entrance where we buy small stuff for the house? the couple that own it is an elderly couple and when I say elderly I mean they are pretty well advanced in age. The woman is friendly but her husband is grumpy and mean, dude actually tried ripping us off! it's a long story but we went to buy something from the shop and he was trying to quote a higher price, good thing this nice neighbor who was present at the time pointed out the price discrepancy. I swear the audacity of some people! I just kept thinking, "seriously at his advanced age shouldn't he be making peace with the world before his last days instead of trying to rip  people off?"

So our neighbor next door was giving my boyfriend heads up on which neighbors to watch out for & avoid and which ones are friendly. You should see the two of them talking on the balcony like two best friends, its actually really cute and funny.

Apartments here are referred to as departamentos, you can say apartamentos too but the former title is most commonly used.